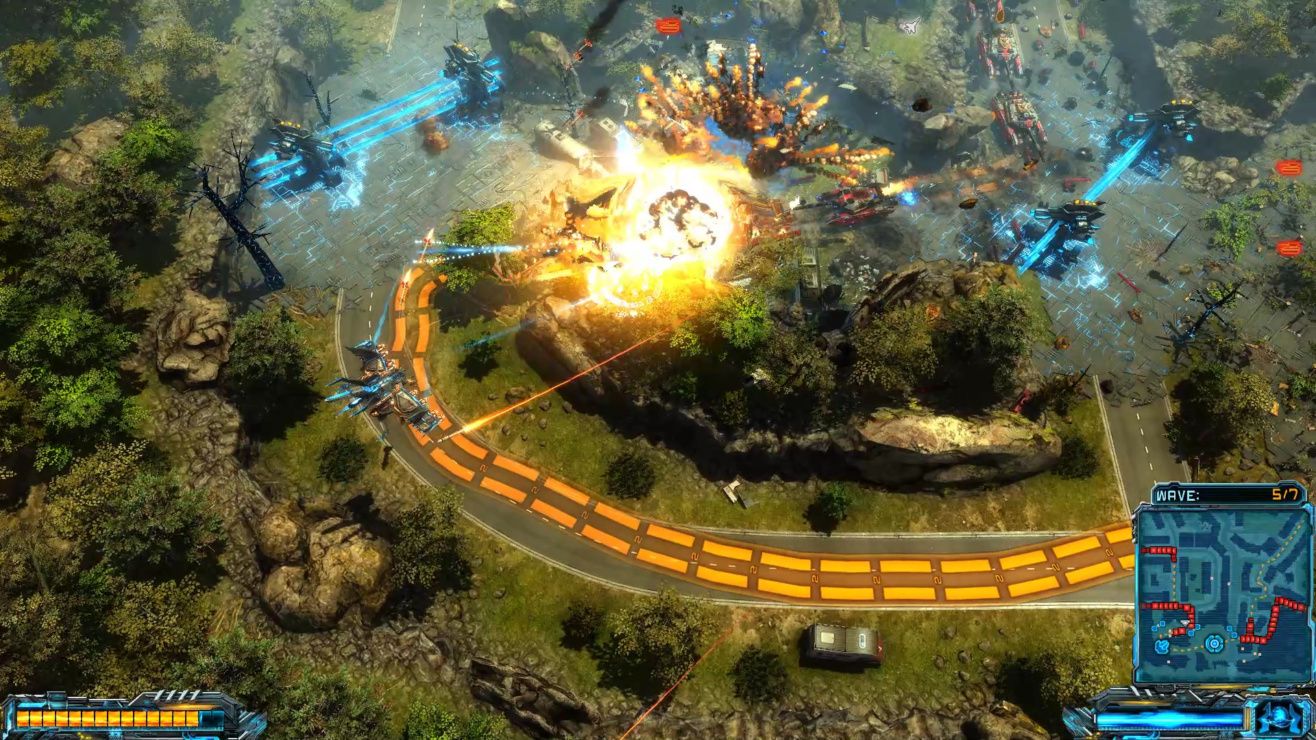 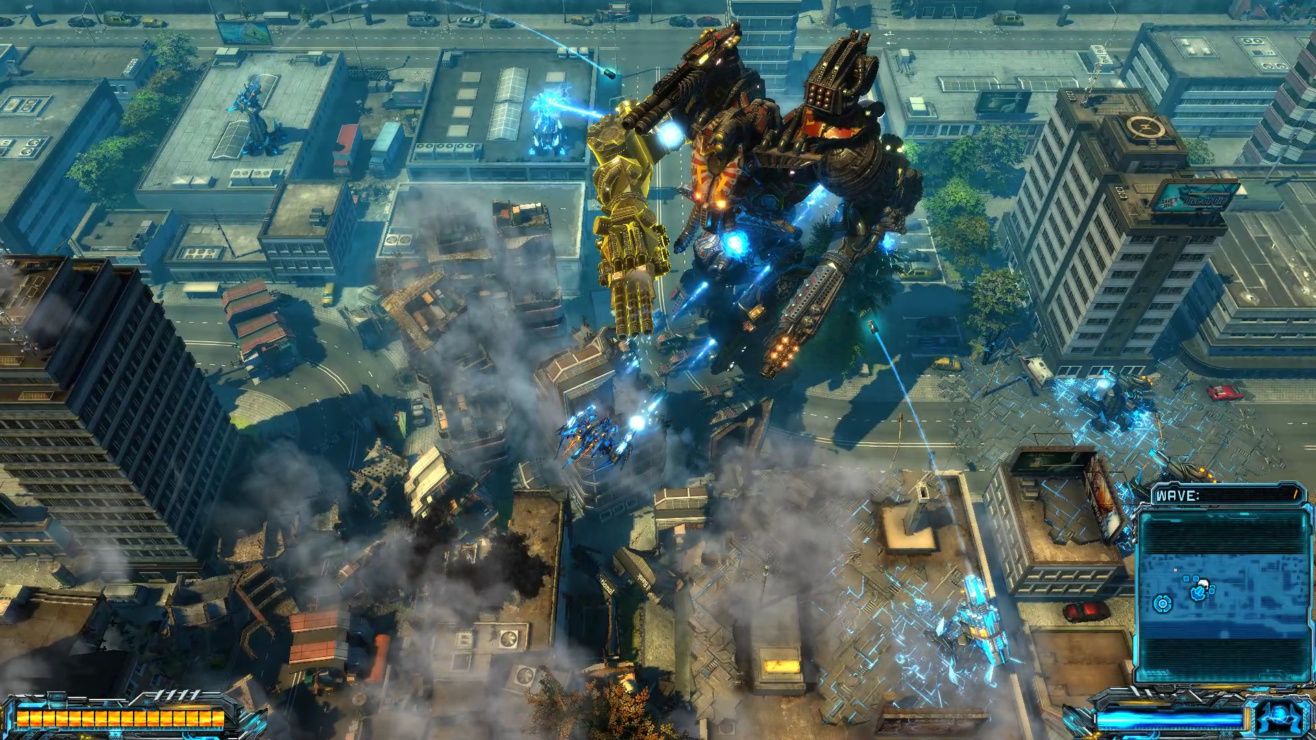 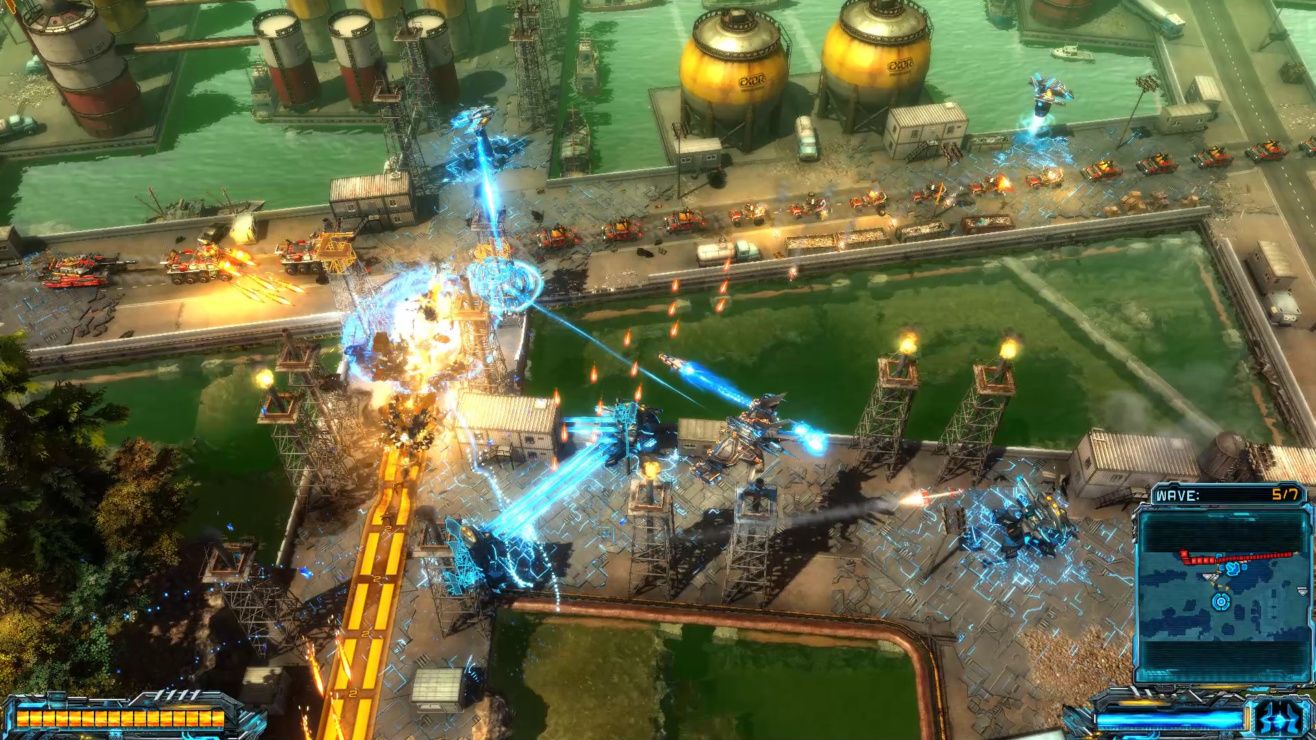 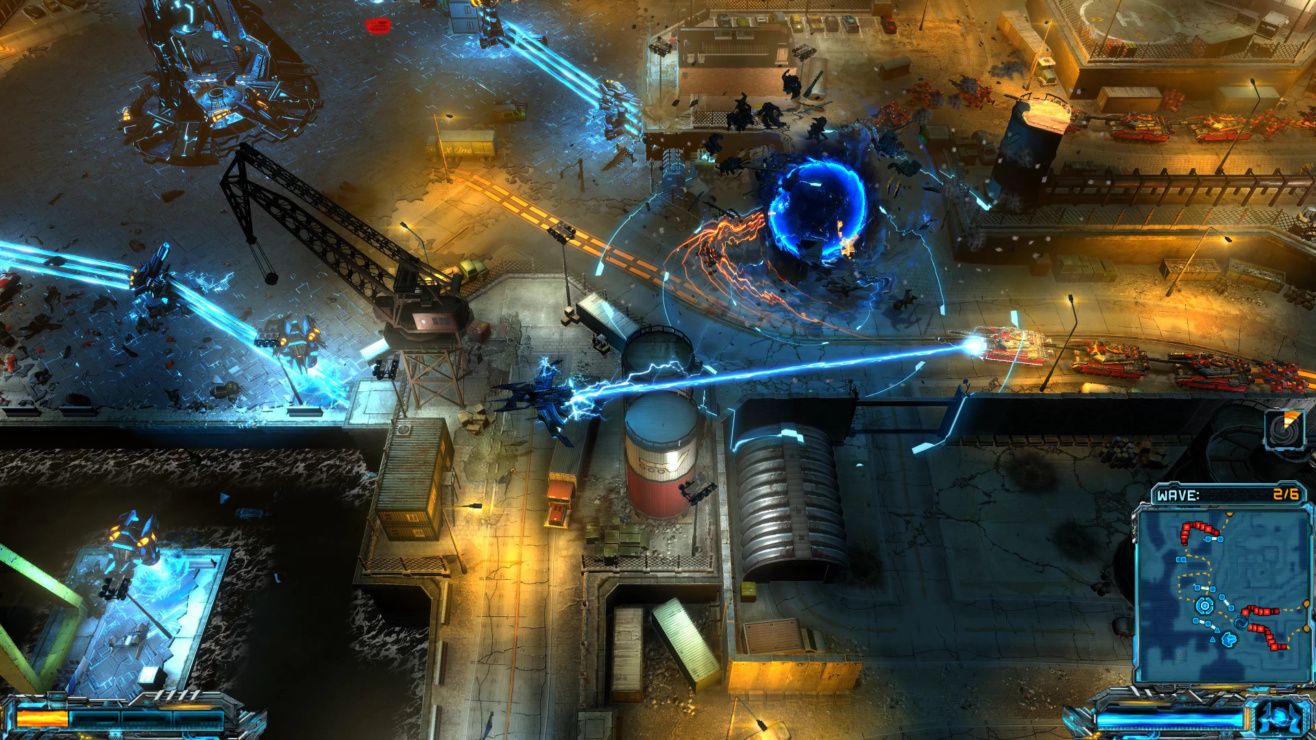 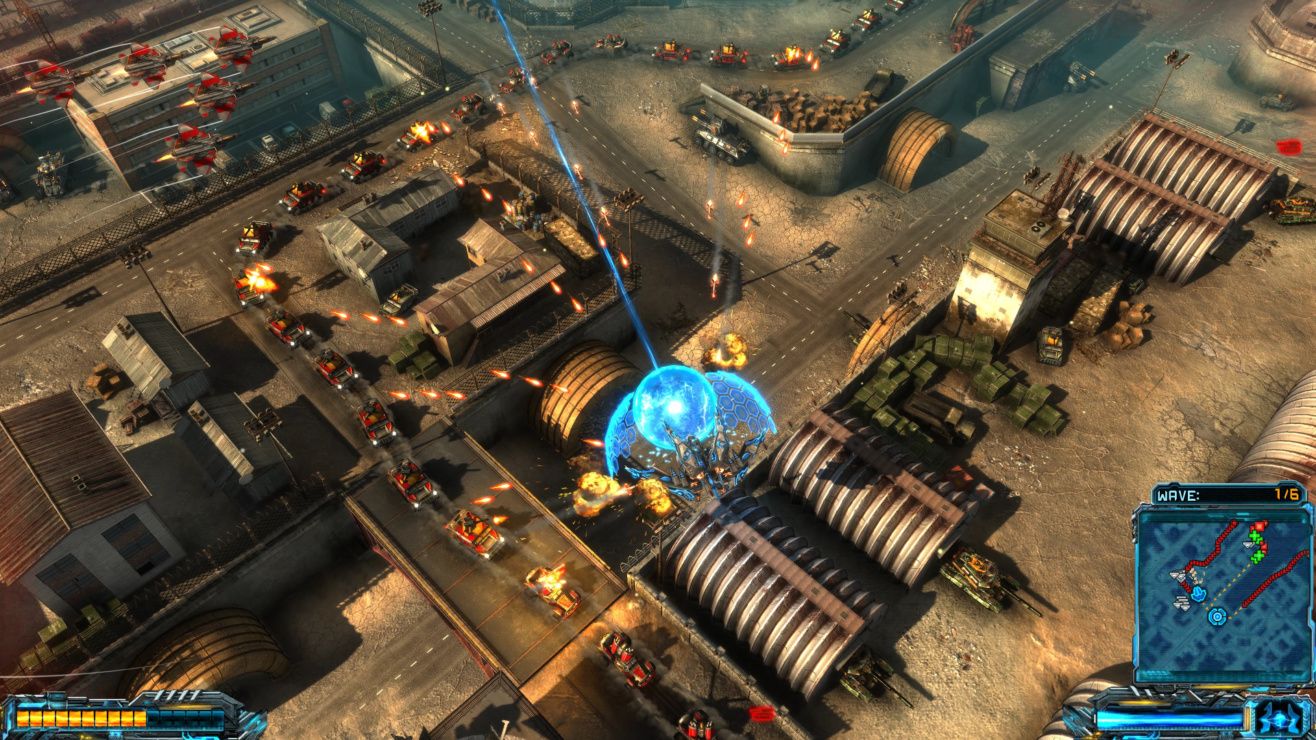 action aliens co-op futuristic indie sci-fi strategy
Unique fusion of a top down shooter and tower defense strategy. You are the X-Morph - an alien species that invades Earth to harvest its resources. Strategize in the build mode by carefully selecting various types of alien towers or throw yourself right into the battle. Build mazes for incoming enemies in an environment that provides exceptional planning freedom. Tear down buildings and collapse bridges to support your defense or to simply indulge in a spectacle of unprecedented destruction. Possess a range of unique alien weapons and use defense strategies like you've never seen before in this game genre.
Share Share Share
Promote for 50G

Honestly, this was the best game released in 2018. I played it for countless hours on Xbox and got all the achievements soon after the release. A year and a bit on, having moved to PC/Steam, it was one game I literally yearned to have in my library again and not just because it was passionately made on a custom engine that makes everything feel riper than a fruit farm come picking season. I mean that all helped, but it's because of the gameplay.
Whether you're using a mouse and keyboard or a controller, the gameplay is just brilliant. If you want something fun, something as intense or easy as you make it on yourself, something that will make you think and improvise on the fly, with that high octane RTS feel, while embodying splendid shmup and tower defense elements, well man, this is the game for you!
With all the AAA trash released these days, you owe it to yourself to finally put a magnificently crafted game on your screen. So do yourself a favor and at the very least install the Demo. Thank me later. ;-P

Had really fun playing this game for the past few days, definitely one of the most satisfying Tower Defense game I've ever played.
X-MORPH has really great graphics effects far beyond my expectation , explosions and water especially , reminds me of RED ALERT 3.
Nothing more to say but try it yourself ,really cheap on discount.
I'd be sure to ask my friend to join me if there were online COOP instead of local split screen.Hoping to see this feature coming out in the future.

this is a shining example of a game that really gets it all right.
The shooter gameplay is tense, frantic, and exciting, with ship powerups (researched via the tech tree, not from drops in battle) allowing you to easily and quickly switch between weapon types that fare better against certain enemy groupings. You will be very active in destroying enemies, as your towers are quite good but not enough on their own.
Towers too have a considerable amount of upgradability as you play, and become more effective when used well. Pathing control is a must, and at times the paths will change or the map will open up - but the game never leaves you in a bad situation here, because it is always announced before the wave during your unlimited time preparatory period, and they thoughtfully made it so you never actually lose resources in a game map - sell towers freely, move them however you want, you'll always be able to get the energy back and make more if necessary or place them elsewhere. The tower defense side is very, very thoughtful and rewards careful consideration of enemy paths and what options you have to route them differently. It has free seeming placement by using a grid system for the whole map, so you're not just locked into pre-determined tower locations or anything like that.

Have to say I was skeptical of a TD/bullet hell hybrid but it actually works out pretty well. This is primarily because I'm not good at bullet hell games, but ultimately the game does not require a high level of skill since you can "cloak" at any time and become invincible (though you can't deal damage in this form).
X-Morph allows the greatest amount of pathing I have seen in a TD game and you have tons of flexibility to route enemies everywhere since there are no set number of tower placement spots. You can choose to have a couple really powerful ones and a short path, or many weak towers forming a longer path.
I also liked how the game is kind of forgiving on core damage (ie, the equivalent of enemies escaping into your base in other TD games). The core can kind of defend itself a bit and a tiny bit of damage does not mean you can't "gold star" the level.  I also think co-op mode (couch style) is pretty cool. Takes a decent amount of coordination on where to use resources to make towers and which paths each person should defend though.
I still prefer "pure" TD style games, but this is the best hybrid so far!
Overall 8/10.

One of the best tower defence games I have played. The battlefield constantly changes with new paths of approach and unit types, which makes you very conscious of the whole battlefield. It is a little pricey with the DLC, so I would probably wait until a sale.

imagine tossing a tower defense game and a shoot'em up into a blender, pushing the button and you get: this!
and it is delicious indeed.
excellent graphics, good sound & music and fully destructible environments make for exquisite carnage.
however don't expect to just sit back and enjoy the show. you will need to get your hands dirty as well. shoot at enemies, collect debris & wreckage and change your defense in a hurry when you get served a nasty surprise. playing the game can be quite stressful but you'll get used to that.
the maps are diverse and interesting with many tactical options and you can destroy almost everything. that's big fun and gives you the opportunity to change the enemies' attack paths and lead them to your kill zones.
also playing the bad guys for a change is fun as well!
the only thing i found kind of lacking is the progression system. you don't unlock any actual upgrades but instead you unlock towers, ship weapons and general perks that are locked at the start of the game. that feels kind of lazy but i guess there is no other way to properly balance a game like this with too many upgrade options.
finishing the game took 10 hours (without the DLCs) and after that i spent A LOT of time trying to get more achievements unlocked.
you can get a ton of fun and play time out of this game if you want to.
but if you don't care about survival mode, co-op mode, highscore hunting, unlocking achievements and all that you are done after about 10 hours.
hint: you don't need any of the DLCs to get 100% achievements. so that is a plus.