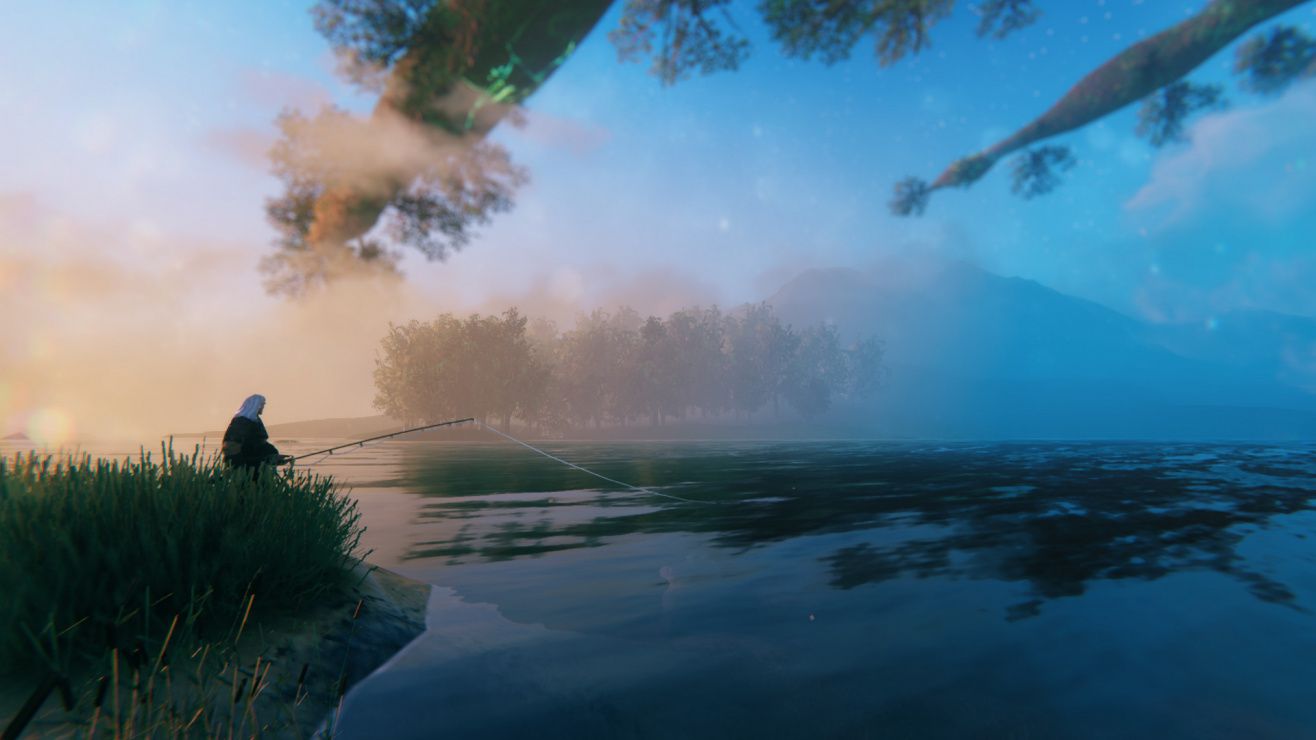 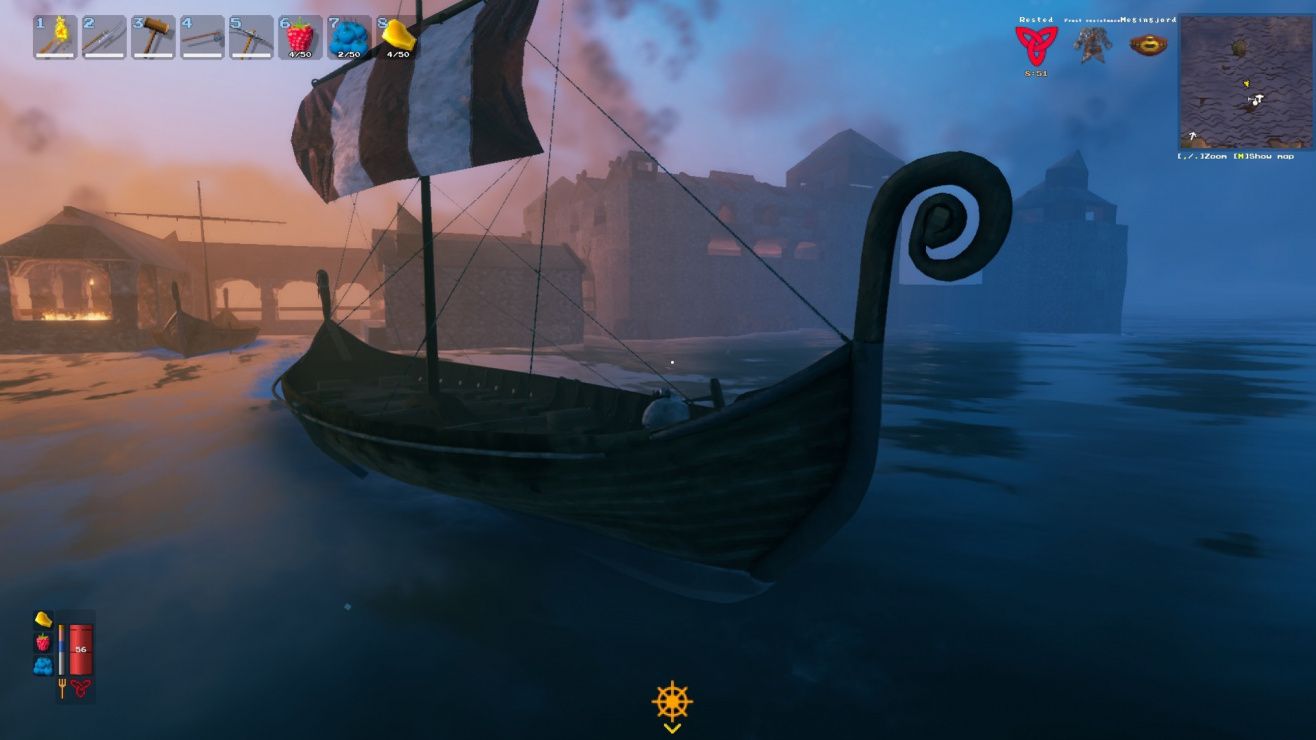 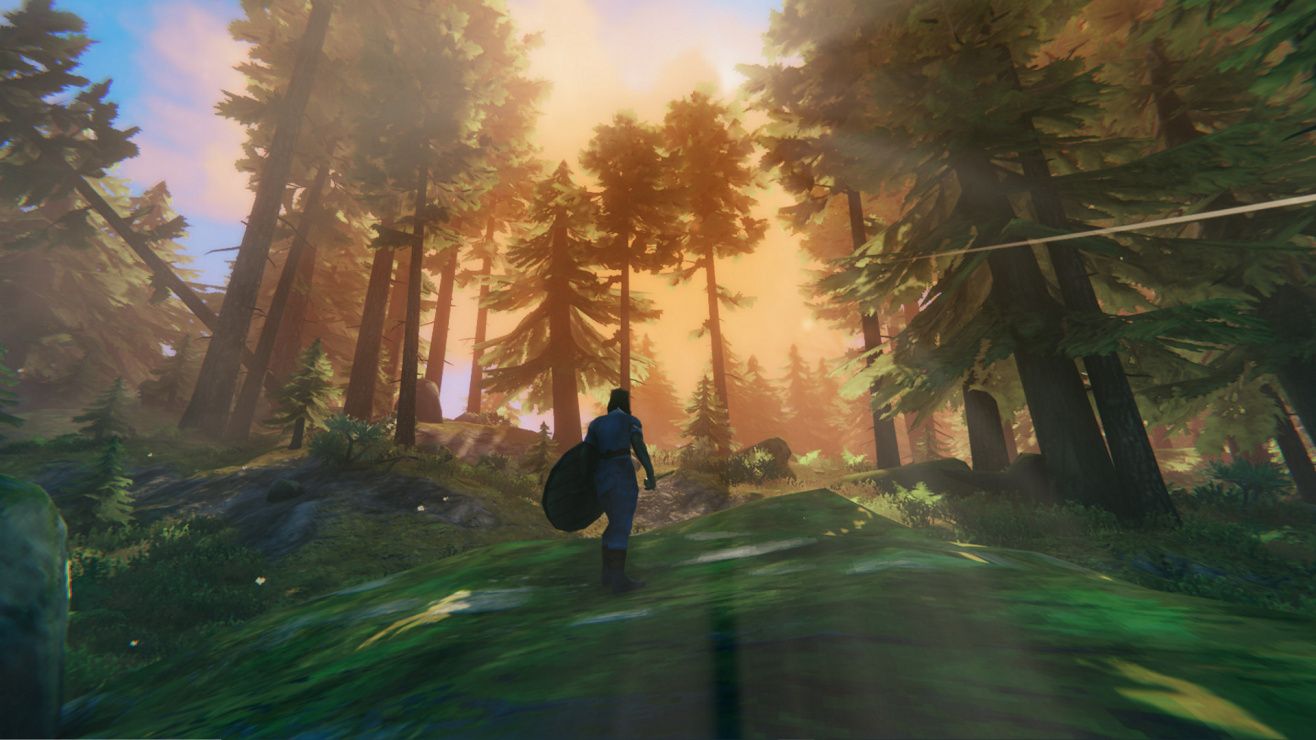 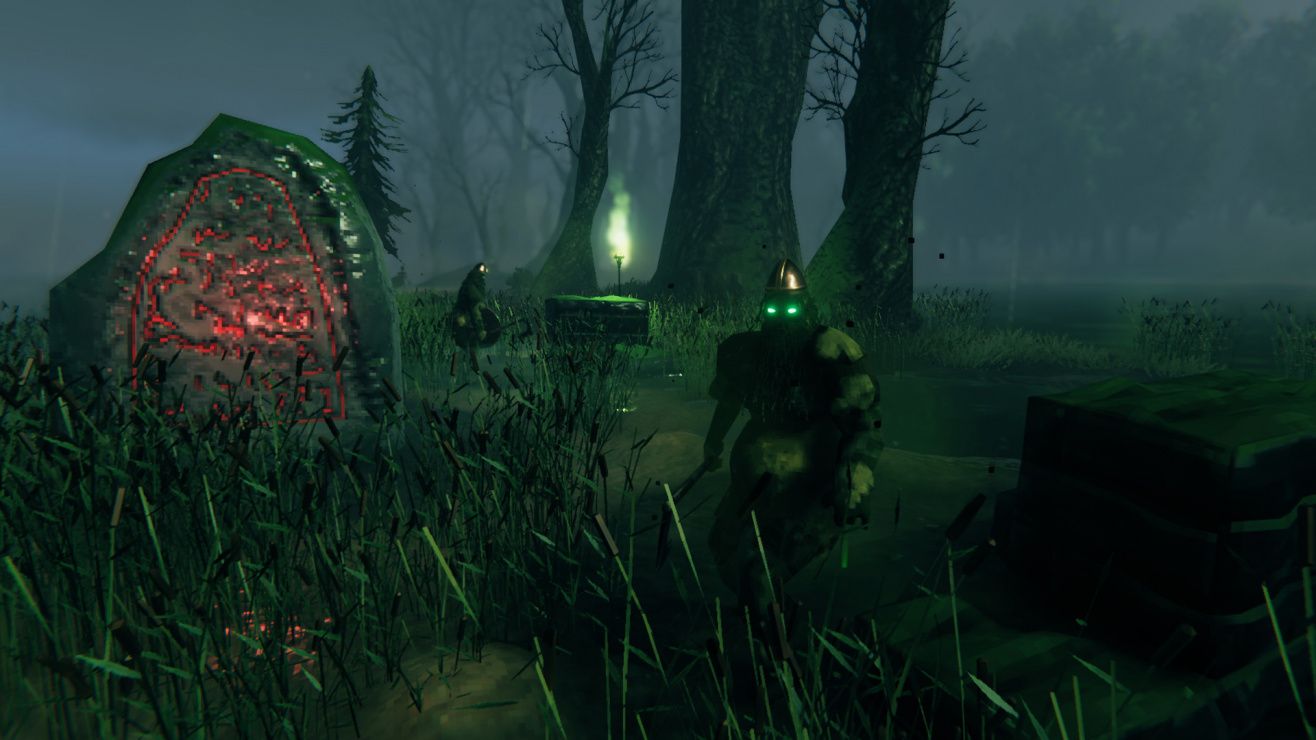 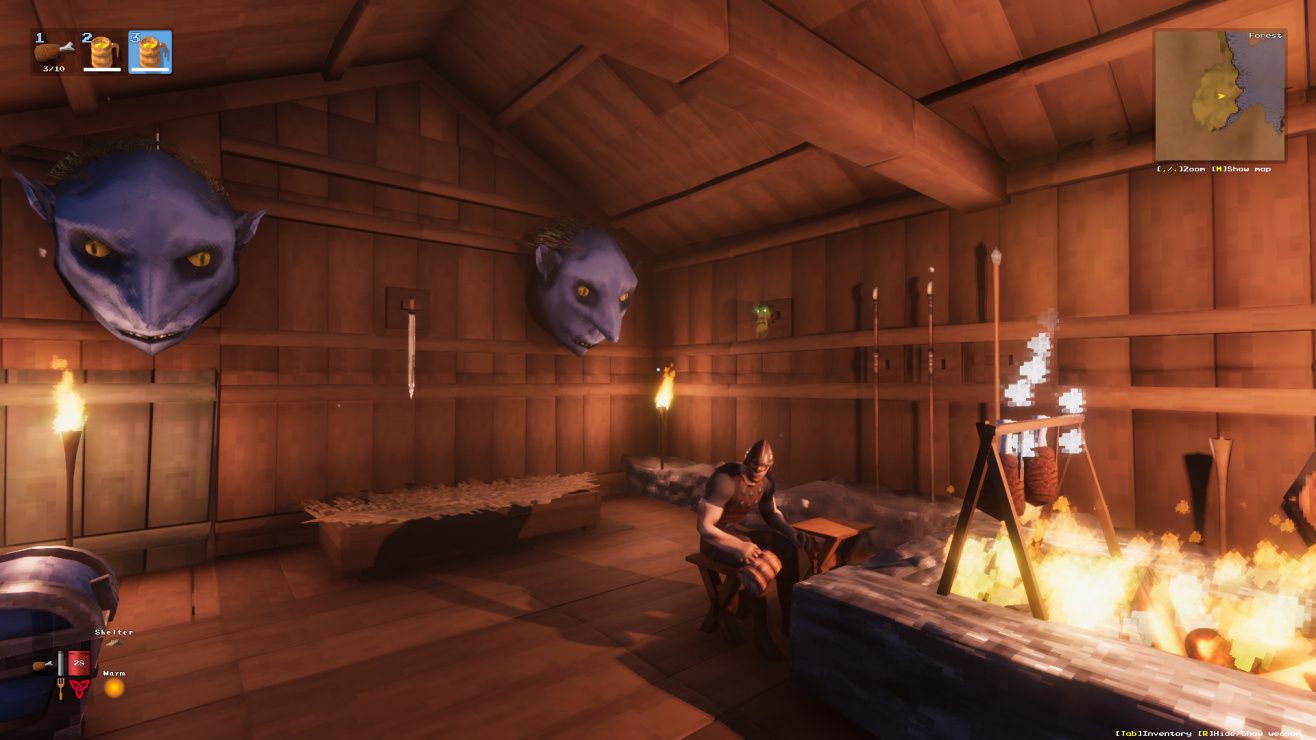 PC Steam adventure co-op survival medieval online nature sea craft vikings openworld
A battle-slain warrior, the Valkyries have ferried your soul to Valheim, the tenth Norse world. Besieged by creatures of chaos and ancient enemies of the gods, you are the newest custodian of the primordial purgatory, tasked with slaying Odin’s ancient rivals and bringing order to Valheim. Your trials begin at the disarmingly peaceful centre of Valheim, but the gods reward the brave and glory awaits. Venture forth through imposing forests and snow-capped mountains, explore and harvest more valuable materials to craft deadlier weapons, sturdier armor, viking strongholds and outposts. Build a mighty longship and sail the great oceans in search of exotic lands … but be wary of sailing too far... Key features: Huge procedurally-generated world - explore and inhabit mystical lands, from mysteriousforests to imposing snow-topped mountain ranges and stunning meadows, complete with their own creatures of legend to battle and wildlife to hunt. Co-op PvE (2-10 players) - - Whether you want to brave the lands alone or venture with trusted allies, Valheim supports independent, player-hosted servers and unlimited world creation. We recommend playing co-op with 3-5 players. Punishing dodge & block based combat system with a wide range of weapons Build & sail ships - from flimsy rafts to imposing warships, build legendary vessels to conquer the seas and discover new lands.
Share Share Share
Promote for 50G

I wanted to wait until I had 100 hours into this game to give it a review. I wanted to have plenty of time put into it with it being an early access title. I've played mainly solo, most games like this I do, just a personal preference until I have beat the game. This game is an early access, the only bug I have ran into is an item tooltip describing what the item is. The game feels completed even though it is not. You can’t say that for a lot of early access games now a days.
Let's start off with the Building aspect this game offers. The terraforming can take a little to get used to. You can’t just dig with a pickaxe underneath the layer above, you must take it all the way down. With you not being able to dig a cave, you must dig the whole area out and build in the area if you wanted to build an underground dungeon for example. You unlock building items as you progress through the game, I like this aspect, I suggest waiting until the final tier if you plan to build fancy. While building you must add support, just like in the real world, cool concept. You must be within a certain distance of a workbench, forge, or stonecutter while building. Certain building aspects require a different crafting table.
Now let’s talk about combat. Combat in this game can be very challenging if you are under geared. You can’t go from the tier 1 zone and expect to survive in combat in the tier 3 zone. There are creatures that can 1 shot you if you are not prepared. Eat the right food for more health and have the right gear for the zone on! The boss fights I enjoyed in this game. What more can you ask, fighting a deer with chains hanging off his antlers while metal music starts playing? Mobs from one biome will fight others from another! It seems skeletons will fight any mob even if they are from the same biome. It can be a sight to roll up on some greydwarves trying to fight the skeletons It can take time to acquire the materials to craft gear sense you can’t use a teleport with ore. This means you either walk, or travel by boat.
Traveling by boat can bring a lot of great views. Watching a storm while in the middle of the ocean, a lightning bolt dancing across the sky. Shortly after being able to watch the clouds dissipating, the stars shining with a purple hue in the sky can be mesmerizing. Some people may not enjoy the graphics of the game, say it looks too old. It’s the perfect art style for this game in my opinion. The physics in this game are amazing. You chop a tree down and it factors in slop, chopping direction and wind into its fall direction. There’s rain and snow fall in the game, which can cause you to become “wet” and “freezing.”
Crafting in this game is well done for the most part. In my opinion there is a few recipes that need to be tweaked. You shouldn’t need 20 of iron bars but only a small amount of wood to craft a bow for example. Drop rates for crafting mats seem well placed except of ancient wood, my opinion, it needs to be lowered to same levels as the other “special woods.” You can plant a garden, plant trees, tame animals to have quick access to furs and meat.
After many hours of crafting, combat, building, and exploring, a game that is 1gb (Yes 1gb!) has brought me a ton of fun. Reminds me of the first times playing Minecraft or Terraria. I’ve been looking for a game to bring that feeling back.
All in all, I highly recommend this game to anyone who enjoys these style of games as I do! Please if you enjoyed reading this or found it inciteful upgrade this review!
I’ll see you in Valheim!
I just want to say thanks for all the awesome feedback of my review.. sorry I live in Texas and have been without power for 3 1/2 days. You guys are awesome.. thank you so much for reading!

It's criminal that a team of 5 people can build such an amazing game like this and sell it for $20.
I continue to be amazed at the thought that went into this game and all the little details. From the changing weather, the waves in the ocean, the ebb and flow of the water along shorelines, the smoke from the campfire as it fills the room, the ease and simplicity when it comes to building, the way the trees fall, the music that feels seamless and relaxing, and so on.
I truly appreciate that they didn't make an "open world simulation that simulates things for no other reason than to simulate them". Made a mistake while building that house? No worries, just remove it and get all your materials back. Ran out of food while busy building or crafting? No worries, you're not going to die from hunger. Broke your axe? No worries, just repair it. Troll smashed your cart full of ore? No worries, just put down a workbench and rebuild the cart and put everything back in the cart.

It got a crafting/boss progression similar to Terraria.
It has Dark Souls-like combat and punishment for death.
It got world/biome generation similar to Minecraft.
It got textures like a PS1 game.
It got lighting like a 2020 AAA game.
It sounds weird, but it's absolutely fantastic!

i'm a 63 year old gamer. Been playing since 1977 when the Atari 2600 came out with "Pong" as the big thing. I have primarily enjoyed open-world exploration games, like Oblivion, Skyrim, and Fallout4, which I have played many hours on. I have already done 555 hours on Valheim, which has some the most amazingly beautiful, realistic, not to mention dangerous biomes I have ever seen, despite the low detail. The different climate effects mixed with the lightling and weather are superb, And the sound effects are so realistic, especially the lightning and thunder storms. The crafting and settlement building along with you picking where you're going to settle is so great! Definitely one of the best games I have ever played!

I don't know how these devs did it, but I haven't felt like this playing a game in a really long time. It's a true adventure.
So much depth created in a 500mb game. Buy it.

Has more game play, less bugs, and is polished better than most AAA games while still being in early access. I would pay $40 for this game, keep up the good work devs! My life is consumed by this game. I don't remember the last time a game kept me up late, couldn't fall asleep because I was thinking what I would do the next day, and get all my irl s*** done for the day so I have plenty of time to play later on! I wish I could hug you and thank you in person for giving me back my love of video games, which has been gone for some time!!!

I never thought I'd see the day where 6 Viking Warriors, resurrected to fight for Odin's Honor would all die from a single mosquito. We had to sit around the campfire and come up with a strategy for literal bugs.
10/10 would lose dignity again.
Side note, please don't look up guides on this game. It's so much more enjoyable exploring and learning on your own. Have fun!