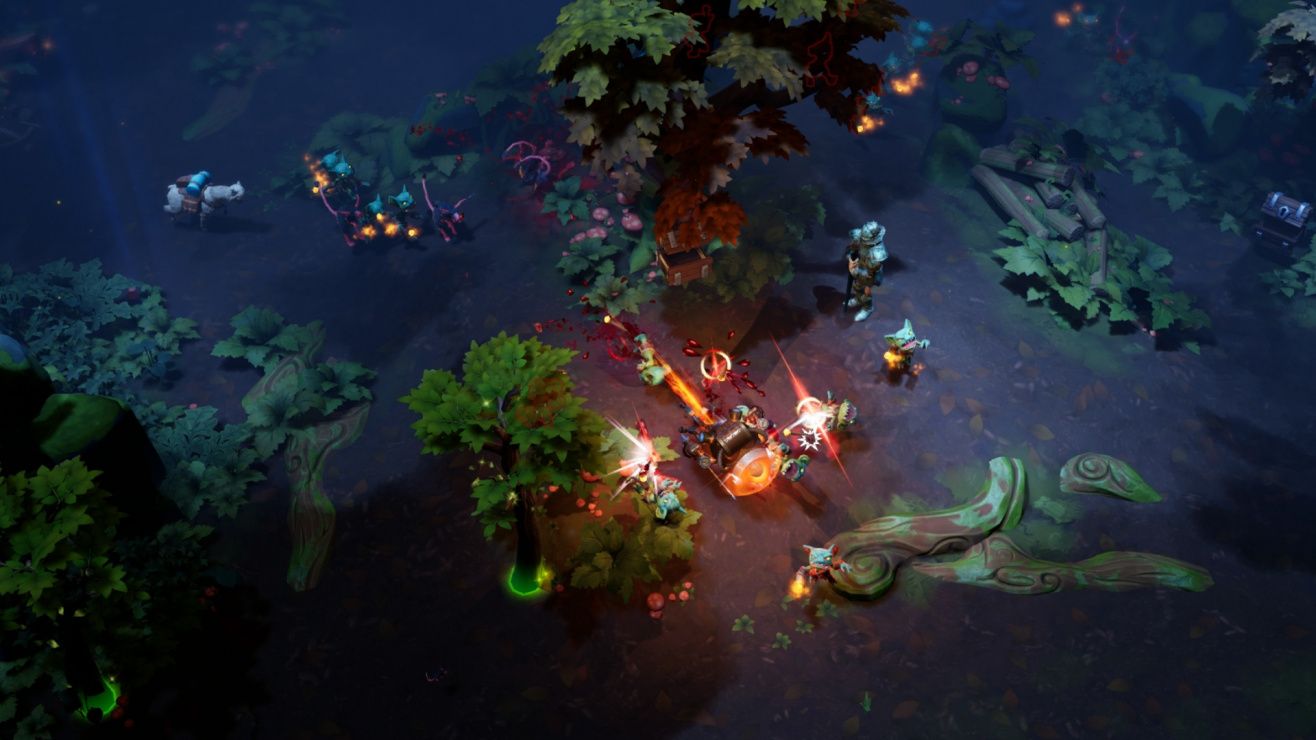 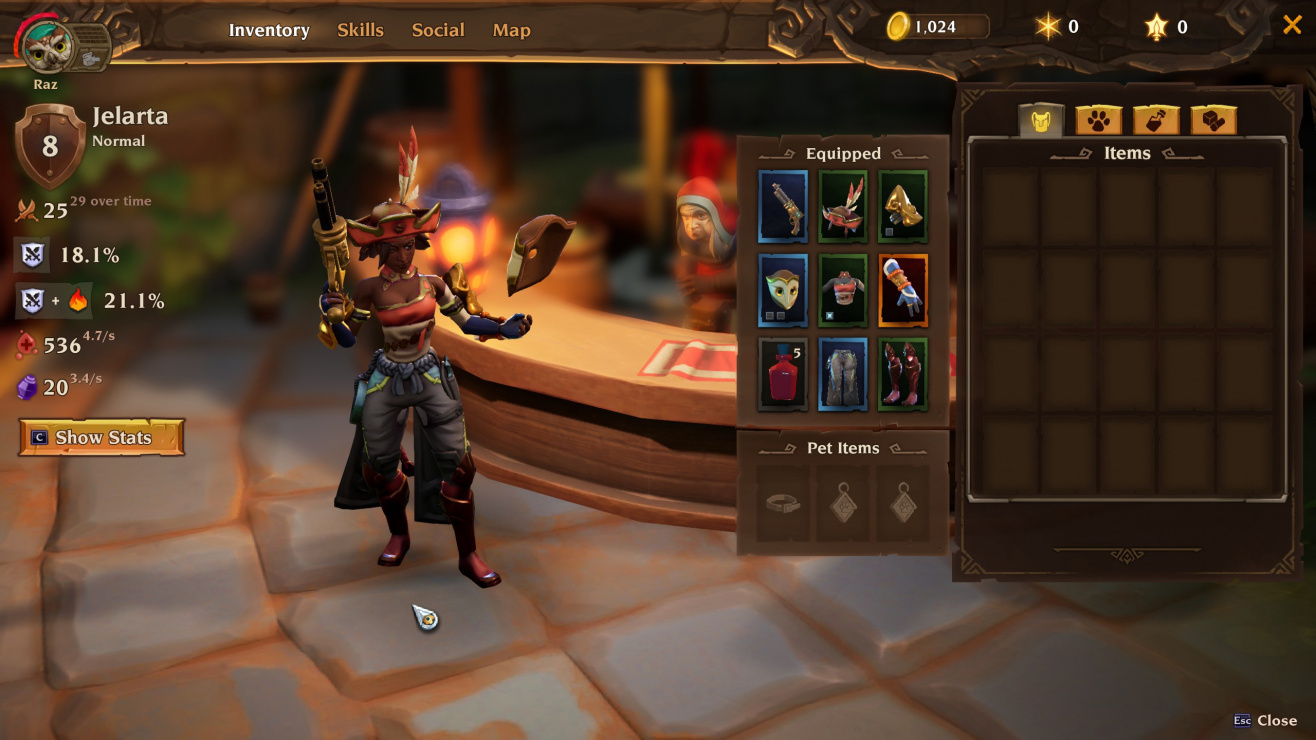 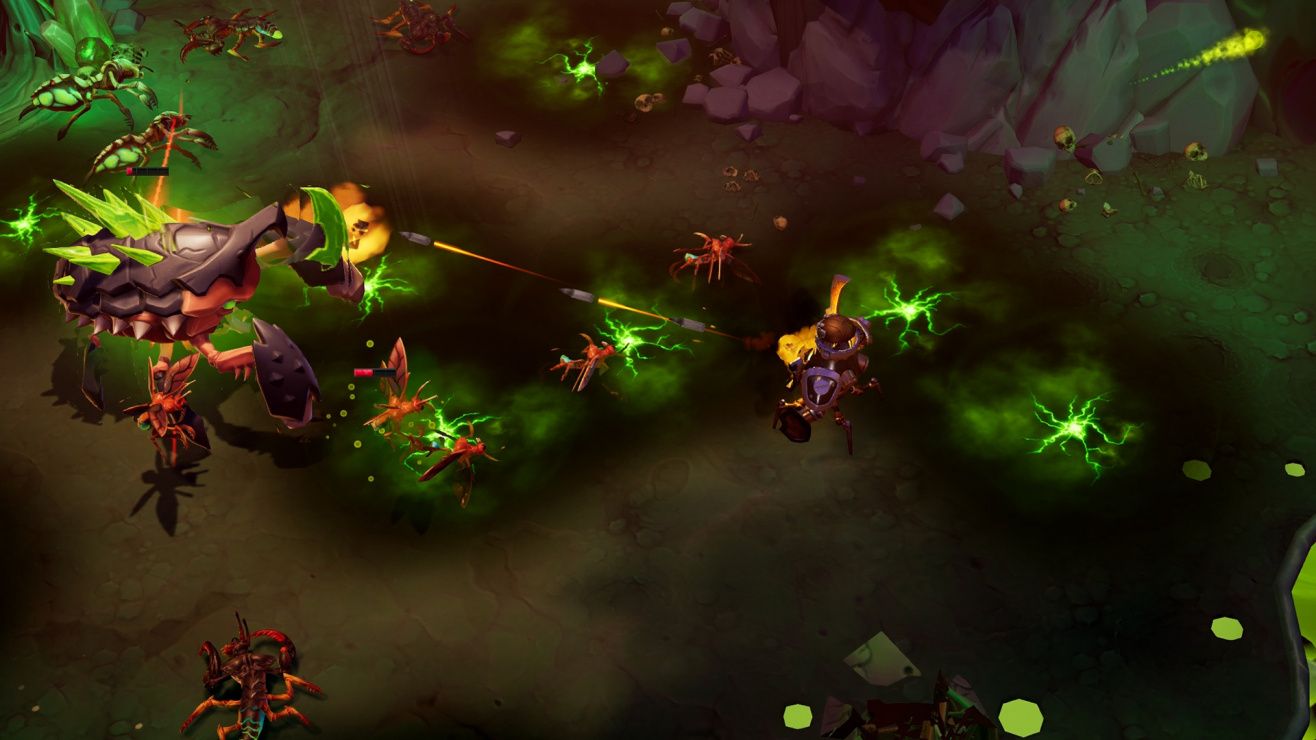 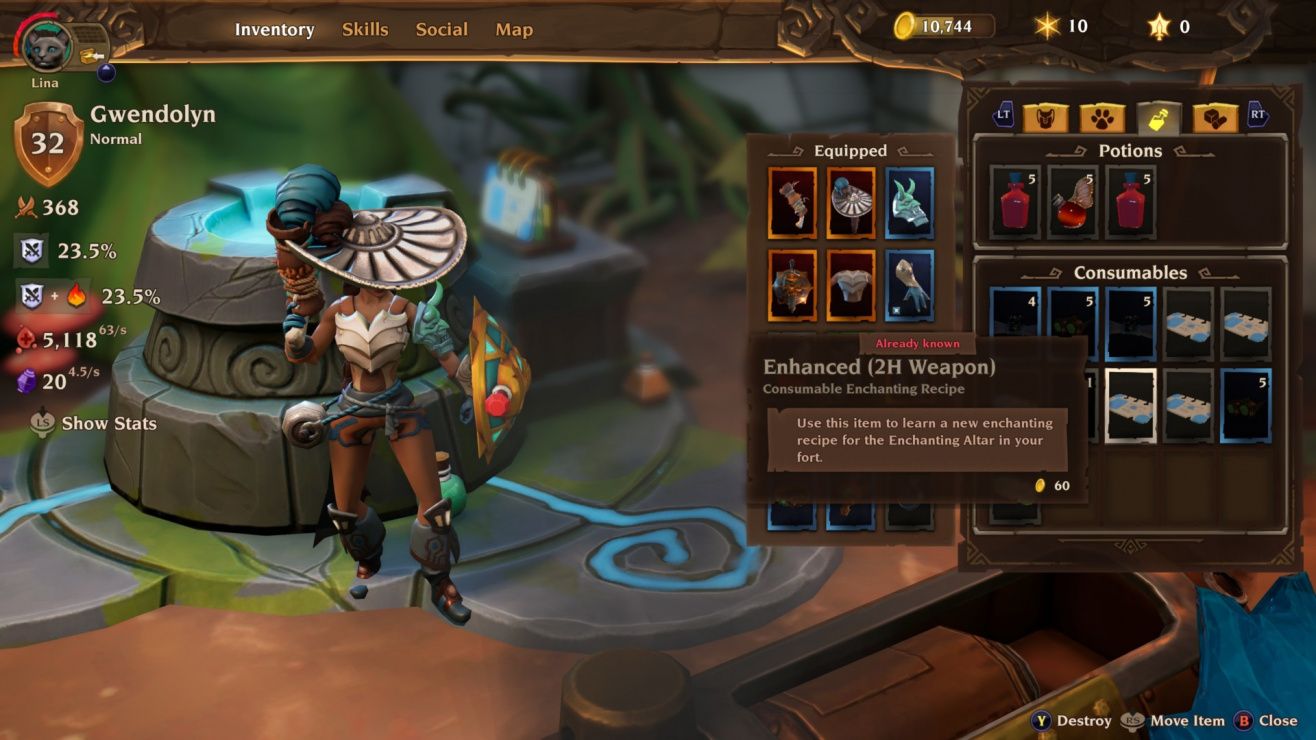 PC Steam Console Playstation action adventure Nintendo singleplayer rpg fantasy co-op magic steampunk
It’s been a century since the events of Torchlight II, and the Ember Empire is in decline. In Torchlight III, Novastraia is again under threat of invasion and it’s up to you to defend against the Netherim and its allies. Gather your wits and brave the frontier to find fame, glory, and new adventures! Brave the vast wilderness of Novastraia and all of its dangers either alone or with a group of friends! Whether it’s armor, weapons, or even new pets...there’s always more to find as you battle through dungeons and take on dangerous foes. With four unique classes to choose from and five available Relic subclasses, there are many different ways to build your hero and maximize your damage. You’ll also gather epic gear along your journey that you can customize to work with your hero’s unique make-up. It’s time to rebuild – and that includes you! Enjoy your very own fort, where you can upgrade gear and renovate your fort to show off to your friends and the world. Fight your way to fame and glory with your loyal companion! Add skills and equip them with gear to make them stronger. Each species comes in a myriad of colors and styles, so make sure to collect them all!
Share Share Share
Promote for 50G

TLDR: You might have some mindless fun, but the game has a ton of unfinished ideas and is *clearly* a scrapped MMO. My heart breaks for what it could have been. Find it on sale.
Full thoughts:
I'm not saying there isn't any fun to be had with Torchlight 3. I'm leaving this "recommended" review because there is some mindless, grindy, "ooh pretty loot colors" fun to be had. I also find the combat to be snappy and enjoyable. There was clearly a great game scattered about the cutting room floor on this one.
But every time I find myself getting lost in that Torchlight-brand "flow" (of combat, loot, optimizing, and dungeon crawling), I find some reminder that this game is an empty, scrapped MMO. Even the install directory betrays this fact (all the game files are named "Torchlight Frontiers").
Large, open areas meant to be filled with players that are totally vacant. Long stretches of walking between combat encounters will bore you. A fort-building mode with very little actual utility will make you question "why?" Quests that *always* loop you back to the central hub (likely meant to also be filled with players) are cumbersome. This feels like year one Destiny all over again.
Hard to recommend for full price, and absolutely TRAGIC it turned out this way. I wish Echtra all the best, given the game's difficult dev cycle. But this isn't the Torchlight you knew, and I'm not convinced it's worth the full $40.

So I've been playing Torchlight III since it was called Torchlight Frontiers in closed alpha. It has been a tough road for this game, but I've been rooting for it along the way because of how dearly I look back upon the first two Torchlight games. I applauded the switch from the Frontiers model to a more traditional structure. However, I was disappointed when they pushed it into an early access beta. I felt like it was too soon, and the game needed more work. The devs put in that work, though, and addressed a lot of the issues I had with it. When the game was pushed out to 1.0, I still felt like it needed a bit more time. That's where I stand now. It still needs more time.
TLDR: If you want something to dump 1,000 hours into, you will be disappointed. If you want a lighter ARPG experience that doesn't require a lot of energy to get into, TL3 is a good buy. Beware of bugs, mine have been minor but other players have reported much more serious bugs.
I am having a lot of fun playing TL3, don't get me wrong. However, as a sequel to Torchlight II, I can't help but feel like it falls short. More than likely, I am looking at my time with TL2 with a hefty dose of nostalgia, but at the time, it felt like something really special. TL3 doesn't. This game feels like another ARPG. It's a good ARPG, but it's not something remarkable. Perhaps that's more to do with the state of the genre right now. Since TL2, Diablo III got its shit together and became a good game, Path of Exile blew up to become a massive success, and smaller ARPGs like Grim Dawn have been released with fantastic support. Torchlight III has been released into a very different world than its older brother. It has far more competition.
The core of Torchlight III is solid. Playing the game moment-to-moment deleting mobs of enemies is as fun and satisfying as one would expect from an ARPG. The system for character builds isn't the deepest, but it gets the job done. It doesn't have the wild openness of Path of Exile's skill tree and gem system, but that's not exclusively a negative. It's a lot easier to work out a build in TL3, and I feel like it's very hard to make a "bad" choice. Halfway through my first character, I thought I had chosen a bad relic for it. However, a little change in build and re-allocating skill points, and I was rocking it and having a ton of fun.
The stuff around that core isn't as solid. The game has a story. What that story is, I can't tell you because I forget about it as soon as one of the very rare minimally-animated comic-like cutscenes is done. There are "audio log" style lore bits scattered around the world, but nothing in the game has done anything to get me to care about paying attention to them. The areas within each act are very repetitive, too. Each act has a couple of tile sets and the game does almost nothing to make places feel distinct. At one point in the game, you are told to go to the "Chop Shop." Just hearing the name in the context of the world, you might think it is some graveyard of automatons with piles of broken robots and stuff. You go there and there is literally nothing to differentiate it from the previous place you came from. It looks exactly the same. It feels exactly the same.
Other ARPGs have done a lot to create interesting and unique areas, but every location in TL3 feels utterly generic, and that's sort of TL3 in a nutshell. It's a bit generic. A couple of the classes are cool unique ideas like the rail master and the automaton, but beyond that, it doesn't do much to inspire imagination. The skill system is the same. Everything in TL3 is done just well enough to get by. At least, it's done well enough for some people. Thankfully, any bugs I have encountered have been very minor, but some people are having much more serious problems, so anyone should be well aware of the potential for problems right now.
Since the beginning, my experience with Torchlight III through the alphas and beta has been one of hopeful optimism. When talking about it with friends, I'd always try to get across the idea that TL3 had the potential to be something really awesome, and that all it needed was some more time to get filled out and polished up. I still feel that was, but it is now a "full" released product. It's hard for me to be as lenient on it as I was in the past. It is not the special "buy it immediately" game that Torchlight II was. It is also not the absolute clusterfuck that Wolcen was. It's a good game, but not a great one.
So do I give this a thumbs up or thumbs down? Despite the possibly perceived negativity of all this, I still give it a recommendation. However, it comes with some caveats. Of you are a hardcore ARPG fan expecting to put 1,000 hours into the game, you are likely to be disappointed. If you are good with a lighter experience, then you will have fun. It's a good game to play while listening to podcasts or audiobooks or with a video on a second screen. It is also a good game to play with friends while you chat. You aren't going to find the depth of something like Path of Exile, but that also means you aren't expected to put in a lot of work into playing the game. I sincerely hope the devs can expand on TL3 and make it into the great game I think it can be.

So, I played this game when it was in alpha and was meant to be free 2 play. The game was much worse and a lot more weak and shallow character progression. It's been a while since then and I had just bought this game to get back in. Looking at the reviews and the "mixed" had me worried.
The game has improved leaps and bounds and I'm actually pretty surprised the progress they've made. As for as the game itself, I'm not quite sure where people get this "mobile" feel from, I actually have zero clue (maybe because the contracts? not really sure of the correlation.)
I've really enjoyed my time. The character progression is vastly improved, I'm pretty bored of the classless arpgs, honestly its overdone at his point. I very much so enjoy individual classes, there is quite a bit to theorycraft with, the class trees and the weapon trees, the trees themselves are quite small but it partly makes up for it by upgrading the skill and getting bonus effects outside of baseline damage increases. I will say the stats on gear can be pretty boring, legendaries have nice effects but, the stats themselves are quite basic.
The comparison to old torchlight games being better, I mean I can see why people would say that, but in reality, this game isn't far off, and they are still working on the game, and will have conitnued updates after launch as far as I know.

First impression is good. Due to server issues wouldnt be able to play a lot (first day issues). But would be better with a deeper skill tree. There are 4 classes. Of course its still in EA and i am sure it will be no less than TL2. If you are a Torchlight fan, its a must buy. Even if you are not, worth a try for sure.