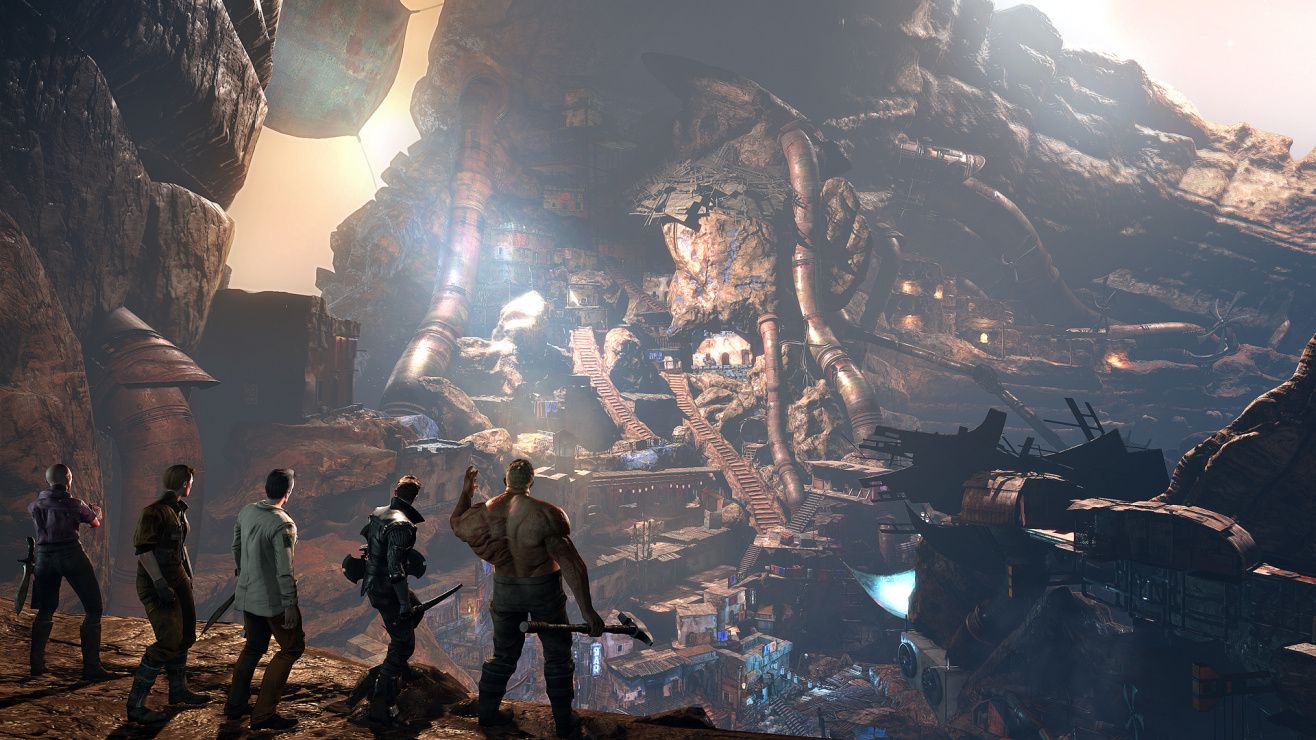 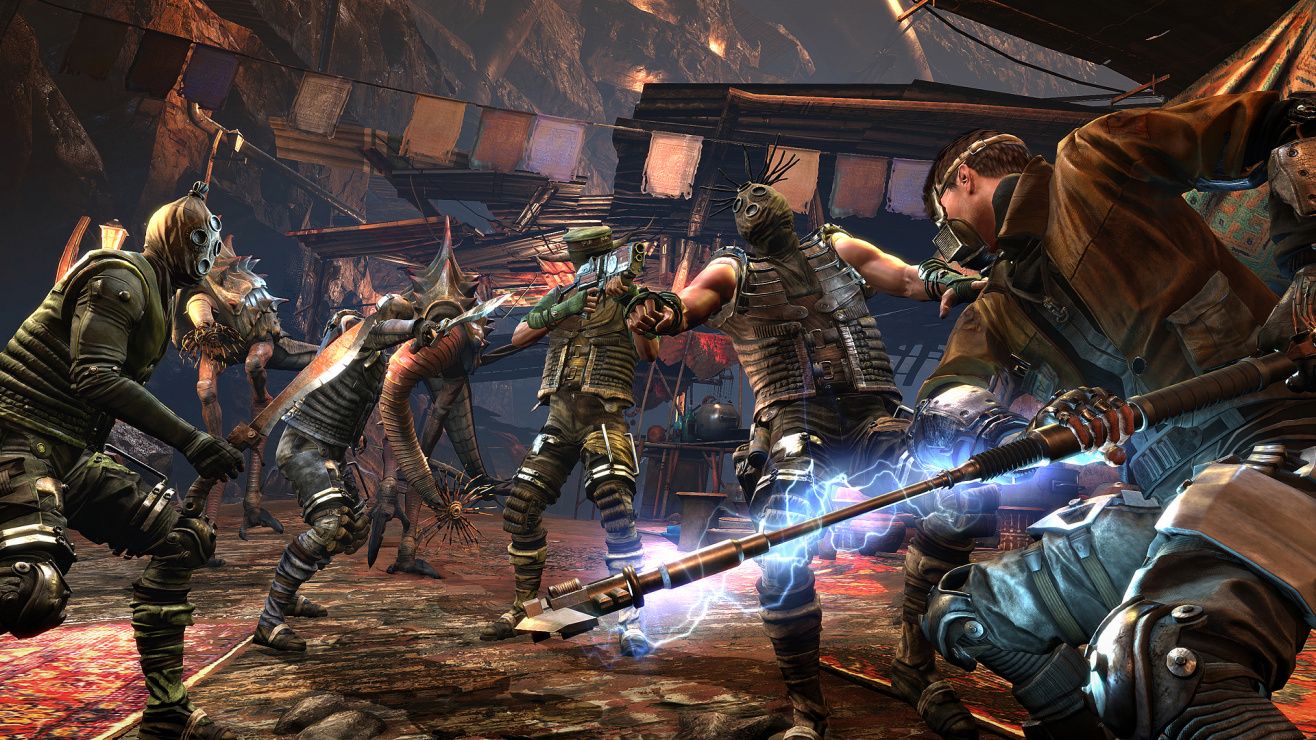 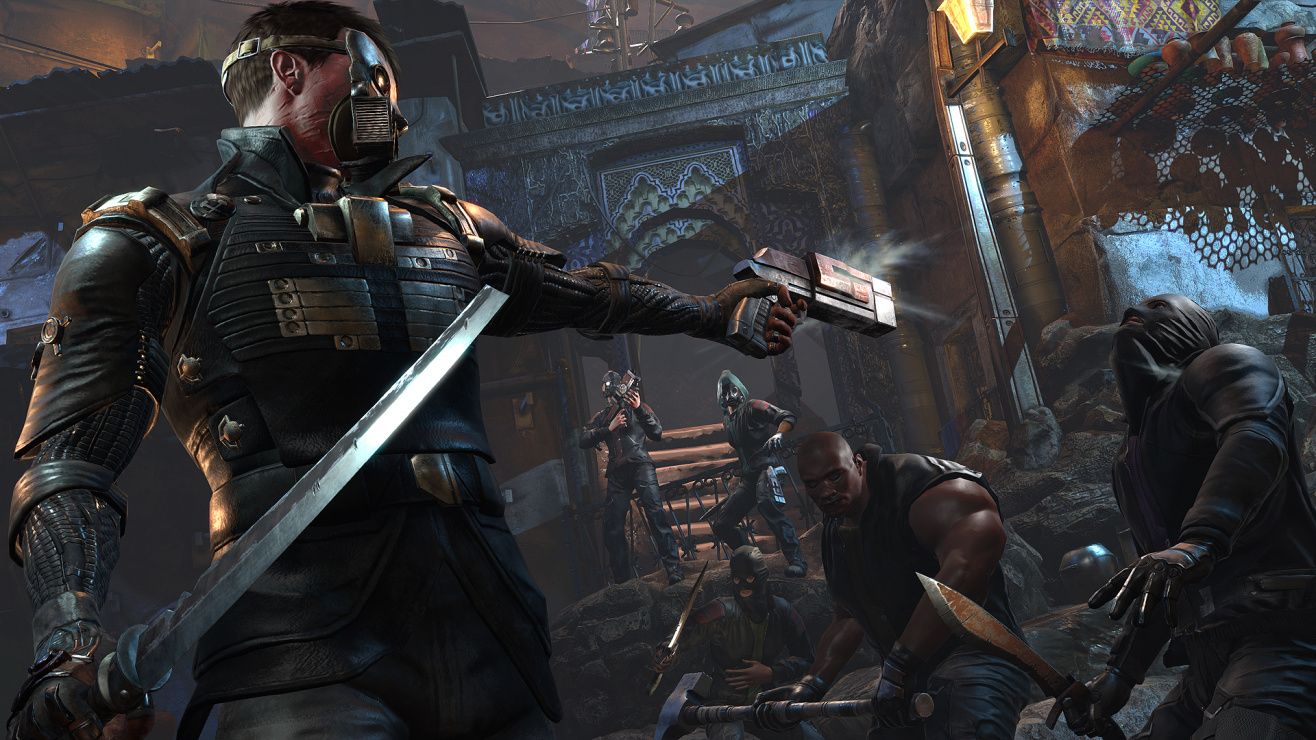 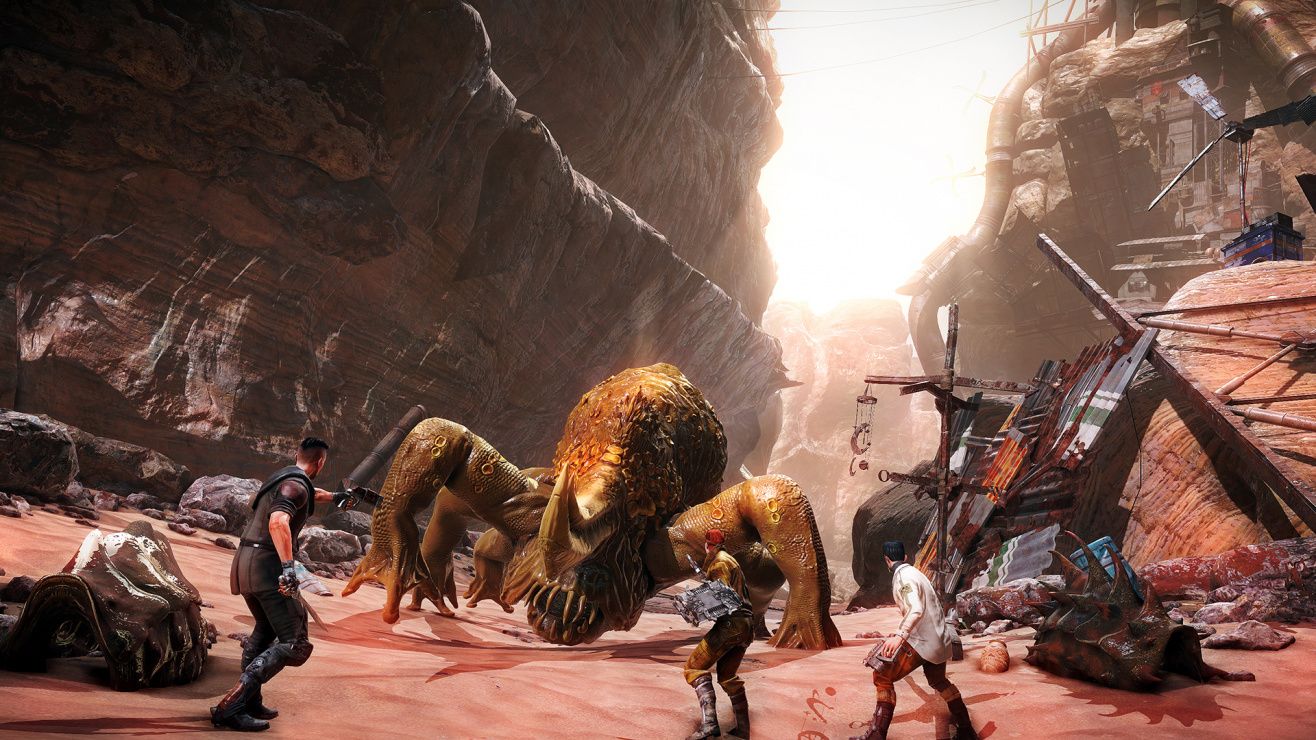 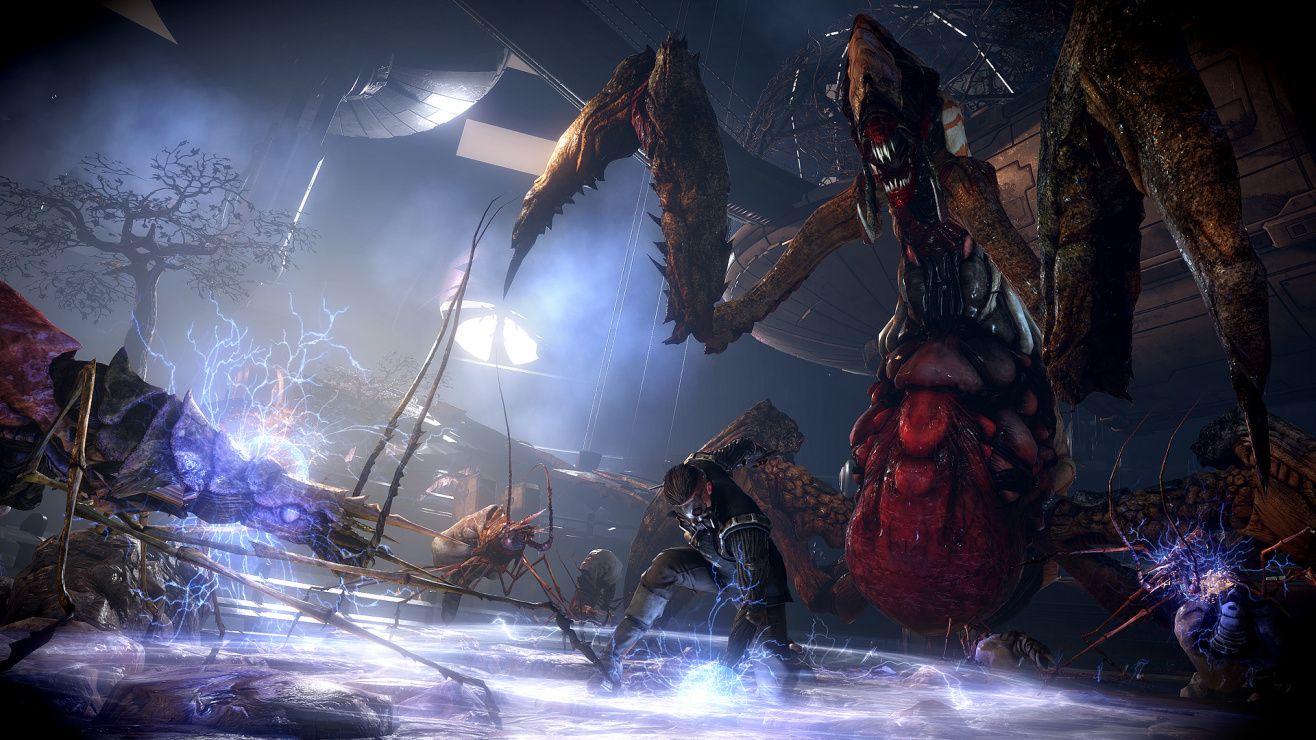 PC Steam Console Playstation action Xbox adventure rpg sci-fi atmospheric open world cyberpunk mars
The Technomancer takes you to Mars, where you live as a mage-warrior. You’re capable of harnessing destructive electrical powers amplified by cybernetic implants. Feared and respected by all, you are on the verge of completing your initiation rite to become a fully-fledged Technomancer. This action-RPG offers four different combat skill trees focusing on three distinct fighting styles, as well as the potent electrical powers. Of course, brute strength is not suited to every situation. Dynamic conversations play a major part in questing, and your decisions will dramatically alter the story and world. You can also craft equipment, weapons and armor for yourself and any companions you recruit along the way. Undertake an adventure through forgotten paradises, lost cities under ice, and dystopian shanty towns that sprawl across Mars' dusty embrace. Will you survive long enough to uncover the truth behind The Technomancer?
Share Share Share
Promote for 50G

This is a middling game for sure.
Warning heavy backtracking and lack of different enemies.
average combat, not enough cool weapons or gear just average.
If you time constrained and just looking for the very best games skip it. I've played worse and better games. I think bound by flame was better in battles and enemy variety. I remember it being much harder. Since this game is old an you should be buying it on sale i could recommend slightly. ho-um is my feelings toward the game.

This game has gotten a lot of bad reviews over the years and has not been that popular. I do not understand this, as I have enjoyed it and am on my second play through. Is it a perfect game? No Does it have the most awesome graphics? No However, it does have a good story and I don't think that combat is as bad as some seem to think it is. I have played other games that have much better graphics, but do have combat systems that are hard to use and some of them have gotten good reviews for some reason. The only real issue I have with this game is that there is no type of skill reset function within the game. If you are playing for the first time, I would spend like one hour playing each of the different three types of classes (mace/shield, staff, dagger/pistol) and see which one you like best. All of them will have the technomancer aspect to them. Once you think you have figured out which one you like, then I would start your actual play through, putting skill points in your chosen class and technomancer. I would recommend this game, especially if you get it on sale, it is well worth the attention.

This game (and developers) deserve more love. I think the thing that hurts this game the most is how beautiful the visuals actually are, because when you see a game that looks this good you forget that this isn't a AAA game. This game does not have a AAA game budget and it shows, but you can tell that it was made with love.
The visuals are nice, and the voice acting quality is good in places and awkward in others. But even when the voice acting is good, it can still look awkward because lip-syncing is basically non existent and sometimes the body and face animations (or lack there of) don't really match the tone delivered by the actors' performances.
The combat is very fun. It feels fluid and offers different play style options. You have 3 stances to switch between at any time, each one using a different weapon set: A staff that allows you to hit multiple enemies with a swing if they are grouped; A dagger and pistol, that allow you to either attack from range, or get up close and personal with quick strikes that have a chance of dealing poison damage; A mace and shield that deal slower but stronger hits with a high chance of disrupting the enemies' attacks, and block or parry strikes instead of needing to dodge incoming strikes like with the other stances. You also have of electric based powers to use in parallel with your weapons (magic). Each of the 3 stances and the technomancer powers have their own ability tree, with up to 24 ability points to invest in each one, and you can really feel the difference as you progress in a tree, but you feel more compelled to invest in 1 stance and the electric powers instead of investing in different stances.
The enemies respawn fairly quickly so grinding isn't too hard, and i found the fights enjoyable all the way till the end of my playthrough. And grinding isn't necessary (unless you're going for the achievements) but it doesn't get harder as you progress because it takes the same experience to level up no matter how much you progress.
The starter companions you get in the game aren't really that useful except for splitting up the enemy groups which can be useful when you're still low leveled, but later on in the game you get other companions that are much more interesting and useful, and at some point i wished i could bring more than 2 with me at a time. The romance options in the game feel a bit tacked on just for the sake of saying that the option exists.
The environment is vast with a lot to loot, but walking around it can get tiresome after a bit. There are also areas where you'd think you should be able to go from looking at it, until you hit an invisible wall, but if you look at the map it's clear what's reachable and what's not. The soundtrack is nothing exceptional but is fitting enough with the theme to be immersive.
The story is enjoyable and you have a lot of choices to make along the way and a satisfying ending.
If you're a fan of story focused epic action rpgs i recommend this game. It's not perfect but there's a lot to love and It's a huge improvement from its predecessor (Mars: War Logs) that makes me look forward to see what they've done with their new epic action rpg Greedfall.

Underrated doesn't even do it justice.
This game is absolutely criminally overlooked.
Mad respect to developers ; The sheer size of balls on these guys that sat down one day and went like - "well we have around 15 devs in our team, about half of Bioware's janitor's salary for budget... let's go ahead and make Mass Effect but better !"
For RPG lovers this game has everything and more ;
- The combat is unique mix of RPG and Beat 'em Up, that's miles better than anything in Bioware games. (Being able to switch between three combat stances on the fly is my favorite thing)
- The characters are well written, interesting and unique. And even voiced pretty damn great for the most part.
- The choices actually matter.
- The companions are fun and interesting and have relevance to main plot.
- Character progression is quite deep and allows for number of varied character builds.
- The world is very unique and interesting. The sheer amount of lore can be quite overwhelming at first. (For better understanding of the world and conflict between water corporations I recommend playing Mars : War Logs)
- Character customizations is amazing for AA game with tons of different armor pieces, weapons and upgrades.
- The game length and amount of quests / side quests is astounding for such a small team project.
- The OST for the most part is amazing with only couple of duds.
All in all - I highly recommend this game to anyone with taste for ambitious AA projects, Sci-fi enthusiasts and RPG lovers !
If Mars : War Logs was Pitch Black,
The Technomancer is Chronickles Of Riddick.

I picked this up after playing Greedfall which I absolutely loved. It took me a little longer to get into Technomancer but after about 5 hours much like Greedfall it was like a novel I couldn't put down. In my opinion Spiders are a totally underrated development team. You can just feel all of the love they put into their characters and story. I totally fell for all of the companions loved the themes and I cannot wait for Spiders next game.