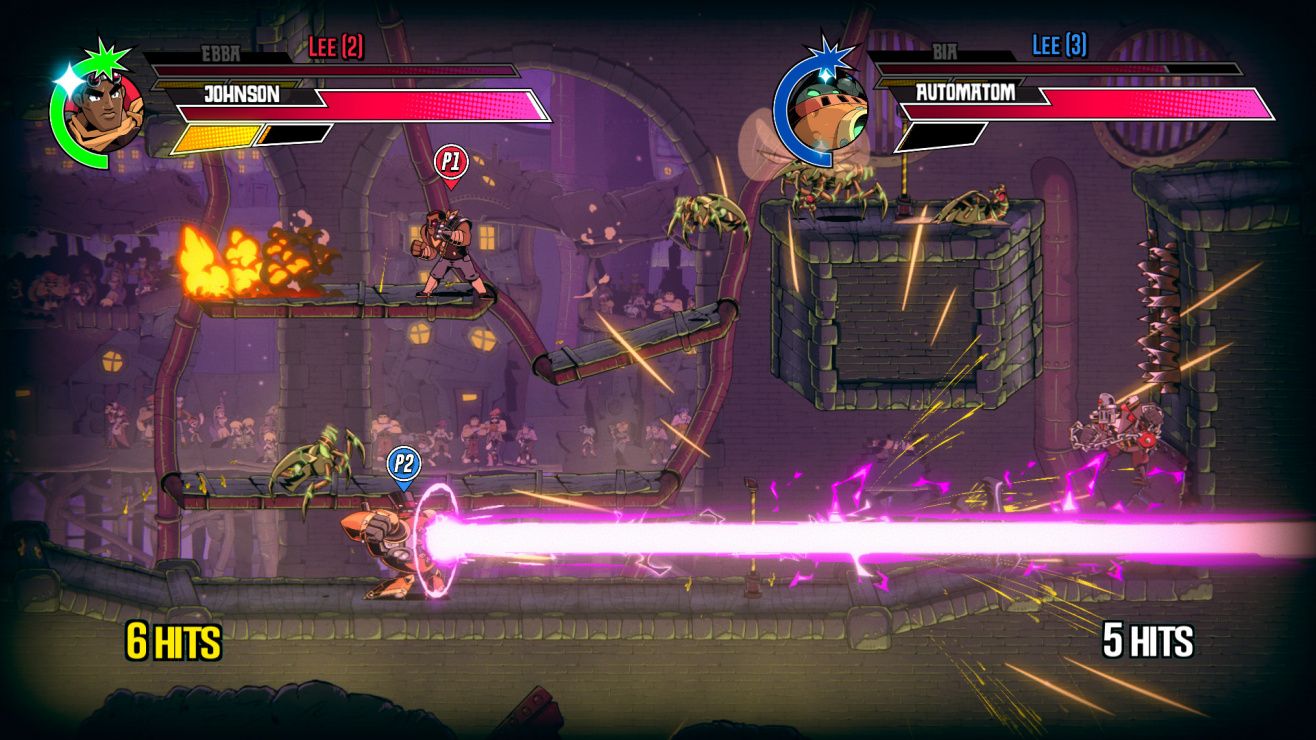 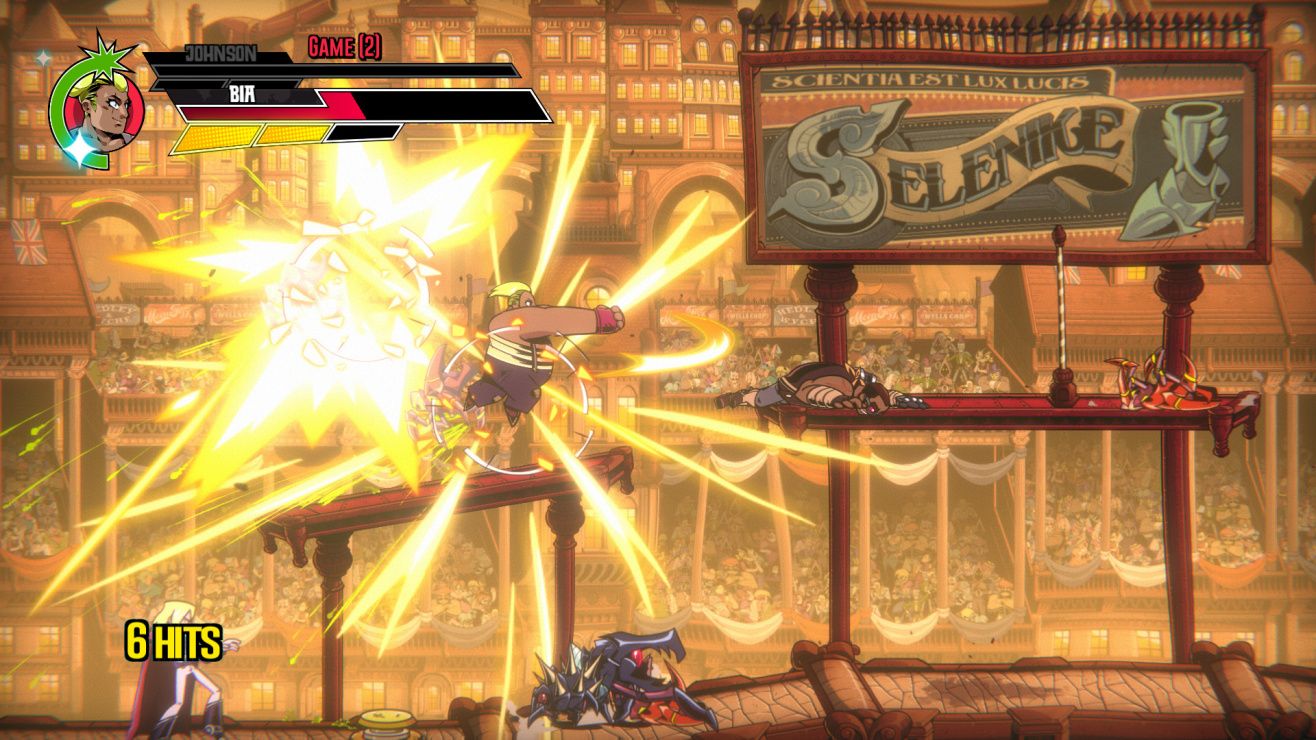 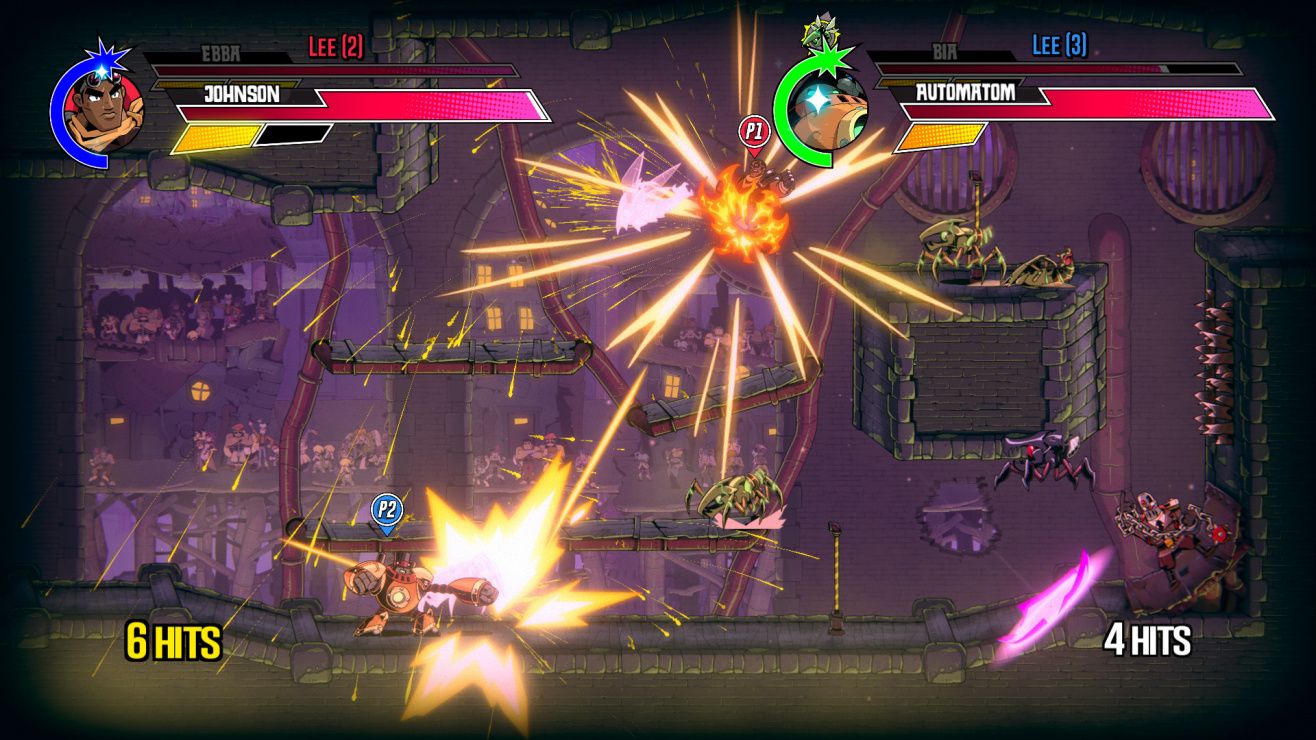 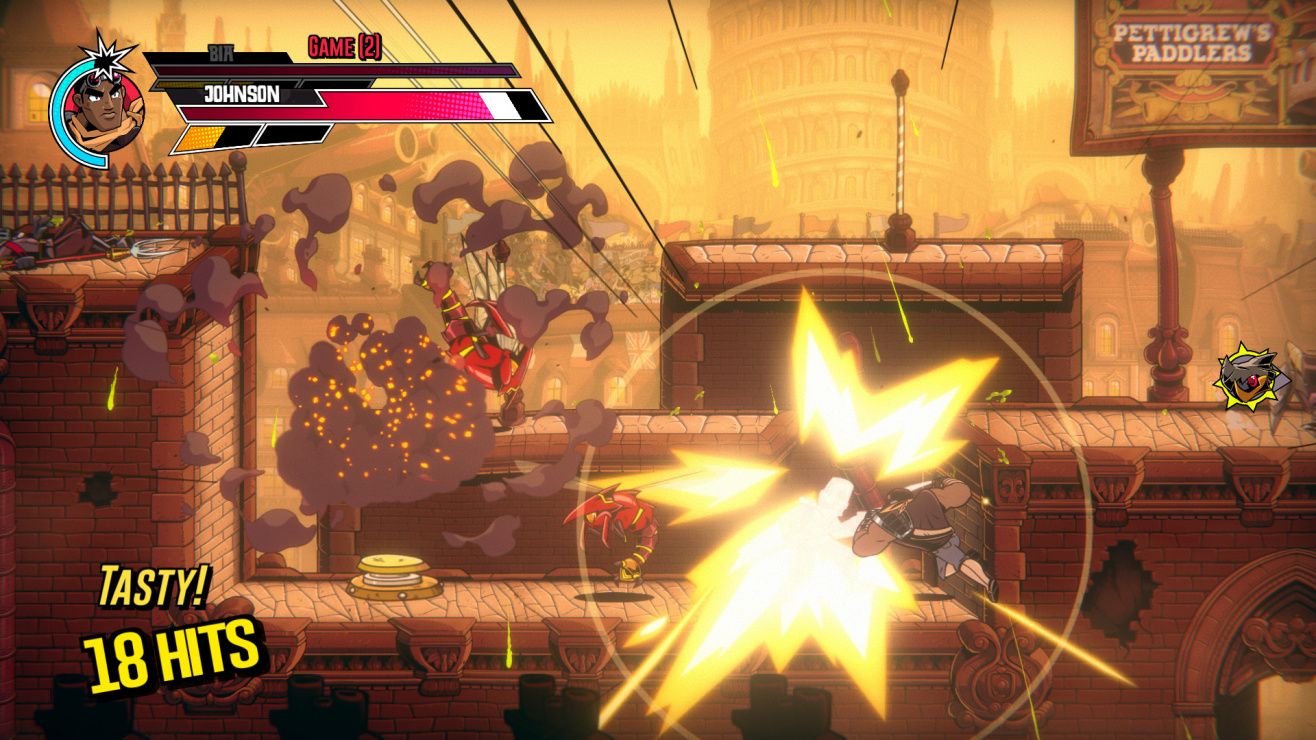 PC Steam Console Playstation action Xbox indie Nintendo multiplayer co-op 2d comedy fighting speed
Speed Brawl is a 2D combat-racer about moving fast and hitting hard! Maintain your momentum, build your combos, and unleash powerful special moves. Find your own fighting style, and assemble the finest team of brawlers ever seen. Then do it all again faster... faster... FASTER!!! Features -6 Unique Brawlers with their own play styles -Loads of upgrades to customize each fighter and blast through the competition -Razor sharp visuals and beautifully animated characters -Over 50 unique action-packed events and races to wade through across multiple Speed Brawl Leagues. -Local and online co-operative play through the whole campaign! Take control of your team of fighters in an elite sport where only the bravest, the fastest, and the most worthy warriors face an onslaught Selenite hordes. Welcome… to Speed Brawl!
Share Share Share
Promote for 50G

One of the best beat`em ups!
Amazing coop!

Rewarding mechanics, grooving soundtrack for the fast paced gameplay, chicks are pretty cute too. If you like the dash mechanic from Mega Man X, this is your game.

An entertaining blend of beat-em-up and speedrunning game, Speed Brawl is about going fast, hitting fast, and having fun doing it. I typically don't enjoy games that time you and rank you thereof, but SB is an exception. I first played the game at PAX East about two years ago, and it immediately grabbed my attention with it's extremely slick controls.
The time and place: An alternate late-19th-Century England where they have just barely won a war with giant, invading Lunar insects called Selenites. In a battle-scarred London still in the process of rebuilding, the favored sport of the masses is the titular Speed Brawl: A show of force and celerity where competitors must negotiate a course of hazards, captive Selenites and their handlers in the fastest time possible. Our two main protagonists, the scrappy, runaway-scion-of-a-wealthy-family Ebba and burly-but-thoughtful prizefighter Bia, have their sights set on reaching the top of the sport's four main leagues. Along the way they'll joined by the sassy street urchin Cassie Pain, stern rail worker Johnson Kite, the frilly, rose-tossing, Tuxedo-Mask-wannabe Karl von Ambrose, and top-hatted steambot AtomaTom. Standing in their way are the afforementioned bugs and thugs, as well as the sport's conniving organizers: The whiny, diminutive Willy, the imposing Stepan Kalashnikov and his tempestuous partner Faina, the hard-assed Commodore Jack Townsend and the mysterious Hugo Wells, the Duke of the Moon- the man who saved England and won the Lunar War.
Speed Brawl grab's the players attention right away with an eye-catching, colorful, comic-book artstyle and entertaining dialogue before and after each level. And it gets better once you're in-game. As I mentioned above, Speed Brawl handles incredibly smoothly- moving through the environment and attacking enemies is simple, chaining combos is intuitive, and using specials and super attacks is flashy, fun, and effective. The game rarely if ever fights you in the way that a 2D Side-Scroller ought not to do, but does anyway in the case of games like Castlevania or Mercenary Kings. Speed Brawl is possibly the least janky 2D game I have ever played and other developers could learn from its example.
The game's core campaign is split up into bitesized levels that take mere minutes to complete, whereupon you are judged on the speed at which you completed the level. Any completed challenge contributes to your account level, with level-ups conferring a skill point for each of your characters. You also receive equipment and money with which to buy more gear from shops- each can equip gloves, boots and special items, affecting attack, defense and other attributes like health or stamina respectively. Aside from the equip, shop and skill menus, there is also a codex page where you can read about the characters, items and enemies.
SB can be played solo or in two player coop, and has a tag-in system: Each player can choose two characters and can switch between them on the fly, with the tagged-in character performing an attack as they arrive, so you can weave tagging into your combos for advanced play. If a character runs out of health, whether it's one of yours or the other player's, you can revive them within a short window of time. There is also a versus mode, but naturally I have not partaken of such. It might be fun, but for me typically versus modes are much less so then cooperative ones.
Speed Brawl has a certain spark of fun and aesthetic quality that puts it above many other games with similar elements of gameplay and design. If have any love for platformers or beat em ups, or speedrunning for that matter, Speed Brawl is absolutely worth your time and money.

This game is an incredible rush of adrenaline! It really gets your heart pumping and your mind racing when you've gathered the right momentum. Speed Brawl is what happens when you mix Sonic style speed and turn it into a combo heavy beat 'em up. It's a momentum based beat 'em up, if you will.
The art style and a bit of the pre and post level dialogue reminds me of classic Saturday morning cartoons from when I was a kid, except with polished designs and a refreshing modern colour palette. The music has a groovy rock feel with tiny bits of techno added in there, and most of all the gameplay is TOP NOTCH.
Each Brawler comes with a normal attack that can be modified into launchers or sliding attacks (meant to close the distance as well as give you a smooth way to slow down upon approaching an enemy), a special that requires a stamina bar to use, your typical double jumps, and of course your SUPER special that spans the entire screen. Alongside that you can tag your partner in to either fight for you or perform their special move and get out of the fray once they've dealt their extra damage.
There are six aesthetically and stylistically diverse characters to choose from, and for each level you get to choose two to play as. Half the team consists of Speedsters, while the other half consists of Tanks, and choosing the right combination of characters will drastically affect your playstyle for the level.
What I love about this game is that it is deceptively complex. At first glance it looks like you'll just be mashing buttons mindlessly, but doing so actually gets you thrown around like a rag doll and have your momentum interrupted. Speed Brawl is all about maintaining break neck speed as you zip through the screen attacking enemies in all areas in the most efficient way possible.
I honestly wish there was more footage of this game on YouTube where players string long combos and maintain the speed the game was meant to be played in, because as of now, all the footage I can find on YouTube just doesn't express how stylish and thrilling this game can be. With all due respect, all I see is players treating it like a regular old brawler taking their sweet time beating up enemies when they can be swinging off poles and kicking off walls to wipe enemies out at breakneck speed. It makes me wish the people with high scores on the leaderboards would record and upload their gameplay as I would love to see the game played at its full potential.
Lowkey shade aside, though, this IS an incredible game even at full price. The campaign is kind of short as most levels can be finished within 1-3 minutes if played right, or maybe 5-10 if you want to take your time by either treating it like an old fashioned beat em up without any regard to its momentum based mechanics--or if you're like me and want to play it at a slower pace sometimes just to see what options you have available as you study enemy behaviour.
One thing I'd like to see more of in YouTube footage is the use of dashes and dodges as they seem to be the bread and butter of this game. Although everything moves so fast, the enemies are actually kind of slow in setting up their moves, and there's even a shining indicator that tells you when they are about to strike so you can time a dash at the right time. Do a perfect dash and you can do a follow up counter attack that does extra damage, otherwise you just roll past the attack and can attack in turn normally. Then on top of that is using the dash to maneuver around the screen, which can be done from any position and any direction. BUT the best way to use the dash, I find, is by kicking off walls and swinging off poles as it increases your speed thus increasing your damage.
Anyways I can go on forever about how much fun this game is, I will just end with the score of 9/10. The story could've been better and fully voiced, and the equipment management aspect just seems like tedious busy work with very little effect at first (but does become important later as the game goes on), but these are minor nitpicks for an otherwise SOLID and UNIQUE momentum based brawler.

For a game a got on a bundle and decided to play on a whim, it was a lot of fun! Controls feel responsive, gameplay has a lot of combos and rewards reactions and fast-gameplay in general. Story is ok, nothing to special, but the characters are fun enough.
The only thing that I felt was really annoying was the fact that you don't have any invincibility frames after using special attacks, so a lot of times you take damage that there wasn't any way to avoid or react to, but besides that it's a pretty cool game overall.