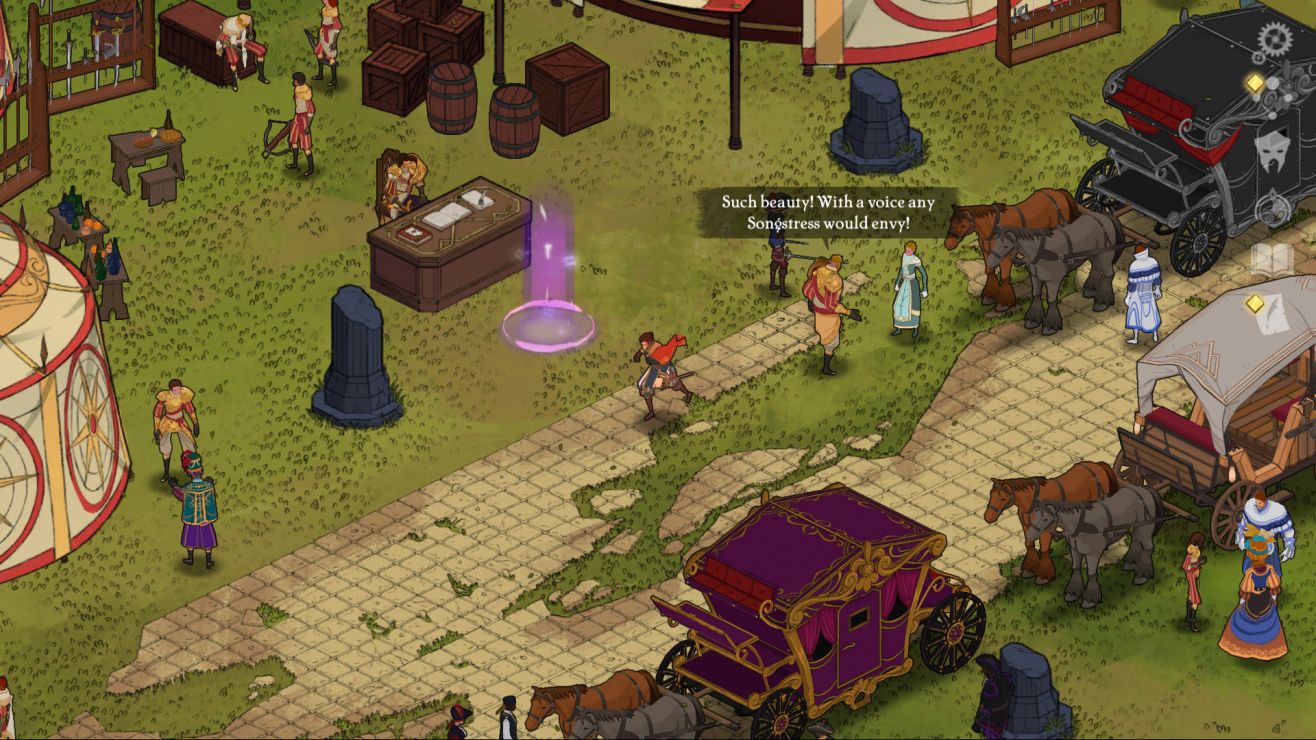 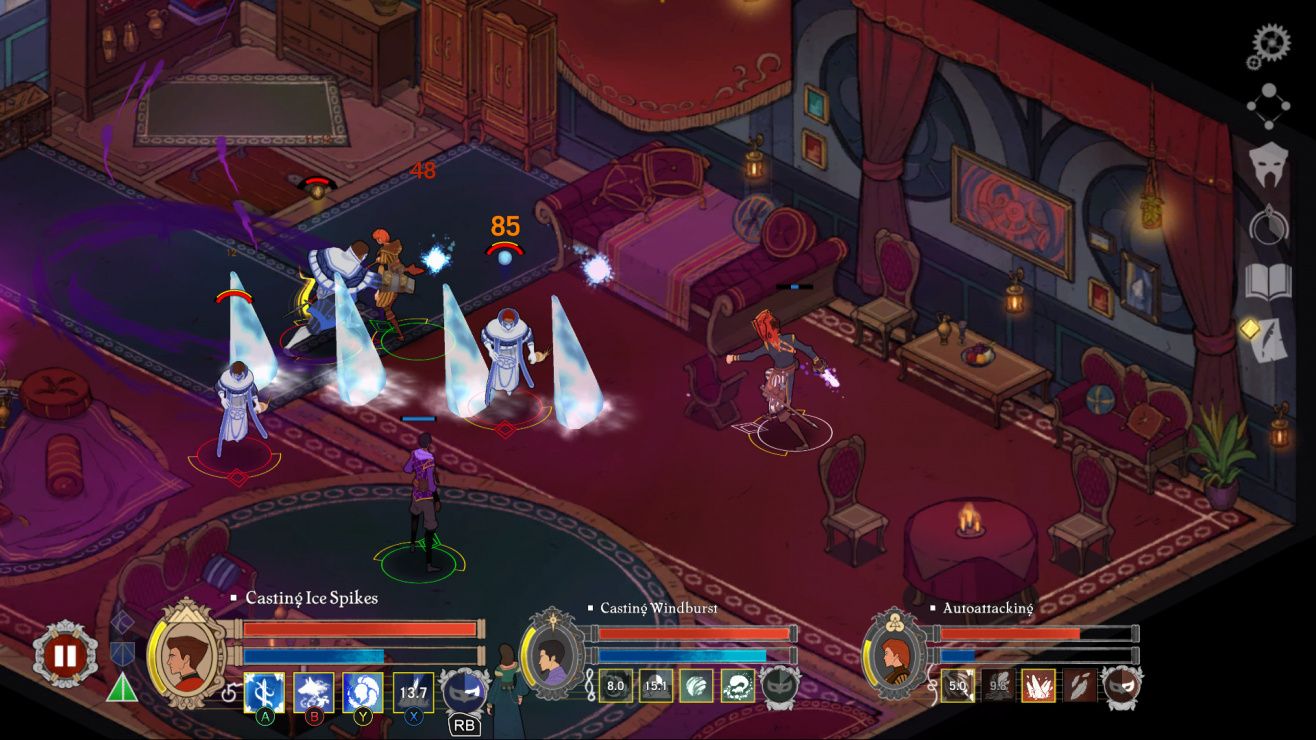 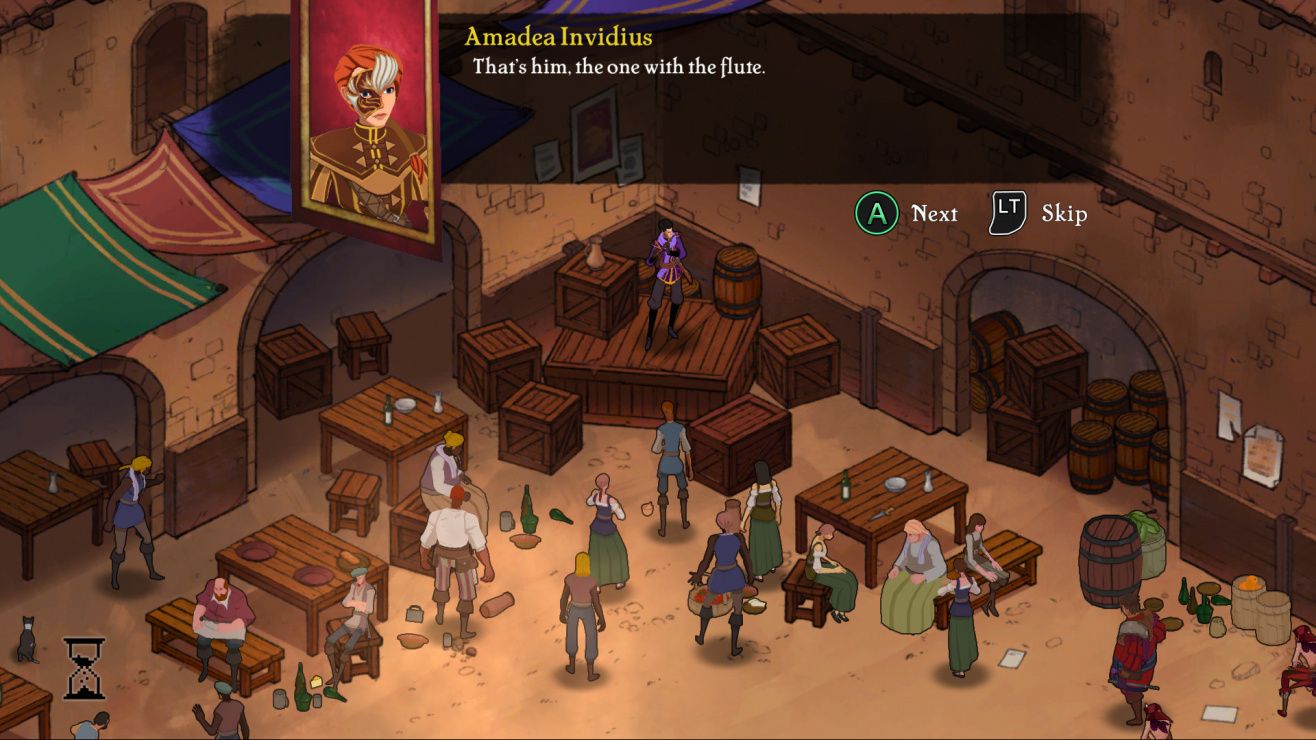 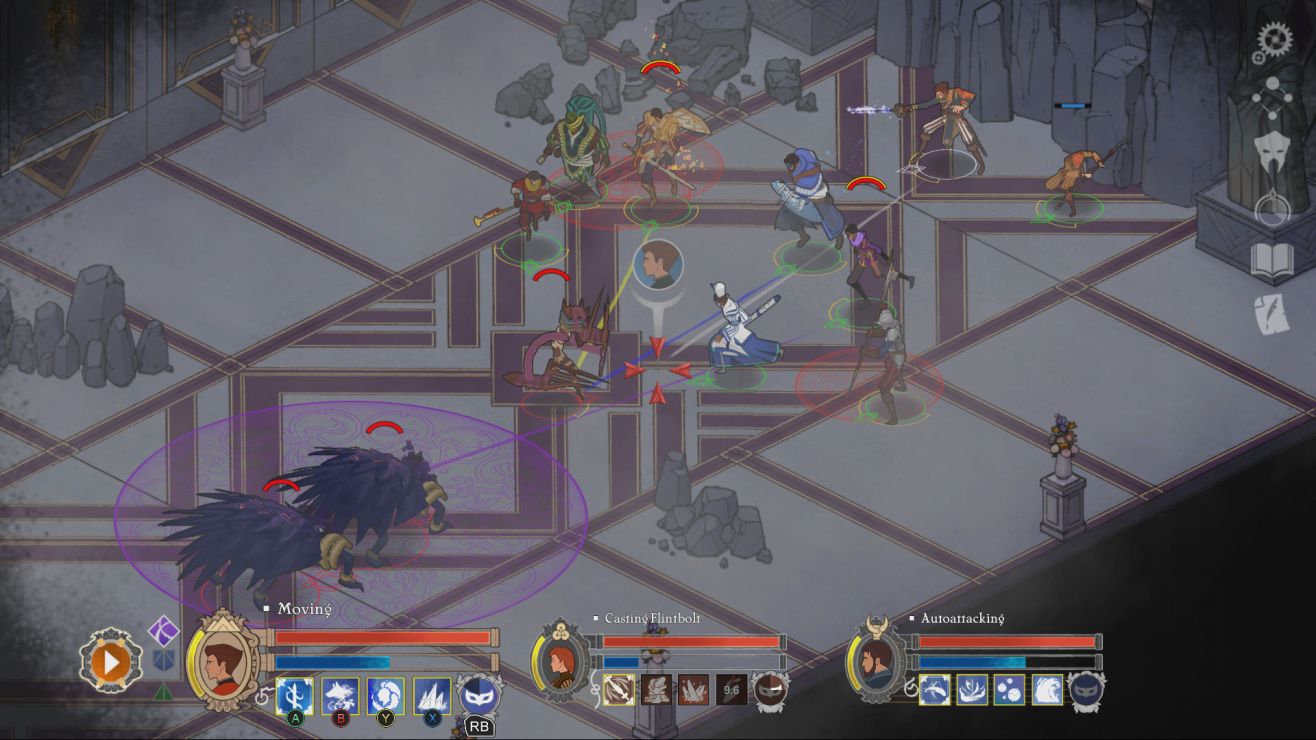 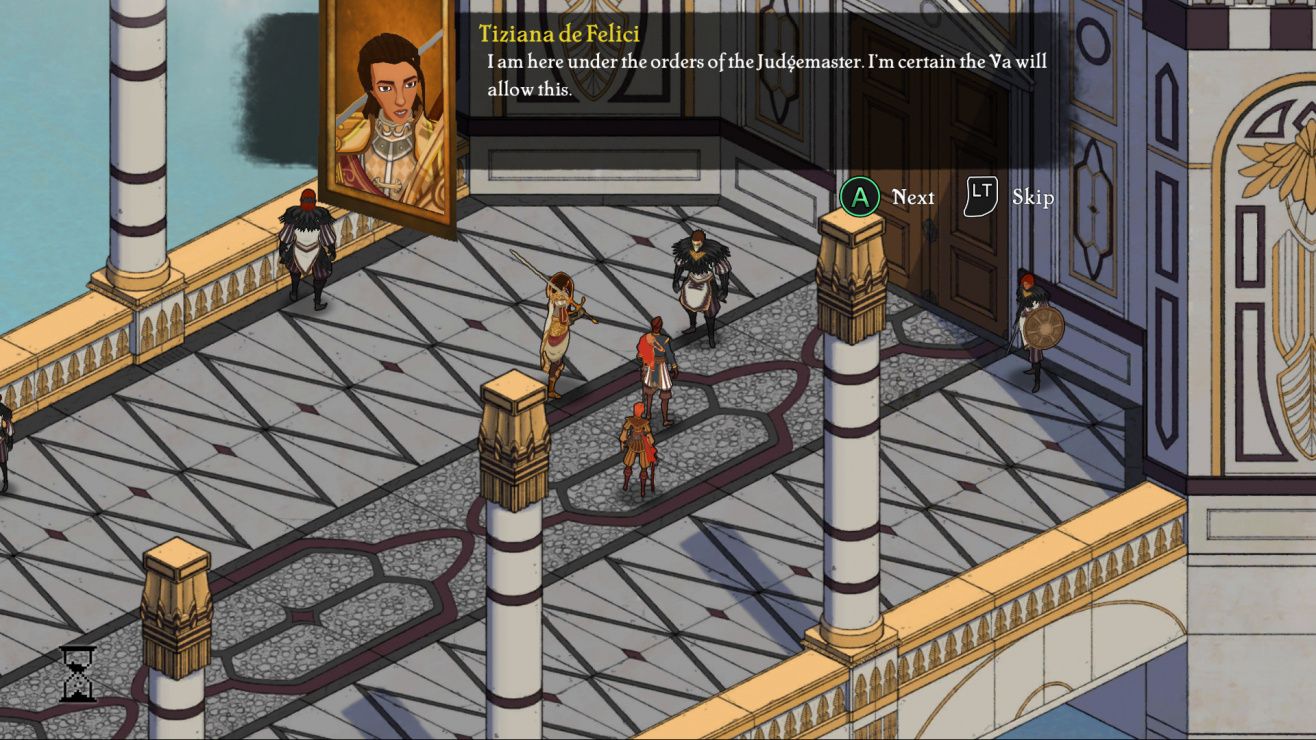 PC Steam Console Playstation Xbox indie Nintendo rpg fantasy role-playing tactical medieval isometric drama
Navigate the masked deceptions and deadly magic of a vividly Venetian city in this fully voiced pause-for-tactics RPG. In the turmoil-ridden Citte della Ombre, religion holds no sway. Only the songs sung of one’s deeds will carry an Ombrian’s legacy beyond death. Those who hold even the smallest morsel of power will make every effort to ensure their songs live on. Enter the Mascherines - masks that grant their wielders the power to channel the elements and cast destructive magic. The Mascherines have perpetuated a culture of inequality between the power-hungry guildsmen known as the Masquerada and the impoverished lower classes, the Contadani. A prolonged civil war, ignited by Contadani rebels who steal Mascherines from the Masquerada, has only drawn scars of mistrust across the Citte since.
Share Share Share
Promote for 50G

It's basicaly a visual novel with combat inspired by oldschool RPG's like Baldur's Gate. Tells a really compelling, interesting story and keeps the player interested from start to finish. Most of the time you'll spend just listening to the dialogue, but honestly? I don't mind it, considering that every character is fully, and expertly voiced, especialy the main character who's voiced by none other than Matt Mercer. The only problem I have is that this game is painfuly linear, and there are basicaly no choices to be made, and you just progress through it and that's it, there isn't really much of interaction between the player and the world. Though truth be told, while it hurts the gameplay, it improves the storytelling, as there are no distractions, there is nothing - only the main story. And truth be told, it was well worth sinking these 12 hours. As a side note, it is super easy to get 100% achievements as long as you keep an eye out for collectibles - which aren't even actualy hidden, the only thing is to remember to take a stroll around the map before progressing. And sure, you may miss a few, but you can eaisly return to the previous chapters to pick up whatever you missed. Final verdict, 8/10, gameplay is okay, the story is amazing.

Very good plot, with slightly fresh setting, nice characters, with some work done to make them complex (at least there not always a lot of time for that), very good visual style and excellent voice-work for a indie game.
Absolutely linear, yes, but memorable, finishing game leaves hunger to read some books about this world, fights are lightly tactical, fast and fun, visuals are very colorful and vibrant.
I want more like this.

This game surprised me. I got this game in a Fanatical pick & mix bundle quite a while ago. I simply added it cause I had 6 games I wanted and the next bundle level was at 7 picks. It look interesting enough, but it wasn't on my radar. I read some quick reviews back then and the major consensus seemed to be that it's good for story, characters and world building, but that the combat was tedious and boring. Many reviews stated that the best way to play it was on "story mode".
I fully agree thatthe story, characters and worldbuilding is great. I quite adore some of the characters, the lore is fun and it's put well together. Like with other story based games that have you immersed, I had my "oh no" moments. Love those moments.
At moments it does feel like a lot of inspiration comes from Bioware RPGs, but that's ok. They're good RPGs and this game takes it strong enough that it does come around in its own.
The art and sounds are lovely as well. The voice overs are great, but that's not surprising when you see names of the voice actors. Dialogues are presented through both text and voice over. I really love the animated portrets during these dialogues, you see the resemblance of their movements to the movements of the character . It fits and gives it an extra touch.
I disagree with the reviews saying the combat is tedious or boring. I quite liked the combat. You fight with weapons, but through the mascherines you also have magical powers. It's nice that you can have this combination. I quite liked the pausing, planning and using of these powers. I did read about imbalances and difficulty spikes, but I didn't come across them. I played on "normal" and I found the combat a tad on the easy side.
All in all I must say that this game was totally worth it. As said, I got it very cheaply in a bundle, and I can honestly say I got much more value out of it. If you like story, character depth and world building, together with battles that you can tactically pause, this certainly is a game you want to play. I fully recommend this game.

Masquerada: Songs and Shadows has been a pleasant suprise for me. The story telling is incredible, with charming characters, a rich lore and a great story that never gets boring.
I've enjoyed the combat as well. It's not as deep as it could have been, but there are plenty of different special attacks and the game is rather easy, even on "hard" difficulty.
All by all a very good game, that I recommend to anyone interested in playing a story-driven RPG.

This game is surprisingly nice.
Pros:
- story
- art style
- sound
Cons:
- short
- linear
- clumsy combat (but you can get used to it - so this is more of an personal opinion)

ok, on the plus side, this is a beautiful product. The lore is rich, the voice work is excellent, and the soundtrack is fully enjoyable.
On the downside, I find it misleading that this is titled as an RPG, because there is literally NO roleplaying in what is supposedly a roleplaying game. This is a visual novel that happens between bursts of required combat. You decide whether to bother with exploration and sidequests, but you have zero options in dialogue. You cannot develop the main protagonist. The only options you ever pick are what element you want, and which mask you equip. The main quest will proceed to the predetermined end no matter what.
I am recommending this title because in retrospect I enjoyed the story and the world, but it was a close call due to the lack of any real replay value. I hope that the developers re-visit this world again with a much more open storyline.