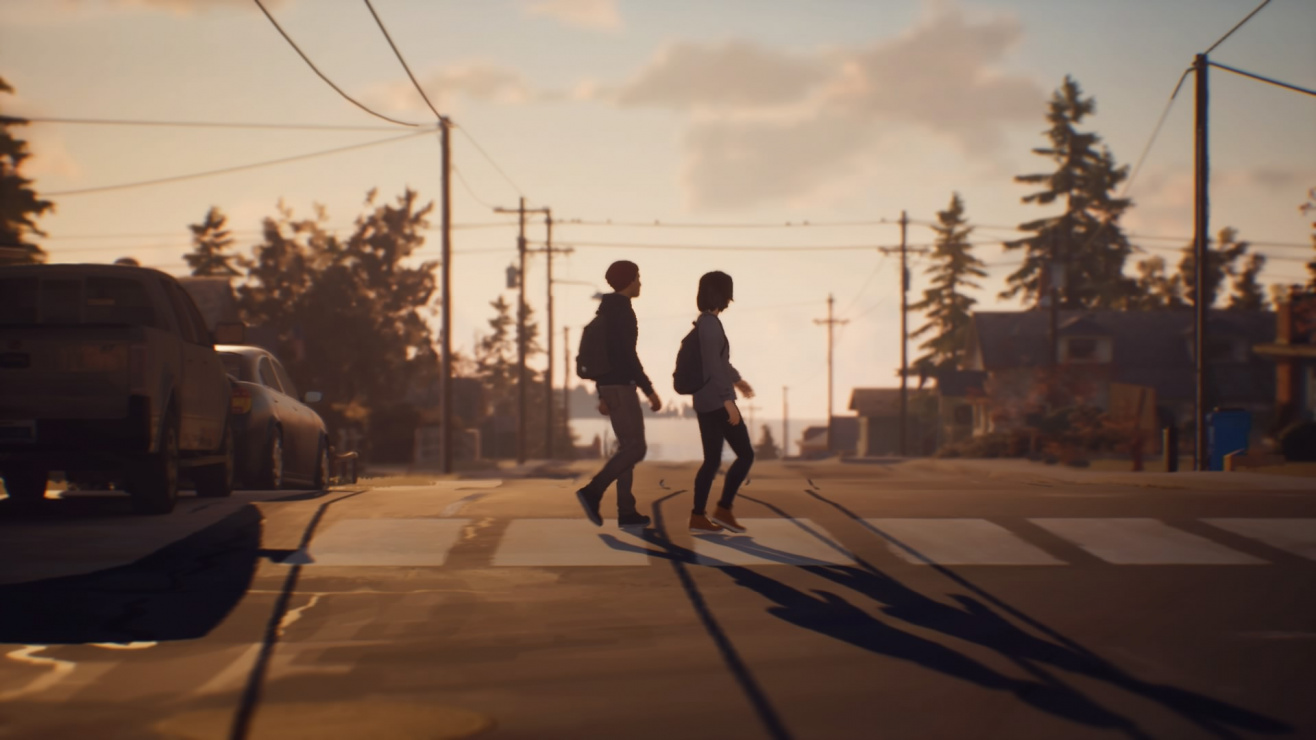 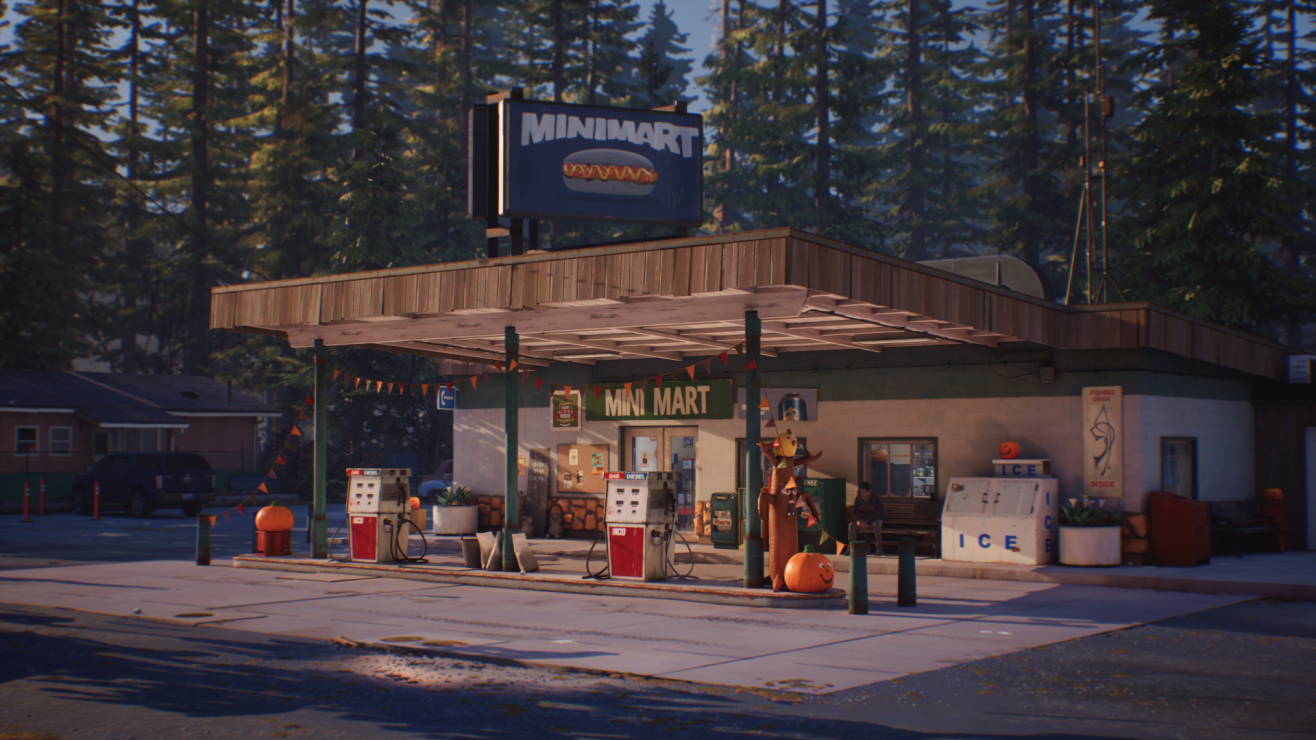 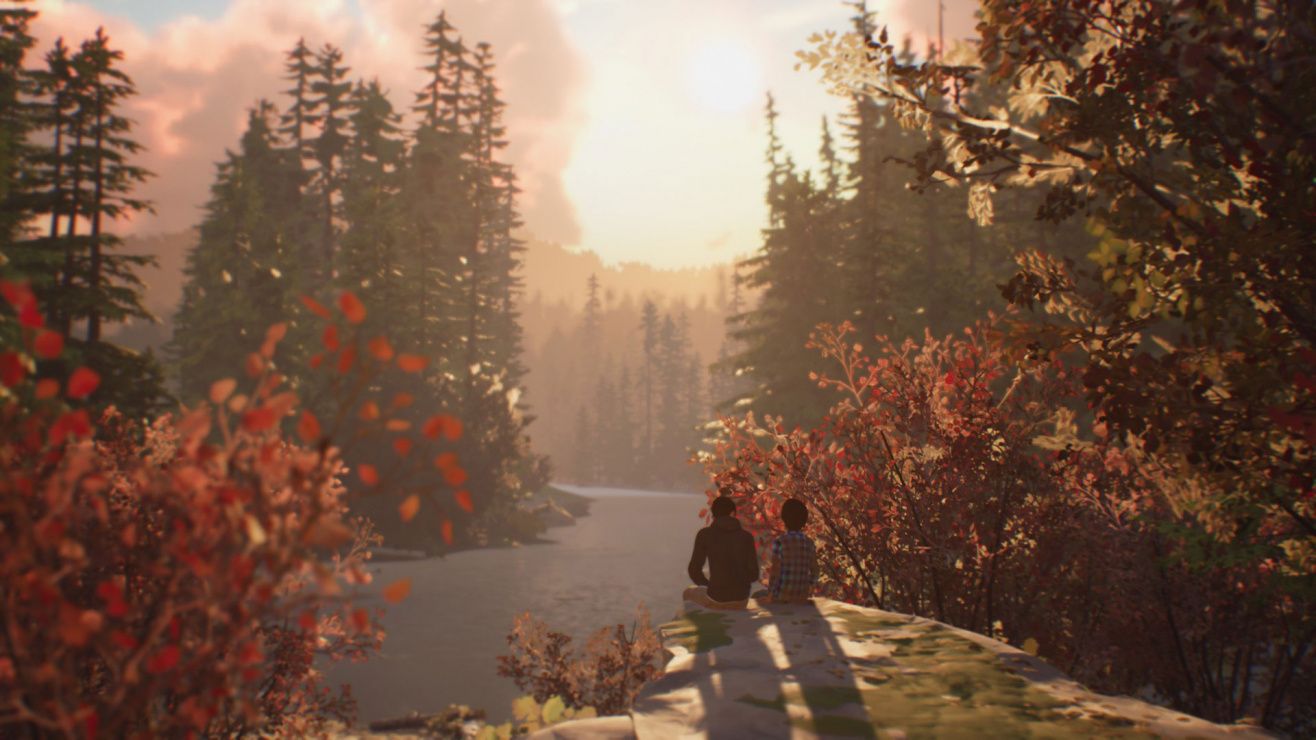 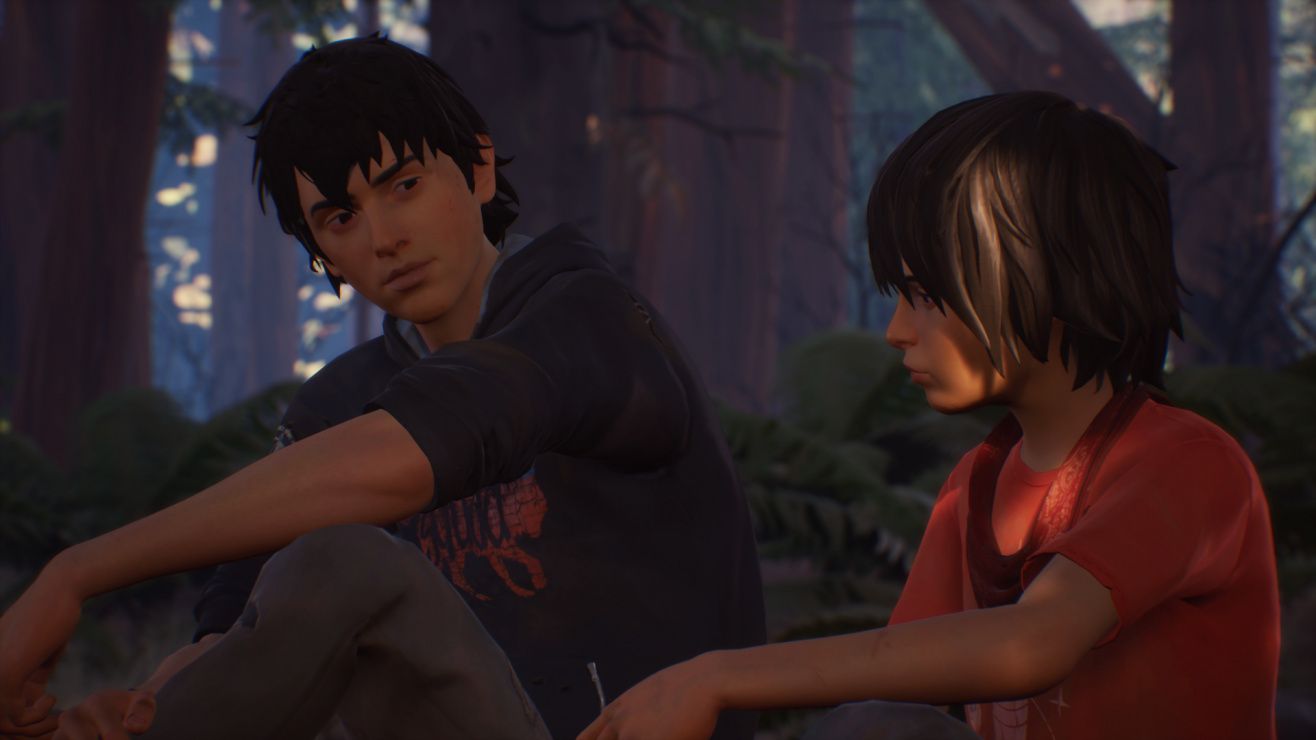 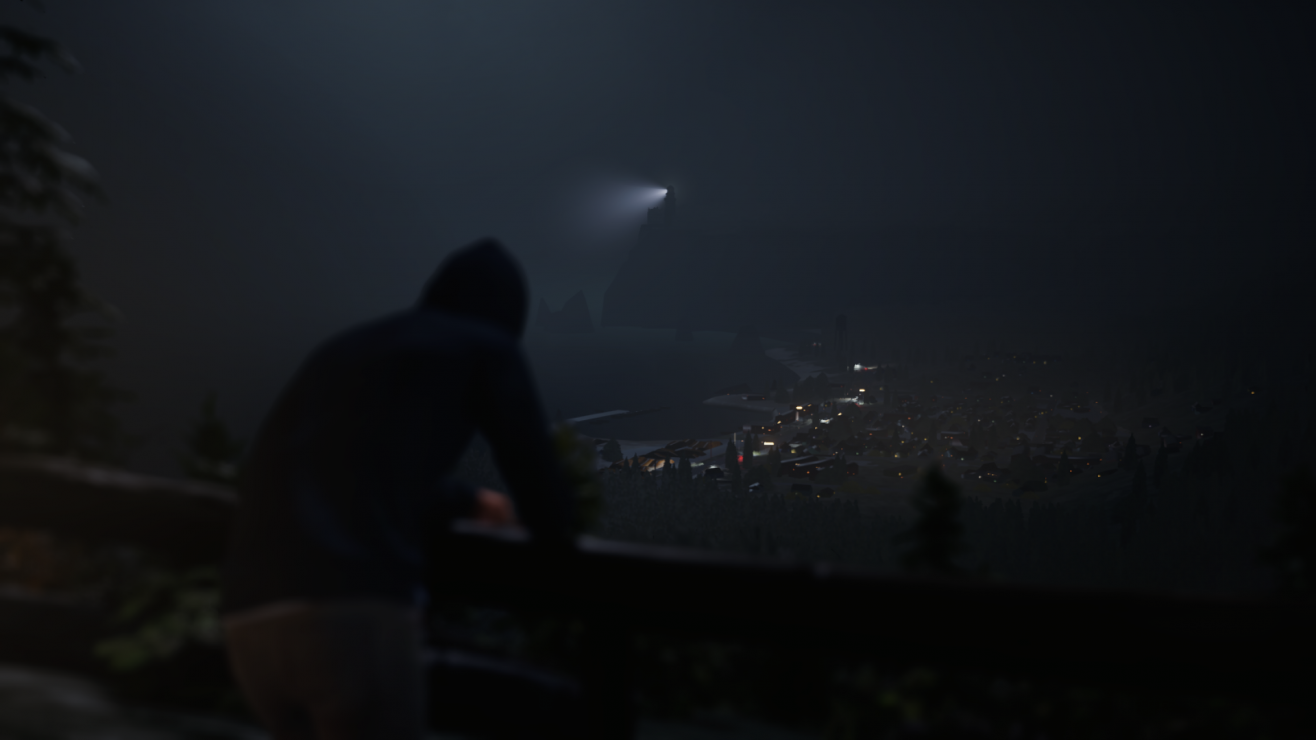 Gave me a month of depression

After the first game and Before the Storm it was completely natural for me to play this one too.
First two games were stories about growing up, rejection, real friendship, losses. These stories created a specific world in which each decision tells its own story - a story that brings smiles, or a story that leaves a void in the heart.
Life is Strange 2 brings something new. At first it all seems like one carefree upbringing of two boys with a caring father. Carefree growing up with first love, hanging out with friends, where the biggest problems were what to wear when going to a party, and what to buy as a gift. That carefree life suddenly came to an end. It was the first brutal sign that life is not the same for everyone and that we are not all equal.
That first moment, that first day marked the beginning of an exhausting journey... journey where the younger brother was to be protected, and to discover a safe path through all the troubles caused by racism, lack of money, and the constant dangers from the police not choosing the means to bring them to justice. The older brother was accused of being responsible for policeman's death, although it was all a tragic set of circumstances that led one after another to the worst things in society - discrimination, abuse, exploitation, sects.
Two brothers, two wolves had to find their way through the forest and on that way they realized that little brother is a super wolf.
He had a power that created an opportunity for them to find their way to safety. The way that led them to their grandparents, and to a small community in which they found a small part of heaven for themselves. But all that disappeared and the only thing left was to find their way to their father's birthplace. On that way they also met their mother and then they rediscovered at least a part of that carefree growing up from the beginning of this story.
I have left many stories untold and it is up to each of us to come to our own conclusions. This game is different from the previous ones. Many resented a number of things but I know how the game affected me...
The game have reminded me of what it looks like to be alienated and condemned by others.
What it looks like not to have your parents.
And what it looks like not to have your childhood.
But in the end ... in spite of everything, you manage to endure, to find yourself and to succeed.
You manage to find someone who will always be there for you... Unconditionally.
You manage to find happiness... and love.
After all, that is the only thing that matters.
Life is strange... and beautiful.
10/10

After I finished this game, I felt like I had explored more of the world just sitting at my computer. Damn – it really opens your eyes to the things out there, the decisions you take, the paths you explore. I haven't played Life Is Strange (the original), but saw this in a sale and thought it'd be fun from the pictures. I was not disappointed.

There are so many negative comments and tbh it kinda stops me from getting it at first. I'm glad I decided to play the game and see it for myself.
I never wrote any comments before (not even LIS1) but I think this game don't deserve so much negative comments just because it is not like LIS1 (which I see a lot). They are 2 different game and had their own uniqueness but I enjoyed both equally.
This game has its flaws but it doesn't stop me from falling in love with Sean after 30 minutes of the game. I got a little annoyed with Daniel at some point but come on he's a 9-year-old kid, all kids are annoying sometimes. I laugh, I cried, I got mad at those bigoted racists, and I got my heart broken when I'm playing this game.
And btw, this game actually offers more choices (and they mattered) compared to LIS1. You will get different endings depending on your decisions throughout the game. I can see the effort and heart the dev had put into this game.
My advice, play it and judge the games for yourself. It might be for you, or it might not be your cup of tea, but all I ask is to give it a chance and hopefully you will fall in love like I did.
#SEANISBAE

200 character summary
LiS2 is the third installment in the LiS series, It improved on almost every aspect, It has a great story with some shockers, Prepare to be mad sad and proud at the same time, An absolute must have.
Story 10/10
You play as Sean, You and your little brother Daniel will go all across the USA, And you will meet a lot of interesting people on your journey. You have to make choices that will affect you and your brother, Your brothers personality will change based on how you treat him. I can not give any spoilers, but you will see a few familiar faces from the last 2 games and a lot of new faces. Compared to the previous 2 titles LiS2 places the player in more moral decisions, It tackles subjects like Ethics, Faith and Justice. the story stands on itself, I still recommend playing the games in chronological order because it contains some spoilers for LiS.
Like before it is a single player experience, There is no online, No scores, it is 50% exploring, finding secrets, 50% cinematics, Most of the storytelling is done in dialogue by interacting with people, But the main story is told in cinematics. They really went all out this time, You can see the differences in detail, the scale of the environments. I have the feeling the story is at least 50% longer compared to the previous games.
There is a small free Windows only game called The Adventures of Captain Spirit, I have not played it before LiS2, But I would recommend to at least check it out, The choices you make there will have impact on LiS2, It adds another 2 hours of story to LiS2 but it is not needed. If you are unsure if you will like the game, I would really recommend to start with LiS1, The first episode is free.
Characters 10/10
The game has great characters, I especially like Daniel, He grows in personality as you progress in the game, Good or bad, The right choice is not always obvious. But he will take notice of your actions and the words you say. But it is not only Daniel everyone around you will see your actions, Even the most simple decisions in the beginning will haunt you back later even if they don't really change the story, There is a lot of detail put into the characters, All of them, A lot of backstory and personality.
Gameplay 8/10
Instead of rewinding time or having a smart mouth this time you have a little brother with telekinesis, You can ask him to do things, But he can still refuse, You don't have absolute control over the ability like in the first games. Your superpower is taking care of your little brother going across multiple states in the USA. There is an extra touch on morality in this game, You are an example for your brother. Would you steal or kill to feed your family? And how would that affect their lives? There is a great dynamic between the characters and it will force you to reflect on yourself.
Like the first 2 games the game is more of an interactive movie than a game, But it is very enjoyable, It is like starring in your own movie, You still get to make choices, You just don't need the attention you need for most games. Still the game will draw your interest through the excellent storytelling, Most of the times there is no right answer, It all comes down to ethics, What do you find appropriate in certain situations?
Aesthetics 10/10
The graphics look great, I would say it is an improvement over the previous games, But it is more visible in other things like mapsizes, Length, and other things mentioned before, I think LiS has its own unique graphic style that just looks amazing, I like that they focus on the main thing here, the story and it is amazing, I just want to play the entire thing again to get a different ending. The soundtrack is good, But not as good as the first game.
Performance 9/10
It runs amazingly, Especially for an Unreal Engine game, Most of them have at least some issues, It shows it is possible even if it takes the genius people at Feral to accomplish it. I had no crashes, stutters, bugs or anything like that. Everything seems to work just fine.
Replayability 8/10
It is replayable, And it can give you a different ending and different outcomes to the smaller things in the game, But You will always play the same main storyline, Small details will change but it is mostly dialogue you heard before. Ofcourse you can replay the chapters to get all missing collectables, and I would recommond playing the game at least twice to find all the little things you might have missed, It is funny how you play something different if you know what is going to happen because of it.
Conclusion 9/10
Overall the game is another must buy if you liked the previous games, It improved on almost everything, I like that they brought back a real superpower, But Rewinding time was just a much much better fit for a game that revolves around making choices. I think this story is better, But the main characters in the first game just spoke to me more. Oh and the game has t*tties!
Follow my Curator Page for more Reviews like this
Game Info
# of players
Single Player only
Steam Cloud Save
Working fine
Controller Support
Yes, Xbox One Bluetooth Working
Achievements
A little too easy
FPS on Ultra 1080P
60 - 140 FPS
Launch Command
none
Installed Size
40GB
Issues
None
Operating System & Hardware
OS
Arch Linux
Kernel
5.4.10
DE
Gnome 3.34.2
CPU
Intel I7-6800K Hexa Core @ 4.2 Ghz
GPU
Nvidia Geforce GTX 1080 (Nvidia 440.44 Drivers)

Life is Strange 2 is good adventure, with a story about growing up, moral challenges and society issues. The roadtrip character of the narrative offers a great variety of sceneries but also comes with a lot of problems like lackluster side characters.