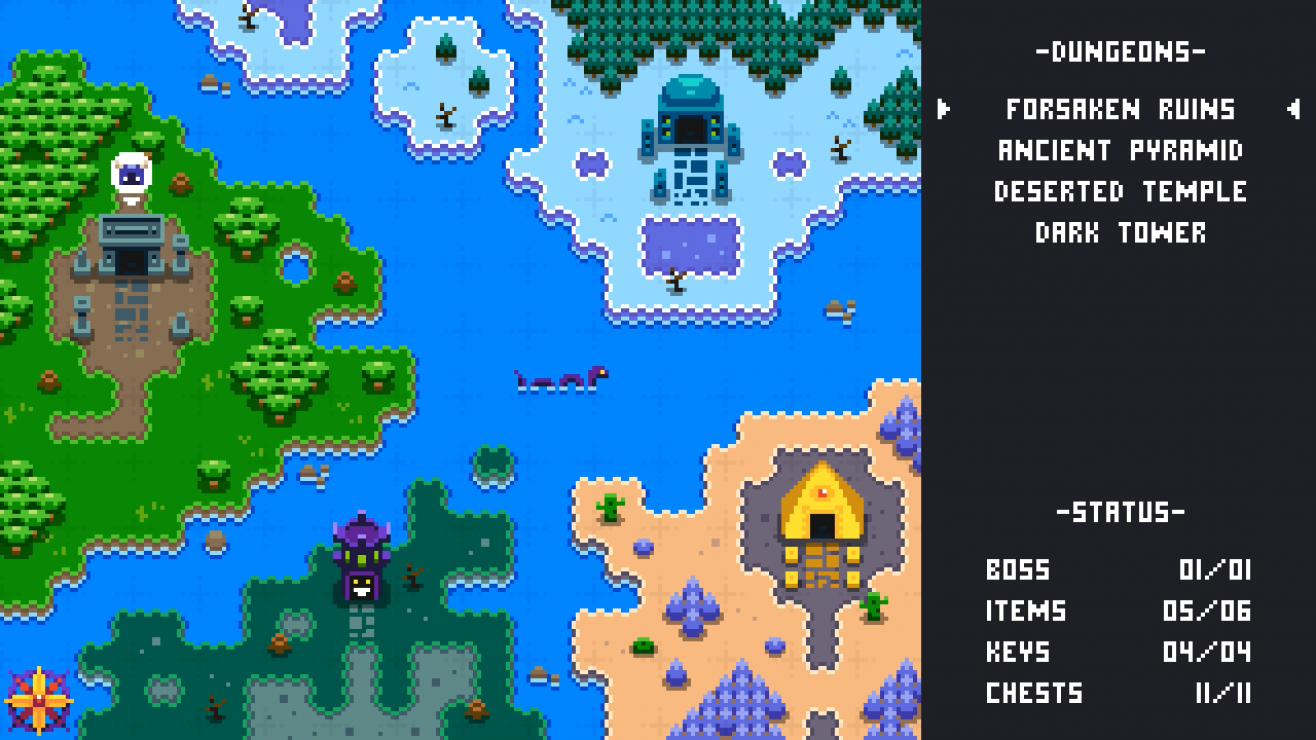 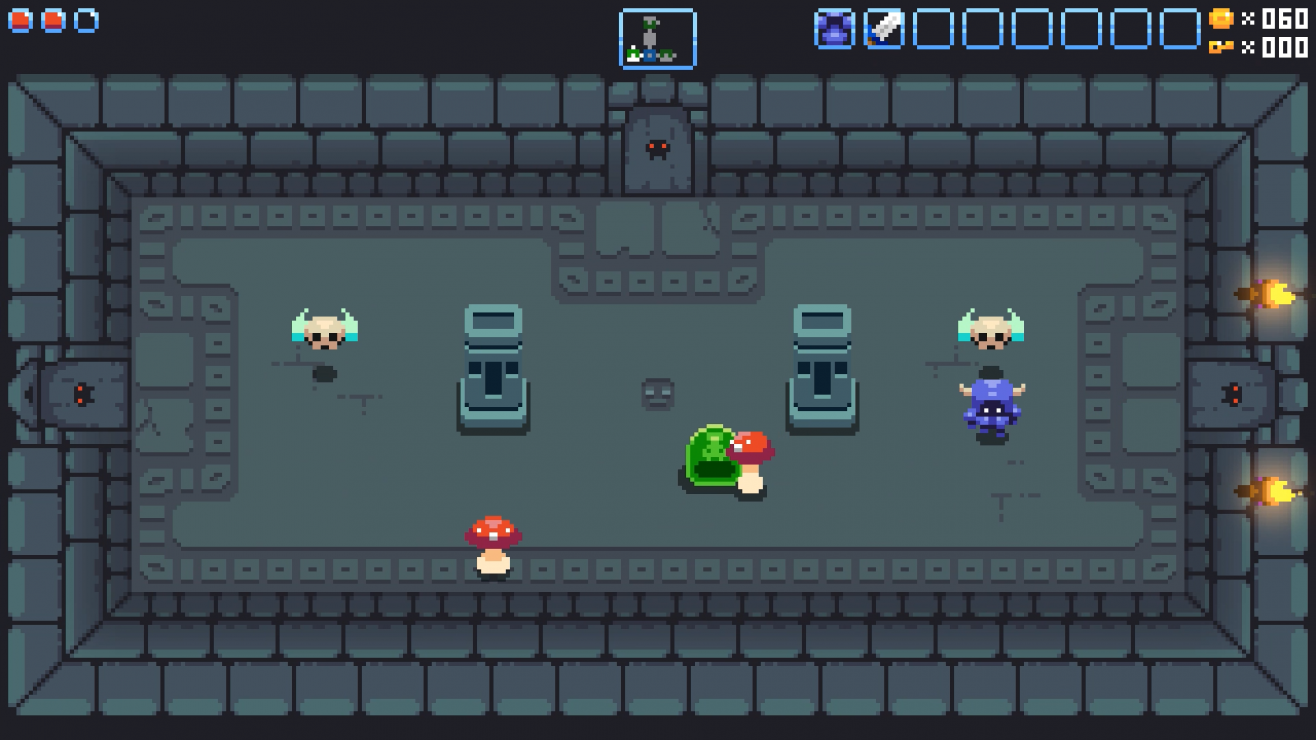 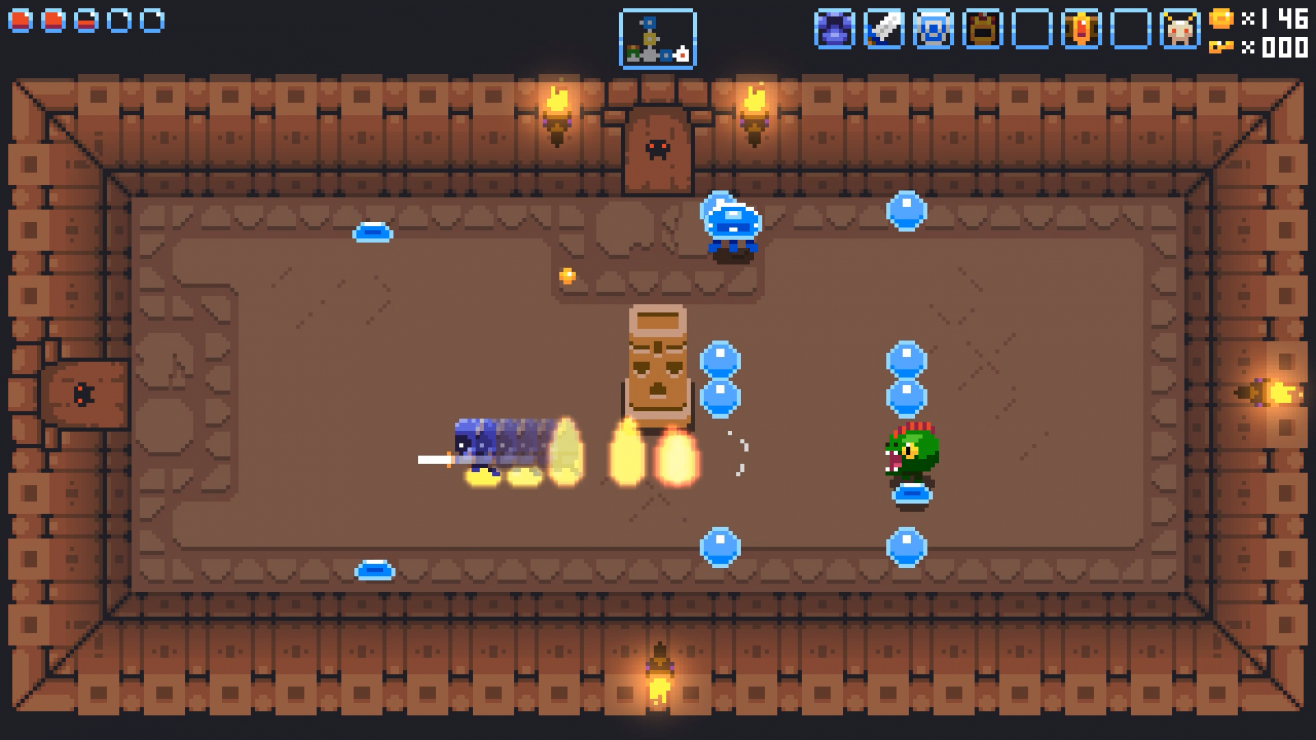 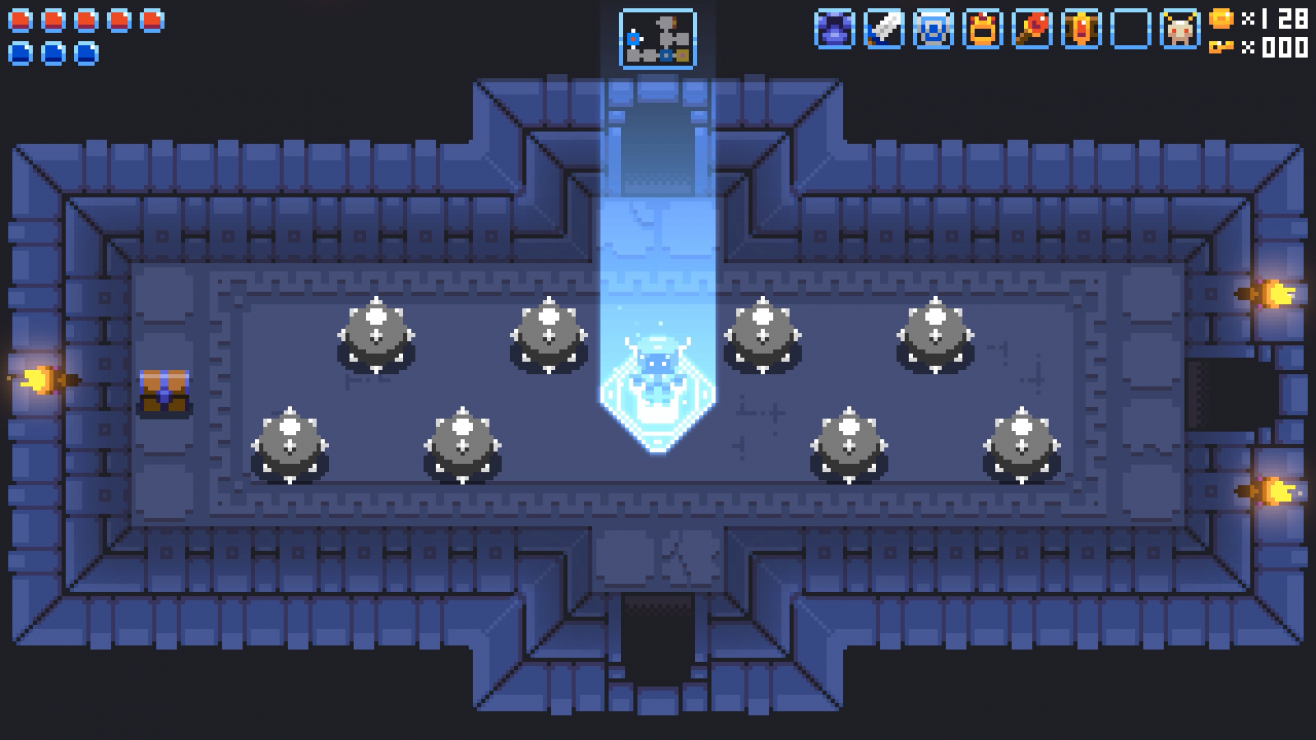 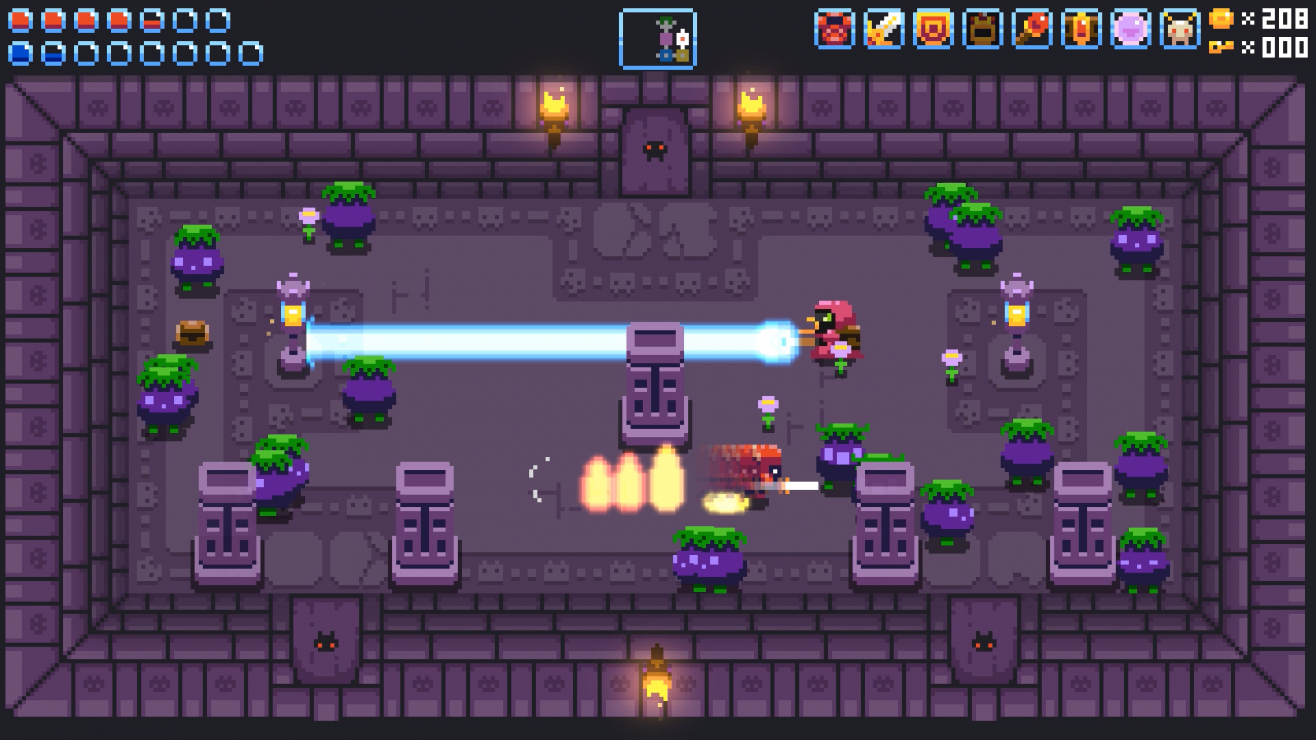 PC Steam action indie adventure fantasy puzzle retro exploration dungeon knight zeldalike pixelart zelda
This demo contains only the first dungeon. Join brave sir Lootalot on his epic quest in this little Zelda-lite adventure. Explore and fight your way through the dangerous dungeons filled with traps, puzzles and magical artifacts. And, of course, show the evil bosses who is the real boss here. Knightin'+ is a classic adventure game made by one person (yep, it's me) inspired by the amazing masterpieces from 90s. So what can you expect from this game? Let's sum up: Classic adventure gameplay (i.e. explore the dungeon, fight monsters, solve puzzles, collect loot, unlock new abilities, proceed to the next dungeon). Tongue-in-cheek story (that shouldn't be taken seriously by any means). Stylish pixel art graphics. Catchy soundtrack. Full controller support.
Share Share Share
Promote for 50G

200 character summary
Knightin is a short but nice game, It has beautiful graphics, nice controls and some solid gameplay. Solve the puzzles and defeat the monsters in this short but worthy zelda like dungeon looter.
Story & Characters 7/10
There is a little story, But it does not take itself serious at all, The game itself calls story dialogue crap, There is no princess, Just a knight named Sir Lootalot who likes to loot dungeons, There is not much to say about him.
Gamemodes & Gameplay 9/10
The game has just 1 gamemode, but you have multiple saveslots, When you start a game you get to the dungeon overview, There are 4 dungeons which can be completed pretty fast, Some dungeons have 3 floors and others 5, but the dungeons are always a 4 by 3 grid of screens with a nice map, There are keys, locked doors and puzzles which may take you a few minutes to solve. Each dungeon ends by defeating the boss on the last floor behind a locked door.
Your knight can move freely around in every direction, There are lots of weapons and upgrades, You can slash your sword, Defend with your shield, Do a dash attack and Fire fireballs, There are also upgrades which make you stronger, give you more health, magic, Or give you other useful abilities. Most upgrades are found in chests, But some must be bought from the shop, Here you can also refill your health, Enememies drop health pretty often. You earn money by looting it from enemies or chests.
The controls feel right, I love the gameplay, The bosses are all unique, and just bashing in on them won't work, You really need to learn the short patterns and figure out how and when to hit them. I do think it is a bummer it is so short, There is no random generation so it will get old pretty fast, More content could make this game a masterpiece.
Graphics & Soundtrack 9/10
The graphics look beautiful, All sprites look amazing, Some monsters are a bit out of place, but I guess it fits the general theme of the game. All dungeons look unique have 4 unique monsters and unique bosses, They all look very different. Even the menu and dungeon selection screen It finds beauty in simplicity. It also has some pretty nice animations.
The soundtrack is short, But also done really well It has some catchy tunes and you can also get the soundtrack seperatly. The dungeon tracks last about 2 and a half minutes, Which is very short, But you don't really notice that ingame. The soundtrack just fits the game really well, You can hear they did take this part very serious.
Performance & Support 7/10
The game itself runs fine, It is locked at 60fps, but there where no drops. there is a small issue however, Steam Overlay is not working for some reason, This is not a huge deal, But it is an issue.
Endgame & Replayability 7/10
The game is sadly very short, There is no procedural generation, No story, no lore, collectables or anything like that, Surely there are chests, But if you really explore the maps it is almost impossible to miss anything, There are 2 achievements which require you to finish the game without dying and another which requires you to finish the game in under 90 minutes, Which are quite the challenges. If you really like these zelda like games you might enjoy a few playtroughs, but it will get stale pretty quick.
Improvements
More dungeons, all with their own monsters and bosses. Surely the nice graphics feel a bit wasted in such a short game, I think 8 would be a nice goal, But something like 16 would be insane, Maybe in the form of DLC?
I would also love to see an overworld, Surely the select dungeon screen is nice, And I love the easy access, But there is a whole lot of unused potentional. Imagine everything you could do outside of the dungeons.
An actual story mode, Maybe keep it in the "I don't care" style, but give it a bit more, Like an extremely dumb or sl.utty princess, or a talking "Deku" tree who talks to you in such old english that is not really understandable anymore, Give your knight a bit of attitude and making smirky remarks maybe break the 4th wall, I don't know, Let your creativity go wild.
Conclusion 8/10
Knightin is very short, But it looks very nice, and the gameplay is solid. Don't buy it for a story or something that has a lot of replay value, But if you like a small dungeon crawling puzzle game with some solid gameplay it is certainly worth the asking price.
Follow my Curator Page for more Reviews like these
Game Info
# of players
Single Player Only
Steam Cloud Save
Not Available
Controller Support
Bad mapping with Xpadneo
Achievements
A few hard ones
FPS on Ultra 1080P
Locked to 60?
Ram Usage
150MB
Installed Size
200MB
Launch Command
gamemoderun %command%
Issues
Steam overlay not working
Operating System & Hardware
OS
Arch Linux
Kernel
5.5.7
DE
Gnome 3.34.4
CPU
Intel I7-6800K Hexa Core @ 4.2 Ghz
GPU
Nvidia Geforce GTX 1080 (Nvidia 440.64 Drivers)

Knightin'+ is a decent zelda like game but the puzzles seem a bit harder and the map is rather well done. there are only 4 levels and you'll get the next by beating the former. you can leave and come back to any of the dungeons to buy and pickup items you may have missed. the puzzles seem a bit harder then zelda mainly the face tiles you light up. throughout the dungeon there are little face tiles or blank circles and you are supposed to remember these then repeat them with the bigger faces. i also had issues on level 3 finding the one teleporter (out of 20+) that took me to some stairs to find the last key i needed. the bosses seem to also have a difficulty spike but there's normally a save right before them so it's doable. not hard but i do feel is a bit frustrating so i'll finish this up later when i'm in a better mood.
Knightin'+ is a well done game but if you're not in the mood for some puzzle solving i'ed go play binding of isaac instead.
6/10

I got this game for 2,99€ and I can full heartly say that it was worth each cent of it.
Pros:
+ It got a Demo that allows you to check the full first dungeon out before buying
+ It got nice and dynamic 8-bit music that change when you pause or enter a shop
+ Controlls are easy to understand but figuring out how enemies work and how to fight them the best way possible keeps things challenging - exspecially when you get a room with different enemy types that synergize very good together.
+ There are a lot of puzzles, including multiple sokoban sections, but also a lot of combination locks need you to find a clue on a floor to complete. While the one in the Demo is pretty much free, there are a lot tougher ones later on that really need you to keep your eyes open. Since there is so much variety in how the hints are displayed, it makes each combination lock feel special and not repeative. And there is ALWAYS a hint that makes it obvious what the combination is - if you found and understood it.
+ Many collectibles and optional collectibles along the way
+ Previous dungeons can be re-visited
+ Coins will automatically fly towards you from the beginning - no tedious collecting to grab all
+ Each boss is unique and got some sort of trick that you have to figure out in order to kill it. Definitelly close, if not on par with Zelda games.
+ Good humor that is a parody on other games of this genre.
+ Small simplistic but informative map
+ Very cheap game price
Cons:
- The last dungeon did feel much easier than the previous one. Or to turn it around: the third dungeon's difficulty felt out of line. (In exchange, the last dungeon is far larger and got a focus on puzzles instead of enemy strength)
- Horizontal green turret lasers make no sense at their horizontal shooting position
- The ranged attack is off-centre
- Only dungeons without surroundings to explore
- Each floor of each dungeon got each possible square on the map filled, which leaves no room for unpredictable hidden secret rooms.
Overall I would say that it is a well made Zelda-like game, which only focuses on the dungeons and combines puzzles with fighting in the right balance.

This is a Zelda-like game but there is no exploration or secrets, you just go through a few dungeons, fight some cute enemies, solve a few puzzles and then defeat a boss and move to next dungeon. There are four different dungeon styles you have to beat in total. Gameplay is fun, but I feel the it is a little overpriced because the game is rather short

Great little zelda clone, done in 2 hours or so for a casual first time.