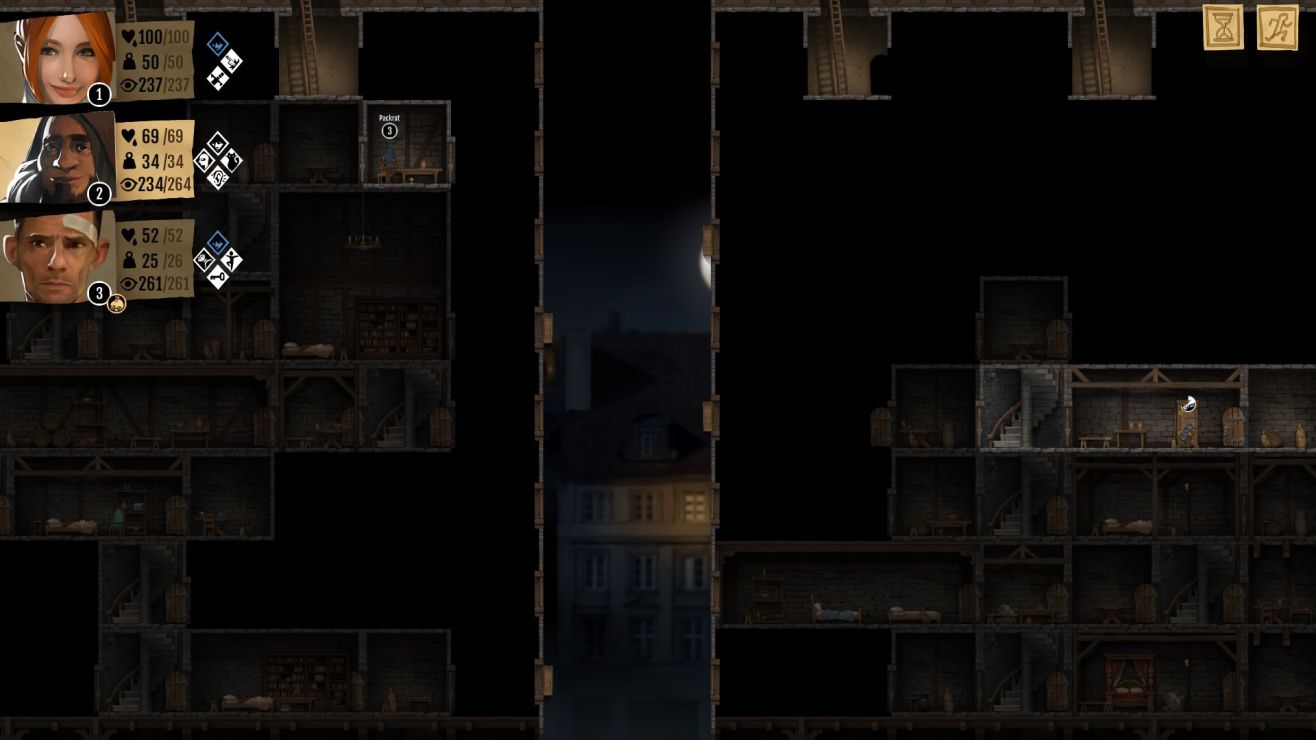 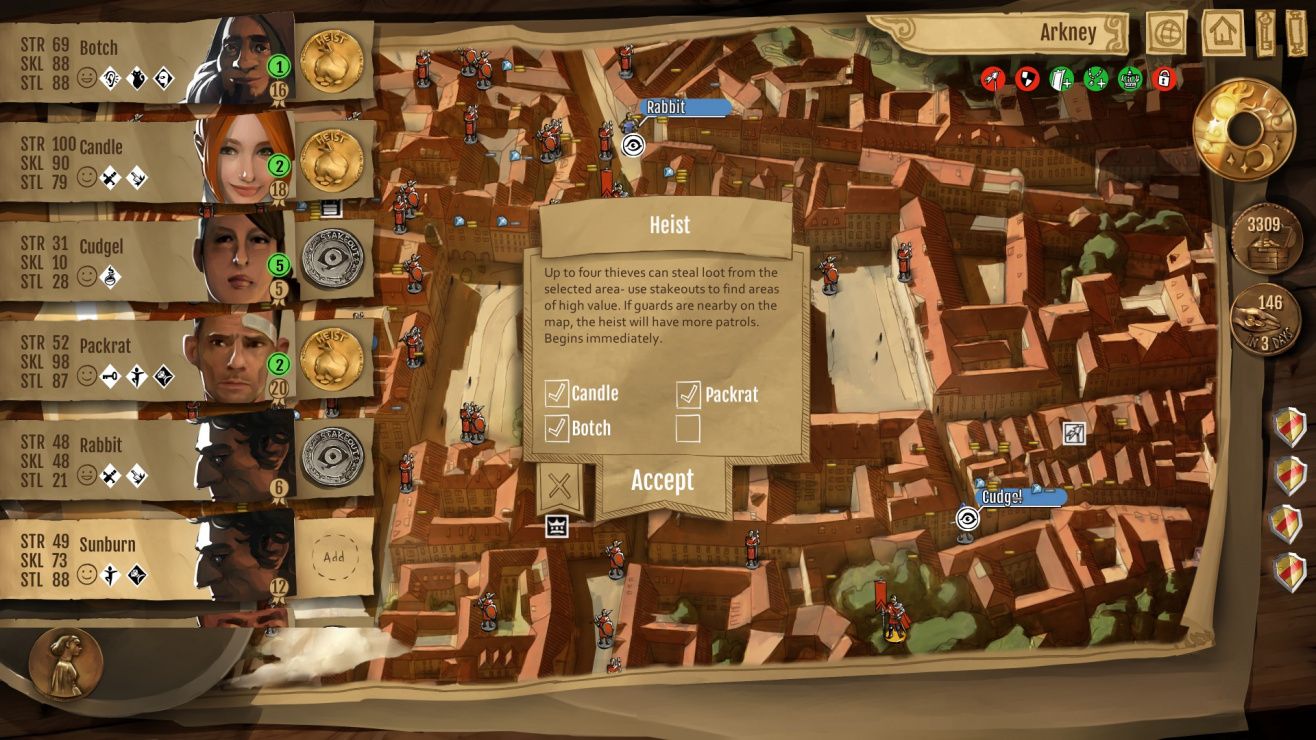 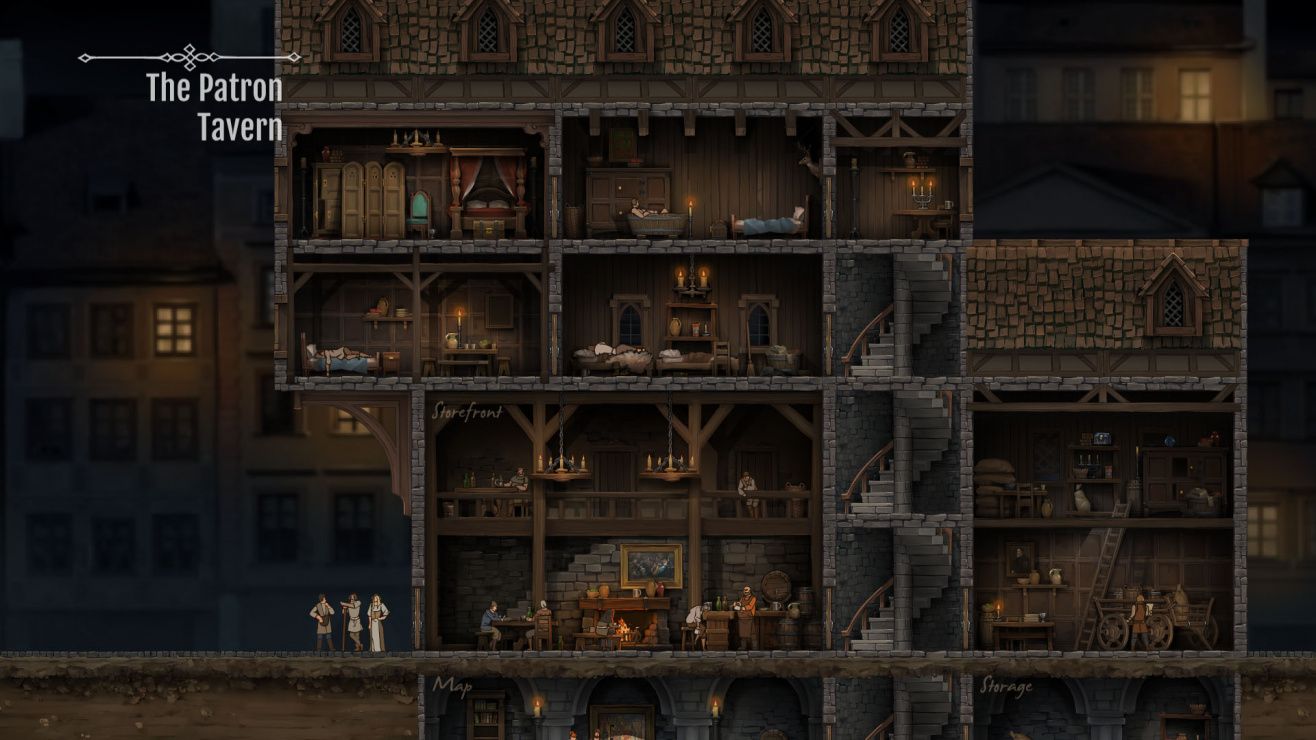 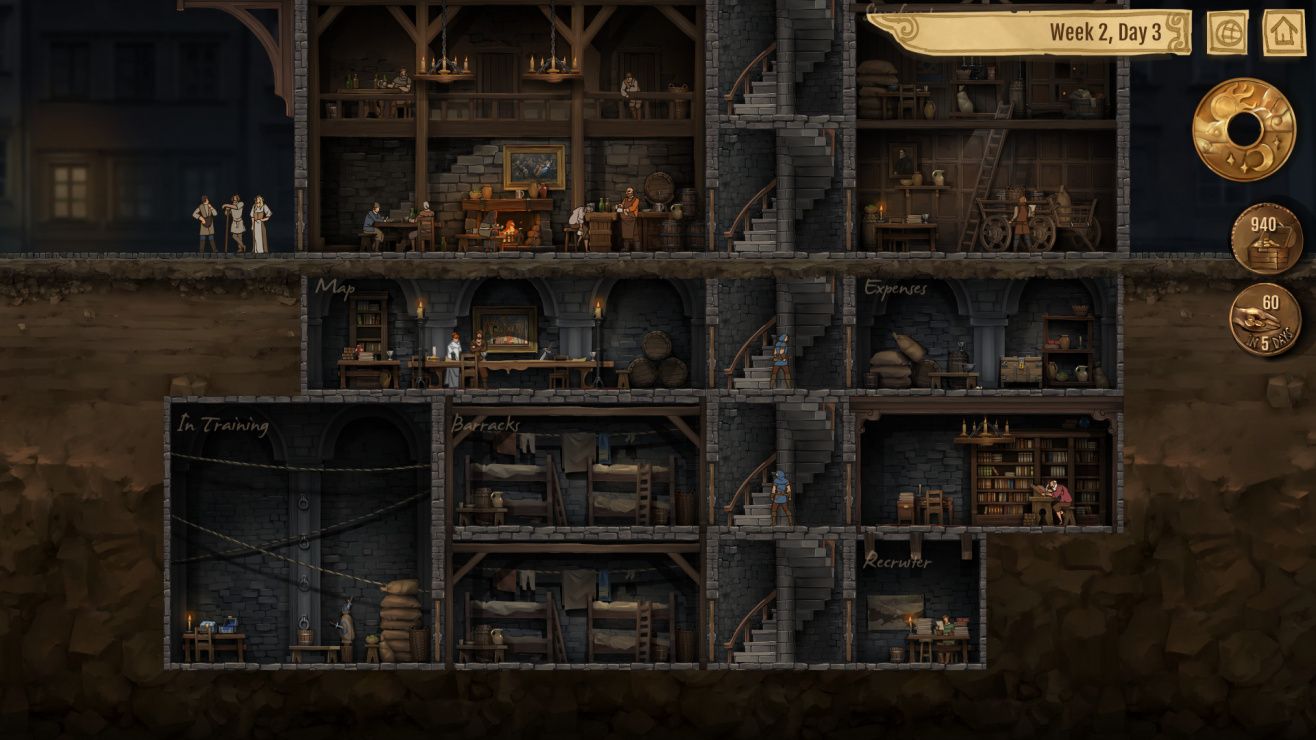 action city indie logic rpg simulation singleplayer strategy
Take the city then take your revenge in Killers and Thieves, the guildmaster adventure from the co-creator of the Banner Saga series. You are the unseen master of a thieves’ guild in the medieval city of Greypool, taking ragged street rats and forging them into master criminals. Assemble and train a team of unique burglars, thieves and cutthroats then send them on daring heists across a sprawling city. Select your team carefully - do you want the agile catburglar, the master lockpicker, or the deadly cutthroat? You can’t always take everyone you need, and the city is full of surprises that will force you to redraw your carefully-laid plans at a moment’s notice. You decide the degree of risk: you could play it safe, but great riches await those bold enough to chase them—but then, so does the hangman’s noose. You are the guildmaster. Send your ragged crew out on daring heists to stake out targets, steal precious things, and even perform assassinations.
Share Share Share
Promote for 50G

When I first got this game I couldn't stop playing it. However, 25+ hours in, it's losing its lustre quickly. Those 25+ hours though were definitely worth it. So let me put it like this:
Pros:
- Stealth puzzle gameplay is fun and addictive.
- Thieve's guild management is something I'm really into.
- Immersive heist missions.
- Solid and challenging learning curve.
Cons:
- Micro-management of money with loading times.
- Repetitive art assets. Probably the biggest reason why it will start to feel repetitive.
- No chance of 0 murder runs. I feel less like a sleek thief and more like a grubby bandit.
Despite these cons though, I still recommend playing it... as well as waiting for some good future patches!

Caveat: I've been wanting a game very like this one for many years before it was released, so it's possible my glasses are slightly rose-tinted.
So first: I can see why the reviews are mixed. For my first several hours in-game, it was extremely frustrating. I was trying to make it work the way I thought it should work (since there really isn't a great deal of guidance), and...it wasn't working. Beyond problems on the heist, I had no grasp of the shop system for a bit, so my first few attempts were a tale of money problems and dead or imprisoned thieves.
And then something clicked.
And oh man have I been obsessed with this game since. And I'm still within the first 20-25% of the story!
Some pros:
It's a legitimately thrilling, rewarding experience to make that narrow escape with all the loot. A+ on capturing "the feel of the heist."
If you've ever wanted to have your own adventure in Lankhmar, this is the closest you'll get at the moment. The art and atmosphere make me feel like Fafhrd and the Grey Mouser could pop up any minute.
Suitable price for the content, in my opinion. Great price when you consider how niche the subject is.
That je ne sais quoi certain games (XCOM series and the like) offer whereby the player develops complicated relationships with the in-game crew.
U/I and functionality: it looks pretty, it works, and it hasn't been as buggy for me as some of these reviews would indicate.
Music is pretty perfect.
Some cons:
I've come into contact with one very minor bug so far where a story-quest resolved without me being able to see the result. Pretty minor.
There are certainly some areas of gameplay which could be tweaked or expanded. Sadly, that doesn't look likely to happen. And that's a damn shame.
Probably the worst thing is how opaque certain gameplay elements are until trial-and-error teach the player how a skill or mechanic works. (The "climb" skill is still basically a guaranteed death-sentence whenever I try to use it.)
Okay. That's about it.
Buy it! Enjoy!

I'm going to recommend this game simply on the fact that the developer seems like he really wants to make the player base happy and is doing a lot to fix the issues.
That said, I think my biggest observations with the game are:
* UI / Controls (been said)
* First mission has you controlling 4 people. I think they should start you solo and slowly introduce mechanics.
* Mechanics need a LOT of work. Many of them just get in the player's way of having fun.
* Art is amazing of course.
* I expect a lot from this developer and have no doubt they'll deliver. I'm looking forward to releases in the next 3-6 months.
One extra thing. The actual management of a guild looked like the most fun to me. I understand scavenging, etc in the style of "This War of Mine", but I think until things are on par with those level of mechanics, that maybe I'd rather even have an "auto-heist" option with a chance of success or auto-pilot mode.

<First review, pardon the dust>
This is an awesome idea. And, I'll continue to play it despite the limitations.
But there are some things that just fall short.
First the great things:
1. The art is thematic and very moody. The maps are the same,
2. The story is a revenge story: a oldy but a goody.
3. A lot of the systems for the game feel well thought out: having to fence goods and train thieves. Culprits being caught and carted of to jail. Heat levels in different zones.
4. The *concept* of the heists are beautifully simple, the complexity is in the execution.
There are some large howevers.
1. First, it is a rogue-like. While I'm not traditionally against rogue-like games, the problem is that the game is not a procedurally generated. The story mission are the same, time and again and so on your third or forth attempt, the playthrough can be a little stale. A single fallback savepoint (every week, for example) would be enough to avoid this (and the points in subject 2 below.
2. Third or forth playthrough you say? After only 10 hours? Absolutely. There are a bunch of reasons that can fail you in this game, and the frustrating thing is more or less, there's absolutely notihing to be done. My first playthrough I ran into a mission where I needed two knife fighters. I could not recruit a second one for love or money. When I finally did, he was fairly unskilled and perished in the attempt. Moments later my second skilled knife fighter fell to the same guard - failing the mission.
3. How did the knife-fighter die you ask? In combat of course, fighting a low-level guard while my second knife fighter stood behind the guard doing nothing. Her knife was out, but she wouldn't engage the guard. After carefully maneuvering the guard into a quiet area where he could be attacked from both sides, only to watch him methodically cut down my junior fighter and then turn around and kill (capture) my guild leader.
4. The stealth mechanic is also a bit broken. The guards have no discernable pattern - making it impossible to "get the timing just right". It's more a function of blind luck - which detracts from the overall experience. If all your careful gameplay can (and routinely is) invalidated by a RNG because the guard randomly starts moving in the direction of your thief it can be quickly demotivating.
5. The game runs just too fast. Although you can take crews of up to four thieves, in reality, you'll only ever be able to use one or two at a time. if you have more than that in a building at once, it's likely that a randomly moving guard will stand near enough to a motionless thief to start detecting them before you can really do anything about it. Then your choices are run (and be spotted - quickly decreasing your stealth pool) or wait and hope that he moves on before you run out of stealth pool and captures your thief. Both are "meh" choices - they feel passive, defeating the idea that you are actively able to change the fate of your thieves.
6. Some niggling things - you can change the nickname of your thieves, but not their appearance. On one playthrough I ended up with four thieves with the same portrait - two of them were knife fighters and accidentally sent the junior on heists a couple of times. Since the only parameter I can alter is the nickname their names were changed from Sharp and Boots (admitted awesome streetnames) to SrKnife and JrKnife. As well, there are some thing that just are not documented anywhere: if you click on a map, it bring up a menu to Heist or Stakeout - who knew? Not I until my second attempt - leaving me wondering if there is just a bunch more stuff I just don't know about.
Ultimately, will I continue to play this game? Absolutely. Mostly because the idea is fantastic. Why someone hasn't (to my knowledge) exploited this idea before I don't know. The developer has been active in patching - I'm hoping his frustration levels will not max out before he's done.
I'm conditionally recommending: go in with your eyes open and you won't be disappointed.