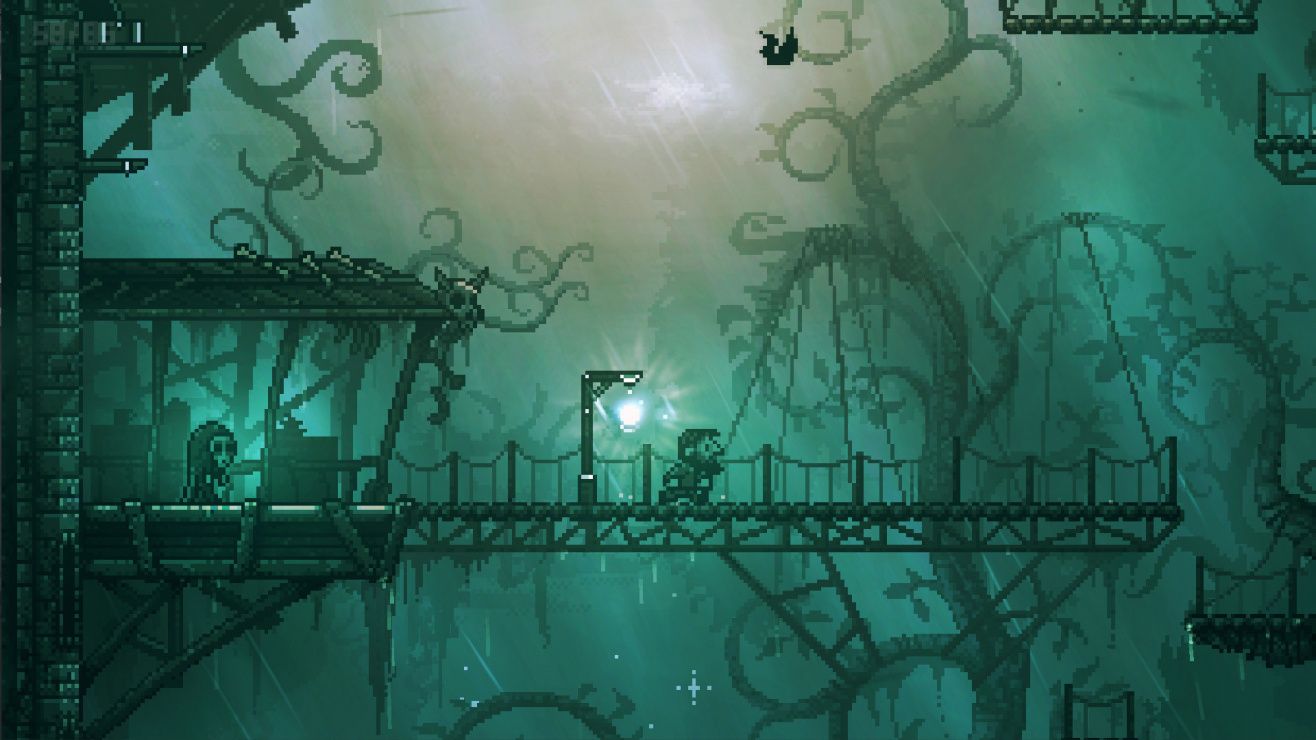 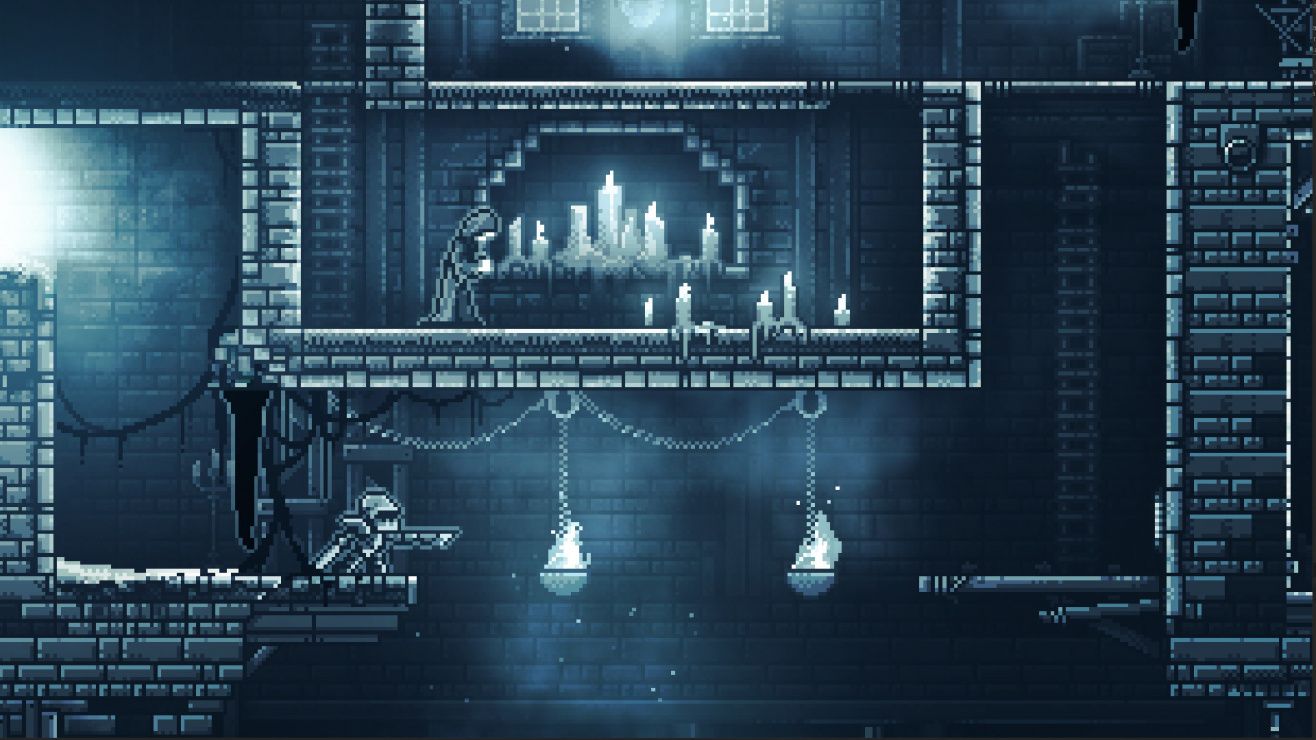 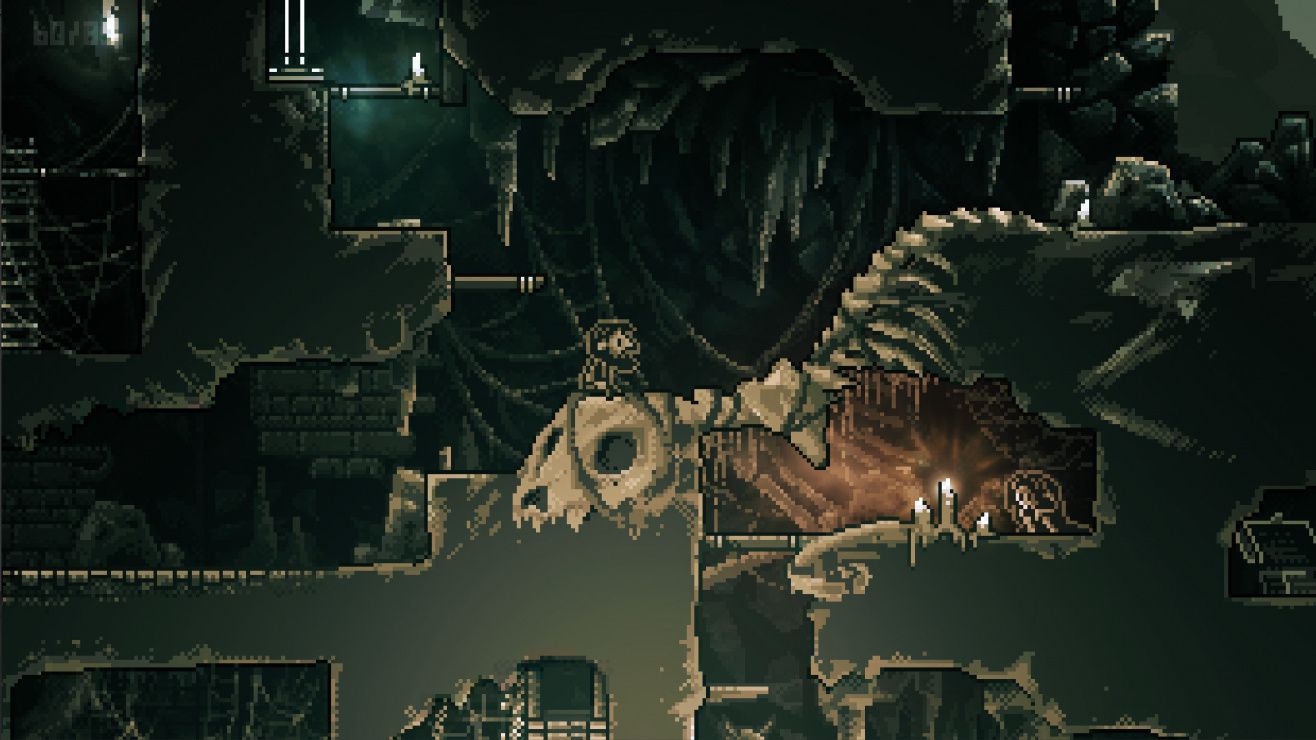 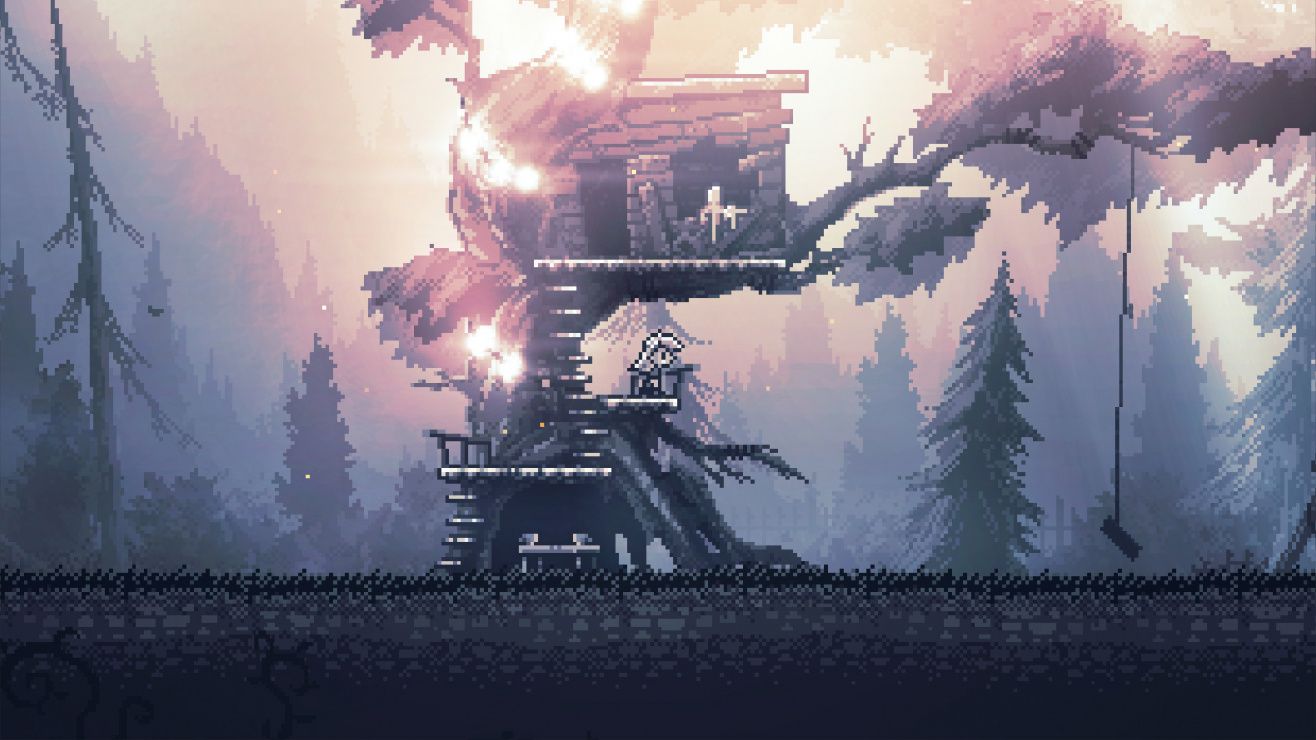 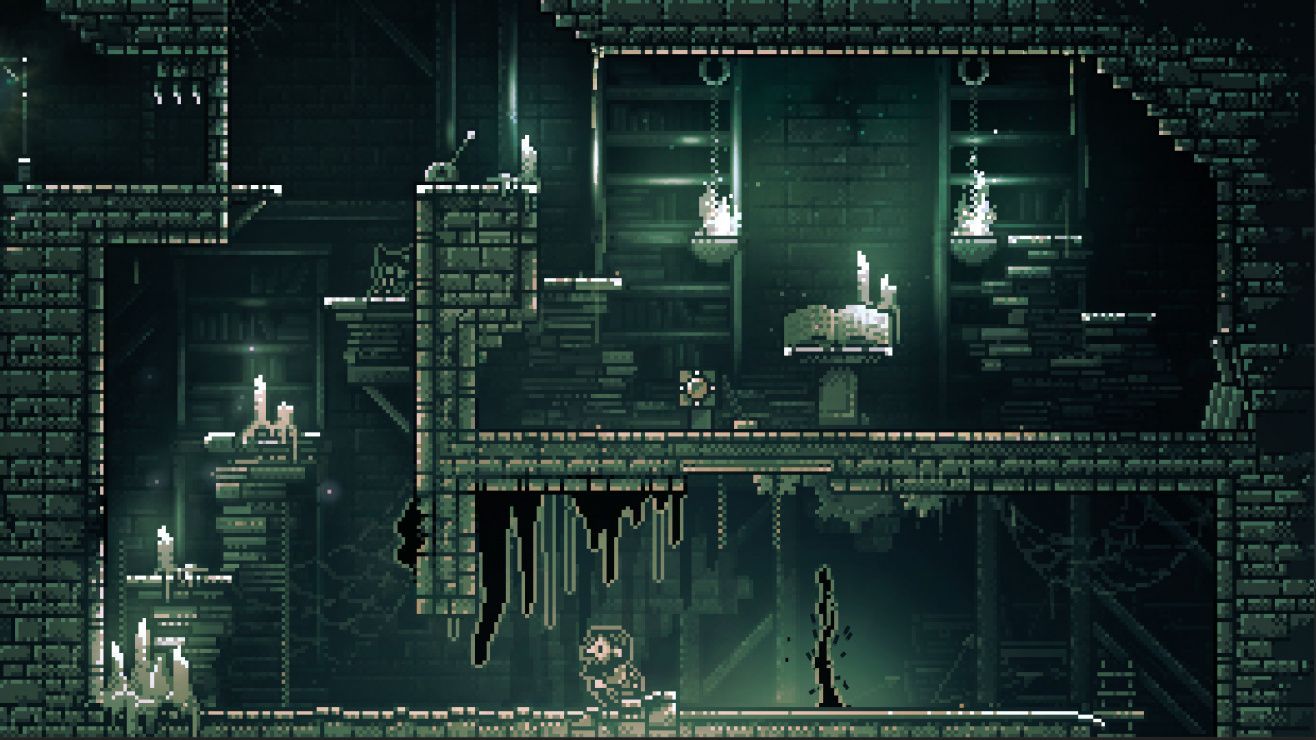 PC Steam Console indie adventure Nintendo platformer puzzle atmospheric iOS horror dark exploration metroidvania
INMOST, by Lithuania-based indie studio Hidden Layer Games, is an emotional and deeply atmospheric narrative-driven puzzle platformer. Uncover the story of an adventurous young girl, a stoic knight and a man in search of answers. Venture through a hauntingly atmospheric pixel art world 3 main characters, each with their own unique gameplay styles A knight adventures into the depths of a deteriorating castle. A child uncovers the past of an eerie house. A wanderer searches for answers. Lure enemies into lethal traps, solve environmental puzzles and utilise your scythe, hookshot and pickaxe to avoid a gruesome end! Discover a 3-5 hour emotional story, intended to be played in a single-sitting on a dark, stormy night Explore every nook and cranny to find secret passages and collectibles Featuring the vocal talents of Andrew Dennis and Cassandra Lee Morris Playable in 14 languages, including English, French, German, Russian, Spanish, Italian, Arabic, Dutch, Japanese, Korean, Brazilian Portuguese, Turkish, Simplified and Traditional Chinese Each pixel is placed with love! Features CORSAIR iCUE RGB dynamic lighting functionality for PC
Share Share Share
Promote for 50G

UPDATE: Just finished the game, and I can easily say the game is about something that should be talked about more. Very few games tackle the concept of pain, happiness, depression, and how serious of a problem it is if left alone. It grows, amplifies, becomes overbearing. INMOST is every bit as amazing as the rest of my review makes it sound, albeit a bit niche.
If there is only ONE thing I do recommend this game for, it would be the sound and ambience design. The colours though limited, get the current emotion across beautifully and the sound design is truly the superstar of this short, thoughtful game. I enjoyed every second of this game.
It is not a fairly simple game to be honest, and I was a bit annoyed by the initial difficulty suddenly plateauing, but the narrative and sound design more than makes up for it in my opinion. This game is NOT for you if you are looking for a challenge, or something short.
The colours are creepy, the sound design is great, and you can see the love and effort put into animating and overall game design. It's fluid, you can feel the characters get sluggish after a big jump, run when there's danger.
There are 3 characters you play as, and each play very differently. I am hoping at some point it becomes clearer how the 3 are linked. The world is scary, creepy, and I felt unnerved and nervous plenty of times.
Highly recommend this to anyone looking for a narrative game that focuses on a different concept than most games (UPDATE: I originally wrote clever puzzles, but I was wrong as they simplify quite quickly and focus more on the narrative exclusively)

This is a game that is slow and not driven by its gameplay but rather the narrative and atmosphere that it conveys. It tells a moving story in a visually impressive environment and the soundtrack does its part too. If you want to experience a deep narrative during 3 hours INMOST is definitely something to check out.

Overview
Inmost is a hauntingly beautiful puzzle platformer that doesn’t shy away from tragedy and pain. The game is split between 3 characters, a man, a little girl and a knight. Each section contains different challenges and seemingly separate stories that converge into one as you peel the layers of the game. While the game isn’t challenging, and more of a narrative game with some interactivity added, the story, atmosphere, graphics and animation make up for it. It’s absolutely one of the most emotionally touching game I played recently.
The Good
Great story that is vague at the beginning, but become clearer as you play. The payoff is great
Beautiful pixel art and animation
Excellent soundtrack and effects
tight level design
The Bad
While it isn’t bad by any means, the gameplay both puzzles and combat are pretty shallow.
Gameplay
As said before, the game is divided into 3 separate sections with different playable characters. Each characters have slightly different style of gameplay which I will elaborate below:
The Man
This is arguably the “main” section of the game in terms of gameplay length and level size. As the man, players explore a mysterious, run-down castle filled with ink-black monstrosities. He must evade them while navigating the labyrinthian structures by solving various puzzles. The castle is well-designed, similar to metroidvania style levels with looping paths, shortcuts and filled with secrets and collectibles. The man is lacking combat prowess, therefore he must use his agility and wit to outmaneuver the horrors in the castle.
As the main meat of the game, it’s still fun despite the gameplay that I find shallow. Most of the puzzles consist of finding items to use on other items and some platforming challenges. The best puzzles in the game are monster encounters where you must outwit enemies and kill or evade them using the environment and sparse tools available to you. There are collectible tokens called ‘pain’ that can be traded for exposition about the castle.
The Girl
Her section of the game is basically a scaled down version of The Man’s. She is less agile and instead of exploring a sprawling, mysterious castle, she explores a mundane, ordinary house. Instead of jumping around, fighting monsters, she crawls up a kitchen countertop by dragging chairs, boxes, and all manners of objects as makeshift platforms, finding a way to locked rooms through ventilation and all the fun kid adventures. This section is presented as a flashback when The Man reaches a certain point in the castles.
The Knight
Arguably the most linear, most vague part of the game, but still fun all the same. As with
The Girl’s Section, It is presented as a flashback upon certain points of The Man’s progression. Players take control of a sword-wielding knight hacking, slashing monstrosities you meet in the main part of the game. The gameplay with The Knight is basically linear hallways filled with enemies to kill and some light platforming puzzles.
This part is the only part with real combat in the game. You only have one button to attack, one button to dash or dodge and a hookshot that can only be used in certain situations. It’s not much of a gameplay that even the game auto-aim your slashes and dodge direction towards enemies. The combat is more of a mean of conveying what kind of character the knight is, in contrast to combat-less other 2 characters.
Performance and Technical Issues
Inmost Should run on anything. There is no problem at all with the performance. For bugs, I did discover a few minor bugs like clipping, and dialogue that doesn’t trigger properly and requires several tries talking to a character before it initiates. Otherwise, there are nothing major or game stopping bugs.
Story
Explaining anything at all beyond the trailer would spoil this fantastic story. I can say that it started vague and you’re purposely left clueless about what’s going on. As you go through the game, it laids itself bare before you up until the end, the ultimate payoff as everything is revealed. It’s also fun speculating, theorizing and figuring out the overarching story and the connections between the 3 characters you play. It’s fantastic, well written and presented masterfully with the game’s environment, dialogue, music coalesces into one emotionally heavy narrative.
Graphics and Visual
Inmost is presented in mostly monochrome simple pixel art but combined with the excellent lighting, particle effects and animation, the game evokes a greater detail than it really is. Each screen, character movement and actions are all pleasant to look at. The graphics in this game totally delivers the desolate atmosphere the game is trying to convey. Some cutscenes will just leave you stunned at how smooth a bunch of pixels can move on a screen.
Audio and Music
The soundtrack, sound effects and voice are nothing short of phenomenal. The songs are used sparingly, but when they play, they really hit the bullseye of reinforcing the intensity and emotion of the situation. Sound effects bring the world to life. The ambience, characters and NPC interacting with the world and everything else sound crisp and highly detailed. Playing it with a pair of decent headphones enhances the atmosphere even further. Lastly, voice acting is rare and appears in form of narration. It’s well-acted and you can hear real emotions behind the voice.
Conclusion
If you like story heavy games with beautiful art and atmosphere, Inmost is a must-play. It doesn’t really try anything new both gameplay wise and narrative wise, but both presentation and execution are nothing short of masterful.
Follow our curator page, OCG-Curations, if you like and want to see more reviews like this one.

INMOST. What a game. Interesting, puzzling, emotional, sad, and confusing. Do not buy this game if you’re looking for a difficult puzzle platformer that pushes you harder and continues to challenging you. INMOST is "video games as a storytelling medium". INMOST is "videogames as an artform". It is a chaotic story that propels you through it with emotional urgency. It is the story that keeps you playing, keeps you going. It was confusing at first but I found myself slowly piecing together all the details and unraveling the plot and how it all related to the three characters that you play. INMOST is an emotionally heavy and present game. It is full of pure, raw feels. It deals with topics such as suicide, love, loss, longing, heartbreak, abandonment, anger, rage, and regret.
Set aside the 4-6 hours it will take to complete this game, get comfortable, set the lighting right, turn your phone off, and enjoy the storyline, and make yourself feel the raw emotion that the game presents to you.
It is well worth it. You gotta’ feel it to heal it, and all that. 😉
Overall, this is a slow, story driven game and it’s not about action or hard puzzles. If you are looking for a fast paced platformer you will not find it in INMOST and you probably won't enjoy it or think the price is too high.
You might, however, cry. And like I said, you gotta’ feel it to heal it. Feeling raw emotion isn't weakness, in fact, it's weakness to not feel your emotions and let yourself be vulnerable. In life, there are good things that happen, and there are bad, and hard things that happen. To experience both, to get over your fears, to grow and change as a human being, that's what life is.
**If a loved one or friend hasn't reached out to you in a while, consider reaching out and seeing how they are. If you yourself are feeling down, or have thoughts of suicide please consider reaching out for help."
Here are a list of suicide crisis lines in your part of the world:

Lie down, try no to cry, CRY A LOT.
My God I was not expecting this... What a journey.
I love the music, the art, the story, it's just mesmerizing.
Mah hart, mah sole, I´m still processing it xD.
Highly recommend

INMOST it's short game and this game is talking about the pain of happiness it was very good story i liked it so much , i'm so happy when i just finish it was really great experience start from the pixel graphics until soundtrack .
.
after all i recommend this game ..

One of the most beautiful short story games I've ever played. This game is to depression and suicide and Celeste is to anxiety. The story is beautiful, the world is stunning, the music is memorable, et cetera. I really don't know what to say besides if you don't mind a relatively short game considering the price, INMOST is worth every penny.