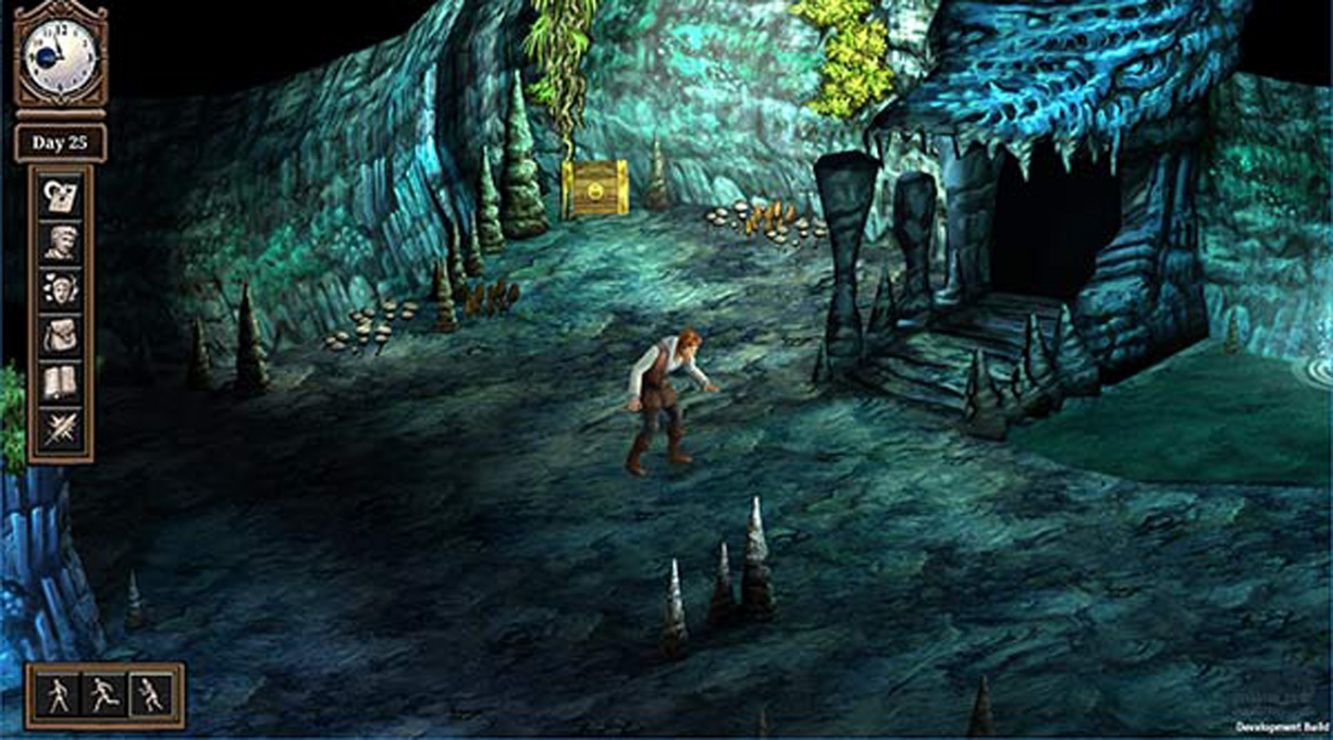 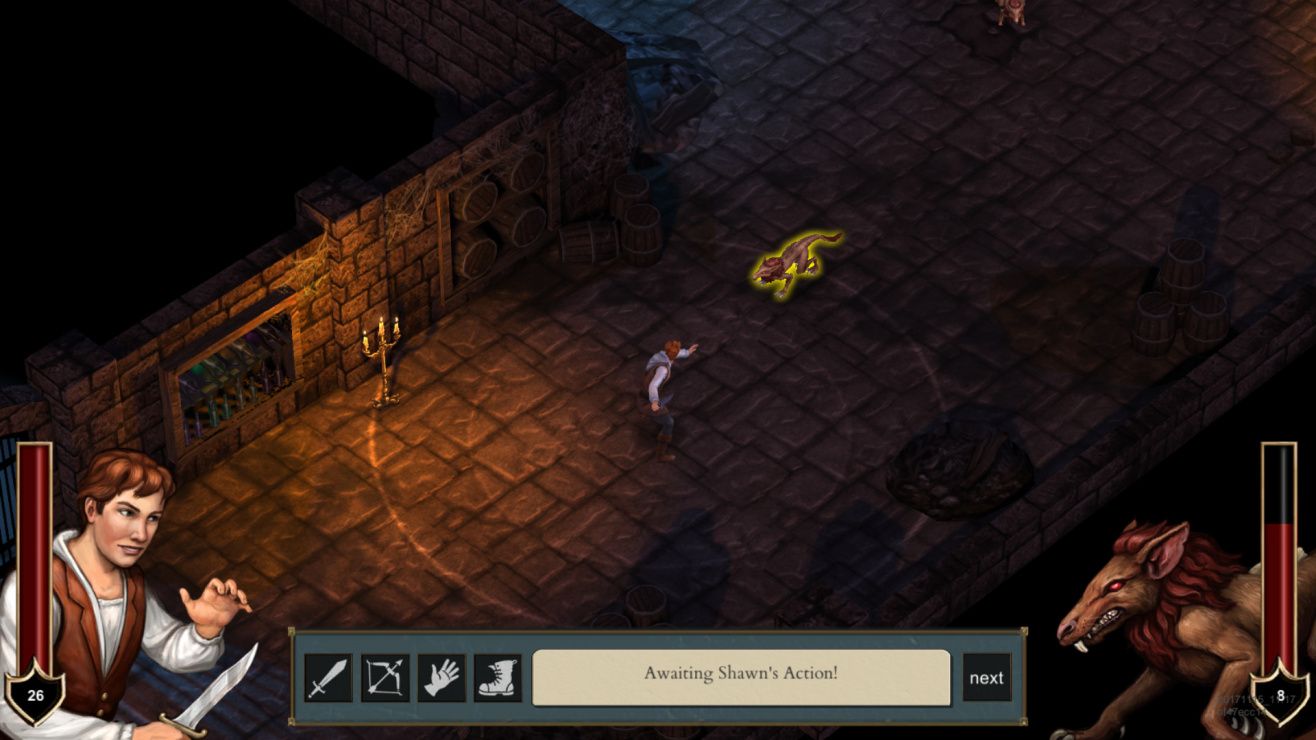 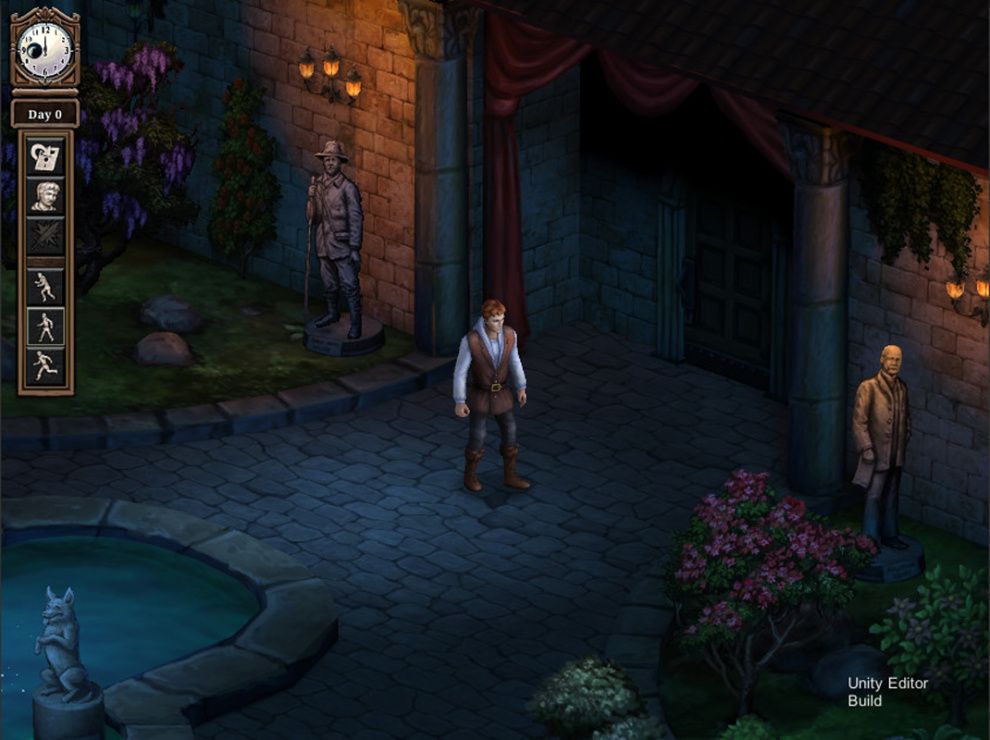 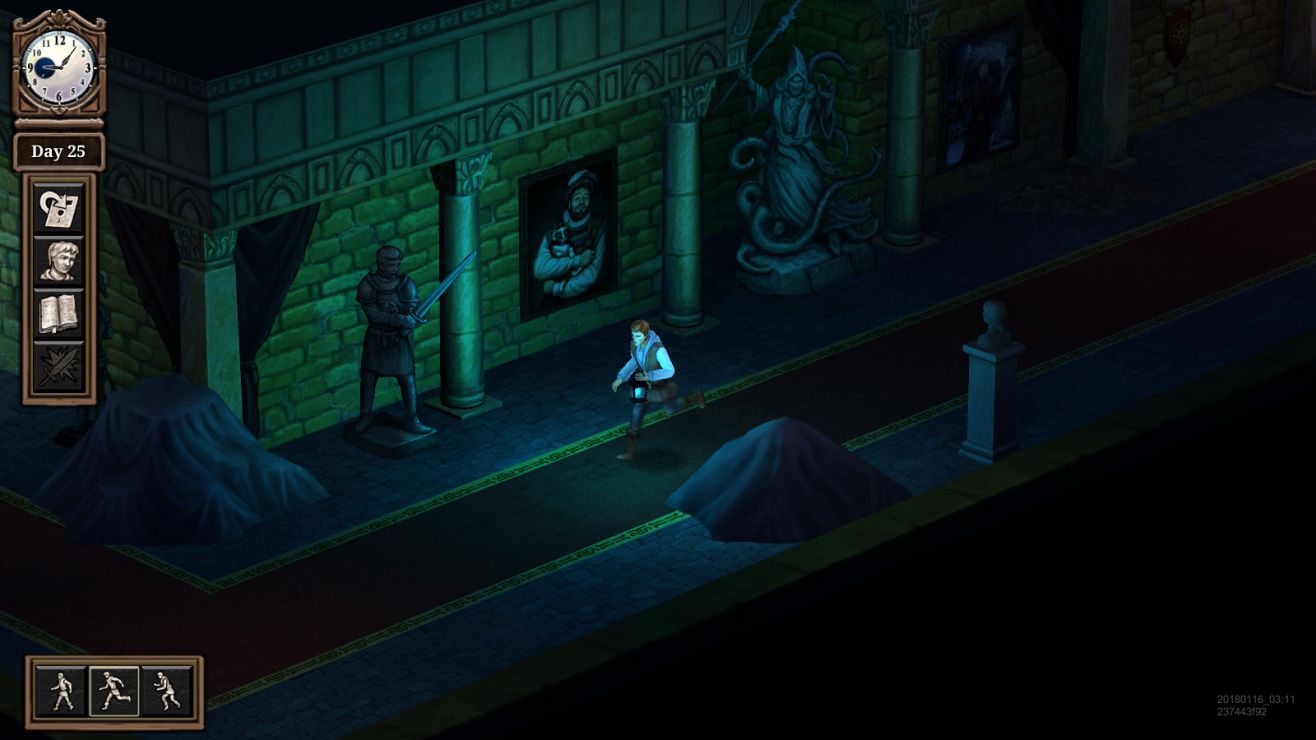 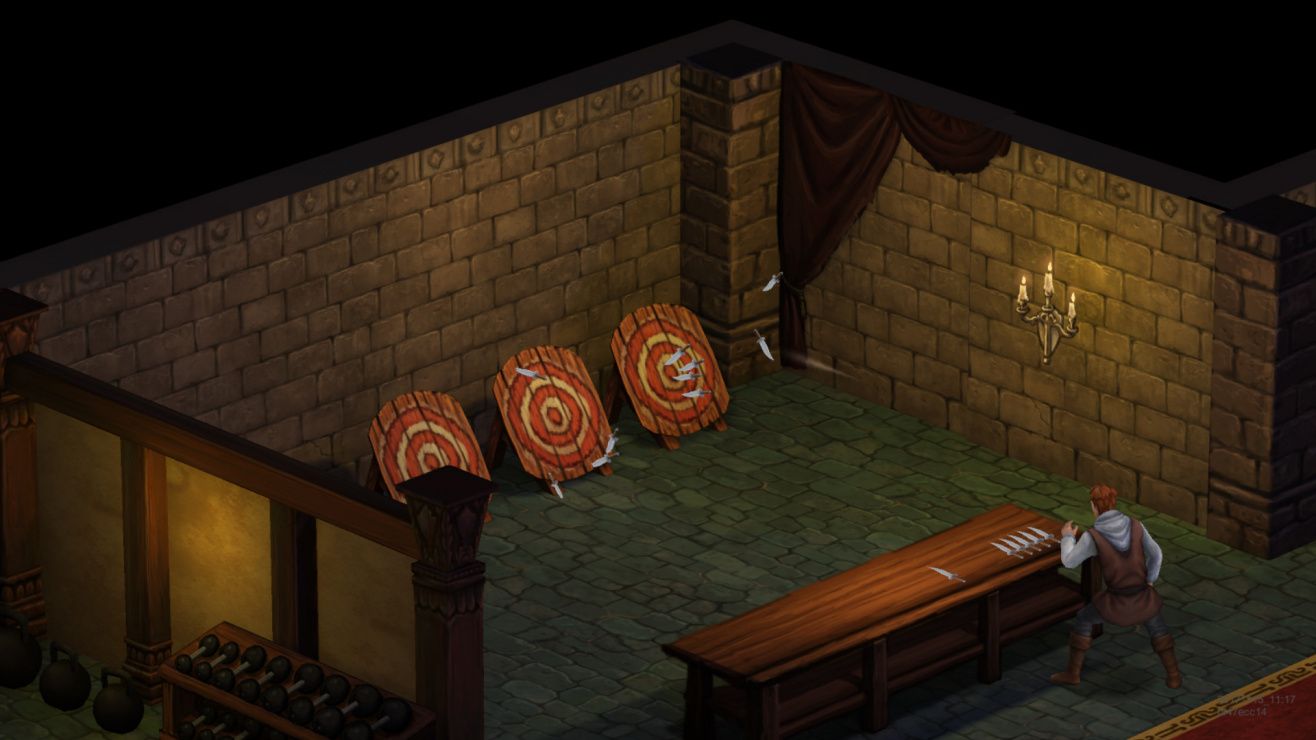 PC Steam adventure rpg story fantasy role-playing choices rogue
Hero-U: Rogue to Redemption is an epic - and humorous - fantasy adventure and role-playing game in which you take on the role of Shawn O'Conner, a young man striving to become a hero as well as a rogue. Hero-U: Rogue to Redemption is the work of Lori Ann Cole and Corey Cole, creators of Quest for Glory, Shannara, Castle of Dr. Brain, and Mixed-Up Fairy Tales. Although Hero-U is not a direct sequel to the Quest for Glory games, it features the same mix of adventure, role-playing, humor, and immersive storytelling that we introduced in that series. Shawn can become the Rogue of the Year while exploring a mysterious castle, making friends and enemies, fighting deadly foes, and uncovering the secrets of his own hidden past. Meanwhile players will enjoy the rich and humorous dialogue and descriptions as they guide Shawn through his adventures.
Share Share Share
Promote for 50G

Visit SaveOrQuit.com for detailed game reviews, posted daily!
‘Hero-U: Rogue to Redemption’ is a point-and-click adventure game with RPG elements, made by the creators of 'Quest for Glory' series. While trying to steal an item, our character Shawn gets caught and sent to the Hero University where young people learn to use their strengths and become heroes worthy to society. Shawn, being rather light on moral principles, is assigned to a Rogue class.
From then on, we play through each in-game day, go to the class in the morning, and after that do a variety of other things - we can build relations with our classmates and get to know them better, we can practice and improve our skills, we can go into dungeon areas to fight monsters and find loot, or we can do various quests that pop up. Over time we get to explore more of the university and learn a lot about the game's rich world and backstories of each character, as well as our own. On top of all this, there are plenty of jokes and humourous moments.
In addition to point-and-click mechanics and interactions with the environment, the game also has RPG elements such as skills that we can improve throughout the game and relationship-building with NPCs (this includes all relations, friendship and romance alike). Aside from this, there is also time management. The time does not tick down in a live manner. Rather each activity we do and each dialogue we have causes some in-game time to elapse. At specific times in a day, certain things happen, such as class, dinner, bedtime, etc.
In some of the dungeon areas we can end up engaging in combat with various creatures. The combat is turn-based and allows for some tactics to be used. It is also avoidable as our character can sneak past the enemies too with enough patience and stealth stat.
There are also many puzzles and mini-games to do, some of which are done during our exploration of dungeons, and other times when doing other activities.
Many of our choices and actions (or inactions) have consequences and can alter how some events happen and what happens to other characters.
Overall, a really fun hybrid of RPG and point-and-click adventure, with a really strong narrative and world-building, many fun gameplay mechanics that come together very well, and a nice level of presentation with a lot of beautiful art.
For a more in-depth review, please check here:

This is a decent game, although it's not quite what I expected. I had been expecting more puzzle and adventure game elements, but this game is definitely more of an RPG. You play as a young wannabe thief, Shawn. Shawn is caught during his very first break-in attempt and is enrolled by a mysterious benefactor to study as a Rogue at hero school. Rogues consider themselves to be far superior to thieves; rogues are charming and honorable and brave, and thieves are selfish cutthroats.
The game unfolds over 50 days. You are on a strict clock, but the clock is more turn-based than real-time. If you stand still and take no actions, time will not pass. Time only passes when you walk or interact with any object or person. Most days unfold using the exact same schedule. You have to be in class until 2, there is an elective at 3 that the game strongly suggests you take, you have to show up at the dining hall between 5 and 6 PM, curfew is at 10, and bedtime is around midnight. If you go to bed after midnight, you will suffer (minor) penalties on the following day. The game definitely railroads you onto this schedule, so if you try to pump iron in the gym instead of going to dinner, the game will warp you to the dining hall, and if you try to read a book in the library too close to curfew, Shawn will refuse to do it.
Time comes at a premium in Hero-U, so a lot of the game is figuring out how to cram in enough activities to raise your stats. You will spend most of your days following the same basic routine: Class, gym, elective, dinner, rec room, sneaking about a bit, bed, repeat. It is very fun to see the stats increase at first, but by the end of the game I had most things maxed out and I did not notice very much difference in the gameplay.
There is also a social aspect in the game. Shawn can chat with and make friends with a number of teachers and staff, his roommate, and his classmates. The characters are all a bit flat, and friendships don't have too much of a gameplay benefit, but nonetheless I found this aspect of the game to be welcome. There's even a bit of a romance aspect tacked on with both men and women to flirt with, which is quite minimal but also a nice touch.
Most of the aspects of Hero-U could be best described as "adequate, if not stellar". The combat works and gets the job done. The abundance of time-gated content is a bit frustrating, but understandable. The character progression, world-building, and overall story is decent.
There is one place where Hero-U really shines, though, and that is the attention to detail with with the environment and the general writing with the flavor text. Every picture, every suit of armor, every random pot and bush and tree has multiple interaction options. These serve zero gameplay purpose, but the writing that went into these things is enjoyable and warm and funny. There's a staggering amount of well-written flavor text hidden away in this game which has no function other than to reward exploration. These delightful puns and other tidbits are funny, cheerful, and somehow nostalgic.
There's a lot here to make me optimistic about Summer Daze, and I will be picking it up as soon as it is available.

Reminiscence of the old days Quest for Glory series. Though the turn based combat and the one icon interaction needs to get use to.