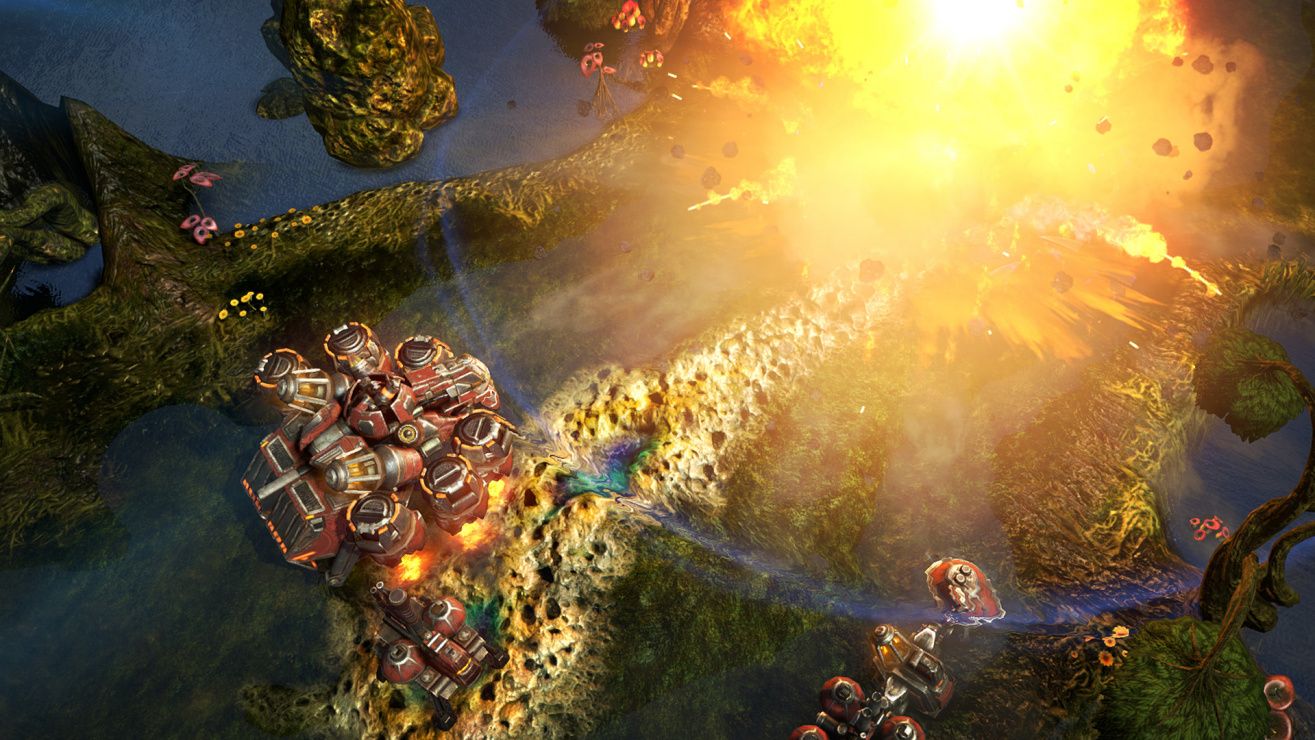 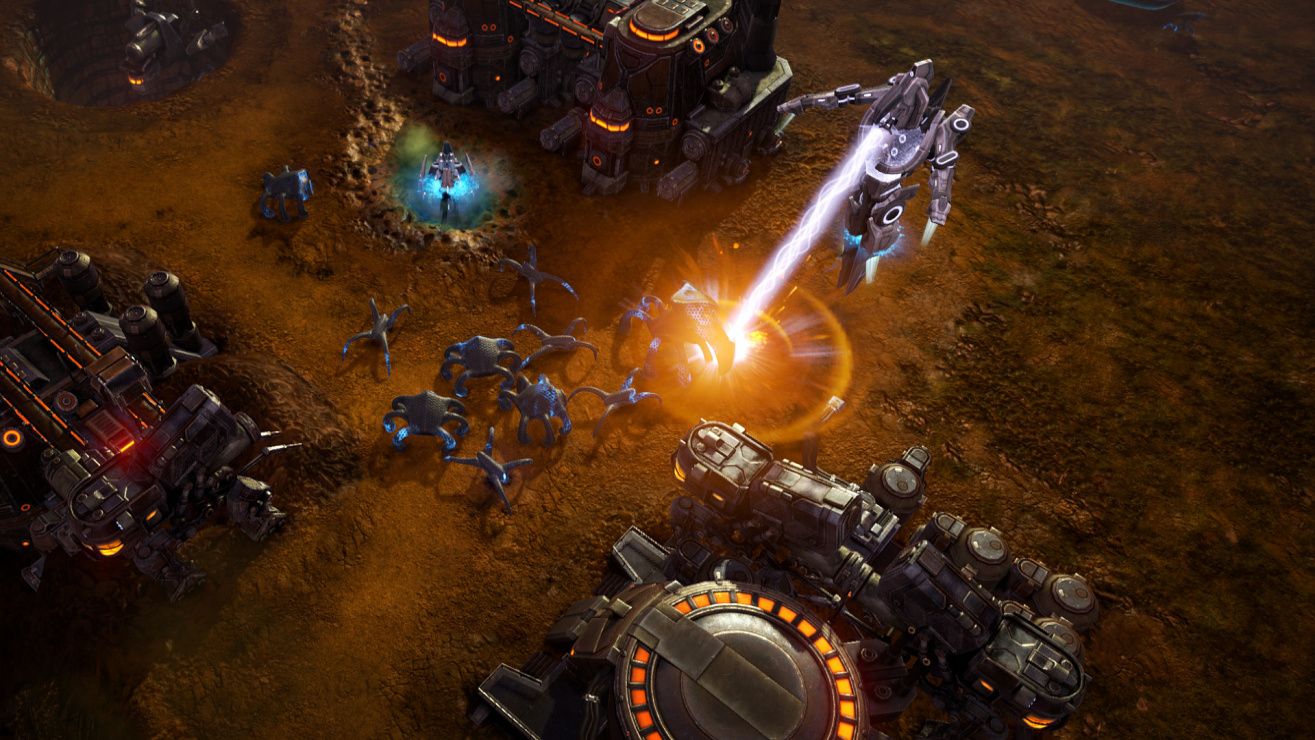 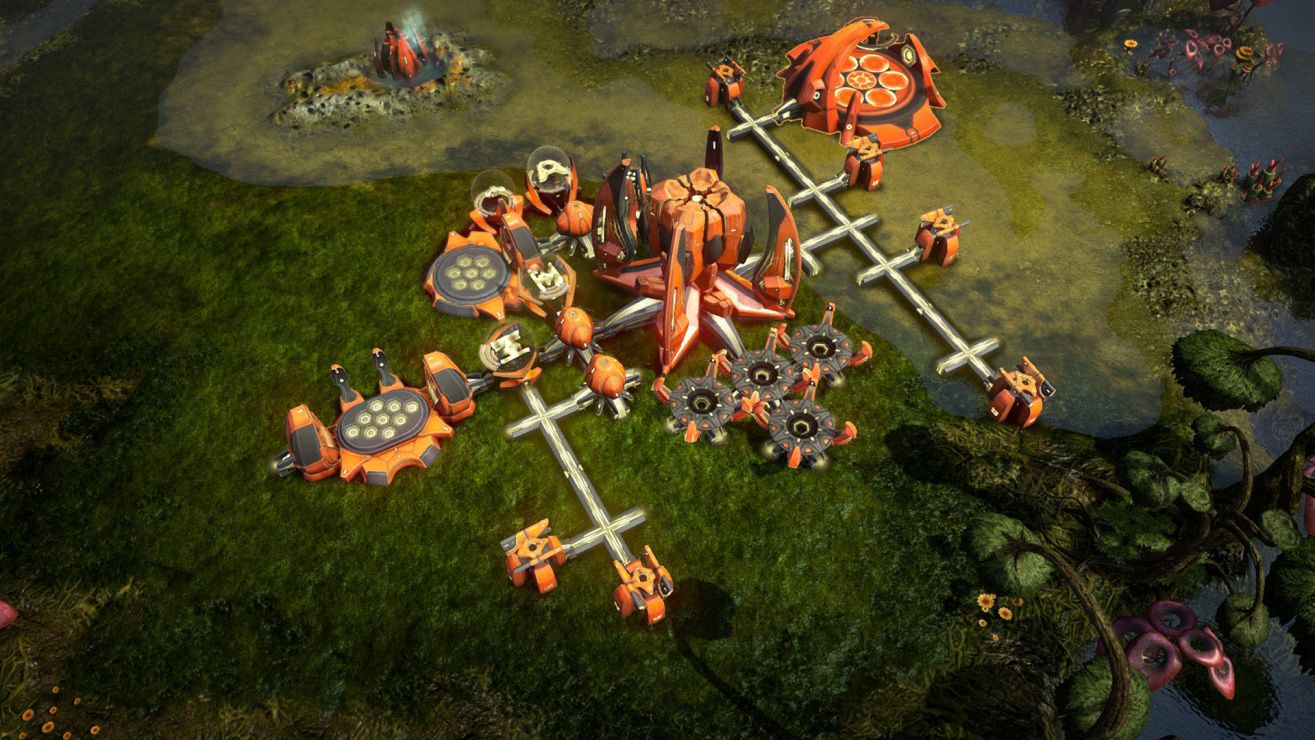 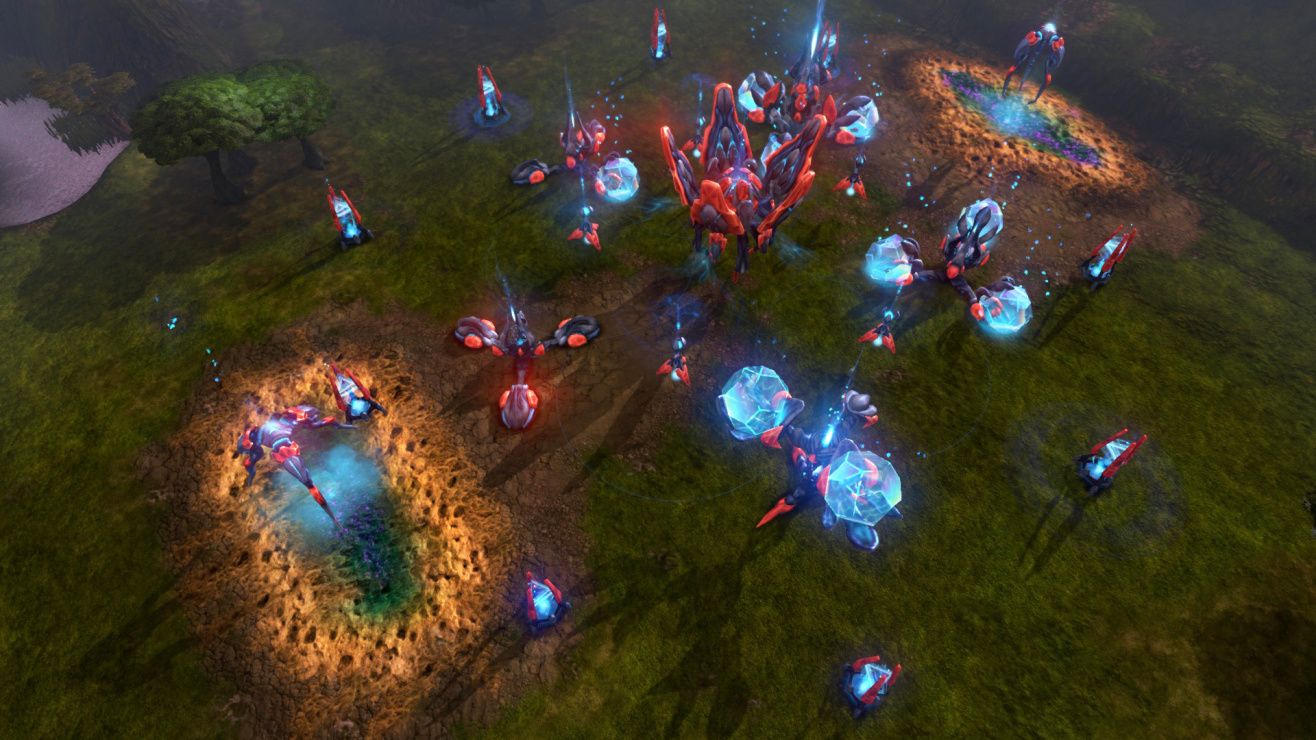 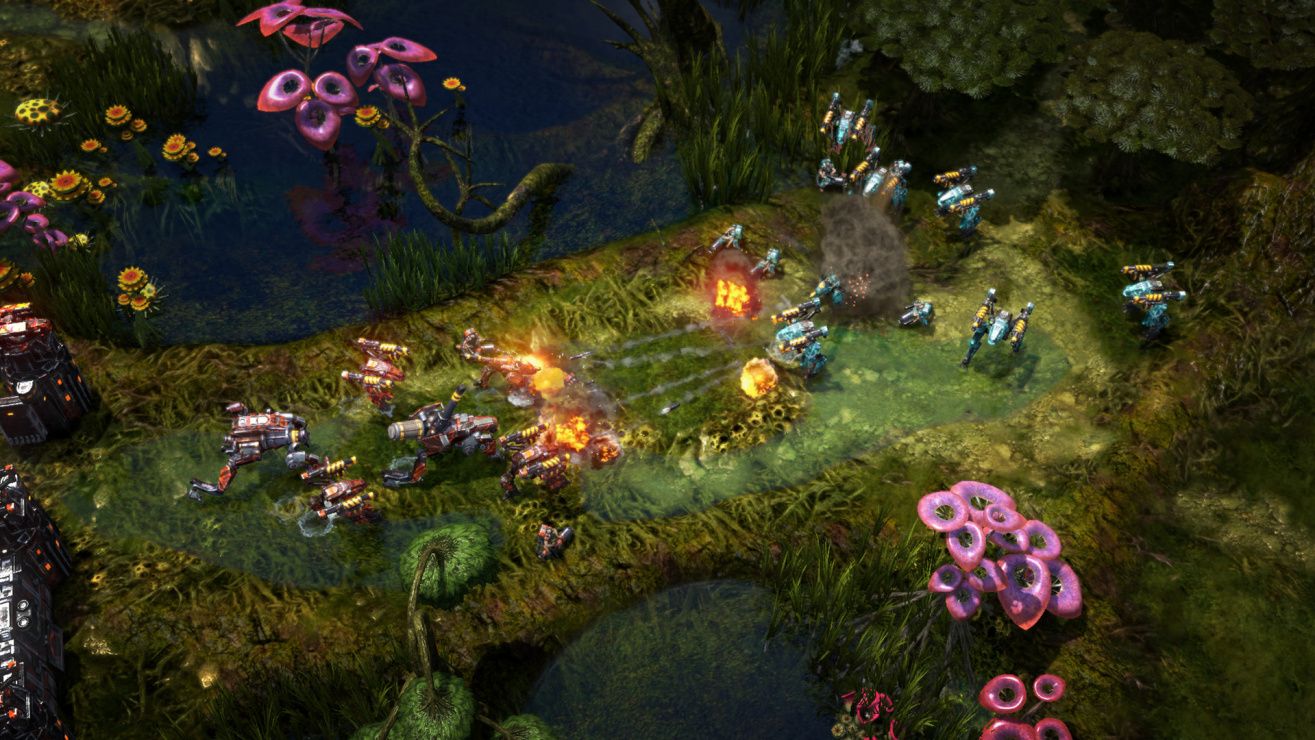 action aliens robots rts sci-fi space strategy
Out of the ashes of war, a tentative truce emerges between the Humans, Beta and the Goo—but peace doesn’t last long. Ecosystem Nine finds itself thrust into turmoil once again with the arrival of a destructive, alien life form known as the Shroud. Grey Goo is a real-time strategy (RTS) game that combines classic strategy mechanics and a balanced combat system with an emphasis on large-scale decision-making. It puts you at the center of a tactical struggle for survival—and ultimately, control of Ecosystem 9. Take on the single-player campaign to command three factions: the Humans, masters of defensive architecture; the Beta, a proud, versatile alien race; and the Goo, an enigmatic, highly mobile life form. Or compete with any of the four multiplayer factions—including the disruptive, unpredictable Shroud.
Share Share Share
Promote for 50G

A solid game with an emphasis on macro-level decisions similar to the older Command & Conquer games, but fans of micro-intensive games like Blizzard's RTS games may not enjoy it as much.
PRO
+ Well designed, good interface, balance feels okay
+ Factions are unique and fun
+ High production values
+ Interesting story
CON
- Fans of micro-intensive games won't like the lack of active abilities
- Other people are saying it's hard to find multiplayer games with strangers
- Most unit types are forgettable compared to Command & Conquer or Dawn of War
Grey Goo knows exactly what it wants to be, and it does it very well. The factions are distinct and fun to play, and tend to be very mobile and able to build almost anywhere (except the Humans). The story is a focused, small scale introduction to a larger universe, and the production quality is AAA. High quality cutscenes, interesting campaign story.
But Grey Goo does not have a lot of micro-management (except for manual repair of structures) and unit abilities are passive or automatically activate when a certain condition is met. To play well you need to decide how to group units, where to send them, what will be in each group, and managing their positioning in combat (the original C&C style definition of micro-management). You have to get your economy off to a good start and manage the expansion of your forces while denying your opponent(s) access to more resources. There's no active abilities to click through and the "tech tree" is actually an upgrade system where you pick a mutator to improve your army in one of the five key areas (tank, artillery, stealth, air, economy). If you love Warcraft 3 or Dawn of War 2's in-depth control of small numbers of units you probably won't like GG as much as someone who preferred Tiberian Sun or Red Alert 2.
GG is also quite dry and very tightly focused. Most of the units are solid and well thought out from a gameplay standpoint but don't expect to be quoting their voice clips like you would with Dawn of War or Command & Conquer.
Multiplayer maps are either two player or four player and are mostly set in a lush jungle which makes a lot of games look quite samey (there are some ice and desert maps). The multiplayer maps are very tightly balanced and I think a lot of thought has been put into making sure they're all useful for competitive play. This means you won't find any gimmick maps, maps of real-life locations or maps that can support big games or hilariously unbalanced team-ups. I found this disappointing as I used to enjoy setting up weird games in C&C Generals and Dawn of War 1, but I'm probably in the minority here.
I run multiplayer games with friends and Grey Goo has become our go-to game when we're together. As a fan of older RTS games like Command & Conquer, Red Alert 2, and Dawn of War, I really enjoy Grey Goo.

A flawed gem but an enjoyable one. All of the factions are fun but the goo really steal the show for me the campaign is alot of fun aswell which is great as i couldnt care less about multiplayer. Nicely done devs.

Graphics are good. There is kinda a new take on the rts deal that I like.

I saw someone on Discord put it perfectly: You have to play Grey Goo for more than 10 hours to realize it's actually very good. Until then, you think it's shit.
I bought Grey Goo on day one back when it came out, and my first impressions weren't amazing. Then the Shroud update came, and I actually enjoyed the new faction a lot, but not enough to keep playing. Fast forward to now, when I was browsing through my Steam library looking for an RTS to play and decided to reinstall Grey Goo. And...I dunno man, something clicked this time. Maybe it was trying the new units that changed up the similarities between the Humans and Beta. Maybe it was really digging into the Shroud and realizing what a really fucking cool faction it was. Maybe it was returning to the simple pleasure of launching death missiles with the Hand of Ruk, or massing Howlers and watching their upgraded electrical attack shred through enemies, or drowning a ton of massed infantry in endless Goo.
Grey Goo is a legitimately good game, and I can't recommend it enough. The campaign is alright, but multiplayer and skirmish are great fun. Don't mistake the lack of unit abilities or relatively small upgrade tree for simplicity: there is nothing extra in Grey Goo, and you'll constantly find new unit configurations that surprise you. It might not scratch the itch for those of you looking to get your APM to sky-high levels, but as a slower, more laid-back RTS it's a ton of fun.
Plus, a killer score from Frank Klepacki.

A Glorious Return To Classic RTS // Recommended for all fans of strategy & RTS gaming
+ UI is actually extremely user-friendly
+ Voice-acting & character animations are absolutely fantastic
+ Overall visual presentation looks great
+ Cinematics help pull everything together & move the narrative along
+ Faction designs feel unique & interesting relative to one another
+ Goo faction plays very unconventionally & is a breath of fresh air for an RTS title
+ Map editor is available in-game
+ Soundtrack is both quite good & also is customizable
+ The plot is very well-imagined, particularly for an RTS title
+ The fourth (Shroud) faction is playable in skirmish mode without requiring DLC purchase, although DLC will be needed to play through their campaign
- Human conduits cannot cross ramps or terrain, making for a serious late-game restriction
- Building requirement icons can be annoying to discern (especially when trying to remember upgrade or building requirements) & are not labeled in some cases
- Beta faction feels disproportionately OP in that they are the most versatile, though this may be a subjective observation
- The Goo faction can be disproportionately frustrating & difficult to wholly defeat
- Stock list of maps is quite small & games only support up to 4 players
LockeProposal's Big Day Out
Community Group
Curator Page

This game is kinda similar to star craft. It has different unique races. It's fun to build up and take down your enemies. It's also fun to play with friends. There is a range of different troops, so it's a good thing to mix up your units to be more efficent .