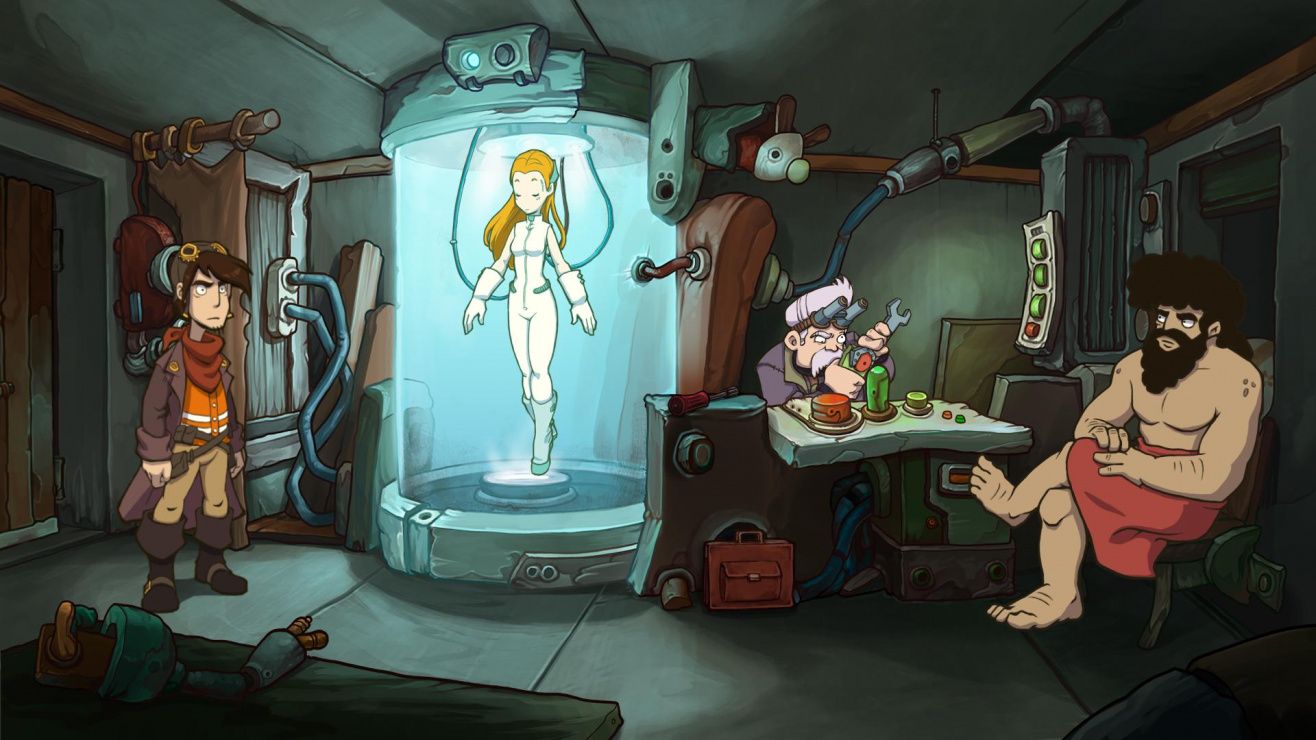 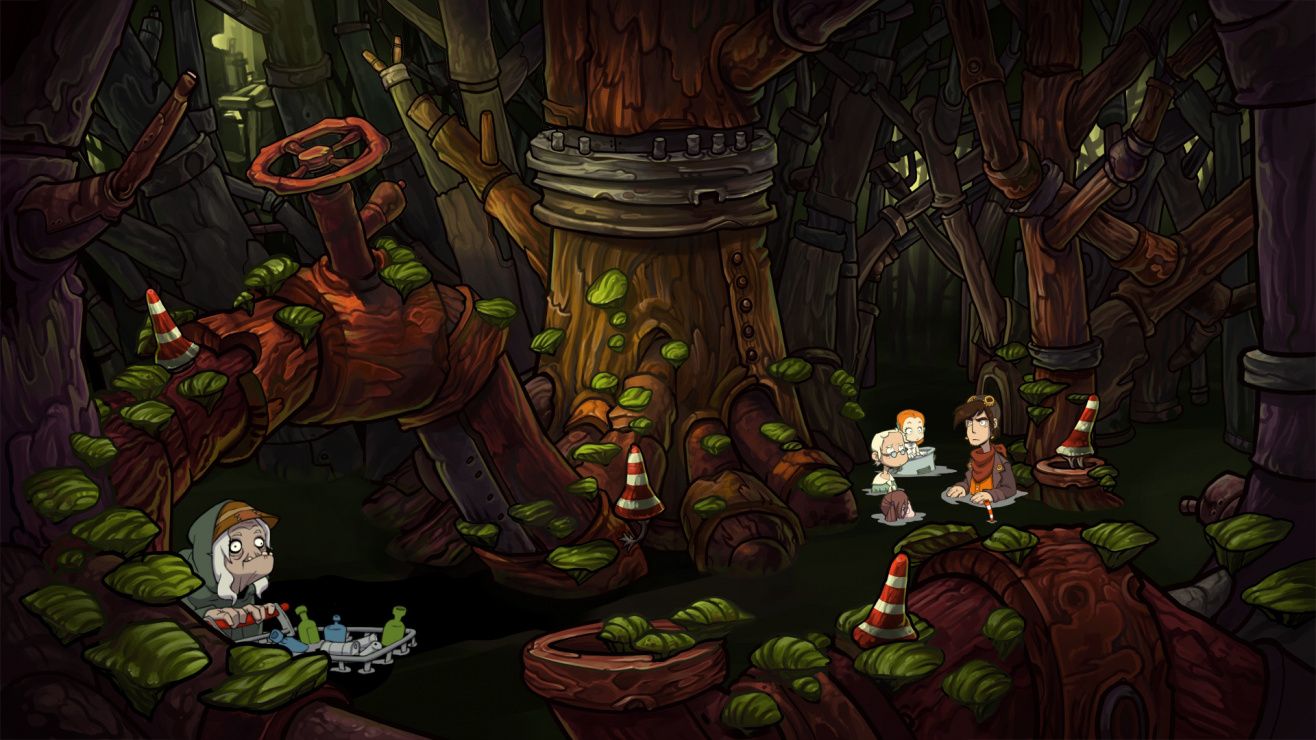 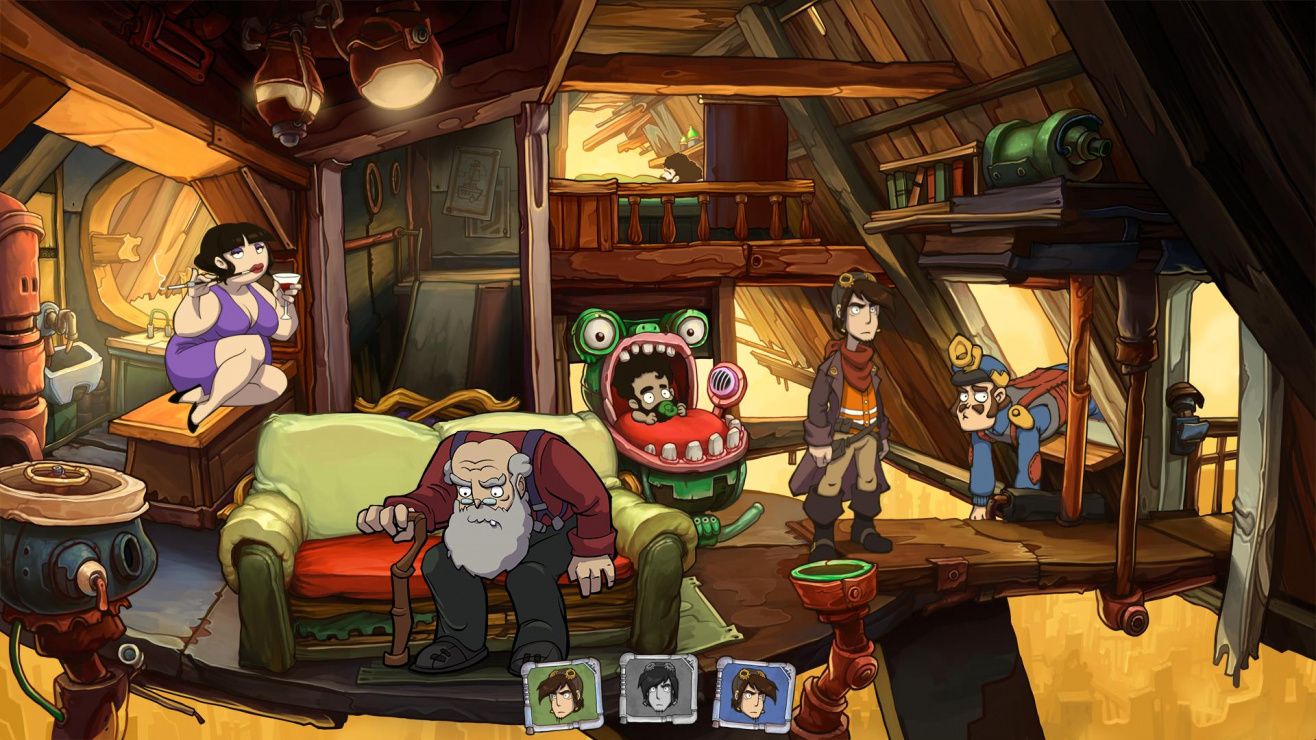 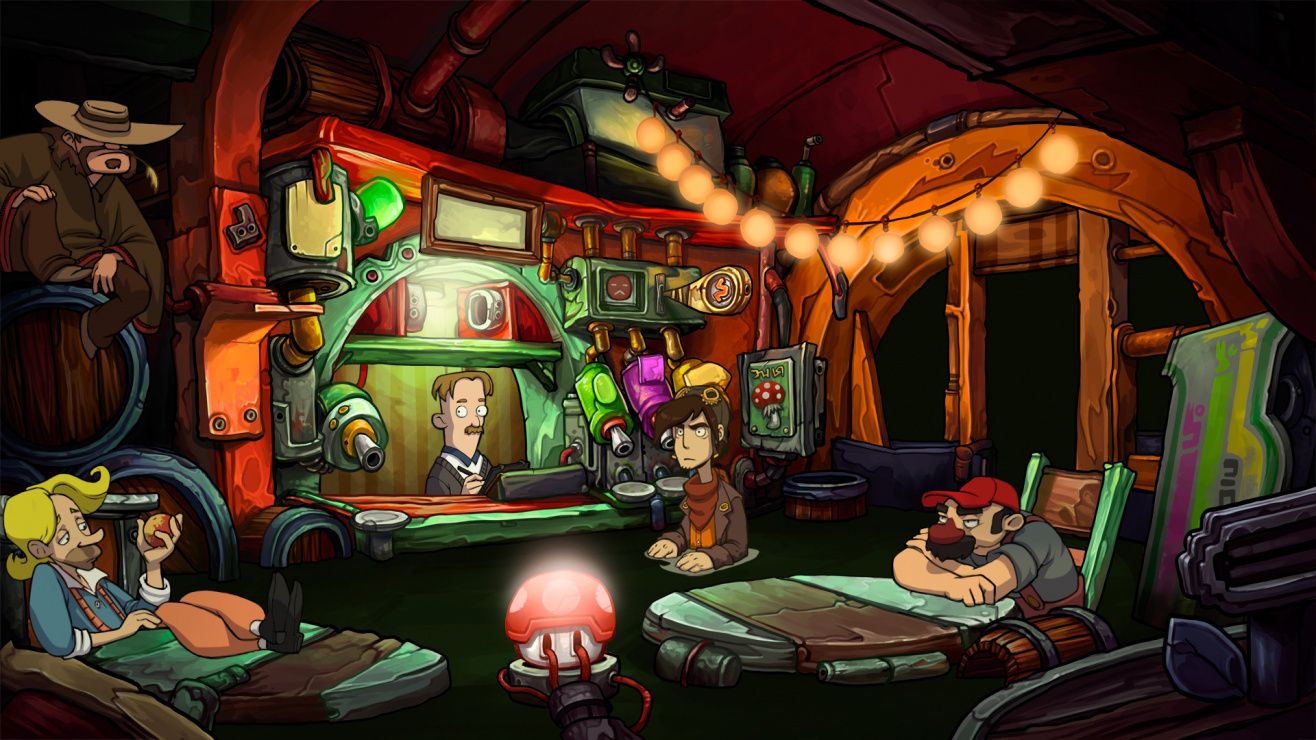 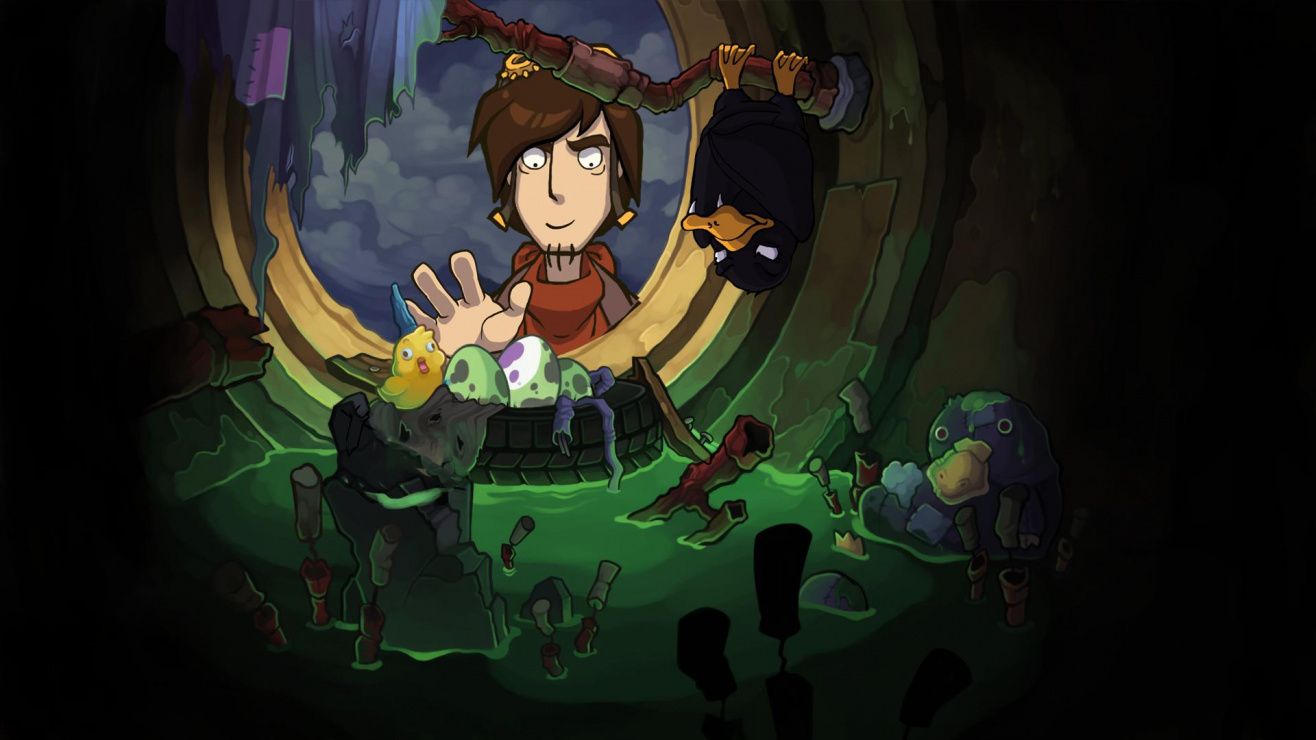 PC Steam Console Playstation Xbox indie adventure singleplayer puzzle 2d funny comedy retro
More chaos, more destruction, more Rufus. Not one, not two, but three Rufuses cause all kinds of crazy mayhem in the long-awaited adventure comedy Goodbye Deponia - part three of the Deponia series. The Organon plans the destruction of Deponia, the lovely Goal has (once again) disappeared, and anti-hero Rufus just can't seem to stop getting in his own way. All he wanted to do was to get off the junkyard planet of Deponia and move to Elysium, the paradise orbiting Deponia as a spaceship reserved for the highest echelons of society. Finally, Rufus has come up with a seemingly perfect plan... The award-winning Deponia series comprises four wacky tales of adventure from the junkyard planet Deponia. These classic point & click romps not only delight comedy fans and adventure veterans, but also newcomers to the genre.
Share Share Share
Promote for 50G

Setting
The sublime ending of the trilogy, in which we learn if and how our heroes reach is Elysium. Along the way we meet most of the characters we have come to know (except Wenzel).
After Chaos on Deponia we continue on Organon Cruiser Route, where lies Hotel Menetekel. A very weird place for a hotel, but that's part of their business strategy. Here a plan is forged to join the very last cruiser, heading for the very last highboat out of Deponia! Somewhere along the way we learn the origins of Rufus, and of a part of Deponia itself! How will our beloved hero reach the end of this story? What will he blow up along the way? If you have played the previous games, gogo find out!
My 2 Zlottiecents...
It feels to me the devteam got really in the flow of these games! It's likely they received feedback from the first game, and took it to heart. This game is a lot more linear than the previous games, which both had a big area at their second chapter, and that takes much mental speed out of the game. So this game has a better pace. A lot of things have to be told and tied up, which is done perfectly.
So, is this game easier? Yes and no. To compensate, a little bit of moon logic is thrown in, like putting salt in a dumpster to make the inhabitant, a pelican, so thirsty that he abandons his fish in order to drink . The overarching game achievement is greatly easier than the previous games, this time the required items are well visible.
In my review of the first game I mentioned that Rufus isn't a very nice guy, and every negative review states that as a problem. When I was playing this game, I realised something: I love Rufus! He has grown on me along the way! He is still the biggest jackass ever, but yeah... <3
note: I played this on 'Deponia: the complete journey'

Goodbye Deponia is the third game in the Deponia series. Rufus and friends are still trying to save Deponia and avert the plans of the Organon. There's a sense of impending doom hanging over Deponia as the date of destruction approaches, but Rufus is confident that he can save Deponia before time runs out.
The gameplay in this one is in the same vein as those of the other games: mostly puzzles. I felt like the difficulty of these puzzles was pretty similar to those of the other games. None of the puzzles were as bad as some of the ones in Chaos on Deponia, but not all of them were straightforward either.
Story-wise, I thought this was a good conclusion to the main Deponia trilogy. This gave a lot of backstory to Rufus and a number of the other characters, and the plot was a little more dynamic than in some of the other games. There was more going on, with more locations and more stakes than in the previous games. This game gave a good expansion to the world, history, and characters in the Deponia series. This game continued to have the same style of humor as the previous games, and was just as enjoyable as the previous ones, or perhaps more so. However, the dark humor of the previous games was even more dark here, and there were more moments that didn't sit very well with me, although it didn't tarnish much of my enjoyment overall.
Rufus's character is almost more contradictory in this game than in the others. He's just as much of a self-centered jerk as in the previous games, and, whether from complete lack of compassion or just buffoonish ignorance, he continues to hurt the people around him, even his friends and the people he cares about. However, there are also some heartfelt moments in this game, with Rufus being kind or regretting his mistakes, and the people in his life telling him what they appreciate about him. Some of this comes down to character development, but in some ways Rufus seems to be an even bigger jerk in this game than he was in the previous two. I think the character development he does get and the moments he has by the end of the game are good, but it would have been nicer if the change was more consistent and the moments were more earned.
Overall, Goodbye Deponia is a pretty enjoyable adventure game and a good conclusion to the main Deponia trilogy. It's on par with the previous ones in the series, so if you like those you'll probably like this one as well. The conclusion left a little to be desired, which makes me especially glad they ended up making another sequel afterward. 7/10

In my ongoing and likely futile effort to write a Steam review for every game in my library (#288 out of 612)... it's time for Goodbye Deponia.
Goodbye Deponia is for fans of point-and-click adventure game fans who adore the genre, don't think there are any major flaws with the usual formula, and have spent several decades wondering why, exactly, the genre lost its popularity in the mid-1990s.
I'm being snarky. I apologize. What I mean to say is simply this: Goodbye Deponia is an old-school point-and-click adventure games that embraces both the best and worst aspects of the genre. The story takes you from one imaginative locale to another, and drenches every NPC interaction with so much attempted humor that the narrative lacks any semblance of emotional depth or compelling stakes. It's like a saturday morning cartoon where every time you think you might be absorbed in the action, everything grinds to a halt as the mascot character turns to the camera, cracks a smile, and delivers a profoundly lame joke with incredible confidence. That's Deponia, in a nutshell.
So if you're a fan of the genre know what to expect: lots and lots of puzzles, backtracking, and snarky hit-or-miss humor. Personally I found much of the writing to be embarrassing to listen to--but it is fully voice acted, and the voice acting is pretty solid, which I suppose has to count in Deponia's favor. Many of the puzzles also seemed (surprisingly) intuitive, and while I can't exactly say I never had to consult a guide to progress, I didn't have to keep one constantly handy, which is a pleasant departure from the usual method of play for these games.
All-in-all this is a very tepid endorsement. The Deponia games are serviceable adventure games with very solid production values and puzzle design, but with very spotty writing. They're not for everyone, but if you managed to even find this review, I suppose there's a very good chance that they might be for you.

Good game but I hate the ending

Goodbye Deponia is the third in the Deponia series. First being Deponia and second being Chaos in Deponia. Played using a mouse and the space bar, took me 14 hours to beat give or take (left the game on a lot, got stuck badly twice). Difficulty is moderate. It's also the longest Deponia I've played so far.
This game has more Deponisms, a LOT more of the hateably loveable Rufus, and many returning characters from the first two games. Once again Deponia is at stake, and it's up to Rufus - using whatever he picks up off the ground a few puzzles in between - to save the day!
If you liked the first two, you'll definitely like this one.
Special note - Like the previous games, the dark humor in Deponia is crude and probably not suitable for kids younger than age 13. This Deponia is especially bad. So yeah, not a game for kids. Definitely a hilarious game for the nihilistic among us.