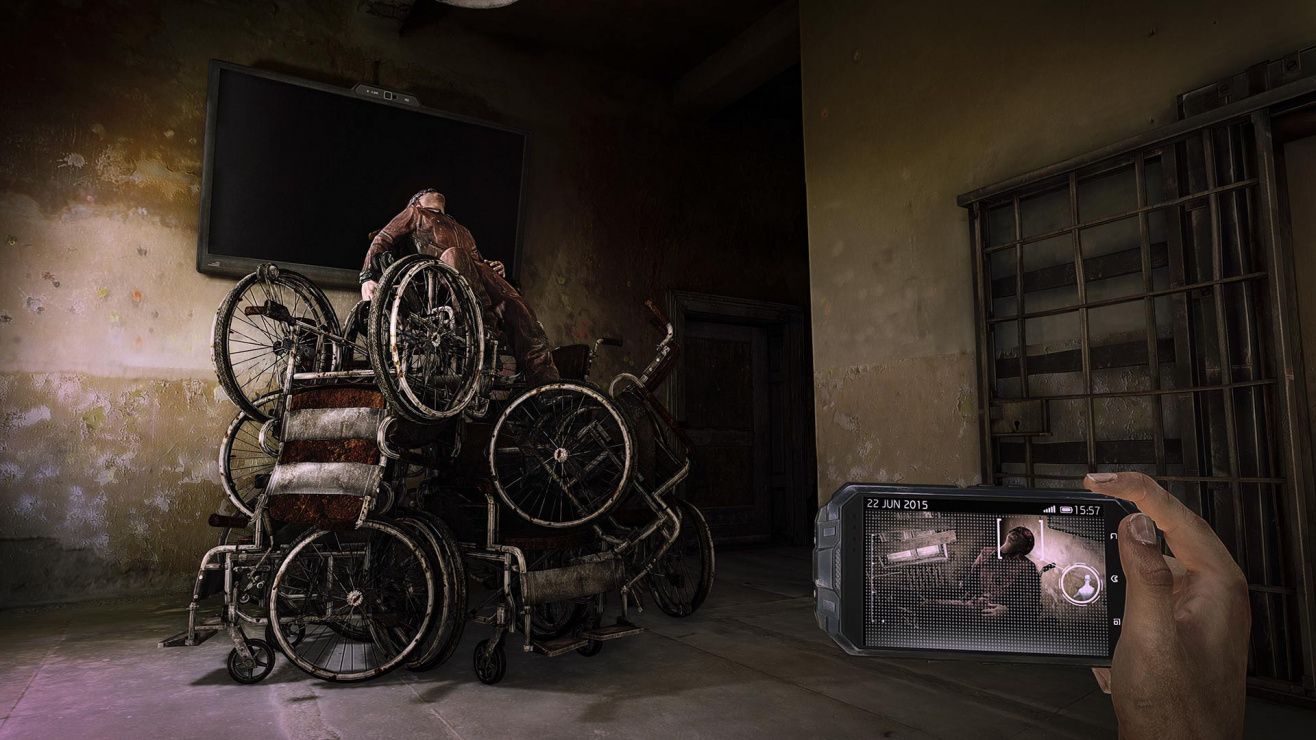 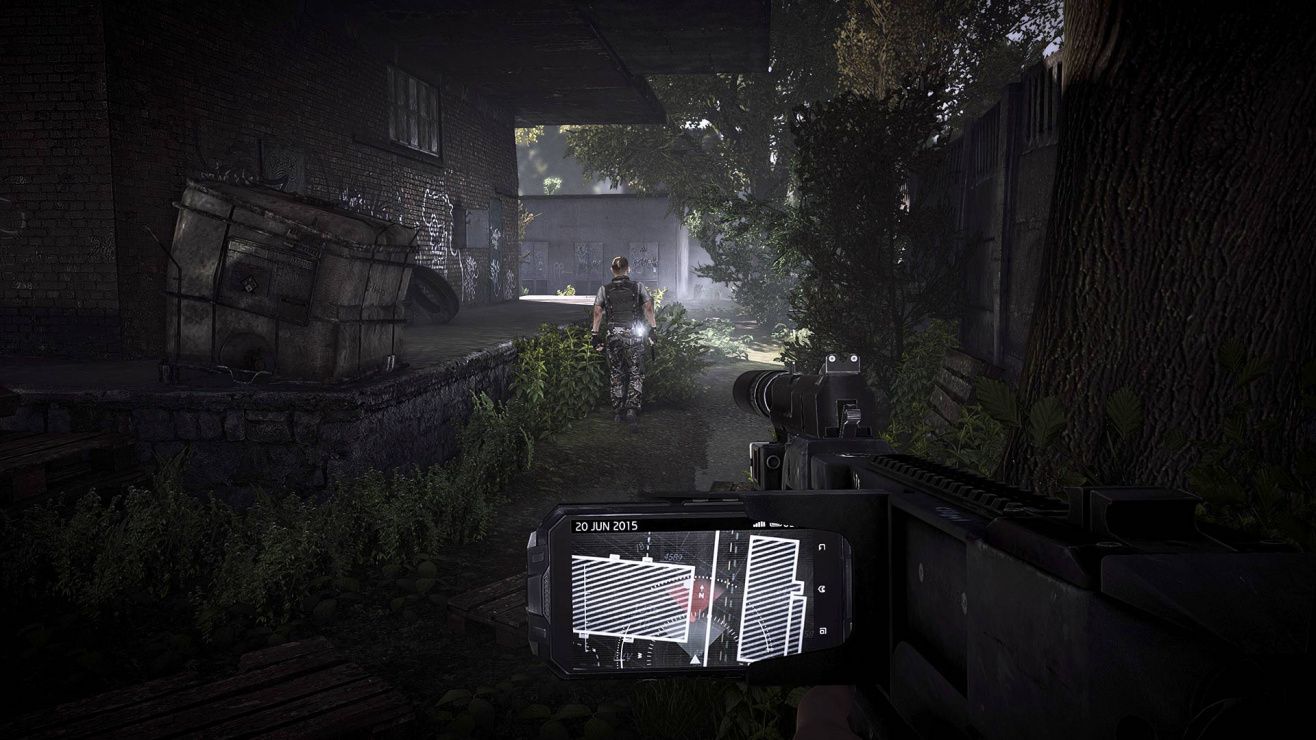 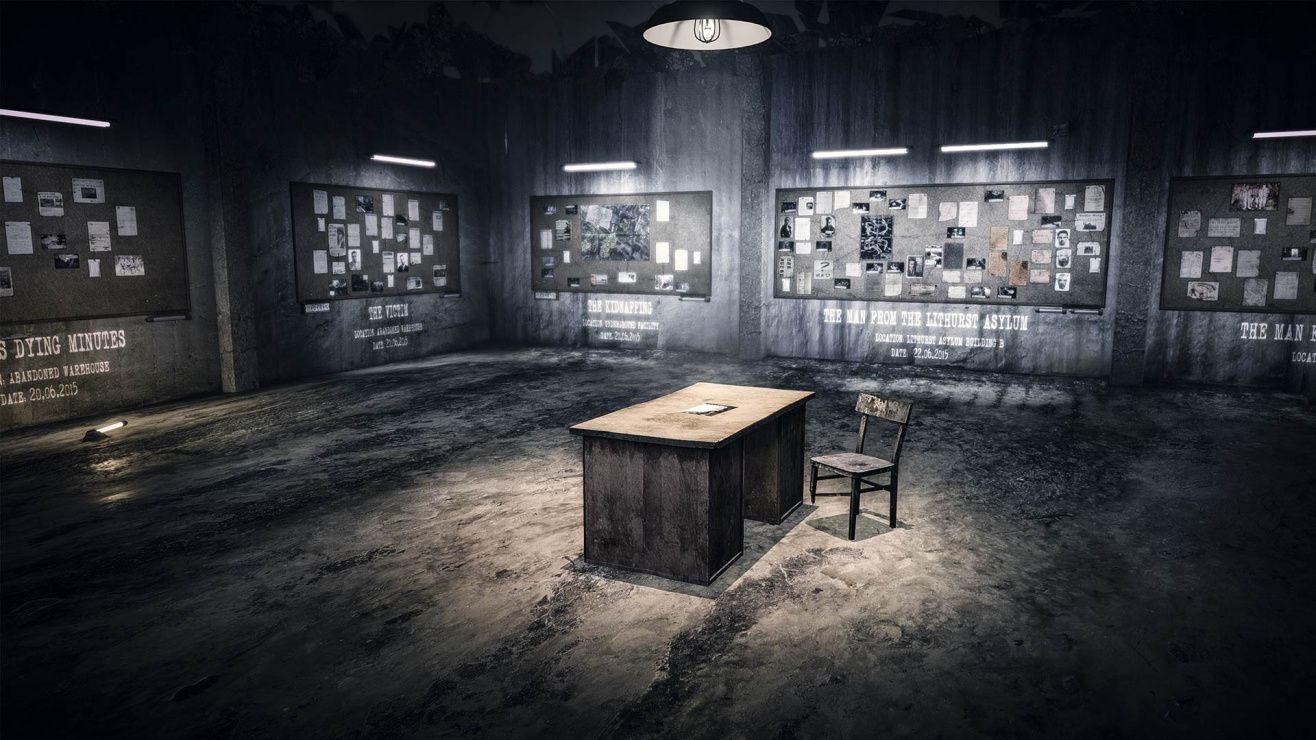 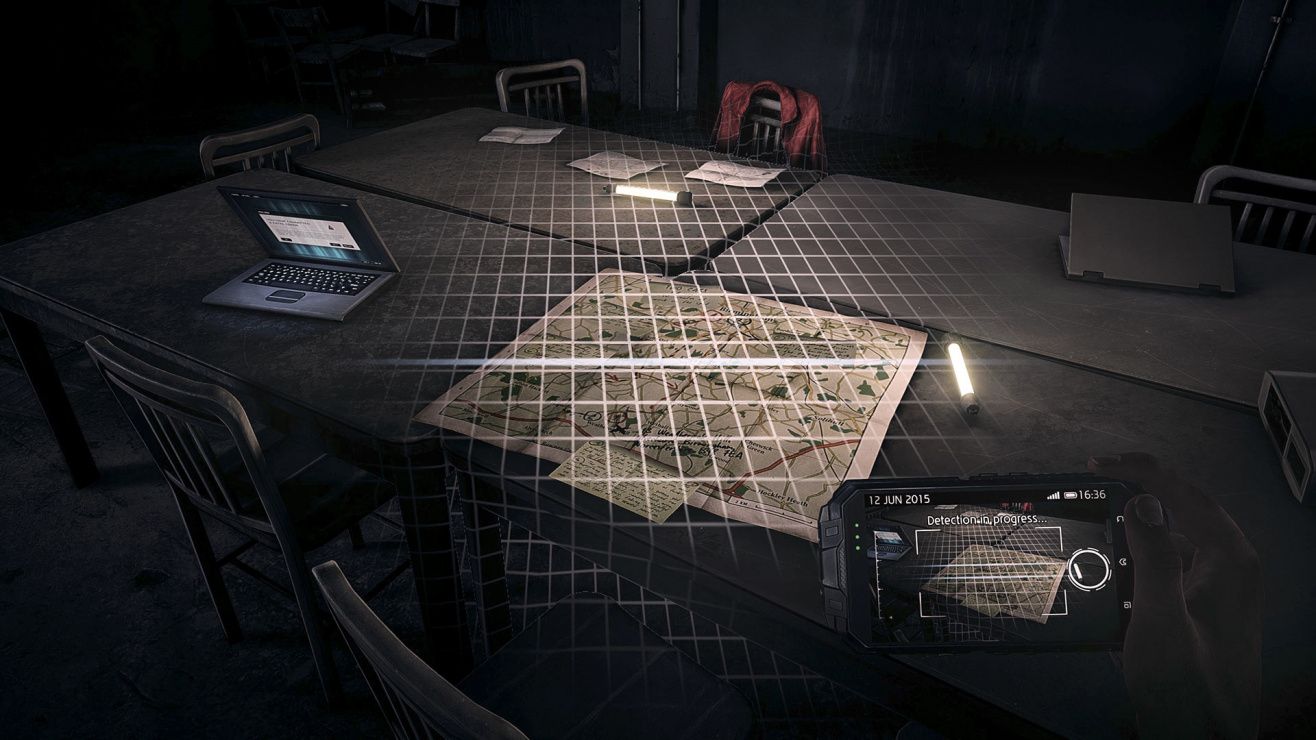 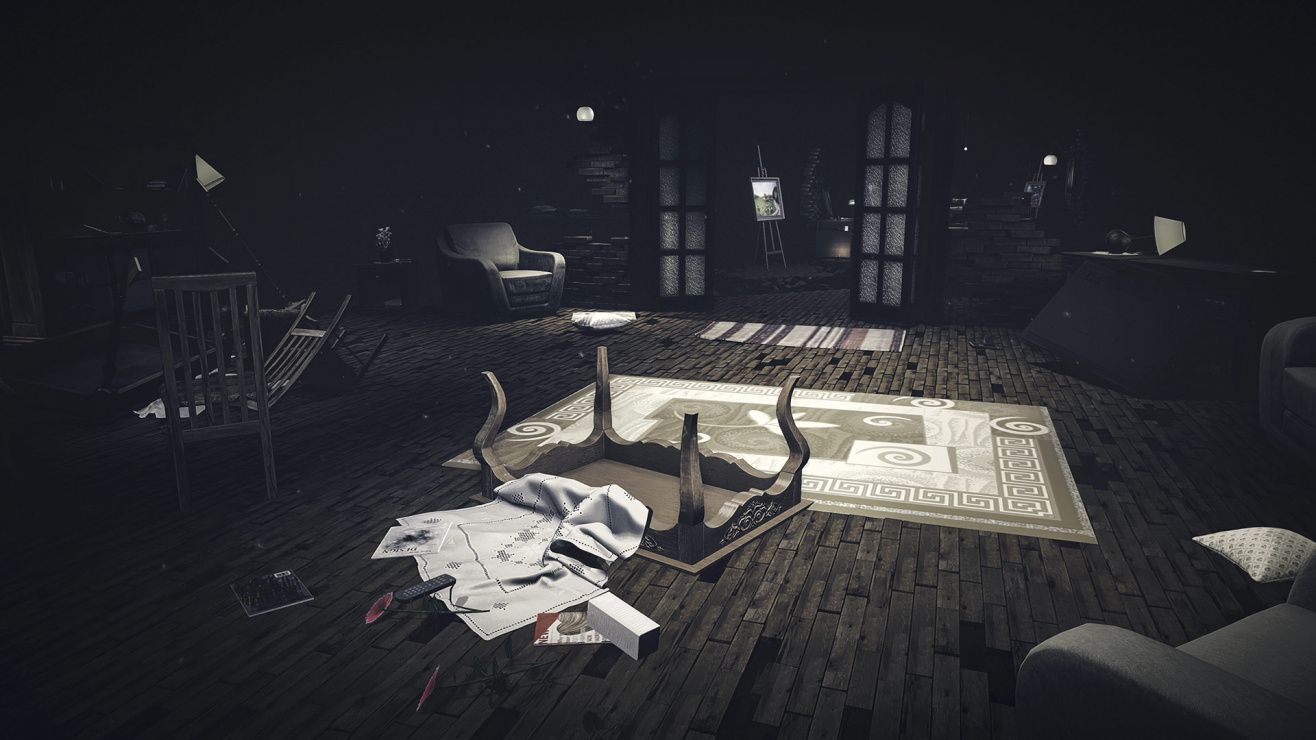 PC Steam Console Playstation Xbox indie horror dark mystery detective thriller
When he awakes in an old abandoned asylum, his sole memory is the attempted rescue of a teenage girl with a bomb strapped to her chest. Everything else is blank. With a strange technology fused to his head - used to read and replay human memory - Black travels into the depths of his own mind. To find the truth of his past. To find the truth of what happened. And to answer two very simple questions:‘Why were you there?’ and, ‘Who was the girl?’
Share Share Share
Promote for 50G

ORIGINAL POST = 01-24-2021:
I'm about 5 hours or so into Get Even.
If Condemned: Criminal Origins; Observer; some FPS's; and some stealth games all got together & had a baby - yeah, this game would be some kind of mixture of all of that. This feels like part walking-simulator; part FPS; and part stealth game.
So, combat itself is fine. It's certainly functional. You can shoot enemies, even though the game will often berate you for doing so. You can sneak up behind enemies and kill them, which the game might either berate you or commend you for it. Though, there is a stealth gun, called the Corner-Gun. Basically, you can mount a gun on a special handle with a camera-phone to look around and stealthily shoot around corners. Corner-Gun is nothing short of interesting, cool, awesome, and fun to use.
Combat isn't terrible, mind you, as it is functional - but each piece of it is just not that deep; it's shallow. You also can't take many hits, either. Seriously, you take a hit or two - you're pretty much done; go reload last checkpoint save. But, all of this elements here, when combined - they make for an interesting & at times intense experience, where the sum of its parts make the combat actually worthwhile.
Though, like Observer and Condemned: Criminal Origins - you'll be investigating scenes everywhere. This is actually one of the real elements of the game. You will need to examine areas and find whatever you can. You have your trusty camera phone, which has all kinds of functions: it can light-up areas; it can be a UV light (so you can see enemies or other things); you can use it to see pictures; you can use it to read texts; you can use it to scan evidence across a CIA-like/FBI-like database; etc etc.
If this isn't enough - you play Cole Black and have memory loss. A girl had a bomb strapped to her; you found her; and it blew up. You somehow survived, waking up in a dilapidated mental hospital/asylum. You also have a device on your head, which is similar to an Animus in Assassin's Creed games or the memory device in Observer; and you are re-living memories of yourself & others. Some memories are destroyed and you're trying to piece all of the events together; and figure out the role you played in this; and why the Doctor who is helping you wants you to figure this whole mess out. Since you're playing detective here - yes, you can expect that there a good amount of twists, turns, and reveals. Just when you think you have an idea what's going on...well, expect a twist, turn, and/or rug to be pulled from underneath you.
Like other games I've mentioned, such as Observer & Condemned: CO - this game is loaded with atmosphere & Lore. There is evidence and collectibles everywhere, which all are important to the story and the game-world. If you're paying attention, you might be able to put pieces of the story together from this here - but, you and your mind's not the most reliable narrator; and neither is the device on your head all the time either.
The music in this soundtrack here for this game is great, so far. This score is strong in just so many ways, I don't even know where to begin. Yet, I'll try. Whether it's going and sounding at times like it's the most sinister orchestra-style music that I've ever heard in a game within recent memory or going to try to tug at your emotional strings, when the game decides to enlighten and reveal more about its characters - the music always seems to be on point...and then some.
Running often at 150-240 frames per second at 1080p with maxed-out settings here, this game runs smooth as can be. Not only that, the game's environments look great & very realistic. The character models might be the best looking of models, in many instances - but it's the environments and game-world shines here more so than anything else.
Still, most of these complaints of mine are minor complaints - namely, the ones about the character models not looking so hot; and the lack of depth in the combat systems. Given how great the actual experience itself for the detective stuff especially and the actual story of this game actually is, this is so far worth playing for all of that stuff.
And now, I must get back to this game and try to get even more soaked up in its atmosphere; play detective some more; and hopefully finish up its crazy & awesome story.
------------------------------------------------------------------------------------------------
01-30-2021 = ADDENDUM:
After 11.2 hours clocked-in here with Get Even according to Steam, this game has reached its conclusion. Indeed, what a story & conclusion it was.
While the last few hours or so felt like there was a bit backtracking in areas & with some content, it was also done for story purposes & also for the player to experience with different skill-sets, which is an interesting spin on this...without going into the few more interesting & shocking twists that occur in this story.
The way it brings certain gameplay elements & genres together (adventure, walking-sim, shooter, and stealth game) and interesting ideas, equipment & skills here (like the Corner-Gun and also some of the powers in the short back Chapters of the game) - in the end, all of those elements make a whole where the "sum of its parts" makes them work well & solid together. The combat, gunplay, and stealth is fine, but the walking simulator elements & adventure (puzzle) elements are great.
Regardless, in the grand scheme of things, if you like really good narratives, story, voice-acting, and music - yes, this game should not be missed. Its excellent & twisted story; the twists & turns in this story; and its horror and sci-fi elements - all of those are great.
Overall, taken in as a whole: flawed game and all, this game's still very good overall and definitely worth playing.

Released at the same time as Observer, Get Even shares a lot with it.
Same great atmosphere, uneasiness, detective work, stealth sequences...
But where Observer failed at its stealth sequences, Get Even got them right.
Not too long, not too difficult, you can handle them the way you want.
Want to be a ghost? You can.
Want to get rid of the guards without killing? You can.
Want to run through guns blazing? You can.
And it also features the best gun ever :)

This game is NUTS!!
Well worth buying during discount if you like adventure games focused in story.
During the first hours I started thinking this game could fit as an HBO movie. A lot of suspense, drama, thrill and a bit of action. Even more, near ending it I realized this game could fit better as a movie instead of a video game. The good thing about being a video game is that you can stretch the suspense; delay unveiling the truth.
Near the end of the game I was a bit worried I was stupid, because I couldn't understand some things yet. Mid-game I felt a bit of regret about buying it for the same reason. I thought the writers where arrogant and full of themselves with an overly convoluted story. Turns out the last 2-3 hours are full of revelations (not a simplified burst of explanations. It's still following a structure of narration). So don't worry if you understand what's going on. The characters feel the same way.
During my gameplay I remembered other games. It remembered me of outlast (environment), daylight (smartphone, phone calls), stalker (anomaly) (ambience, aesthetics, graphics) and a bit of existenz.
Amazing soundtrack, perfect fits for mood in relation to narrative and context. The most unique ambient sound effects and mix I've ever heard. They change depending of your actions.
Lasts around 7&1/2 to 8 hours on mid difficulty.
Not advisable for people bad a stealth games, but you could try easy mode.

This is not a typical FPS thriller.
Starting with cons:
AI are really really bad.
Graphics as well as movements are okay.
This makes combat feel like shit.
Now the thing I like is the game seems to know about its cons.
Q. How is it justified like that?
A. The story is progressed in a virtual world - in game.
Think of it like AC's animus.
So the enemies in the game are inside another Virtual world which seems to create buggy AI's.
The game-play is advised to be stealthy but you are given a unique gun in case you're not patient. The game warns you & might punish you for not following its rules but it can definitely be played in any way you desire.
Basically it's meant to be a walking simulator but with a gun to overcome certain situations that are time consuming to figure out. You also have a phone that can do certain stuff like show you a map, can be used as a UV flashlight, scanning environments, etc. which is cool.
Story: feels kinda unnecessarily lengthy & boring in mid section but it gets interesting again followed by a beautiful orchestral score & good voice acting.
Only if AI were at least decent this would be better than so many AAA games. Although it definitely gains a recommendation for an unique experience.
Score: 68/100.

Pretty interesting game and style of play. There is a story underneath even thought it sometimes seems like it's not making sense, especially the latter chapters. Bu the atmosphere is great, and so is the voice acting and the soundtrack. Should be good for anyone who likes the mystery, stealth, sci-fi all mixed into one.

If someone would ask me incredulously: "You really think, games are a form of art?!" I would show him this game.
Though the gameplay has its flaws, the incorporation of music, sound design, narration and gameplay is SO good, I think this game is underrated.
Sometimes it feels cluttered with features, like the designers wanted to much.
But the experience is unique nonetheless.
The story and twist had an impact on me like it happened with SOMA or Bioshock: Infinite.
Recommendation!

It's great and I'm only adding this review to balance out people's garbage take that this supposedly has bad mechanics or its slow start makes it bad...