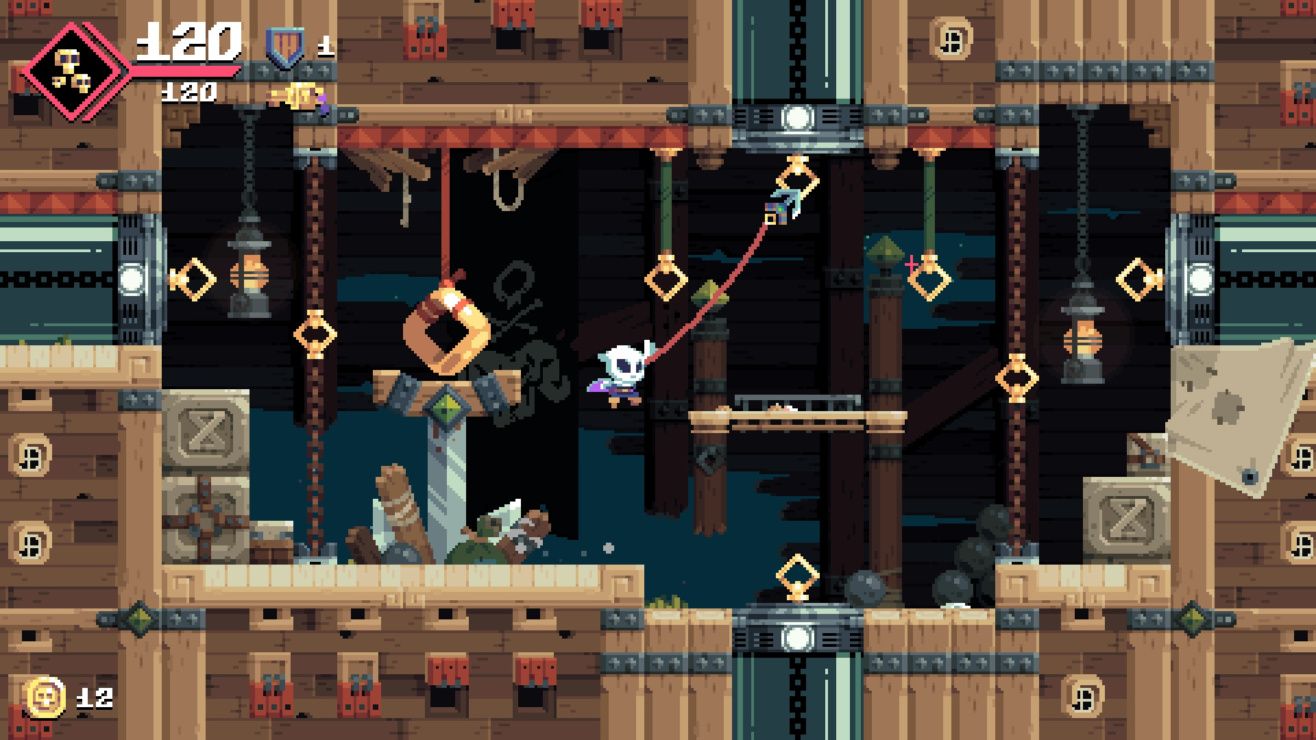 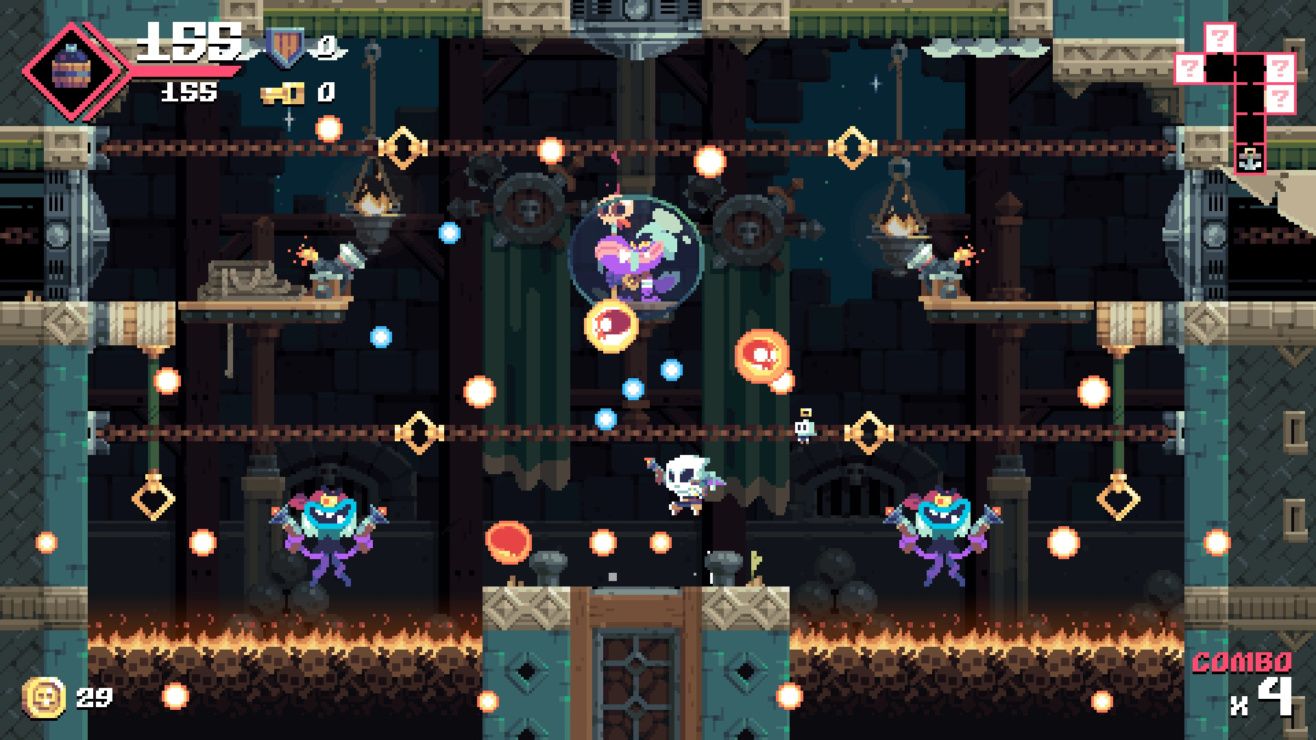 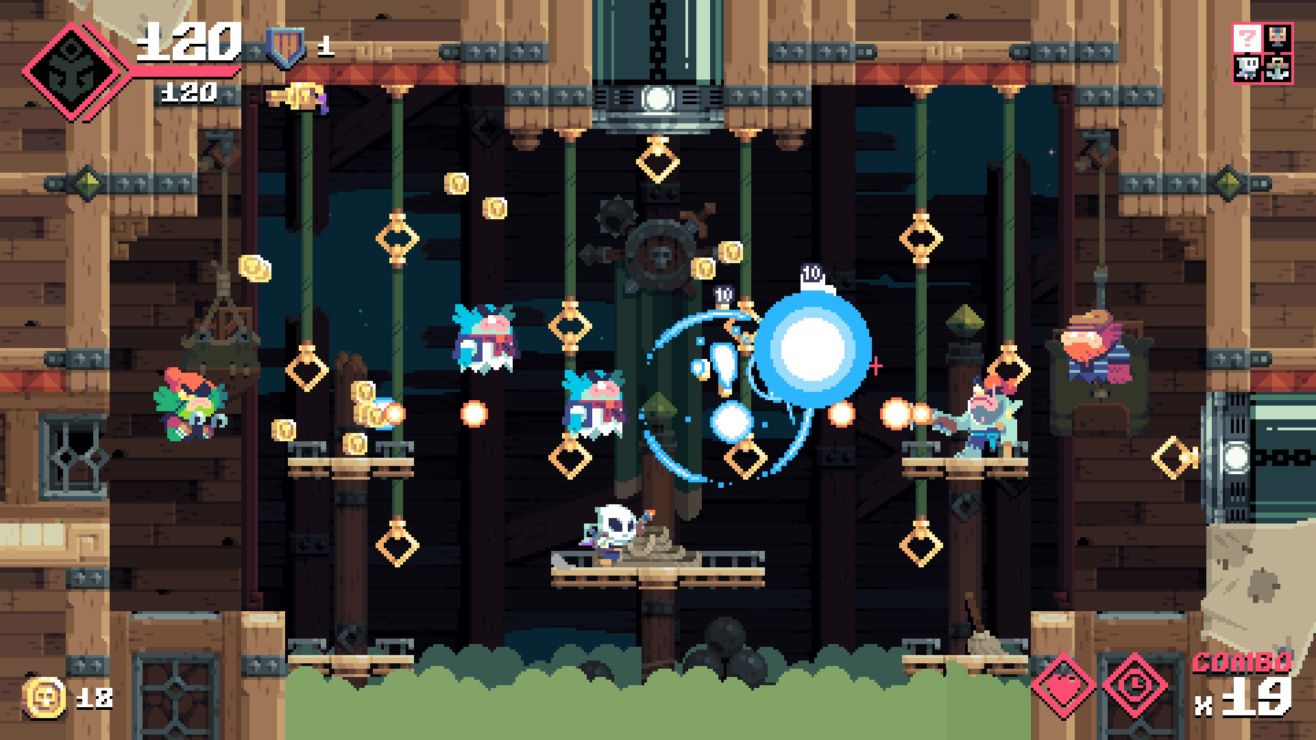 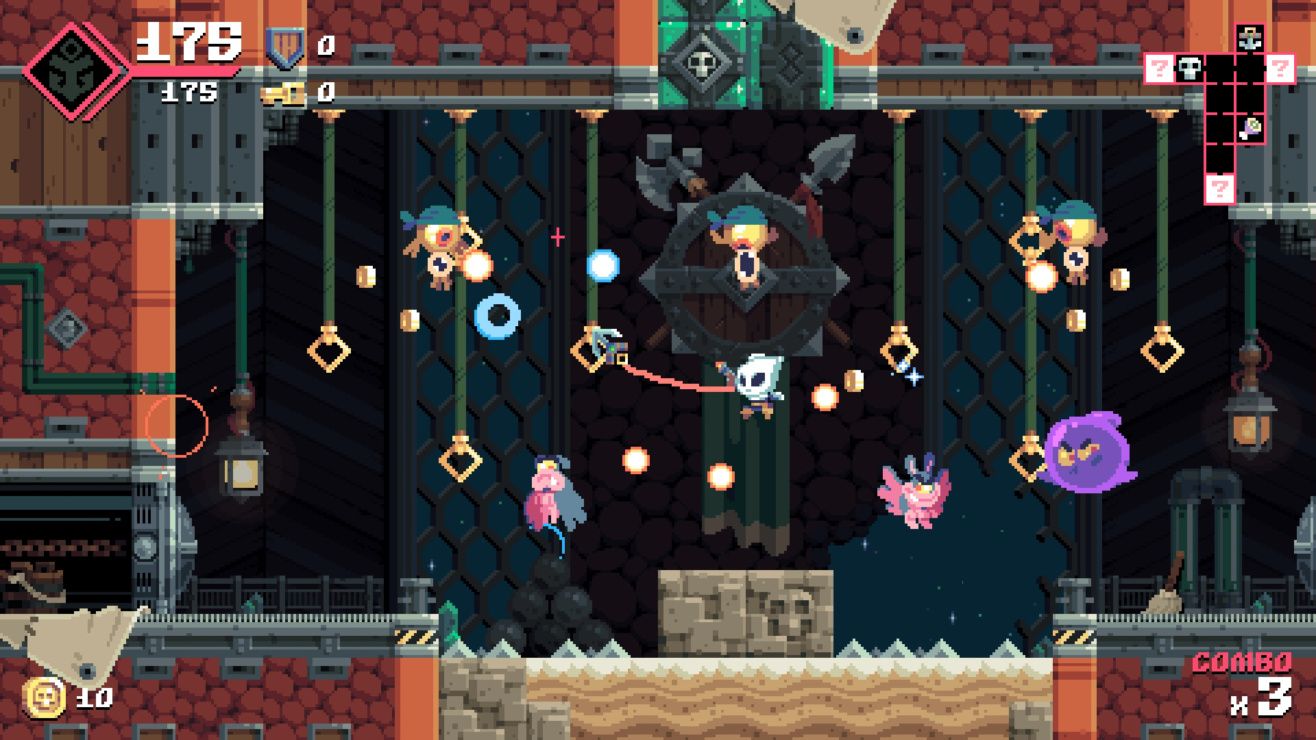 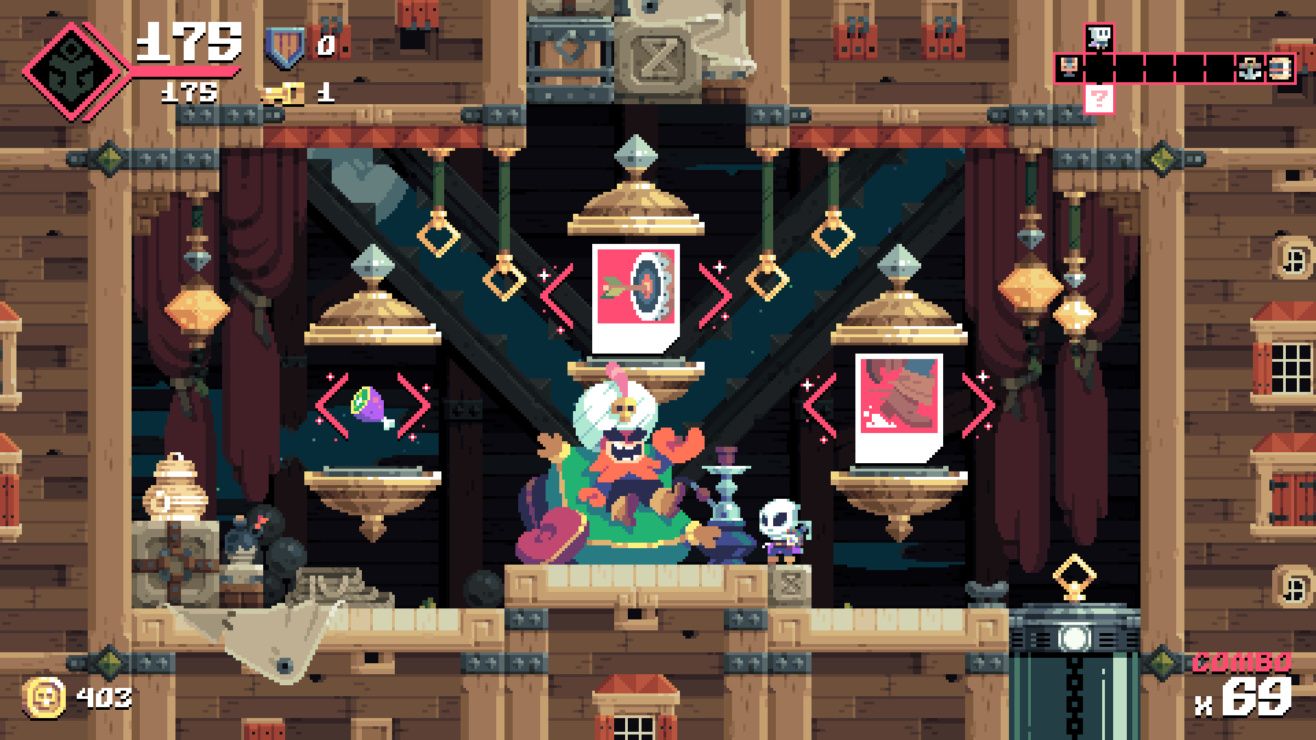 PC Steam Console Playstation action Xbox indie adventure Nintendo singleplayer platformer pixel sidescroller
Live the life of space captain Flinthook! Armed with your mighty hookshot, your uncanny slow-motion powers and your trusty blasma pistol, plunder and fight your way through an infinite variety of randomly-assembled spaceships for treasure, loot and fame! Flinthook is a fast action-platformer with "roguelike" elements. Become space's greatest pirate with your hookshot, pistol and slowmo powers! Zip around with your mighty hookshot! Aim freely and toss your giant anchor at golden rings to propel yourself around the levels at high speeds, giving you the agility and swiftness needed to dodge hazards and enemy bullets.
Share Share Share
Promote for 50G

200 character summary
Flinthook is a great rogue lite action platformer with a lot of ability customization, beautiful pixel art, a great soundtrack and some solid gameplay. Don't miss out on this absolute gem of a game.
Story & Characters 8/10
You play as Flinthook, You are an acrobatic space bounty hunter out for space pirates. The game has a lot of lore and some damn fine animations. There is a lot of detail in every object and there are a lot of secrets to uncover I like the whole backstory and universe but especially the characters are done very nicely, They all have a personality, even if that personality is a bit cliche, I love the protagonist, He says nothing, but the gestures he makes speak for him.
Gamemodes & Gameplay 9/10
The game has Daily runs, Weekly runs, but the main game is where it is all about, The game has 4 different bounties, or bosses, To find them you need to clear pirate ships to find ghost gems, You feed these ghost gems to your compass and if you collected enough it will print out a map to the boss, Then you clear the boss and you completed the bounty and you unlock the next one.
The ships are full with enemies that are fairly easy to kill, All ships have a mini boss and a big chest at the end, Opening the chest ends the level and takes you to the next level select screen. Platforming is where this game gets hard, Spikes won't kill you directly, But your health can drain pretty quickly if you make a mistake. You will find a lot of things, You will find gold coins, Black Market Coins, Subweapons, Health, Perks and sometimes relics or lore. Gold is only spendable in the run, If you finish or die it will be lost. Lore and the Relics are like collectables, and the Black Market Coins can be spent in the Black Market for permanent upgrades.
You also level up, Levels unlock more stuff in the black market, But also give you booster packs with a Perk or 2, You can activate these perks before you start a run, You have a limited amount of slots and each perk takes 1 to 4 slots, These perks can be anything, from insanely high jumping to more powerfull attacks or anything really, I counted at least 30 different perks, But there are probably much more.
The gameplay itself is very quick, you have a grappling hook that can hook on rings and this is the fastest way to navigate, It can be a bit tricky when there are spikes on both sides. You can shoot your gun, You can jump, You can carry 1 subweapon, There are only 4, We have a thing which makes you invulnerable for a few seconds a grenade and 2 other weapons. You also have a Chronobelt which gives you the ability to slow down time. The game has a lot of unique mechanics using these few abilities.
The game works with a map and rooms system, The map are square blocks and the rooms have an exit on either the left, right, ceiling or floor, Or multiple exits. There are also secret areas which can be hard to spot. Most rooms are battle rooms which are locked untill you clear them or are platforming rooms in which you just have to reach the other side. There are also shops with NPCs, Treasure rooms, And then the Miniboss room and the Big Chest room. The Boss ship is never that big, It is mostly focussed on the battle.
Graphics & Soundtrack 10/10
The game has amazing pixel art and just Beautiful animations, Every little thing is animated, and animated well, A true aesthetic pixel masterpiece. The enemy design is very nice, The Characters are even nicer, The level design is great, I do think it is a shame all ships look like eachother, There are very subtle differences between ships for the first bounty or the second bounty for example. The soundtrack is also amazing, I love it, No other words for it, And it is not just 1 song, All songs are great, The graphics and the soundtrack together are just perfect
Performance & Support 6/10
Sadly the game has a few issues, Firstly it is locked to 60 fps Which is not cool, It is not annoying, but it is noticable if you are used to 120 fps, Another problem is that the game crashes when a controller connects at any time after the game started. Other than that I had no issues, No random crashes, bugs or stuff that did not work, Achievements and cloud save also work fine.
Endgame & Replayability 9/10
The game has a good replay value, You can always keep improving on the daily and weekly challenges, There is an endless mode after you completed all 4 bounties which is just insane especially when your health starts draining. All the available perks let you tweak your character, and due all the random generation and extra perks you get in your runs no game is the same. I think all the collectables are done nicely and they also add a bit to the story and there is a lot to discover, The nice aesthetics also make it worth your while.
Conclusion 9/10
In my opinion Flinthook is a must have, Especially if you like pixel art, rogue lites, speedrunning or extremely challenging platformers. The game does everything right, It is a shame the game has a few minor issues, But they certainly don't get in the way of the quality gameplay this game offers.
Follow my Curator Page for more Reviews like these
Game Info
# of players
Single Player Only
Steam Cloud Save
Working fine
Controller Support
Yes, Xbox One Bluetooth Working
Achievements
Pretty hard
FPS on Ultra 1080P
Locked to 60
Ram Usage
500MB
Installed Size
420MB
Launch Command
gamemoderun %command%
Issues
A few
Operating System & Hardware
OS
Arch Linux
Kernel
5.5.8
DE
Gnome 3.36
CPU
Intel I7-6800K Hexa Core @ 4.2 Ghz
GPU
Nvidia Geforce GTX 1080 (Nvidia 440.64 Drivers)

Very cute and enjoyable rogue-lite game! The game does a great job of slowly ramping up the difficulty, and the progression is JUST fast enough to keep you (flint)hooked. Tons of unlocks, daily challenges, all the good stuff.

This is one of the most enjoyable roguelikes I found. The hookshot really is its selling point, making it into a pretty unique action-platformer. Jumping, grappling and shooting really makes you feel agile and powerful.

It's a good roguelite with some annoying elements like slowing time and I just never know when to use the consumables... But yes, I'd recommend this hidden gem

Some people love it and some people hate it.
I honestly enjoyed it, so I don't get the hate.
The gameplay is smooth and simply perfect.
Even the in-game mechanics are really nice.
I did enjoy those challenges and everything.
Even the achievements we're fun to unlock.
I honestly really don't understand the hate.
This game deserves my big positive review.

Mad at myself for not playing this sooner this game rocks

A very fun game.Recommendable to play with controller. The game works perfectly with my Xbox controller. The hook mechanics are great fun and the pixel graphics are very nice.
Recommended.
8.5 / 10