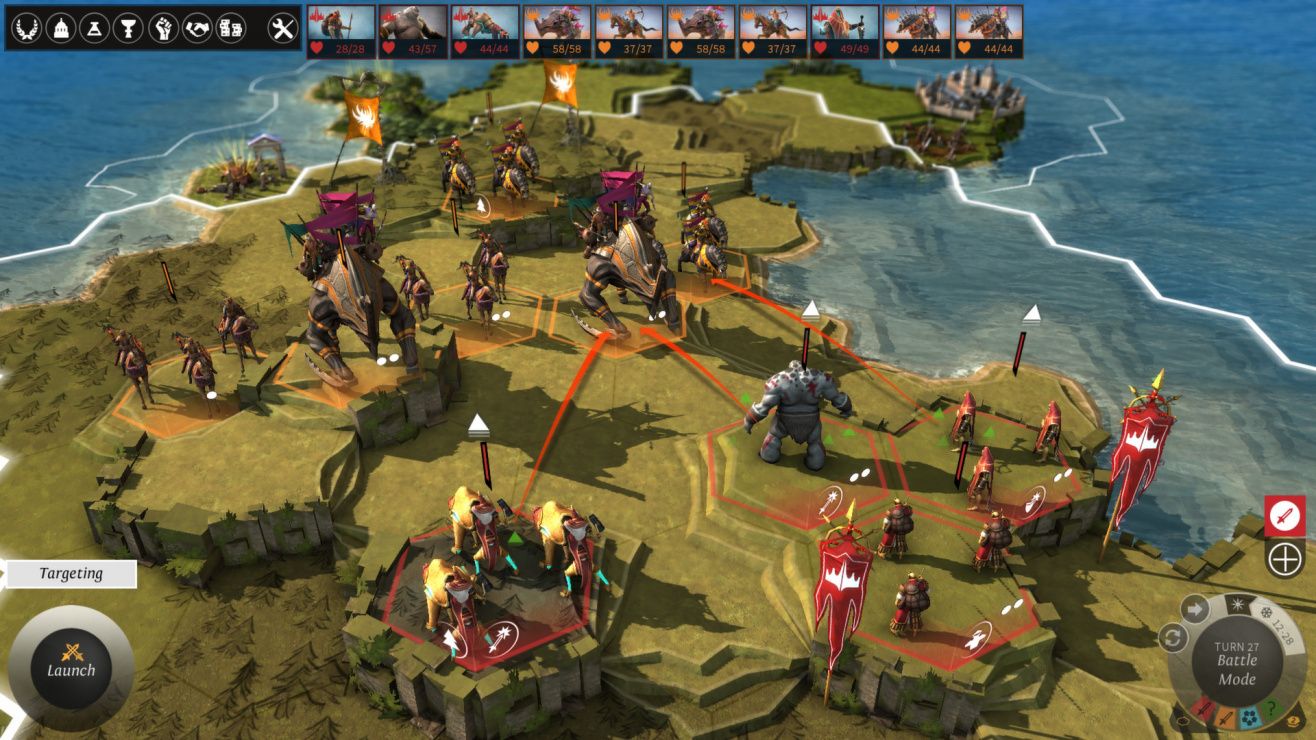 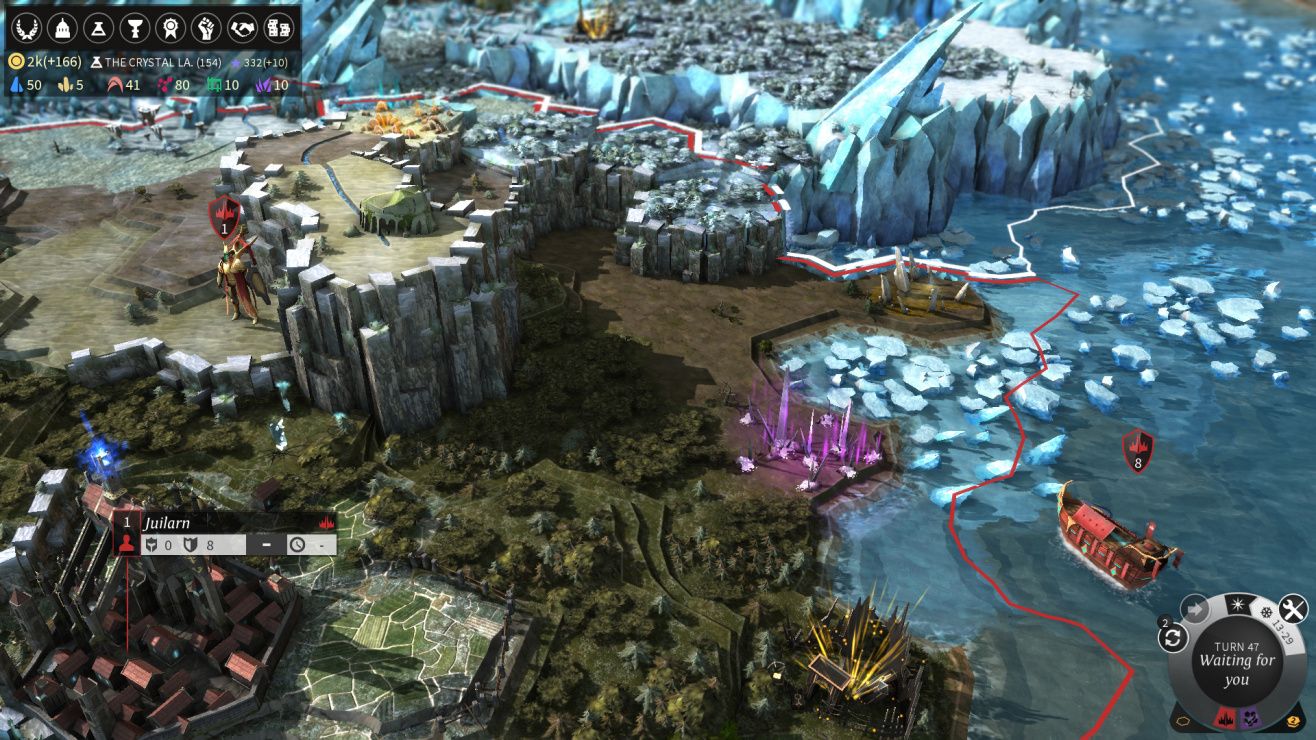 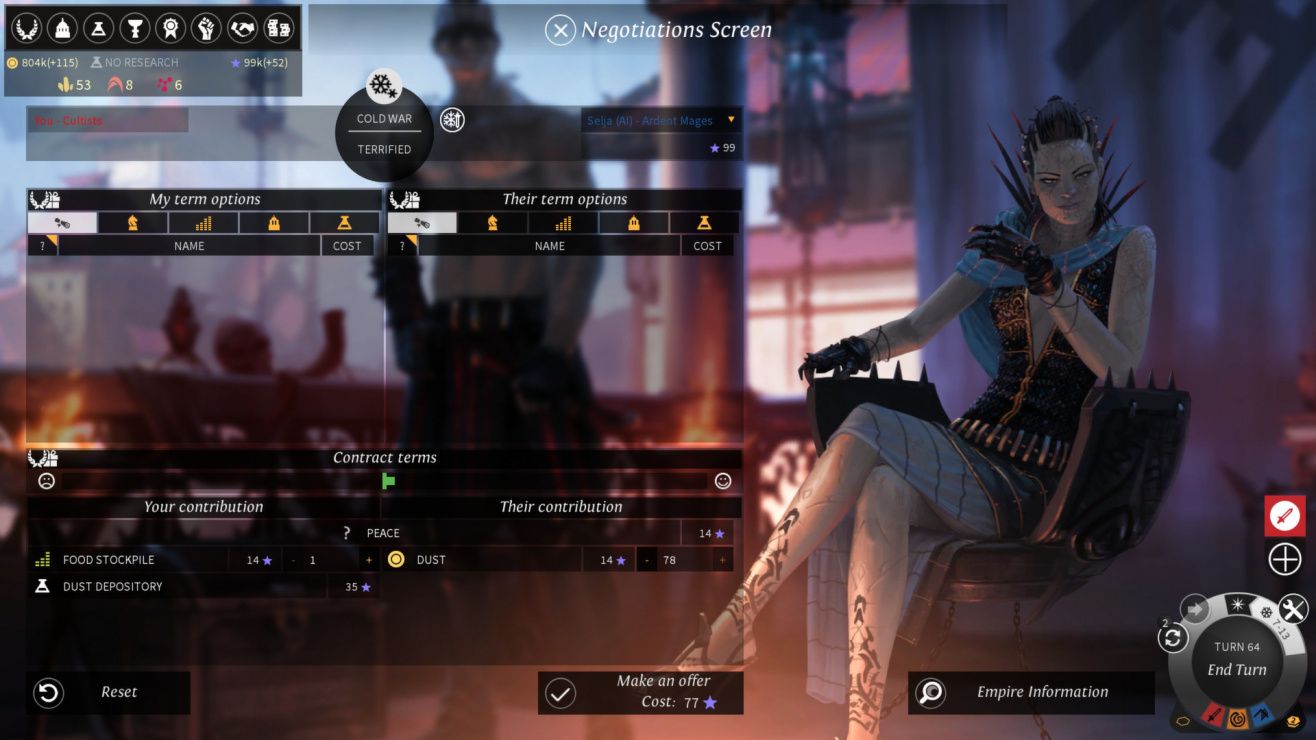 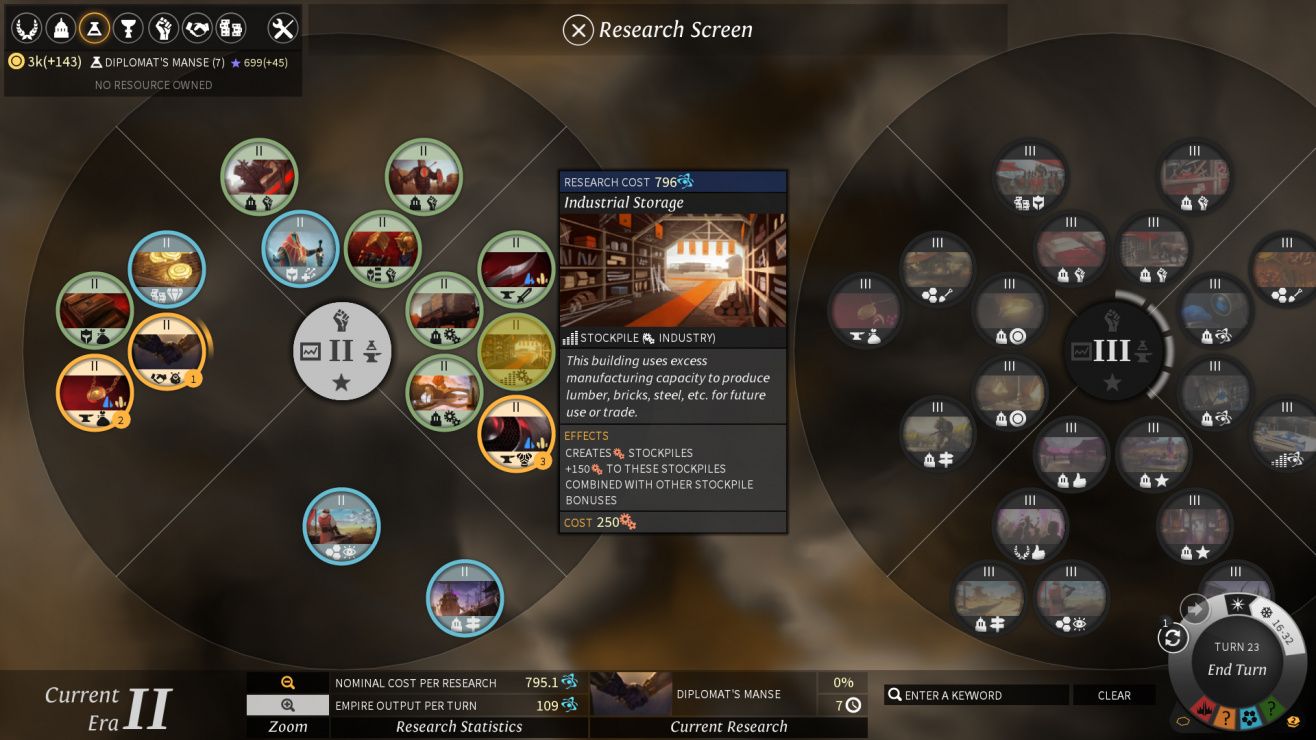 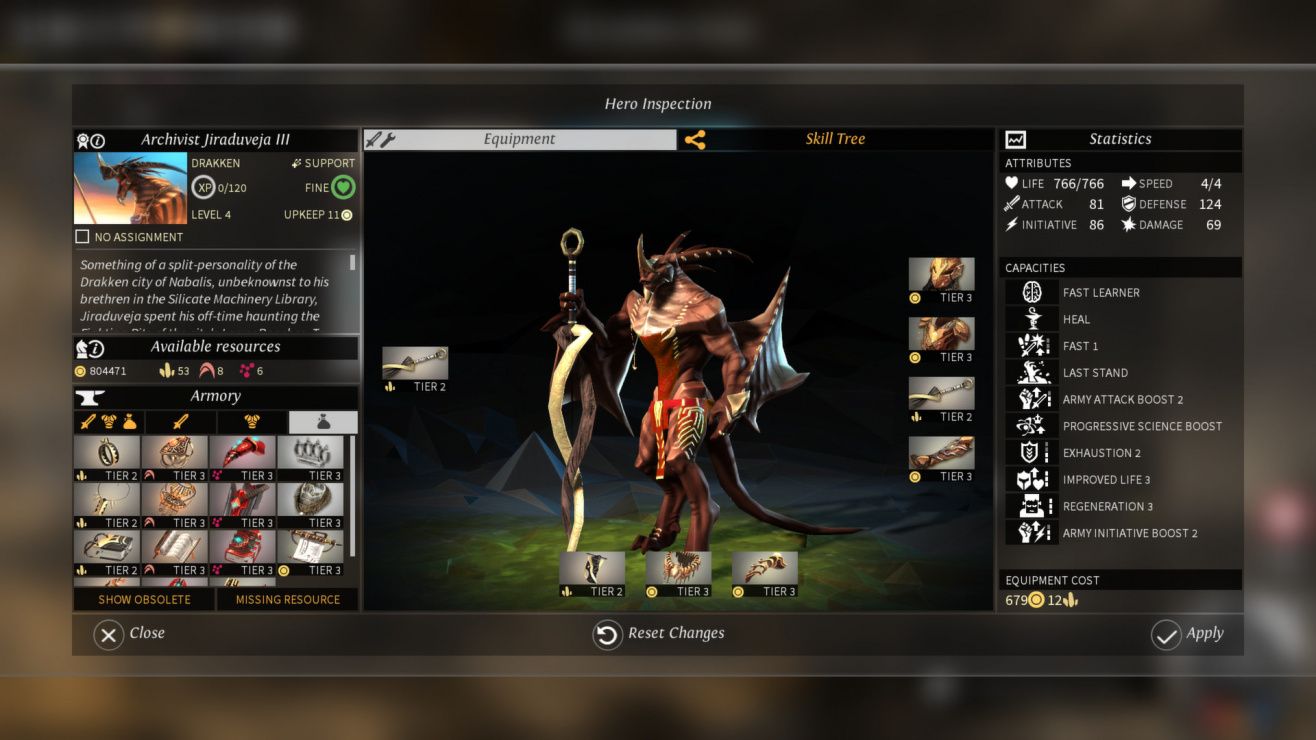 PC Steam indie adventure rpg strategy fantasy turn-based tactical
Create your own Legend Another sunrise, another day of toil. Food must be grown, industries built, science and magic advanced, and wealth collected. Urgency drives these simple efforts, however, for your planet holds a history of unexplained apocalypse, and the winter you just survived was the worst on record. A fact that has also been true for the previous five. As you discover the lost secrets of your world and the mysteries of the legends and ruins that exist as much in reality as in rumor, you will come to see that you are not alone. Other peoples also struggle to survive, to grow, and perhaps even to conquer. You have a city, a loyal populace, and a few troops; your power and magic should be sufficient to keep them alive. But beyond that, nothing is certain… Where will you go, what will you find, and how will you react? Will your trail be one of roses, or of blood?
Share Share Share
Promote for 50G

EL is a really enjoyable and challenging, turn based strategy game.
It is right up there with Civ 6 which I love too.
Perhaps the most attractive aspect is the inextricable interlinking of the many active aspects of the system, the game is never the same twice because of this and one's own strategic approach which is inevitably educated by previous sorties into the game environment.
I am 67 and a retired senior manager so its just like work to me. (something I loved too)
Best thing of alll - EL has a good tutorial and is easy to pick up particularly if you are accustomed to turn based strategy games.

It's like Civ, but you can send an army of ghost demons and snake hydras led by a Twi'lek elf ranger to capture a giant roly poly so you can magically absorb hallucinogenic stardust from the earth to make your civilization of mushroom people stronger.

Do I recommend this game? Absolutely!
It's Civilization V and Heroes of Might and Magic if they had every single mechanic blown out of proportion to keep it interesting. Yes the games can get quite chaotic if you're new to it but i'd suggest you play this for fun rather than competitively because there is so much to do!
Imagine 13 factions with their very own systems.
1. Magical Crusader Faction focused on Expansion Victory who needs no food yet focuses and eats and exists purely out of gold
2. Dragon Faction which focuses on Diplomatic Victory and forcing Truces/Peace with players
3. Puppet Faction focused on Supremacy Victory who cannot produce settlers yet it settles in and mind controls (Neutral faction) cities
4, Insect Faction focused on Elimination Victory who eats themselves and everyone it kills to raise armies of undead whose sole purpose is to get bonuses for every player its at war with ( They are not even able to do any diplomatic choices other than declare war )
5. Merchant faction focused on Economy Victory which gets a cut from every single purchase other players make, they have 1 city which can forever travel on its own yet cannot declare War. They however can hire or disguise as neutral factions and raid other players without declaring War or blowing cover.
6. Mage Faction focused on Science victory and tons of spells at their combat disposal
7. Human Faction who focuses on Science victory and can teleport between cities
8. Water Abomination Faction who focuses on Expansion victory through Ocean domination, they live and breathe inside oceans with a power to see invisible units and stirring Chaos in neutral Cities through mind control
9. Furry Faction who focuses on Quest completing victory by being able to adapt to both Winter/Eclipse/Summer and travel the lands easier than anyone else. ( They require double of everything to grow inside the Cities )
10. Elven Race who focuses on Wonder victory and are unrivaled in Forest combat. They Study enemy armies better than anyone else if they're close enough
11. Assassin Spy Faction focusing on Supremacy Victory who travel the lands completely invisible and only means of obtaining Research is through stealing it from enemy cities they infiltrate and sabotage.
12. Plant Faction who focuses on Supremacy Victory yet incapable of having more than one City, However they can build outside of their own Civilization area draining resources from the whole planet. Even teleporting its units to them if they get atttacked. They also have higher influence on Urkans ( 3 titans who roam the lands and can attack civilizations )
13. Lava Faction who gains bonuses from Volcanic environments and can actually spread them by terraforming the planet.
So Yeah that's a lot of Factions but wait till i tell you theres 80+ different Neutral factions who inhabit every land and can be defeated/allied/recruited. They can be both a nuisance and extremely useful depending on how you deal with them.
This Game has a Quest system: Every once in a while you're going to get different quests that you need to fullfill for insane rewards, they can be for other factions, for yourself or straight up global events. The Most important one however is the Main Storyline quest which is unique to Every Faction. They normally have 10+ phases that need to be completed to win the game and believe me they're not easy.
This Game has RPG system. Yes You control your very Own Heroes who can Control armies/Infiltrate Cities/Govern Your own Cities and so much more! Along the way they level up and have unique Skill Trees to be chosen, Unique Gear that they can equip to help them in their actions and of course depending on Class/Faction they have their very own actions to take.
This Game has INSANE DLC IDEA; If the host of the game has tons of DLCs the other players do not need to have them to play O.O . YES! They can ACESS ALL OF DLC CONTENT FOR FREE! INCLUDING THE FACTIONS!
This Game has Custom Terraforming of the maps mechanic. You can select how well you want every resource to be placed, how many rivers, oceans, islands, continents, mountains, volcanos, dangerous enviroinments, winters, summers and their lengths. Everything can be managed so not once you'll get the same map. but if you do want the same map just copy the generated seed. This game has probably the best map generation i've seen in any strategy game of my life.
This game has Winter/Summer/Eclipse Seasons who influence the planet/factions and have its very own Skill trees for Winter. Get ready for harsh or pleasant times.
This game has heroes of might and magic combat, id suggest you click auto play because these fights can take a while and players may not want to wait for you to finish them.
This game has so much more that doesn't fit in here for you to discover. I hope you'll have a ton of fun messing around with your friends secretly raiding your cities disguised as a neutral faction saying it's not really them <3

Endless Legend is a lovely game with deep strategy that's a singular pleasure to play, but can sometimes disappoint you in finer details. Know that if you're never going to play multiplayer, you're not getting the whole experience - so bring a friend.
9/10

Better than Civ! Each faction plays differently, and comes with its own storyline. Many other 4X games felt like paying a different race/civ was a slight tweak on the same formula, but in Endless Legend each felt fun in a new way. Innovative gameplay, fun tactical battles, and excellent writing. One of my favourite games of all time!

TL;DR Treat it as a war 4x game and you will have a good time!
This is one of the better 4x games out there, and while it does stick pretty close to the typical 4x formula overall, there are a few differences that make it feel its own.
All the basics work great, cities, people, resources, hexes, etc. In addition, a couple of things this game does differently from most 4x games that work great:
-The map is split into provinces and there can be only one city per province. LOVE THIS!
-Combat is done via mini-game turn based strategy on a field. Skipable in most scenarios but you can pull some surprise victories through good tactics.
-The story takes place in the larger 'Endless' universe. Empires are pretty medieval fantasy, using swords and magic, but a prior alien race left technological artifacts about. Each faction gets its own story. All of it is fun.
-Factions have some truly play defining abilities and drawbacks. For example the Broken Lords do not use food as a resource AT ALL, which as a Civ player just about blew my mind.
Now for the not so good
-Every game devolves into an arms race and war eventually. There is no difference in preparing to defend or attack, so building up your military means, pretty much no matter what, you will eventually conquer territories. Despite the vast number of ways to win the game (Diplomatic, Quest, Economics etc.) 95% of my games were essentially military victory. The variety of ways to win is a bit of an illusion
-The AI is bad at combat. Higher difficulties does not make the AI play better just gives them more and more discounts and advantages so they can make up for bad decisions with sheer quantity of units. As example, the AI sometimes retreats thereby losing half the armies health and then immediately engages on their turn with now even worse odds.
-Too much DLC. I don't know why this is called "Emperor" edition if there is still $70+ of DLC to buy. I find this anti-consumer and a bit deceptive.
-Cultist faction is not balanced. I found the cultist faction nearly unplayable as their drawback of only having one city is not really made up for by converting villages. Its always funny to me when playing against them that their military score is so high (often highest by far) but I can beat their unupgraded armies easily. Neat idea though, just feel like it needs work.
Overall I can recommend this game. Treat it as a mostly War 4x game and you will like it.