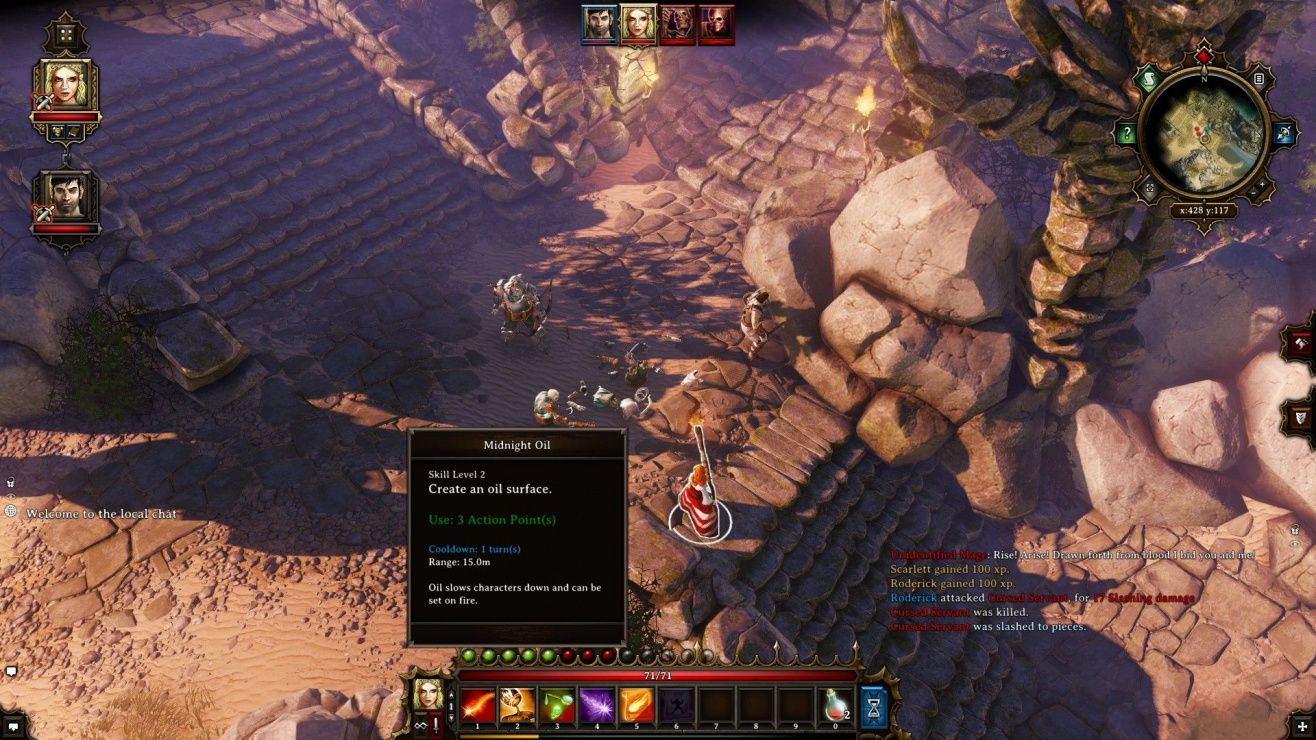 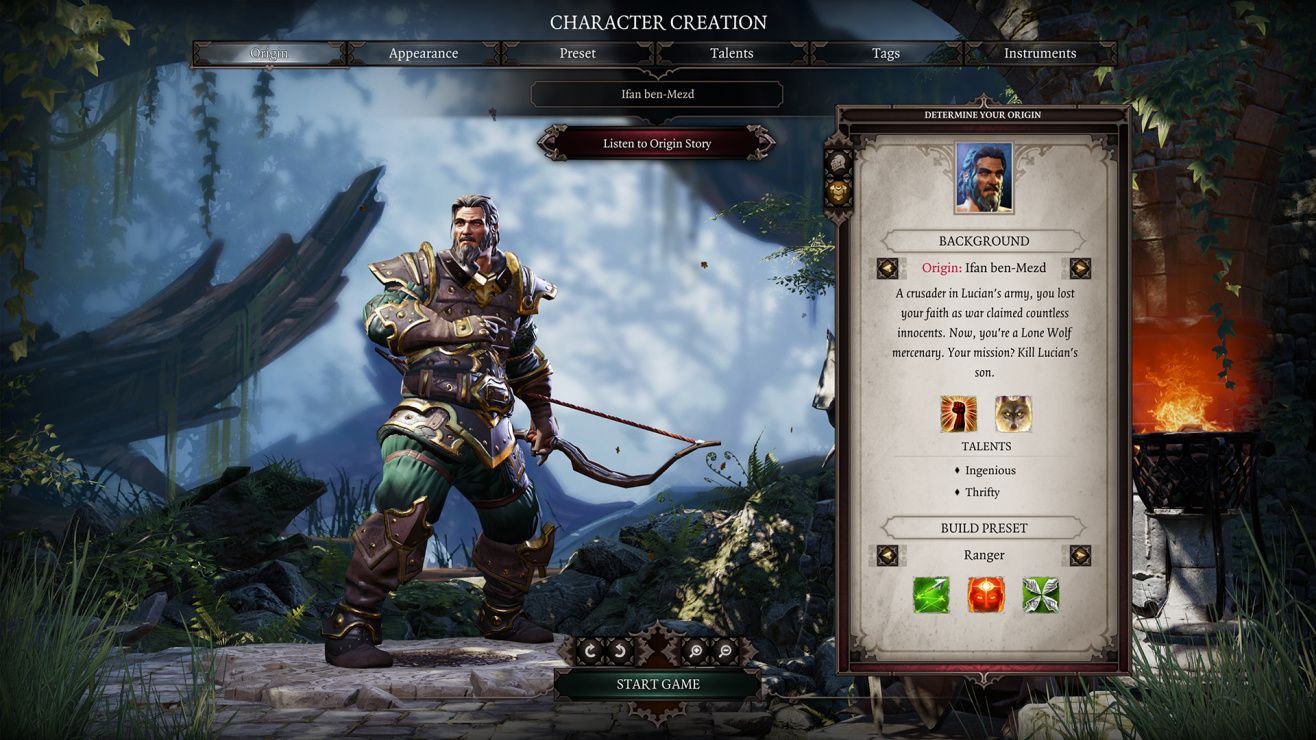 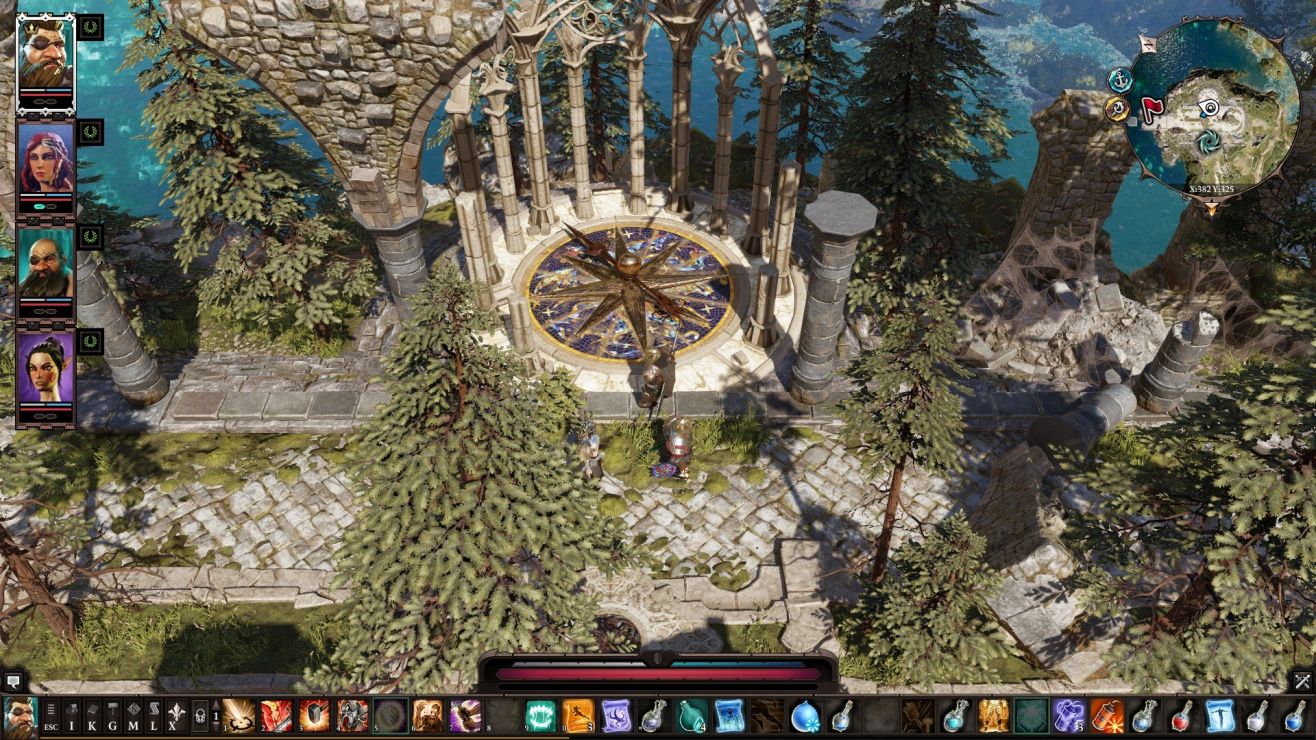 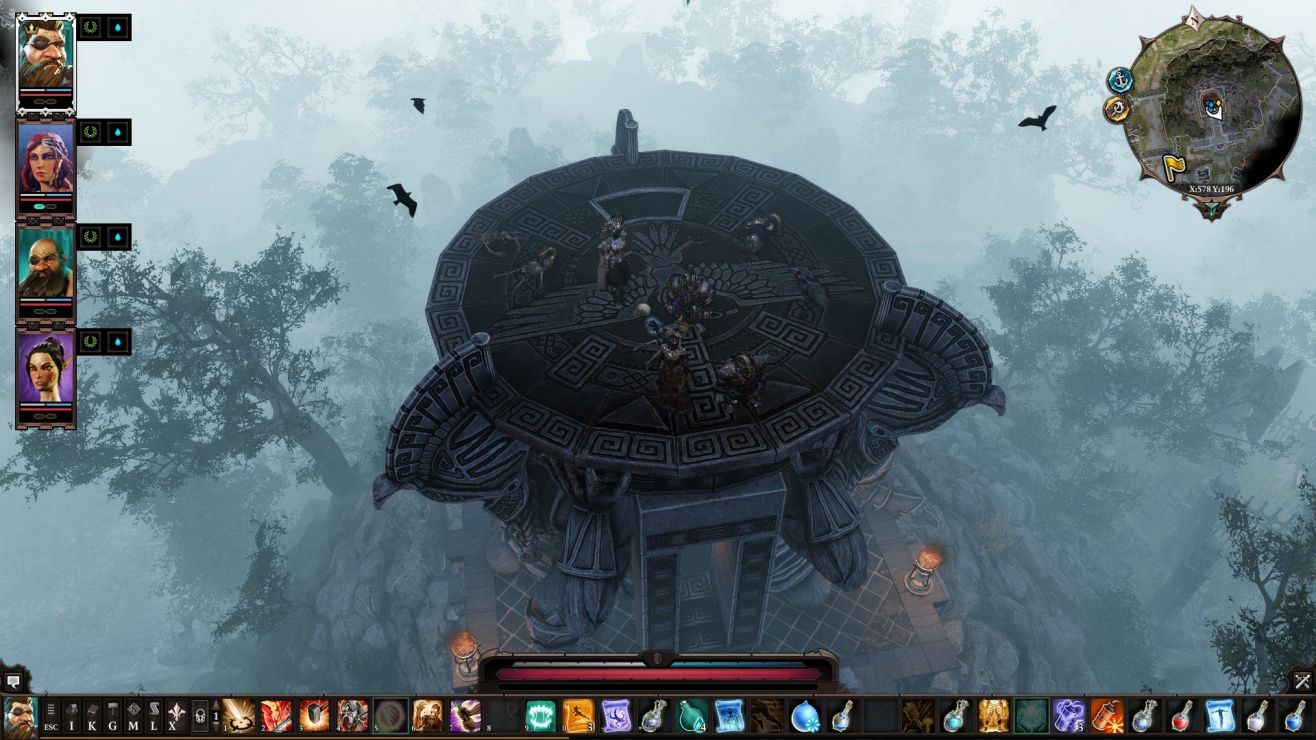 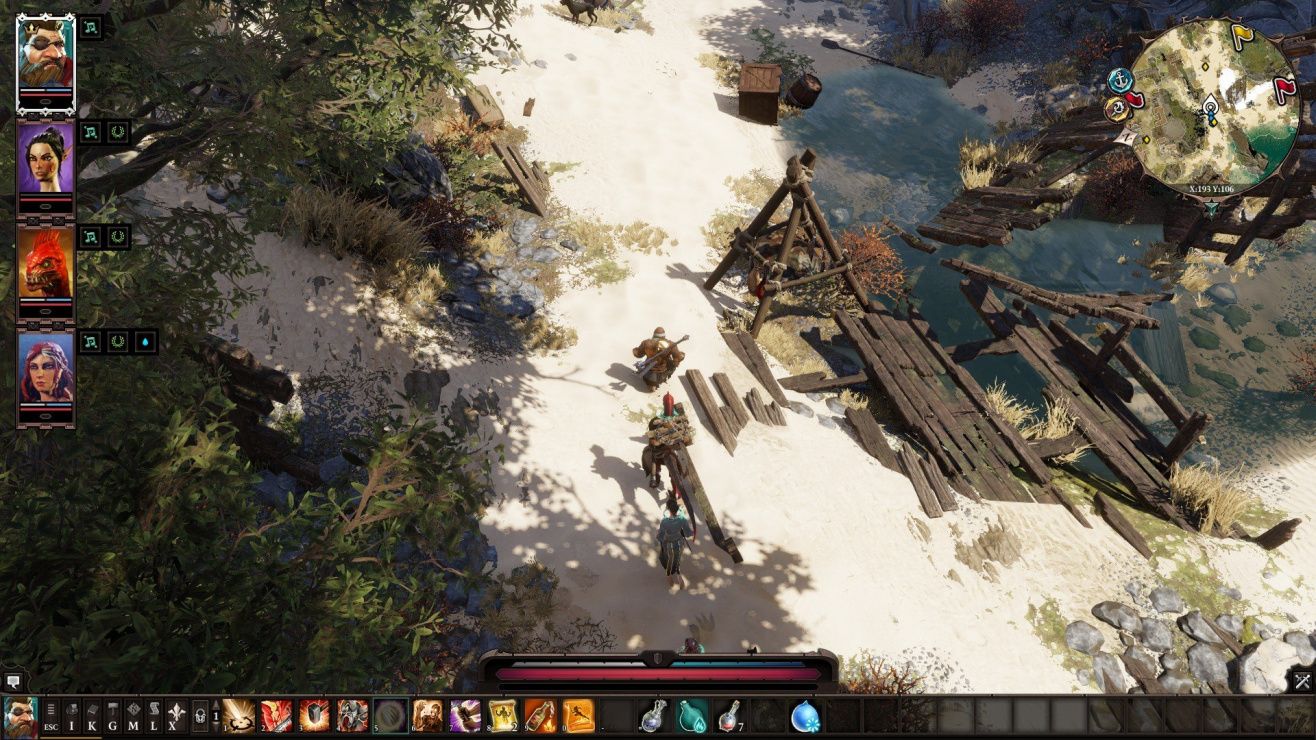 PC Steam Console Playstation Xbox rpg story fantasy co-op role-playing turn-based magic sword
The Divine is dead. The Void approaches. And the powers lying dormant within you are soon to awaken. The battle for Divinity has begun. Choose wisely and trust sparingly; darkness lurks within every heart. Who will you be? A flesh-eating Elf, an Imperial Lizard or an Undead, risen from the grave? Discover how the world reacts differently to who - or what - you are. It’s time for a new Divinity! Gather your party and develop relationships with your companions. Blast your opponents in deep, tactical, turn-based combat. Use the environment as a weapon, use height to your advantage, and manipulate the elements themselves to seal your victory. Ascend as the god that Rivellon so desperately needs. Explore the vast and layered world of Rivellon alone or in a party of up to 4 players in drop-in/drop-out cooperative play. Go anywhere, unleash your imagination, and explore endless ways to interact with the world.
Share Share Share
Promote for 50G

This may just be the best game I have ever played. I hadn't played the first Divinity Original Sin game, but I purchased this because I enjoy rpgs, turn based games, and games that can be played local coop, but never did I expect what came next - my girlfriend liked it too. We played this game every day for weeks and weeks, loving the exploration, expansive story, and difficult but rewarding combat. Finally we beat the game, after maybe 200hrs, in what was a campaign where we thoroughly explored every corner of the game. So then we bought Divinity Original Sin 1, beat that, then started a lone wolf campaign on 2, beat that, and still we were finding stuff we missed through the first playthrough. I seriously cannot recommend this game enough. Also, the aforementioned girlfriend is now my wife, and I am not saying that is because of Divinity, but it certainly didn't hurt.

And that's it, after 278 hours of play, the adventure is over...
This type of game that you wish you could forget so you could rediscover it like the 1st time, where you discover everything, a bit like a child
It's a game made with passion for video games, to tell a story, to make the player laugh too, and to make him a little melancholic or horrified or even sickened sometimes
Divinity OS 2 will have marked my young adult life, like Sonic and megadrive games, Pokémon, FFTactics, Zelda and gameboy / gamecube games, Warcraft3 (TT), or Mass Effect and other PC games did in my childhood and adolescence (I surely forget so much excellent games)
It's a 20/20 for me. The work is titanic. The game is really made with passion. The studio is very talented.
So when Steam asks me "Do you recommend this game", I say:
Yes! Because this is where you feel that video games are an experience, an adventure to live!
I went through Rivellion with my buddy, like I went through Kanto (Pokémon), or Ivalice in FF Tactics as a kid!
Atmosphere:
Many of us probably remember our adventures in Pokémon or other games in our childhood. We roamed, discovered and lived in these worlds!
Here, it's the same thing, and not alone this time: I was with a very good friend!
We met frequently to venture into the world of Divinity as a lightning lizard warrior or a skeletal assassin with a mysterious past...
With our companions Lohse and Ifan, and Maladie, and Gareth, and Jahan and Han the survivor kid and Sir Lora and so many others. Impossible to forget...
They exist! Stop lying, I know they exist !
Our choices were important: We decided to do justice to this or that person, provoking reactions (or death) in certain characters, slapping a few Magisters around when necessary
And of course, we STRONGLY decided to stea... Borrow a lot of spells and equipments from the merchants, while the other one was distracting by chatting...
... What? We didn't have the money and we had to save the world ! Well, we had the money, but you never know, maybe one day we will need it... !
And then stealing, it's fun. And exhilarating hehehe
Gameplay:
A 3D tactical turn-based game, to play with friends. Really ! Don't play this game alone, I'm sure that with at least 1 buddy (or 3!), you will exploit the game to its full potential!
Also, you can change your skills and class at any moment in the game, it's very flexible ! I played rogue all my game, and in the last chapiter, I decided to play with spear and War skills ! I really enjoyed being able to switch like this, as I want ! The game want you to take FUN, not "suffering" your "bad" class choices !
Too bad, I don't know anyone who is ready to take on the role of a GM (Game Master), to live a personalized campaign! Because it is a mode apart from the main campaign!
Music:
Extremely good and fits perfectly with the atmosphere of the game. This kind of OST that we listen to when we work and that makes us live our adventures again when the song becomes EPIC!
In summary:
Titanic content, assured re-playability for those who wish to know what would have happened if they had answered something else than "FIIIIIIIIIIIIGHT", and I repeat, the fact of being able to play with friends makes the game so much more pleasant to do!
*Sob*
But no, I'm not crying... I'm just allergic to emotions!
I would like so much to forget this game to be able to rediscover it
Please play it, at least give it a try, and let yourself be immersed in Div's world!
In our case, we will do it again in HARDCORE mode !
Peace guys !

slept with a lizard

Played as a lizard prince exiled for summoning demons, gathered a crew, extinguished burning pig mages, consumed the soul of a cursed necromancer, saved an ice dragon from a mage controlling zombies in a cave full of giant insects shooting blood, turned a skeleton bandit into a chicken, talked to a dog and saved his girlfriend from fort dungeons, Sang for a giant ship made from dead elves, had sex with a skeleton from a forgotten race, and talked to the god of imps.
I love this game.

In summary: This is my favorite RPG-type game since Gothic 2. They basically improved every single flaw that I had with DoS 1, and created game that is the closest thing to what I would call a "perfect" RPG game. Must play for any RPG fan in my opinion :)
Things I disliked most about it:
❌ Nothing major really, only slight nitpicks like Necromancer costing too much AP, slow-ish walking and small things like that (which are either optionally included in gift bags, or easily fixed by mods - this game has really good modding support)
Things I liked most about it:
✔️ You can kill everybody (including main NPCs and even yourself)
✔️ All lines are voiced - and it also has really good voice acting
✔️ If you do good things you unlock unique "hero" tag in dialogues, and bad things give you "villain" tag
✔️ You can interact with all objects in the world and even move / throw objects around (you can even kill people with these objects, ex. throw something really heavy on somebody and he will die or get damaged)
✔️ Interesting story and side quests with very well written lines
✔️ Beautiful & diverse world, with great graphics and music
✔️ Amazing class system and spells - it's really fun to explore all of the different combinations in combination with environmental effect (it almost feels endless)
✔️ Freedom to solve quests however you want. Just like in Gothic games you don't have to pick quest in order for some NPC to appear, you can go ahead and explore however you want, and if you already found some certain item for dungeon you can go "oh you mean this?" and just end quest right there
✔️ Skills / attribute system - one of the best in any video game I've seen so far, each point can be useful for all of the classes, and you can create very cool variations.
✔️ Very big replay value! - I can see myself replaying this game for years to come
NOTE: I didn't even play multiplayer yet but I heard from friends that It's also really good! :)

One of the best RPG's I've ever played. It most definitely has its flaws but the challenge you can get from this game is absolutely mint.
Some things to note before buying this game
1) It's armor system is unlike most other games. It blocks status effects and crowd control until it is removed then they can be applied (a couple of feats you can pick up can bypass this on enemies but that's the exception not the norm)
2) If you're playing through this game for the first time, don't feel bad if you can't play it at the highest difficulty. It's not meant for a first time playthrough but to challenge experienced players on subsequent ones with more enemies, more intelligent enemy AI and (of course) stronger enemies as well.
3) When building your party composition, it's better to do all 4 magical, all four physical, or two and two. I do not recommend you go with one person solely as one thing and the other three as another as that one person all by themselves will not be contributing much to fights.
4) There is no "tank" in this game. That sort of role doesn't exist. There are also no traditional classes, optimizing for certain builds is of course a thing (and for harder difficulties almost mandatory) but the sky is the limit with your imagination so long as you play within the confines of the system
Hope you enjoy the game, feel free to hit me up if you're new and would like someone to play with. Game plays just fine solo as well but games are always more fun with others. =)