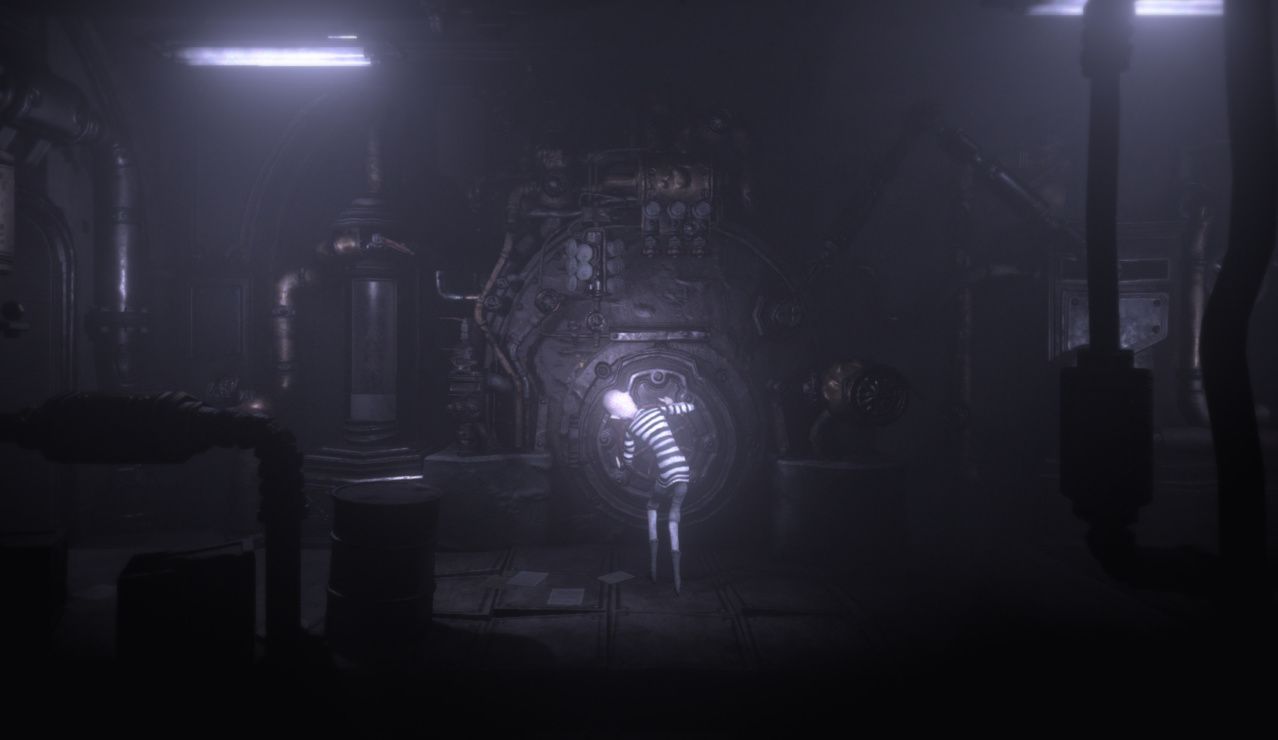 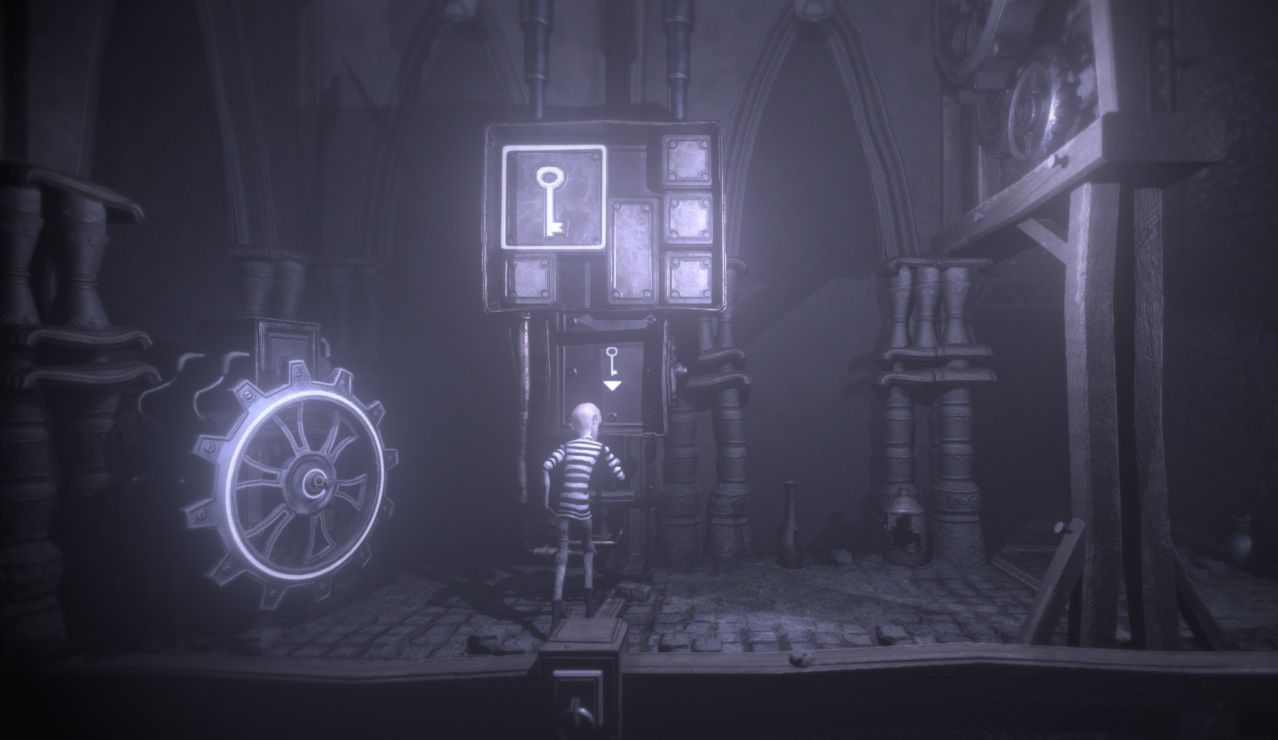 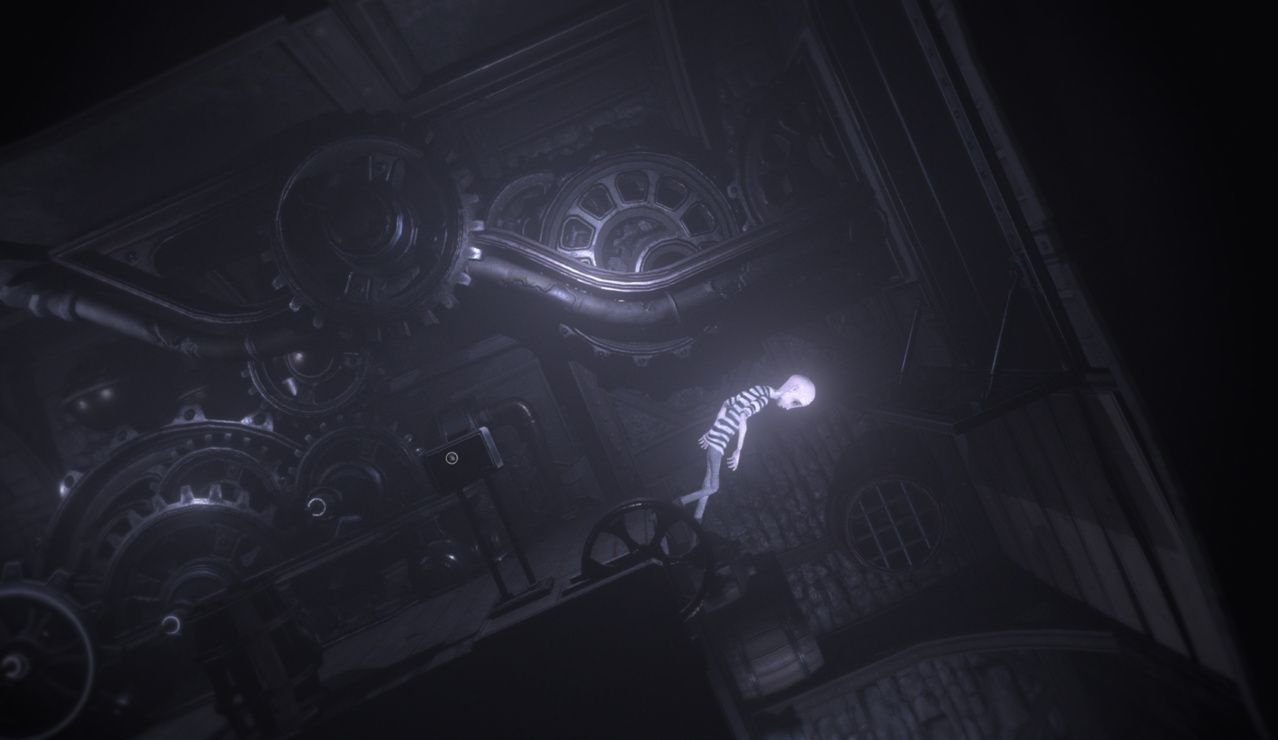 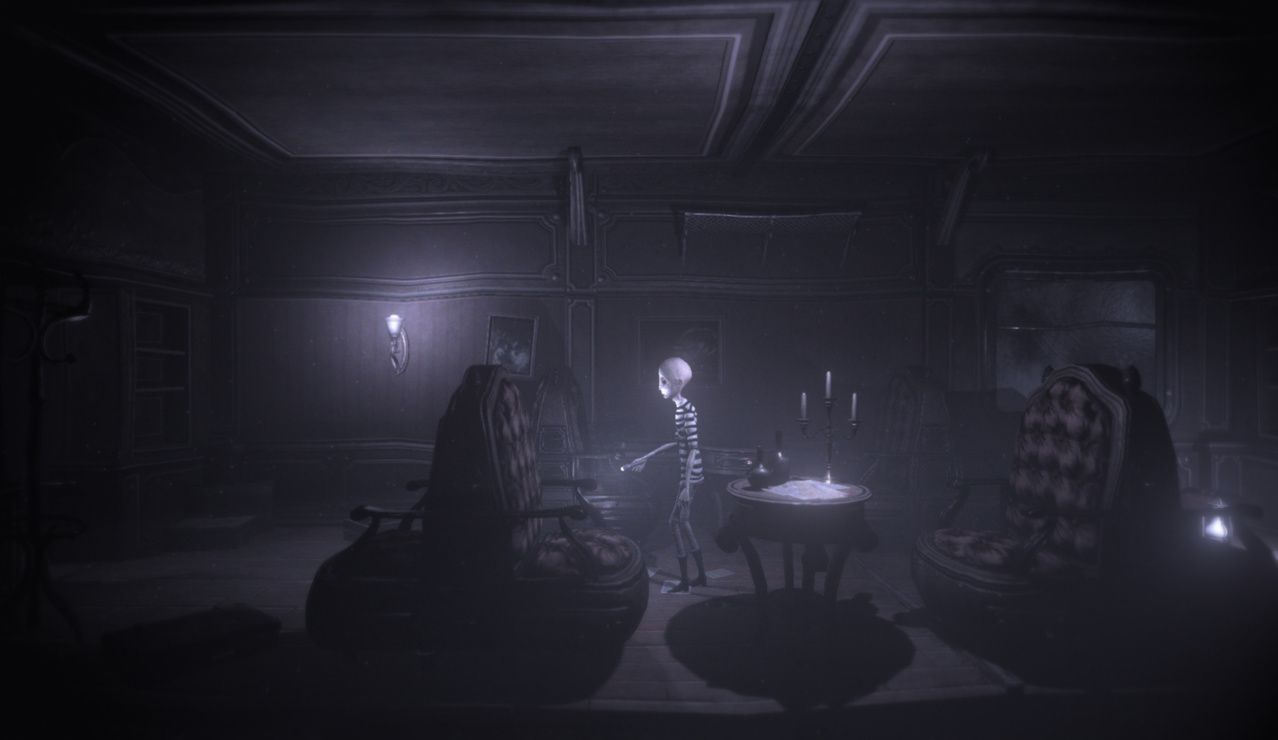 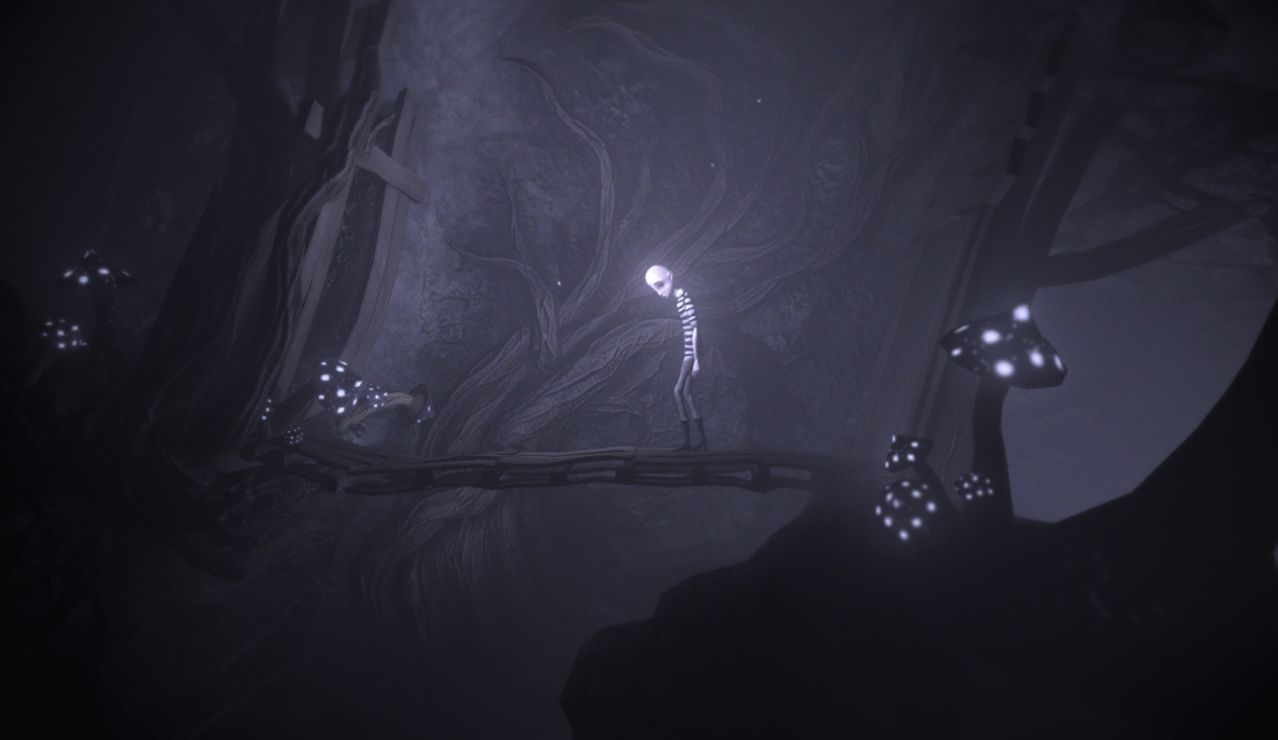 PC Steam action indie adventure puzzle horror psychological
DARQ tells the story of Lloyd, a boy who becomes aware of the fact that he is dreaming. To Lloyd's misfortune, the dream quickly turns into a nightmare and all attempts to wake up end in failure. While exploring the darkest corners of his subconscious, Lloyd learns how to survive the nightmare by bending the laws of physics and manipulating the fluid fabric of the dream world. Apart from gravity-defying puzzles, Lloyd will have to use stealth when nearby enemies. He has no chance of winning in an open confrontation, since the creatures he will encounter are much more powerful and faster than him. Instead, he has to rely on careful planning to avoid getting detected.
Share Share Share
Promote for 50G

Let me just start of by saying that this is the first game that the developer made and it was solo! He also REJECTED Epic Games exclusivity. This deserves respect.
You can learn more about this from a *video* made by Yong Yea - the person that is a naranator for the DARQ Developer Book.
ABOUT
The game is about a boy, named Loyd, that is lucid dreaming and experiencing horrible nightmares. He has to solve puzzles so he can get out of the scary dreams but eventually he returns to the same place anyways.
You can sort of control gravity and walk on walls and ceilings. This allows the game to create interesting ways to traverse the levels and that makes the level design a bit more intriguing.
The whole game is very strange, bizarre and it has this heavily inspired Tim Burton style.
------------------------------ GAMEPLAY
There is absolutely no main menu. You start right in game without any explaining and that pulls you right in and instantly immerses you. One flaw about this is that it does not mention any controls and you have to figure them out by yourself. Luckily the controls are pretty simple.
Puzzles were interesting, fairly easy and quickly understandable but they were nothing unique most of the time.
------------------------------ SOUNDS
Amazing ambient sound that builds up that creepy atmosphere and tension will make you completely oblivious to the fact that there is no actual music or soundtrack even tho the developer was a film composer.
The jumpscares are a bit too loud when they happen but that problem can be overlooked and also you can just turn the volume down.
I had some minor audio glitching issues right at the end of the game where the sounds were 'tearing' and they got overlapped and louder the further I went. Decided to mention that if anyone had the same problem.
------------------------------ DLCs
They are completely FREE! With the new one released not so long ago.
The Tower DLC is pretty good. With different new puzzles that were not used before. It was pretty fun. You can finish it pretty quickly tho and there is even an achievement for it called *The Tower Runner* where you have to finish it under 6 minutes.
Overall this DLC served as a thanks for people that supported the decision of rejecting Epic. It was also more morbid but less spooky then the base game.
The Crypt DLC came out recently (December 4th 2020) and I have to say that it's not bad. The teasers and the trailers kind of spoiled most of it (and also the end of The Tower) but it was enjoyable either way.
You can control your head at specific locations that you put your cut neck inside. The head can fit throught the holes in the wall that your body cannot so you are able to unlock some stuff and solve puzzles that way. It can also be more closer to the camera so that it can be on the side of the character. The catch is that when you are controlling the head you can't control the body.
I didn't quite like some of the puzzles but two specific jumpscares actually got me.
The lenght is almost the same as with the The Tower DLC - short. With that comes yet another achievement for beating it in under 12 minutes called *Crypt Runner*.
- The whole game with all the achievements is just under 5-7 hours long. Considering the decisions of the developer and how wholesome and great he is, I would pay full price if you want to support him. If you just want a quick game that you would enjoy and finish in one sitting then rather buy it on sale as it doesn't offer too much replay-ability.
It's getting DARQ now. Time for sleep.

DARQ is a really great puzzle platformer game.
Amazing creepy/horror atmosphere, innovative gravity-defying puzzles and gorgeous art direction.
Overall it's really well made, not sure yet but i think this game might be as good as INSIDE, so yeah good stuff.
A must have, easily recommended.
Rating 8.5/10.
Click here to follow my curator if this review was useful to you.

What It Is & How It Sounds
Right away I must warn you: don't expect Inside or Little Nightmares. Despite sharing some visual and thematic resemblance, DARQ is more of a puzzle-adventure with neat horror elements rather than a stealth-platformer. It has a small portion of the latter, but it's much less pronounced than everything else. There isn't even a dedicated jump button of any sort, it's all contextual. Which doesn't make the game less enjoyable, of course, just different. Meditative and feverish in concert.
Aside from the nightmarish visuals that speak for themselves, professionally made sound design is the game's second most prominent feature - all the lovingly made creaking, stepping, clanking, buzzing, grinding, and whispering are accentuated by the humming silence. Not having any music was a bold choice that, in my opinion, paid off big time by thickening the atmosphere and adding to the authenticity. Them dreams usually don't have an OST. Shut up, Mr. "but I'm so special, my dreams are so different".
How It Plays
DARQ is divided into tiny chapters, each stars a specific kind of gimmick, with the ability to walk on walls and ceilings being common to all of them. The puzzles are mostly easy, but also pleasantly inventive. What you do is solve space orientation puzzles, labyrinth puzzles, timing puzzles, move blocks, pull levers, partake in FREAKISHLY INTENSE PANIC-INDUCING predicaments, look for items to use on other items, and occasionally sneak past them monsters. Who are very reminiscent of Silent Hill, my holy cow, and while this kind of appropriation usually annoys me, I find the game worthy enough to get away with it.
Stealth is used cleverly to escalate tension and I personally don't see it as a cynical way to pad the game as some people say, I think that it was applied tastefully. I mean, yes, in concept, the goal was to slow the player down, it is padding by definition, but I argue against the allegation saying that it was implemented in some cynical and unacceptable manner. Look at it as the only way to plug in these sweet monstrosities, a fair trade-off. For the most part, the game's flow stays intact notwithstanding.
Do some puzzles end up feeling like busywork, because in a couple of scenarios you need to stealth back and forth through the same section repeatedly? They do, but let's face it - in the main game, backtracking through any of these miniature locations takes less than a minute, more like thirty seconds, and you don't have to do this often anyway. If your time is so precious that you get frustrated after "wasting" a minute of it during the course of this short game, then why even bother? Go back to your rocket engineering and brain surgery, your country needs you.
How It Fares
It took me two hours to beat the game without finding any of the optional "dream journals". Then I squeezed a little more content from the DLCs. Loved The Tower that has brought some Kronenberg flavor into the mix, and absolutely hated The Crypt, haven't finished it. But hey, the DLCs are free, so whatever. The game's price is steep for the length, so buy DARQ when it's heavily discounted, problem solved.
Keep in mind that Unfold Games rejected Epic's indecent yet lucrative proposal, which should earn them a ton of respect in the public eye. Too bad that it doesn't replace a ton of dough! But that was the price of being ethical at all times. Considering the number of reviews, they seem to be doing fine though. Which sets a great example: you can fling the CCP's money aside and be a successful indie developer at the same time.
My curator

This is an extraordinary game, one of a kind. The amount of detail put into this game is unreal. I initially bought this game to support the developer for saying no to EPIC money. Now that I'm more free and just finished playing this beautiful game. And u get a free DLC too!!!! I just want to end my terrible review by saying a big thank you to Unfold Games. :)
10/10 recommended

At first glance it’s just a 2.5D puzzle platformer. Early into the journey you’ll realize it takes the best from the genre and upgrades it significantly.
The puzzles are varied and innovative. There’s just the right amount of time-based tasks. The concept of defying gravity has been implemented in a very original way. This, of course, requires a quite high level of both spatial imagination and memory skills from the player. As a result, you’ll be coming back to the same places several times throughout the level to figure out where to go next. This is not a bad thing, because the world created in DARQ is breath-taking.
The grim, creepy, enticing visuals are as top-notch as the puzzles themselves. It clearly shows that the artists standing behind the environment creation and character modelling didn’t lack imagination nor skills. It’s so fulfilling just to look at it, let alone interact with it.
This brings us to the story behind the metaphor. I won’t spoil it for you. Just play it with headphones on, and take a close look at everything (and everyone) you see. The real meaning of what happens here is heart-breaking. It is also… uplifting.
Some would say the gameplay is a bit short for the money. It may be true, but DARQ is in the same league with LIMBO and INSIDE. I’m willing to pay more to relieve this kind of quality gameplay experience. Oh, and at least first two DLCs are free. 9/10