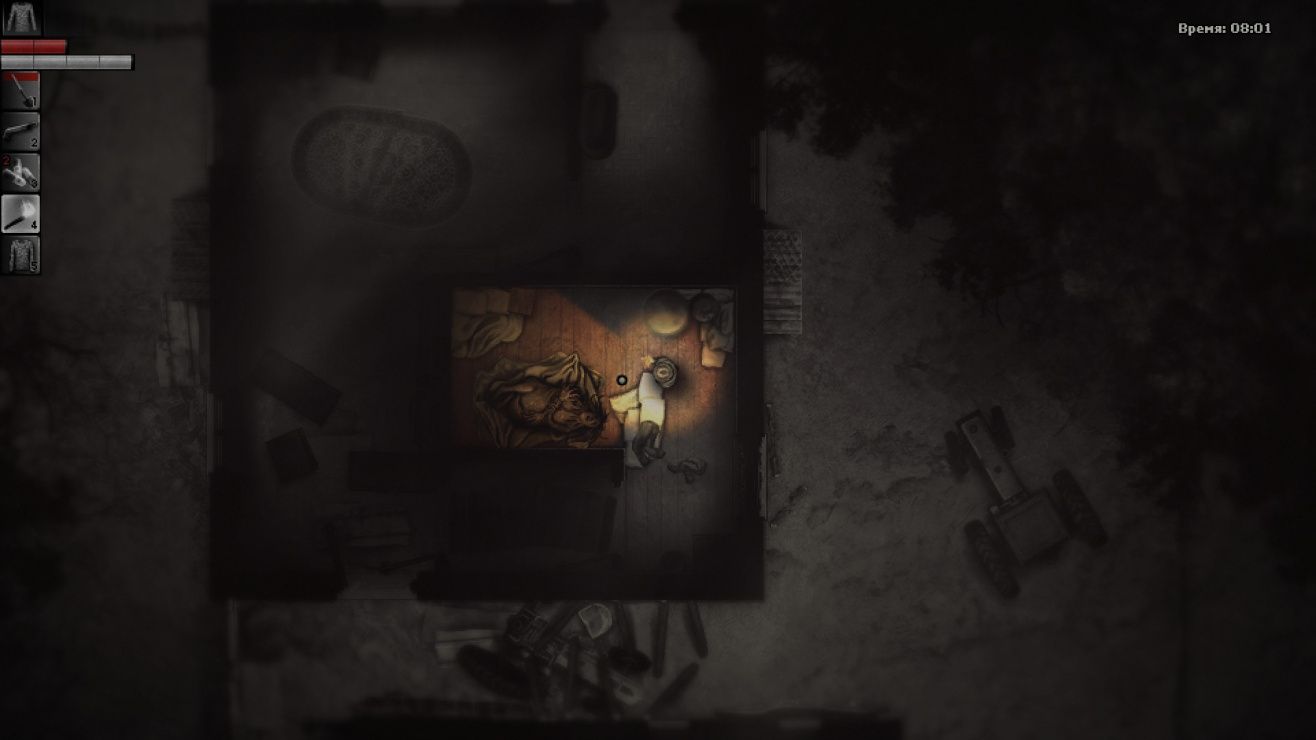 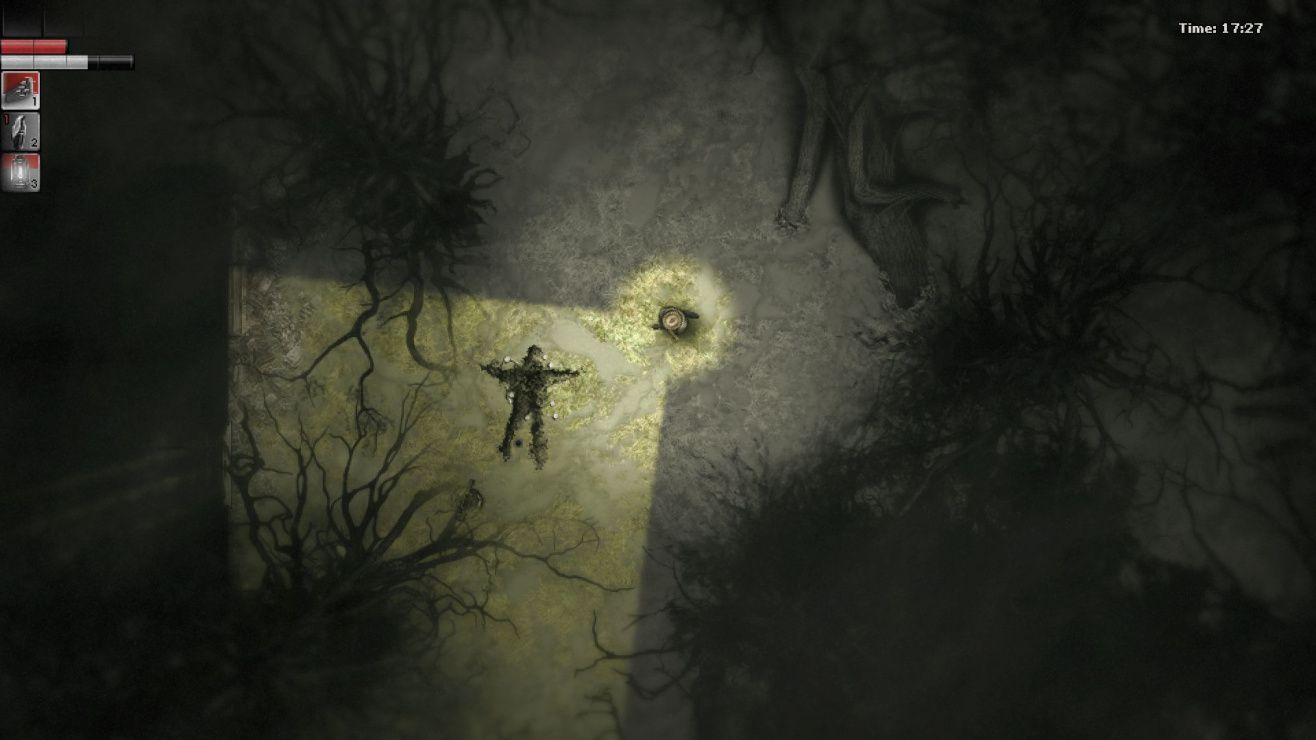 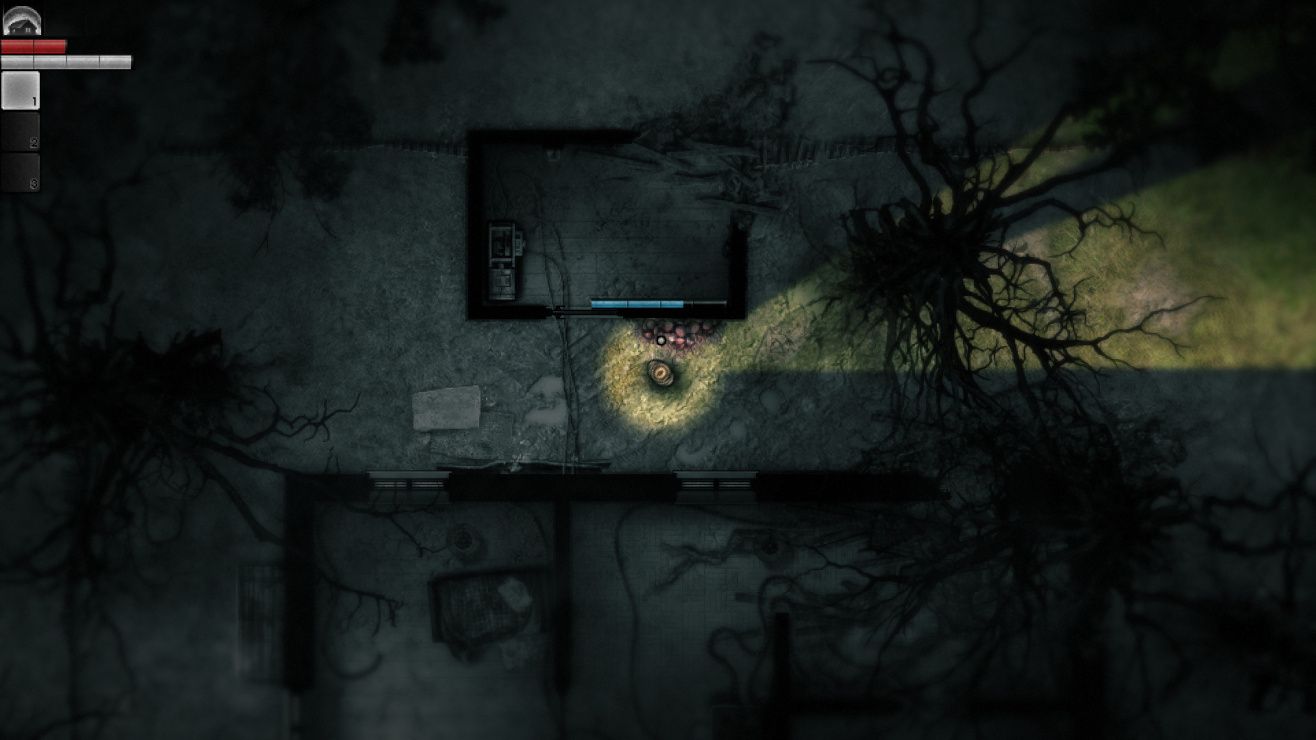 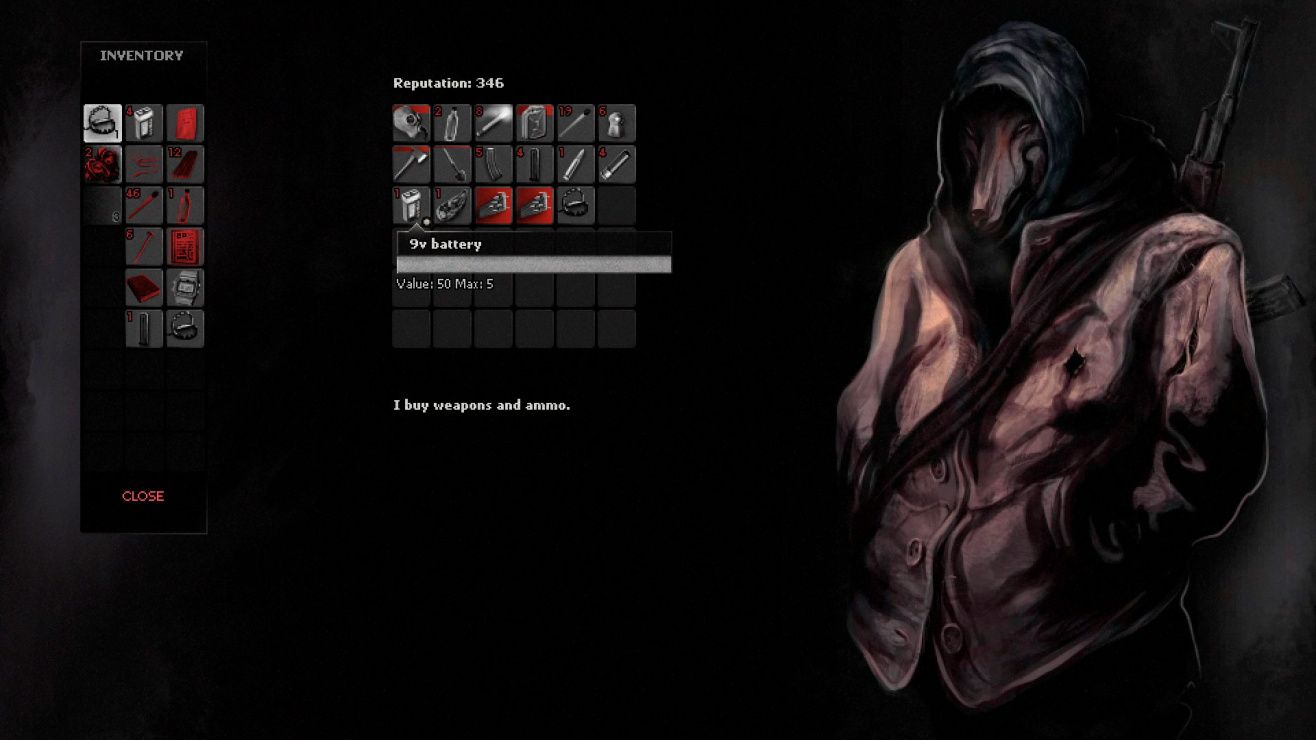 PC Steam Console Playstation Xbox indie Nintendo survival horror dark role-playing
Darkwood - a new perspective on survival horror. Scavenge and explore a rich, ever-changing free-roam world by day, then hunker down in your hideout and pray for the morning light. Survival horror from a top-down perspective that is terrifying to play. No hand holding or quest markers. Test your skills and figure things out on your own! By day explore the randomly generated, ever-sinister woods, scavenge for materials, craft weapons and discover new secrets. By night find shelter, barricade, set up traps and hide or defend yourself from the horrors that lurk in the dark. Gain skills and perks by extracting a strange essence from mutated fauna and flora and injecting it into your bloodstream. Watch out for unexpected consequences… Meet eerie characters, learn their stories and decide their fate. And remember - don’t trust anyone. As nights go by, the lines between reality and nightmarish fantasies begin to blur. Are you ready to step into Darkwood?
Share Share Share
Promote for 50G

---{Gameplay}---
🔳Try not to get addicted
🔳Very good
☑️Good
🔳Nothing special
🔳Ehh
🔳Bad
🔳Just dont
---{Graphics}---
🔳Masterpiece
🔳Beautiful
☑️Good
🔳Decent
🔳Will do
🔳Bad
🔳Awful
🔳Paint.exe
---{Audio}---
☑️Fascinating
🔳Very good
🔳Good
🔳Decent
🔳Not too bad
🔳Bad
🔳Earrape
---{Audience}---
🔳Kids
☑️Teens
☑️Adults
🔳Everyone
---{PC Requirements}---
🔳Check if you can run paint
☑️Potato
🔳Decent
🔳Fast
🔳Rich boi
🔳Ask NASA if they have a spare computer
---{Story}---
🔳Doesn't have
🔳Something isnt nothing I guess
🔳Not greatly told
🔳Average
🔳Good
☑️Will make you cry a lot
---{Playstyle}---
🔳Almost never the same in any two people
☑️Varies a little bit from person to person
🔳Weapon AND character classes
🔳Weapon OR character classes
🔳Creative AND Survival
☑️Creative OR Survival
☑️Melee AND Ranged
🔳Melee OR Ranged
---{Difficulity}---
🔳Just press a bunch of buttons
🔳Easy
🔳Significant brain usage
☑️Easy to learn / Hard to master
🔳Not so easy
🔳Difficult
☑️Dark Souls
---{Grind}---
🔳Nothing
🔳Only if you care about leaderboards/ranks
☑️Isnt necessary to progress
🔳A bit grindy sometimes
🔳Average grind level
🔳A bit grindy
🔳Insanity
---{Game Time}---
🔳Long enough for a cup of tea
🔳Short
🔳Average
🔳Long
☑️Depends on you
🔳Endless
---{Price}---
🔳Just buy it
☑️Worth the price
🔳Wait for sale
🔳Maybe if you have some spare money left
🔳Not recommended
🔳Dont throw money into a rubbish bin
---{Micro-Transactions}---
🔳EA
🔳Mobile Game(Necessary if you don’t want to wait 15 weeks to construct a toaster)
🔳”Premium” Currency AND Normal Currency
🔳”Premium” Currency OR Normal Currency
🔳Quick way to advance
🔳Fortnite(Skins/Emotes/Etc)
🔳Only to show off big time
🔳Level DLC
☑️None
---{Bugs/Glitches}---
☑️Never had any
🔳Minor bugs/glitches
🔳Few bugs/glitches
🔳Can get annoying
🔳Ruining the game
🔳The game itself is a big terrarium for bugs/glitches
---{?/10}---
🔳1
🔳2
🔳3
🔳4
🔳5
🔳6
🔳7
🔳8
🔳9
☑️10
I don't play horror games often but I really liked this one.

By far one of the BEST games I've ever played. Atmosphere, artwork, storyline, audio/music and gameplay, it all comes together in an intriguing horror game that will keep you on your toes for the entire duration of the game (and makes you craving for more!). This game will test your wit and you sanity, both at the same time. The gameplay is hard, provisions are scarse and you really have to think about what items you'll use and when. The story is also expertly written. The level of fascinating detail they've put into the story is right next to the quality and madness you'd find in a Lovecraft novel. The music and sound effects only add to this, and the eerie sounds of the woods are only interrupted by the excellent music score that accompanies this game. If you like horror, hard and unforgiving gameplay combined with an amazing storyline, buy and try this game.

As a horror enthusiast, let me tell you why Sound Design is one of the most underrated features that makes a game so captivating if it's done extremely well. Darkwood exploits your sense of paranoia like no other, as its effective in delivering that sense of dread and suspense to extreme lengths due to its astounding sounds mix and dry visual presentation.
It employs one of the best types of horror, the fear of the unknown. My personal reason of why the fear of the unknown is the epitome of horror, is that the worst fear you can experience is the one that you can't see. Your mind, if placed in the state of constant pressure and anxiety, is capable of creating one of the most horrific interpretations of the unknown, and this game exploits that profoundly.
Overview
The story of this game takes place in a polish supernatural forest, as you are tasked to escape its macabre environment. The storytelling is very enticing, as it's vague and often morally open ended, as you encounter various amount of people affected by the mystifying effects of the forest, with a foreboding lovecraftian theme mixed with folklore.
There are absolutely no jumpscares, save for a few minor startles, as the horror is very often delivered in a subtle manner. The atmosphere itself is the horror, the bleak and dreary colors of the forest will never allow you to experience any sense of comfort and it will remain constant throughout the entire game. There's very little information that this game provides regarding its survival mechanics and combat. You will be left figuring stuff out by yourself without any tutorials or tips.
One aspect worth mentioning is that its polish developers Acid Wizard Studios understood that some might not always have funds to afford to play games, which prompted them to officially upload a DRM-Free version of the game for users to pirate it, conveying to people that if they like the game, they could consider buying it even at a discount (which it is right now as of Dec 24th 2020 during the Steam Winter Sale, at 4,75€, an absolute steal). While i do not condone piracy, i appreciate this gesture from the devs, which made me buy their game more so because of this.
Gameplay
It's a top down survival horror with minimal roguelite elements (such as randomized starting layout on every run). The movement and peripheral vision of your character are intentionally restrictive and clunky in order to accentuate the apprehensive feeling as you traverse throughout the forest. The survival elements rely on scavenging for resources and upgrades for your tools and weapons during the day, with a very minimal inventory space that encourages a conservative approach in a forest filled with traps.
During the night however, is where the game presents its best horror features, as you will need to survive the unknown monstrosities that lurk around your house. You will have to battle not only the physical encounters, but also the psychological ones, with increased difficulty and intensity with each hideout.
The combat can take a bit to get used to, as it's slow and there's a certain timing you have to gain in order to properly handle yourself with your melee weapons. Each enemy has a certain pattern and range you can exploit with tactical maneuvering, and you will need to get accustomed in melee throughout the entire game as ranged weaponry is incredibly scarce, used mostly in emergency situations or against the more trickier encounters later in the game.
The NPC's are very intriguing. You will often have to make choices between the quests you follow, as any of your choices will be met with its inevitable consequences directly after, or later throughout the game.
In terms of difficulty, you will die quite often, albeit it depends on your level of awareness and attentiveness. My recommended difficulty is on hard if you're more accustomed to survival games like i am, as you will start with 4 lives and can get a couple more along the way. Having a limited amount of lives forces you to play the game in a very cautious manner, which further accentuates the uneasy atmosphere it portrays, giving you the full experience the game intends to have. Dying in this game is quite inconsequential on normal difficulty, as you have infinite lives, and dying merely deducts a small amount of your currency you need to buy resources, and it will also drop a couple of your items on your place of death, requiring you to get them back. However, making too many mistakes and losing all your lives on harder difficulties, prompting you to restart the game, might compromise your experience and your momentum by having you repeat it again from the start, so playing on a safer difficulty will at least keep the momentum going without worrying about you lives. There is no right opinion on what difficulty you should play, only the difficulty you think it suits you the best.
The game was very replayable for me. Took me about 20 hours to finish it, and i replayed it about 3 more times for achievements and other quest lines. Its randomized starting map and hideout layout helps a lot with the replayability.
Conclusion
Overall Darkwood might be niche in terms of its genre and gameplay. It's not for everyone, many might not like its top down perspective, the lack of information might be off putting for others, and some might not enjoy its relatively unforgiving difficulty. For those willing to try a survival horror challenge, this game, save for a few tedious inconveniences on some items, delivers in every aspect, from its incredible eerie atmosphere full of dread and replayable gameplay, to its stellar sound design taking advantage of your fear of the unknown, making it one of my favorite horror games i've ever played.

Incredible game.
If on sale, wait for it to pass and buy at full price.

>Night 1
>Windows and most doors boarded up
>Turn on my generator
>Sit in the corner in a room with 3 lamps and wait
>Half the night passes with nothing but a few sounds in outside in the darkness
>When all of a sudden, the door into the room creaks open
>House begins to shake
>Lights go start flickering
>Furniture starts moving around like Micheal J. Fox and drifting toward the middle of the room
>Door SLAMS shut
>Next morning hits
>Get up from my pc and go to the fridge
>Take a swig of vodka
11/10 spooks, bois
...the nights only get tougher.

A great educational game on how to survive in Poland as an exchange student.