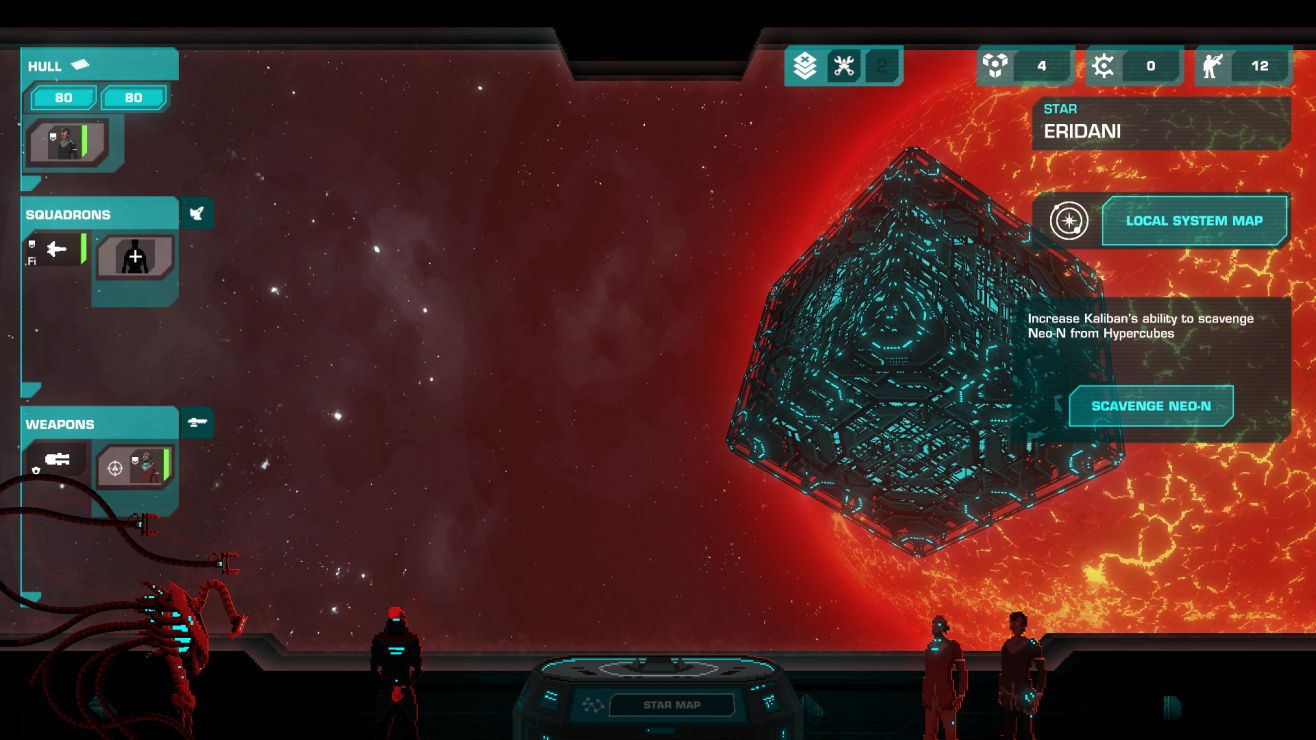 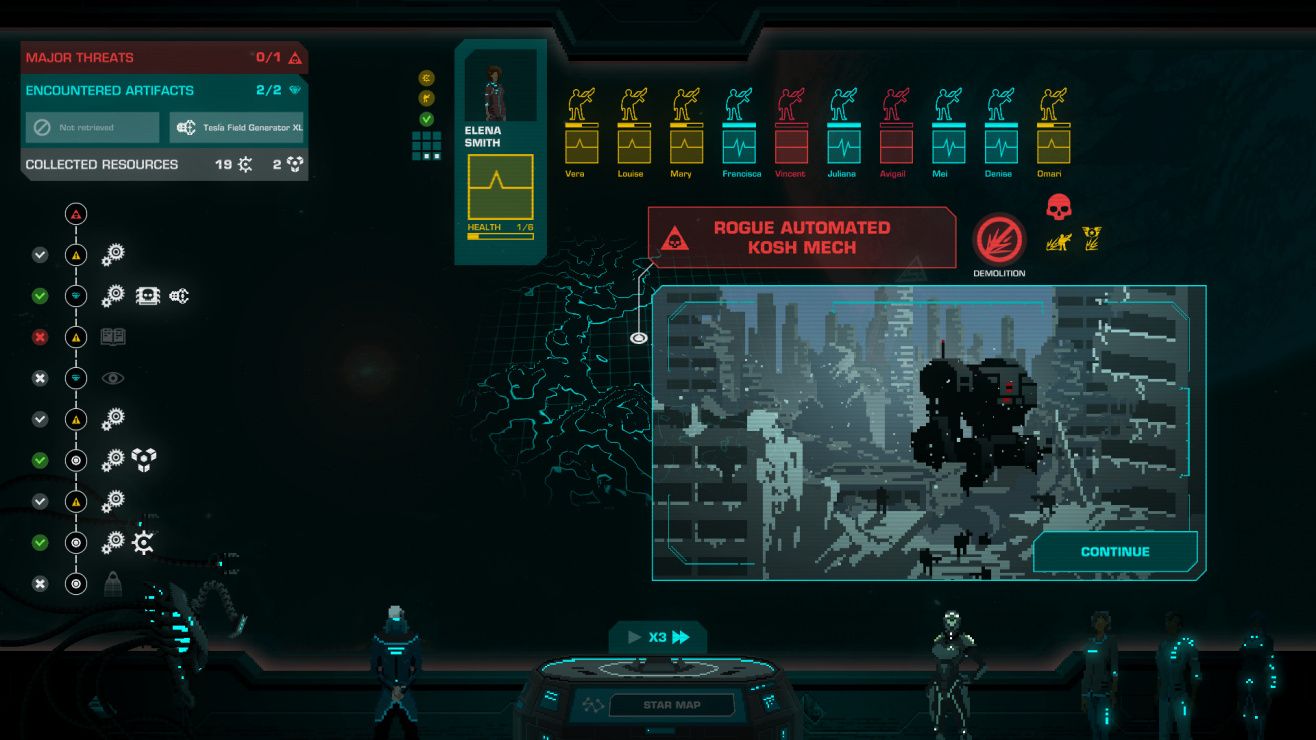 PC Steam indie strategy sci-fi dark space drama rogue-lite
Crying Suns is a tactical rogue-lite that puts you in the role of a space fleet commander as you explore a mysteriously fallen empire. In this story rich experience inspired by Dune and Foundation, each successful run will uncover the truth about the Empire... and yourself as well. Main Features - Space exploration in a procedurally-generated universe - Tactical fights between battleships and their squadron fleets - More than 300 possible story events - A deep and dramatic storyline structured in 6 chapters - A dark and disturbing atmosphere inspired by our favorite S-F universes (Foundation, Dune, Battlestar Galactica) Prepare to die often, it's a rogue-lite game... And it's a hard one…
Share Share Share
Promote for 50G

Story driven FTL with more of a focus on grid based fighter combat than just battleship to battleship combat. Really cool art, great music, good story, and really engaging gameplay.
Warning - it has that just one more turn problem. Sat down to play for an hour the first night and got really bothered when the sun came up and ruined the ambiance with the glare and chirping birds. 11/10, would time travel again.

Good Game, like FTL but every battle is a small RTS instead of a ship battle. There is a lot of stuff to do already and they are still rolling out new features. If the idea of an FTL sequel sounds appealing and you like games that have you ordering units around, this is the game for you.

This game is billed as a roguelike, but is not really fun if you play it as one. There is one continuous story across the chapters, and the random elements are not varied or interesting enough to make it worth going back and replaying a chapter you've already beaten.
But, the story is interesting enough to be worth playing through, and the mechanics are interesting enough to last the whole story without getting too repetitive. Thumbs up if you get it on sale.

Crying Suns is a combination of two genres, rpg & roguelike. Unfortunately the way that it is set up it doesn't succeed. The game has six chapters, each of which is a 2-2.5 hour run spanning three levels resetting you to starting gear upon completion, which, while odd, is fine because it's a roguelike.
Now the game should have been split into a campaign mode and a sandbox mode, which it sort of is since once you finish all six chapters you unlock the chapter selection mode of play. That said the game is very difficult on normal (there is an easy & hard difficulty as well) and if you get stuck on a chapter you have to replay it over and over again until you beat it. There's no going back to previous chapters for a change of pace...until you beat the game. Thankfully the game is a breeze on easy difficulty, which is why ultimately I would recommend the game.
My recommendation for the first play through is to set it to easy and enjoy the story, unlock all of the ships/unique officers, experiment with all of the different squadrons, weapons, and optional quests and beat the game. Then if you like difficult games/roguelikes/rts the fun truly begins with the chapter selection mode.
Other pros:
-The game is gorgeous.
-While very minimalist I found the planetary expeditions to be very well done. Honestly might be one of my favourite parts of the game.
-The rts battles on normal/hard difficulty are quite challenging.
-The game runs beautifully. No crashes or lag spikes in sight!
Other cons:
-There aren't nearly enough events in the game. Expect seeing duplicates around the 4-6 hour mark.
-While I do find the chapter selection mode the best way to play the game it does feel a bit janky. The chapter boss is always the same, you're also forced to go through the story dialogue as well. A proper sandbox mode with random bosses ignoring the story entirely would have been so much better.
A final note on how roguelike the game is.
In a word...very. I play TOME & DCSS and this game ranks up there in terms of difficulty even with its length. The squadrons/weapons you get are very RNG dependent, and you can easily run into an encounter that counters your build one or two moves before the chapter boss effectively crippling you and leaving you with no chance of beating it.

Very similar to FTL, but perhaps not quite as good. Being an inferior title to FTL is not exactly an insult. While Crying Suns does not have the same mind-blowing pool of diverse events, nor the same replayability, nor the same simple game play charm, it still comes to the table with a very polished and fun experience that echoes FTL's legend.
The game play is a little more complex than deep, but it's fun. I've seen complaints about the narrative, but I thought it was engaging and well-written, with lots of respect paid to Isaac Asimov and Frank Herbert. You will start to see the same events after a few chapters, but the pool itself is still pretty impressive and almost all of them are well-crafted and interesting.
My suggestion is that you'll get out of Crying Suns a very similar exprience to FTL for one play through. It will be more engaging in some ways and less engaging in others. What it won't give you is 200 hours of replayability, but I think that is OK! Recommended.