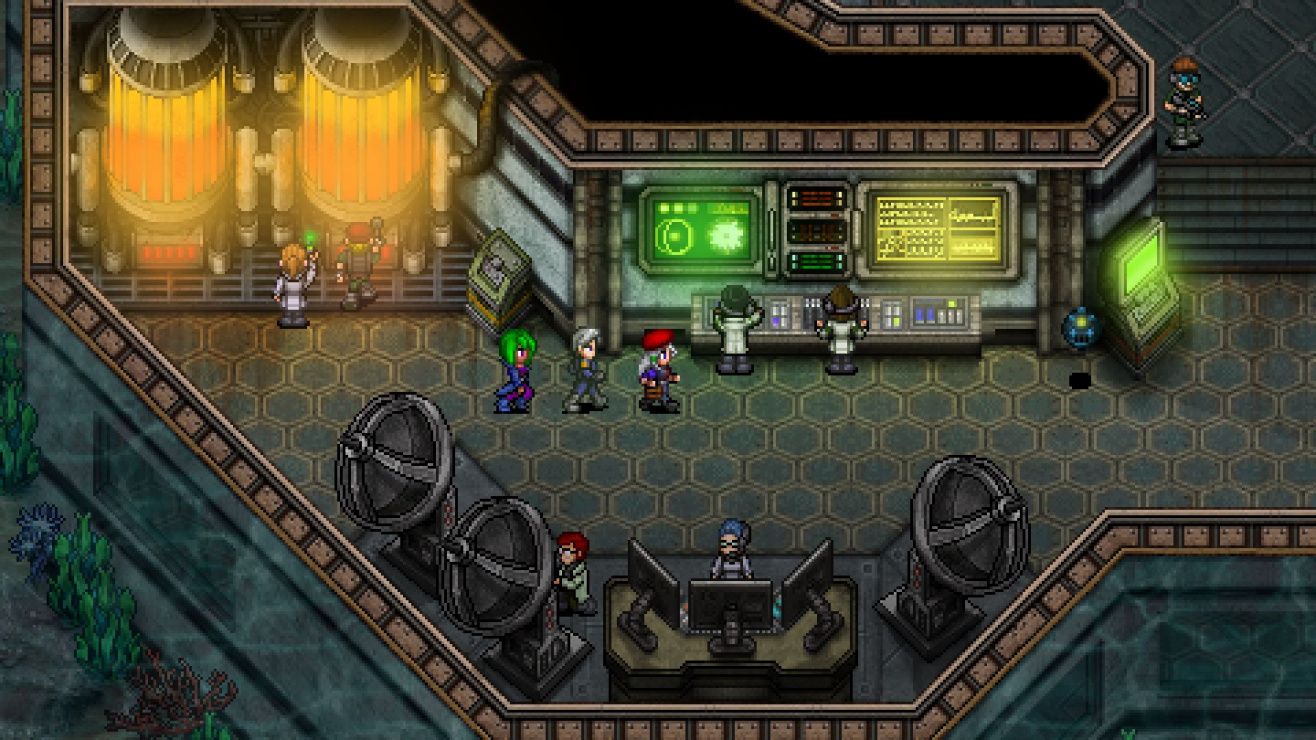 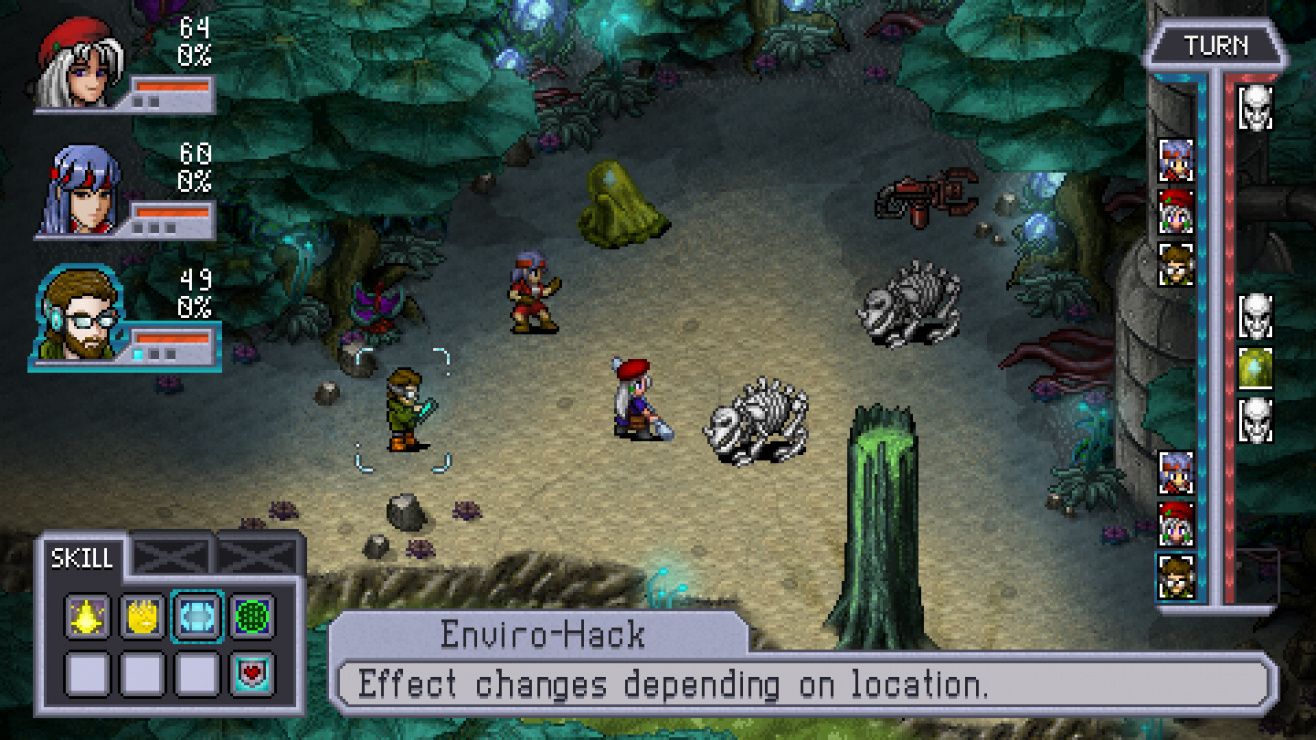 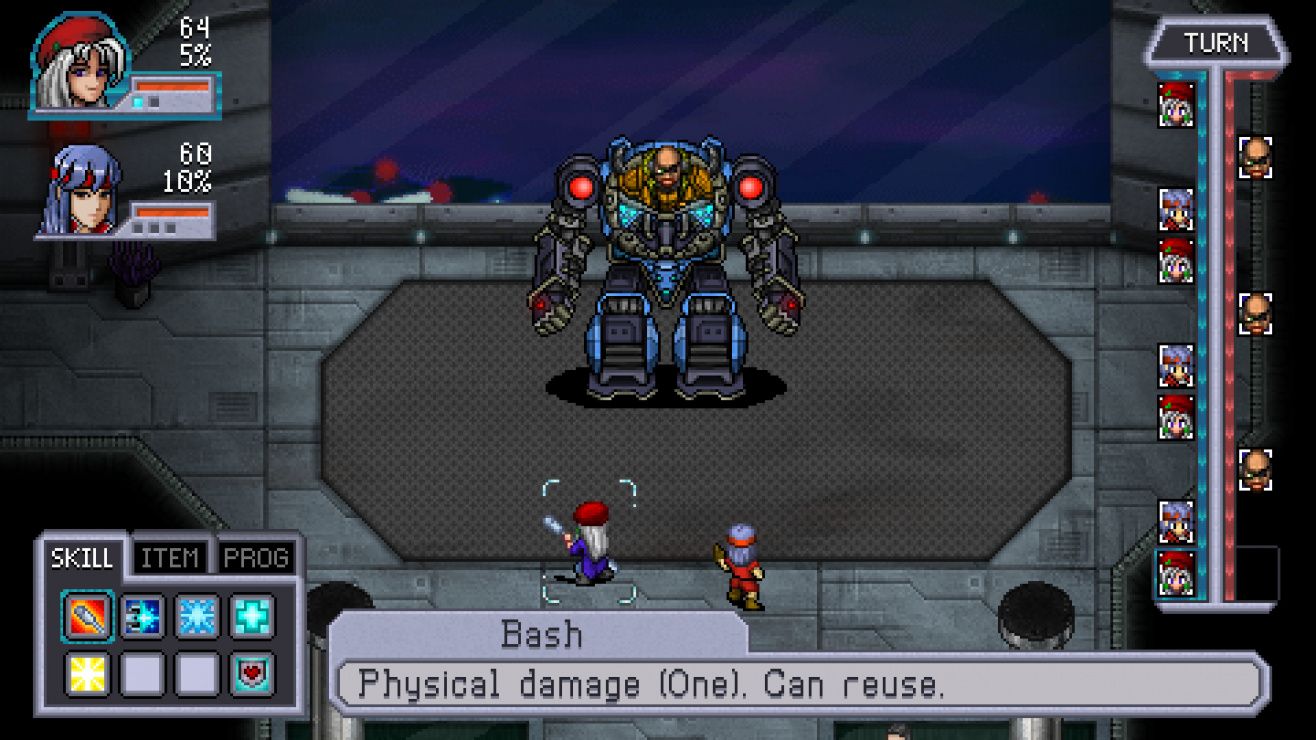 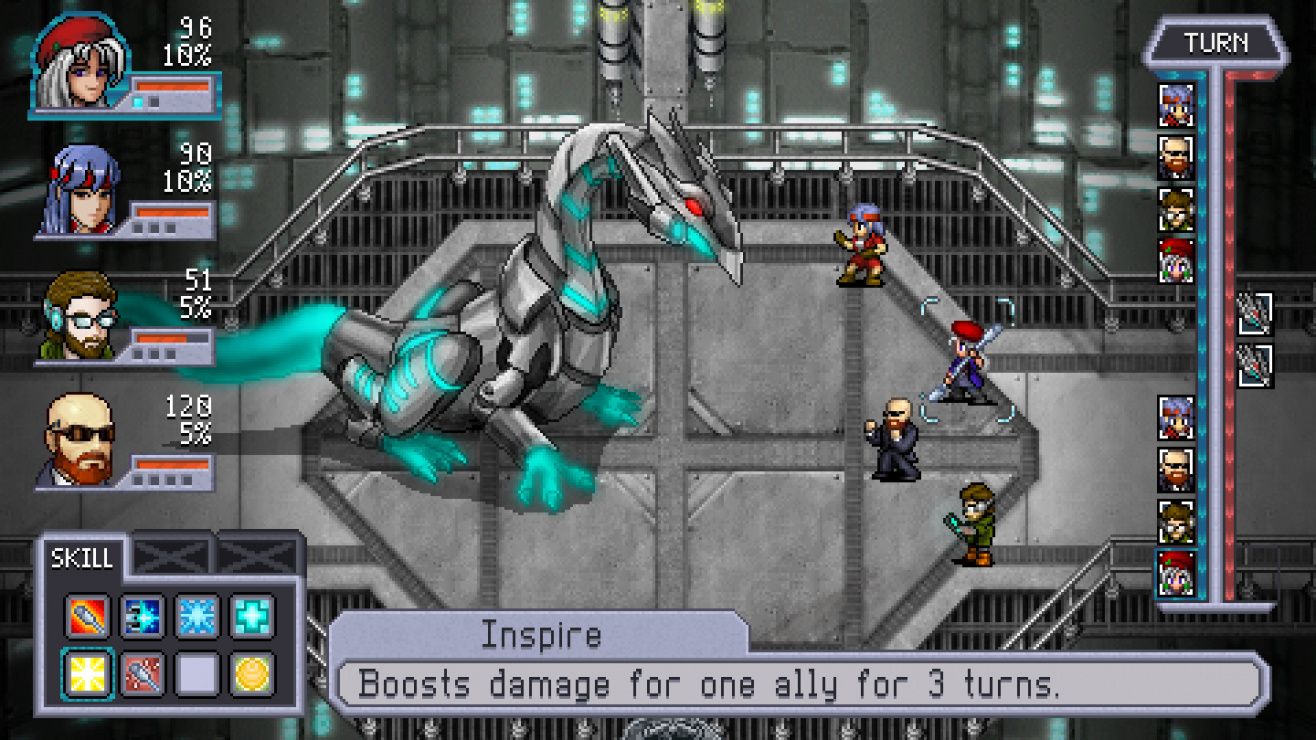 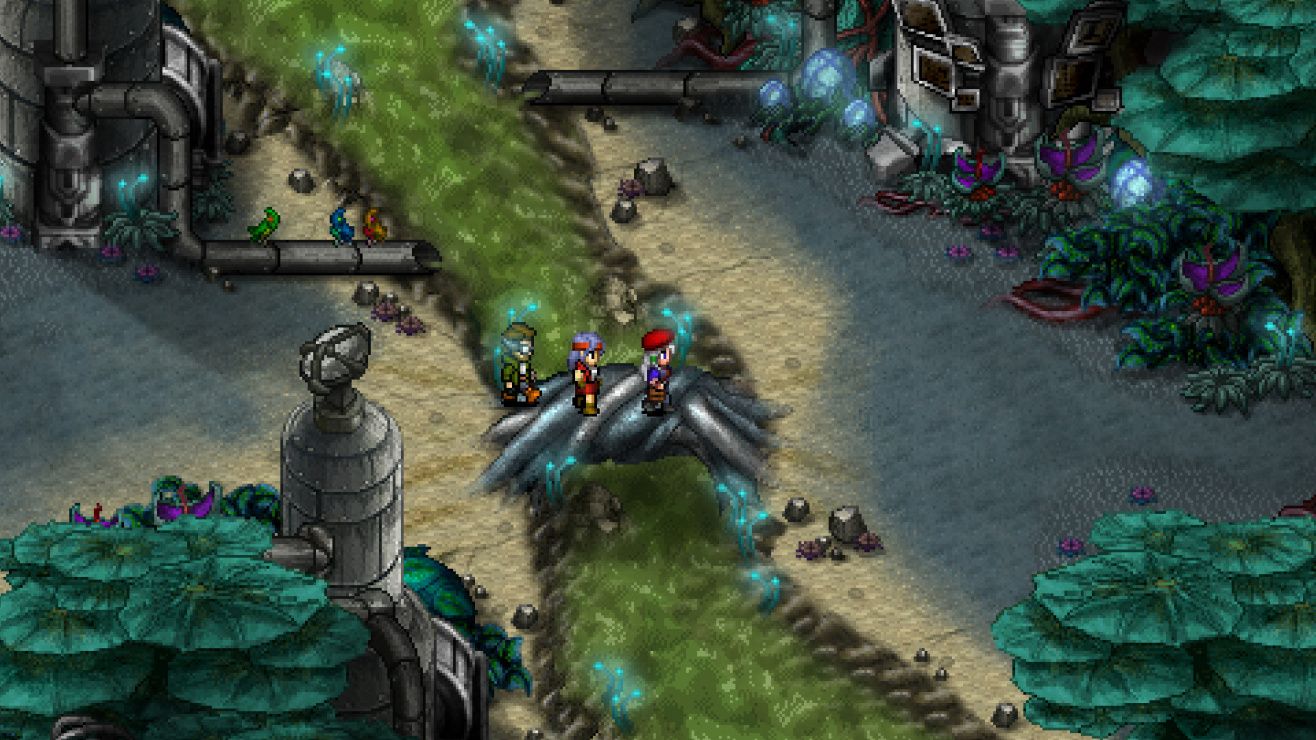 2d classic galaxy indie pixel retro role-playing rpg sci-fi
Alyssa L'Salle was one of the top secret agents at the Agency of Peace & Intelligence on the Planet Araenu. But when she uncovers a horrible conspiracy, she has to go rogue in order to save the day! Can Alyssa save the galaxy when everyone (and everything) is out to stop her! Features: The best of classic and modern RPGs! Brisk pacing that respects your time! Save anywhere! No separate battle screen! Battles take place directly in the areas that you explore! 2D visual style straight from the height of gaming's 16-bit era! Animated cutscenes reminiscent of the Sega CD & Turbo Duo era! Soundtrack by HyperDuck SoundWorks (Dust: An Elysian Tail, Precipice of Darkness 4)! Over 100 minutes of music! Multi-character combo techniques! Innovative turn-based combat system that focuses on flow & strategy! Your own spaceship! Recruit new agents to help your home base grow!
Share Share Share
Promote for 50G

Cosmic Star Heroine is, without a doubt, a great RPG reminiscent of the classic JRPGs I used to play as a kid, and it still manages to feel fresh in its own way, with a great cast of characters and many interesting locations.
The story is set in the Zevanii system, a planetary system in the far distant future, in which the different planets maintain a relative peace. You start playing as Alyssa L'Salle, an agent for the Agency of Peace and Intelligence (API), from the human planet of Araenu. After what seems to be an ordinary mission against the terrorist organization known as Astraea, you and your friends discover a conspiracy that threatens the whole system, and it's up to Alyssa and her team to stop it.
As the story progresses, you'll get to travel to other two planets from the system. The first of them, Rhomu, suffered a heavy bombardent of biological weapons long ago, making the surface inhospitable for humans, who built cities in the underground; however, the Scimerex, friendly bug-like creatures, thrived on the surface, building their Hive on it. Then there's Nuluup, a planet of human-like creatures, who after their first death, live on in robotic suits controlled by their souls.
The gameplay is turn-based; you get to build a team of four characters, with Alyssa always being the leader, and one support character. Each character has their own abilities, though you can also use items you find, and programs, which depend on your character's shield. As with any JRPG, you get to buy new weapons and shields from stores found in the different planets.
The art style reminds me of classic 16-bit games, even though it manages to feel fresh and modern on its own way. All main characters (and several side charactersdtra) are recognizable from each other, and the interactions you can have are pretty good; from simple lines of funny dialogues, to sidequests that can give you great rewards. The soundtrack is another great point, full of catchy tunes, and while there is practically no spoken dialogue throughout the game, Laura Shigihara provides the vocals for Lauren's song (Lauren being one of the characters that joins you in your quest); a great song I might add.
Personally, I had a lot of fun with this game, and I can easily recommend it.

Honestly this game does so many little things wrong and yet I did actually enjoy it and want to finish it. Firstly, the music is fantastic, the combat music will play in your head for a while after playing and that's good because you're going to hear it ALOT. Which is good because the plot and characters are just plain stale, there's a few good bits here and there but overall underdeveloped characters are the norm here. Still though the combat will keep you coming back, it has two great gimmicks that work well together. Being only able to use abilities once and having to recharge them by defending when you decide; and having special/critical attacks on a predictable timer makes for some good puzzle like combat trying to get everything timed up for the perfect attack.
TL;DR recommended for the combat and music, not for the plot and characters.

That's "heroine" with an "e" on the end, by the way. Although in this case I could understand the confusion.
I heard a lot of people comparing this to Chrono Trigger, which is what made me want to play it in the first place. You never know with these things, but it turns out that really is a good comparison.

Even on the surface you can see the similarities. Same look. Basically the same turn-based battle system. The little pixelly characters march around in single file just like Crono & Company and unite for the same sort of combo attacks. Chrono Trigger had a fantasy/time travel plot, whereas this is more sci-fi, with aliens, spaceships and all that, but in many ways it's the same sort of story. That's probably the most impressive part.
I can't think of another RPG in the last 25 years that managed to nail the Chrono Trigger vibe quite so well. It's light-hearted overall, but not so silly that it breaks the immersion and makes playing it feel meaningless. It has its dark moments, but never too much. The characters have their distinct quirks, but it's not that cloying, forced quirkiness that some games have. They always maintain a can-do sort of attitude that keeps your spirits high. Of course you know the good guys are going to win in something like this, but you'll still want to stick around to find out how.
It's all wrapped in a compact (that's a nice way of saying short), well-paced experience. In fact, they really go the extra mile with the design. You know all those things that we've just come to tolerate as an unalterable part of the landscape in RPGs like this?

Things like items piling up in your inventory that you don't want to use because you never know if you'll need them later, and then you just binge like a madman on the last boss. Or having a whole bunch of spells that you keep on the shelf in order to conserve mana. Or most of your team being useless because there are a couple of characters that are obviously the best, and so you just ride them to victory? Or battles turning into a drag because you're forced to play extra-conservatively in order to manage your health between save points?
They're like that stack of old junk that sits in your basement, and every time you walk past it you think you really ought to clean it up but you never do. These guys probably could have just phoned it in and got away with ignoring it too, but instead they actually sat down and took the time to rethink some of this stuff.

Generally what they do is tone down the the logistics side of things so you don't have to manage items, health or mana like they're resources. For example, items aren't treated as consumables, but rather once-per-battle abilities that you can equip and use as the situation dictates. It's really kind of nice. You get to focus completely on the battle in front of you instead of worrying more about the next one.

That sort of streamlining might not be appropriate for every game, but in an upbeat, breezy little adventure like this it really fits. The smile on your face as the credits roll will tell you everything you need to know. It's too bad there's not a New Game + mode like Chrono Trigger's. This is one of the rare games where I actually might have used it.
Oh, and if you've read this whole thing and you still don't know what Chrono Trigger is and you're wondering why I'm talking about it so much, go play that, too. You'll thank me.
You can find more indie game reviews at oddlittlegames.com or visit my curator page. Thanks, and enjoy!