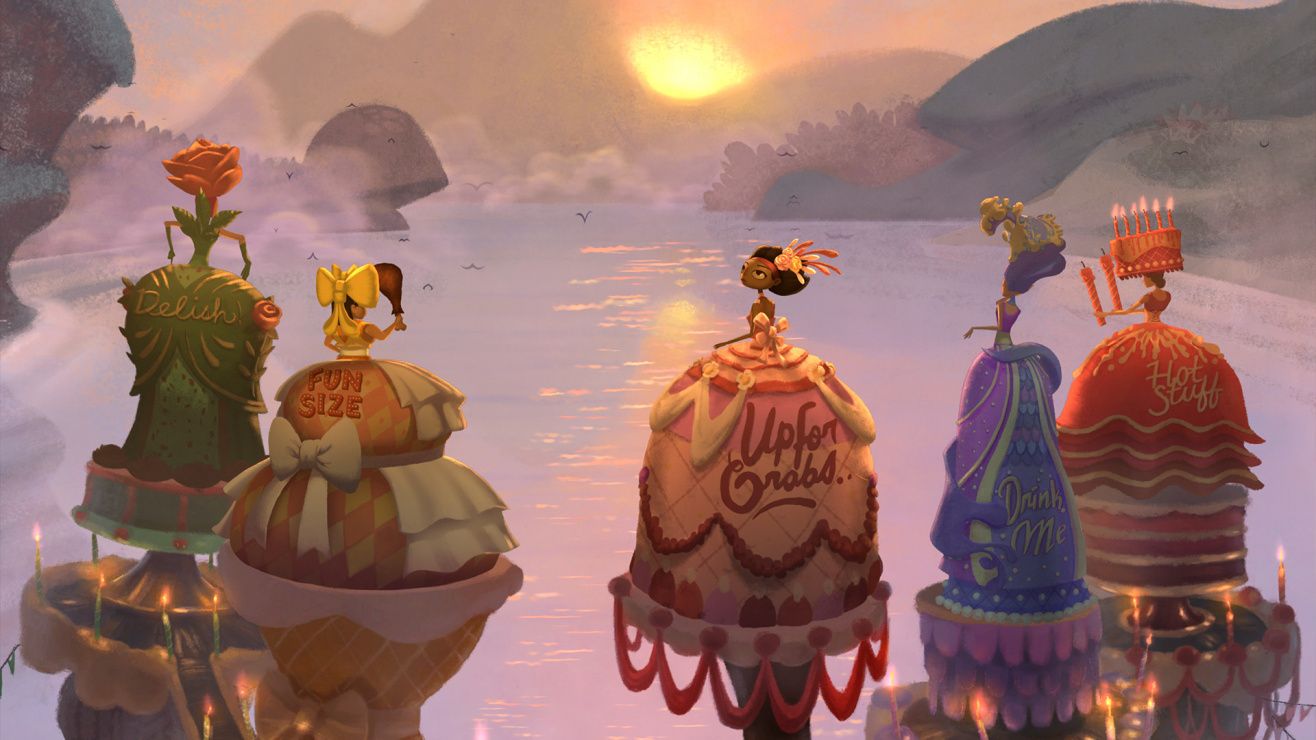 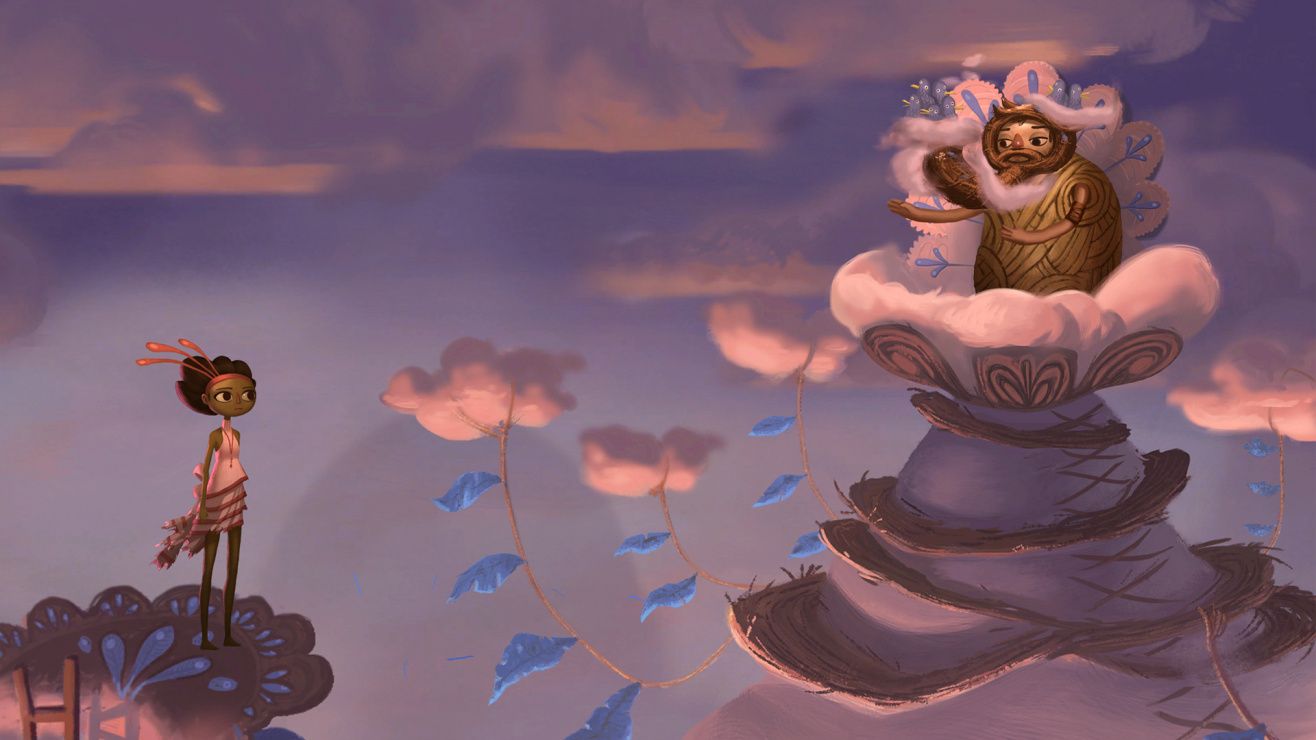 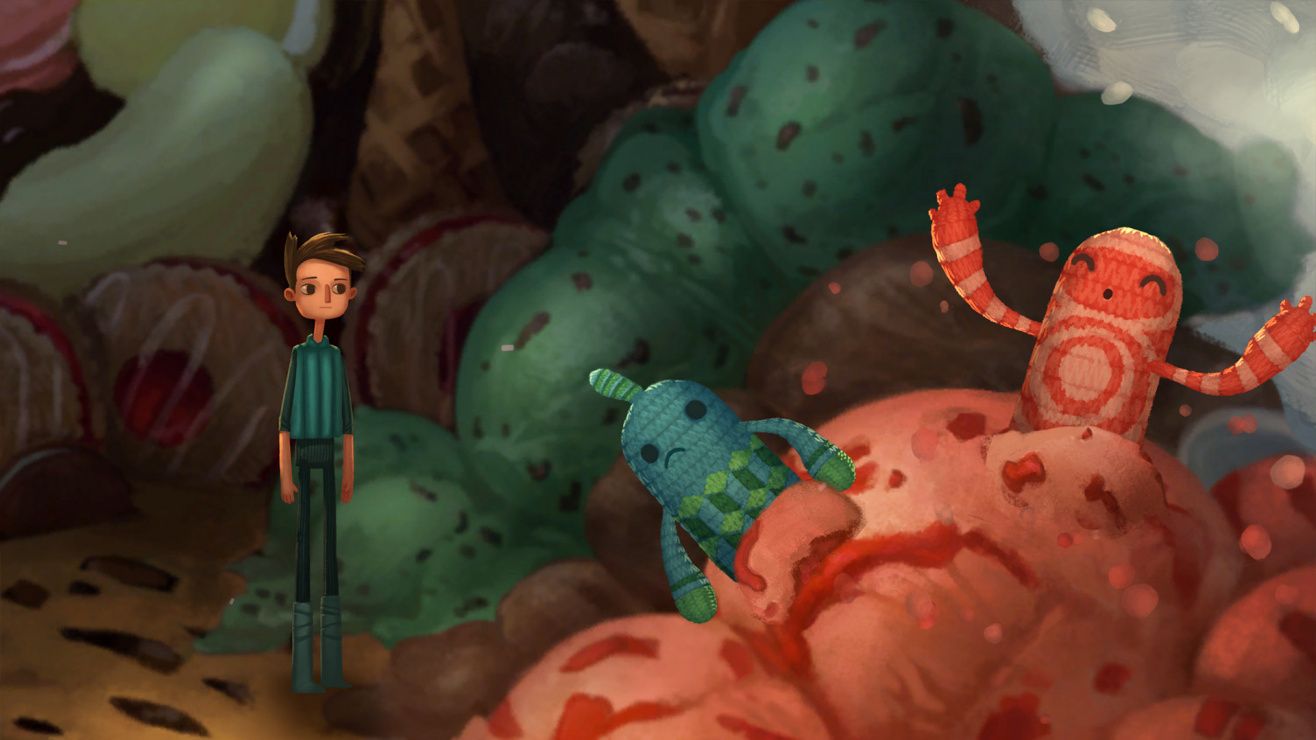 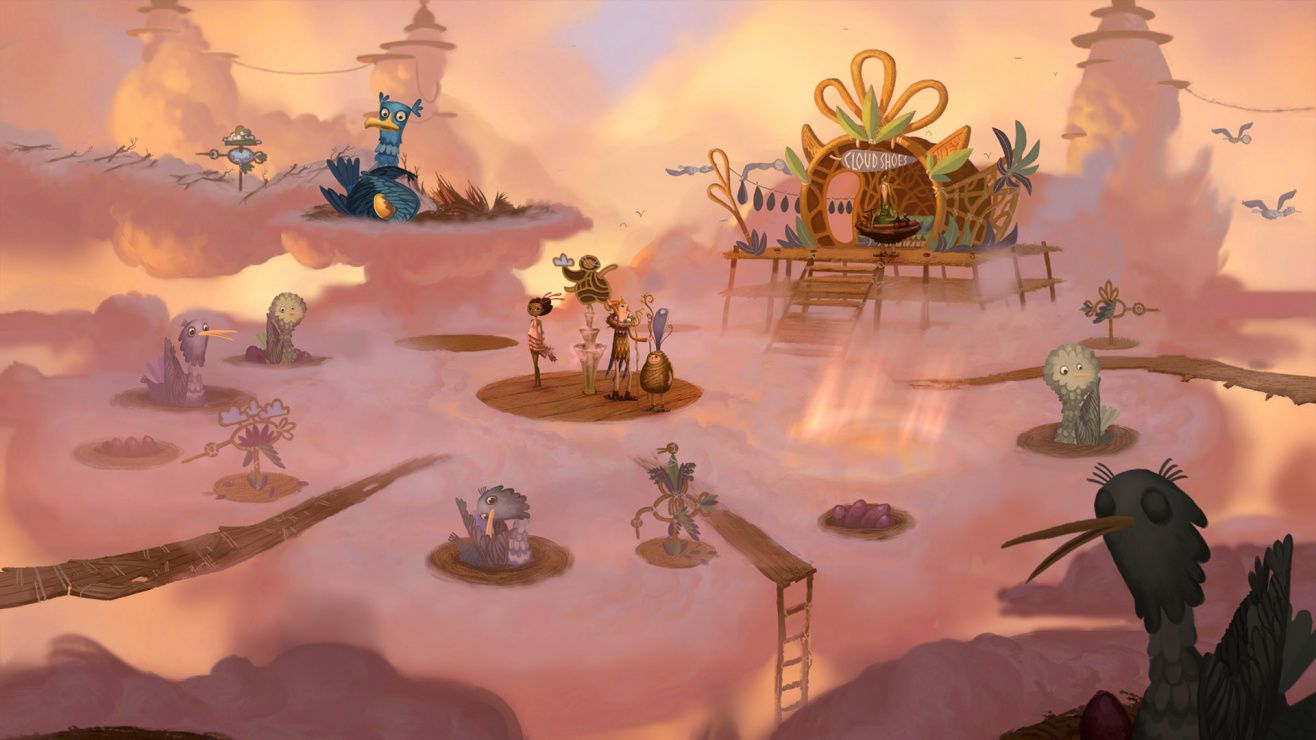 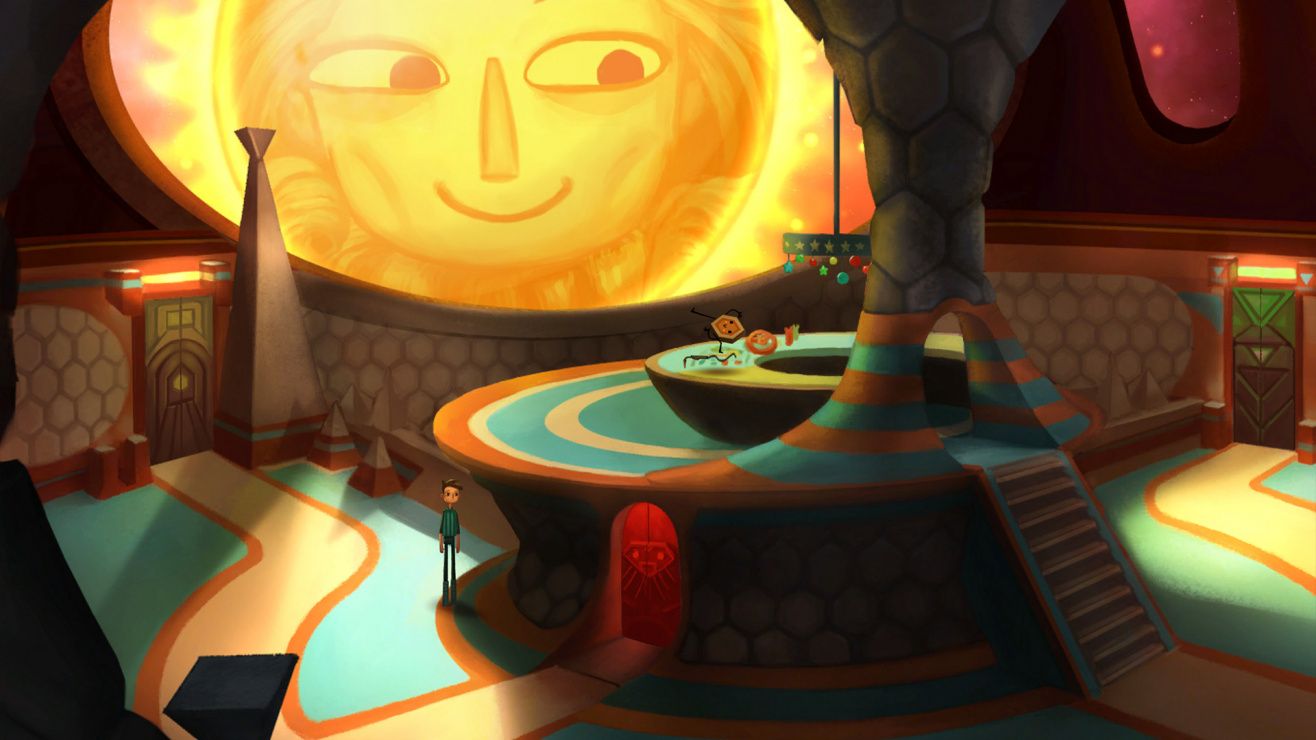 My playtime: 14.7h (based on Steam, 100% achievement)
Grindy Achievement(s): No.
Optional Achievement(s): Yes (~24 achievements).
Difficult Achievement(s): No.
Intro
Broken Age is a point-and-click game with a story that was told from two different points of view. You'll be able to switch back and forth between characters and continue where you left off.
Pros:
- Freedom to choose which story to clear first
- Puzzles are randomized each run
Cons:
- Most puzzles are confusing to solve
- There isn't any indication that you need to switch characters to solve some puzzles
Should you buy this game?
Yes.
If you like point-and-click games with good-looking visuals, buy this game at a sale.
In-Depth Review
Graphics
The graphics use a unique style that may look as if it's drawn of crayons, but way smoother. Characters have a cute, comical look with their simplistic style while backgrounds are given a lot of detail in their surroundings, sometimes with a zoomed-out effect to show how vast the area is. Each location has a certain theme in mind to give a sense of uniqueness, whether it's a town full of clouds, a beach-like area, or a yarn-themed spaceship. Everything is portrayed well with their unique theme and certain aspect as its focus, including the residents who look similar to the environment they lived in.
Story
The story is told from two different points of view. You're free to choose whichever to play first and switch whenever you like, all while retaining your progress. Although both characters share the same characteristic, they both have different values and concerns due to the environment they were raised in. This also stays true to the residents who lived in all areas since they have different rules and habits. The story will have a different focus on each act and although the first one is wrapped up nicely, the game's ending might be lacking to some people due to the emptiness.
The Game
Gameplay
The attempt to promote switching between two characters is unique, yet not working at the same time. As I said before, you'll be able to choose between two stories to complete, and since the game has three acts, you must finish both stories in that act to progress to the next one. While this doesn't pose any problems at first, the game will require you to switch between stories to solve some puzzles in the second act without making it obvious. People who are stubborn to finish the story before moving to the other one will get stuck forever because of this, and some might even resort to brute-forcing some solutions because the answer isn't available anywhere with that character.
Puzzles
The increased difficulty on the second act ruins the whole game. The first act is actually on the right difficulty for me - most solutions are easy enough as long as you remember everything in each area. However, the second act increased the difficulty by a huge margin, introducing the concept of arbitrary puzzles where you either have to brute-force a solution or figure out how the puzzles work from the very little hint that is provided in the game. These ruined my immersion in the game, making me forget about where most things were - the little hint that was given to solve a solution won't be obvious anymore because I was too focused on the difficult puzzles. It wasn't fun to solve these puzzles since you have to figure out what the developer was thinking, especially since the hint for the mechanics is very well hidden in the game.
Puzzles are randomized, making every playthrough to be unique. I didn't understand the reason for the randomized puzzles at first, especially since there is no reason to play the game twice unless if you are attempting the speedrun achievement, which shouldn't be in a point-and-click game in the first place. However, I soon changed my mind after I experienced the difficulty. The randomization will force people to understand how the puzzle works before solving it, giving the sense of satisfaction of solving the puzzle. The difficult puzzle also turns out to be easy, although still annoying to solve, as long as you know what to do.
Length and Difficulty
I finished the game in 12.6h. I believe that the game can be way shorter than that if I didn't get stuck on the puzzles several times. Some of that playtime was also spent reloading my save file because there are a lot of tricky, missable achievements that I tend to miss on. The rest of my playtime was spent in obtaining the speedrun achievement, which shouldn't be hard to do if you remember everything. The game is easy and fun at first although the increased difficulty from the second act might ruin the experience.
Specs
Intel Core i5-9300H 2.40GHz, 8GB RAM, NVIDIA GeForce GTX 1650
Conclusion
To be honest, the game is a mixed bag for me. The first act was perfect - the difficulty, the introduction to the worldbuilding, the mystery - everything was combined well to make it an enjoyable game. However, the second act was ruined with its puzzles - it wasn't fun to solve them due to how vague they are. The story, visuals, and voice dub are the only things that keep me to continue playing the game, and they did a good job at it. I liked seeing the interaction between characters and while the story turns to be bland at the end, the voice dub covers it up by their quality voices. It was hard to recommend this game as a whole, although I couldn't say that it was a bad game either - it's just that the puzzles are too hard to solve that it affects the experience.
Visit SaveOrQuit.com for detailed game reviews, posted daily!

The game is very decent, they just forgot to make a decent ending.

An enjoyable modern point & click with a high production budget. I enjoyed the storyline. Some puzzles felt too abstract but once I completed the game, I liked the challenge of trying to speed-run the game in under an hour for the last achievement. It was stressful but felt satisfying to accomplish.
Additional Details


Game Saves
Manually, whenever you want

Great game. It could use without the wire puzzles. Simply setting the robots into different modes like "cleaning", "investigating" etc would have worked all the same and would have avoided some overly convoluted puzzles and a narrative plot hole (how does Shay or Vella know the solution that is on the other character's narrative side if they don't communicate that solution to each other).
The story also was a bit rushed (we know nothing about the main antagonist right up until almost the end and there are some loose ends, Sure, we destroy the "chain of production" but what happens with the antagonist's people?) but in general it is satisfactory.
The characters are very charming and you care about them almost immediately. It helps the voice acting, art and music are all amazing.
As a backer, I am proud of the final product. A work of art, even with the convoluted wire puzzles. A must play for all adventurers!

Funny, full of heart, and with a couple of genuinely jaw-dropping moments. Highly recommend.

Great story, world, art style, voice acting, and music. But the gameplay just is not for me, Too much moon logic

Sentient cutlery, vomiting trees and child sacrifice, this game has it all.