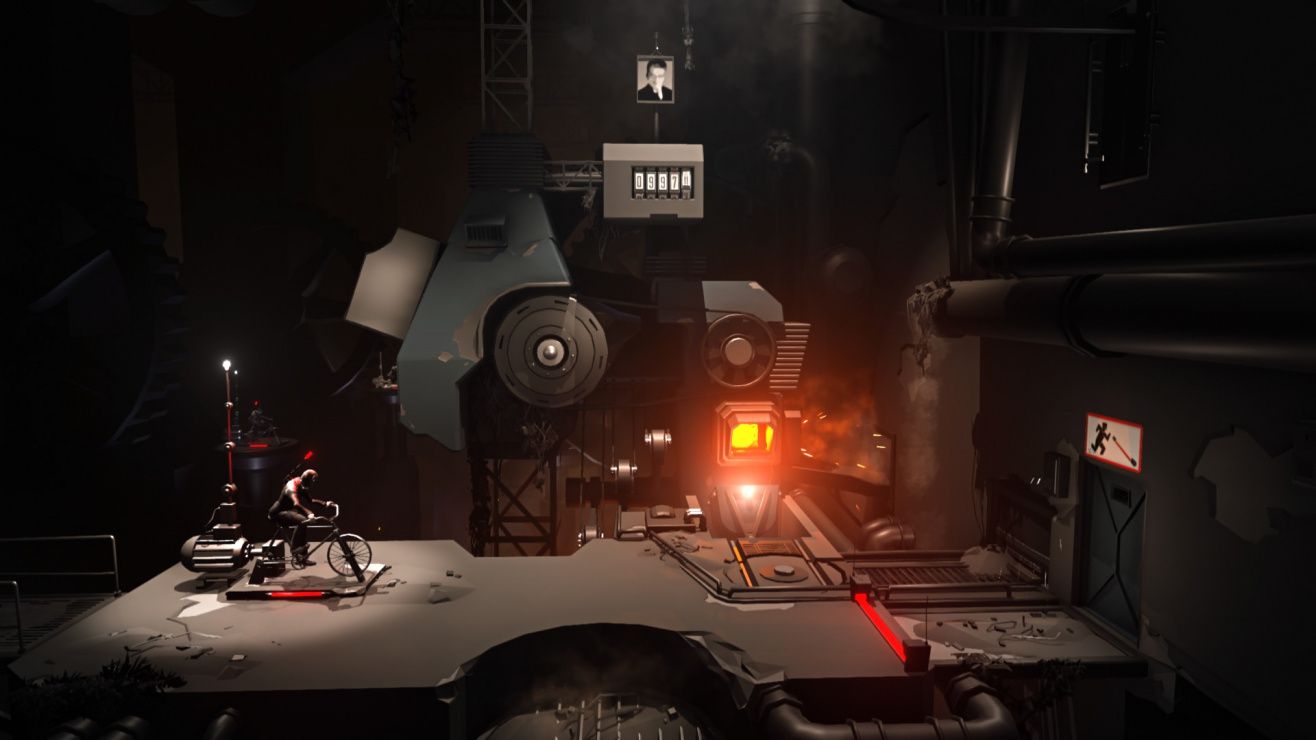 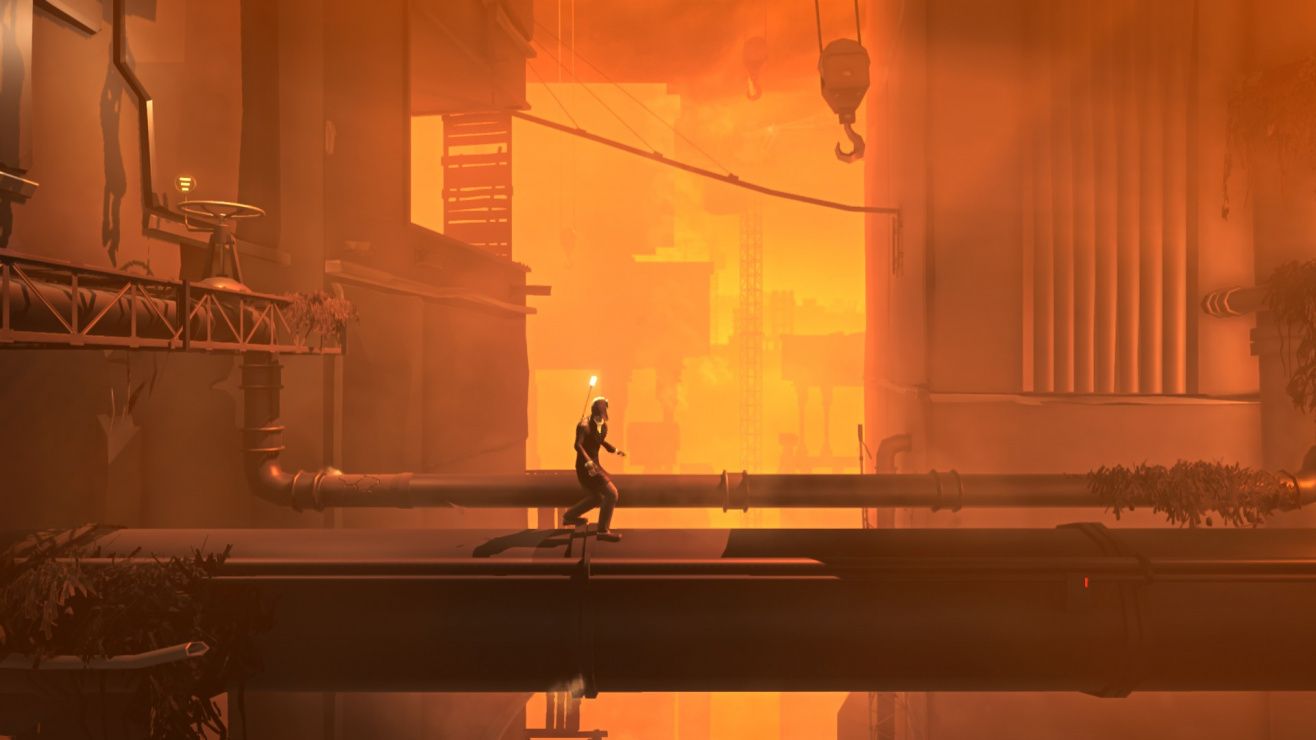 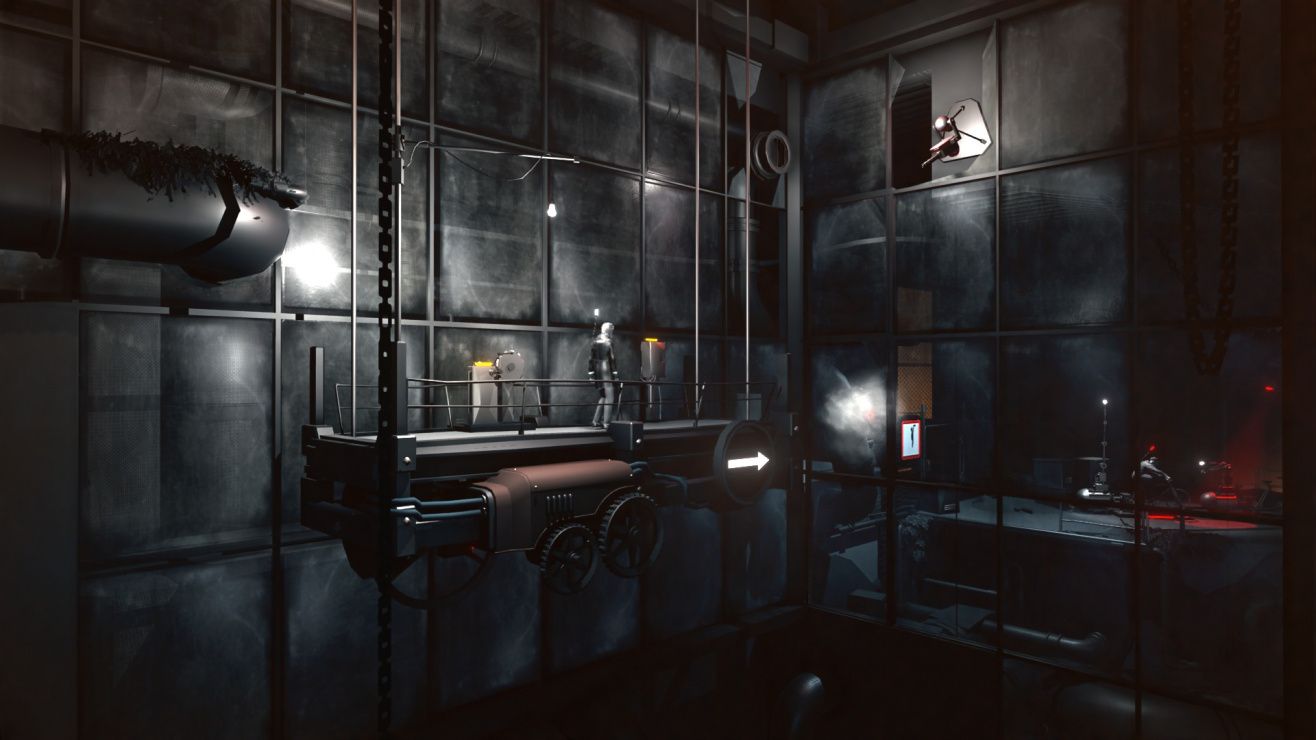 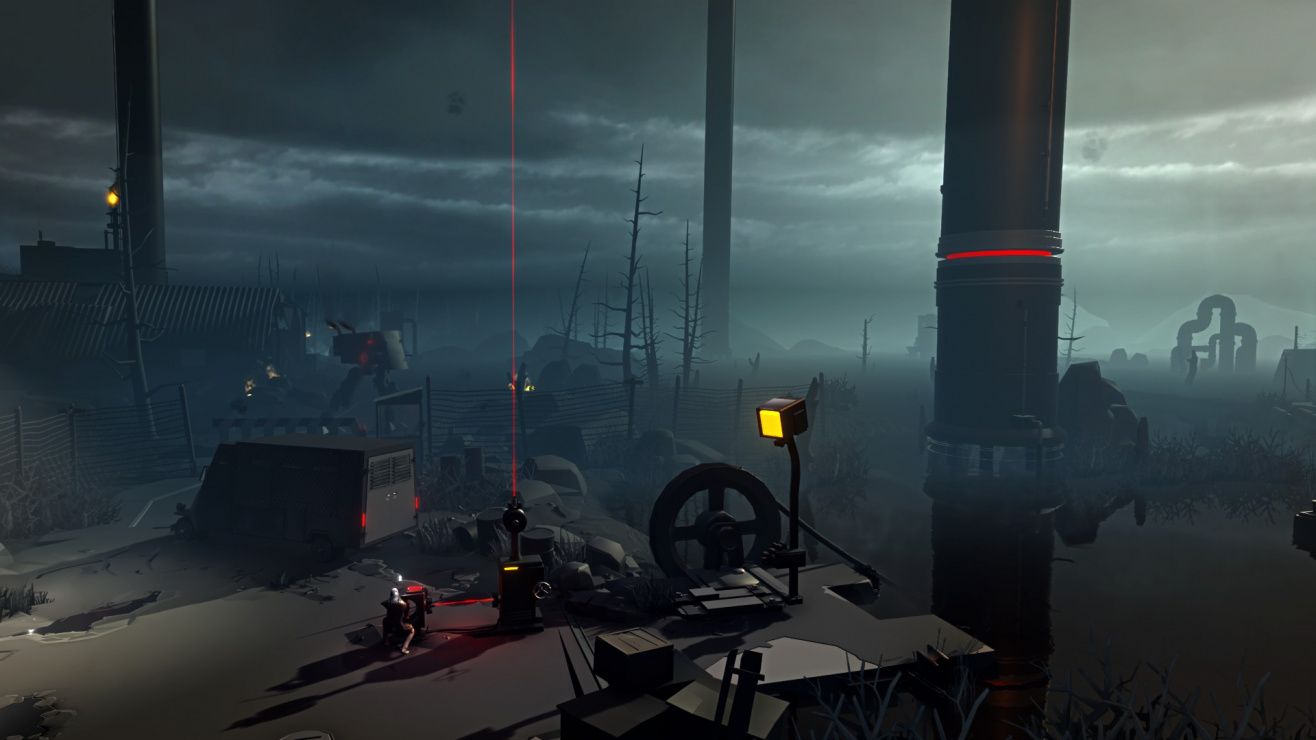 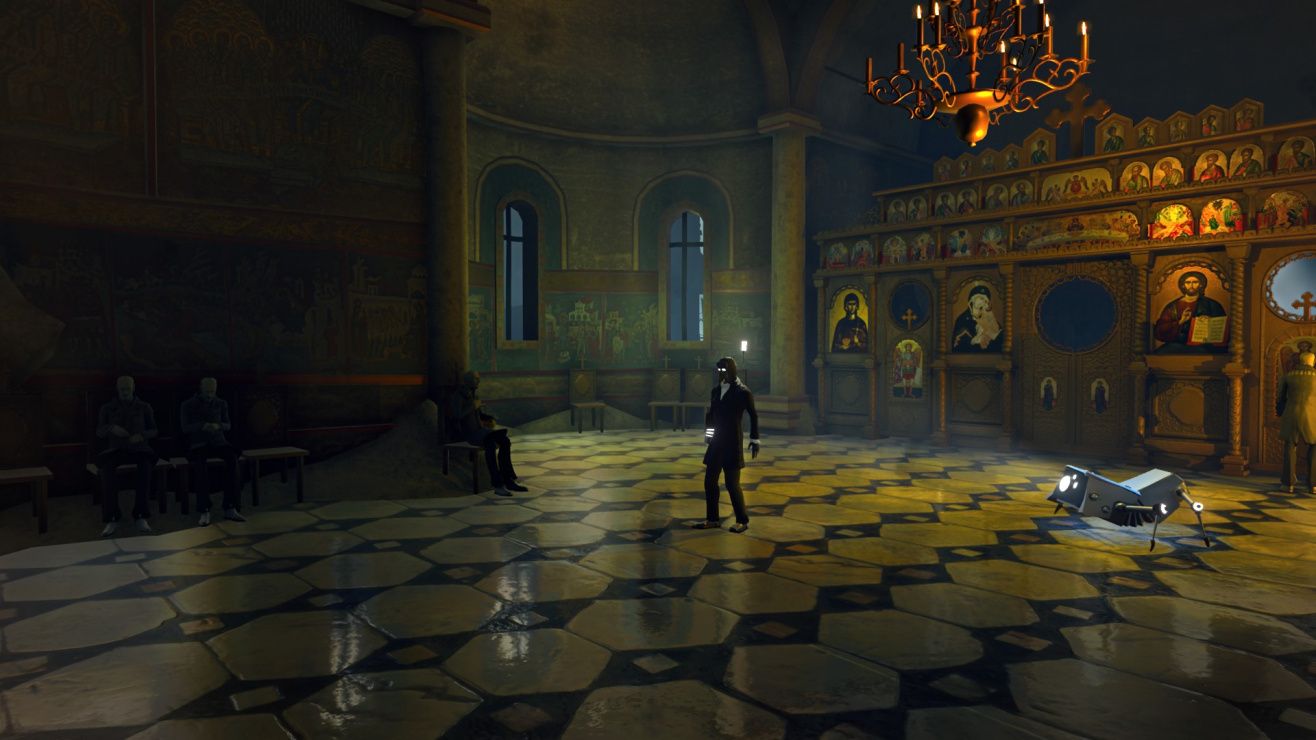 PC Steam Console Playstation Xbox indie adventure Nintendo puzzle atmospheric survival dark stealth
After decades of toil, an old machinist plots his escape from the oppressive grasp of the Communist regime. Through hidden passages, shadow and grief, he struggles. Ingenuity, reflexes and deception are his tools. Along the road, he befriends the most unlikely creature, an abandoned little robot. Could they escape this bleak and deadly world, together? Features • Unravel the puzzles buried within the oppressive atmosphere of a dystopian dictatorship • Harness the power of a stolen designator tool to manipulate both man and machine • Befriend a lonely lost robot and earn its loyal companionship • Take your shot at overthrowing a Communist State inspired by real world events
Share Share Share
Promote for 50G

I got this game a while back and playing it off the back of INSIDE, it left no impression on me. I uninstalled and got sidetracked with another game. Black the Fall is a very decent 2.5D game. I am really glad I did not just push through it as I would have been far less interested in it than I am now having been starved of a decent game from this genre for a while.
-----------
PROS
+ stylish. this game is oozing style. The black and red communist colours, the backdrops, the stereotypical dystopia is nailed bang on.
+ out of the box. A lot of the puzzles will require you to do some lateral thinking and I love it when a game takes old classic puzzles and flips them so hard that even though they are still the same thing, they appear completely different to us.
+ sense of world without language. As with all of the best 2.5D games the lack of dialogue or written notes doesn't seem to stop them from being extremely efficient storytelling machines. This is what really draws me into this genre. I love the whole show don't tell aspect.
+ evolving. The game doesn't stick with the same thing for too long. It switches stuff up as if it knew I was getting bored with a mechanic or something.
+ credit where credits are due. The final credits was a pretty cool way how to do it. I must admit I was not expecting that.
-------------
CONS
- platforming can be a bit clumsy at times.
- unintuitive puzzles. There are a few puzzles where you will know EXACTLY what you need to do but you didn't place an object in the perfect spot or you didn't hold a button for long enough. Some failures lead to self-doubt and the lack of scaffolding or tutorials could make this a rough experience for rookie puzzle platformers.
-------------
This hardcore take on communism and revolution is a tad overpriced for my wallet considering the playtime and quality. It is good but its not the kind of thing I'd say to my friends like "holy moley have you played Black the Fall?" More the kind of thing I'd say "Oh, you have Black the Fall in your backlog? You should definitely give that a shot if you liked Monochrome."
Or pick it up on a deep sale if you are just curious.

Short version:
Pros:
+ Stylish visuals
+ Subtle storytelling and world building
+ Some inventive puzzles/sections later on
Cons:
- Controls are messy
- Too short
“Long” version:
Black The Fall is a 2.5D puzzle platformer developed by Sand Sailor Studio and published by Square Enix. You play as an old machinist who decides to escape a totalitarian regime.
The game features a subtle approach to its story – at a first glance, it is nothing more than a story of an average Joe escaping but the world building suggests otherwise. Throughout your adventure, you get to meet other individuals who have also escaped or are just hiding from the regime. You see dilapidated structures and the remains of a hopeless society.
Black The Fall definitely tries to present a complex story while taking inspiration from real world politics. While this usually is not my cup of tea, I can appreciate its inclusion here, as it can be ignored if the player chooses to do so.
Gameplay is a mixed bag.
The controls feel a bit stiff and unresponsive at times. There is barely anything truly innovative about the platforming and puzzle solving.
On the other hand, you get some pretty stellar sections that are, unfortunately, too short – being in complete darkness and having to rely on sound cues to move was really cool and a welcome change of pace, for example.
You get to run, climb and jump to solve puzzles, as you do in many other games, but you also have the option to control other “things” (I am being vague here) with a gadget and interact with levers and switches. Puzzles are usually straight-forward and there are only some frustrating ones because they require precise positioning of objects or barely visible platforms.
Sound is also average.
There is a minimalistic soundtrack in this game but I found it unremarkable. It gets muffled my everything else. Sound effects are serviceable for the most part but your character’s footsteps are too loud and get obnoxious during the quieter moments.
Graphics and presentation are surprisingly good.
You do get to see some pretty bland, colorless areas but they sell the oppressive atmosphere they were going for. Some more colorful areas are introduced later on and those look great.
The game is absurdly short. You can complete everything in 2-2.5 hours (achievements included).
It takes clear inspiration from other games like Limbo and Pandemonium but I still feel like it lacks an identity of its own. The story and the world building are remarkable but everything else floats around averageness. It might resonate with others a bit more but I do not think it is worth full price.
Worth getting when it is dirt-cheap.
Final score: 6.5 out of 10.
If you enjoyed this review, please consider joining my group and following my curator page on Steam.

One day you just decide that you have enough of this totalitarian stuff all around and you decide to leave. It's not going to be easy as they are not fond of their good obedient sheep leaving its herd.
Puzzle game with dystopian view on the world. There are things you will recognize for they were and there are things that many dystopian authors describe in their works. Either of those two choices isn't a pleasant reality to live through. The heavy atmosphere of the game reflects that.
The game is simplistic in its design, although it suits it and I wouldn't want it otherwise, there were parts I would welcome better presentation… at least of the game mechanics. Because of that some puzzles got rather frustrating, even though there wasn't anything particularly hard about them and just required for you to think out of the box. When I knew what I am supposed to do, I have actually enjoyed the puzzles.
Even though you can die, there is no penalty upon that and there are lot of checkpoints so you don't have to repeat long sequences.
It's a bit of a short game and it doesn't offer much replayability, which is good on one hand as the theme is heavy and not very cheerful. For achievement purposes you don't need to go through the whole game as you can pick up from many saves in each chapter.

i escaped from communistic regime, i consider myself lucky, not everyone had a chance to survive it..

If you like short side-scrolling puzzle games like Limbo, Inside, Little Nightmares, Stick It To The Man, then you'll enjoy this one. I liked the art direction and puzzles were good. Needed to reference a walkthrough twice b/c wasn't clear at all what to do but otherwise a good and balanced challenge. Plus this games really shows the perils and nightmares of communism and at the end shows some real photos from the Romanian Revolution.

+ Playtime 4 hours.
+ Nice graphic and great atmosphere.
+ Interesting puzzles.
You have to die a lot before you figure how to solve the puzzle.

I absolutely love this game. The puzzles are entertaining and you really need to think to find solutions to them.
The gameplay is great and I had a lot of fun. The aesthetic is also perfect for me. The developers did a great job in displaying a dystopian world and the broken spirits of the people in this game.
i love it.