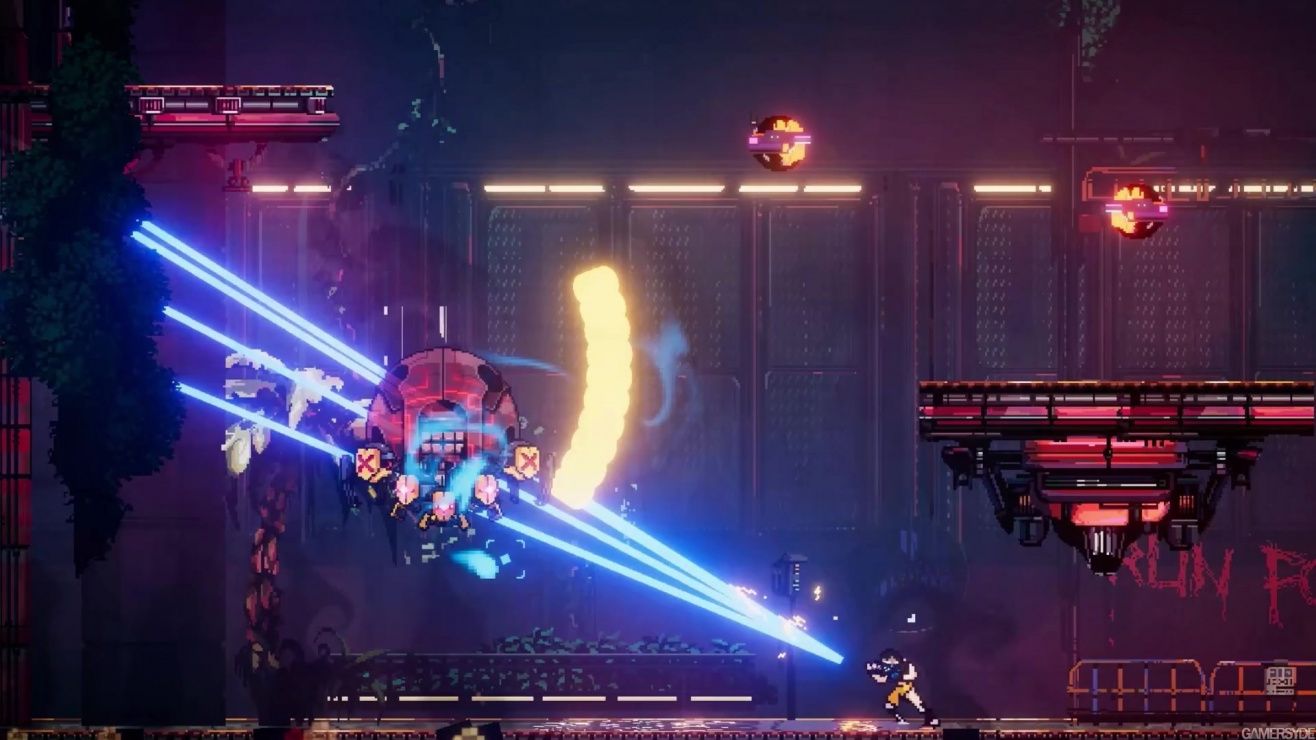 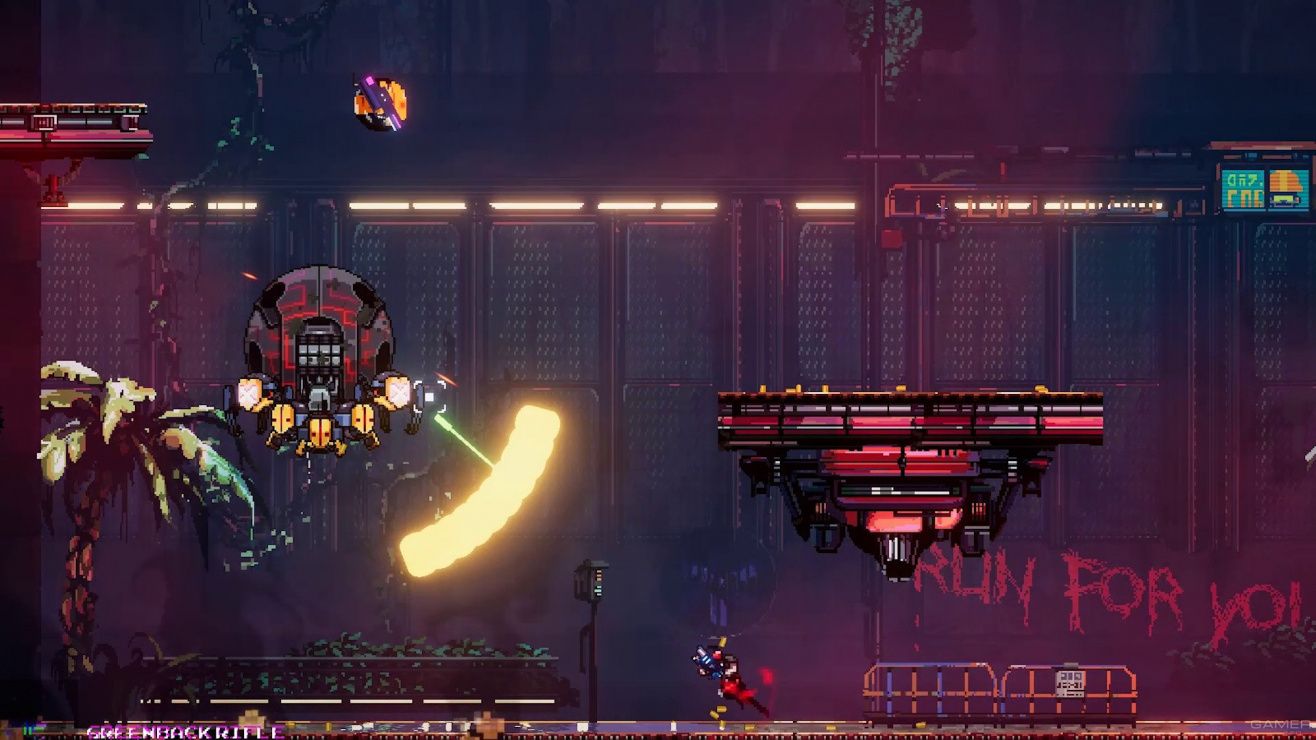 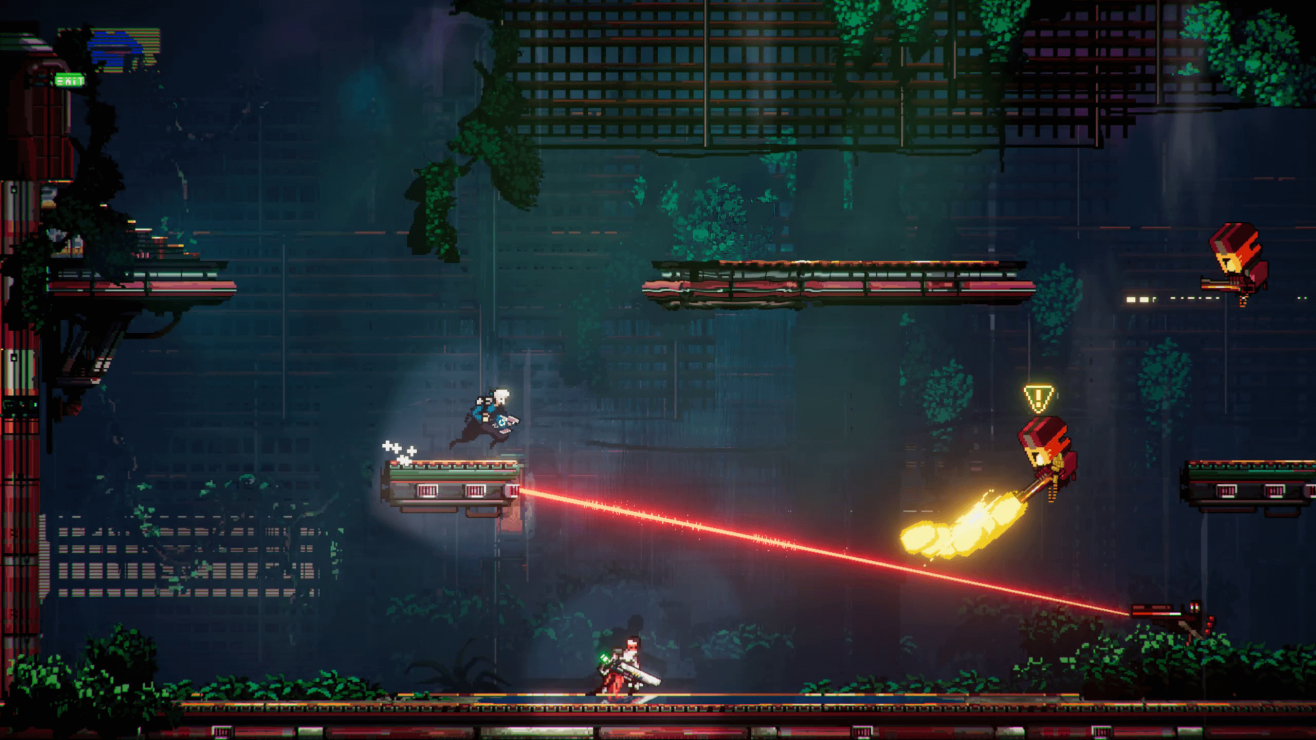 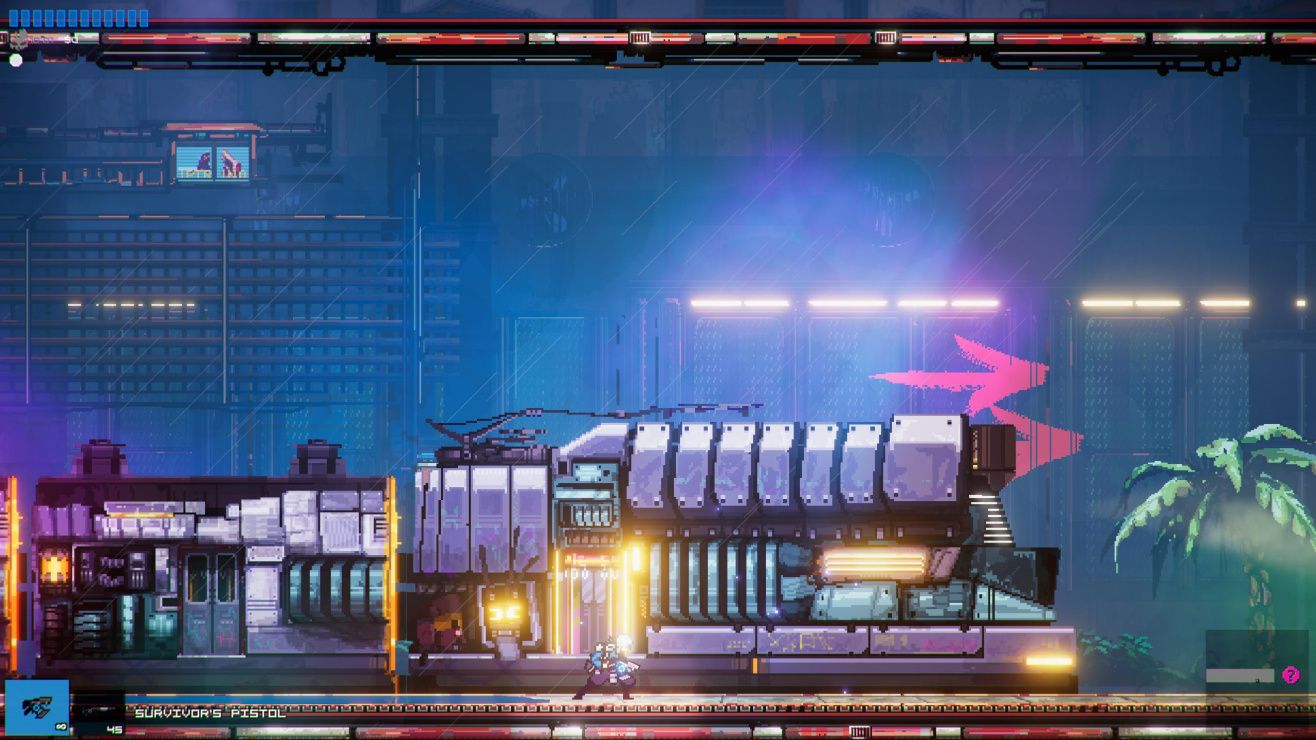 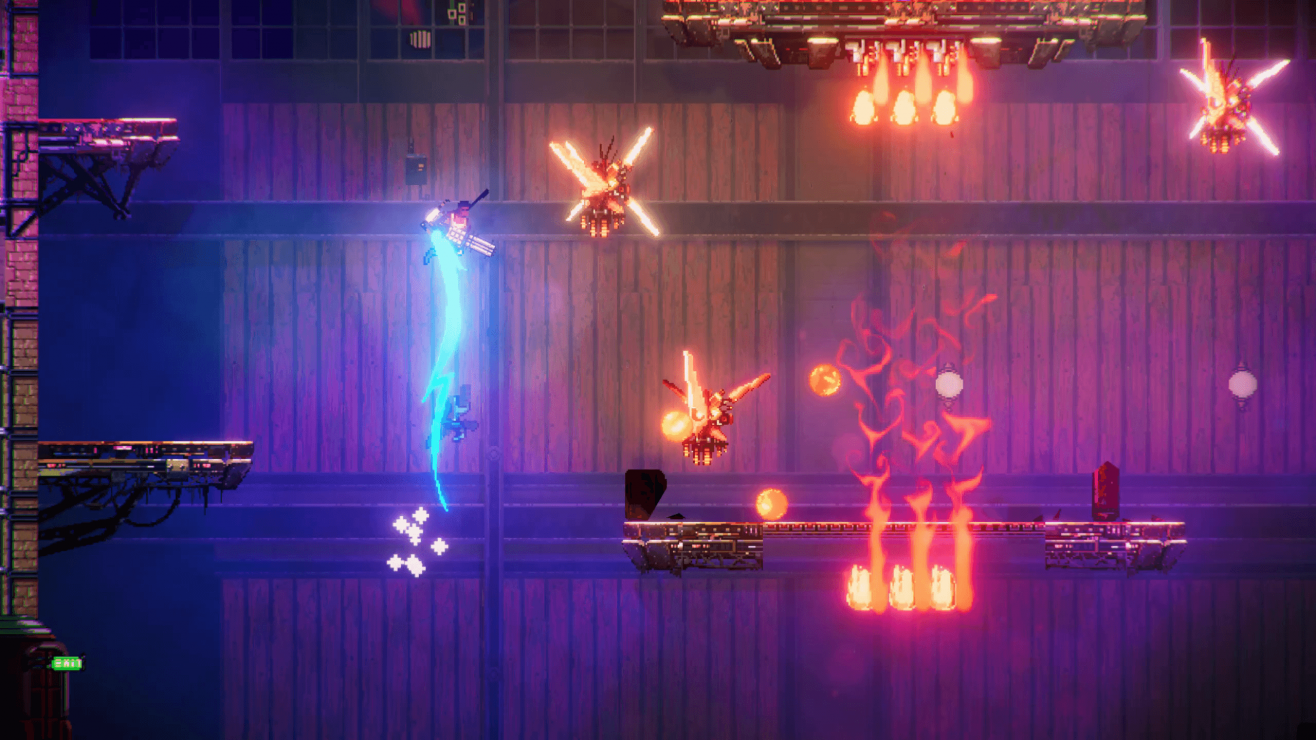 PC Steam Console action adventure Nintendo platformer pixel roguelike roguelite
Black Future ’88 is a Synth-Punk roguelike 2D action Shooter. Vertically climb an always evolving procedural tower to reach the top and kill its insane owner…before your heart explodes. Shoot, slash, dash and upgrade yourself to survive the endless waves of deadly traps, homicidal AI, crazed junkies and colossal Wardens standing in your way in a stylish alternative version of 1988. The world is reeling from a nuclear cataclysm, created by Duncan, the tower architect. The First of his bombs fell in the summer of 1988, and by December they had blacked-out the sun with endless rain. We decided to stop keeping time after this, and it’s been 1988 ever since. Everything that lived through the initial attack will die in the extreme floods that followed. These are the times after, where there are no more months, or even weeks…everything is measured in minutes left to live. Take on the mantle of one of the last remaining misfit survivors, and fight your way to the top of the tower to kill the architect and stop the endless nuclear rain. Ascend to die, and die to survive.
Share Share Share
Promote for 50G

Do I recommend Black Future '88?
Tough one. "Yes and no" would be my answer.
I've spent a little more than a full day as whole playing this game. And, sadly, this is probably as much enjoyment as I am going to get from it. And yet, these 26 hours were (mostly) a blast. It's fast, it's brutal, it's hard, it has some cool cryptic mechanics to discover, it allows you to build your character from many varying pieces you find throughout the game - traits, weapons, powerups, curses. It's quite a lot.
And yet...
For the most time I found myself sticking to one playstyle only. There are traits that are definitely prefered over others, some being useless, some even silly. Some of these outright break the game to pieces, but more on that later.
The game expects you to manage your limited resources with utmost care. Every second you have should have to count. You pay with your limited lifespan of 18 minutes for about anything you encounter in the game. Want a trait from this terminal? It's a minute off the clock. Healing station? Another thirty seconds down. You can even bet your time against the game and if you survive that long to get to another deadlock station, you get your investment back with interest.
Now, this mechanics looks exciting, because it demands that you carefully consider how much time you need to get to another station - and pick the appropriate option to make the most of it. But then, some late game traits make regaining your time so easy that it's made simply pointless to try and bet.
And yet...
There's a weapon in the game that fires a huge detonating blast of energy that kills most regular enemies in just one salvo. The thing is, the ammo is theoretically unlimited, because it uses your dash charges instead of bullets. This means, you either dodge or hit very hard. Now dashing is a crucial thing, because when you get hit, you get no invincibility frames. That means, if you get caught in a burst fire of a machine gun drone, you're pretty much screwed. Said weapon is very strong, but it has a certain skill treshold you have to hit in order to use it. Unless you get a trait that refreshes your dash after killing anything. Now add some timing and you're impossible to stop.
There's a trait, later in the game, that lets you get your deadlock time back if you chain your kills together. After getting these three, every obstacle the game threw at me would be a blessing in disguise. More enemies? Fine, I get more time per room. Less weapons and ammo? What do I need these for? Curses? My sidearm sword deals more damage the more curse I get, so curse away!
Indeed, after you learn how to break the game, it becomes a crazy massive power trip that sends massive tingles down your spine. That is, unless the game breaks down before you do it.
I glitched into the null zone several times. I've got the game to freeze with a combination of traits that a) made lots of guns to drop from fallen enemies and b) made every gun on the ground fire with every time I fire. I somehow got my clock to 00:00 after hitting 59:59 and... died, because I was "out of time". And I found out that if you move too much after killing a boss, you might not get your reward for it. If it was a final boss, oops, your run is never going to end!
Speaking of interesting but underdeveloped mechanics, the game unlocks new content the more you play it. Sounds great, but you'll quickly find that only several successful runs are enough to get everything the game has to offer.
This game has a lot of flaws, but, at the same time, where it shines, it SHINES. The aesthetics are great. The music keeps ringing in my head even though I've not played BF88 for weeks now. The vibes it gives are unique - it has to be the most punk game I have played. The very premise is distilled punk - you're making your life shorter to stick it to the Man even harder, how wicked is that?
My advice? Get it on sale - but once it is on sale, get it along with the soundtrack. Sadly, there isn't much of it, but the short EP you can put together is well worth the price of the game itself.

Pixel art in a 80's neon punk Akira like setting hacking and shooting through hordes of enemies at a fast pace. Yes yes yes, me like!

Black Future 88 is an underrated platformer with areas that fall short, clad in cyberpunk atmosphere that won't quit.
Pros:
+Varied Weapons
+Codex that tells you what stuff does and how to get hidden things once you discover them
+Beautiful gunplay imagery; it gets a little too muddled with all the smoke and lasers, but is impressive nonetheless
+Game doesn't damn you to "Gungeon Hell" where you are stuck fighting the early bosses with a trash sidearm for 6 minutes
+Actual Knife's edge gameplay: Like other roguelites, you can put yourself on death's doorstep extremely quickly; *UNLIKE* others, you can shift the tides back in your favor relatively quickly.
+ If you like synthwave music or the 80's, you should play this. Soundtrack bops.
+Also, sfx are amazing. Boss doors opening and intros are exciting.
+Going up a level doesn't require a loading screen. Just progress from the boss room and you're on your way. Unique and feels nice.
Cons:
-Movement is a bit wonky: Jump could use a little more physics/speed change instead of being a fixed speed hop to feel more natural.
-Bouncing off platforms when your character's chest hits them is annoying. A Dead Cells climb-up would be cool so when you hit or dash into a platform you can grab it and keep up your altitude in a room and avoid breaking the combat flow.
-Your projectiles can get hard to see, especially with the bullet-type weapons or when you have bouncing.
-Stims aren't very clear with what they do, even after you take them.
-BF loooooooves to sneak insta-kill explosions in on you. Exploding health bar, exploding rockets, enemies' bodies that explode unexpectedly. Sure to tick some people off when a great run gets ended cheaply.
- I'm about halfway through unlocking all the items, and the perks are still a little lacking, it would be lovely to see more in-depth ones or dynamic options that you can utilize in the moment more, as right now they feel like the most lacking part of the content to me.
Verdict:
I've heard of a lot of bugs here, but after 2.5 hours and beating the final boss for the first time, I haven't experienced them. Your mileage may vary.
Game is definitely worth it on sale, but it's very pricey for what you get in terms of in-game time. If you like the aesthetic however, pick it up whenever you feel the pull. Little pricey by conventional metrics but it definitely has cult potential, replayability and (most importantly for it) heavy atmosphere.
Black Future certainly has fun content and unlockables, and pacing which creates a great flow. Excited to see where the game goes and to see whether it shakes what is in my opinion an unfairly low overall review score. It definitely surpasses several others I've played in the 2d roguelite platformer genre.

I remember first playing this game at PAX East quite a while ago, and instantly falling in love. Watching the development and the growth of this game was awesome and is now one of my go to games when I need some time to kill. A lovely aesthetic and fantastic music, with tight controls and varied pickups. It is definitely a must have for rougelikes.

More Cyberpunk than Cyberpunk ;P
The main antagonistic force is called SkyMelt and you have a bomb in your heart!
Joking aside this is a really great action platformer roguelike/lite game, with a truely amazing and theme appropriate soundtrack.

It's a really good game honestly, I've played a lot of roguelikes and this one feels quite different, the style is nice and the combat is quite satisfying, although there is one thing I'm writing this review to talk about and it's the requirements.
How in the name of fuck was this game made, I never ran the game on my old laptop after buying it for 18$ and being told I could easily run it, so why doesn't it go above 16 fps. Now that i have a new PC I can run the game quite well yet my gpu temp gets highest I've seen after playing 28 other games on the new PC.
So what I'm saying is don't get fooled by the requirements, it needs a pc that can run games like red dead 2 to be able to play it, other than that it's a really good game and I recommend it.

I can't believe this game isn't more popular. There are so many interesting mechanics, quirks, and creative design all wrapped up into an absolutely phenomenal aesthetic package to please any roguelite or platforming action fan. The combat is fast and furious, with a quick run/death cycle, with different perks, upgrades, and weapons randomly spawned to keep things fresh. The deadlock timer - you have 18 minutes before you automatically die - is a stroke of genius, and being able to spend your time as currency for upgrades, as ammo, or gamble for more makes for constant interesting decision-making.
Also, it must be said - the music is simply incredible. I don't often listen to game OSTs, but the music is so upbeat, catchy, and high-quality that I found myself listening to the soundtrack even when not playing. The music and atmosphere alone will hook you, and the lightspeed gameplay will keep you coming back for more.