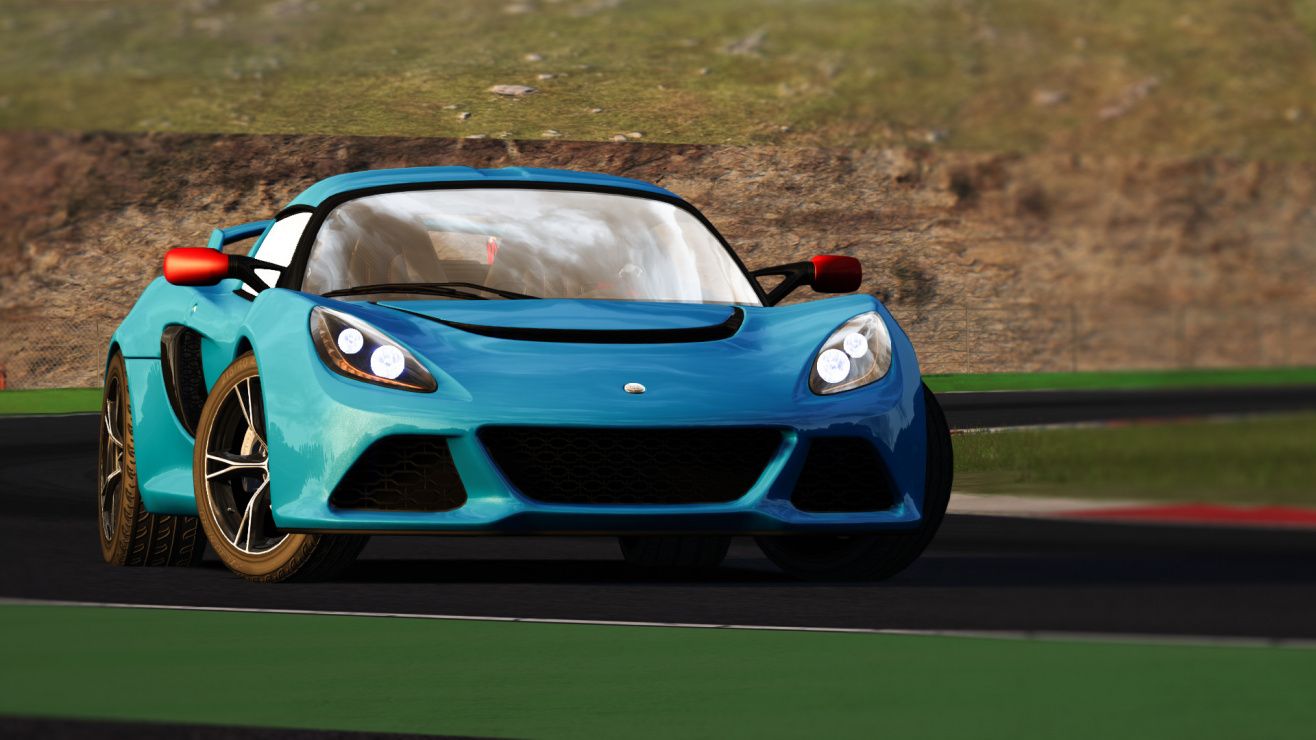 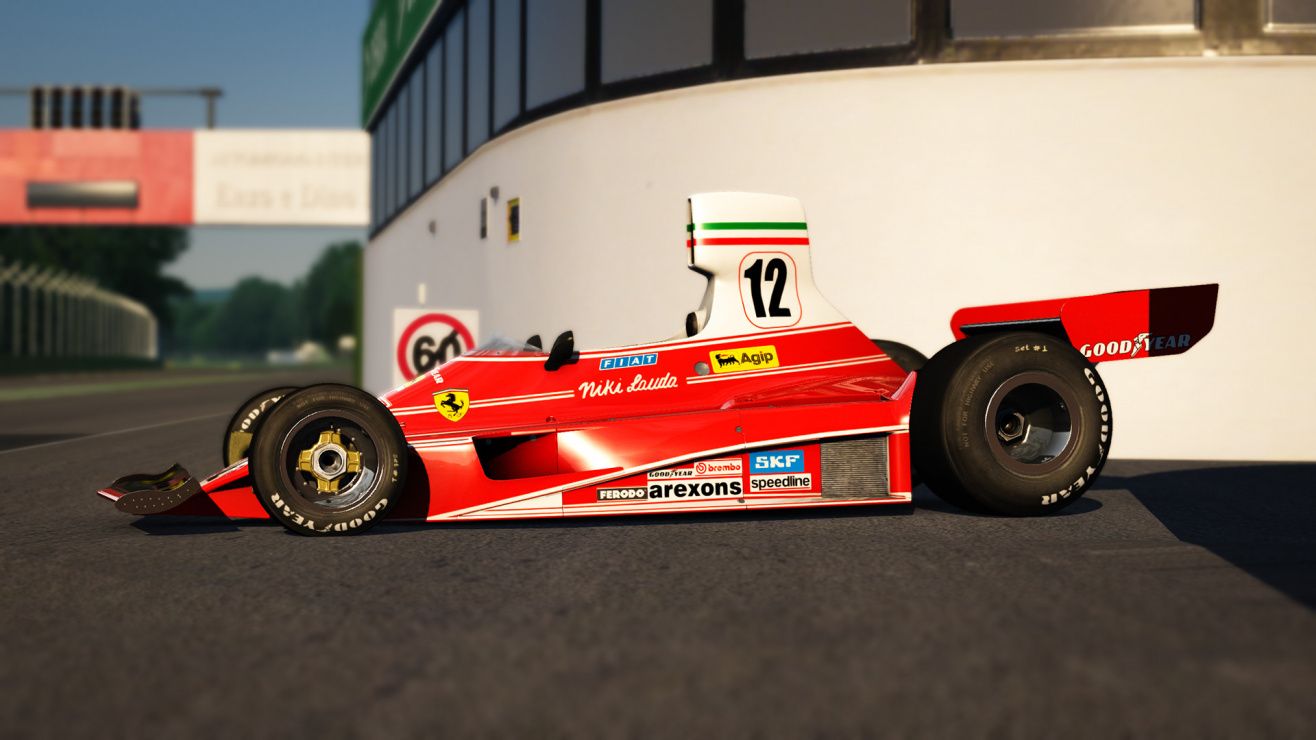 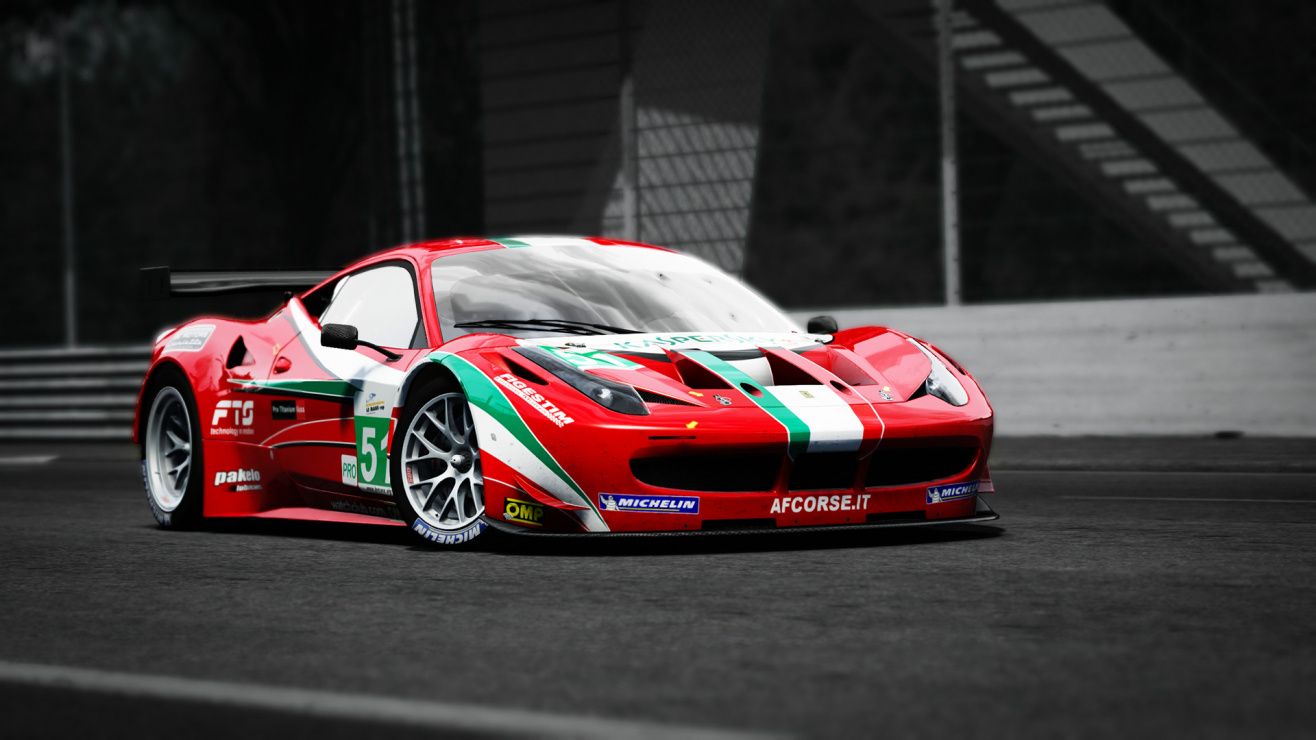 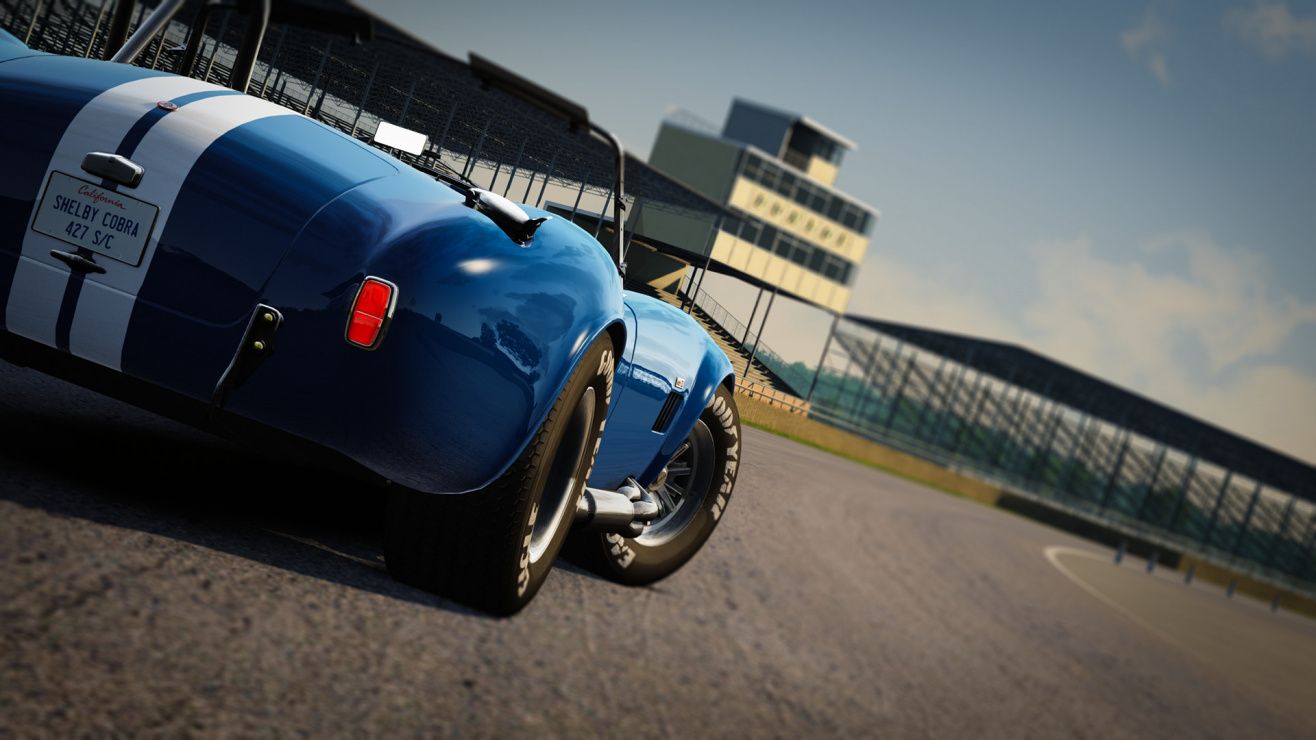 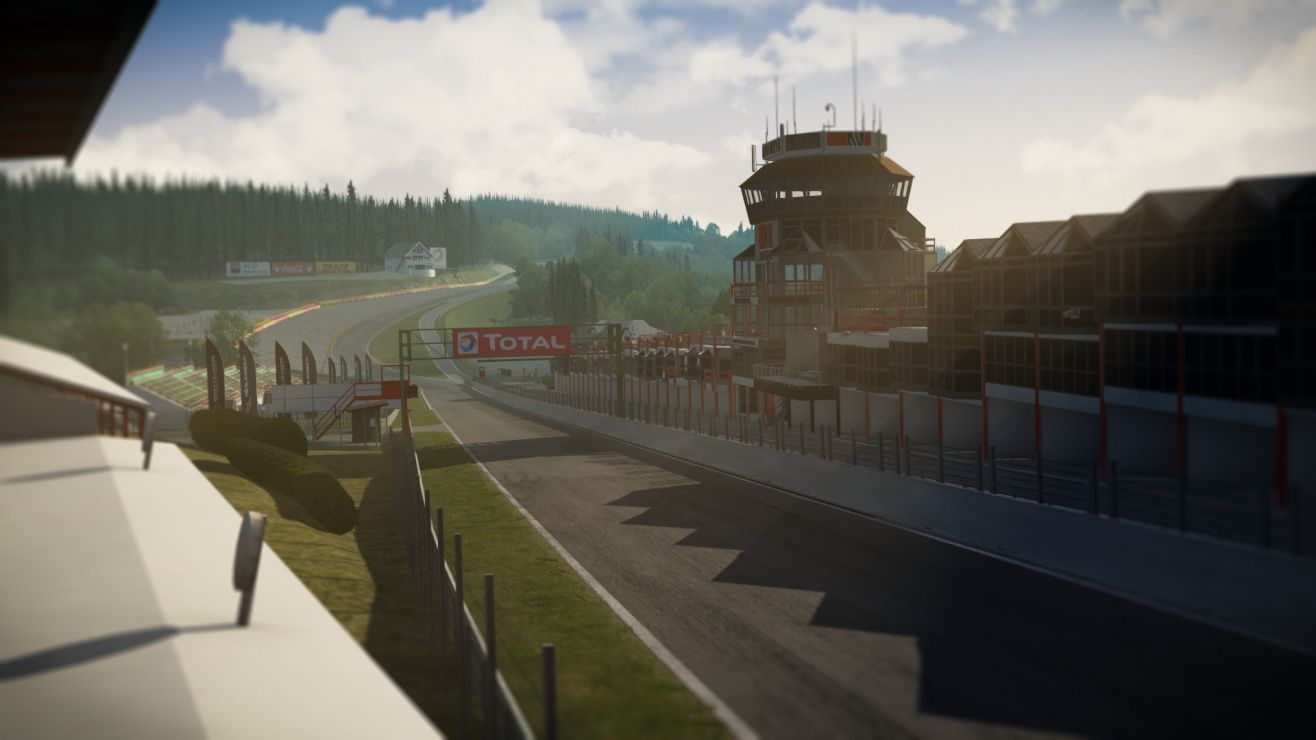 Unless you're looking for e-sports quality competitive online multiplayer leagues, this is the BEST sim out there for force feedback wheels; it detects different wheels, pedals, shifters, handbrakes (on different USB devices!) seamlessly; with the must have community-made Content Manager, changing settings for switching out wheels (F1 vs Drift) or accessories (H Shifter Vs Paddles) is easier than in any other game.

The base game of assetto corsa isn't the reason many players love this game. For sure, it has a lot of good content and you could be content with just playing the game stock, but the real experience comes in mods. Do you want a picture-perfect recreation of the tokyo highway system? A full set of 70s touring cars? A realistic rally mode? You can get all of those on the internet. This game has essentialy unlimited content, and that is what makes it great.

Assetto Corsa is basically a pure perfection. It is one of the best racing games/simulators ever made.
You see, I am a casual gamer. I play racing games with a gamepad, and with all assists on. And despite the fact that Assetto Corsa is labelled as a hardcore driving simulator, in reality, this is an extremely accessible game, even for fans of arcade racing games like me.
If you like playing racing games, do yourself a favor and buy Assetto Corsa. Don't bother with that abomination called Project CARS. I had extremely high hopes for Project CARS series. It seemed that these games had everything - beautiful graphics, amazing sounds, plenty of tracks and cars to drive... But to my disappointment, cars and handling in Project CARS games are utter garbage. Physics are a complete joke. Every second car spins out when exiting from the corner, and playing these games with the gamepad is impossible. Not to mention super toxic online community, and tons of fanboys who defend pCARS despite its horrible flaws.
Assetto Corsa doesn't have these problems. Physics in this game are perfect. I can complete a lap on Monza with Lamborghini Huracan GT3 or F1 car without ever spinning out when exiting a corner. Cars have weight. They don't feel floaty. They also have grip, as well as responsive brakes, and overall behavior.
Assetto Corsa is basically Gran Turismo for PC. Although the game features somewhat outdated graphics, if you install community-made mods, such as CSP, Sol and Horizon, the Assetto Corsa will look better than any other racing gaming currently available on the market.
And I didn't even mention mods. My God, this game has thousands of mods! You can mod everything. Everything! You can mod graphics, weather, install new cars, install new tracks, add new liveries, add custom apps, create new championships, drive on free roam maps... You can even install HUD from Initial D, and drift on Akagi mountain roads with Toyota AE86!
Overall, the Assetto Corsa is still a truly amazing game, despite the fact that it's seven years old. It features tons of content, and is super accessible both for arcade racing drivers, as well as for sim racing drivers. The Assetto Corsa Competizione is the best GT3 racing game ever made. However, the Assetto Corsa is currently a more feature-rich game thanks to the amazing community which supports it. I think the future of this series is bright, especially since it's able to offer an incredible driving experience, even if you are a complete racing noob like me.

After 400+ hours in the game its time for a short review.
This racing simulator is a must have for everybody who enjoys racing on the pc.
I call it the swiss army knife of racing sims. This sim together with racedepartment.com will allow you to race almost anything on almost any track you can think of, the modding community is still very active and amazing.
Pair this sim with crewchief and content manager, throw in SimHub for an extra dashboard or transducer and you will have a great time. Also, please give the creators of these great tools/additions a few bucks for their troubles.
Next use content manager to download the shaders patch and bring the sim into 2020 looking pretty close to some modern sims.
Load up this sim with the BMW E30 (dtm spec) on Mugello and race that against 20x 100% AI for 12 laps with a good pedal set and ffb wheel and if you can honest tell me that didn't tickle your racing fancy I would be amazed.

Realistic racing with endless possibilities and great community...
This is Assetto Corsa and it's one of the greatest racing sims out there. First I'm going to show you it's quirks and features and then I'm going to give it a Dapper Dan-score.
Why did I buy it?
Racing games were always a guilty pleasure of mine. As a kid, I've loved Mario Kart 64 and Pole Position 64 in the N64-days. Then NFS came to the PC and we've played that on my friends machine, later M3-Challenge with my dad on our own PCs. As a adolescent I got into Go-Karting and racing never really left me, so I do still race as an adult (4x4s that is).
When I got back into PC gaming I've seen a buddy play Assetto Corsa in my STEAM friends list. This had me intrigued and I took a look at it. Since it was in sale at the time and it's got the Nordschleife, I thought, it couldn't be much of a loss, right?
Fast forward a few weeks...
I have to admit that the base game, while being entertaining, does live from it's official addons and 3rd party mods. I've had my fun with mod cars (like FIA racing trucks), mod tracks and later of course witch the official bought DLCs like the Nordschleife Touristenfahrten (public driving on the Nordschleife as it functions as a toll road when not in racing use), Ferraris, Porsches and Japanese pack.
While it's a lot of fun, it's also got a steep learning curve. A very steep that is. You'll buy it, you'll download it, you'll start it. You'll pick a supercar and your favourite track. And you'll destroy said car in Tourn1 because you can't get your four wheeled dream to turn that corner. Then you'll start researching... and you'll get better, since you'll begin to understand basic driving physics first, advanced driving techniques later. And you'll corner that car from then on. Not always, but most of the time. And you'll start overtaking other drivers online...
Positive
- Great original content (including DLCs), laser scanned tracks, licensed cars
- Good driving physics (people who race other sims like RRE, PC2 etc. say it's the best of all, I don't know that)
- Good 3rd party content (paid or free mods like cars, tracks, liverys, addons)
- Great online community (public servers or closed races), since most people play fair and drive safe
- Endless possibilities in customizing your setups (tire pressure, dampers, etc, etc, etc)
- Customizable experience from beginner to sim racing pro (from track tipps to tire management)
Negative
- Steep learning curve (but if you master it, the reward is huge
- A good wheel is almost a must, playing with a controller is frowned upon
- Your wife might not be happy for you to sit in front of your PC for hours just to be a quarter second faster on the Nordschleife
So, on the weekend category...
- The racing experience is great. Please keep in mind that it's not an arcade racer like NFS but a racing simulator that needs some time to get used to, so it gets a 9/10
- There are endless possibilities for cars and tracks you can race. Racing old Maseratis on the 1966 Monza banked turns? Going on the Nordschleife with an F1-Car? Truck Racing on the transfarragan? You've got it. So this gets a 10/10
- The online community is filled with mostly good people (US / EU servers, don't know for other regions) who won't flame you for pushing them off the track by accident, apologize and be sincere and you'll be golden, so this gets a 10/10.
All in all I'd rank Assetto Corsa a solid 9/10 and recommend it to everybody who'd like to race a good simulator and isn't into arcade style racing.
Add-ons to get
I'd recommend the following addons for AC:
Paid:
- All of the DLCs
Free:
- Heli Corsa (a little ingame radar that shows cars near you, so you'll be able to decide wether to let another car pass or if you have the right to keep your lane)
- Side kick (ingame app that shows your speed, pedal position, lap time, shift spots, etc.)
- Content manager (a tool that allows to start AC directly with the selcted options (car, track, etc.), installs custom shaders etc.)
Have fun and race safe!