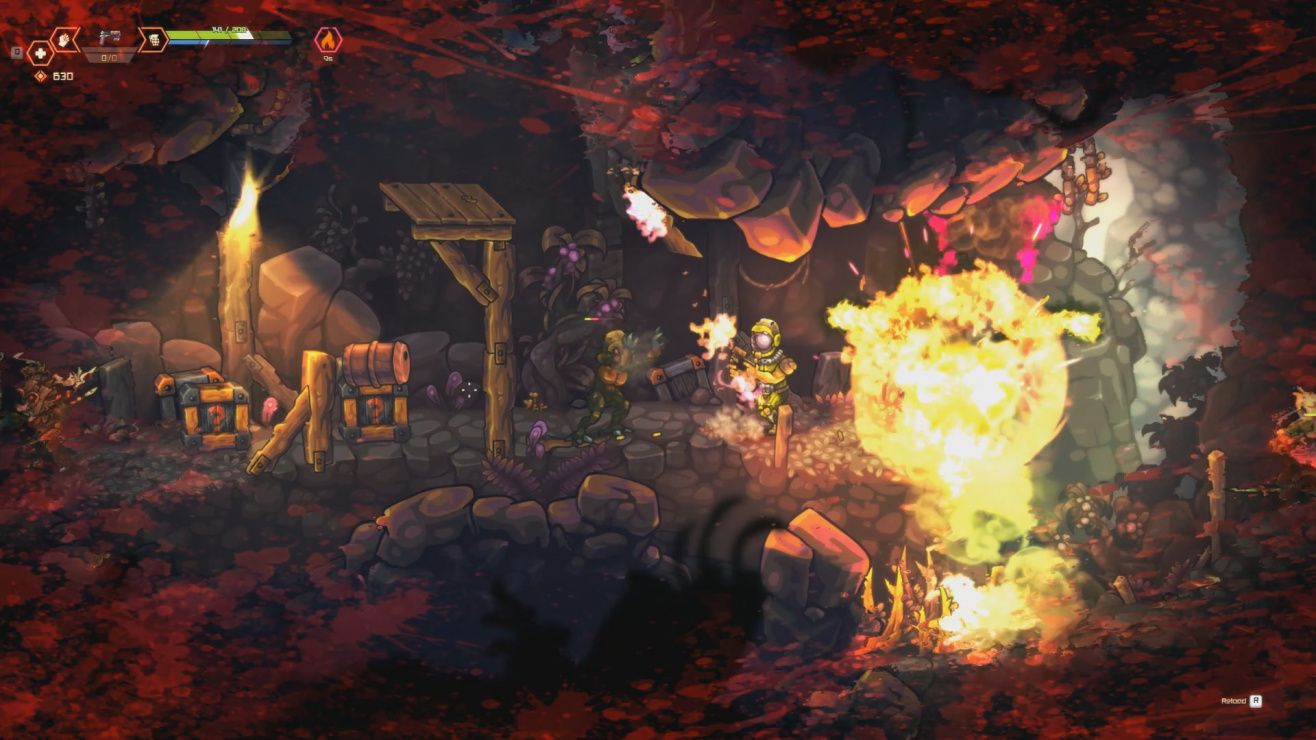 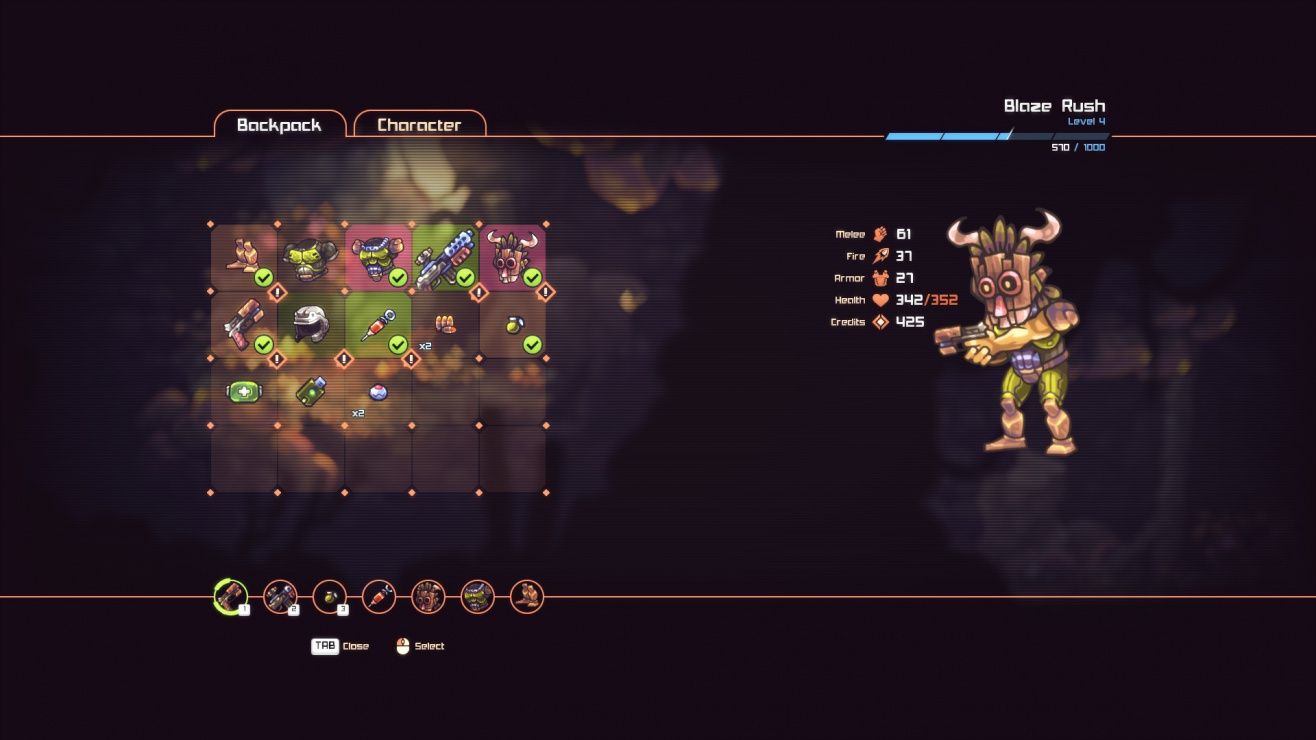 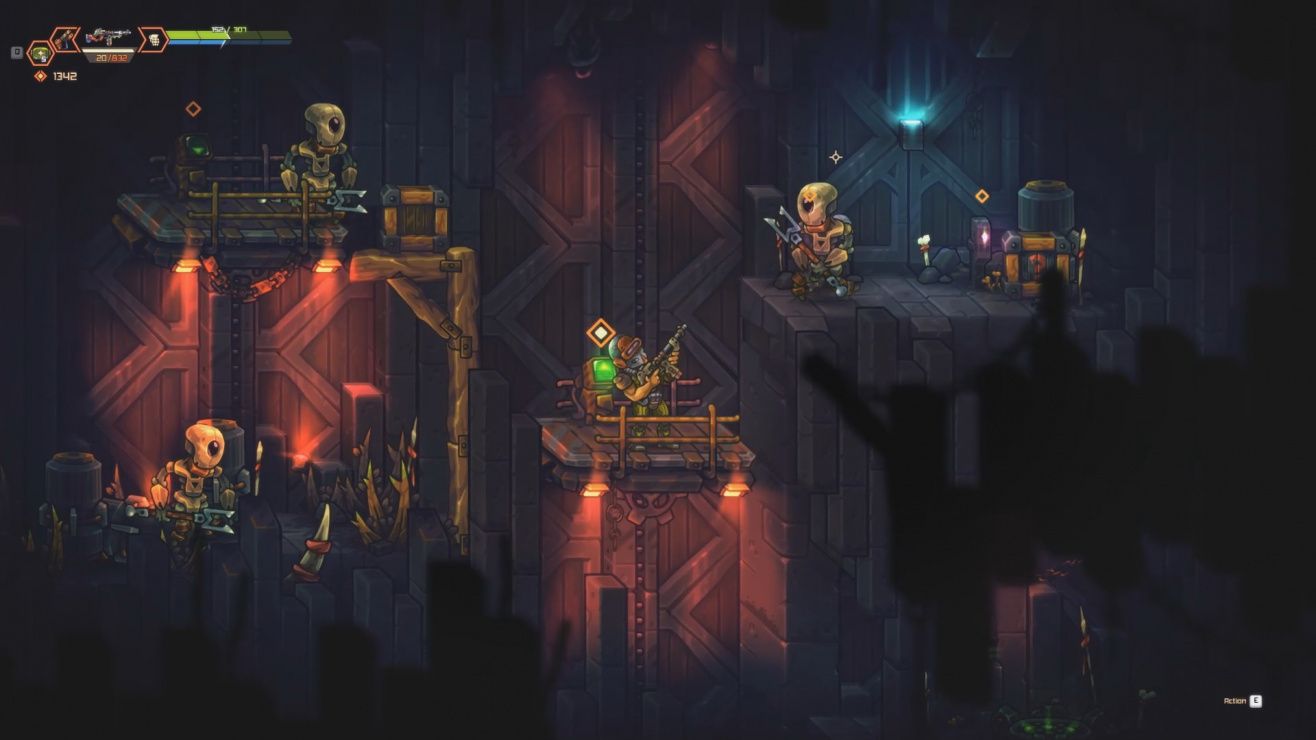 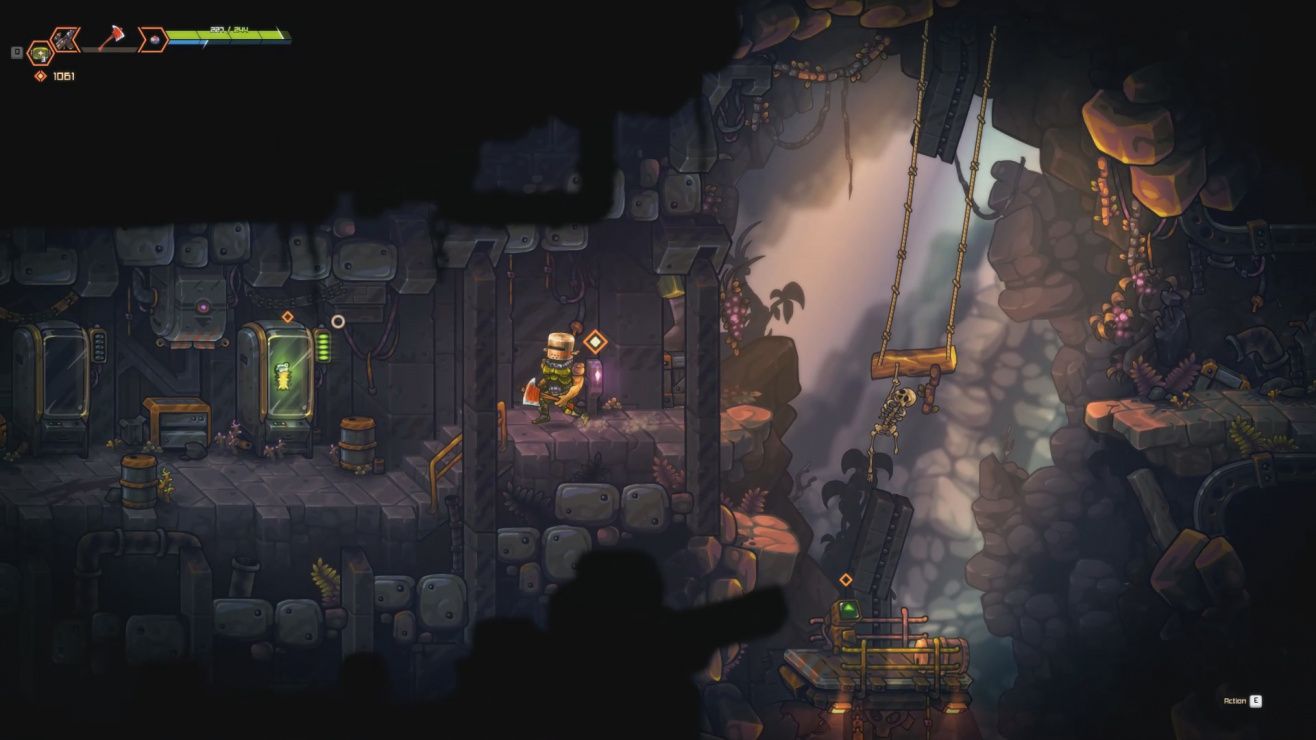 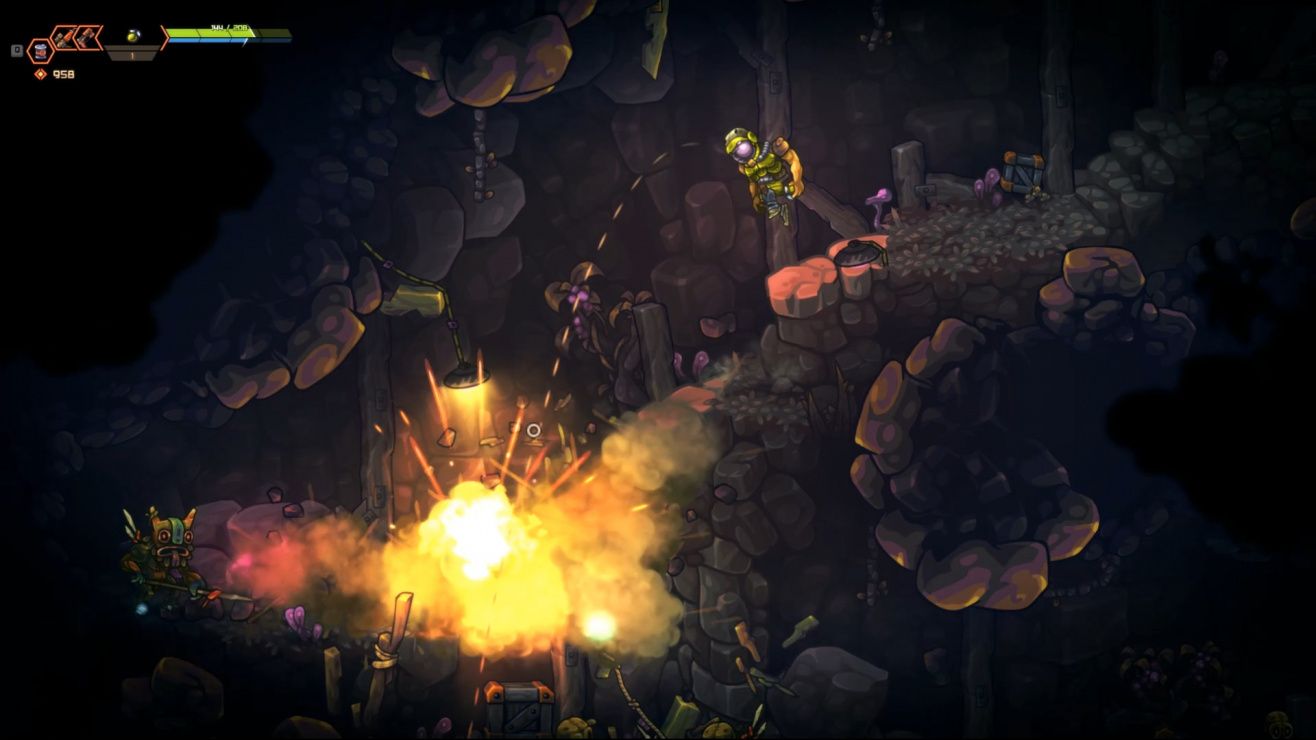 PC Steam action platformer horror zombies vehicles
Zombotron – Fight to survive on a mysterious alien planet and do whatever it takes to find a way home. Become a space-faring badass. Blaze Rush is a mercenary desperate for a job. In search of an easy payday he follows a distress beacon to the surface of a dangerous planet and the remains of an ancient crash site. There he finds a mystery that will test his strength, his resolve, and every gun in his arsenal. Zombotron features an arsenal of weapons and armor, enemies that hate each other as much as they hate you, and really nice explosions for an experience that’s out of this world. Dressed For Success Customize Blaze's armor to be the space-faring badass you've always wanted to be. A Bloody Good Time Lock and load with a variety of weapons to become a consummate badass. "Save" the Planet "Help" Zombotron's inhabitants with explosives, all-terrain vehicles, and a careless disregard for their plight or customs.
Share Share Share
Promote for 50G

if you played the flash games on a school computer when you were like 10, this is a nice upgrade

This really gives me memories from my childhood, well done.

Zombotron is a sci-fi side-scroller, shooter game. As a mercenary landing on a hostile planet, players need to fight through horde of alien monstrosity while retrieving what was stolen from the ship. At first glance, the game looks like non-pixel Metal Slug, yet the arsenal, armour system, and the RPG element have proven otherwise. These features offer more replayability and various playstyles for players to experiment. The story is plain and simple, which indicates that the game focuses on thrilling combat. Master your arms. Survive. And most importantly: kill your foes with style!
Things I Like About Zombotron:
1. World Design
In terms of aesthetic, I adore the clean artyle of background and the detailed platform design. The cleanliness of background gives off a spacious vibe, as if the planet is bigger than than floor the character steps on; the detail of the platform shows the effort the developer put in the game. They could just copy and paste the same tile throughout, but they didn`t. Instead, they create a lot of uninteractable props to make all the stages feel alive, occupied by previous civilization then, overgrown by unknown mutants and other alien life forms now. The game also rewards exploration and a pair of keen eyes. There are several breakable walls throughout each levels. They can be easily recognized by some props intentionally placed nearby, either blocking contact or being obvious indicator. In terms of gameplay, some wooden platforms and boulders are breakable, which offers a interesting and ammo-efficient way to defeat your foes.
2. Various Combat Styles
Zombotron provides the player with a lot of weapons to choose from. Enjoy close-quarters combat? Then picks up the fire axe or shotgun and blasts your way through the hordes. Pistols and rifles are you best friend if you prefer precision and the satisfaction of headshot, or not, ditch accuracy and assert your dominance with the covering fire of sub-machine guns and mini-guns. Fancy explosion? Various grenades solve any nasty situation you might encounter in this hostile planet. But wait, there`s more. Levels often contain wooden platforms and stone pillars, which can be broken for your advantage. Crush your opponents with falling debris to save ammo, lure them to attack the pillars so the rocks may fall on their heads, and even better, let the enemies kill themselves with explosive kicked to them. There are many ways to fight in Zombotron, utilizing them to ensure your survival and pleasure.
Thing I Like And Dislike About Zombotron:
Debris System
The debris system in Zombotron is a unique approach for combat efficiency. It certainly has it charm, however, there may be some problem about it as well. While falling debris is your ally, those on the ground may become inconvenience for your retreat. The debris on the ground has collision, meaning the character can step on them. This fact often leads two conclusions: player has a temporary wall of defense and blasts the enemies with ease thanks to the enemy melee units prefer breaking the debris first; the other one is rather unpleasant. If the player is chased by some heavy units, and there`s debris on the way, the player needs to spam the jump button a couple of time to stop the character from sliding off. This situation can definitely go worse should the player pay more attention on aiming shots while backing off. I can`t tell how many time I fail to escape due to the character stuck on several rocks, resulting some embarrassing death. That being said, watch your surroundings, clear the debris once the threats have been dealt with.
Thing I Dislike About Zombotron:
Inconsistent Damage From Enemies
Some enemies, mainly yellow mining bots, have some weird damage variety. I am not referring to various attack a unit can perform. Quite the contrary, I mean the damage number from a single attack. Take the aforementioned yellow mining bots for example. They are armed with hand cannon, firing explosive pills when approached. The pills can easily one-shot you if not well-equipped. I was not prepared for the explosion the first time and thus my death was inevitable. However, when the second time the pill exploded directly on me, the damage was laughable. My health bar barely depleted. Noted I had the same equipment as our first encounter, which confused me. What`s more profound was third encounter. This time the pill dropped on my toes and the explosion torn me to pieces. Based on these facts, the yellow mining bots are my worst nightmare to deal with. The inconsistent damage makes me really paranoid of their presence. In fact, any long-range explosive attacks often falls into this situation.

I got Zombotron in the Humble Conquer COVID-19 Bundle and my god was it good! It wasn't a game I could spend hour after hour in, but that doesn't make it any less impressive or fun. I spent an hour or so at a time, generally until I kept dying around the same point and needed a break before going in with a fresh head.
One of my favourite things about the game was the humour. While it's pretty simple humour, it's very effective! The witty banter between the main character, Blaze Rush, his robot companion, Ash, and the other characters they meet along the way is just priceless. They also have some great references to other well known things in their conversations, but I'll let you discover them for yourself.
You can acquire and/or buy a variety of different melee and ranged weapons as you progress, as well as different types of grenades, helmets/masks, and armour. The choices aren't huge, but the different weapon types each have a unique feel to them, which is always good! It's also nice seeing your main character jumping around in his new armour and mask every time you find a new one! I especially liked the masks!
I think the variety of enemies was spot on, and the increasing strength and general difficulty was done very well. The fact that the different types of enemies would fight each other when close enough was also something I really liked, as were the multiple options the player has when wanting to kill any enemy. Sure, you could shoot them, or hit them with a baseball bat or pickaxe, or even grenade them, but why waste all those resources? Instead, you could dislodge some rocks from above them and crush them to death. Or you could shoot the wooden support from beneath them and have them fall into a different enemy and have them kill each other.
You also get an awesome vehicle at some point in the game, mounted with it's own weapon! While it was great fun ploughing through enemies at high speed, it was a lot less fun trying to flip the damn thing upright when I've managed flip it and land upside down. Sure, I could've just got out and walked the rest of the way, but no! Perseverance paid off, and the couple of times it happened I managed to right it, it just took a long time.
The bosses you encounter are very much unique, as it the way you need to approach their destruction. While there aren't many boss fights overall, for the length of the game I'd say it was just right.
There was also a levelling system, where you get to increase your basic stats, but I'm not sure how much of an impact this had on the game to be honest. It's not really something I put much thought to while playing.
Overall, I freaking loved Zombotron! It's very well made, interesting, funny, and full of action! I highly recommend it!
For more reviews follow Gawain Games Curator Page and check out the Gawain Games Website. You can also find my review on We The Players.

Brings back alot of memories if you've played the flash game, if you havn't you're in for a treat.

TL;DR: A-okay remake of an oldschool platformer.
Back in the days when Flash games were popular, this particular title was your go-to platformer, if you wanted an arcade experience with some progression, some shooting and pretty linear gameplay.
Alas, days of Flash games are over, so the dev decided to move on and develop the game from scratch, updating graphics, physics, adding some story, more progression and weapon variety. The core gameplay, however, remained the same -- you walk around, shoot things (that are not zombie per se, but you won't tell the difference), collect coins and XP, upgrade your arsenal and move on further.
Surprisingly enough, gameplay aged relatively well. Yeah, the boss fights might become frustrating, if you didn't stock up on medkits. Yeah, driving the car is pretty annoying, since it will get stuck if you manage to turn it over on the roof. But overall, shooting enemies is fun, headshots feel satisfying, switching weapons feels like you're actually making a decision (although, every weapon is more or less viable, if used correctly).
Game balance is something that might use some extra polish, since you can sometimes be one-shot with a random rocket from a droid (which is super annoying), and some bosses are extremely hard (looking at you, stone golem), while some are a piece of cake (basically, every other boss).
Also, progression and RPG elements are a somewhat needless addition to the core game loop, cause they don't really affect your behaviour during the walkthrough -- well, only slightly, maybe.
Should I buy this game?
If you're into platformers genre, sure. It takes around 5-6 hours to complete the whole game, so it's a short, but fun and wholesome experience that takes 2-3 evenings to complete.
If you're looking for a deeper gameplay and longer-lasting experience, look elsewhere.