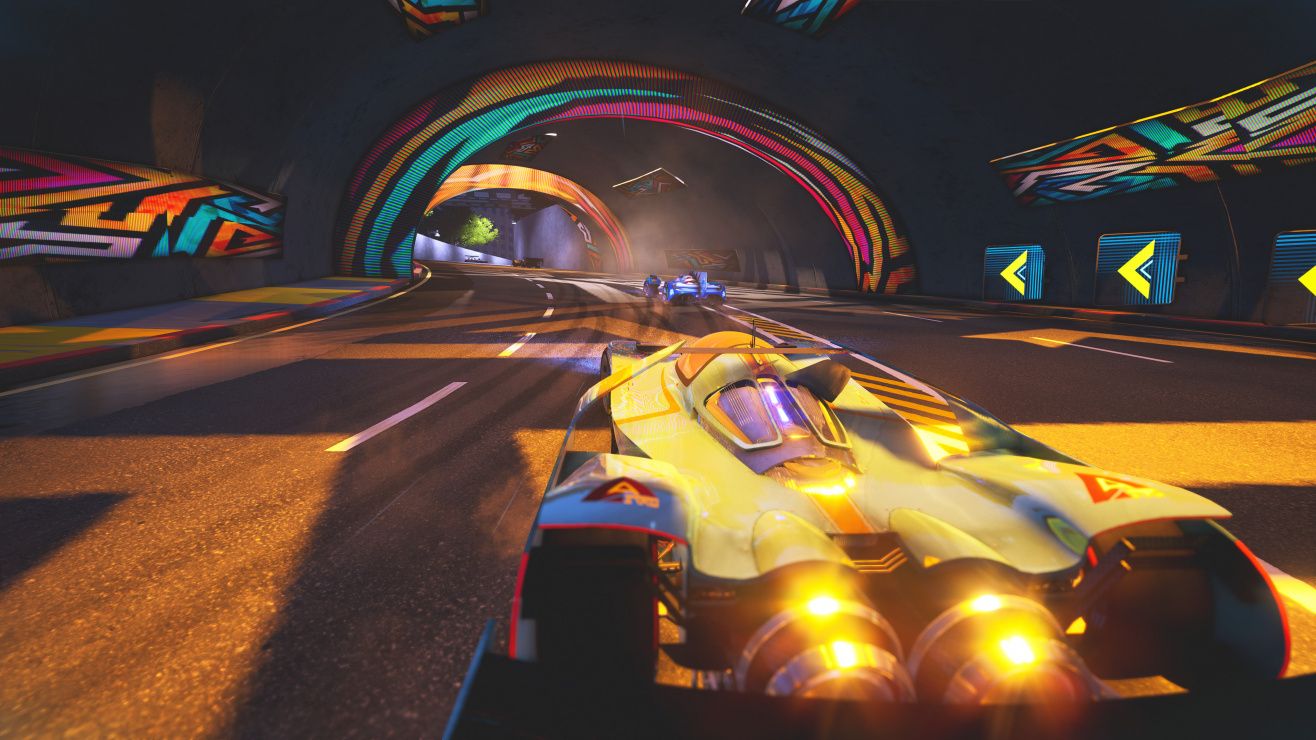 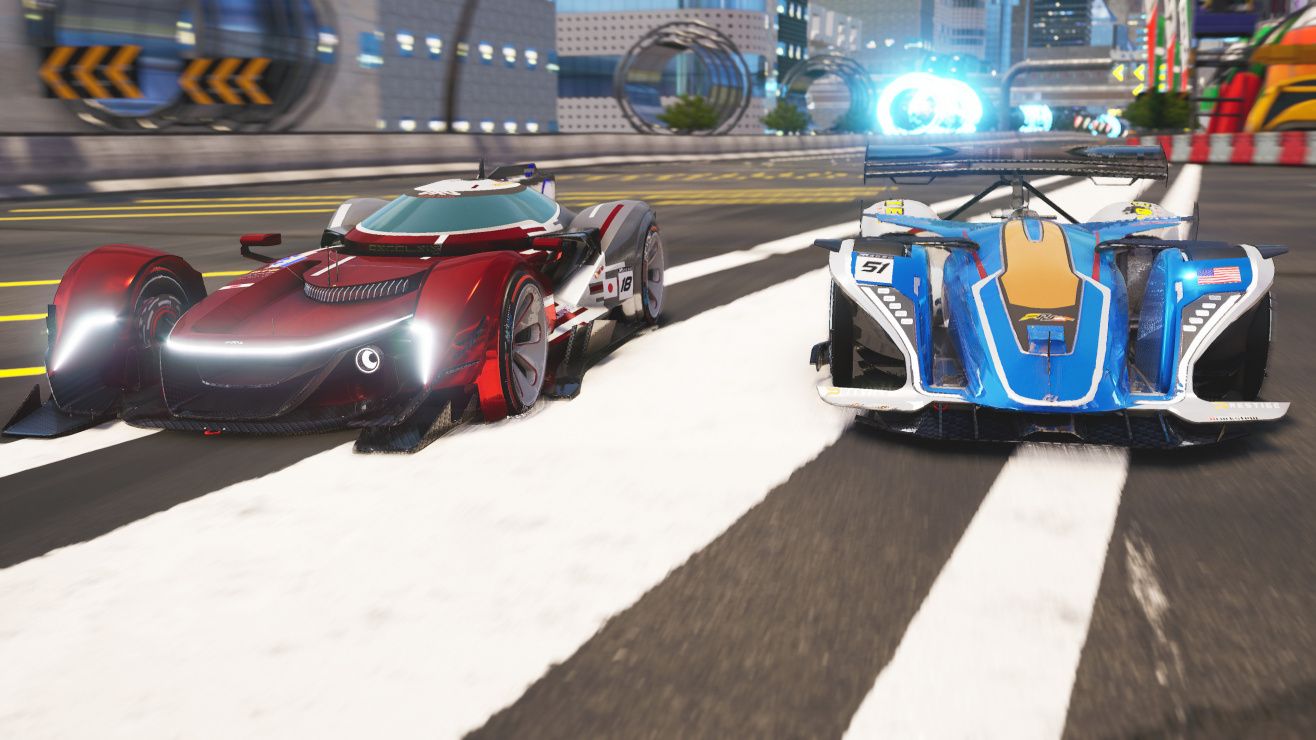 PC Steam Console Playstation action Xbox indie multiplayer sci-fi arcade racing sports
In the near future, the official racing federation has ordered a seasons pause from racing, to allow teams to ease into the transition to flying vehicles. To bridge this gap, top hybrid car manufacturers host a rogue championship for rookie drivers on the streets of cities worldwide. Their advanced cars drive on electricity and Xenon gas, resulting in crazy speeds. Get behind the wheel, keep your adrenaline in check and drift through the streets. Boost to absurd speeds and become the ultimate Xenon Racer!
Share Share Share
Promote for 50G

Grade = C. Worth a buy, if you're skillful & enjoy drifting in the circuit. However, if you're beginner & want sprint & good races, don't buy it.
⚖️Check Scoring Scheme

THE UNIQUE:
💎 Eye candy graphic
💎 Split Screen
💎 Unusual drift challenge
PLAYER CHALLENGES:
💼 Require expert skill with no mistake in racing
💼 Must trigger drift to proceed the corners
💼 Able to have long hours to practice & master handling
💼 Love looping in circuit tracks
HIGH RATED FEEDBACK:
2019 Nov - 2020 Mar
🔧 If you're not drifting, you're not turning ➜ After update, is better but still happen
🔧 Drift activation is too harsh ➜ Some vehicle is good, some is worse
🔧 AI rubber-banding system ➜ it is not, but they never wait for you and gone very far away
🔧 The physic sometime is ok, sometime it doesn't ➜ After update, better now
🔧 Restrict 1st position to proceed ➜ After update, still the same
MORE INFORMATION:
Recommended Video Review:
Approximate File Size = 5.27 GB
Average Completion Hours = 12h - 16h
Achievement Completionist = 22h
Thanks for reading, if you found this helpful please 👍 then:
🔔 Browse more similar reviews and follow this Curator, or
🤝 Join our group to discussion future review format and layout
☹️ Make a complaint on this review ➜ Write here

Pretty great arcade racer. Reminds me of Ridge Racer. The drifting mechanics is pretty close to RR64's. Graphics are decent. Doesn't look current gen, but you shouldn't expect much from the price point.
One caveat is the CPU racers. The game is easy enough, and it's not too hard to get 1st place if you corner properly and use your boosts at the right time. But you'll frequently see the CPU drivers come out of nowhere and try to overtake you. The devs claim that the game doesn't have RUBBERBANDING but it certainly feels like it most of the time.

Xenon Racer is a racing game that feels tight and responsive once you understand the mechanics behind the wheel. It may take some time to get to the point of understanding, but once you do it's a blast. The drifting feels smoother than any other racing game I've played to date and this is unbelievably key to the game feeling fun to play. The negatives at a brief glance are that obtaining 100% in achievements is unreasonable due to sparse online play, the tracks don't directly inspire interest in obtaining gold in each track and the rewards for the harder achievements feel lacking.
I felt that there were certainly moments in which the difficulty ramped up (specific to upgrades in vehicles and rank/class) and that achieving gold in the time trials is barely possible without the full range of upgrades obtained by completing the story for upgrades and vehicles. I am unsure of whether this is a positive or negative considering this endorses playing the story races.
The game may not be as a polished a AAA game however for the 'arcade racer' genre it certainly hits a good percentage of the positives you would expect. The game can be frustrating at times, but once you get to know the tracks (and understand the drifting mechanic) they feel about fair; winning a race can feel great and well deserved. At the same time the game looks fantastic, there may be a somewhat limited set of options for customisation (visually) but this did not detract from what was on offer.
I feel that the online aspect is lacking (due to a lack of player base) and the online achievements do detract from the game however all in all I've had a blast with this. I've played approximately 11 hours, in which I've had a great time. I've completed all of the story and obtained all the vehicles and achievements, barring playing split screen (which apparently cannot be achieved by kbm and a controller attached, but needing 2 controllers - I assume, as I couldn't obtain it). It's frustrating that customisation options are hidden behind online achievements, as there are very few players online currently, this means I cannot access content for EVERY VEHICLE which frustrates me as someone that likes to obtain everything in a game.
I would recommend to any racing game enthusiast, with the caveats listed above.

Actual good game.
No Rubber-Banding. (It does seem like AIs get "slower" as soon as you've passed them for the first time tho)
Good customization and upgrade options. Nice looking graphics and good sense of speed.
Probably wouldn't grab it for the full price, but for 90% off... go for it. really worth it.

Futuristic cars
Cars that transform while racing.
Drifting at 300km/h
Challenging circuits
Challenging AI
Excellent Graphics and overall world setting.
Funny announcer.
Arcade for people who likes to drive like kamikaze, crazy speed.
I can't see what are the flaws of this game, is like Ridge racer, but better in all aspects.
Its MAD FUN
Bought it on sale for 2€, worth the 10€ price tag too.
BTW Everyone who complains about being too difficult, its just like everyother game u have to get used to it, i finished it already, gotta play with the car parts and every car to see which one belongs in each circuit etc.

This little racing game reminds me my childhood. It remind me Ridge Racer in particulary. It's well made and the graphics are good and the musics are too. They perfectly fit with the ambiance of the game and dhe customisation are nice. There is still some little things that could make the game perfect, like more track, cars, customisation ect. The only things that I don't really like is the physics, we feel like the cars weight 3 tones and some times the car wont drift, but hey, it still a very cool game ! In particulary if you like Ridge Racer games.