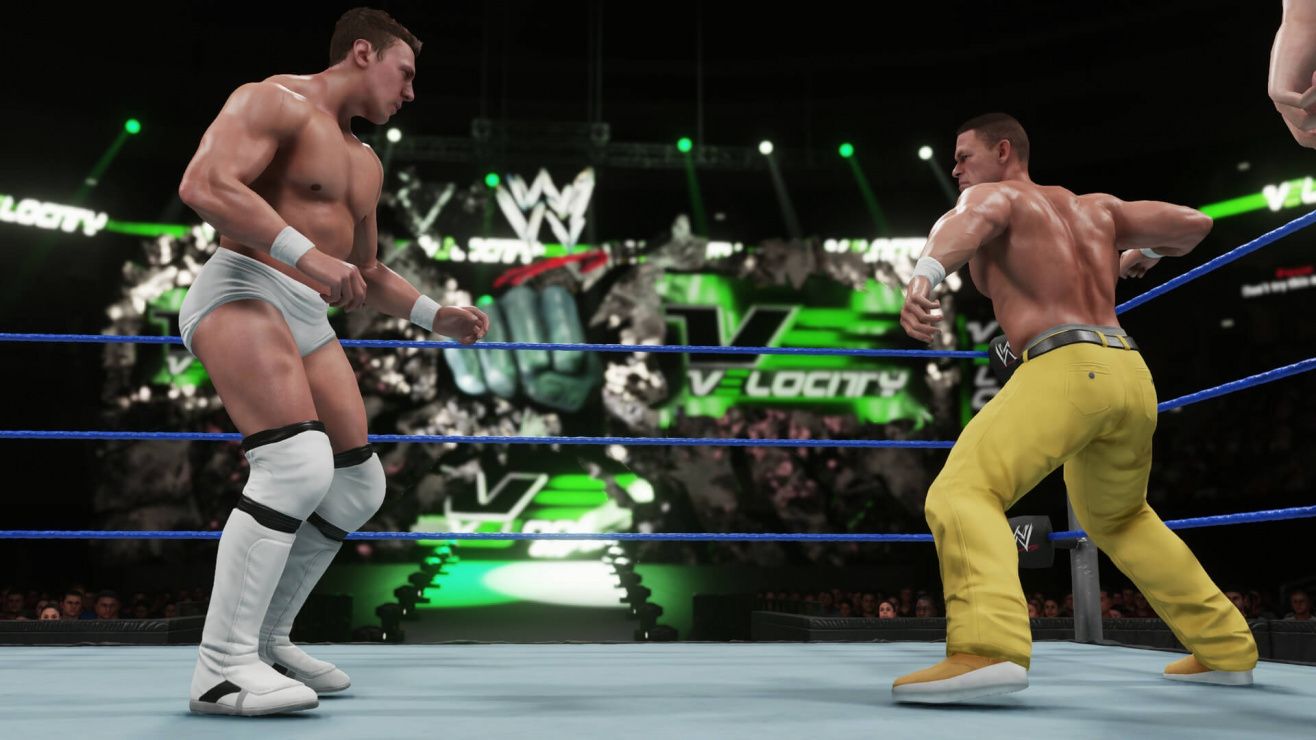 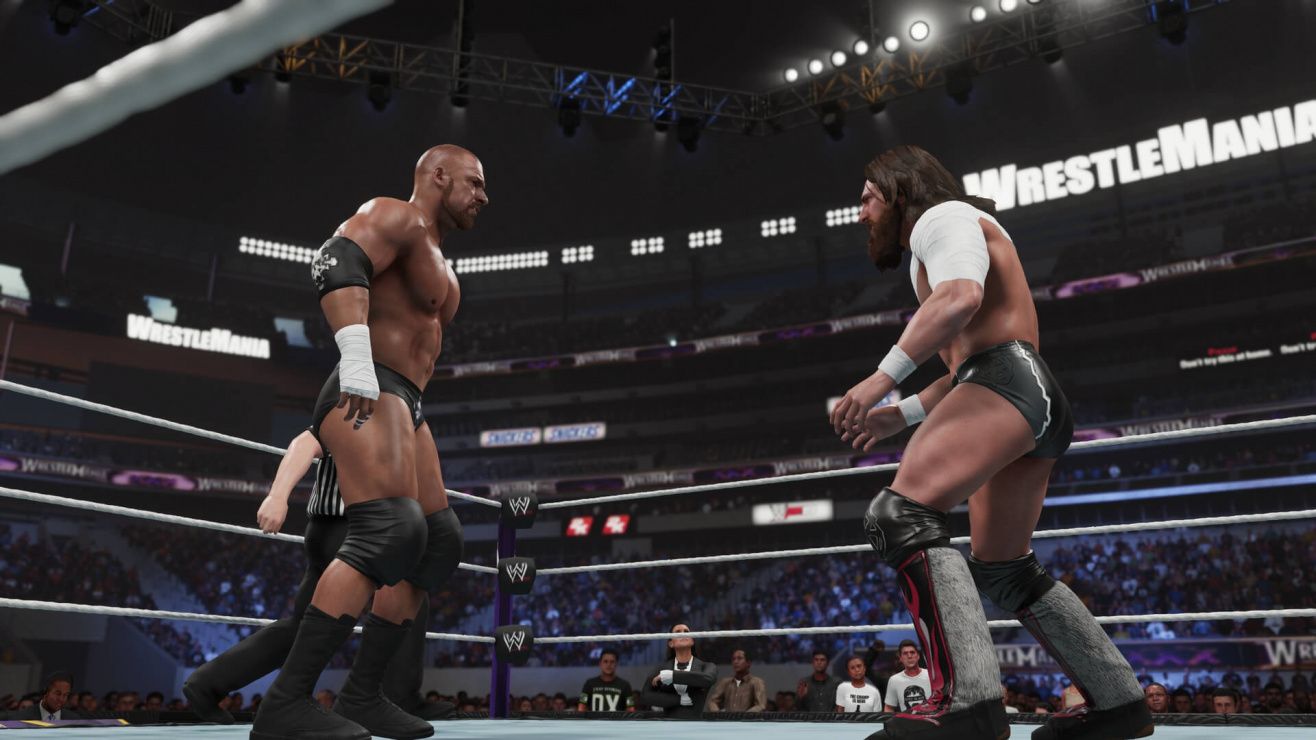 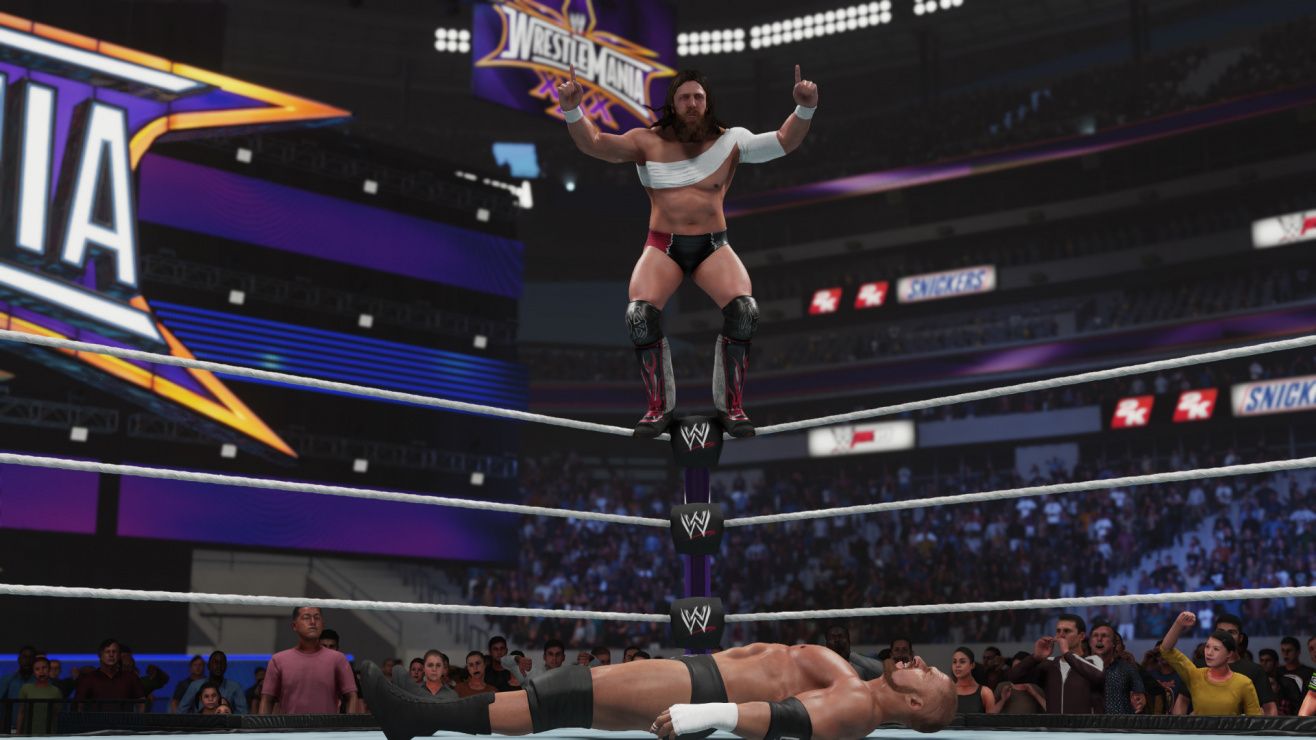 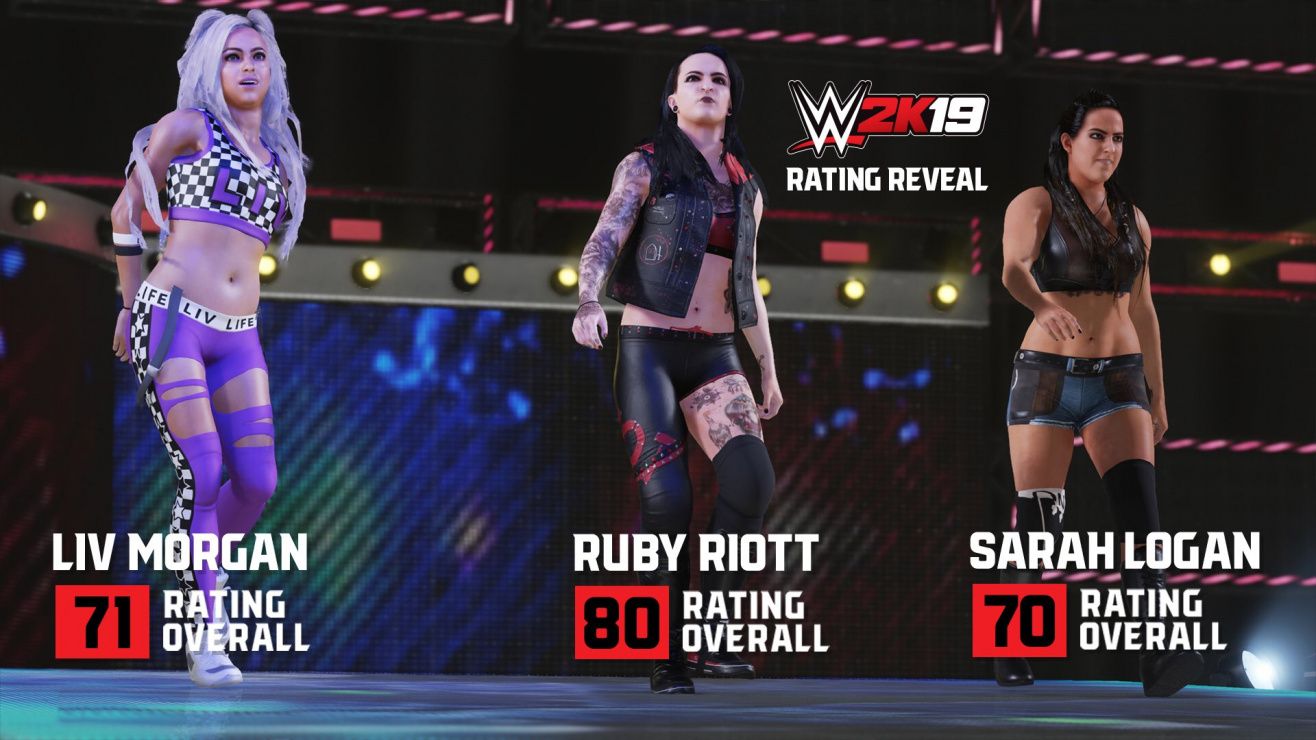 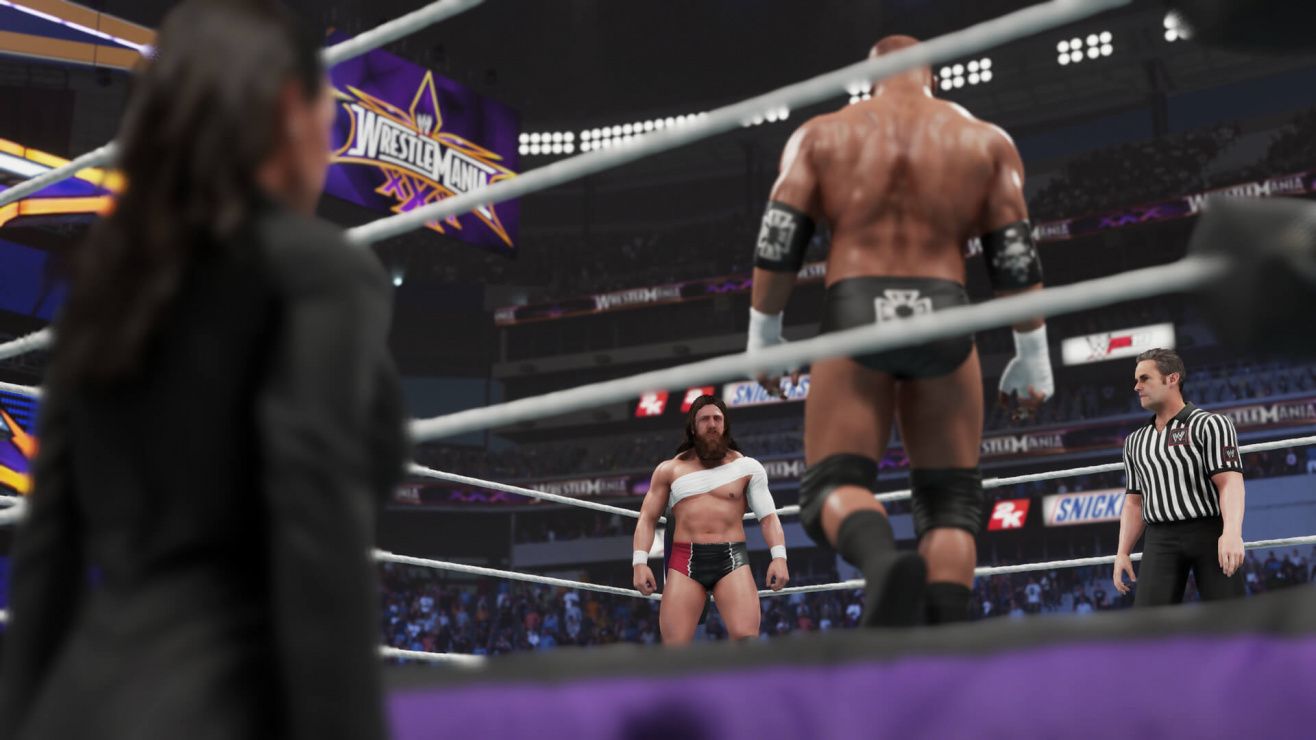 co-op fighting simulation singleplayer sports violence wrestling
WWE 2K19 arrives as the latest entry to the flagship WWE video game franchise and features cover Superstar AJ Styles. WWE 2K19 will showcase a massive roster of popular WWE Superstars, Legends and Hall of Famers, as well as NXT favorites. Experience authentic WWE gameplay, extensive creation options, engaging match types, fan-favorite modes and much more! Engage in the action through jaw-dropping graphics, heart-pounding excitement and thousands of new gameplay animations that enable you to experience WWE at a premium level. Experience high stakes matches, talk smack to your opponents and shape your MyPLAYER’s career path as you strategize your way to WWE glory. YES! YES! YES! Relive the incredible journey of WWE Superstar Daniel Bryan – from his career-defining moment in the main event of WrestleMania XXX to his heartbreaking retirement to a triumphant return in 2018 – all told through the words of Daniel Bryan.
Share Share Share
Promote for 50G

If you are considering purchasing WWE 2K20, I'd go ahead and just buy WWE 2K19 instead.

TLDR:
In comparison to the other WWE 2K games available on Steam, 2K19 is the "best" out of the bunch, though that isn't a very high standard. The game has a large roster of current, past, and legend superstars to play as. You can expect bugs and crashes sprinkled here and there that can potentially ruin your experience (e.g. crash during character creation and losing all progress). If you want to play a wrestling game on PC, your best bets are either WWE 2K19 or Fire Pro Wrestling World. Also, we don't talk about WWE 2K20.
GENRE:
Pro-wrestling simulation
GAMEPLAY:
Play out exhibition pro-wrestling matches as your favorite WWE superstars. Beat up your opponents with a variety of pro-wrestling strikes, grapples, diving maneuvers, outside dives, and more. Create your own wrestling shows with weekly events and monthly pay-per-views and simulate rivalries as if they were actually weekly televised productions. Create your own wrestlers, modify their movesets, and create your own championships to compete for.
With respect to titles prior to 2K19 (2K18 and older), 2K19 is mostly the same simulation gameplay but with the introduced Payback system where the more you get damaged during a match, the more your Payback meters fill up. Once filled, you can use them to regain the advantage by such means as automatically reversing the opponent's next attack, kicking out of an otherwise match-ending finisher, or cheating through usage of hidden brass knuckles. The Payback system is a welcome addition to the repetitive formula of the 2K wrestling games to make matches feel less one-sided and overall makes gameplay more entertaining which is always a plus.
GRAPHICS:
WWE 2K19 graphically looks the same as 2K18, but that is a plus since 2K18 improved pretty much everything from 2K17 such as lighting, character models, and cloth physics/textures. Most, if not all, of 2K19's roster looks like their real-life counterparts as a select few might look slightly odd (talking about you Ronda Rousey).
Arena and stage pieces look like they do from the real-life items in WWE 2018 televised programming. 2K19 fully introduced the mechanic of wrestler customized side plates for championship titles during entrances which improves the uniqueness felt by someone holding a championship.
STORY:
-There is a "Career Mode" present in WWE 2K19 that 2K took a chance with and, admittedly, was pretty entertaining. It focuses on your created superstar's rise up from wrestling in an independent wrestling promotion to eventually being scouted by WWE and offered a contract to work in the 'big leagues'. Somewhere along the way, things go wrong and your superstar's contract is revoked and it becomes a redemption story as you fight your way back to reclaim the spot taken away from you. Previous WWE 2K titles' career modes were pointless and lacked depth, so this was a noticeable improvement as an interesting story is presented for the first time.
-Otherwise, you can play the "Showcase Mode" for WWE 2K19 that recaps the incredible career story of Daniel Bryan, a man who wrestled for ten years prior to being signed by WWE, became the ultimate underdog story and won multiple world championships, retired in 2016 due to a career-threatening neck injury, and made the ultimate comeback in 2018 by announcing his return to the ring. The Showcase modes of 2K games are always of good production quality and it is fun to revisit the amazing highlights for Bryan's careers from the beginning to the present day (2018).
STRENGTHS:
-WWE 2K19, like most WWE games, has huge amounts of creation available in the various custom suites: create your own wrestlers, championships, entrances, movesets, victory animations, briefcases, match types, titantrons, etc. You can spend hundreds of hours just making whatever you want come to reality in a wrestling world.
-The roster of wrestlers available in 2K19 is plentiful and a fun selection. Also, their names haven't been butchered yet like in 2020 (shoutout to Andrade 'Cien' Almas & Mustafa Ali)
-Mods are an option for the PC version of 2K19 so you can mod in wrestlers from other promotions, replace arenas to look like their modern counterparts, or add ported movesets/animations from other games.
-Is not WWE 2K20
WEAKNESSES:
-Expect to run into bugs everywhere: double audio playback in Universe mode cutscenes, crashes randomly during various creation suites, and the rare save data corruption that could render all of your sava data useless
-Don't expect much from PvP content: you can be unfairly matched with players of higher level in "Road to Glory" matches, and overall players don't play PvP matches for the purpose of "entertaining an audience", rather they play with the express purpose of winning so expect cheesy tactics and maneuvers.
-The PC version of WWE 2K19's custom downloads suite is pretty inactive or otherwise very poor. If you want good-looking custom content like wrestlers, arenas, and championships, you're better off buying a console version of the game. The console versions of 2K19 are home to many great creators who make accurately-looking versions of custom wrestlers and arenas.
NUMERIC SCORE (if you care):
5/10 for non-wrestling fans
7/10 for wrestling fans
2K19 is the "best" 2K game on PC, though it is a pretty low bar to hurdle over. If you want to play a wrestling game on PC, either get this game or Fire Pro Wrestling World. Just don't get 2K20 no matter how low it gets during a sale.

Mods make this game even better. DO NOT BUY 2K20. Buy this instead, learn how to mod your favourites in it and it's fantastic.

Keep this one, not [email protected]