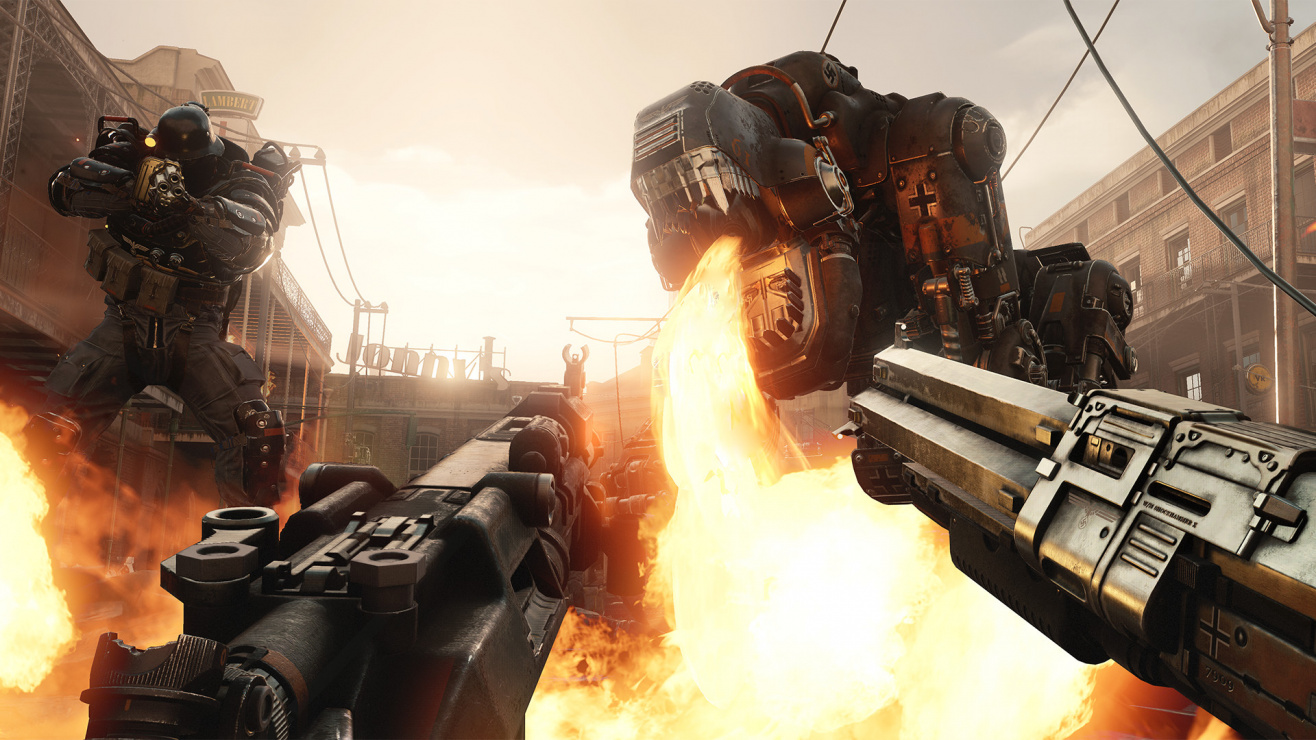 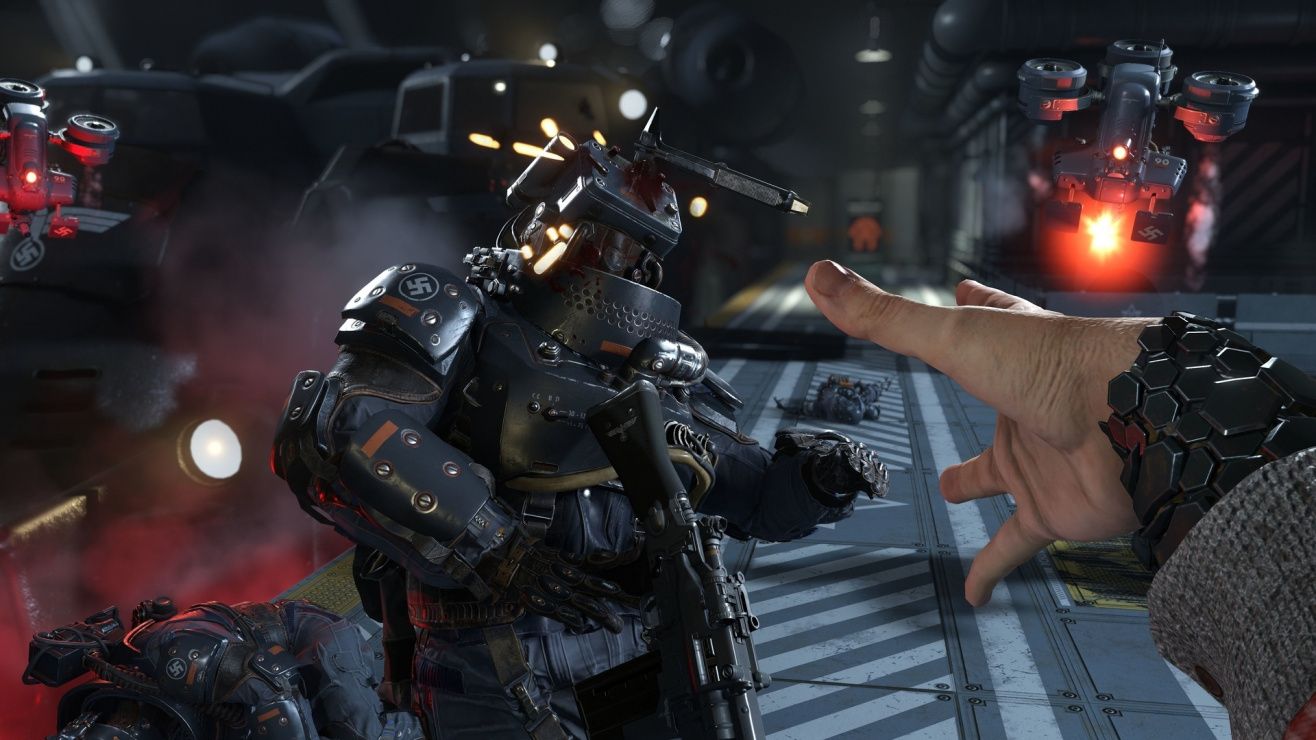 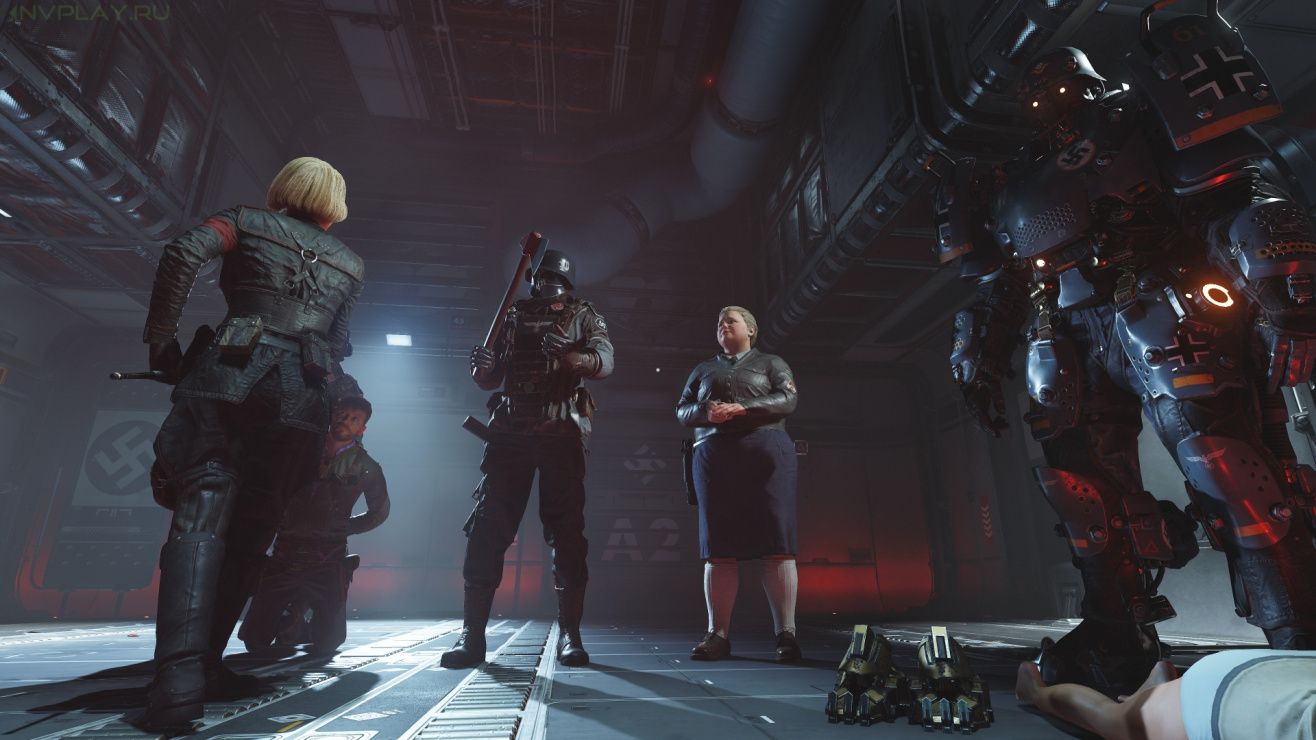 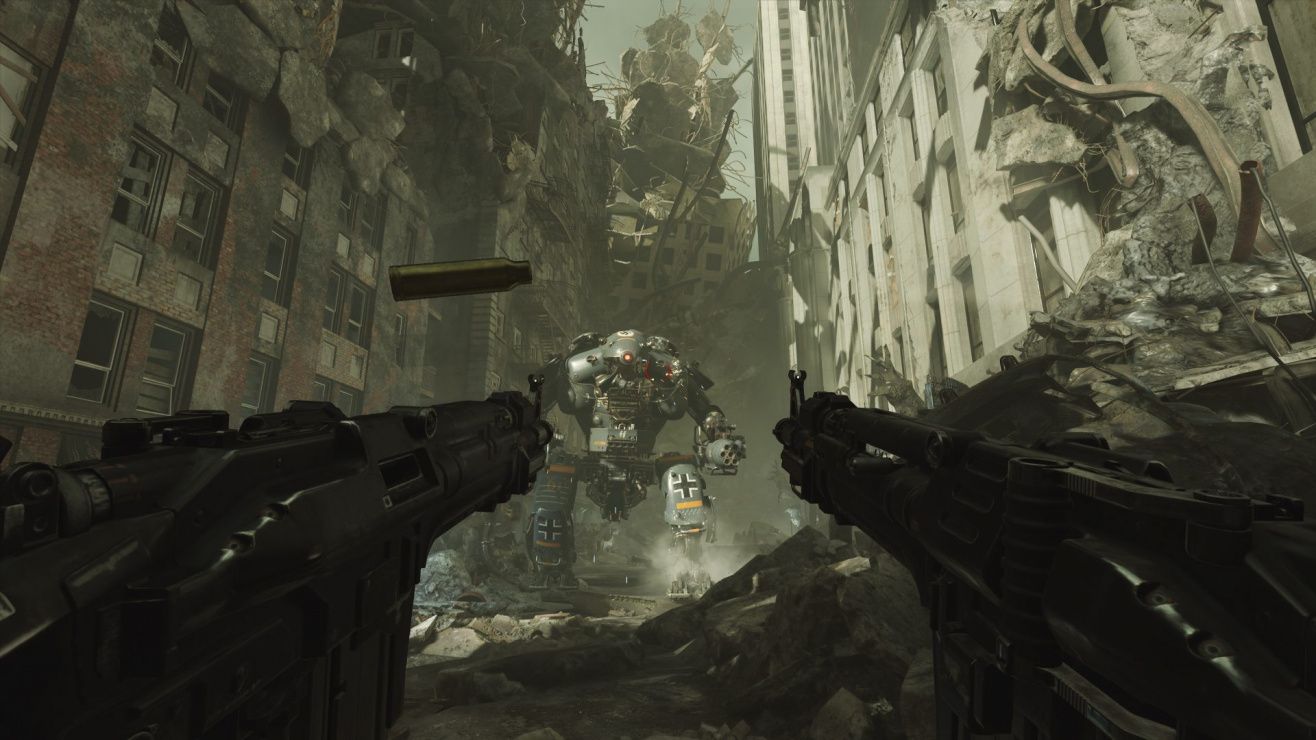 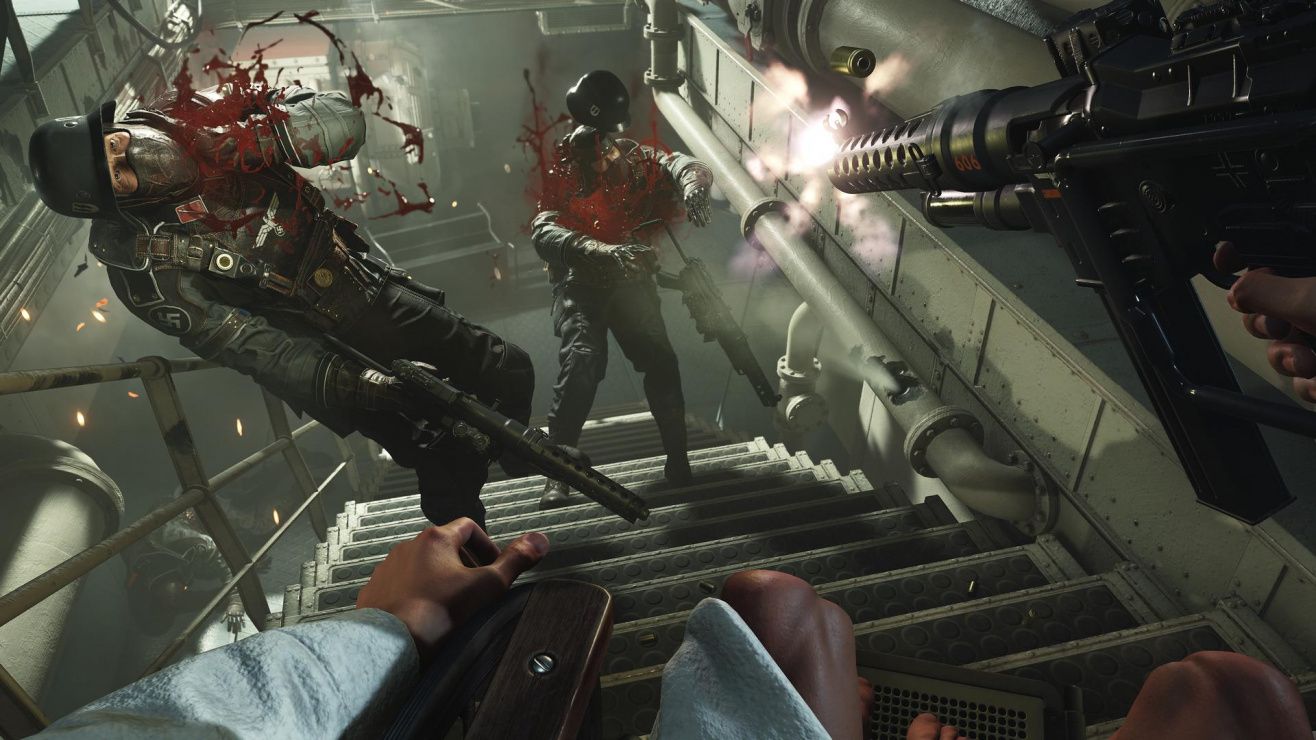 action adult adventure cyberpunk robots shooter story
America, 1961. The assassination of Nazi General Deathshead was a short-lived victory. The Nazis maintain their stranglehold on the world. You are BJ Blazkowicz, aka “Terror-Billy,” member of the Resistance, scourge of the Nazi empire, and humanity’s last hope for liberty.
Share Share Share
Promote for 50G

You can curb stomp old man Hitler, so I think I'm morally obligated to recommend this game.

Doom, but with Nazis instead of Demons.

Back in the '60s
Released 3 years after its predecessor, The New Order, BJ's story continues right after he rid the world of Deathshead. Well, this is not entirely true as he undergoes a life-saving operation first which requires him to recuperate for several months. The prologue immediately sets the tone for the sequel: BJ, now bound to a wheelchair, has to wake up and assist the resistance by fighting off Nazis at their new base of operations which is a submarine this time.
Doing a takedown in our wheelchair is as fun as it gets. We welcome back Frau Engel who is now joined by her obese daughter (for a short period of time, that is). Instead of Europe the focus will be on America - we visit locales such as Manhattan (this is the area where the atomic bomb was dropped) and look for new tech in Roswell (no, not in Area 51 but in 52!). The creators' favourite film is still Iron Sky but in order not to repeat themselves we go to Venus instead of the Moon this time.
Familiar game mechanics
Not much has changed here. Dual wielding is still a good way to kill many enemies in a short period of time. We have some new guns, of course, and collectibles now include looking for upgrades for our guns. The upgrade kit is not for a specific weapon - we decide which one we wish to use it for. I recommend that you add the suppressor to the pistol so that you can make your stealth approach significantly easier.
By playing in a varied way we unlock perks and we can also upgrade these (all come with additional ranks). The difference from the previous episode is that this does not come in the form of a skill tree - you don't have to complete one to unlock another. The system now is way more streamlined. Some items are missing but this is story-related.
Semi-open world approach
I played this episode almost twice as long as I did its predecessor. This is partly due to the fact that we now have additional DLC campaigns instead of having a separately released expansion title which was Old Blood in 2015. The second reason for this is the Enigma Machine introduced by the developers. By eliminating enemy generals we can collect their punch cards (referred to as enigmas). Then using the aforementioned machine on our submarine we can complete a minigame to unlock locations for Übercommanders. These are generals (a bit stronger, though) whose death cards are part of the many collectibles we have in New Colossus.
The game basically unlocks the previously completed stages that are once again populated by enemy combatants. There is no story here (no cutscenes); it's all about finding the commanders and looting their dead bodies. Some of the other collectibles we can only find on these levels as some offer new sections we previously didn't have access to. Employing this machine is an interesting concept; not necessarily original but we can always return and do some murdering in order to acquire the highest level of those nasty perks.
Themen und Drama
I liked the story and the new characters offered by the sequel. Some of them are simply unforgettable: there's Grace who looks like Pam Grier - a very strong African-American leader BJ recruits from their hiding location in the Empire State Building. His partner slash husband, Super Spesh, is a crazy conspiracy-theorist who believes in aliens. The cutscene taking place in his diner in Roswell is one of the best New Colossus has to offer.
There is more emphasis now on the crew Blazko has as part of the resistance. The main group is still relatively small but there are a lot of others we can talk to at the base and for some reason the creators decided to pick different nationalities here - the crew consist of French, Italians or even Finnish. It's worth listening to their discussions - we might get an extra side mission we have to complete here. I also liked listening to the various accents they have.
One of the main criticism against the sequel is the nonsense story it has. It has its unrealistic moments while at the same time it tries to be really funny. With Grace and her crew the creators introduced the counterculture of the '60s (hippies!) but I think it is too early to have them here. Also, enemies now include dogs shooting lasers from their eyes (simply called Laserhund) or the ÜberSoldat that looks similar to a T-800 robot from the Terminator franchise. Only several months have passed, yet, it is as if technology advanced by a decade or two at least. But hey: you can take down Arnold with just a press of a button! How cool is that?
There is a lot of cutscenes showing Blazko's past; the time he spent with his abusive father while growing up in Texas. His dad, Rip, is given voice acting by Glenn Morshower - he is a regular when it comes to roles of senators, colonels or other high-ranking officials in US blockbuster films. Fans of Battlefield 3 will immediately recognise his voice. The voice acting for Hitler (no, not a spoiler, he was in the trailers) is also top-notch!
Zusammenfassung
I had fun with the next instalment of the new Wolfeinstein franchise concocted by MachineGames. There's no multiplayer, no coop just pure single-player fun with lots of shootouts all taking place in a retrofuturistic era. It has great characters and a solid story (minus some of the nonsense technological approaches) and proves that it's still a great pastime using those machine guns in dual-wielding mode.