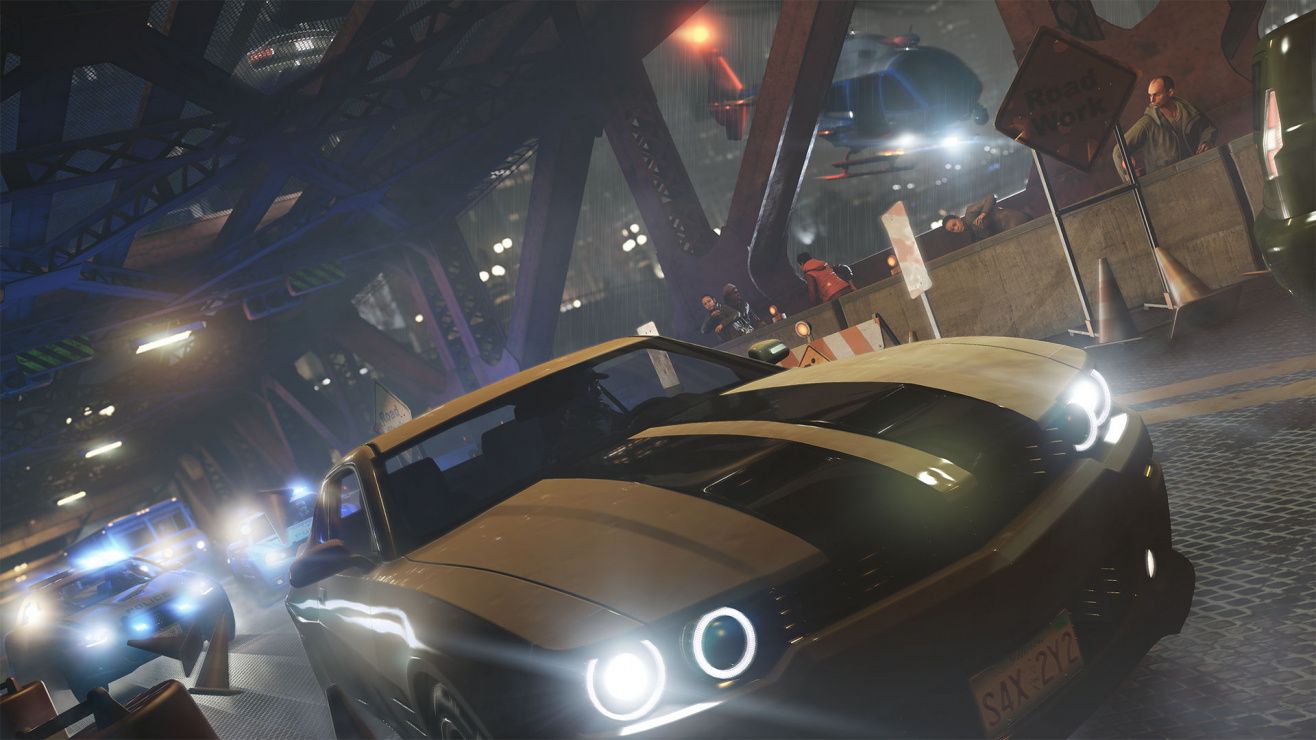 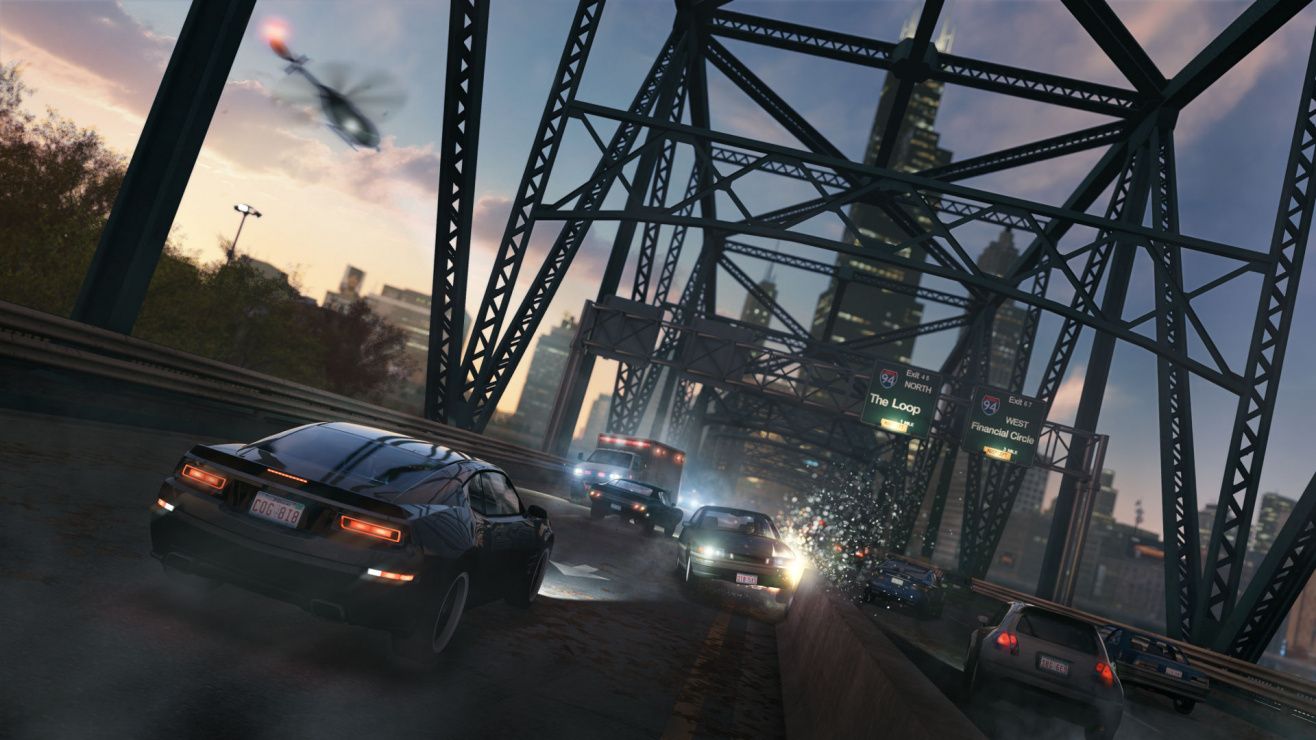 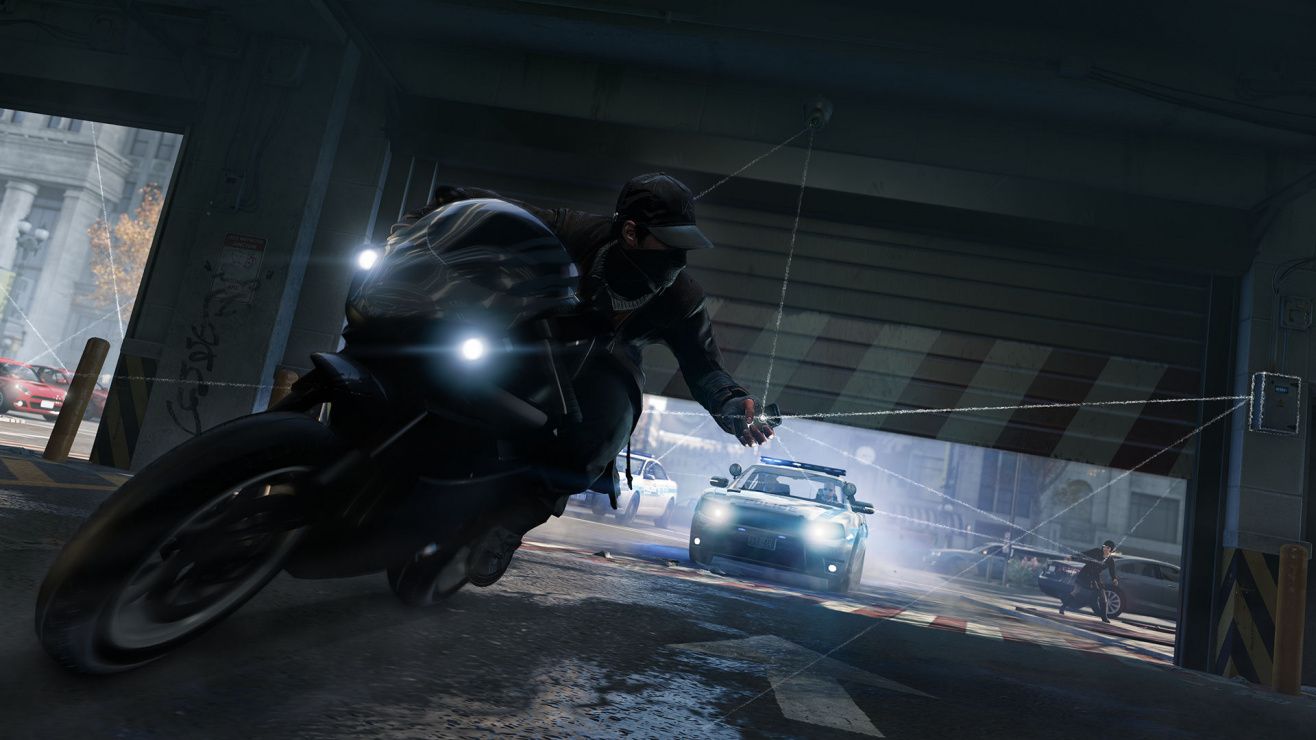 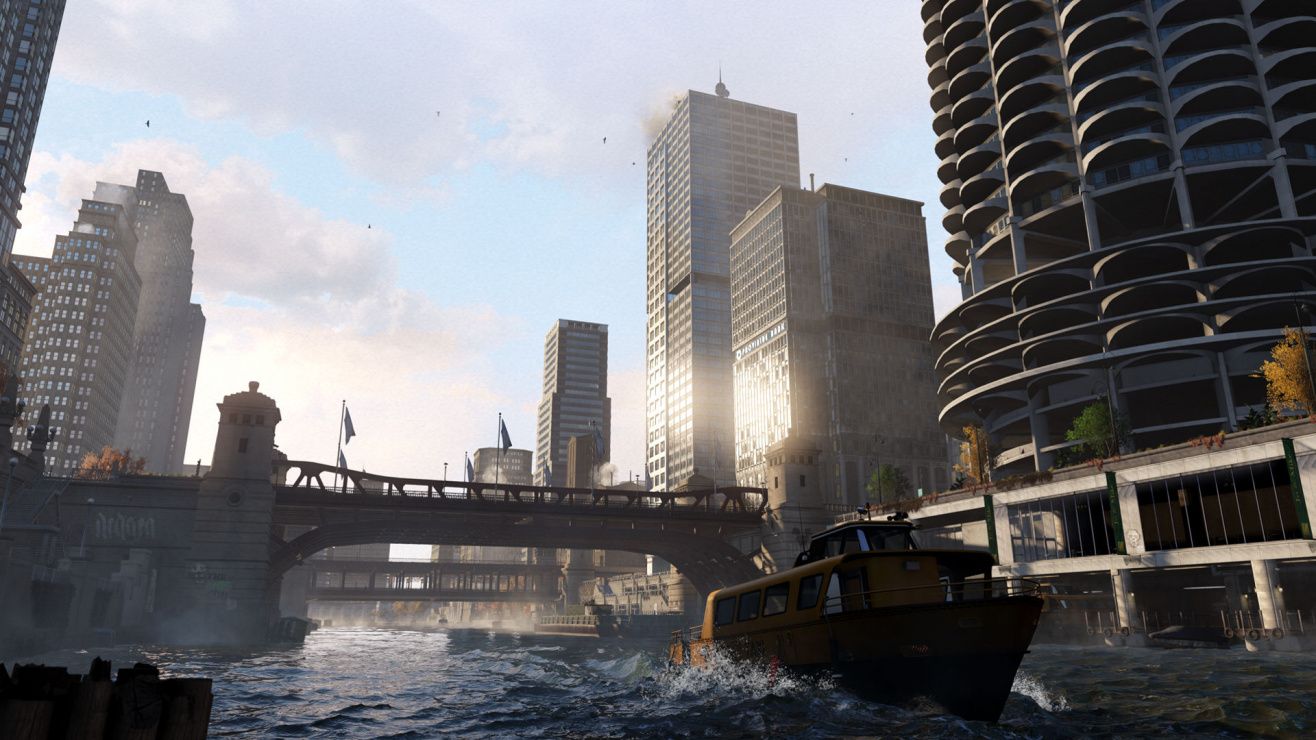 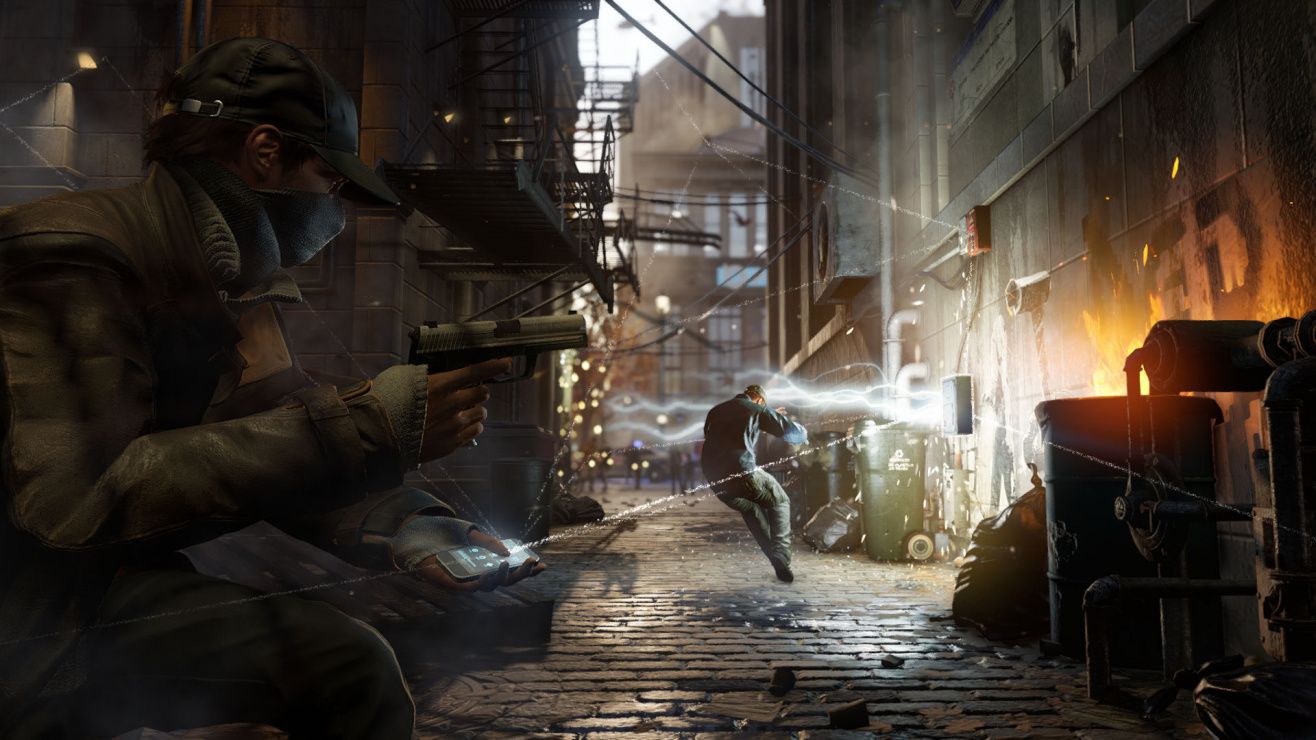 action adventure crime hacker stealth story
The storyline of Watch Dogs explores the impact of technology within our society; bringing to the forefront the concept of information warfare, data being interconnected, and the world's increasing use of technology — questioning who exactly runs the computers they depend on. The game is set in a contemporary fictionalized version of Chicago, Illinois, which is one of many cities to feature a supercomputer known as CTOS (Central Operating System). In this version of Chicago, everyone and everything is connected. The city's overarching network controls almost every piece of technology in the city; banks, security cameras, traffic lights, communication hubs, and even key data on the city's residents and activities have been complied into the system and can be used for various purposes. In the game's universe, the Northeast blackout of 2003 was found to be caused by a hacker, prompting the development of CTOS.
Share Share Share
Promote for 50G

I think this game is more memorable than the second game. Don't mind me, it's just my opinion

This might be an unhelpful review because I played this game's sequel before I played this one.
This game isn't as fun as Watch Dogs 2. While playing in the open world of Chicago is fun, and there are plenty of side missions, I do think the side missions can get a bit repetitive and you can't interact with the open world without things like side missions or collectibles, really. For instance, you can't punch/assault random people - only marked enemies the game wants you to take down. You can hack a lot of people, but not everyone.
Still, the story for Watch Dogs is far superior to its sequel. I wouldn't say Aiden Pearce is likable or charismatic, but you at least understand his motivations and hope he will succeed. There are plenty of turns that will leave you wanting to see the game through to its conclusion. In general, the hacking element is interesting and this is a good game, just not as fun as the sequel if you like messing around and playing outside the main story, like I do.
I liked it enough it buy the expansion where you play as T-Bone, so that says it all. I've definitely played worse games and regretted buying them, but this was a solid purchase.

10/10
Wow this game blew me away, When I started playing it I thought it would be terrible but it turned out to be amazing I would highly recommend this game

Y’know, Watch_Dogs gets a lot of undeserved shi t, and I don’t stand for it. I thought I’d use this review to break down my perspective on some of the criticism that the game gets.
GRAPHICS
When it comes to gaming screw ups, the phrases Watch_Dogs and E3 demo go together like rats and peanut butter. At first glance, it looks pretty bad. Ubisoft advertises a game at E3 with what looks to be next-gen lighting and graphics, then ship a game that’s a shell of its former E3 demo, hoping that the consumers would be none the wiser. The truth, however, is not that simple. In reality, the game was downgraded to compensate for a lack of performance on consoles. (Consoles dragging down PC gaming. What else is new?) The game can be restored to its former glory using mods that revert the game to the E3 demo mode, or you could just use other third-party mods to make the game look even better than the E3 demo. The two that I would personally recommend would be TheWorse Mod, which just re-enables the E3 demo graphics, or the Natural & Realistic Lighting mod, which makes the game look better than most modern-day AAA titles. I’ll leave a link for both of these mods at the bottom.
DRIVING
I will admit, driving was a bit rough the first time I tried it, but it’s still not bad per se. It just takes some getting used to. However, while the driving wasn’t very forgiving, the terrain was. I’m not exceptionally good at driving in any game, but I never found myself crashing into telephone poles or walls. This was because almost every poll, fence or object is destructible. This allows for a larger margin for error when cutting those tight corners, something that I found to be much more advantageous than just better turning mechanics.
STORY/CHARACTERS
I never understood all the Aiden Pearce hate. I mean, he’s a textbook badass done right. What is there to hate? He’s certainly more realistic than Marcus Holloway, and he’s a lot cooler too. As for the other characters, they all hit all the right notes. T-bone, Jordi, and Bedbug are all still some of my favorite video game characters of all time. As for the story, it’s good. I have a lot of games and a lot less time, so for me to finish a game’s story campaign, that means something. Throughout the whole campaign, which is about 30 hours, I felt that constant dopamine rush, the type that all games strive to achieve. Without spoiling anything, the story is a complete package, with a clear exposition, a solid conflict, and a satisfying conclusion. It feels well thought out and well-executed.
HACKING
Hacking in Watch_Dogs is done perfectly in my opinion. It’s a hard balance to hold, too much hacking and it takes away from the open-world sandbox aspect of the game, but not enough and it feels like yet another GTA clone with a gimmicky feature to try to differentiate itself from all the other AAA titles. Ubisoft just hit it out of the park here, creating an open world sandbox game with a twist that completely shakes up gameplay. Some of the missions that more prominently feature hacking such as the prison mission are some of my favorite memories playing games of all time.
MISCELLANEOUS
The skill tree is pretty much perfect, no skill seems useless, and none seem too overpowered either. The soundtrack, while not particularly memorable like Payday 2 or Hotline Miami 2, was still very enjoyable from an audiophile perspective. The gunplay felt very good, the recoil felt solid, and headshots felt impactful. The reputation system was a cool and well-executed concept. It served the purpose of incentivizing normal players to act like decent human beings. Unfortunately for the NPCs of Chicago, I’m not a decent human being normal player. I like to run over civilians for fun. (Yeah that’s right William. F u c k you and your pacifist bull s h i t)
CONCLUSION
Watch_Dogs is a gem of a game that fell victim to the hype train that has killed so many past titles, most notably No Man’s Sky and probably will end up killing Cyberpunk 2077. Once you look past the minor bug here and there, the game is still a great buy. I seriously can’t recommend this game enough, especially when it’s on sale for around seven to eight bucks.
TheWorse Mod
Natural and Realistic Lighting Mod

In Watch Dogs you step into the skin of Aiden Pearce, an experienced hacker. While hacking a hotel, there appear to be a another hacker in the computer system and he is no longer safe. Shortly thereafter he is attacked in his car. Aiden survives, but his niece dies.
That is what the entire story mode is all about. Aiden wants to find out who is behind the attack and why they want him dead. Of course there is a lot more to it, because Aiden comes across a number of both new and well-known people who are completely ruining his life.
You can't say Watch Dogs is renewing the sandbox genre. Watch Dogs is a sandbox game in heart and soul. Ubisoft has clearly been inspired by games such as Grand Theft Auto and has devised its own approach. It is not innovation that Watch Dogs bring, but quality.
The shooting system works extremely well for an open world game. Even if you set the aim assist to the lowest setting, you can easily take headshots or aim at other limbs.
The hacking skills used by Aiden are incorporated in every aspect of the game. It doesn't matter if you are hiding in a corner, are in a firefight or cruising in a cool car, Aiden's mobile is always ready to utilize every hack in the book.
It is extremely useful in Watch Dogs to attack enemies from a distance. You can hack cameras to view a location from multiple perspectives and hack all kinds of objects. For example, you can hack the grenade, in the pocket of an enemy, for a nice detonation, you can make gas pipes explode or make an entire building go dark by deactivating the electricity.
Because of the hacking system, the action in Watch Dogs has a lot of depth. The beautifully designed city of Chicago is like an interactive playground where you can use all electronic systems to your advantage. And by collecting XP you can unlock more and more possibilities.
Watch Dogs is an ultimate hackers paradise full of depth and quality. The game brings little innovation to the open world genre, but there are lots of valuable improvements and additions. The in-depth gameplay ensures that Watch Dogs does not get bored easily and remains fun until the end.
THE GOOD
- Hacking works great
- Shooting system is almost perfect
- Nice and very stable
- Great multiplayer
- Fun mini games
THE BAD
- Story are predictable
- Little variation
9/10
DISASTER | BAD | MEDIOCRE | OKAY | GOOD | GREAT | AMAZING | MASTERPIECE
If you like this review, then please consider giving it a thumbs up. I've also reviewed other games that you might find interesting. If so please follow Top of the Chart.
Reviewed on: Win10 Home 64-bit, Intel i7, GeForce GTX 1050 Ti 4MB GDDR5, 8MB RAM