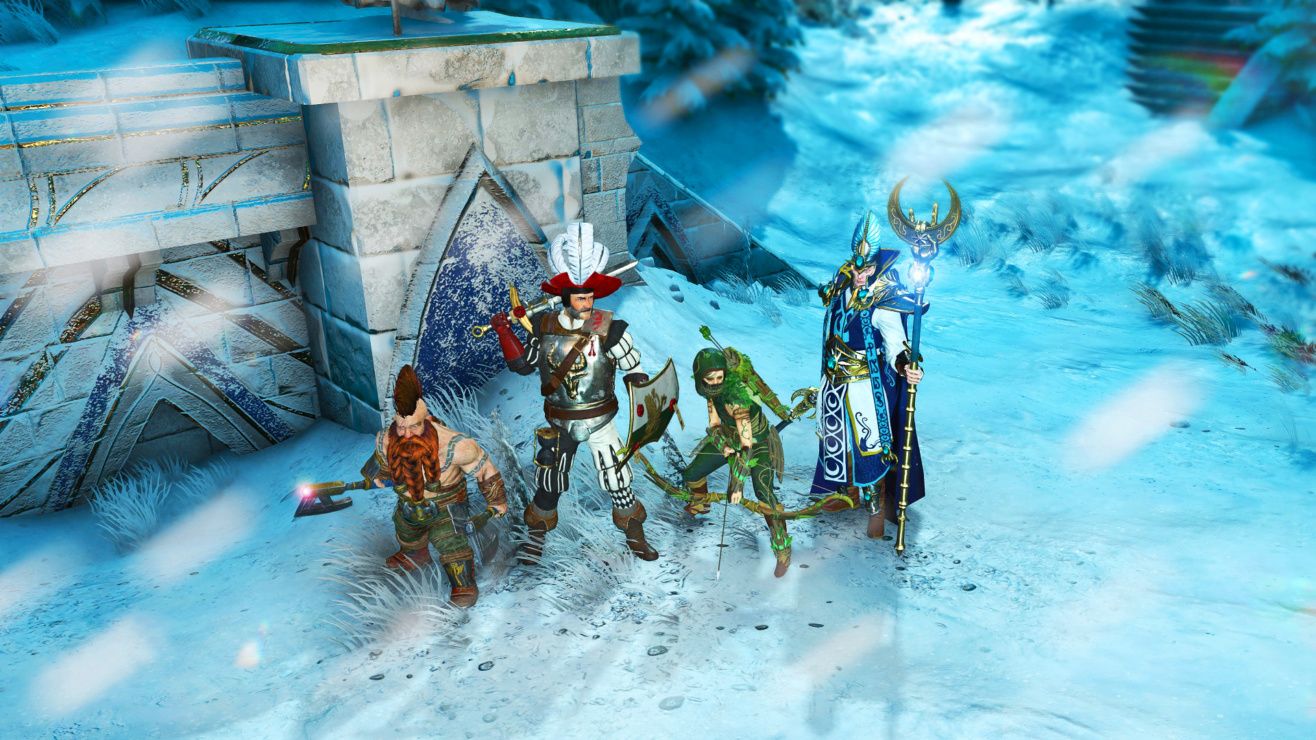 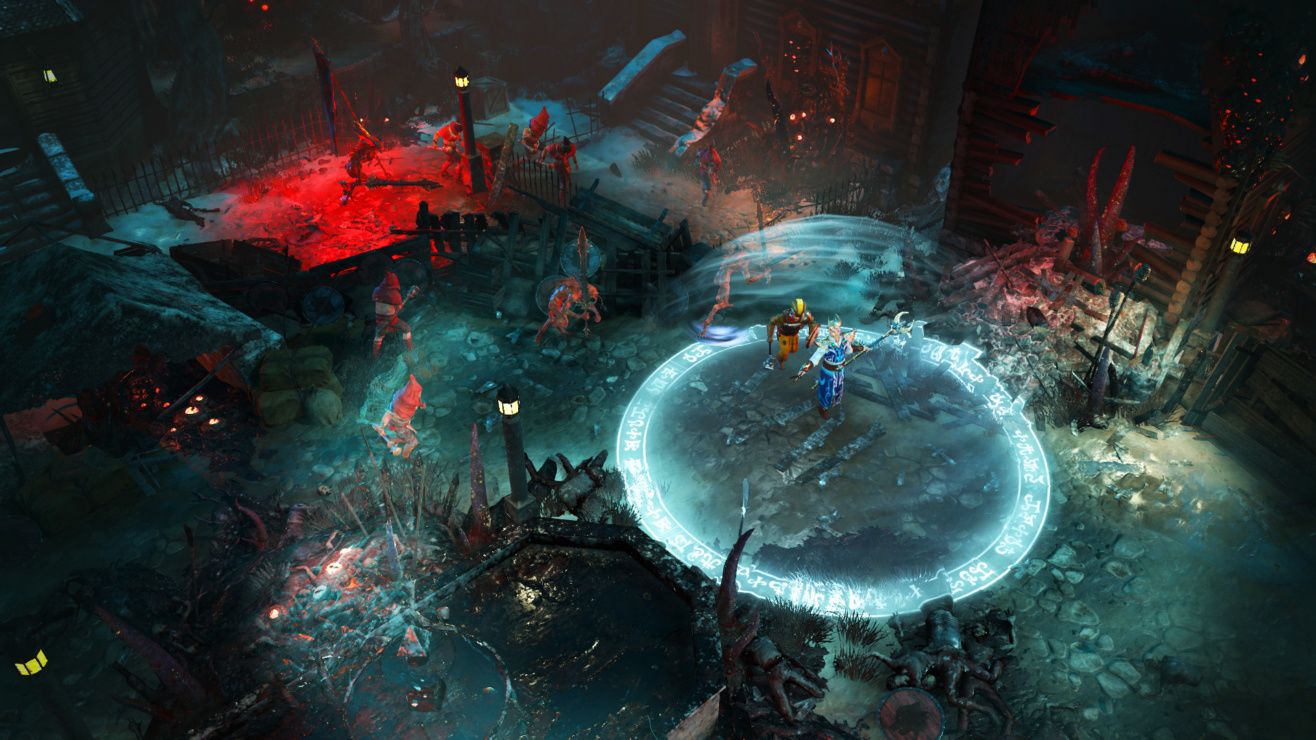 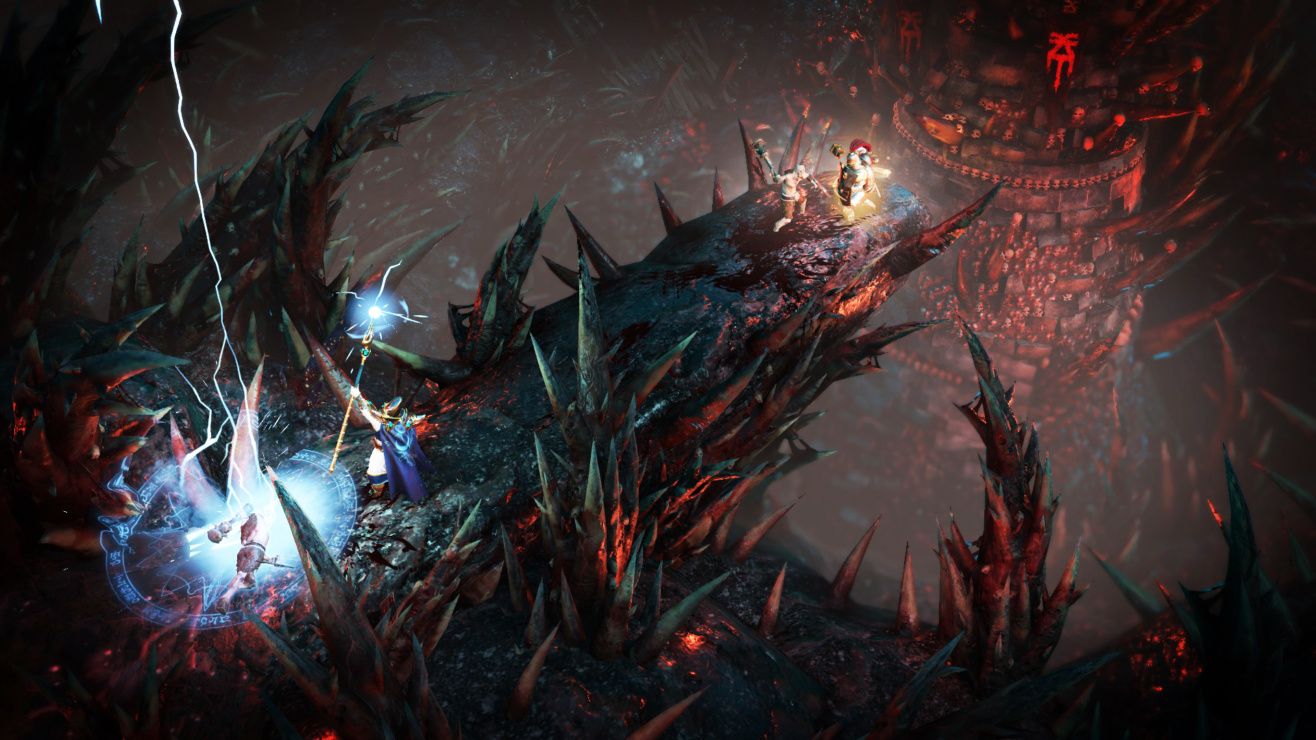 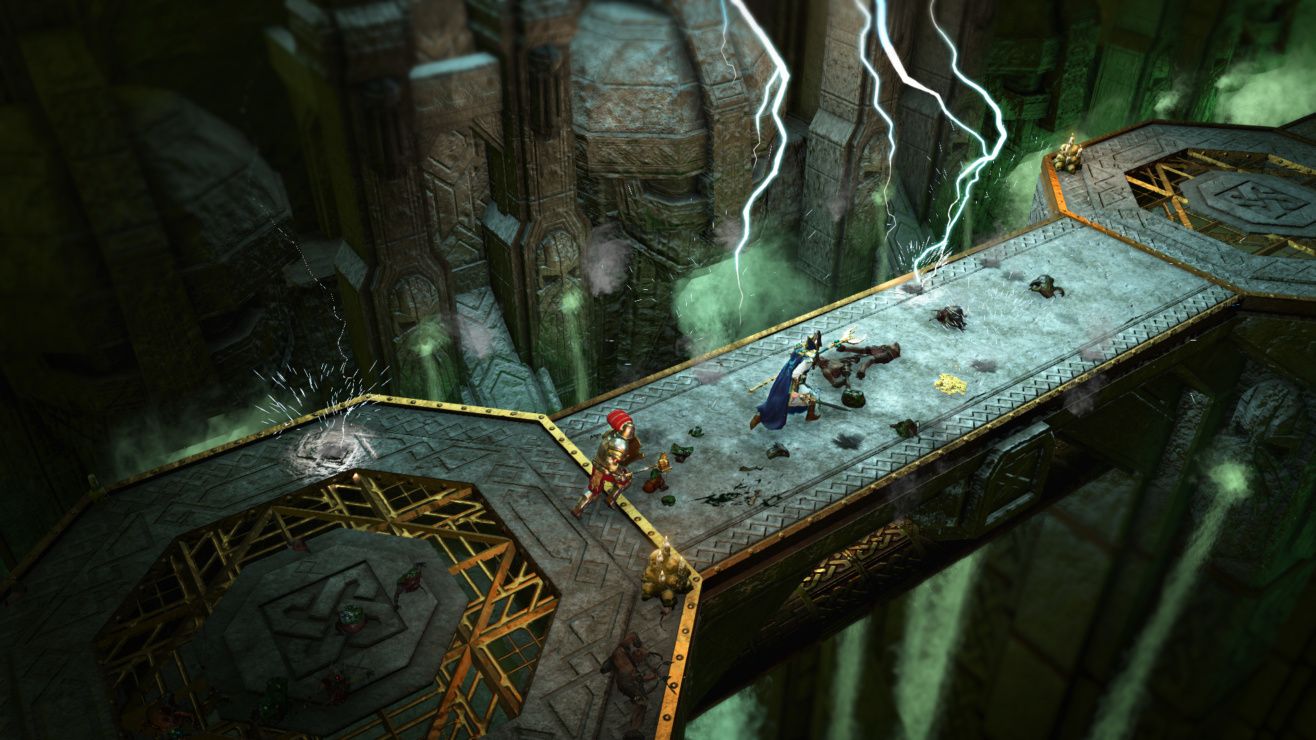 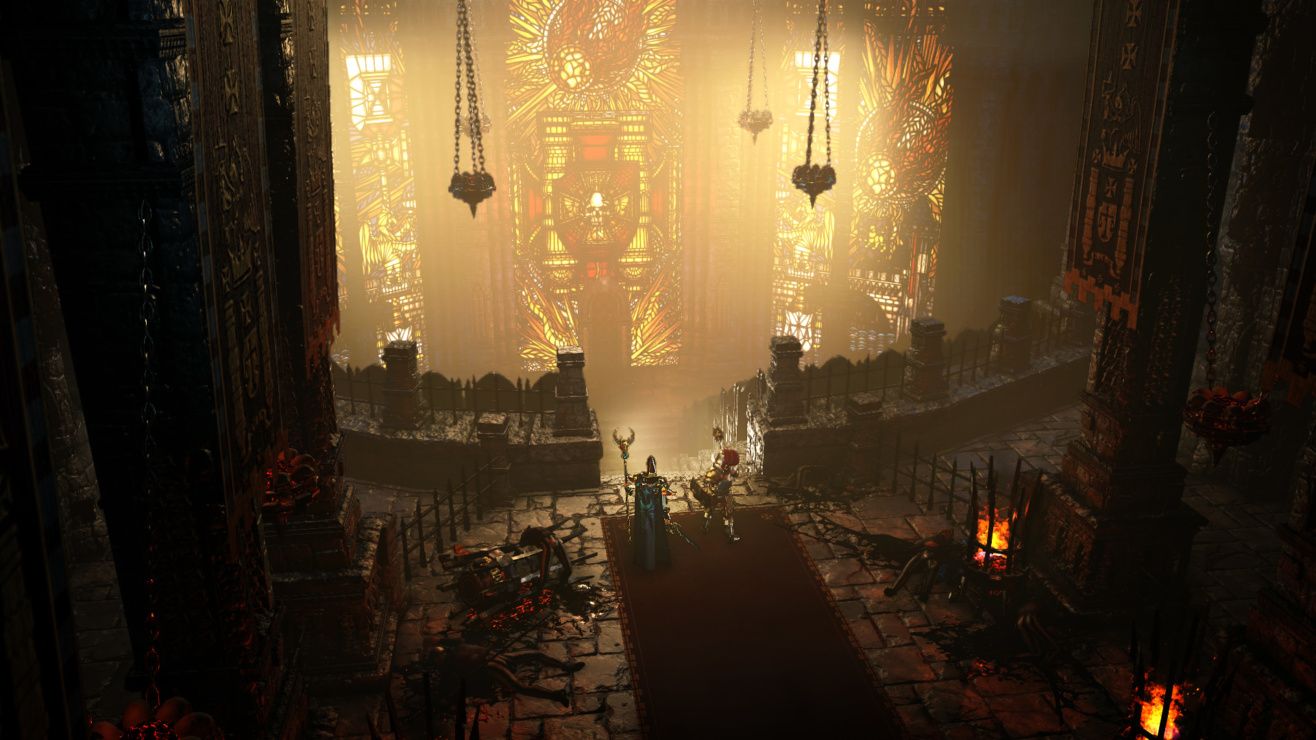 PC Steam Console Playstation Xbox action adventure rpg fantasy war magic combat battle slasher
In a world ravaged by war and dominated by magic, you are the last hope for the Empire of Man against the Chaos hordes. Playing solo or with up to 4 in local or online co-op, choose a hero from 4 character classes with unique and complementary skills, and prepare for epic battles wielding some of the most powerful artefacts of the Old World. • THE FIRST HACK AND SLASH set in the Warhammer Fantasy world, told through an all-new story written by Mike Lee (a Black Library author) and featuring a soundtrack composed by Chance Thomas. • FEROCIOUS BATTLES: from the sewers of Nuln to the ruined streets of Praag, fight your way through monster hordes using over 180 different powers. Activate your bloodlust, a devastating skill, to escape the most perilous situations. • 4 CHARACTER CLASSES, each with unique skills and customisation: a soldier of the Empire who can take heavy damage, a Dwarf specialising in melee combat, a High Elf who deals ranged damage by manipulating magic or a Wood Elf who lays deadly traps and wields the bow like no other! • AN XXL BESTIARY with over 70 monsters aligned with the Chaos Gods and unique bosses. Battle Nurgle's minions, Khorne's spawn and waves of other vile creatures!
Share Share Share
Promote for 50G

Not the best hack'n'Slash but not the worst too, get it on sale, but avoid it for the full price.

CONS
it's way overpriced.
BUT
If you were born before 2002,
AND
If you like good ol' warhammer fantasy (screw age of sigmar)
AND
If you like hack'n slash arpg isometric looter games
AND
If you like playing games without a rush
THEN
Buy this when it's on heavy discount

I originally bought the game on release, but refunded shortly after - it just wasn't worth the money.
After trying out the game again during the free-weekend event last month, I was pleasantly surprised by various changes, improvements and additions that were introduced into the game over the year. Despite its unsuccessfulness, the developers did not simply give up and continued to work on the game.
Don't get me wrong, it still has flaws and - in my opinion - is not worth the full price, but if you buy it at a discount I think you will get your money worth.
The fact that the developers did not abandon the game and still continue to release regular updates (both free and paid) gives me hope, and it is something I am willing to support.
This game has a potential. Let's hope that the developer's will not lie back on one's laurels now when the game finally starts to turn in the right direction.
Finally I don't feel bad for purchasing the game. It might change... only time will tell.

This game pumped out major updates after a year.
Most reviews is inaccurate if more than 6 months.
This review is on 6/4/20 after 32 hours of game play on Dwarf and Elf.
Dwarf is roughly 75% complete on endgame "green" set.
******************************
Quick Review : 8/10
Good Actual Game Play (10) + Too Short on Content (-2) = 8 *I personally recommend to buy on sale or wait for more content*
******************************
Long Itemized Review:
Game Play in Dungeon: 10/10
Very responsive controls. Very similar to ARPG such as D2, D3, and Torchlight. Fast and snappy controls.
Character Build 9/10 (high customization)
Items:
1) 4 character sets that enable skill based builds per character.
2) Additional offensive/defensive modifiers using mainhand/offhand weapons and jewelry
3) Additional offensive/defensive modifier using enchants on all pieces of gears
-1 because I feel game seems "too generous" giving out loots (I got full "red" set in about 5 hours of play. only 3 out of 5 set of best "green" tier after 32 hours of farming)
Char Skills / Passives 9/10
6 Active Character skills + 6 Passive Synergy Character traits + "God Tree" providing both flat passive stats AND said active /passive skill
-1 for slight confusing documentation on damage types on active skills and whether certain passive skills buffs said damage skills
Presentation of Content:
Story-mediocre at best, hand drawn slide show instead of CGI movie cut scenes, 5/10
Music-standard, 8/10
Voice-apparently reworked elf since old reviews, 8/10
Graphics-standard 8/10, middle of the pack, Plus if you like Warhammer style.
Content and Pacing: 5/10
Currently only 3 chapters (If you pay for additional chapters). Each "chapter" is short with about average of 5 hours per chapter.
I could empathize the early adapters rate the game low because of 5 hours of game play for a full priced game.
The game seems to recycles units, environment graphics , and map layout tile sets. Minor annoyance but not really a deal breaker for me because the actual game play is fun.
End game content has multiple formats:
1) Relic Hunts Map: single dungeon with optional penalty/reward modifiers (kill boss, loot chest)
2) Boss Rush: single story line boss encounter comes with game mechanics plus optional penalty/reward modifier
3) Invasion: multi tier maps with built in penalty and rewards at end nodes such as passive traits
4) Tower Invasion: linked maps that gets progressively more difficult for better rewards

I got this on sale during the Skulls for the Skull Throne event in 2020 after not buying this repeatedly when it was at full price upon reading reviews. I was pleasantly surprised, maybe because of all the content that has been added to the game since the apparently lackluster launch. Unlike something like Wolcen, this is a well put together ARPG with fun class design, cool sets, and some twists on the Diablo 3 formula with alternate play modes. Each class has a good identity and many interesting build choices.
One area I want to praise is how the skill system works. Unlike in Diablo 3 in which your set pigeon holes you into using a single ability (or two abilities) for damage and then a buff of some kind to spam so you don't die on higher difficulties, the sets in Chaosbane generally give you freedom to choose which abilities you want to use, whether you want to be a defensive/offensive/support character, and so on. You can build a character to accentuate the bonuses provided by a set or you can use the set to cover up the weak points of your build, such as using a tanky set on a full crit/critdmg/dmg build or a high damage set on a super tanky build.
For example, a wizard set will proc its effect if you cast any (arcane/fire) spell and buffs one ability to the stratosphere and makes it free. That means that if you want to be a firebreathing flamethrower, you can. Or you can proc your set effect with your arcane orb that you move around with the mouse. Or you can use bolts. Or you can set up kill zones with firewall, an arcane twister, and a knockback nova ability. If you want to make a beefy CD based character you can equip legendaries that boost your CDs and CDR without needing any passives related to energy. There is just a lot of effective freedom to build a character that is not present in games like D3 which really force you into a specific build and playstyle.
I understand that they are recent additions or updates, but they have sort of the start of a rift/greater rift dynamic with the Tower of Chaos and Relic Hunts. There are some janky or bare bones aspects of this game, but unlike other recent entries like Wolcen this is a very solid title. Although the plot is pretty sparse, it is very Warhammer-y as you teleport around the Old World crushing Chaos with Teclis. What the game is missing is seasonal play and maybe more items but I think the changes to this game have elevated it to 'underrated gem' status.

Well, this is tough. With more variety Warhammer: Chaosbane could have been much better.
What I liked:
- graphics, music and sound are OK. Nothing special, but game looks and runs fine. Also loading screens are nice.
- smart skill system
What I did NOT like:
- repetitive quests and maps. Like in Chapter I: go to the sewer, kill everyone in the sewer, survive the ambush in the sewer ... You should go to the same place over and over again.
- enemies are dumb, some melee attackers simply run around you without brain and they tend to stuck behind barrels.
- DLC's that boost XP and loot - that is close to cheating.
I give this game the thumbs up but my advices are:
- buy this game on a sale if you like ARPG's
- spend not more than 1 hour with it at one sitting