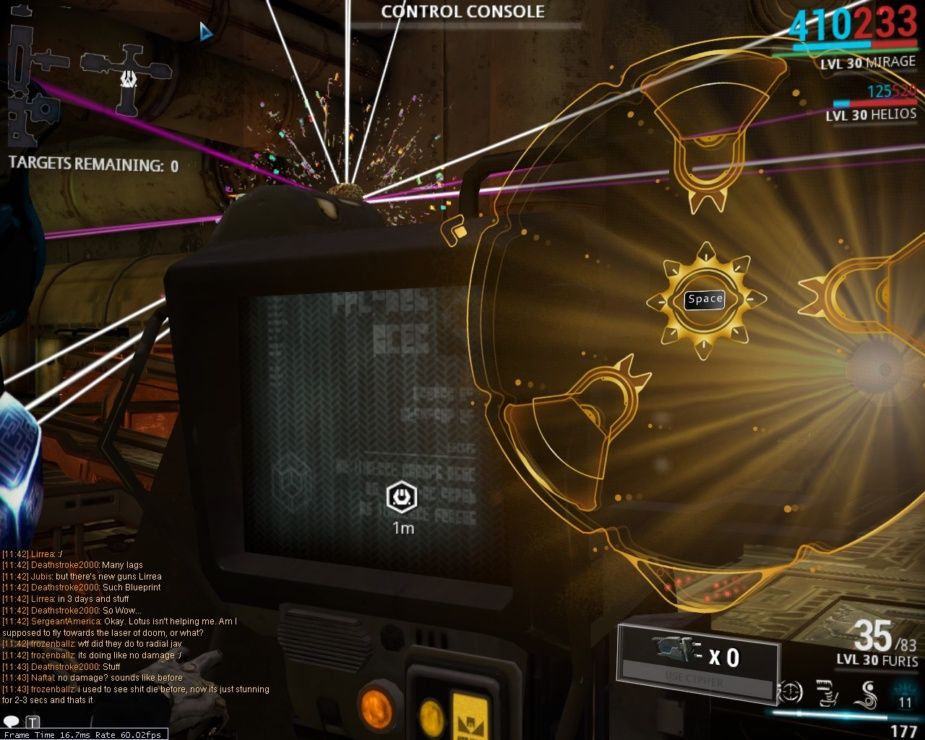 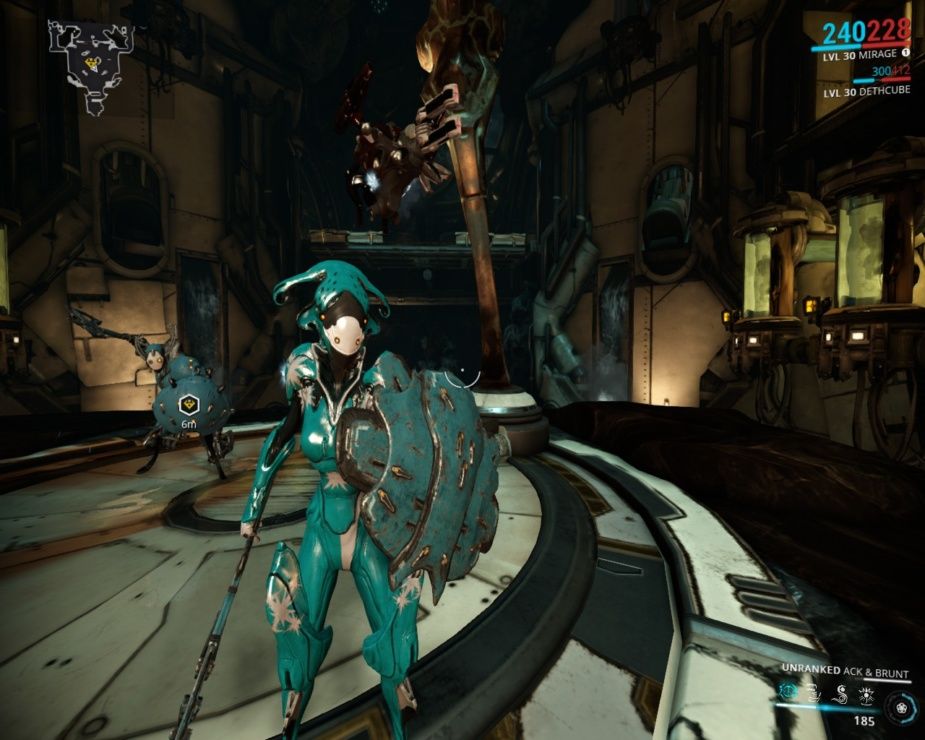 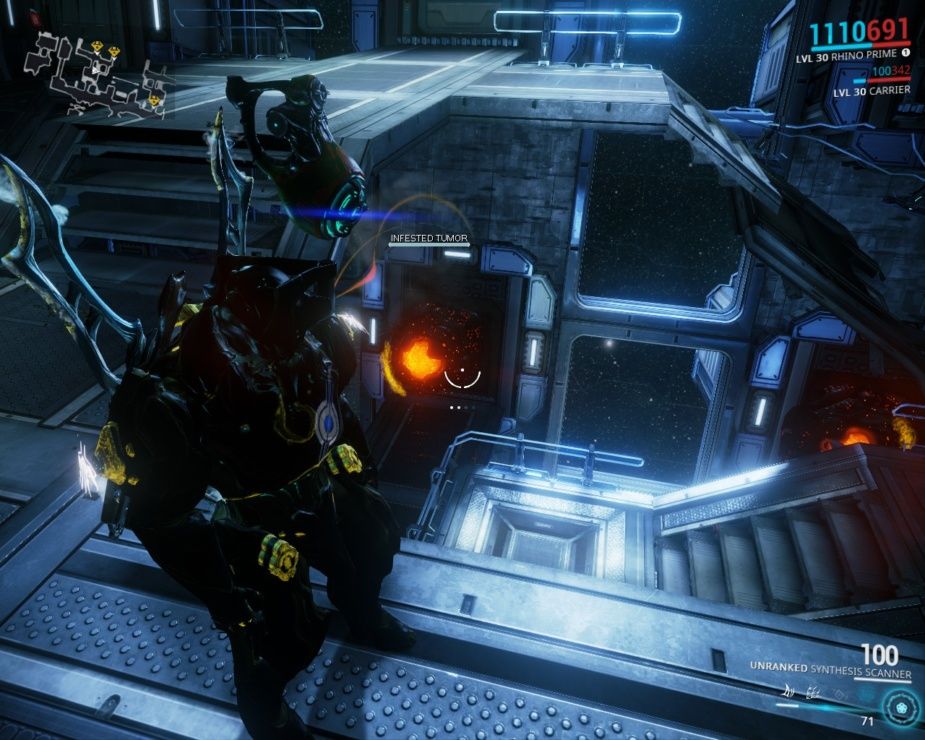 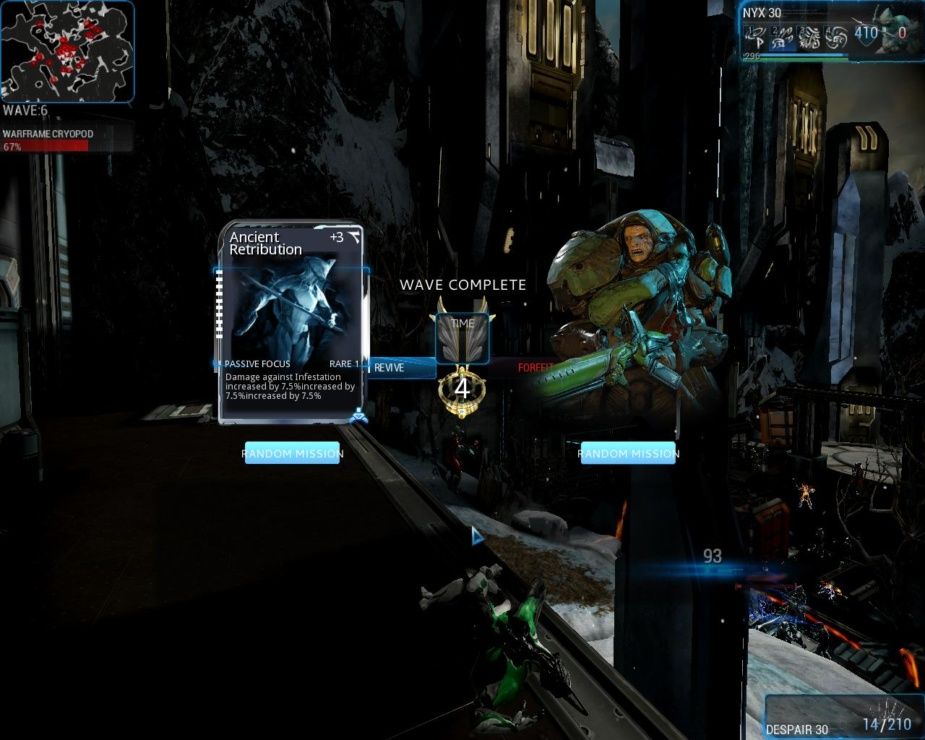 PC Steam Console Playstation action Xbox Nintendo singleplayer multiplayer sci-fi co-op shooter survival space fantastic
CHOOSE YOUR WARFRAME With more than 30 Warframes, each fully customizable with their own unique abilities, you can create the perfect Warframe for you. ASSEMBLE YOUR ARSENAL Katanas. Crossbows. Flamethrowers. Expand your Arsenal with more than 300 diverse Weapons, then modify each one to match your playstyle. EXPERIENCE FAST-PACED COMBAT Slice and dice through hordes of enemies, or go in guns blazing, or sneak your way in — the choice is yours. EXPLORE OPEN WORLDS Explore, discover, fight, and fly in massive open landscapes within Warframe. FLUID PARKOUR MOVEMENT Seamlessly leap, slide and glide through capital ships and underground compounds with a robust movement system. A SOLAR SYSTEM IN RUIN In the far-future world of Warframe, grotesque clones and capitalist machines dominate our solar system. Fight back against greed and corruption as you explore 18 worlds filled with techno-organic horrors. SQUAD UP You don’t have to work alone. Invite three friends or fight alongside the 38 million strong in our Tenno community.
Share Share Share
Promote for 50G

Get the Excalibur frame.
Spend your starter plat on frame/weapon slots
buy a shotgun with credits as soon as you can
Once you've inevitably gotten addicted to the movement and controls, pop open the Warframe wiki and look into weapon and frame crafting.
This is your life now.

Don't know how the hell i managed to rack up 3000 hours... I keep coming back when there are new updates, and have not uninstalled this game ever.
Some advice for new players:
1. DON'T overexert yourselves by grinding. E.g. if you've only been playing for a month or so, you shouldn't be grinding endo for rank 10 mods, nor kuva for RNG riven rolls. Gear progression isn't everything, and there is plenty of game content to be explored. I sometimes run level100 missions using excalibur and mk-1 starting equipment for the kicks, and its works fine because of my knowledge on mod combinations and how to deal with enemies. If you are a completionist, bad news... prepare for the worst ;)
2. What to spend platinum on: Prioritize using plat on increasing warframe / weapon slots. If you have extra, spend them on orokin reactors and catalysts for your favourite frames and weapons.
3. Trading exists, and can save you many hours of grinding. You can sell things you think are junk (duplicate relics, prime parts, mods and whatnot), but are worth much more for others, and buy what you need within minutes. You might need some time learning how to, but there are free tools like the warframe market website to help with trading.
4. "Press 4 to win" used to be a thing. Meaning, current metas will be nerfed to oblivion, and so will the next many. You do not have to follow min/max builds. Instead, try new weapons and frames to learn them, while making do with your current mods. That's what the mastery system is imo, learning which weapons and frames are better suited for different situations. If you leveling your weapons by afking in grineer defense missions, you're essentially throwing that piece of knowledge away.
5. How to get plat? : Sell your soul by grinding and/or trading. might shorten your lifespan by a few years. OR buy using real $ OR wait for 75% plat discount login reward and buy using $, which only appeared for me twice since i started playing.

4,741 hours on-record, and I realize I've never written a proper review for this game. I can't let that stand, but if I recount every good memory I have here, you'll have a 4,741 hour long wall of text. I thought about it and decided to boil it down to the things that hooked me from the get-go, and kept me going for that long.It is 100% FREE. Not "Freemium". You can use real cash here to enhance your quality of life, and enhance your looks, but you can hop in right now, make an account, and you'll be blasting scum and/or throwing shuriken at suckers within the first few minutes.EXTREMELY HIGH PRODUCTION QUALITY for being totally free to hop into. The world is gorgeous, your graphical options are plenty, and much of your world can even be colored and decorated to your desires! If you really wanna get some of that premium stuff but are broke, any schmuck can go farm valuable items to sell on the player market for premium currency. It's just that easy. Some hard work and capitalism can pay for your entire arsenal if you're dedicated.Dynamic, riveting, but ultimately optional storytelling. I adore the story, I love the mysticism, the intrigue, the sci-fi, the hours and hours of lore they've put into creating this world. But you can just shoot stuff, too. You could miss every word ever said in the story and you'd be totally confused about all these powers, weapons, and abilities, but you can still fudge it.Great SOLO, OR with friends! Granted, starting out, you're probably gonna wanna go public or have some buddies to help you out. But there are warframes, weapons, and strategies solely built around playing by yourself. These builds don't just get you by, they -encourage- solo play. You can really be the hero of your own little world, never meet another Tenno in your life with the right equipment.CONSTANT development. This world is ever-changing, ever-growing. There's been dev transparency and blog posts and livestreams since this thing started back in god-knows-when, and it shows no signs of slowing.If you haven't tried Warframe yet, and you're hesitating for some reason, cut it out! There's 0 reason not to- - Okay 1 reason: This can be *insanely* addictive. If you haven't tried Warframe yet and you're willing to risk getting a violent addiction to a new game: Get. In. Warframe. Hold onto your money, see if you like how this game feels in it's entirety, and if you dig it, you can spend a couple bucks without any regrets. But otherwise, costs you nothing but time to check out! ((Edited to enhance formatting))

It's been almost 7 years now. Being with this game for that long as a founder, you see a lot of good... and a lot of bad.
Do I recommend this game? Not for everyone, no. There's been many bad choices leading up to the current state of Warframe that has left many veteran players discontent. Hell, even I feel burnt at times. If you're looking for a game to no life everyday for the rest of your life, I'm not sure if you'll find it in Warframe in it's current state. The lack of a true endgame and the current nature of recent updates catering to new players over old has made the game wider but not deeper. For the other type of players that are more... let's just say sensitive, you'll find that the community has certain perks that may discourage a few behaviors. For one, begging for free items is heavily frown upon. Similarly, if you ask for help on mundane and simply task that anyone can do (that includes using Google), you'll find many people to not be receptive of your inquiry. The community is not so much toxic but rather passionate. The ones that truly stick it out knows that one of the best ways to enjoy Warframe is to build yourself up with your own hands. So if you're the type who likes their hand held 24/7 or be boosted/rushed to the "endgame," steer away because you won't be welcomed here.
Please also be aware that, while there is an extensive in-game market, it is by no means a pay to win model. Virtually all items that is prevalent in gameplay is farmable and the premium currency is actually tradeable between players. There is a very prominent trading community in the game and if there's something you want, someone else most likely has it. The somewhat convoluted menus and lack of proper tutorial contribute to the confusion. However, do not be discouraged once you've seen it for the first time.
In regards to update, it's quite a mixed bag. Because the developers do not have a fixed schedule, updates can either be extremely frequent or extremely sparce. And much of the content content you get can equally be as randomly enjoyable or otherwise. There is a massive array of activities you can do and it really boils down to your preference what you like or what you don't at all. It really is an effort by the devs to cater to everyone. Or atleast they try to.
You may also find that many updates come with an astonishing amount of bugs. This dissuades many players but I just want to pose a quick question, why don't you just not play the content until it's fixed? Since most activity are in essence optional, it's really up to you if you want to do it. No one is "forcing" you to play it, as I have heard many complained about before. If you feel forced to play a video game, that's more of your own priority issues, not the game. But the real caveat is, this is just how the game updates operate. Because one of the most important factors of Warframe is community and developer communication. Updates and fixes are very frequent and fast (minus holidays naturally) and the only issues that are usually left unchecked are miniscule or ones that are difficult technical wise. Other than that, it's not as much of a slough as many would like to proclaim. The devs give content to the players, players give feedback, developers start patching as soon as an hour after the content drop.
For the veteran players, do I think the game need a lot of work? Absolutely. I won't deny that current content drops have not lived up to the expectations of many but it's also mostly pointless to whine about it. If you truly no longer enjoy the game, get off it. Go live your life, play another game, and if the day comes, come back to Warframe. But if you truly want to make a difference, get on the forums, get in game and spread the word, create some influence. Be an actual member of the community rather than a ragtag pitchfork mobs. In the end, it's just a game and you can leave and come back anytime.
I'm not trying to be a white knight nor am I trying to hide the miscontent of many players, I just find it unproductive to whine and mope about. If a game really does bring about the worst in you, don't play it, it's a pretty simple concept. If you do want it to be better, finds way to help improve it, screaming your miscontent does no one justice. Not you, not the developers, not the game. Unless of course, you think it's morally right to riot and form a lynch mob, in which case I'm sure you can find the developer's address somewhere. In all seriousness though, I understand that some pressure is needed to push the devs to steer towards the direction we the community want but we often forget that they're people too. So unless you have never made a mistake your entire life, you're not in much of a position to talk :P
Make clear your mind but keep it civil, productive, and educated. You're better than that. We all are.

Get out while you still can.