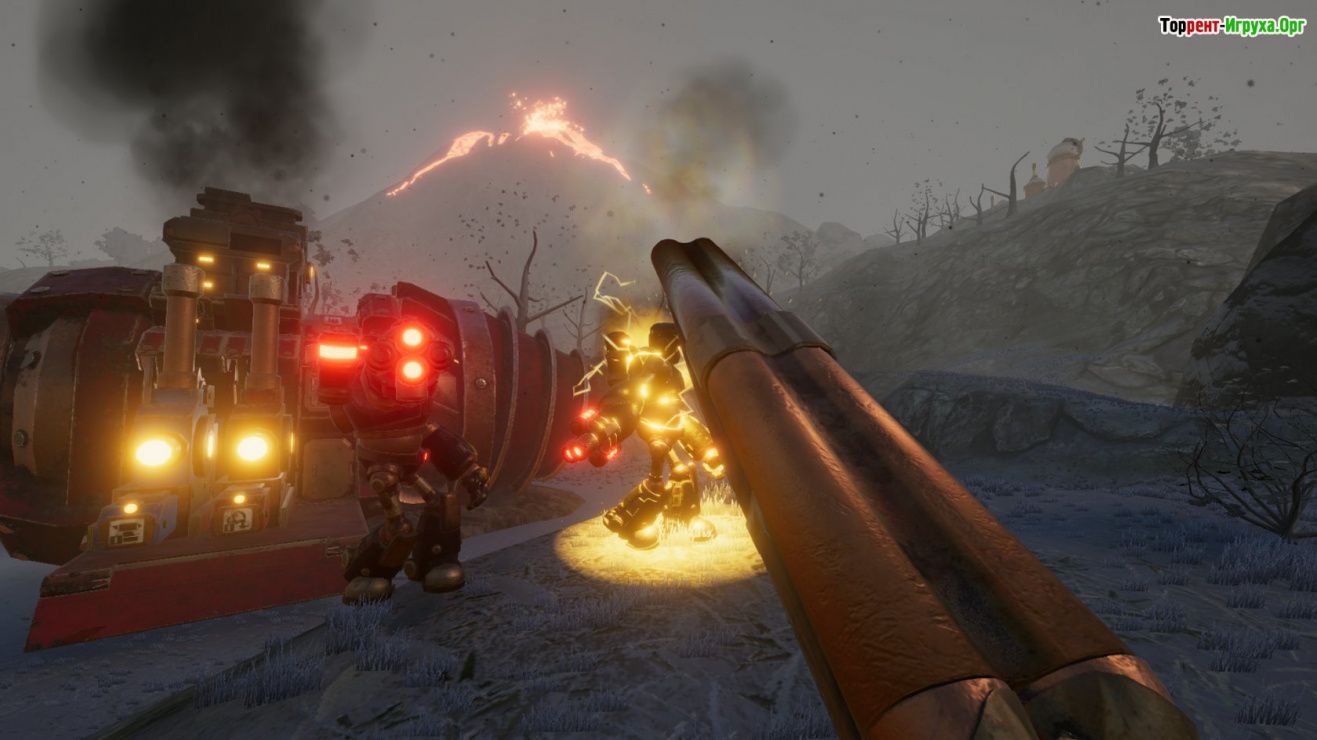 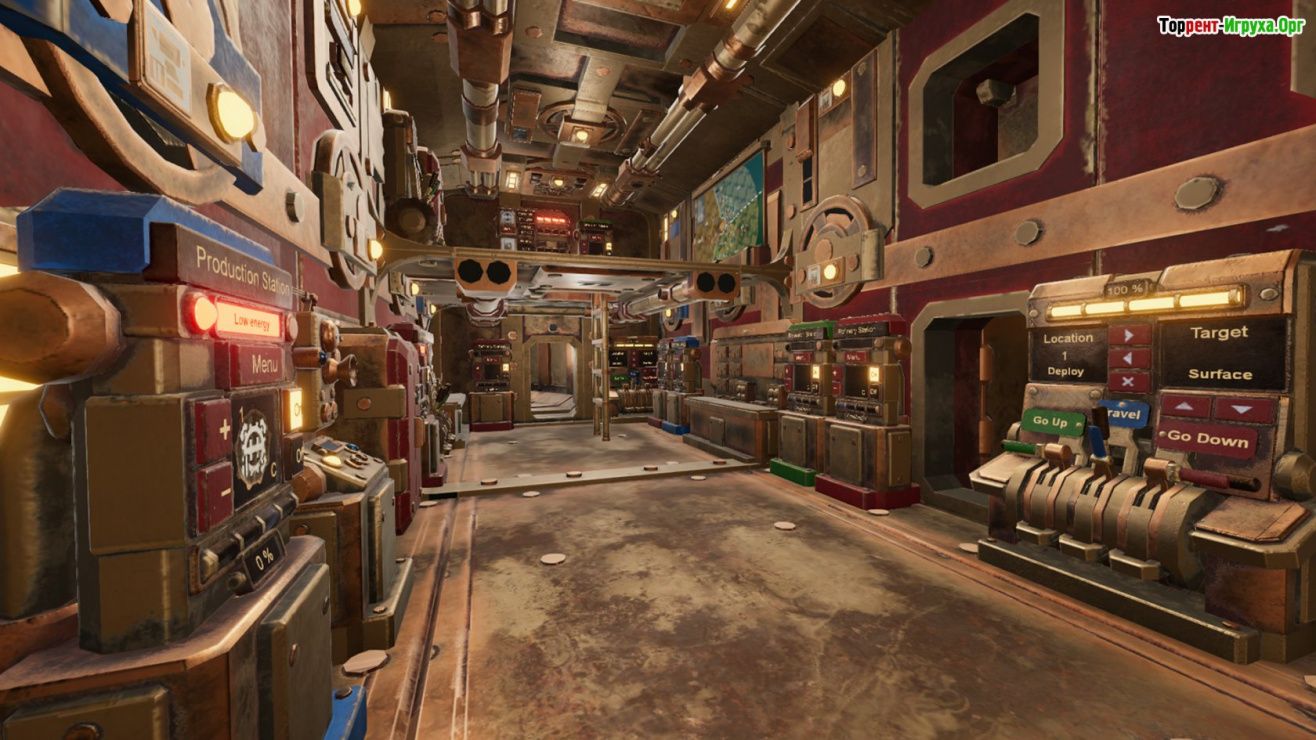 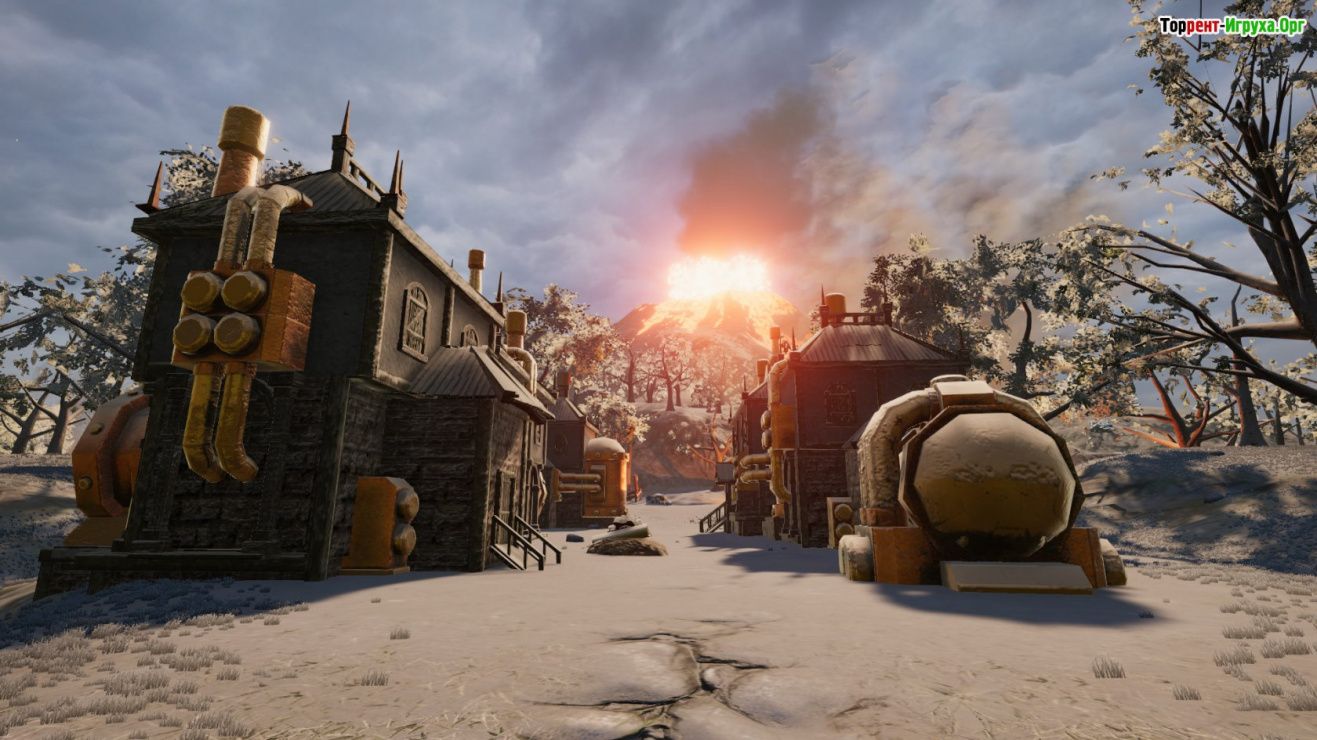 Honestly this game is awesome, The devs have done a great job with it so far, they communicate well in the patch notes and updates and keep you informed on the development updates, my buddy and i completed the game over 2 sessions in around 10 hours or so, We will be going back through it again on a harder difficulty and with our new found knowledge of automation we will try complete it faster.
The only notes i have playing through this game are below
1. Ammunition types currently there are 3 different ammo types but i hope they implement more for the other weapons as the only way we were able to deal with super tanky weapons is with the end game Gatling gun which i suppose is the point but i wanted to double barrel shotgun / Revolver these COG bots
2. The content is great and its a fun game to dive into however id love to see more of it, my buddy and i got to the point where we had effectively completed the game and were reluctant to finish it off because we didn't want it to end. maybe an endless game mode or more depth to the game / tiers and upgrades etc.
3. Additional fuel source modules would be cool a way to make maybe batteries that you can store inside the ship and solar panels that you can use to charge the bats when on the surface etc as late game coal power becomes an inhibit on your progress.
All in all id say a strong 9/10 with the only adding point being more depth to the game to have a bigger replay-ability / continual play

Drillship taking damage!
Lava
I shall begin this review by saying that the game is playable, despite the "Early Access" tag. However, I had some expectations that were crushed:
Drillships are not used to destroy other drillship.
You have to go by foot to destroy one.
...Without any protections. Guns are implemented in the game but not body armor.
Lava is not your enemy here, the robots are.
Volcano eruptions are a mere annoyance. It's just a matter of reaching safety in time, regularly.
Enemies are using hitscan weapons.
But nevertheless it was enjoyable.
The game revolves around upgrading your drillship (tier) to progress the game. The goal is to destroy all 3 laser... device plus another one, just heavily guarded by T4 drillships. Sounds pretty simple, isn't it? All of the laser devices are gated behind each tier. In order to upgrade your drillship, you'll need to do research for the new module, deploy the new module in the drillship, and craft the upgrade using the new module.
The tutorial quests is just so goddamn robust, you can just rely your progress on them, all the way until the ending. The quest system will tell you not only what you'll have to do, but where to get all the materials for the crafting, what you have to do in order to craft, point at the nearest material source, and tells you if the material you're looking is already in the drillship storage. It's not perfect, but it's way better than what you see in other games. Wow.
The robots (known as COGs here) is the real killer. All of their weapons are hitscan, meaning that all it takes to plant the bullet in your body is to pull the trigger right when it points to your body. They don't even have to aim, they have aimbot (no joke, sometimes their aiming animation gets bugged and fails to show, but they fire anyway and you get hit). As a rule of thumb, green bots (almost) never misses (but deals low damage), red bots misses a lot (but deals high damage).
NOTE: In the news, they'll be announcing for projectile weapons, which actually simulates a bullet going through that can be dodged, unlike hitscan.
Really, at the current stage, the game is more of an offensive play and less of a defensive play. On your own, the only tools you only have are weapons, pickaxe (you can use it as melee) and medkit to heal you (it takes 5 sec to use). No body armor or shields to reduce your damage. The only strategy is to kill the robots before they kill you.
NOTE: They're announcing that they'll be adding body armor in the next update (and even "power armor" in the future), so expect this information to be obsolete.
You can continue playing after completing the game, but no robots will spawn, volcano will stop erupting ("Volcano eruption in ∞") , and (presumably) no ores will spawn. It's actually boring after that, but who cares about the ending? Just forget that last quest and keep killing those clankers!
Despite all the weaknesses, there is one good thing about it: no rush on winning the game. Volcano eruption sets a timer on how long you can work on the surface but never set how fast you have to progress through the game. You can find a lone spot in the underground caverns where you won't be attacked by bots. Resources respawn, so you won't be afraid on running out of them. Take your time.
But hey, there's multiplayer if you need a helping hand from your friend... and an official Discord server if you're asking for a friend... if your game is set to multiplayer from the beginning (unless you manually edit your solo save into multiplayer).
Also, if you're playing this game, know that you can press G to remotely send your drillship to underground and back, while you hide from other places (you can hide in shelters, mines, or submarine).
Buy and forget until out of Early Access?
Put this in your library for a few months. The updates are slow but consistent. The game has been actively developed for months. The developers does listen to the community and actually implemented them, but, y'know, time and resources are finite.
This game, explained in terms of other game
...

It's hard to overstate the amount of potential this game has. It's been a lot of fun even in it's current, rather raw, state. If they keep working on it, it could become a real gem.
The shooter parts stood out as something that could use the most improvement:
- AI: There's only one tactic the enemies have: run towards you, and shoot. And there's only one tactic you can use to counter them: shoot back, duck, reload, repeat. And it's not very clear whether you're safe behind cover or not
- Enemy variety. They differ only in color and strength. Difference in weapons, abilities, or behavior would make things a lot more interesting
That said, the base building and raiding is very satisfying. Not sure if everybody will find it worth it's price at it's current state, but I'm not regretting my purchase,

I love what I've played so far. The devs 'get' the whole Steampunk thing - the drillship is a Jules Verne creation come to clanking, hissing life. Combat's a bit primitive right now, but I'm feeling the same way as I did when I played Subnautica in early access, and that's in no way a bad thing. Will re-review as development progresses.
Update: I can't stop tinkering with my Drillship. I'm holding off exploring more of the island to avoid spoilers, but even at this early stage, the game looks beautiful and runs really very fast and smooth at 1080p on my ageing rig (GTX 970). The degree of polish even in Early Access is evident: the animated intro is something I'd expect from a full release (lovely art style too). This is a project the developers *care* about. They've got a brilliant social media and public-facing presence too: you can read, vote and make suggestions on Nolt; there's a Discord; they're regularly active on Instagram, Facebook and Twitter, and engage with their base in a way that puts most AAA productions to shame. I've already bought a copy for a friend, and I think a few more will find Volcanoids in their account this Christmas.
I'm genuinely more excited for this game than for Cyberpunk 2077 (if I want to step into a corporate-controlled dystopia, I can just go outside). Give me my top hat, get the coal into the Drillship firebox and we're off to fill some marauding automatons full of buckshot!

As a much older gamer, and veteran of many survival games, I am always wary of early access titles. I watched this one and waited for the Co-Op update. The developers Trello roadmap looks exciting, so a friend and I took the plunge. After 24 odd hours we are having a total blast! This really is a tremendous amount of fun. The learning curve is very steep, but perseverance is well rewarded. the crafting and upgrade system is deliciously complex and rewarding, as you gradually upgrade the drill's various components and modules to face tougher environments and enemies. The maps are huge, and the travel system suits the game very well. The combat system is simplistic, but oddly satisfying, as you blow angry robots into chunks with a variety of weapons (The handheld mortar is hilarious) and loot their smouldering corpses. I would say we are about one third through the game, and have slowed our progress on purpose to keep the fun going as long as we can. If you enjoyed Ark:Survival, The Forest, 7 Days etc you will love this one.
TL;DR STEAMPUNK ROBOT SLAUGHTER IN A GIANT DRILL/TANK. PLAY IT.

Funnily enough, I found this through TikTok as it kept coming up on my FYP.
The game seems to have a lot of potential, and so much room to expand and it does seem like the developers are wanting to deliver a great gaming experience!
The Good:
- Visually inspiring
- Original
- Little bit of everything; combat (think Subnautica, with guns); crafting; exploring; surviving and so on
- Interactive tutorial (though could be minimally improved)
- Steampunk!
The Bad:
- Limited tutorial, but hopefully will be improved as the game goes on
- The crafting system UI is a little clunky*
- Too much open space, no world filling
- Cog enemies stand to be shot posing no challenge unless difficulty is increase
* The crafting UI: When trying to repair a breach, usually players will look for green, so when you click on a breach or repair a breach, it should show up as a wall if you have the repair module, however, if you do not have the module but have other modules such as a refinery or door etc... it builds that instead, making it a little award.
___________________________________________
On the whole, I recommend this game. It is pretty, it can be entertaining at times but obviously everyone's opinion takes different when playing.

This game is in early access, sure, but it is probably one of the best steampunk/survival games I have ever seen and played in my entire life, and that is saying a lot.
It has a decent grinding curve, beautiful graphics, and very active developers which are ironing out the bugs.
P.S. Someone named Tiereian or something said that you can’t dig with the drillship, on a map or anything. However, since the travel update, that has been proven untrue. So if ya see this, just know that you can in fact use the drillship.