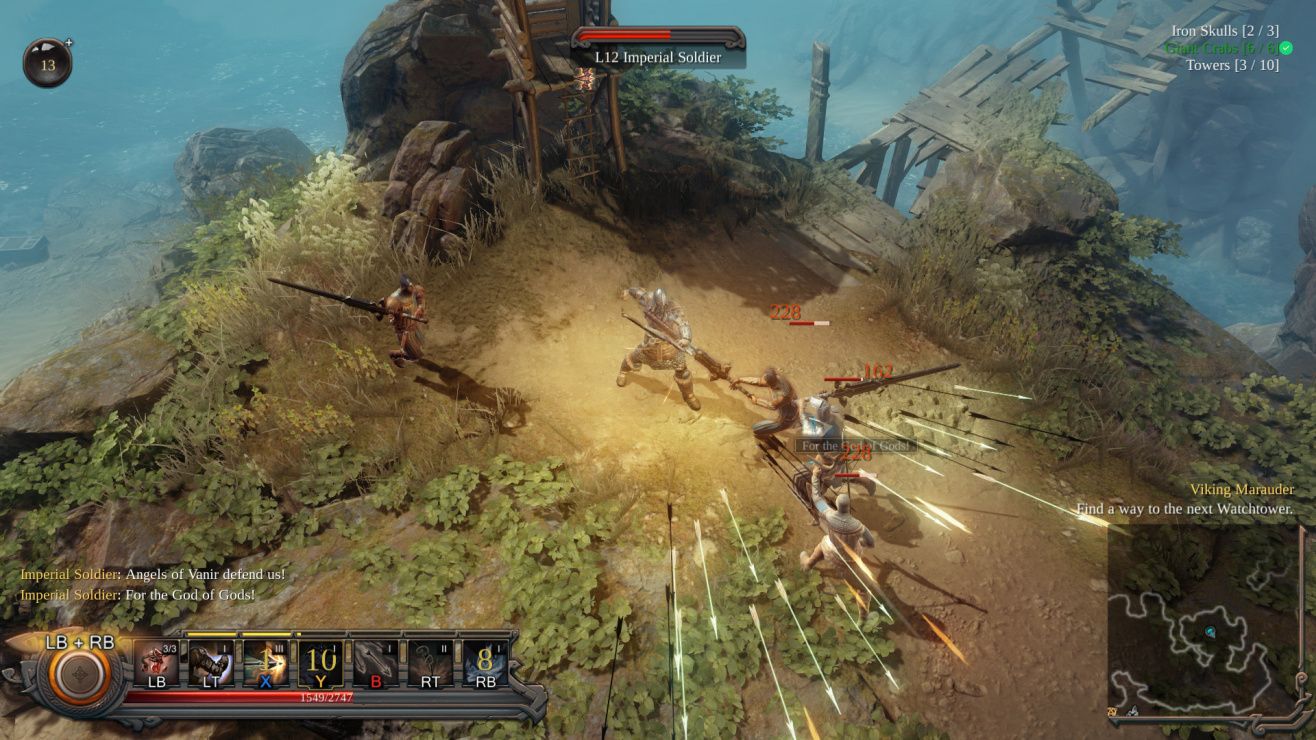 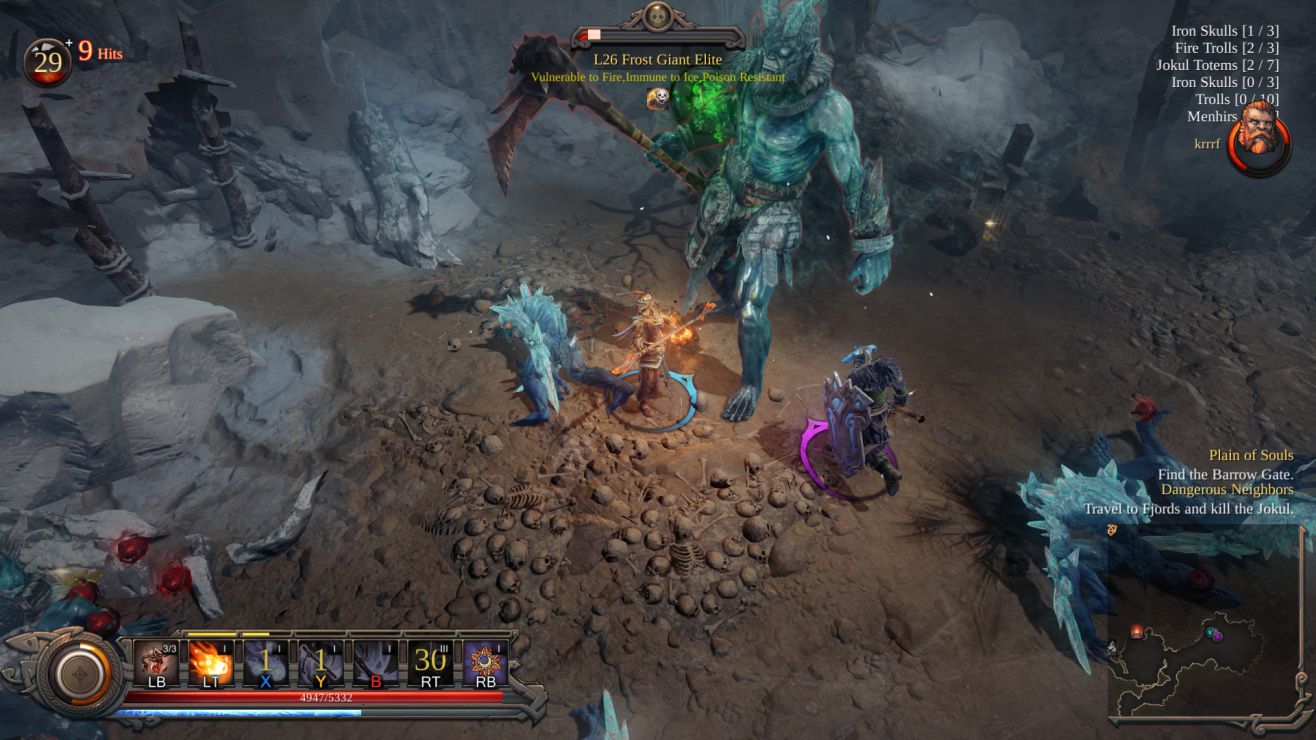 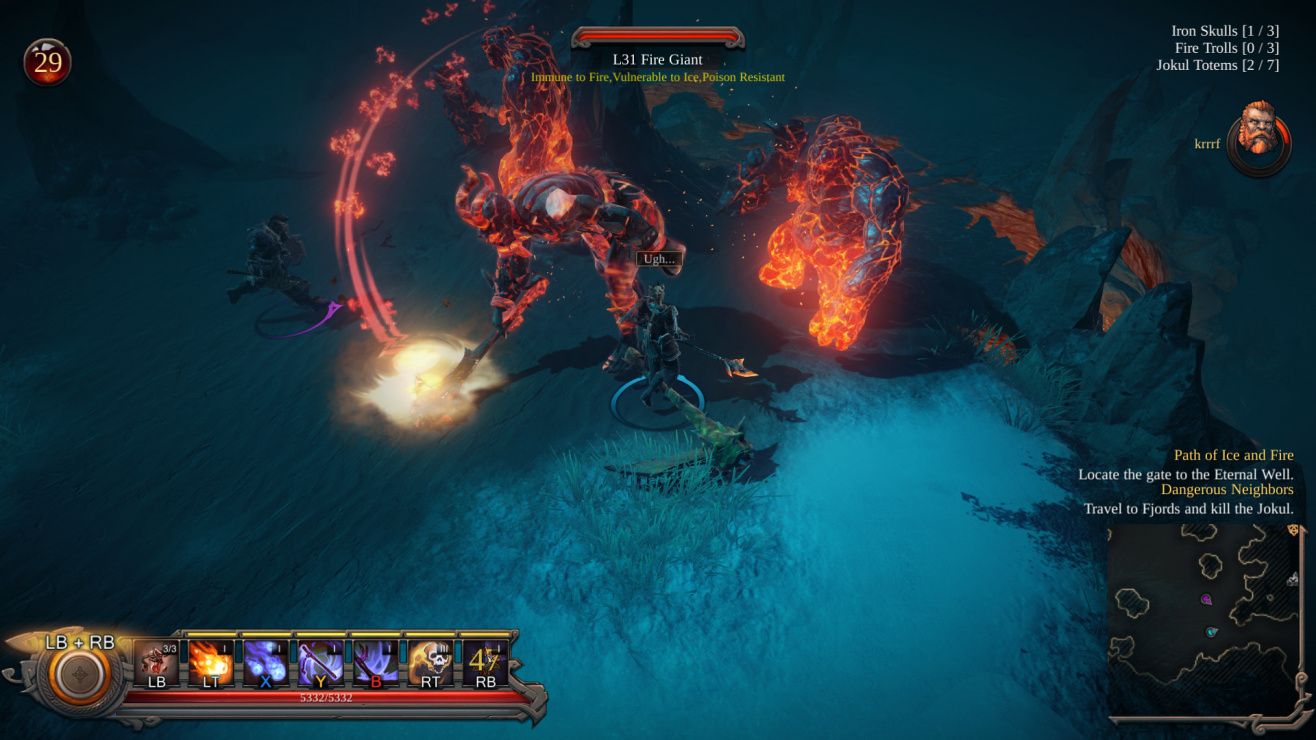 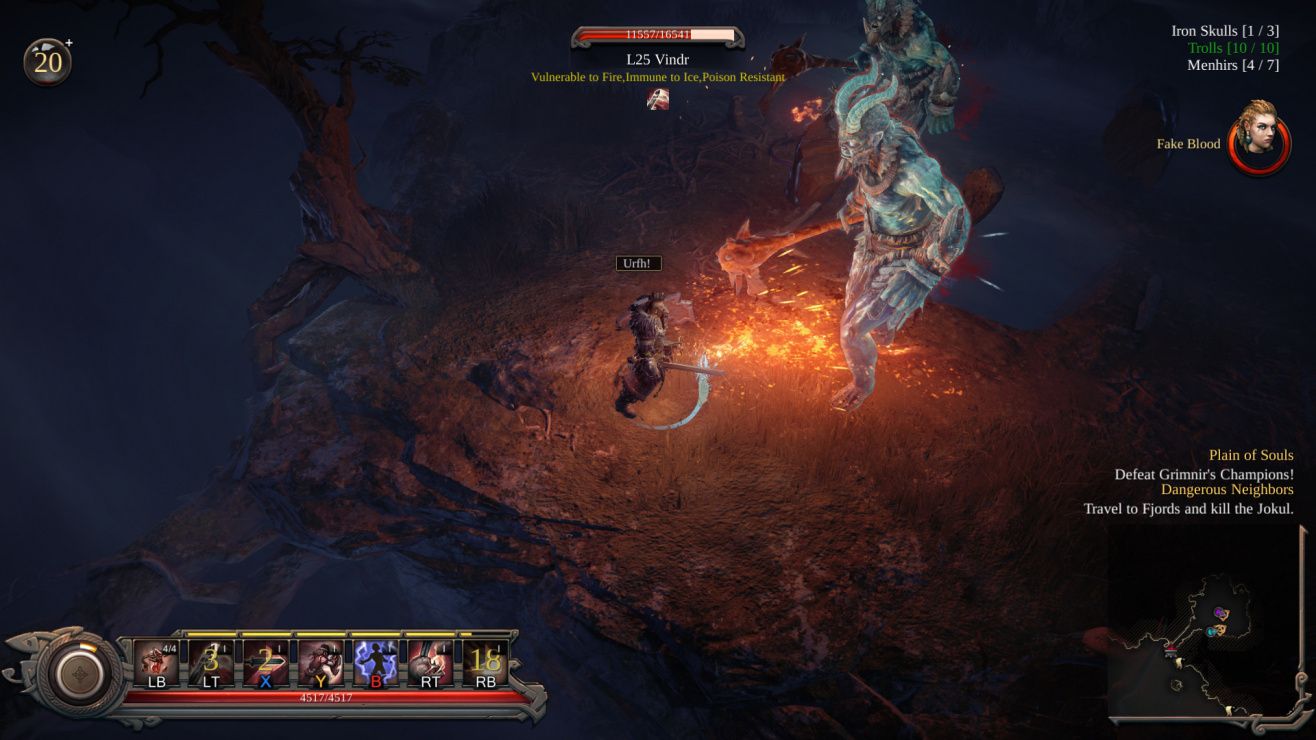 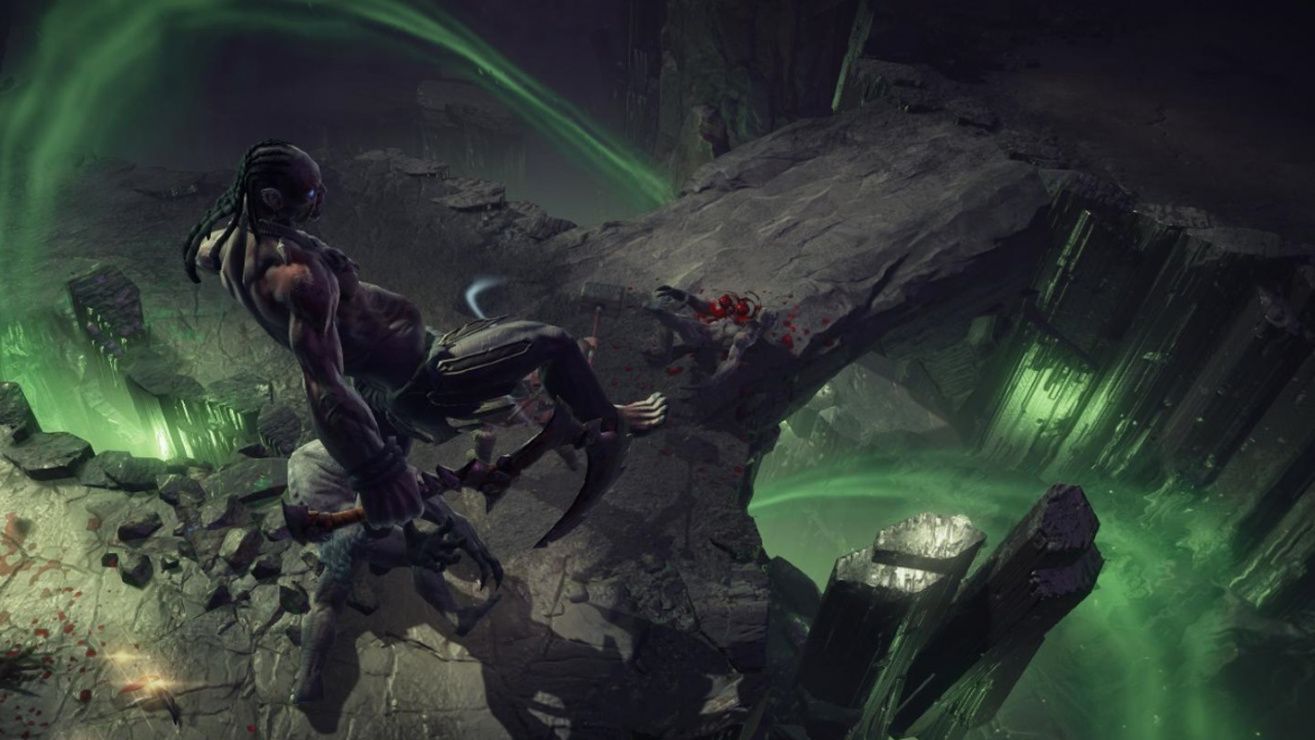 PC Steam Console Playstation action Xbox rpg multiplayer fantasy violent gore mythology vikings scandinavian
Ragnarok. Legend has it that when the coldest winter descends, the Jotan will return to take their vengeance against the Gods of Asgard. The world is on the road to perdition and the fate of Midgard hangs in the balance. But when the Fire and Frost Giants begin to merge their armies, they encounter the clan of the Ulfung – the Wolves of Midgard. Bloody, but unbowed following the destruction of their village, this notorious band of ostracized Viking warriors are determined to seize their destiny and save the world. As clan chief, you must save Midgard from complete annihilation, and spearhead the charge to vanquish the fiendish creatures of the Fimbulwinter.
Share Share Share
Promote for 50G

If you want to play deep and complex hack and slash action RPG you need look elsewhere. This game is very basic and does not offer profound class customization or interesting level design. But for people, who understand what they get into, game can still be fun.
Pros:
- Good graphics;
- Norse mythology;
- Co-op;
Cons:
- Annoying exposure feature;
- Game gets really repetitive;
- Not enough variety(in everything);

A good diablo-like, but well, a diablo-like. Upgrade your stuff, kill, upgrade your stuff more. It's undeniably fun for quite a while (and plays pretty damn well with pad), despite the main character having the personality of a stone and the same charisma, but then after several hours you start to ask yourself "why am I doing this?". The loot is not supremely satisfactory, the enemies start to become similar version of the same ones you met but with different colors, so the same-y-ness feeling grows. I could never finish, but i enjoyed the time i spent on it, so despite it being no masterpiece, it gets a solid 70/100 for the 12-13h or fun i got.

Seriously underrated game that has much to offer in terms of satisfying gameplay, but definitely not for the purists that are used to more complex hack n' slash ARPG's like Path of Exile/Diablo/Grim Dawn. It has a fairly linear progression on all fronts, yet the artstyle/graphics, the sounds, music, (certain) destructible environments, challenges and story (to some extent) really elevate it above mediocrity and place it just a tad below the greats of the genre listed above. If it had just a bit more depth to item rarity (staple of this genre is, of course, loot hunting) and better developed skill trees, it could have been an instant classic imo.
Alas, as it is, I found it very enjoyable but not that memorable (aside from near-death experiences I had since I played on Hardcore/Valhalla mode, where death = start from scratch). There is much to improve upon should Games Farm ever opt for a sequel to this game, given that Vikings: Wolves of Midgard truly offers a solid foundation for growth in all directions relevant for this genre. Buying it for full price might be asking a bit too much, but it is a must-buy if you get it on sale.

PLAY THIS GAME WITH A CONTROLLER
This is an action game with rpg elements, not an ARPG like diablo or path of exile. Dodge roll timing is far more important than your build set up. This game is much closer to "Rune" than torchlight 2. From that standpoint, it is an excellent game, but if you're expecting diablo, it is not that game.
FYI the physics ragdoll and dismemberment systems are great which keeps the simplistic combat fun.

Overall I enjoyed the game and do recommend it
Good-
Story was interesting
Graphics were solid
Combat was enjoyable
Bad-
Having to cover every inch of the map and look for items that blend into the background was not fun at all-everything tended to be one color scheme-That's not challenging, it's irritating
The way the character runs is not at all lifelike-would like to see this changed
The auto-loot was sketchy at best-when running back through the map looking for the 1 stupid brown idol thingamabob I noticed a lot of stuff didn't get picked up. Being able to press alt to see all loot would be nice
Boss fights early on were just bad-you gad to resort to a bow and kite the boss to beat them

It's a solid hack and slash game. As others have said, it's similar to Diablo, but I prefer Vikings myself. After completing the main campaign as a warrior wielding various two handed weapons, I have greatly enjoyed mastering the differing styles offered as a shield maiden, such as sword and shield, dual wielding, the bow, and the quarterstaff. There is a lot of quality detail if you have even a passing interest in the Nordic mythos and Vikings in general.

Okay! This is not really a review of this game but just sharing my opinion. I see it has got lots of positive and negative reviews here alike which can confuse anybody who's interested in buying this game.
In short it's a diablo-esque Hack'n'Slash RPG and it does pretty well as an ARPG Game.
I personally think the reason why It has got bad reviews is more likely because of its some innovative or should I say for "many" confusing new features in this ARPG. I too had some trouble understanding those features for example upgrading merchant stores, doing trials of gods and selecting your deity so you can acquire selected god's blessings and his skills.
Another reason why I think it got negative/mixed reviews here is probably because of the absence of Open-world non-linear type story telling/missions. I personally did not find it as an issue. Of-course it's no Grim-Dawn or Diablo but In its own way it feels unique and addition of new styles and features are plus for me. I would like to thank the developers for at-least trying and putting their efforts to offer different experience than most of those generic Action RPGs that are available in the market offer. So for it was not an issue. I liked the concept and it works for me.
From the technical aspect of this game the Game is well polished and well designed. It's atmospheric and music is also good.
And I am glad that not even one crash so far and I am loving it.
End note: It may not be the best looking or best ARPG available in the market but it's definitely a must buy if you love ARPGs. So, if you are planning to buy this game and you are confused because of the mixed reviews then let me assure you it's safe to buy it. The game is stable, well polished and not buggy at all(at-least in my case), It has an interesting story with variety of enemies and not even one dull moment. Yes, there are some new features, so at first you might have trouble understanding them for example leveling your character-up, unlocking gears etc but it only takes a few hours of playthrough and you become familiar with all these new features.
So I highly recommend this game.
Thanks for reading.