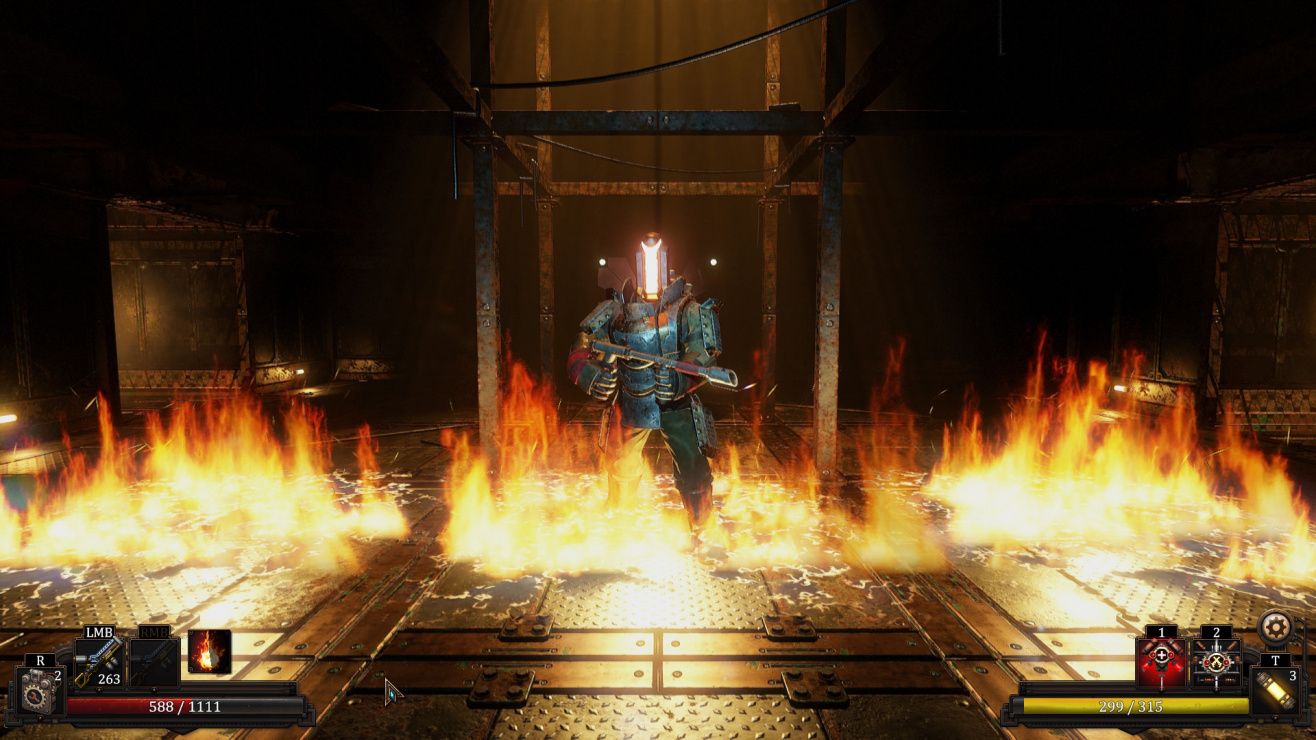 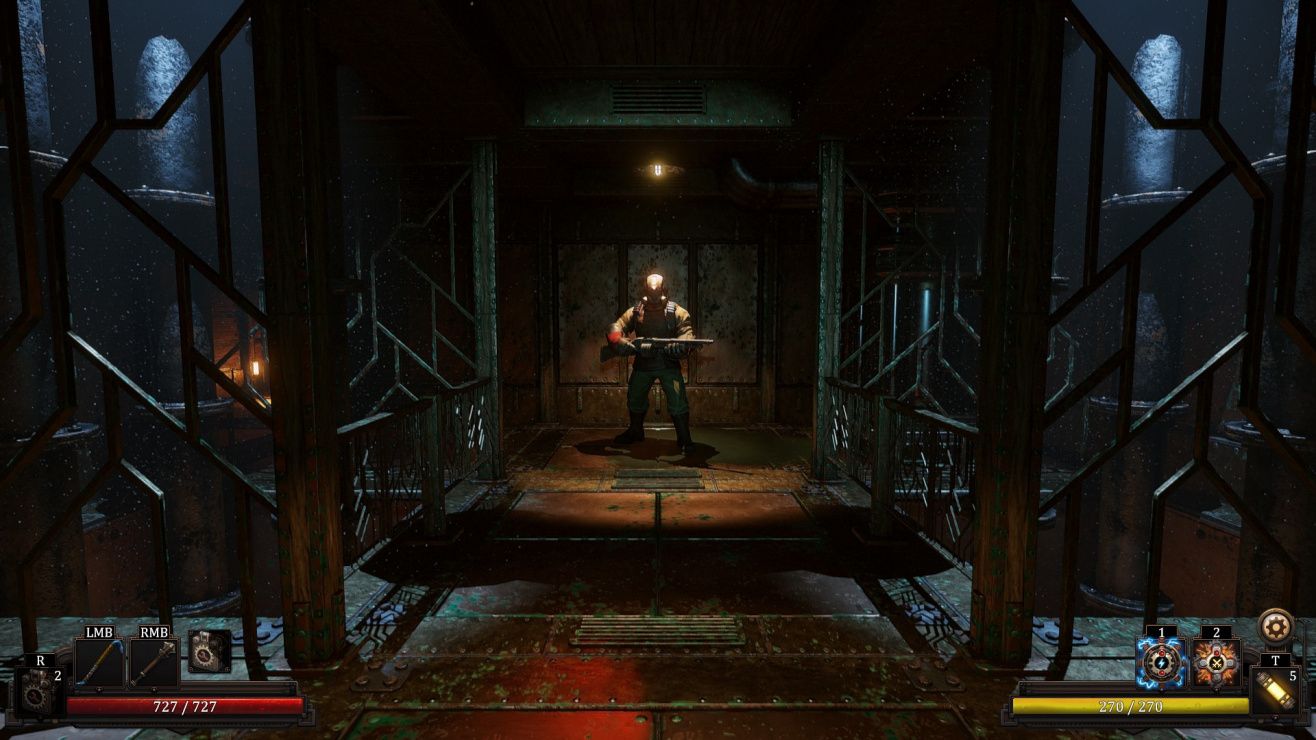 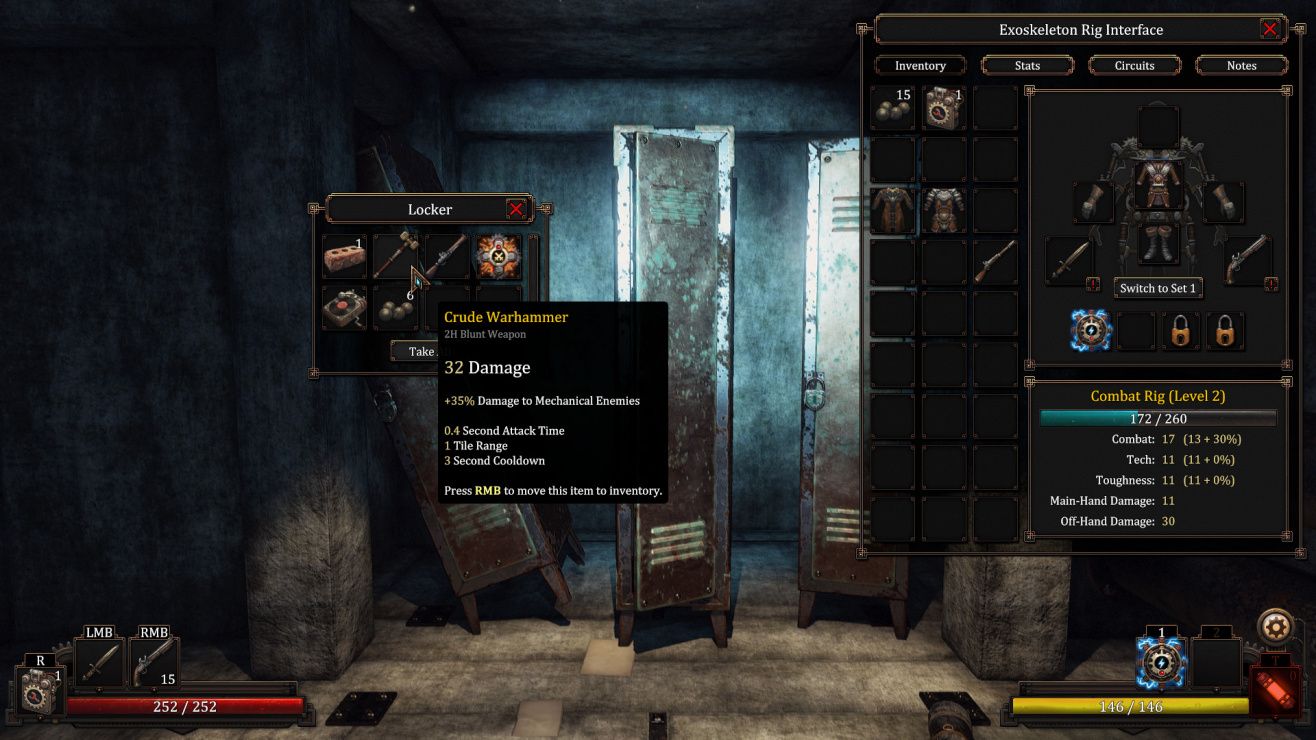 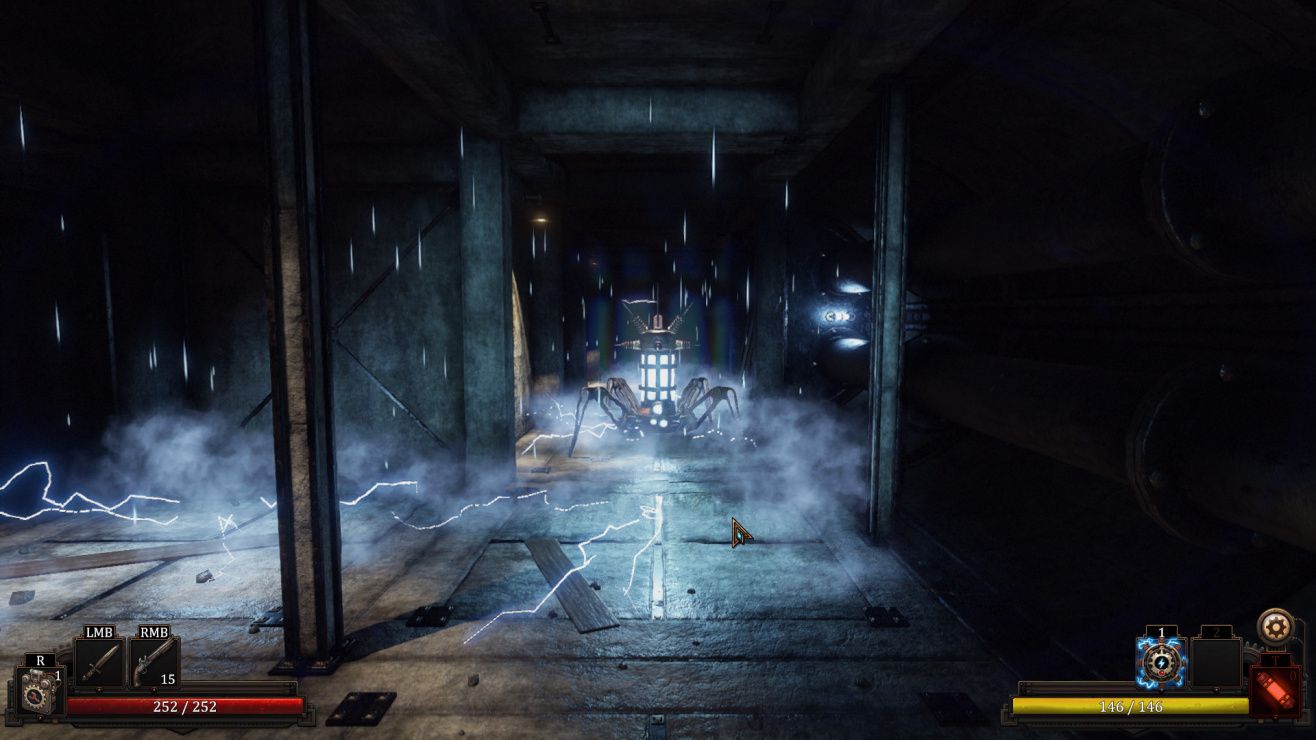 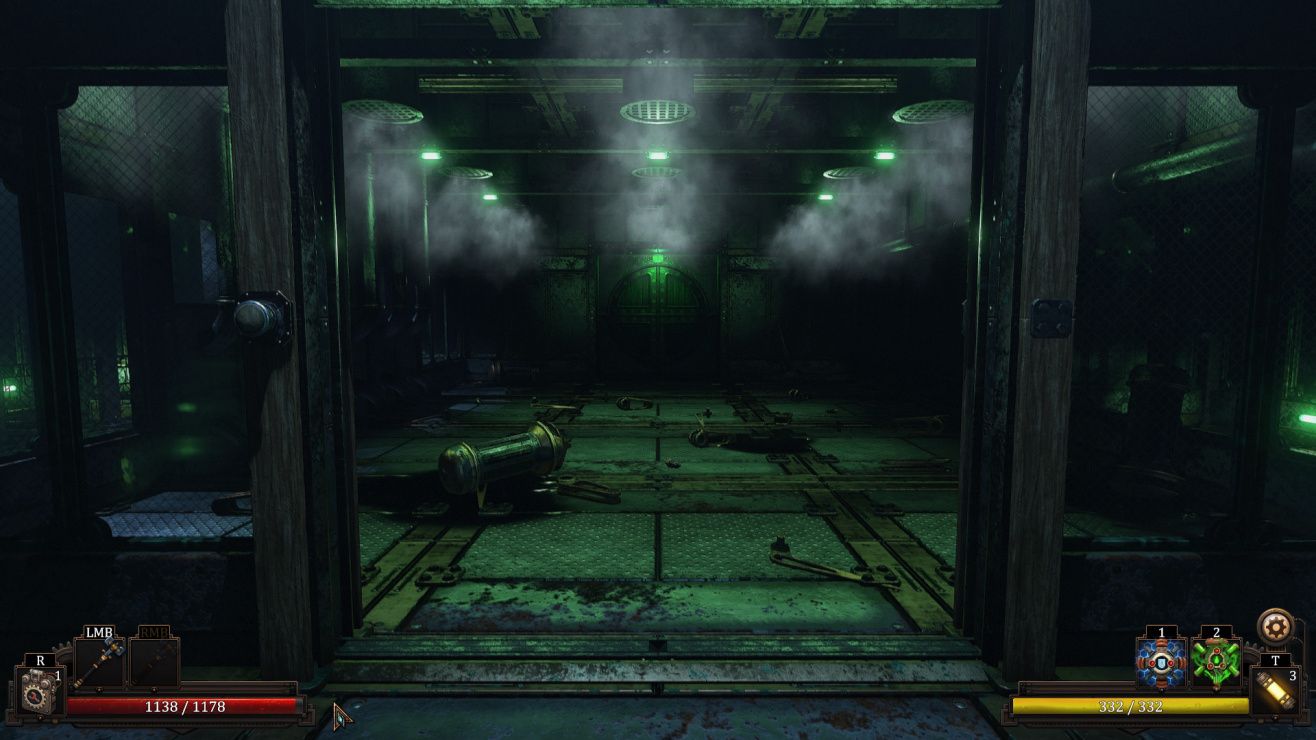 PC Steam Console Playstation Xbox adventure Nintendo rpg fantasy dark combat tactics dungeon steampunk
Vaporum is a grid-based, single-player & single-character dungeon crawler RPG seen from the first person perspective in an original steampunk setting. Inspired by old-school games like Dungeon Master I and II, the Eye of the Beholder series, and the most recent Legend of Grimrock I and II. Stranded in the middle of an ocean, in front of a gigantic tower, the hero has to find out what the place is, what happened there, and most importantly, who he is. Combat takes place in real time. Each enemy has a distinctive set of strengths and weaknesses so you have to employ different tactics to beat each one. Weapon types have each a set of unique bonuses and behaviors which adds more depth and thought when choosing what weapons to equip.
Share Share Share
Promote for 50G

Vaporum is a dungeon crawler. You know, like the ones Grandpa used to play. The ones he even had a pen and paper to draw something he called a "map" for. Because games back then were awful, just the way Grandpa liked them. And now they're back in style!
The story is...not that important. You must climb a tower. Why must you climb the tower? Because it's there. It's really not that important! The game looks and sounds great. And the steampunk setting, the sweaty cousin of the much cooler cyberpunk, is a good choice compared to the usual fantasy fare. There's also voice acting. It's a mixed bag, but there is voice acting. It is a fact.
So once you head inside the tower you get to choose your playstyle. I chose to play a bog-standard hammer man who eventually learns he can use a hammer in his other hand as well. It worked alright, but after a few hours I would've given anything for a more active spell gadget-oriented build. At least the game offers replayability.
Real-time combat can get hectic at times. Especially when the game has a habit of luring you into murder rooms and locking the doors behind you. Grandpa loved these. You can always switch the game to a pseudo turn-based mode at any point with the press of a button. It's mostly useful in timed puzzles, though. And what's a dungeon crawler without puzzles? The ones you must complete in order to advance are all pretty good and offer a decent challenge. Optional ones sometimes require a PhD in Sierra video game logic. There's enough variety in them to keep things fresh, and the items and upgrades you find as reward for doing them are worth it. Secrets, however, can be incredibly hard to find without resorting to a guide. Trying to find a hidden button on the wall in the dark gets old pretty fast.
I reached the end at around 15 hours, so the game definitely has some meat on its bones. It's a good game and even normal people can enjoy it. No pen or paper necessary. I'm really digging this nostalgia-necromancy times we're living in, so much so that I'm looking forward to playing the sequel one day.

I admit it. I used a lot of sleazy tactics to weasel my way through Legend of Grimrock. It was utterly reprehensible. I'm ashamed of myself. For those of you who did likewise, this game is our just reward.
They've beefed up their anti-sleaze defenses quite a bit here in what I can only assume is a deliberate effort to stop scumbags like me. You can forget about pulling monsters back to a gate one by one and then opening and closing the gate to avoid damage when the doors slam shut and lock you in a small room.
Remember the good old run-around-a-2x2-square-so-they-can't-hit-you routine? It still kind of works, but it's a lot harder to pull off when you're in the aforementioned small room with two or more monsters who can do things like spit acid on the floor and drop AOE attacks. Get a little lazy and before you know it they trap you in a corner and it's over. F9.
While the punishment may be well-deserved, that doesn't make it any less of a drag. There's a general formula to this game which goes: enter room --> door closes --> fight monsters --> door opens. You can see it coming, and after a while it evokes only a sigh of resignation as each new ordeal, much the same as the last, draws near.
There's not much variety or progression to the enemies and they can absorb a ton of damage, which made the battles a real grind; and that was with a more dps-oriented character, too. Not to mention, I was playing a rifle spec because I had big plans that involved running away a lot, and it turns out that ammo can be pretty scarce until the very end. So much of the time I had to switch to some lousy melee weapon I barely knew how to use just to conserve bullets. No respec-ing, either.
Even the environments are kind of dreary and monotonous, although technically speaking it does look really good for an indie. Maybe that comes with the territory in these steampunk sort of worlds; but it doesn't seem like they explored the potential of the environment very enthusiastically. I mean, it's a big tower on the ocean, yet they never take advantage of this dramatic location. Once the doors slam shut, you could be anywhere. Would have been nice if they showed you a little more variety as you went along to liven things up.
Don't mean to come down too hard on this game. It's not so bad; and to be fair Legend of Grimrock had some of the same issues. There's a story, too, by the way. I put off mentioning it because (just between you and me) I wasn't really paying attention to the logs you find until they actually started to seem important later in the game, and at that point I wasn't going to go back and read them all to catch up. The part I did see near the end seemed ok, though.
Maybe I'm just bitter because they shut down my slimeball combat tactics. Can't they just unlock the doors and free me to be the man I was meant to be?
Come on, give me a little breathing room and four contiguous tiles and I'll take on the world!
You can find more indie game reviews at oddlittlegames.com or visit my curator page. Thanks, and enjoy!

Pretty good dungeon crawler. (But it's not in the same league as LoG.)
Obviously the big pull with Vaporum is the steampunk element, and I'd argue it pulls that off quite well. There's a bit of eldritch lovecraftianism mixed in, which certainly doesn't hurt. The atmosphere is great, with good music, for the most part awesome voice acting, and just enough darkness mixed in.
The combat is fun and rewarding and with a bit of situational awareness and decently quick reflexes you can easily get through most fights without being slapped around like a combat dummy. There's also an abundance of bullets, so you can comfortably get through the whole game with just using guns without worrying about running out of ammo, which is pretty nice. Beyond guns the melee weapons do either slash or blunt damage, each having bonuses against one of the two types of enemies you'll fight, but with each type having its own separate talent tree, you should probably stick to just one. (There's only enough points to max out three and a half skill trees.)
Beyond weapons you also get gadgets, which are a pretty powerful addition to your arsenal, even if you're not speccing into them; also most of them are useful, so you'll find yourself using them often enough, which is exactly how auxiliary items should work in games.
The skill trees offer plenty of interesting options and you're pretty much forced to level up at least two at once, as each skill has a level requirement, which I don't find particularly pleasant, but it works here.
There's also a couple of puzzles and some secrets (some of which are very sneaky, but most of them are not too hard to find, once you know what to look for) sprinkled in, as you'd expect. Not nearly as much as LoG, but that's probably a good thing... (PSA: you can check the statistics before leaving each level to check if you've found them all so you don't have to backtrack later, if you're a completionist...)
The story is alright, nothing too exceptional, but not a poorly written snoozefest either. You slowly put together what happened as you progress, with notes left by previous inhabitants helping to paint the picture of how things got to where they are when you arrive... I would've liked if the game answered a bit more questions about the whole situation, but what we got is mostly fine. What exactly is fumiun? Does it really have some sort of consciousness? What is it's goal, given the plot twist at the end?

I don't actually remember ever playing a dungeon crawler before... However, this game was definitely worth it, and I believe that both newcomers and old school fans of the genre might agree.
It's not a long game, if you don't find it necessary to check every bolt and screw for a button, though I think you will enjoy it more if you do like looking for secrets. I found the story captivating enough and the setting interesting, and I would like to see more of the outside world and learn more about its politics. If you are familiar with the genre, you have the option to disable both the automap and manual saving.
It is the kind of game that I finish and instantly want more. I should feel quite lucky having played this game now, as a prequel is scheduled for release the day after tomorrow - yay!