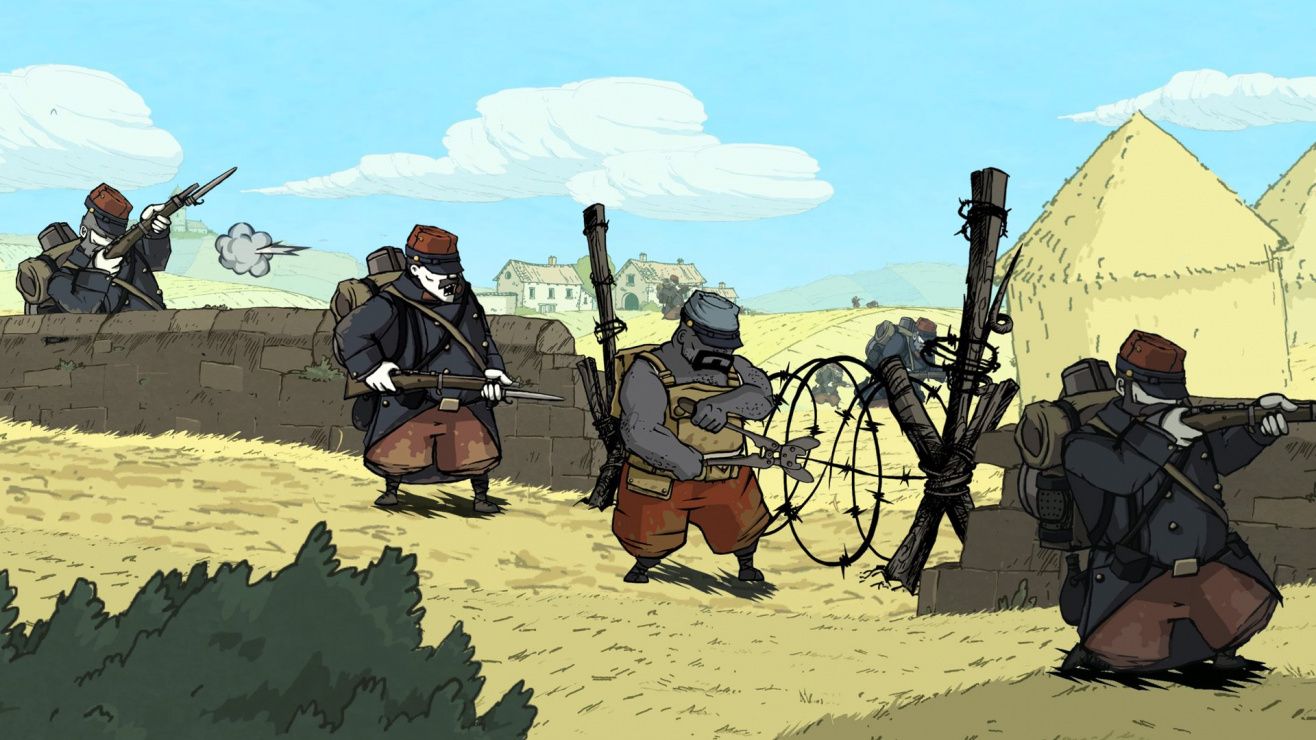 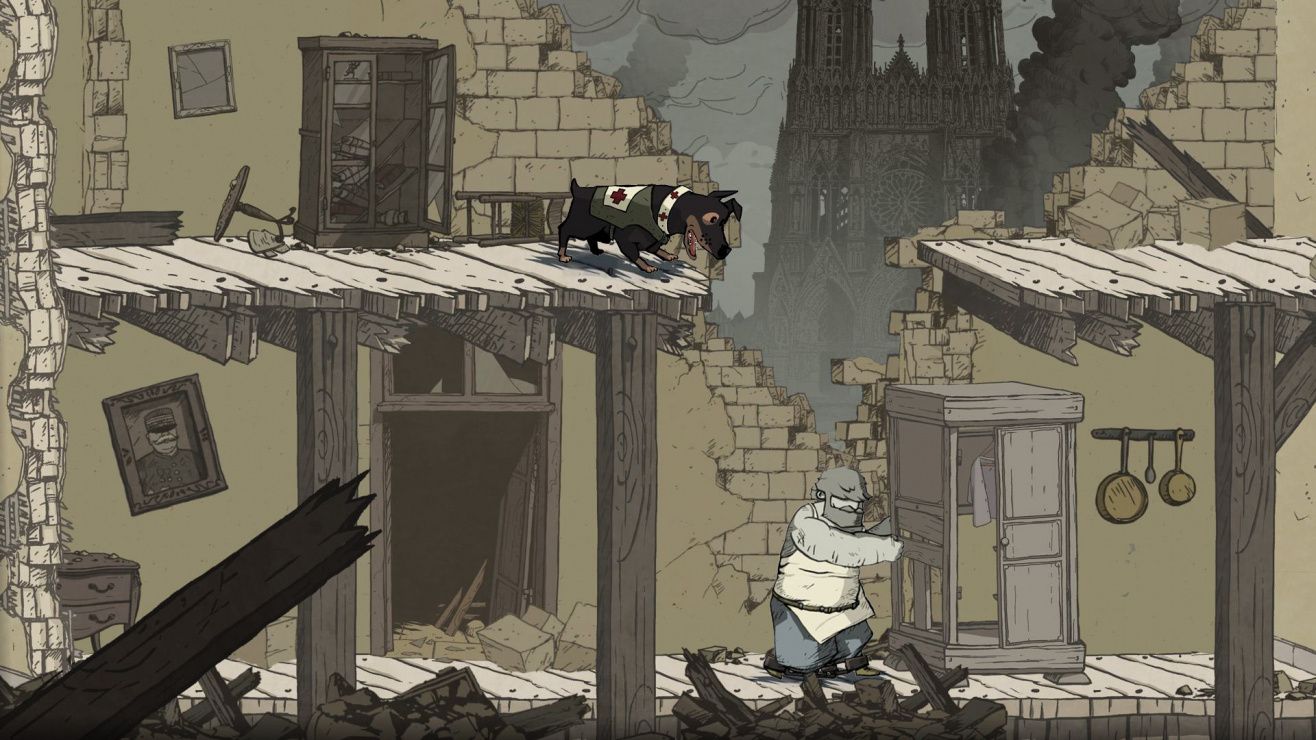 adventure atmospheric drama historical platformer puzzle quest story war
This is the story of crossed destinies and broken love in a world torn apart. Of people who will try to survive the horror of the trenches, following their faithful canine companion. In Valiant Hearts, the lives of these characters are inextricably drawn together over the course of the game. Friendship, love, sacrifice and tragedy befall each one, as they help each other retain their humanity against the horrors of war.
Share Share Share
Promote for 50G

Its not a game, its a masterpiece

I'm not crying, you're crying

I've bought the game during the steam summer sale. I regret doing that.
Should've bought it full price.
Short game. I'm in tears

"To my dearest friends,
Through the evil noise of artillery, tanks, and planes
I remember our adventures, your friendship and your pain.
My closest friend 𝘌𝘮𝘪𝘭𝘦, in your twilight years,
You came to fight, not for glory, but to mend your daughter's tears.
𝘓𝘶𝘤𝘬𝘺 𝘍𝘳𝘦𝘥𝘥𝘺, you were always fearless and with intent,
I hope you have found peace with your letters that were never sent.
𝘈𝘯𝘯𝘢, my bravest of warriors across the western front,
Saving the mountain of wounded without firing a shot.
And 𝘒𝘢𝘳𝘭, if only I could light your way home through the fields of war,
Through treacherous nights, to be with your family once more.
Although I cannot write these words and the time has come to part,
𝘠𝘰𝘶𝘳 𝘴𝘵𝘰𝘳𝘪𝘦𝘴 𝘸𝘪𝘭𝘭 𝘢𝘭𝘸𝘢𝘺𝘴 𝘳𝘦𝘮𝘢𝘪𝘯, 𝘢𝘴 𝘸𝘪𝘭𝘭 𝘺𝘰𝘶𝘳 𝙑𝙖𝙡𝙞𝙖𝙣𝙩 𝙃𝙚𝙖𝙧𝙩𝙨."

WOW. I bought this game in the afternoon and finished it just jet but the expirience I had was wonderful the story is more than just amazing and I'm still crying because of the ending. This game is an overseen Gem wich more people should have played. I hope sombody reads this even if it's 2020.
This is an perfect example of Perfection

This a narrative driven puzzle game. The difficulty is not too high, but that fits well with the narrative and the gameplay, the player very rarely gets stuck and the story keeps flowing. In this game you will find yourself in a lot of different situations where you will feel many different things, the developers are really skilled when it comes to blowing one emotion or another into the scene. The overall experience is synchronous, like a dance.
The story brings some moments of emotion, of hope, but let's not fool ourselves: It is a drama based on the First World War. Many of the most lethal and terrible weapons that humanity has seen began to be used in the First World War. And the game conveys that "Oh my god" feeling every time one of those weapons appears.
Valiant Hearts is a humble masterpiece. It requires the use of Uplay, which can put some players back. However, in my opinion it is worth it despite everything. If all Ubisoft games were like this, Ubisoft would be a much better company than it is and its work for the video game industry would be priceless.
It has no dlcs or microtransactions, and if it has any, it is completely irrelevant.
I cannot recommend it enough. It's already a classic. Just buy it.

One of the most brutal periods in the history can be used for more than shooters and strategy games.
Valiant Hearts: The Great War is a puzzle adventure video game developed by Ubisoft Montpellier and published by Ubisoft.
Inspired by real life letters written during World War 1, Valiant Hearts tells a story about four characters working together to help young German soldier named Karl help find his love in those tough times.
It's a linear game where to progress in a story you need to complete the objective.
Majority of the gameplay is puzzle-based, to beat specific sections you need to fix, find, or simply destroy a objective to move further. Each character has a unique trait which will be a requirement to beat most of the areas. Big part of the game is also Walt the dog, your best four legged buddy who can, move through small holes, carry items, distract enemies and more! Yes, you can pet him!
If you will have problem with puzzles, don't worry! Game features hints which kick in after a while, when VH notices you spend a bit longer than you should on a riddle and might require assistance. Each puzzle has few hints, which turn into steps on how to complete it, if earlier hints won't help you. You have a small cooldown before being able to use next hint.
Rest of the game is a mashup of different elements from adventure games. You have stealth section as you move through enemy trenches and encampments, rhytmic chase segments set to classic songs, and wartime parts requiring you to survive heavy gunfire. Segments are mashedup perfectly between puzzle areas, making gameplay always fresh and interesting.
While making your way through the story, game will drop you some facts and interesting notes about this deadly time period. From types of warfare, weapons and new technology used, to uniform, cities, animals, and more! Combining a inspired by that period story, with some "historical accuracy". And there are collectibles items that have a description of what they are and what is their usage, or was. Really fun to find and collect!
It's fairly hard to find issues in this game. Checkpoint system sometimes is wacky, where you have to repeat entire sections incase you fail. Definitely decreasing importance of one character from being a playable, next hero in this marvelous story to...showing up for 5 seconds in a cutscene and for next 5 in one section of the game. Especially as this was supposed to be "George, a British pilot who lied about knowing how to fly", which meant even more interesting vehicle sections! And because game dosen't have airborne sections, it creates a hole that was never supposed to be there. It sucks, but nothing you can do about that.
If you want to increase the challenge, game features a Veteran Mode. This mode turns off the hints.
Because this is a Ubisoft game, Uplay/Ubisoft Club is required. Besides that, game worked great, optimized very well when it comes to performance.
Composed by Ian Livingstone and Peter McConnell soundtrack fits this brutal period, mixed up with classic songs from well known world composers, including Offenbach's Can Can! Sound effects, fantastic. Dave Pettitt does a great job at narrating this story, while rest of actors does what they have to, as game doesn't feature many lines of dialogue.
With a combination of interesting facts, fun gameplay and comic artstyle it's a must to play for fans of WW1 period, beautiful stories, or both! Masterpiece. 9/10!
If you enjoyed reading that review, check out my curator page!