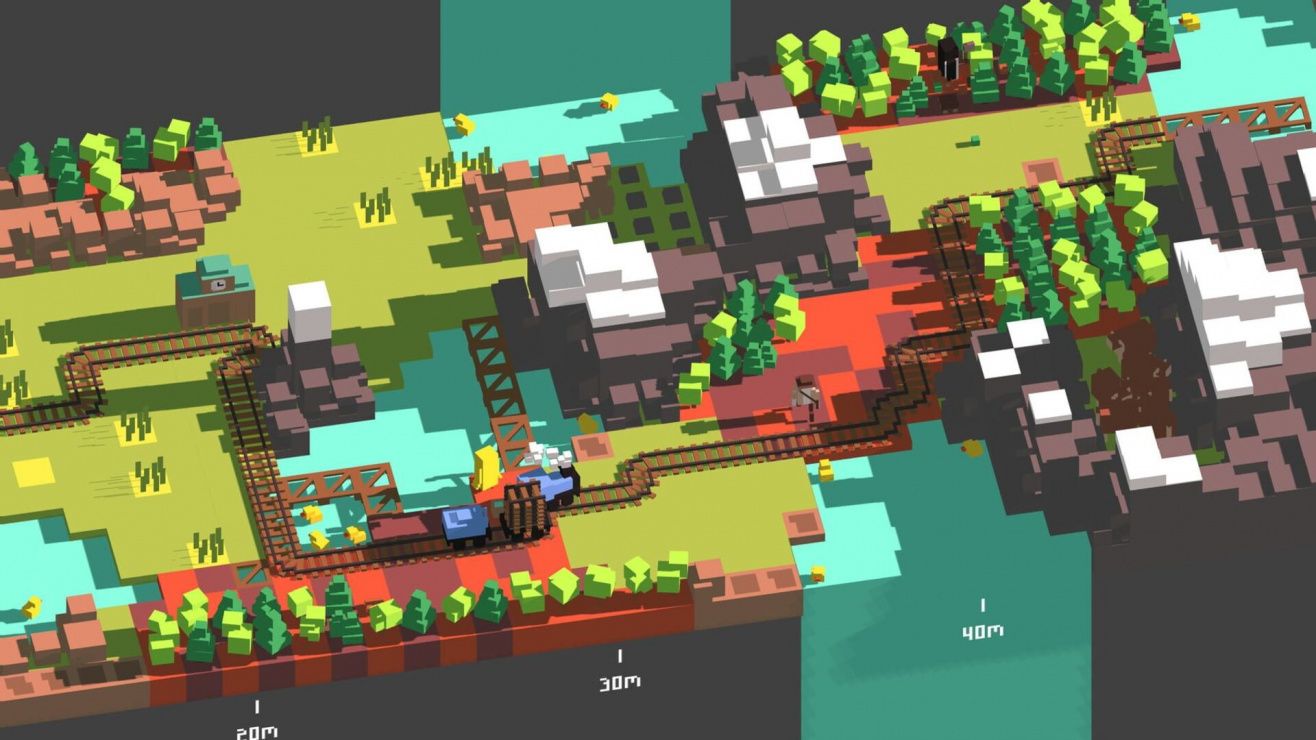 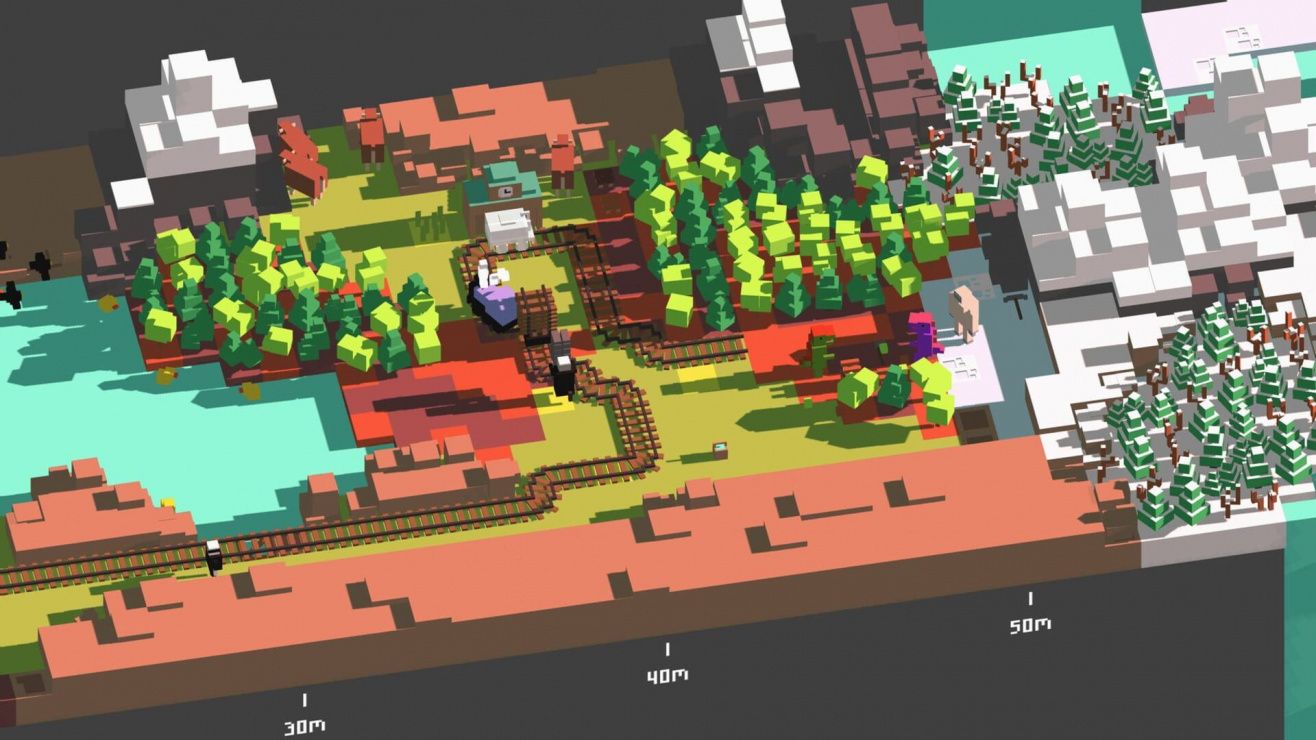 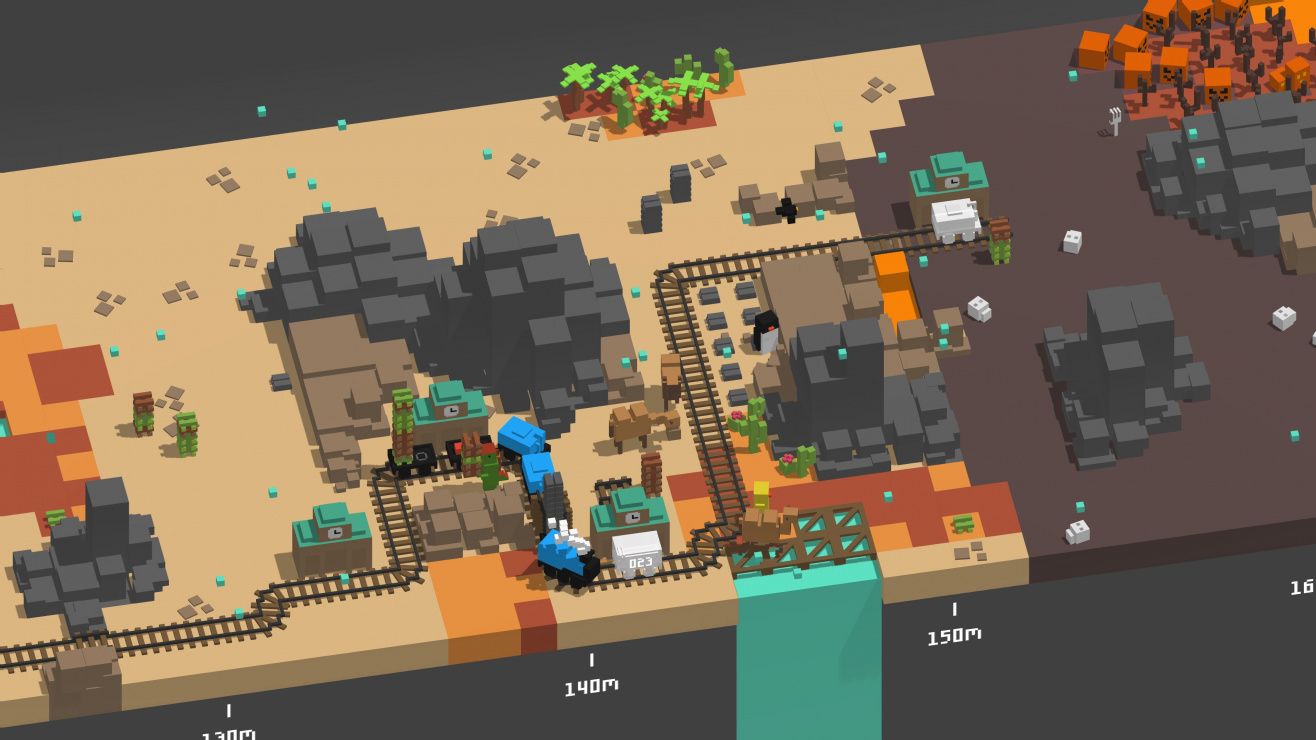 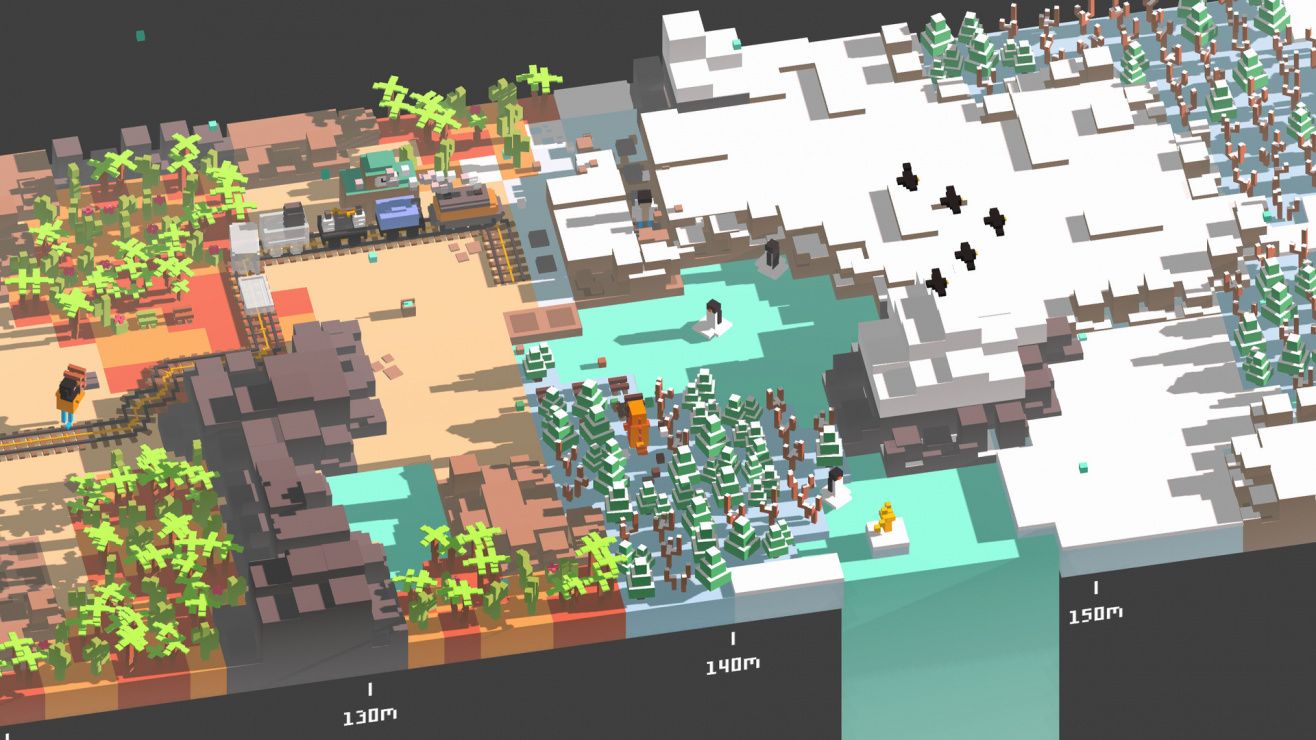 PC Steam Console Playstation action indie Nintendo singleplayer co-op casual
Unrailed! is a chaotic online and couch co-op multiplayer railroad construction game where you work together with your friends as a team to build a train track across endless procedurally generated worlds. Master encounters with its inhabitants, upgrade your train and keep it from derailing! Gather resources and craft tracks to extend your railroad to prevent your train from reaching the end. But watch out - there is only one tool of each type. Co-operation and co-ordination of your team is essential to survive this increasingly challenging journey! Every world is unique! You and your team will have to master ever new challenges to stay on track! Upgrade your train to be prepared for whatever is about to come. Get an atomic engine, upgrade your crafting wagon, attach a supercharger or choose from a vast range of other options. Play cooperatively with up to four players in a single team or challenge the co-op skills of your friends in a two versus two game.
Share Share Share
Promote for 50G

🔹Positive Aspects:
Both relaxing and challenging gameplay.
Amazing soundtrack.
Great performance.
Interactive menu.
🔸Negative Aspects:
Online is basically dead.
emoji based communication does have limitations.
▶️Introduction
Unrailed! is a co-op multiplayer game, your goal is to build train tracks that lead to the next station or checkpoint. This game is all about, timing, consistency, fast-thinking, and efficiency. Keep in mind that there are lots of difficulties awaiting you, like Bandits, outlaws, and even Magical creatures.
Release Date: 23rd September 2020
Last known update: 23rd September 2020
🎩Small-talk:
Is this game another Terraria-styled copy?
Smalltalk
At first, when I started playing I thought that this was an average game, nothing amazing. After some hours and after some legit and challenging online games I will have to say that this game is pretty underrated, it gives gameplay experiences from both worlds. On one hand, you get the relaxed casual gameplay and on the other hand, you get a competitive online match that needs concentration and quick thinking. Overall a great experience.
🎮Gameplay:
Movement:
In Unrailed! efficient movement is key, simply creating 1 block corridors will not work as you will keep on bumping with your teammates or the train will simply push you out. Instead, try to create a 3 block or even 5 block corridor. It will make movement a lot more efficient. The game does offer a Dash ability that allows you to get a sudden burst of speed. Keep in mind that you cannot spam the Dash button as it does have a cooldown. Basically planning out a well thought out route will lead someone to success. Other than basic knowledge you will have random encounters where your control keys get inverted or the map turns upside down, the longer you play the more competitive it gets.
After each completed Biome you get the chance of either upgrading one of your current wagons or completely buy a new one that first your playstyle, the menu explains what each wagon does really well.
NPCs and Train upgrades:
Now when I’m talking about NPCs I’m am obviously not referring to friendly ones, these ones i am talking about are basically linked to the Biome you’re currently in. For example in the beginning you will have to deal with Bandits, they will usually steal one of your resources, usually wood or stone. When they succeed in taking one of your precious items they will go to the edge of the map and throw the item into the endless abyss. In other biomes, you will find magic creatures that will “take control over you”, which simply means that your controls get inverted for some time. The only way to combat that is to either use your Axe/Pickaxe and eliminate them. Another way is to simply not mine the materials around them. What I mean by that is that sometimes you will get lucky and the enemies will simply spawn in areas where they are basically locked in. Just think of it, killing them takes away valuable time.
Other aspects:
Im in love with the Interactive Menu, you basically move your character on each option in the menu which is simply unique and great.
The addition of Emojis do give the game some funny moments but in a competitive setting, it shows the limitations.
Lastly player death and revive animation are hilarious, after getting killed by dynamite your character comes down to the biome again in a parachute, this obviously takes precious time away.
Online matches are pretty rare, so be prepared and find 3 other guys to play with.
🌇Graphics / Audio:
Unrailed! offers a pretty unique art style, really reminded me of Terraria but in 3D. All in all the game gives off solid vibes and atmosphere.
Graphics:
Once again the visuals really aren’t special but the colorful and simplistic visuals really add to the atmosphere; it is a pretty relaxing game as far as visuals go.
Audio / Soundtrack:
On the other hand, the soundtrack is simply fantastic, it changes every time you progress to the next biome. I really like the secondary sounds the game offers, basically the sound of mining or perhaps the dash sound. Everything just sounds relaxing.
⚙️Performance:
In Game:
AMD Ryzen 5 3600 X, 32GB Ram, Nvidia RTX 2070 Super:
I was running the game on Maxed out settings hitting the frame cap ( 60 fps ), without any issues at all.
AMD Ryzen 5 3500 U, 16GB Ram, Radeon Vega 8:
I was running the game on Maxed out settings hitting close to ( 45-50 fps ), without any issues at all.
Benchamarks:
Here is a small benchmark for the Low-End device as a benchmark isn’t really needed for a HIgh-End device.
Max Settings 1080p, 5 minutes in the first Biome:
Average framerate : 47.0 FPS
Minimum framerate : 0.6 FPS
Maximum framerate : 60.1 FPS
1% low framerate : 9.6 FPS
0.1% low framerate : 0.6 FPS
Bugs / Glitches / Crashes:
In 6 hours of building trains and getting annoyed by my own stupidity, I experienced no bugs, glitches, or crashes, although I had one small complaint with Save files. Without using them at all the game was simply deleting them.
⚖️Conclusion:
Unrailed! is both a relaxing and challenging title, it relaxes you with its casual DNA of the nice soundtrack, colorful art style, and simplified controls, yet all of that becomes challenging with time pressuring you, especially in online matches. Sadly online matches are pretty rare to find which might make this game no seem so good after all.
📉Overall rating: Save for later (60-80%)
Date of the Review:24.10.2020
Visit SaveOrQuit.com for detailed game reviews, posted daily!

Adorable fantastic masterpiece with excellent visual style. I love it, it's fun and works great as a coop game with friends. Runs natively on Linux.

It's the chaos and coordination of Overcooked, but with trains instead. Kinda fun. Kinda painful. Always moving forward. And be weary of the weird robot that humps you relentlessly if you nudge him all the way to the start button.
In all seriousness, the game could benefit from a few fixes:
- allow me to switch between keyboard and mouse if I'm solo on the computer
- a button to change the map seed -- typing in to the control is awkward
- ability to pan/zoom/rotate the map so you can see behind things and have an idea where the end is, given that someone with an ultrawide monitor can see the end but normal 16:9 users can't
- maybe being a little cheaper (it's clever, but there really isn't a whole lot to it)

We are doing game nights with friends, where we usually play around 4-5 games per night. We are playing games that are designed only for up to 4 players on one screen. Do you need and better review than the fact, that after we said "we´ll just try it" we never really changed the game and spend with unrailed 10 hours straight?! I think that this is quite self-explanatory, now go and put some rails on!

Unrailed is a game where 1-4 players work together to build a train track, guiding the train between stations and avoiding obstacles. The difficulty scales based on the number of players in the game, and there's a bot to assist you in single-player, so any number 1-4 is viable. You can either play with friends or queue up to play with random people. I personally always play with friends, so I can't comment much on either single-player or playing with randoms.
Playing with friends in Unrailed is a lot of fun. Voice chat is, IMO, necessary to play because good communication and teamwork is essential. Having everybody coordinated is essential to keeping the train from crashing, especially as the train speeds up and as you get into harder difficulties and biomes. If you can get your team working well together, you can build up a bunch of resources and have a really efficient train. It's also a lot of fun figuring out how to solve problems and plan ahead together.
The longer your track gets, the more challenging the game is. The train speeds up station by station, and upgrading your engine brings you to new and challenging biomes. The first time you play the game, it is going to be rough, because you won't know exactly how to overcome the obstacles ahead, but as your team gets better, you get into a strong rhythm and are able to make better train choices.
Overall, Unrailed is a really fun and challenging game to play with friends. Whether trying to collect all the achievements or just trying to beat your high score, there are lots of goals to strive for that will keep you playing. The game has already seen a lot of improvement so far in Early Access, and I'm looking forward to seeing how the game progresses in the future. 10/10

Give us checkpoints at every station if you (devs) want a thumbs up. This is not a threat.