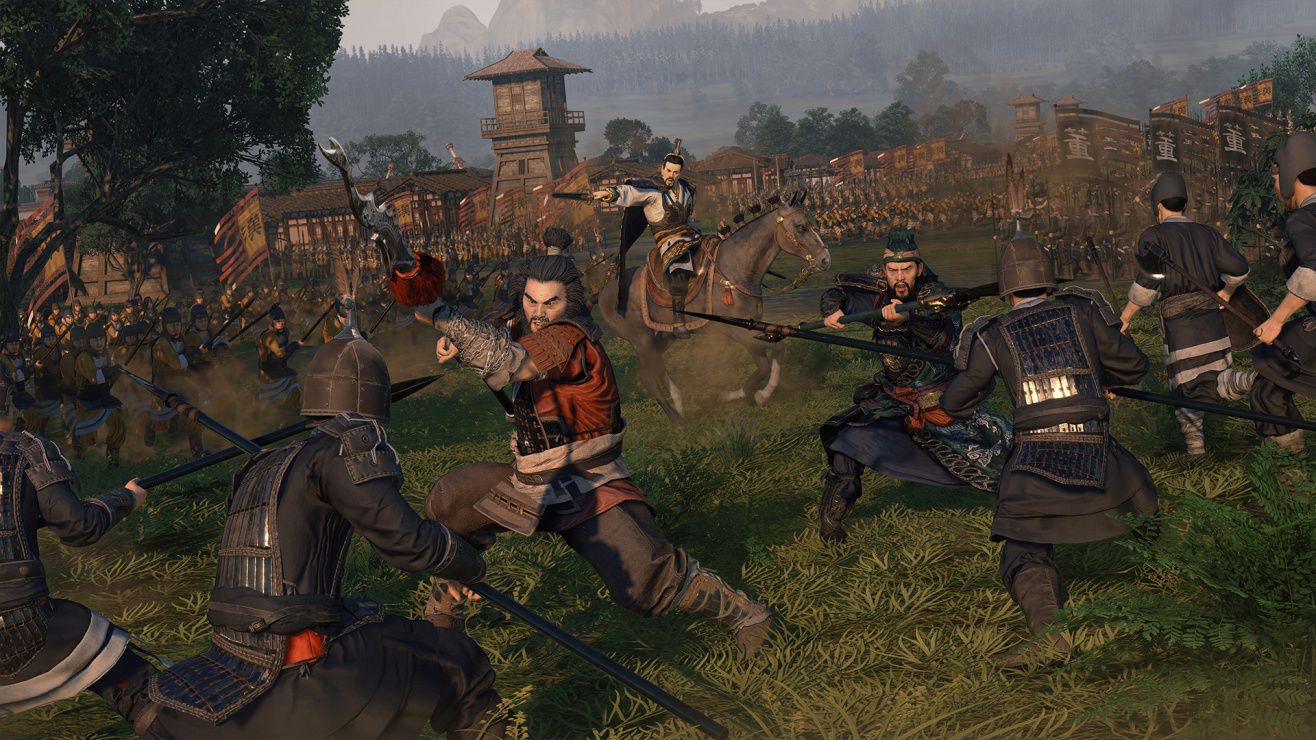 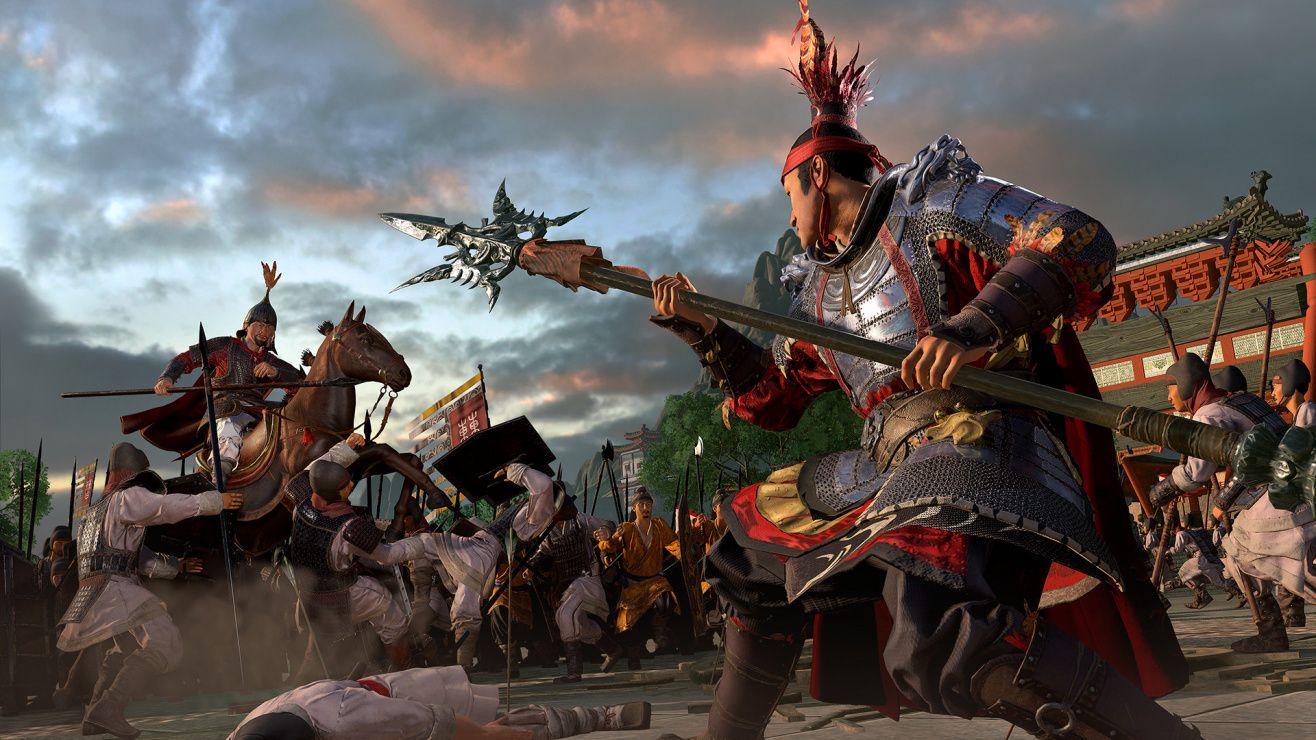 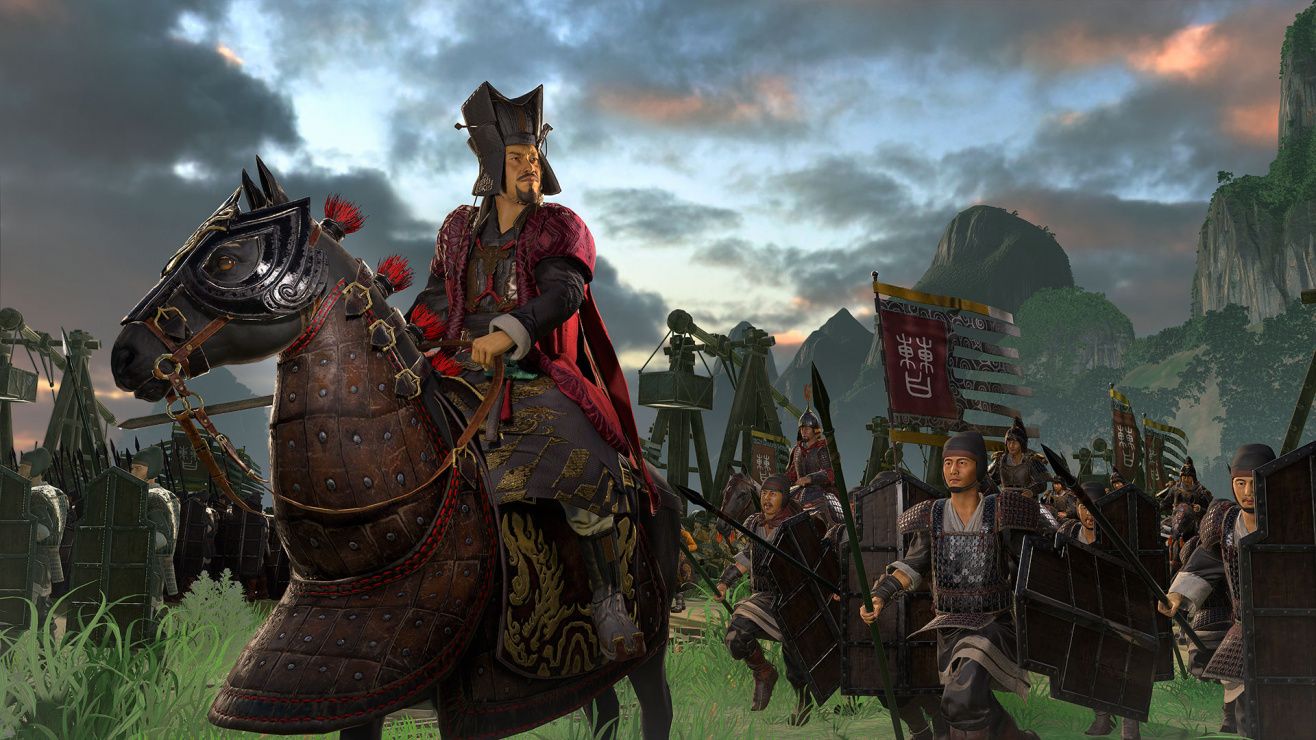 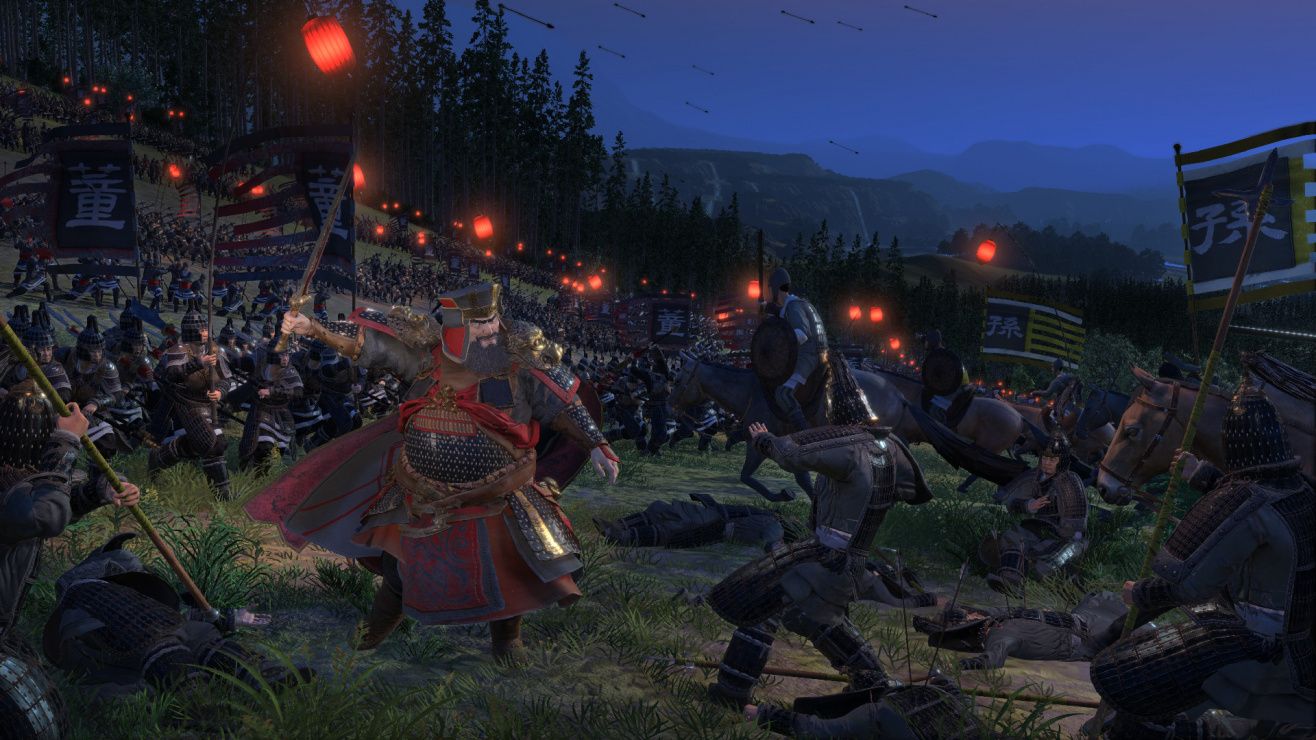 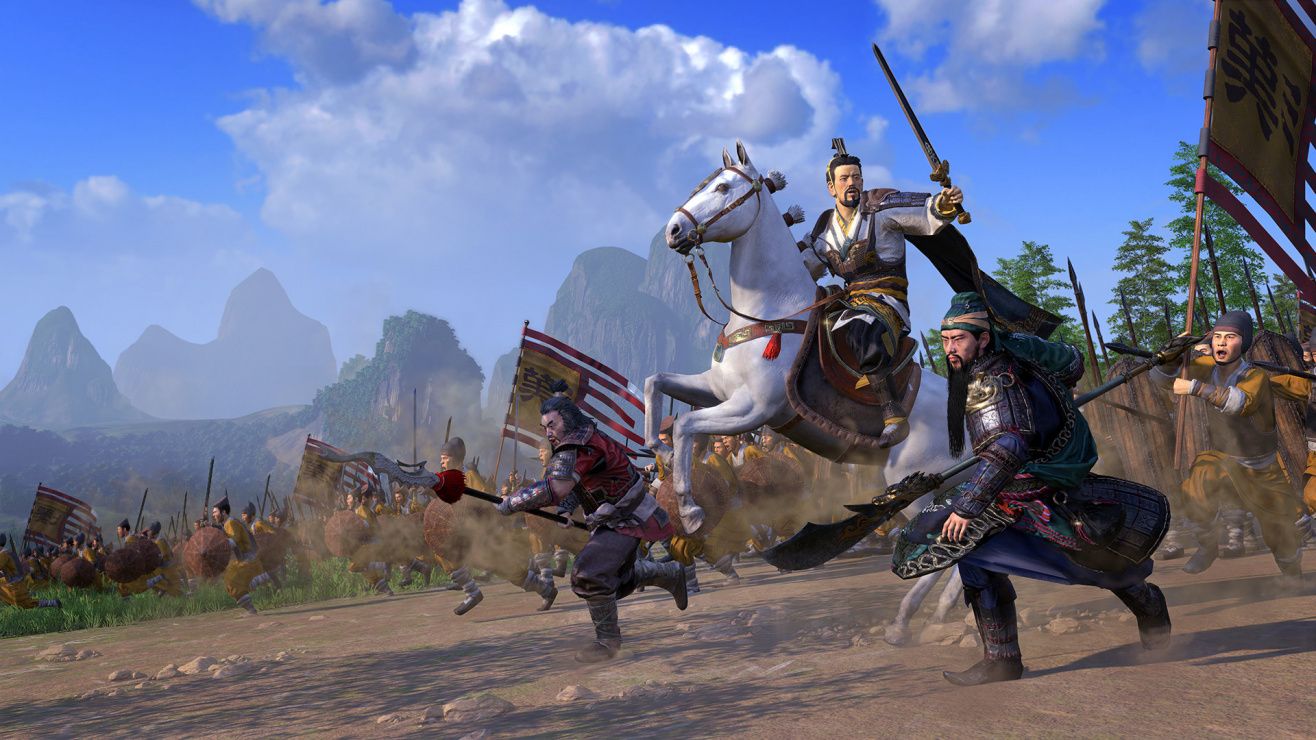 PC Steam singleplayer multiplayer strategy war sword historical china melee time real
Total War: THREE KINGDOMS is the first in the multi award-winning strategy series to recreate epic conflict across ancient China. Combining a gripping turn-based campaign game of empire-building, statecraft and conquest with stunning real-time battles, Total War: THREE KINGDOMS redefines the series in an age of heroes and legends. China in 190CE Welcome to a new era of legendary conquest. This beautiful but fractured land calls out for a new emperor and a new way of life. Unite China under your rule, forge the next great dynasty, and build a legacy that will last through the ages. Choose from a cast of 12 legendary Warlords and conquer the realm. Recruit heroic characters to aide your cause and dominate your enemies on military, technological, political, and economic fronts. Will you build powerful friendships, form brotherly alliances, and earn the respect of your many foes?
Share Share Share
Promote for 50G

I think by now I can safely say that this is the best Total War game I've ever played.
Pros:
+ Three Kingdoms takes place during 3rd century China, heavily based off the 14th century novel about the time period. It's absolutely beautiful, and ancient china is as unique a setting as you can ask for.
+ The game adapts the "Game of Thrones on steroids" idea of the novel extremely well. The game is very character focused and has similar elements from games such as Crusader Kings 2. Think along the lines of marrying a general's daughter to a faction and then having her show up in a battle against that same general 5 years later.
+ The game's main campaign mode "Romance" allows for your generals to be much more powerful and heroic than they would regularly be, means that they can single handedly take on units of enemies. This allows for an added element of epicness in your battles and feels really fresh and fun in battle.
+ Adding on to the above point, the "duel" system in which your general calls out another to engage in a 1v1 duel is some of the coolest stuff I've ever seen.
+ Diplomacy in 3K is probably the best in the series. While it is a bit janky at times, the amount of options you have for engaging in diplomacy with another faction makes it feel fun and essential to a campaign, rather than being a means to an end.
+ Since the novel is very character-driven, the different factions that you can play as all have their own unique playstyles. While you can play as one of the three main characters, you can also play bandits which can act as mercenaries, traders which incredible manipulations skills, warlords who are unmatched in battle (Lu Bu = Lu Bae) etc.
+ The progression system in the game is fantastic. It's hard to describe, but something about it just feels right. It's very satisfying to work your way up from a small lumber yard to an empire.
+ The entire Total War formula feels very refined in the game. From battles, to factions, to campaigns, it all feels very polished and at the peak of its potential.
Cons:
- Unit variety is limited. There isn't a lot of variety after basic archers, cavalry, and infantry.
- Some mechanics in the game are slightly vague and take a bit of figuring out to understand. For example, you could have people in a city be extremely happy one turn, and extremely angry in the next with the only indication being "population".
- While the customization system is great, you're not given enough things to actually equip to your characters. The chance of finding a weapon or armor that would actually benefit a character are maybe 4 times a playthrough.
Verdict:
Three Kingdoms is the most character driven and personal Total War game to date. The amount of new gameplay possibilities that come with that statement make the Total War formula feel incredibly fresh and fun. It really feels like CA hit the nail on the head with this one as all the Total War mechanics we know and love feel extremely polished and well-done. Not only that, but the new additions fit right into the game. If I had to describe this game in one sentence, it would be "Total War meets Crusader Kings 2 meets ancient china with a sprinkle of Dynasty Warriors."
Score: 9/10

I recommend to buy this game when it sale for 50%

Surprised I didn't have to pay $4.99 to write a review

If you are not Chinese, you probably have a hard time imagining what Four Masterpieces mean to us. When I was a child, I used to read Romance of Three Kingdoms twice a year during holidays. We were eager to experience that part of the history covered by the fog of war and politics via video games. That was exactly the time when the art of war in ancient China has reached a whole new level. During a very long time, our only options are games developed by KOEI. Don't get me wrong, their games are great (well at least some of them are). And you know what? You changed this situation. Now if you ask a Chinese player what is the best game based on the history of three kingdoms, their answers are probably gonna switch to the Total War series.

Its has a much bigger map than normal total war games.
Pros - good total war game that will pass your time.
New scenario map
Cons - Feels like shogun total war where everyone has the same units.
most game mechanics don't mean to much ( Spies, Family tree...)
Overall good game if you can get on discount - I would pay 20 $ to 30 $ for it.

I've been a fan of Total War games, but I've typically stayed away from ancient/classical warfare titles like Rome, Shogun and Medieval. I've gravitated more to the early-modern titles like Empire and Napoleon. So, by all logic, I should have avoided this one.
Why?
Well, despite this being yet another rendition of ancient warfare, it's set in a period of history that I am not very familiar with (the eponymous Three Kingdoms Era of Chinese history, and the fall of the Han dynasty). Based on the famous historical novel Romance of the Three Kingdoms, TW3K allows you to take on the role of one of many warlords during this period and forge a new dynasty for China. This game was really my first true exposure to this period of history and all the fascinating characters that inhabited it. I suspect the story is much the same for any other Westerner playing this game. I can say definitively that playing this game made me want to research more about the Three Kingdoms period and its prominent actors (my personal favorites are the Sun family).
It's obvious to me and anyone who plays this game that the dev team cared a great deal about the history behind the game and great care was taken in its portrayal of Chinese culture. I have to commend Creative Assembly for their fantastic presentation, as I find it respectful, fun, and immersive. For me, it's gotten to the point where I've grown so attached to characters that I will even restart a game if I lose one I really like. Not many Total War titles cultivate that attachment to your army commanders and government ministers.
The game's greatest strength is its personality. In fact, this is the first Total War game I've ever played where character relationships and personalities play a vital role in government, army composition and diplomacy. In the Total War games I've played, character relationships didn't really matter; you would just choose whichever character's traits best lined up for the job, plopped them into a role and promptly forgot about them. Here, you have constantly monitor your characters' satisfaction, their traits, and their relationships with other characters in your faction. I've seen characters who were oathsworn at the beginning of the game drift apart and become rivals, and vice versa. This adds to replayability as no two games play the same way, thanks to the small changes in characters.
Not only that, government management and army composition matter much more than previous titles. You have to keep a balanced army if you want to win on the field (usually this means cavalry-melee/spear infantry-archers/artillery) and have to be considerate when building your generals' retinues to better support each other. It adds another layer of strategy in an already complex game. Because of the aforementioned character traits, you have to keep a constant eye on your ministers and make sure they're doing their job well and not developing traits that can give you debuffs. It adds more complexity to an already complex game.
Finally, diplomacy has been massively reworked and I love it all the more now. Diplomacy has historically been one of the more frustrating aspects of Total War titles for me, as I can never tell just what the other party wants in negotiations, even when I think I'm giving them a good deal. Now, thanks to modifiers, quick deal options, and the "make this work" button, I have a much clearer idea of what factions look for in negotiations. It's made what was once the most irritating features of Total War now become one of my most loved. I can only hope that CA will maintain this model in its future games, as its improvements are nothing short of invaluable.
I never thought I would have this much fun with a game set in the ancient world, let alone ancient China, but I have been pleasantly surprised by TW3K's impeccable presentation, colorful personality, riveting gameplay, and the dev team's great care in supporting this title. CA, if you read this, thank you so much for making what may be my new favorite Total War game.
To everyone: check this game out, and above all else, DO NOT PURSUE LU BU.

Best campaign map experience of all Total Wars I've played(and I have played all of them).
Pros:
- Best campaign map experience
- Timeperiod which fits Total War
- Much immersion
- Fun battles
- Duelling is a fitting mechanic
- Lovely graphics
- Great tech tree
- Colorful characters
Cons:
- Might be harder to get into if you are unfamiliar with the book/historical period
- Some redundant units
- Southern part of map a bit bland