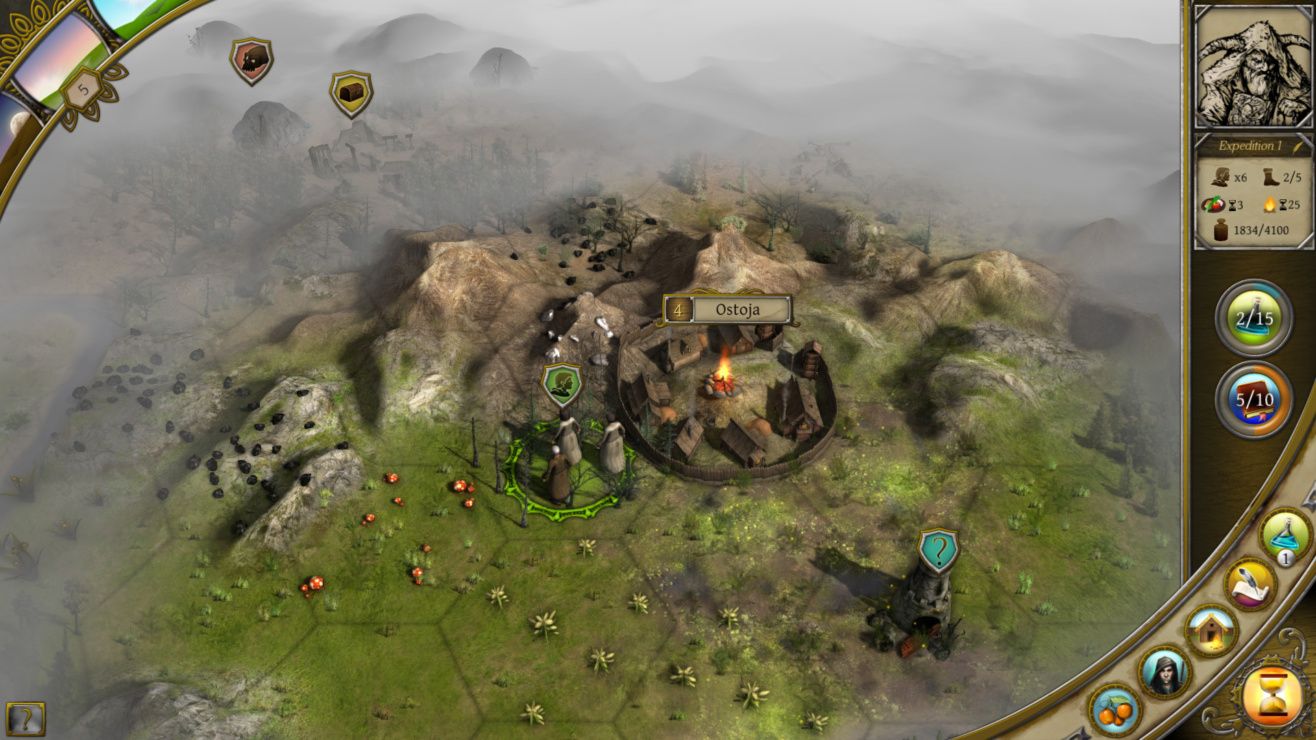 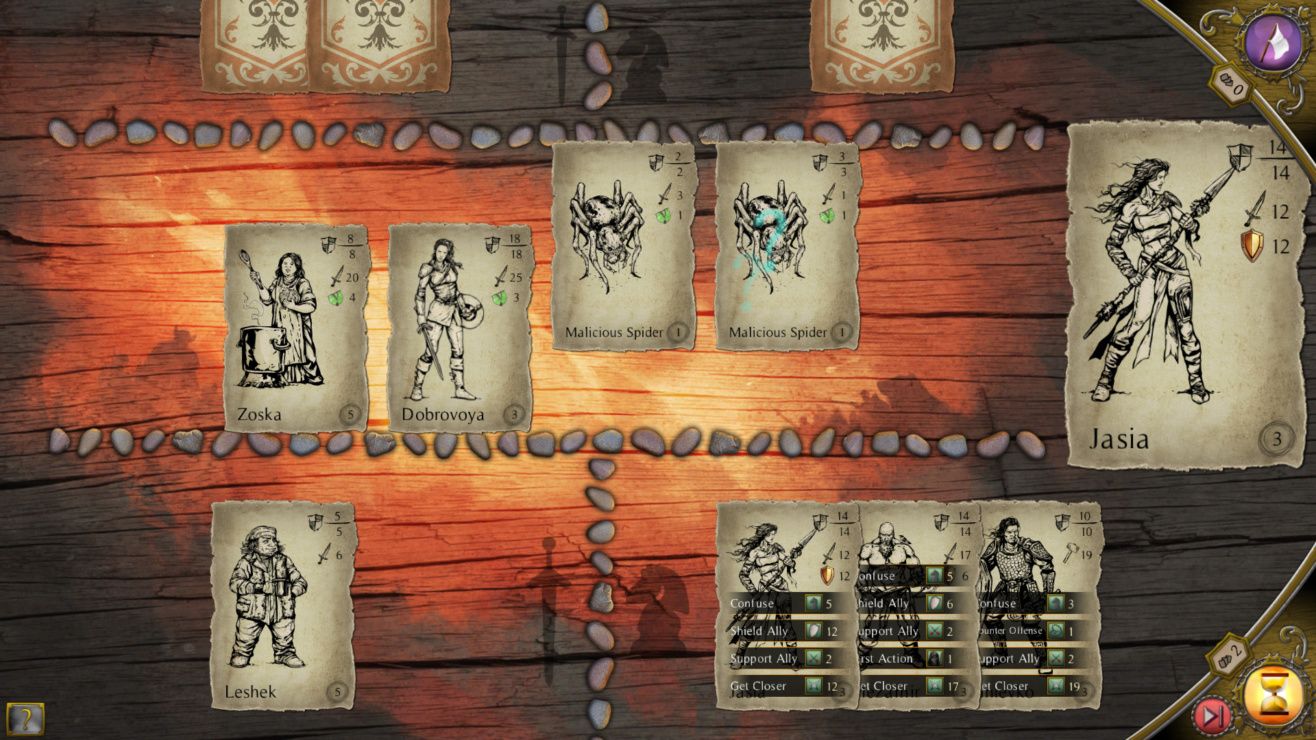 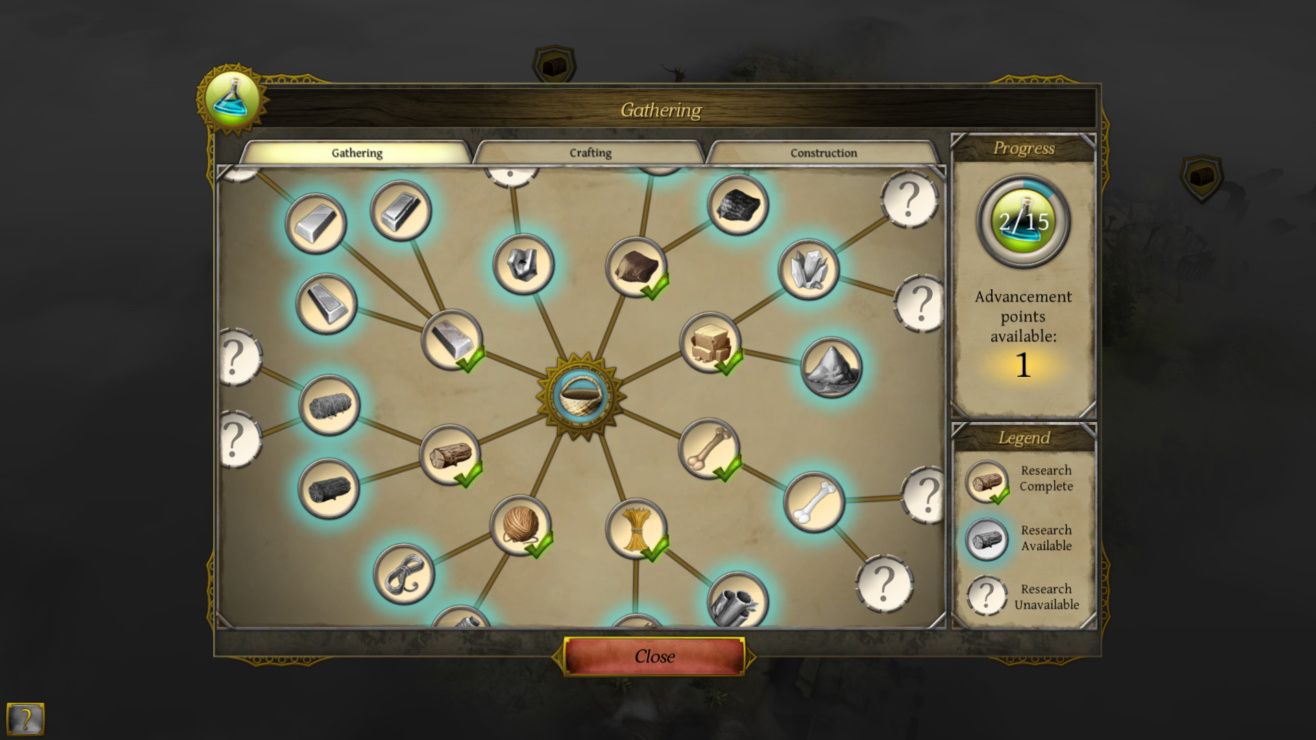 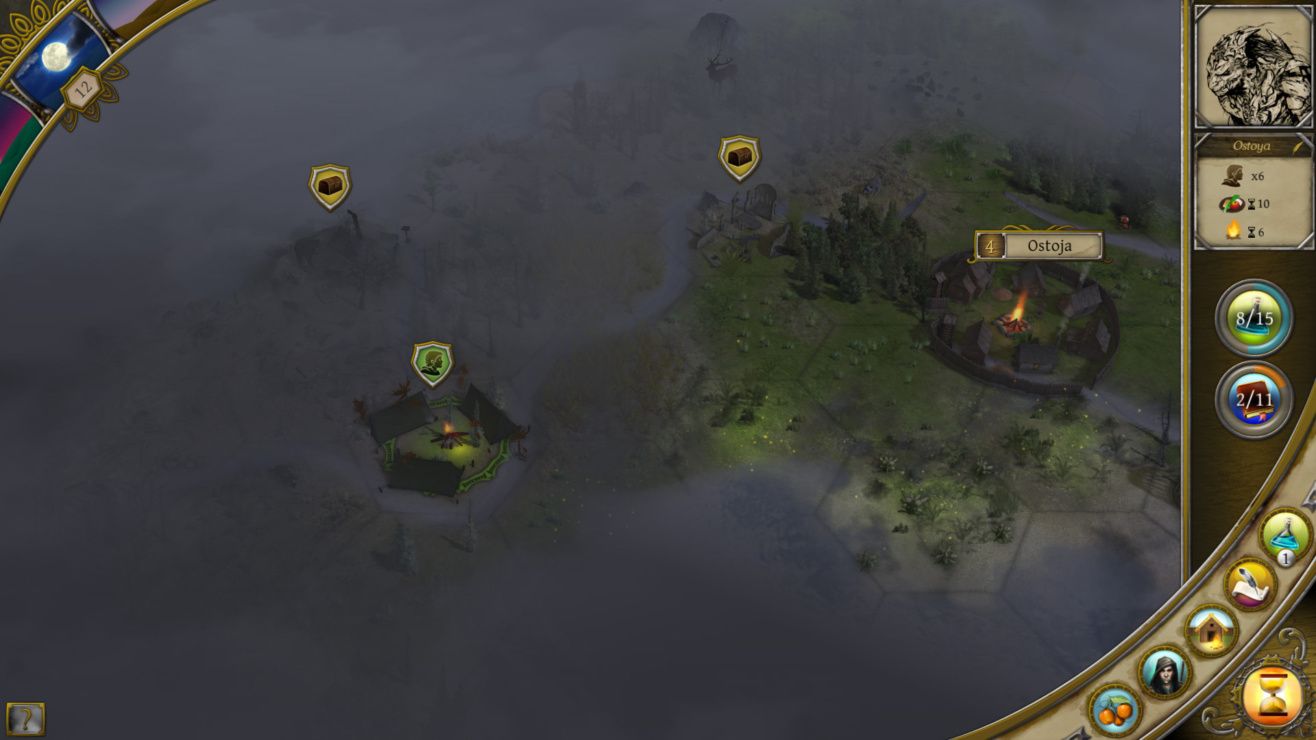 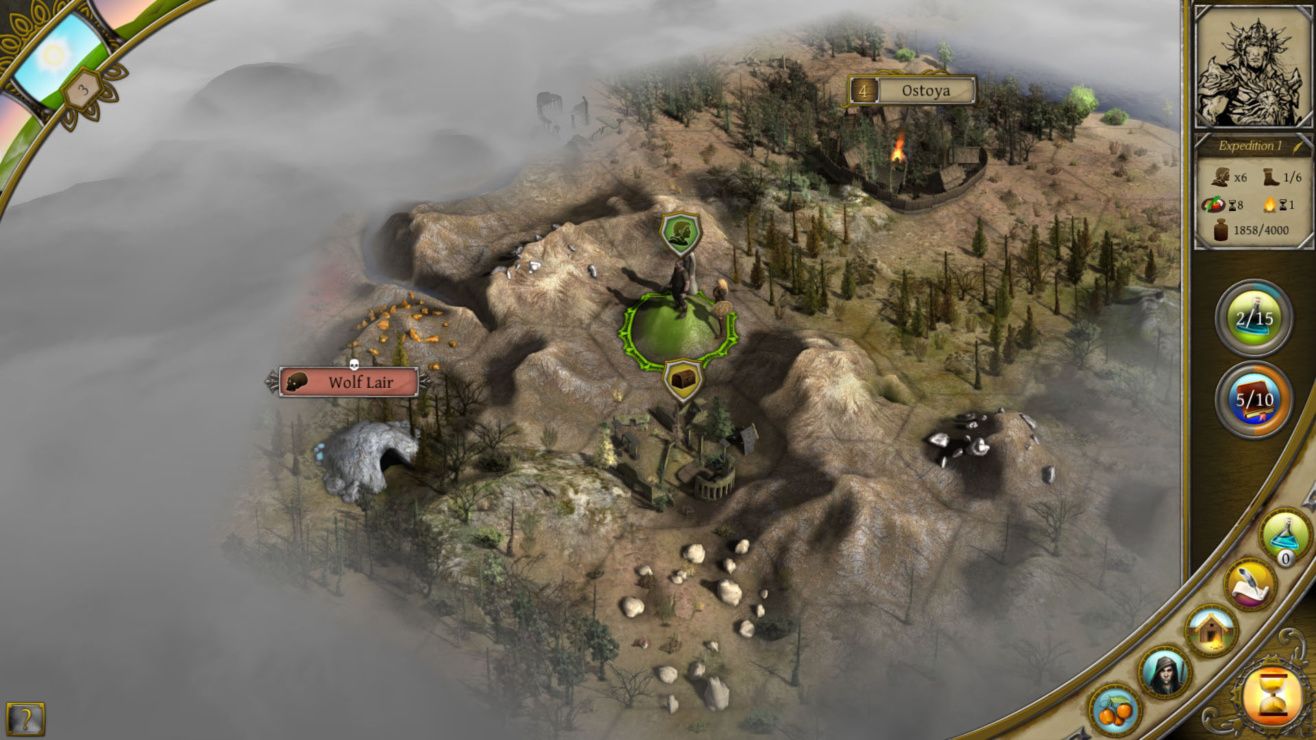 crafting fantasy indie mythology rpg strategy survival
Thea: The Awakening is a turn-based strategic survival game steeped in Slavic myth and monstrosity set after an apocalyptic force known only as The Darkness has engulfed the world. There are Strigas and Baba Yagas aplenty, but there are no heroes, no monster slayers, and no great armies capable of banishing them. You have only a few hopeless and starving survivors who are desperately trying to stay alive. You are their last and only true hope! The game combines turn-based strategic game play with the tension and grit of a rogue-like, a captivating story you can uncover through a series of in-game events, and a unique combat system based on a complex card battle game.
Share Share Share
Promote for 50G

A Review of: “THEA: The Awakening”
A Single-player, 4X Dark Fantasy, Hex-Grid, Turn-Based Strategy-RPG, Card Battler, Resource Management Survival Game where Choices Matter with Crafting and Replay Value.
I’m usually either a fan of Grand Strategy games or RPGs, turn-based War-games and War-sims. I had this game in my library a couple years before getting around to trying it out. Now that I’m playing it; it’s great or certainly could have been with a few GUI and QOL improvements.
It’s very RPG-like, with lore and Slavic-based mythos. I love deep lore games that tell a storey (BG / Planescape). I also like games that base their lore on “real world” mythos (Inquisitor) and this game makes tons of references to eastern European folklore.
It’s a Card Battler, or at least the combat portion of the game is. Combat can be based on any of 38 possible character stats! A mid-level character will normally see about 24 attributes, but with random levelling and specific gear bonuses you can hit 30+. Regardless of gear it’s nearly impossible for a character to possess ratings in all attributes, however a well rounded and geared war party (expedition) should have them all and be able to deal all damage types. It is possible to have a single character with 30 or more attributes and effects at the same time – so if you’re a stats nerd like me – whoohoo!
Speaking of RPG-nerd things: You can attract/recruit/find characters of 19 main classes/races such as: Bandit, Beast, Craftsman, Demon, Dwarf, Elf, Gatherer, Ghost, Goblin, Hunter, Inventor, Medic, “Mythical Creature”, Orc, Scavenger, Troll, Undead , Warrior and Witch/Sage. Starting class/race will give you bonuses in various attributes, as well as a higher likelihood to advance along their “favoured” class attributes when levelling semi-randomly, i.e. Craftsmen are much more likely to get a craft point than a Warrior and because Gatherers are often resource mules they may often build strength as fast as a Warrior.
RPG-nerd nirvana continues as: Beasts actually come in 20 flavours, Demons 21, Dwarves 6, Elves 4, Ghosts 8, Goblins 6, Mythical 6, Orcs 4, Undead 2 and all with different levels of usable attributes; so you will always have a new way to build your army.
It’s a pick your adventure, choices matter, storey-based game. Which god you decide to serve and how you decide to pursue their and your goals can make a large difference in how you approach the dozens of quests in the main-line quest and the 100’s of optional challenges (mini-quests where you -usually- can choose how you best them). Speaking of storey, nearly all the quests/challenges are voiced; and the voice acting is very appropriate in that 80's baritone narrator fantasy movie type way.
It’s a city builder, well a part of it is. You build your city, collect local resources, to fuel your research, to craft weapons to outfit your armies. Meanwhile you must make food to provide for your village and its’ expeditions, so you can expand your city’s reach and outfit bigger expeditions to conquer tougher challenges and get more resources etc. etc.
It a turn-based strategy puzzler, some portions are very reminiscent of the best parts of Mount and Blade; but world-map movement is turned based and depending on the starting conditions you choose can take you 200+ turns to clear a medium sized map and 400+ for a larger map. Note although the main quest line can be beaten in under a 100 turns you will still have the choice to carry on for 100's of turns more to fulfill all types of challenges that fill-in your understanding of a very colourful world.
Me, I like all the above points so if anything I’ve mentioned so far does not tickle our fancy – this game might not be for you.
Points to improve on:
GUI: This game has TONS or character and gear management, but a very sloppy inventory system, it can take literally 100's of clicks to re-outfit your party before they set out… This is tedious and very unnecessary. It seems in the sequel (I’ve not played yet) they have moved to an inventory that looks more like a sortable EXCEL sheet, which is fine with me as it would be better than what’s in the original game.
Sloppy code: For a game that is not cutting-edge graphics the game loading and turn processing seems pretty slow. For a game that can be 100's of turns long this is a major detraction.
Game Saves: Only “1” save slot, that’s one-save-slot! Is this an ‘80s console game? In deep games like this I often like to have multiple games running (not for save scumming purposes)… but with all the Map, Starting Difficulty (65% to 350%), patron god (8), character, party, quest and challenge choices you can have it’s nice to be able to boot up a few turns of an easier game on a smaller map, then go back to your humongous map uber-hard game. This game says NO, you make your choices and stick with them for 297 turns until you are sure you have beaten that horse dead, then fire up a new game.
Scoring:
Playability (does it run well), 7/10
Fun, 9/10,
Replay value, 8/10,
Graphics, Maps, UI, (nice maps and handrawn character cards, terrible UI), 6/10,
Sound, Music, Voice Acting, 8/10,
Overall: 7.5/10
Would be a higher score if such addictive/fun game play wasn't slowed by such a clunky '90s UI.
I would recommend this game to any RPG-lover, city-builder or card battle fanatic.

Very interesting X3 game. It includes many "strange" game mechanics and surprisingly they blend quite well together! Card based combat is something I didn't expect but it's really fun. You need to keep an eye on armor, shielding and damage in "normal" combats but you also have to pick diversed crew members for "challenge-combats". It's good to have a medic, sage/witch, hunter, not just fighters in your party. All characters gain new levels and become more powerful with time. You can make them even stronger by equiping them with weapons, armors, shields etc. You can either get them as rewards or craft them. Crafting system is really extensive - making the most powerful items requires a lot of rare materials making it challenging and satisfying. However when your colony reaches above 15 people all of these micromanagement becomes burdensome. It takes too much time to give orders, dismantle items, craft new ones, compare stats etc. User interface is a little clumsy and it doesn't make things easier. Another thing I didn't like is... how should I put this? There're many "fresh ideas" but not all of them are good. I didn't like two "core-ideas". First, you can't expand. You start with one capital city and you can't found another village. I don't know who came with the bright idea but it wasn't smart move! Second, you have got to draw your hand before each combat. Sometimes you can be unlucky and draw unwanted cards... I'd rather pick them all by myself. So in closing, let me sum it up; there are some annoying disadvantages but did they ruin my experience? No, they did not. Thea is really fun to play but it's something different and my guess is not everyone will like it.

It's a 7/10 game (destructoid scale, not IGN scale) that gets bumped up to 8+/10 simply because it's that darn unique. It can have some sudden difficulty spikes, especially in quest progression, so I'd recommend running games with manual saves until you've got a feel for when to progress the various quests. You do actually have some proper choices with consequences, and there's a surprising depth of content in here. It's not for everyone though, and a playthrough takes a long time. I'd say you need to be prepared to play for at least an hour at a time for this game to work, and a campaign often takes 10 hours at least for a win (you do get some unlock progress even if you fail). Not for everyone, but highly recommended personally.

This is such a fun, underrated game with quite the unique lore and variety. I've played through the game once on my own and am currently playing it with a friend and honestly it's worth taking a look at if you enjoy turn based rpgs and mythology! I especially like the combat system. It's a simple but challenging card game that you can choose to complete automatically or manually for a more intense and epic fight. It's honestly a pity more people haven't played this game because it's really really good

I love this game and I am SO sad that Thea 2 turned out as bad as it did. My ~200 hours in this game attests to the awesomeness of this game

Great setting, great unique card game, and a fun little 4x (give or take expansion - you only have one village but your population grows over time). Has a little bit of everything - role playing, resource gathering, tactics, crafting, inventory management. Many systems to figure out and juggle. Not perfectly balanced, but incredibly replayable.

Like a lot of people reading this, I'm a big fan of resource management, of exploration, of rogue-likes, of Civilization-like games. So I was definitely curious about this one. So is this a good game? Is it worth playing? I'm going to give it a "Yes, but..."
For those of us (like me!) who play many polished games, it's a bit odd to settle into a lower-budget game. But that's part of this game's charm. It feels ambitious, because you can feel their vision scraping against what was possible to pull off. It It feels ambitious because you can you feel the fun game design, the love of the genre, the joy of computer games shining through the constraints. And in that sense, even when you come across something that isn't perfect (the UI, say), there's a relative joy to this game.
That being said, there's lots of little problems. Their minigame system interestingly tries to handle everything: battles, sneaking, diseases, etc. And it almost works, but not quite! The characters end up feeling a bit unrewarding, without skill trees or abilities, and instead end up feeling a bit micromanage-y. It's very difficult to gauge the difficulty of battles. The writing is odd. (Why are my dialogue options so jaded and passive aggressive?)
So if you're looking for a "normal" gaming experience, I'd recommend going with something with a bit more polish, like Endless Legends (with the DLCs), which is a great little romp similar to this. BUT if you've been around the block, and think it might be fun to fiddle with something with personality... then this game is perfectly enjoyable, faults and all --- just as long as you're not expecting a game that nailed to perfection everything it set out to do.
(Side note: This game kind of reminded me of the Fall From Heaven mod from Civ 4, or Kings of Dragon Pass from iOS. Anyone play either of those games? I kept thinking of them while playing this.)