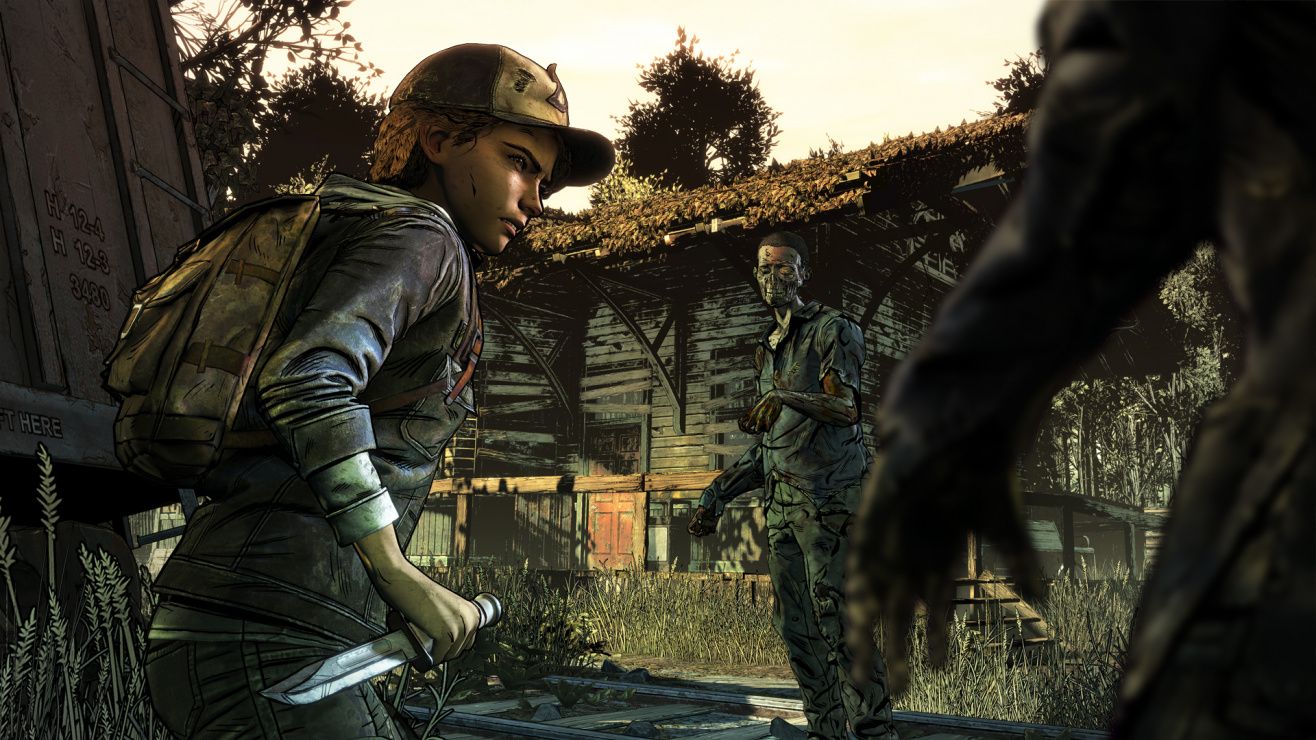 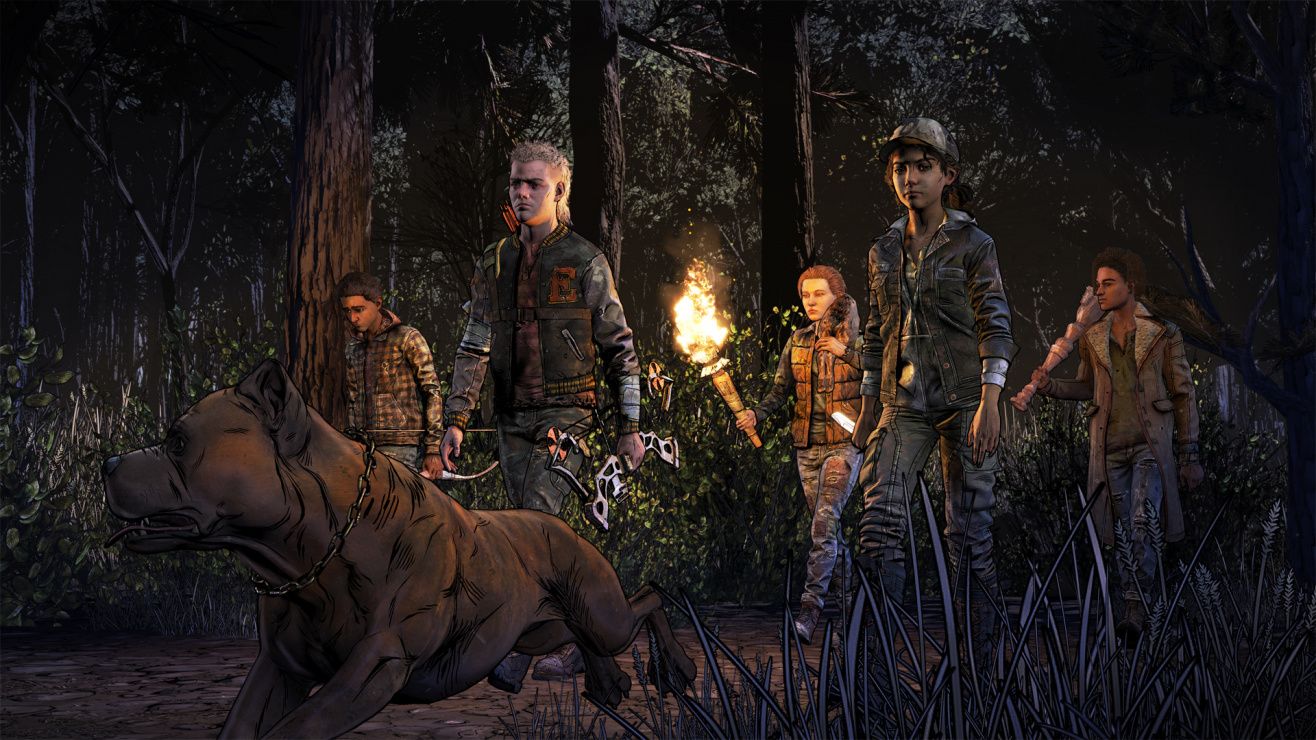 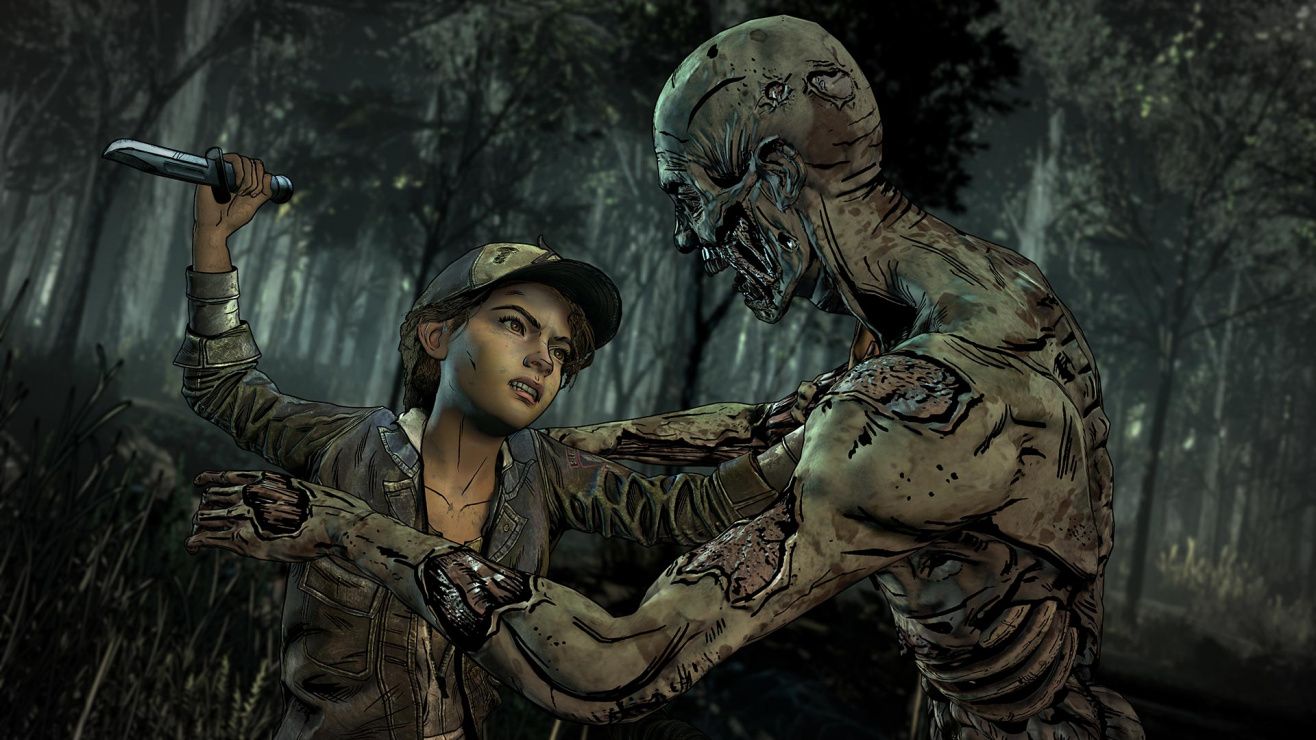 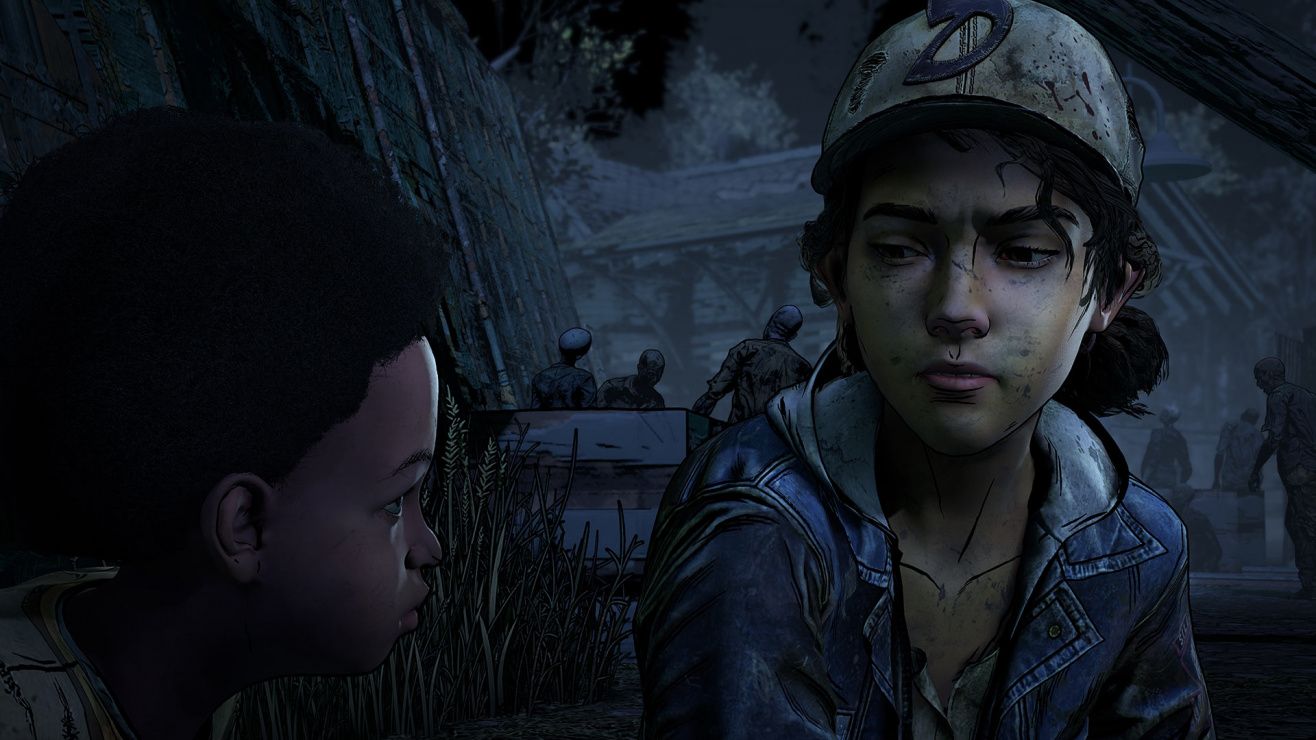 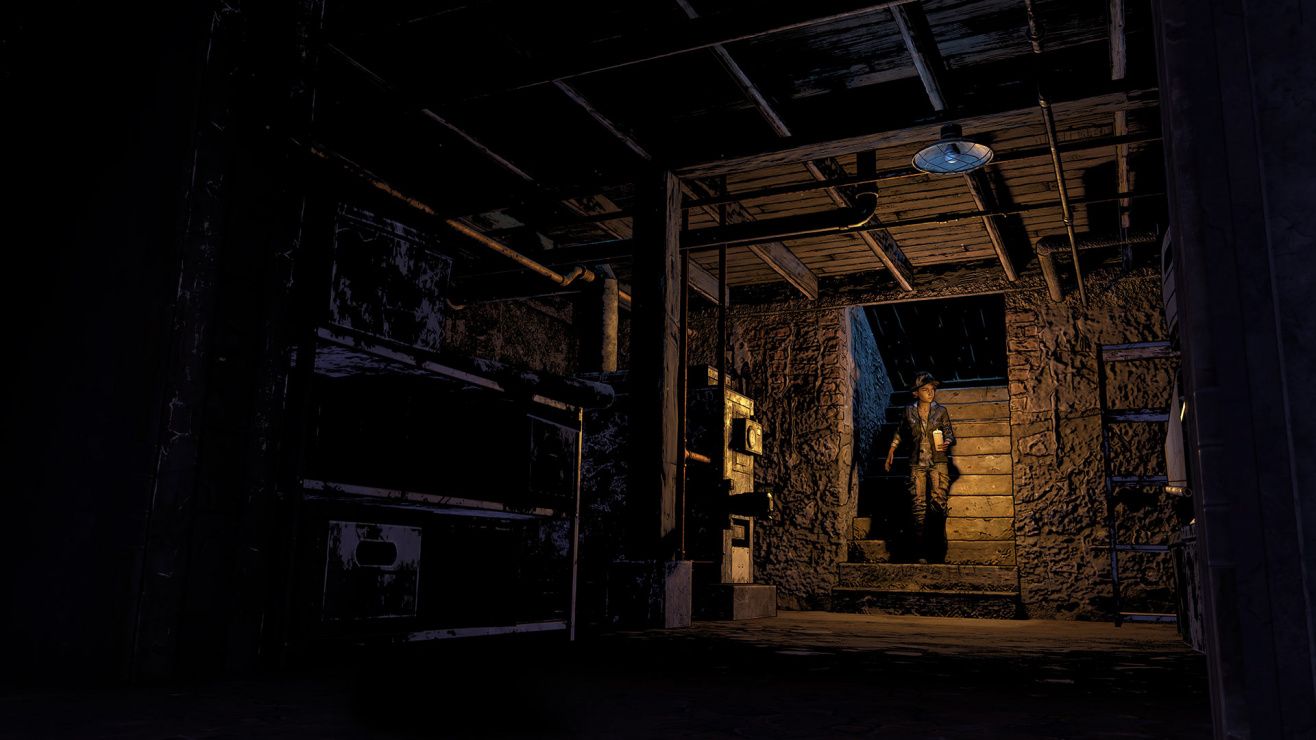 The Walking Dead: The Telltale Series – The Final Season

PC Steam Console Playstation Xbox adventure Nintendo story survival zombie undead choice
Previously purchased your Telltale’s The Walking Dead: The Final Season – Season Pass here? You'll get automatic access to Episode 4 here on Steam. Episode 4 releases March 26, 2019! Clementine, now a fierce and capable survivor, has reached the final chapter in her journey. After years on the road facing threats both living and dead, a secluded school might finally be her chance for a home. But protecting it will mean sacrifice. Clem must build a life and become a leader while still watching over AJ, an orphaned boy and the closest thing to family she has left. In this gripping and emotional final season, you will define your relationships, fight the undead, and determine how Clementine’s story ends. Emotional, Gut-Wrenching Story - See Clementine’s journey through to the end. As she builds a new life, you will have to grapple with new types of choices and live with the consequences as AJ looks on, learning from your every move.
Share Share Share
Promote for 50G

This review tries to be a spoiler free review, I hope I am not failing on this one:-)
The game started with a summary about the previous games. Within a few seconds I was already crying, and wasn't the last time. The whole game is an emotional rollercoaster and it finishes the Saga of Clementine. If I could recommend only one story rich game to someone else and I could recommend all 4 Telltale TWD as one game, then it would be this series.
If you have not played any previous one, then go ahead and start with the first one. Clementine is not always the protagonist of the series, only in the 2nd and this one, but both the first and third game are very important chapters to get to know her. During the first game we played as Lee, who protected the 8 years old Clementine. I believe this role, protecting her during the early Zombie apocalypse was very special and an important milestone, what made the whole series successful. I needed to protect her, save her from everything and during that Clementine earned a special place in my heart. Later, during the 2nd and 3rd game when she cried, I was also crying, when she felt rage and wanted revenge I was angry too.
Life is rough in a zombie infested world. Just like in previous chapters friends are dying, we always find new threats and enemies. In the Final Season Clementine is now in the role of Lee. She needs to protect AJ, a young boy. Is it possible to save and mentor someone without sacrificing yourself? Is it possible to find a safe haven that could be called home? It is up to you to find answers for these in Telltale's The Walking Dead, which might be the best story oriented video game series of the century.
Conclusion
The Saga of Clementine, all 4 games are a MUST TO PLAY if you are looking for an extremely touching and emotional story. Prepare some handkerchiefs, you will need it.
Story: 10/10 I can’t give a separate score for this game, the whole 4 games clearly a 10/10. About a lightyear better than the TV show.
Voice Acting: 10/10 Telltale always cared about quality voice acting.
Replay value: 4/10 Story rich games usually don’t have huge replay value but this might be the only game I'm going to replay, together with the previous 3 games…. once.
Atmosphere: 10/10
Visuals: 10/10 Upgraded graphic compared to previous Telltale games and the art has some comic book feeling. I loved it.
Music/Sound effects: 10/10. Quite nice soundtracks and environmental sound effects.
Game difficulty: 2/10 Quick Time events are quite easy. You will die a few times but finishing the game is far from being challenging.
Hey, I am an achievement hunter!
Perfection time: ~14-15h. There are exclusive achievements based on your decisions. Sometimes you can just quit fast to the main menu then continue the game and go for the other decision but for some you need to replay episodes and this is where the game gets my only complaint. You can’t replay subchapters, just the whole episode.
If you liked the review or you like to earn achievements, but in enjoyable, fun and entertaining games, then please follow my Average Achievement Hunter curator or just check out our curated games. Thanks

I wanted to replay it again to explore other options, but my heart could only take it once.

How to make a grown man cry simulator :'(

Raising a psychopath
The final season is here and it ends the long journey. How long has it been since the first game? Eight years? The series had its ups and downs but in my opinion first and the last seasons were the best. New frontier being the weakest one.
So Clem is basically grown up now. It was so good to see her growing up through all the games, you start feeling connection with her and caring for her, that's how main characters should be done.
Clem acts as a mother now by taking care of AJ and teaching him stuff. You can decide how to raise him. I decided to make a psychopath out of him and I am so proud. “Stealing is ok”, “If anyone steals from you, kill him”. I'd be a good father I guess.
Clem is a real badass and AJ is too. The whole game evolves around them for the most part. AJ is a kid who doesn't remember how the world was before walkers appeared and everything is new to him, even the simplest things so you're the only one whom he trusts.
Choices still are not as good as in some other games, you can't kill everyone or save everyone but i'd say the choices are decent. You can have quite different results depending on your choices. Well it was easier to do when developers knew it will be the last game. It would be extremely difficult to have different outcomes in previous games because you'd basically need to write a completely different story for each outcome in the next game.
Clem is a teenager and teenagers fall in love right? I'm so glad to see romance options in this game, it's very well done and should please everyone.
There are new characters, you'll probably like majority of them and hate some. I guess it's up to your personal worldview which is a nice thing because everyone could find someone to connect with.
This season has less episodes but I think they're longer so no loss here. Developers also decided to add some missable achievements so you'll you need to replay some episodes even if you follow a guide.
Graphically it looks ok. The engine is really not up to today's standards, but I guess developers squeezed everything out of it. The game still looks quite good overall, lip syncing is bad. But due to facial expressions you can feel the emotions of the characters.
Areas look good but there's lack of proper anti-liasing.
It doesn't support ultrawide out of the box and I will never understand why these cinematic games don't support it. But there's a fix and ultrawide works great.
Performance is great but one technical issue left me confused. When I launched the game for the first time it didn't launch. I browsed the forums then and learned that the game doesn't work in windows 10 and you need to run it windows 8 compatibility mode. Seriously?
Voice acting is good for the most part. Some characters are better than others but overall it's good and keep immersed in the game.
A really good ending to the series. You can cry, you can laugh, you can feel anger, it has everything. A must have for the fans of narrative games.
Pros
Great story
Great characters
Good pacing
Emotional
Cons
Graphical engine should be burried deep already
There could be even more meaningful choices considering it's the last season
Some technical issues and no UW support
Follow my curator page for more

What's a Telltale game?
This is the paragraph I usually start my Telltale game reviews with, however, it would be more accurate to say "What was a Telltale game?" as the company went bankrupt 2 years ago. I'm glad that Skybound stepped in and finished the last two episodes of this game so that we get to see the closure of Clementine's story.
Telltale games are characterised by immersive storytelling - we select from dialogue options (not picking anything is also an option) and our decisions affect the relationship between our protagonist and the others. During action / fighting sequences we complete QTE events. The inventory is minimalistic or non-existent - puzzle-solving is easy; you do not really get stuck in these adventures and achieving 100% completion is relatively easy.
Clem
This is the story of Clementine and Alvin Junior, the child she has been taking care of for a while. New episode means new community. This time it's a group of kids who took over a boarding school which had been created specifically for the problematic adolescents. Following the prologue Clem meets Marlon and his group and our initial goal is to help and ensure both Clem and A.J. can remain permanent residents at the school. Naturally, things will not go as they seemed at first. There are some nice surprises here and there - references to previous episodes and, in case you still follow the TV show that has seen better days, you'll appreciate the appearance of something that first debuted in season 9 there.
Gameplay
At this point you are already familiar with this IP so there isn't anything new the 4th episode can show us. I did notice that during important conversation choices the upper-left corner indicates that our relationship changed with the other participant(s). These (relatively frequent) hints are easy to remember and are helpful when doing a 2nd walkthrough to see what other potential outcomes are available.
This is somewhat spoiled once we fully complete the game. For instance, a key event is shown with 3 potential outcomes - the highlighted one in the middle explains it was our decision and two more remain. This is a screen we get in a comic book style format. Too bad the statistical data is not available anymore (due to server closure, I gather); I always love to check what percentage of the community picked a similar option and I tend to smile when I see I belong to a minority.
As for QTEs: if you are getting back to WD after finishing Batman remember that here you cannot miss any such event as they result in an instant bite on the walkers' part which we know can only mean certain death. As a novelty not all achievements are obtained with story completion. Some are dialogue-specific and this time there are even collectibles! I had no issues with getting the missing ones by jumping into Clem's journey once more after 10 or so hours.
Goodbye!
Honestly, I had mixed feelings initially. A.J. requires some getting used to and, as usual, some decisions are not as key in determining an outcome as Telltale / Skybound likes to show us. Regardless, the Clem / AJ duo is a great paralel to the Lee / Clem one in the first season. I appreciated the environment mainly populated by children who rely on each other to confront the undead as well as the adult menace ready to jump from around the corner. For me the first or second episode remains the strongest, still, it's amazing to see what Skybound did following the bankcruptcy of Telltale. Scenes may or may not have been changed - this is still a satisfying end to Clementine's story. Highly recommend to WD as well as Telltale fans!