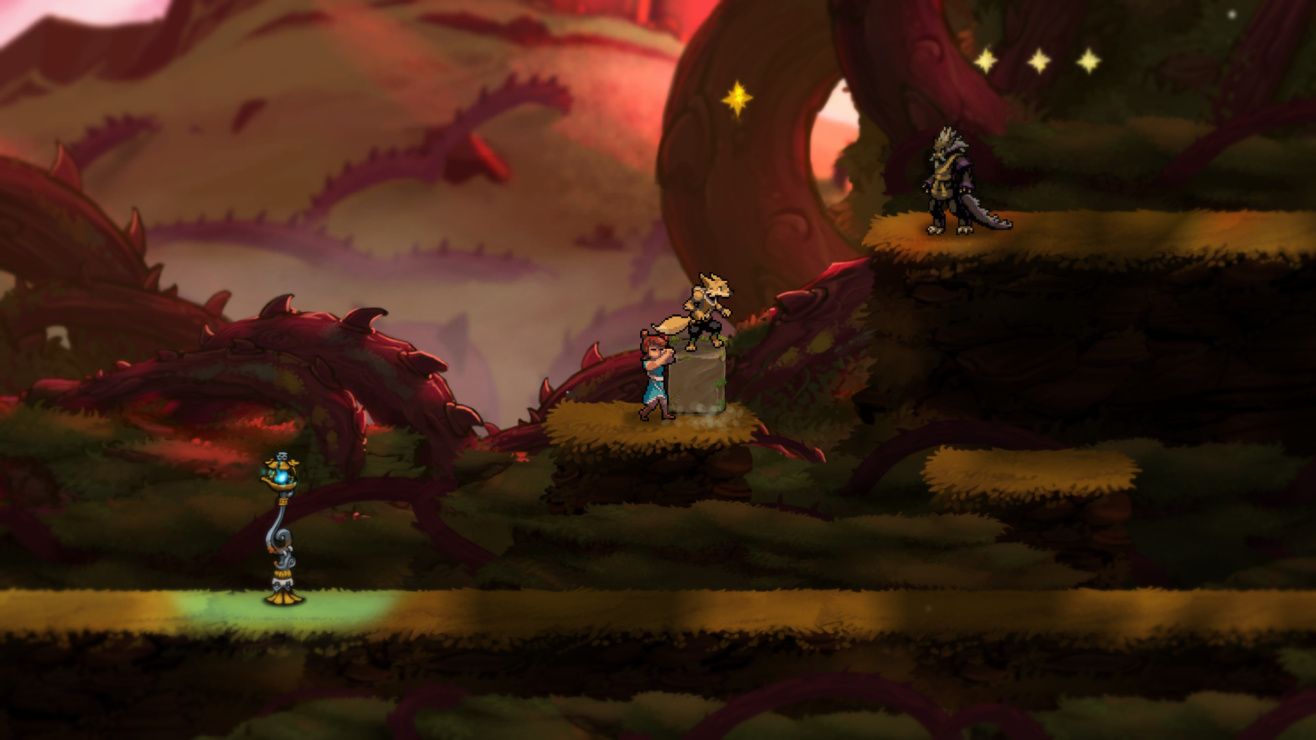 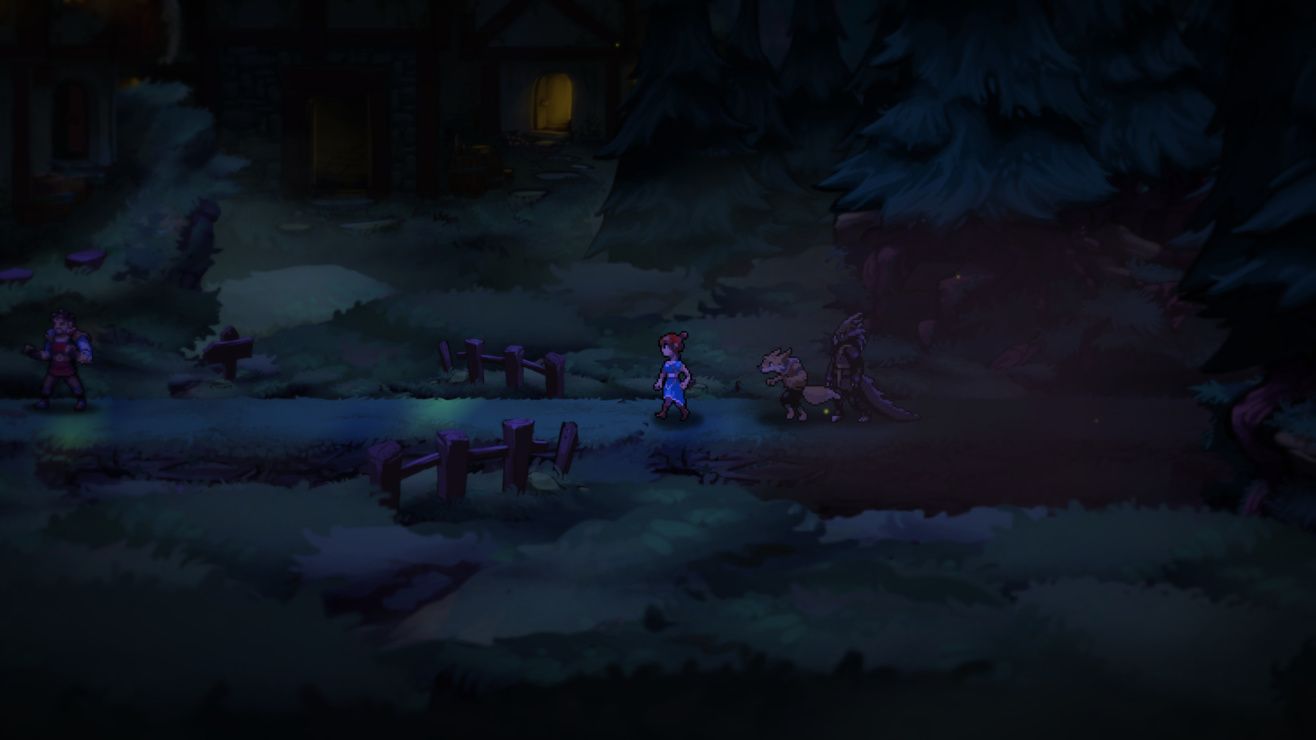 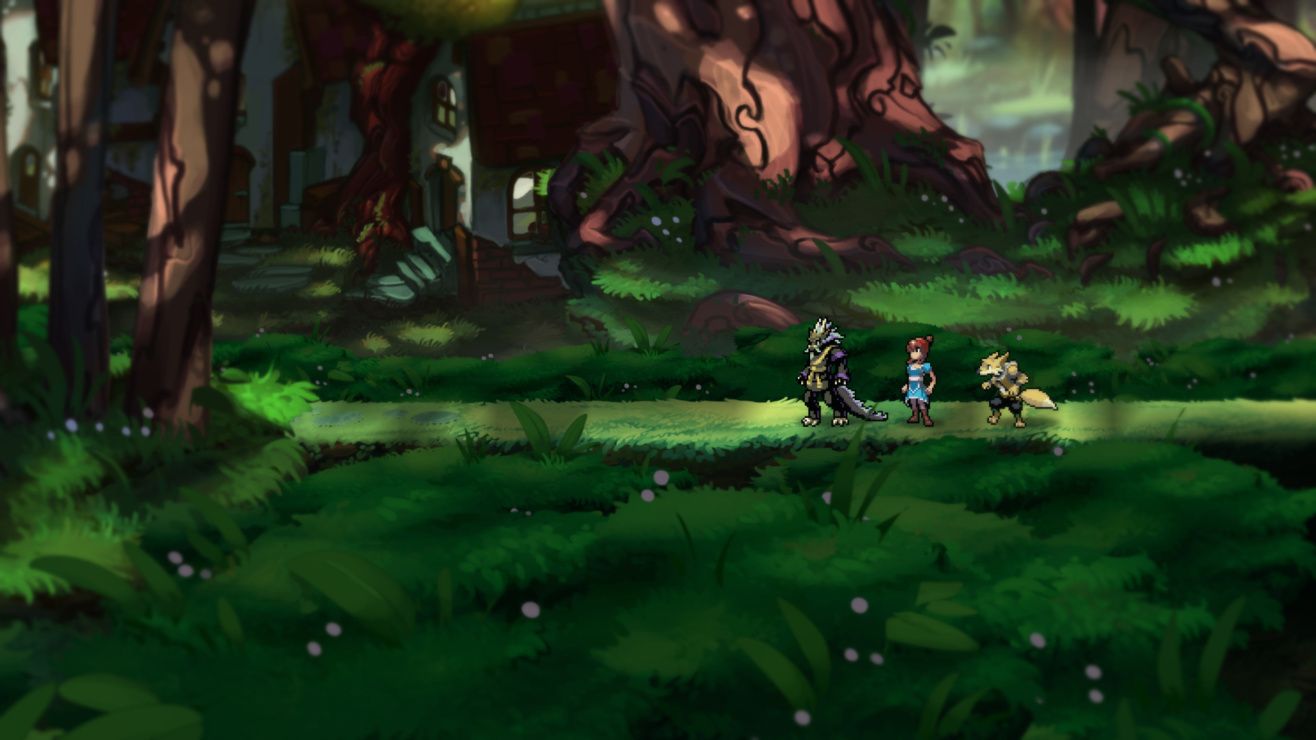 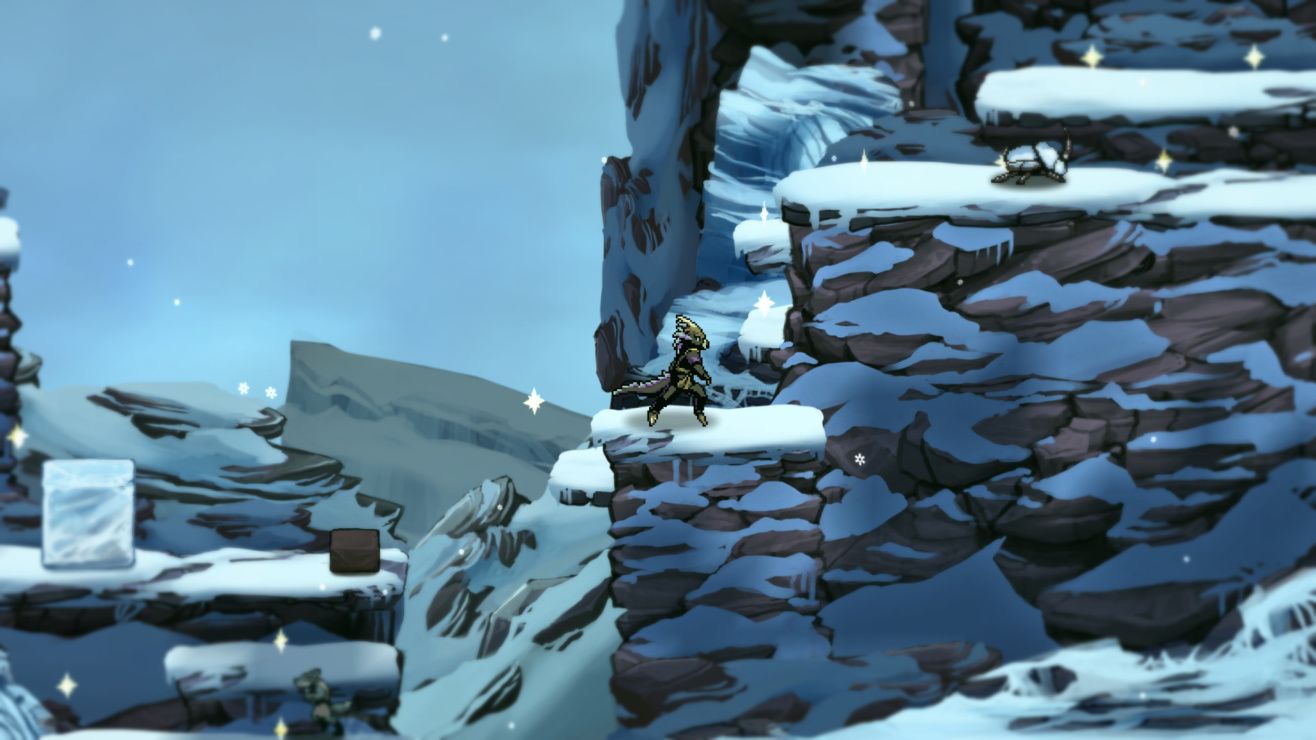 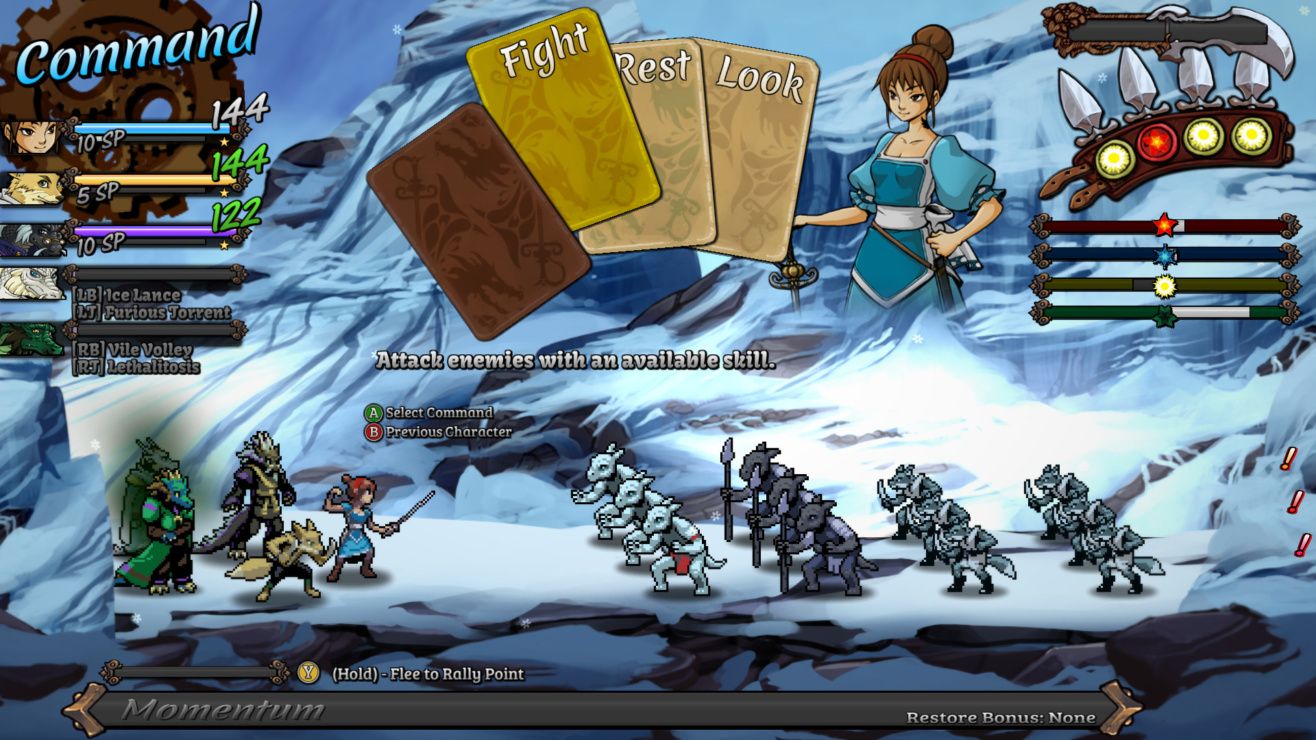 2d action adventure colorful fantasy indie platformer rpg
The Tenth Line is a unique indie role-playing/platforming adventure. Guide the princess of the tiny nation of Easania, along with her unusual but reliable companions, and explore a vibrant world of humans, beasts, and dragons, while escaping the clutches of a mysterious cult in hot pursuit. Explore the world through fast-paced 2D platforming by controlling three separate characters, each with unique movement mechanics and ways of interacting with the world. Take on dozens of foes at one time through turn-based RPG battles with an active timing element. High quality background and sprite artwork, and a grand, varied soundtrack. Unique progression and ways to level-up: power up combat moves and set up character-specific specialties through training, and gain levels to spend on the puzzle-like Power Flow board to increase stats and learn new attacks.
Share Share Share
Promote for 50G

Game is something unique and good. Definitely you can enjoy the game but fight is like rpgmaker game, there is over and over fight spoils platformer element. I really disappoint in fights and get bored in same type of fight again and again. Otherwise game is good and enjoyable.

So overall, I give this game a thumbs up. It tried a lot of things, some of which were done really well, and some that didn't quite live up to their potential. It's definitely worth the price tag, but I'll make sure to go over the potential red flags for some people.
I did finish the entire game on the highest difficulty, including the post game. I just haven't tried new game+ yet, though I don't imagine too much new stuff happens there.
The Combat:
The real time execution of queued moves is a neat addition to normally stale turn-based combat. But I feel like they never quite improved on it throughout the game. It starts of interesting, some moves are knockups or guard-breaks that can set up maximum damage for other moves. Using them in the correct succession will heavily increase your overall damage outpot, which becomes mandatory at later stages of the game. But... that's it.
Figuring out how to do this properly is really engaging for the first half of the game, but no new mechanics ever get added to the combat. Once you have it figured out, you fall into a routine. You know what moves are efficient and what other moves they pair with, and you just use these same combos with the same timing over and over again. Something to change it up later on would have been welcome.
The Platforming:
Perhaps the biggest issue for me with the entire game. The platforming segments are... decent at best, and infuriating at worst. You have to move three individual characters through each substage, which vary in their jump height and movement speed. They also have different abilites for some minor puzzles here and there, but those are mostly straightforward.
The issue is that you basically have to beat every stage three times, because you can't progress if not all characters are at the exit. And if you ever fall off the stage, you are sent back to the very begining, and stages can be quite long. On top of that, movements feels pretty floaty and awkward.
The Story:
It was okay. It wasn't super engaging, but it did the job. They apparently tried to counter how predictable it was by throwing some random plot twists in near the end, which they never really did anything with. Much of it feels rather nonsensical, and the end wasn't exactly a satisfying conclusion either. Still, it's certainly not the worst plot line out there.
The Characters:
One of the strong points of the game. I felt that the dialogue was written excelently, and every character had something unique and likeable about them. I liked the entirety of the cast (at least the player characters), which is quite uncommon for me in these types of games. It was the first time I actually went out of my way to talk to every npc in every town with every character, just to see what they would see. If only they would have been wrapped up in a more cleverly constructed tale, the whole setting could have been brilliant.
The Music:
On point. The OST of this game is something I really appreciated, since I see soundtrack in games as one of the most important parts. The battle and map themes were all catchy, atmospheric and pleasant to listen too. Nothing bad I can say here.
The Voice Acting:
The majority of the game is not voice acted, but in combat, characters sometimes have quotes for specific actions. It was a neat adition. Some people say they find the acting awful, but I personally didn't see any issues with it. I actually thought it was quite good.
The Difficulty:
Even on the highest setting, the game certainly isn't grueling or anything. It is as difficult as you make it for yourself, depending on how willing you are to learn the game systems and use them to your advantage. Starting with the last three bosses, the game picks up the pace quite a bit. That was the first loss I had in the entirety of the playthrough, but I just adjusted my build according to that bosses weaknesses once and beat it on the next try. Everything else I managed to beat first try, safe for the post game.
The post game was the only point where I actually had to use all the tools at my disposal to win. Some stuff like power guards I had completely forgotten about in the main game, but the three bonus bosses offer a nice challenge, with a few new mechanics unique to them .Especially the last one required a bit of strategy. Overall, I think you will only struggle if you refuse to learn how to make your characters stronger in the first place.
Final Thoughts:
I believe this is the first major release from this relatively small studio, and though the effort that went into it is obvious, its flaws are as well. They aren't bad enough to make this game unenjoyable, but they keep it from being what would otherwise be an amazing entry. I'm curious to see if there will ever be another release. Still, I got about 20 hours worth of content for 10 bucks, which is well worth it in my opinion.