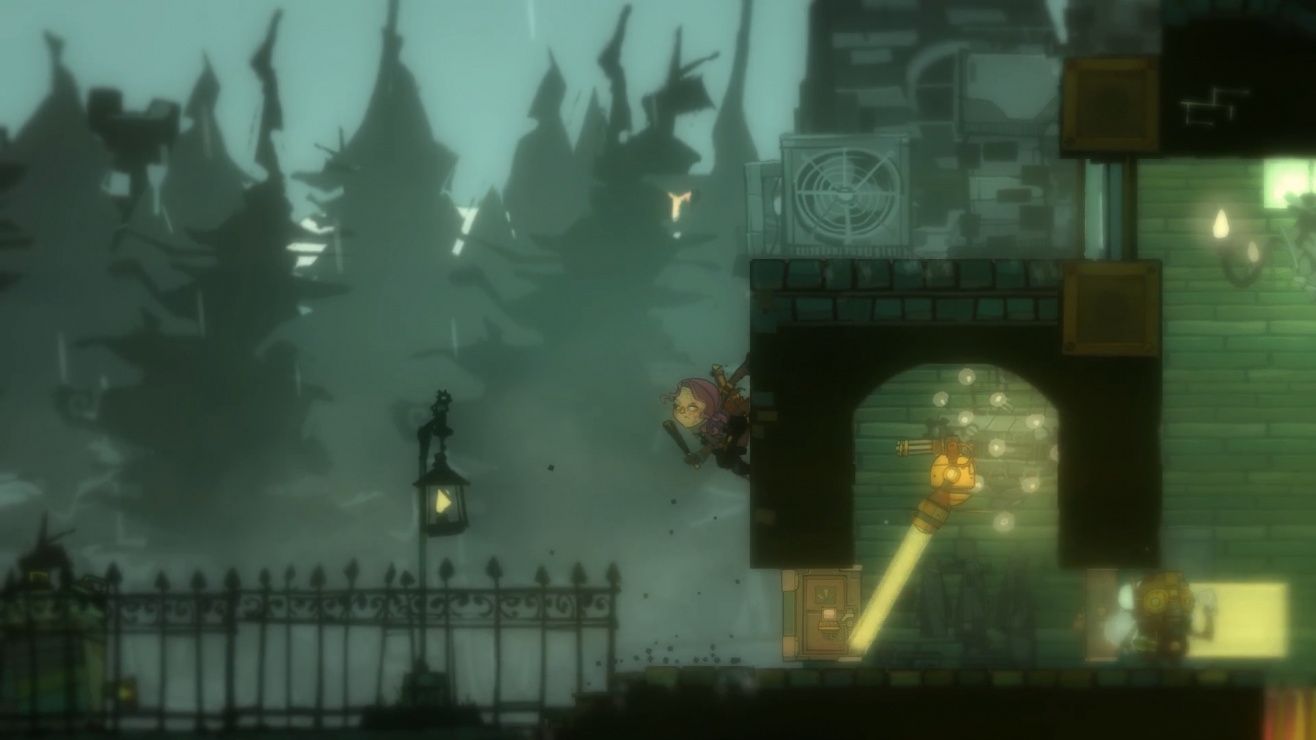 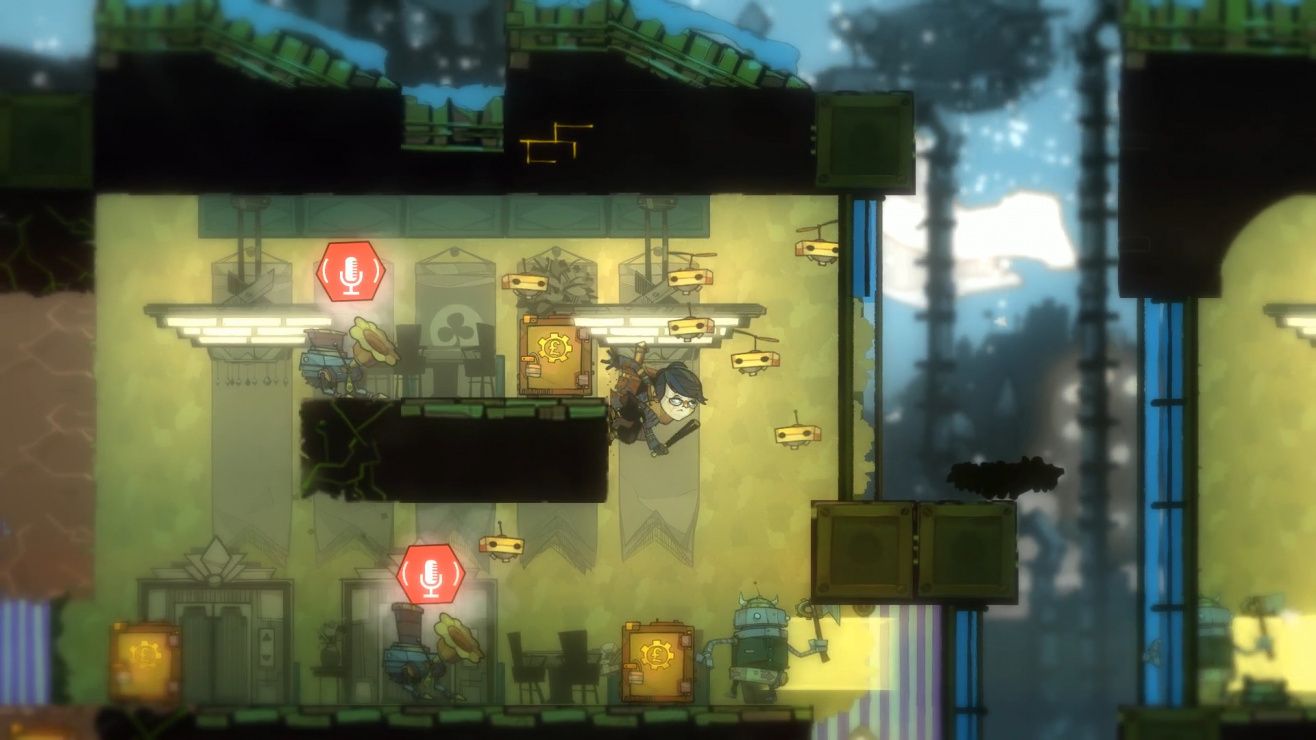 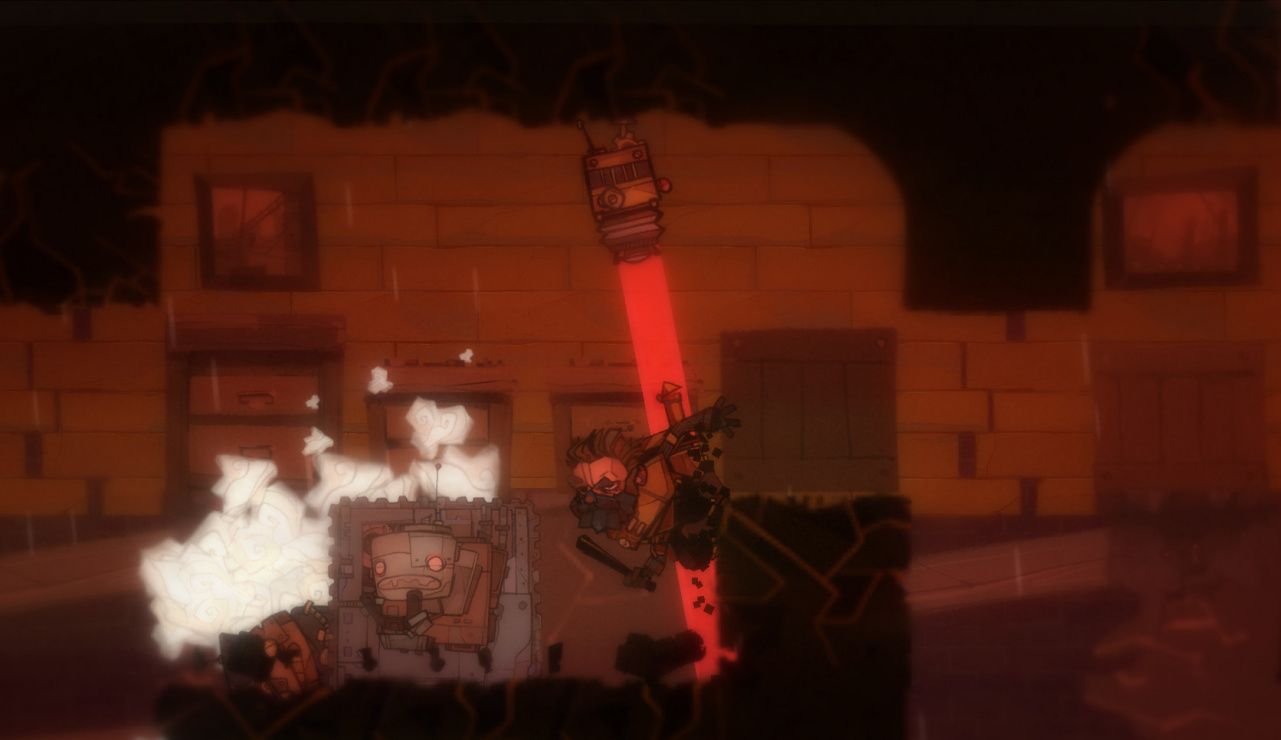 PC Steam Console Playstation action Xbox indie Nintendo rpg platformer 2d stealth cyberpunk crime steampunk
The Swindle is a steampunk cybercrime caper about breaking into buildings, hacking their systems, stealing all their cash, and quickly running away again before the police show up. All the buildings you’ll be robbing are randomly-generated, so you’ll never get the same level twice. Meanwhile, from the safety of your rickety airship up in Outer Space, you can modify your thief with new skills, tools, and all manner of advanced technological horrors, allowing you to take on bigger buildings with better security, for gargantuan rewards! Have you got what it takes to pull off The Swindle?
Share Share Share
Promote for 50G

I don't think I've ever played a game that makes me swear so much with frustration, usually at mistakes I made (stepping on a landmine AGAIN), yet instantly had me reload and go back for more. Yes, the controls are kinda janky (I played on keyboard), and I got stuck in the environment twice, but with those two things aside this is absolutely one of the most rewarding gaming experiences I've ever had.
It's frustrating at times because when you step on some spikes, or an armoured robot, or blow yourself up with a generator, or walk through a poison cloud, you know it's your fault and you curse yourself for being a silly bag of flesh. You know you can do better than that, so that's what exactly what you do; go back and try once more. I've not wanted to play anything else at all since picking this up.
If procedurally generated levels mixed with some strategic stealth in a steampunk world floats your airship, then it'd be a crime to skip The Swindle.

THE PERFECT HEIST GAME, ALMOST.
The Swindle is a fantastic game that PERFECTLY delivers on the fantasy of a heist game. You are a thief who must earn enough cash to be able to afford a ticket to the last heist you will even need to pull within 100 days. Each day sees you plunder randomly generated buildings of increasing danger and wealth as you buy upgrades, security clearances, and gadgets to prepare for the final heist. This game is tough too! You will need to carefully plan how to take on each room, decide whether or not to take a precarious but tempting risk for some extra cash, and book it out of there if you trip the alarm lest you die and experience a major setback.
HOWEVER, the thing that really holds this game back is the controls. It is definitely buggy, you wont go 30 minutes without accidentally clipping into a floor or having the game's weird slopes eat your jumps, but that would be manageable if only the controls were more fluid. I just found myself never %100 in control of my character, especially when wall climbing and jumping. Its really a pity, because this game's difficulty REQUIRES precision, whereas the bugs and controls destroy precision.
This is still a wonderful game that you should try. No other game has made my feel as risky and greedy as this one. I hope that at some point some of these issues get patched, but until then this game wont be more than a passing interest.

This is honestly an amazing game with enough style and design choices to give you an experience you can't quite get anywhere else, however it has a few very big caveats. Starting with the good, the scope is perfect, I didn't feel like it dragged on or that I needed more out of it, and the pacing is very good. Finale acts as a good test of pretty much everything you've learned through your various successes and deaths. I'm more a fan of roguelikes than roguelites, but this game strikes such a cool balance between the two; I wasn't sure how much of a gimmick the 100 day mechanic would be but it honestly does an amazing job at getting the best of both worlds. The upgrades are all significant enough for you to care about. I normally dislike tweened animation but this game's style fits it very nicely, visually the game is quite charming. The soundtrack is also really good, I wouldn't listen to it outside the game but it gets me way more invested while playing, especially the theme when you're caught. Honestly, there's not too many exceptionally notable things I could say, but most aspects of the game in general are very solid, it's quite a fun, charming, and worthwhile experience. As a very loose comparison to give a sense of how the game is, imagine a cross between Mark of the Ninja's stealth, and Spelunky's game feel and world gen type.
Onto the caveats of this game however, I honestly don't have much to complain about design-wise, but there's a few bugs that can completely ruin the experience. Luckily, I've found ways to counteract most, but it's still an unnecessary pain that I wish just weren't there. Design-wise, all I can say is I wish the drones weren't so random. The RNG mixes up the gameplay of course, it shouldn't be removed, but sometimes you're waiting for an absurd amount of time for one to just stop looking in the worst angle. Other than that my only big complaint about design is that the game doesn't tell you that gas is just death on a timer. There's no recovering, only escaping, and while I understand this design choice I was confused for quite a while until I found out you just need to avoid it.
There are 3 bugs that, while you can play around them most times, are really aggravating sometimes, add nothing to the game, and ruin the whole "Every death is your fault, and you can learn from it" aspect. Firstly, walljumping seemingly randomly caps your momentum in the air. In the most extreme cases, in a 1 block wide hole, you can't jump from one side to the other while holding left/right. 24 hours in the game and I still have 0 clue what prompts this, but luckily you can play around it as pressing the opposite direction will stop this issue, then you can hold in whichever direction you want as normal. The second issue is sometimes the game won't jump when you press the button, this one might only be on slopes but I feel like once or twice I've seen it happen on flat ground. Slopes are pretty easy to avoid interacting with in this game for the most part, try not to put yourself in a situation where failing to jump off one will result in death. The last issue is that if you buffer using the teleporter right after hacking something, you'll get stuck in the air, unable to move. Depending on where you are this will either softlock you until you terminate the employee, or if there's ground above you that you could land on, you can keep teleporting left and right to gain a slight bit of height each time, and use that to land on it. If you manage to, you'll get unstuck and save your run. This one gave me the most frustration despite being the easiest to avoid in theory, as in practice I ended up doing it a lot.
TLDR/in conclusion: I've said a lot more negative about this game, but don't get me wrong: I still would highly recommend this game and think it definitely deserves more recognition than it has. Take this review more as a warning of how to deal with those 3 major bugs. They show up a lot less than I've let on, and in most situations (outside the third) they rarely cause a death, especially if you know of them. Despite how this review has come off, I highly recommend this game, just keep an eye out for these issues and do your best to play around them.

I'm a strong proponent of procedural generation in stealth games, and for that reason alone, The Swindle gets my vote. You get good at the game by getting good at the mechanics, not by memorizing the content or abusing quicksaves.
While many of the complaints in other reviews are valid - the controls get a little janky, the environment doesn't always read very well, and I did suffer my share of unreasonable deaths - none of those issues were big enough deal breakers to make me want to stop playing.
All in all, it was a compelling little experience that never once failed to hold my attention. I almost feel guilty about getting it for pennies during the summer sale, but on the other hand I'm pretty sure I bought Gibbage twice back in the day, so I think I'm gonna call this one even.

The only reason I reviewed this game is because I was shocked that the rating was mixed. It's a hard game, but it's fair, and it's still a fun rogue platformer game. Maybe it needs to change into a rogue-lite for more mass appeal? The controls work just fine and they don't feel "wonky". Maybe it's just time for some people to admit that they just suck at this game and it's not the game's fault.

Negative: wonky controls, can be frustrating.
Positive: when it works and you get a successful 100% ghost heist, there's nothing more rewarding. The game is very challenging, with short enough stages to play while you have a few spare minutes ('til you reach the higher levels).
Would recommend to those enjoying riddle games and platformers.

Reminded me of how I play Skyrim:
Enter a random person's house and start taking all the valuables I see.
Either I leave when I've cleared the place out, or someone spots me and I GTFO!