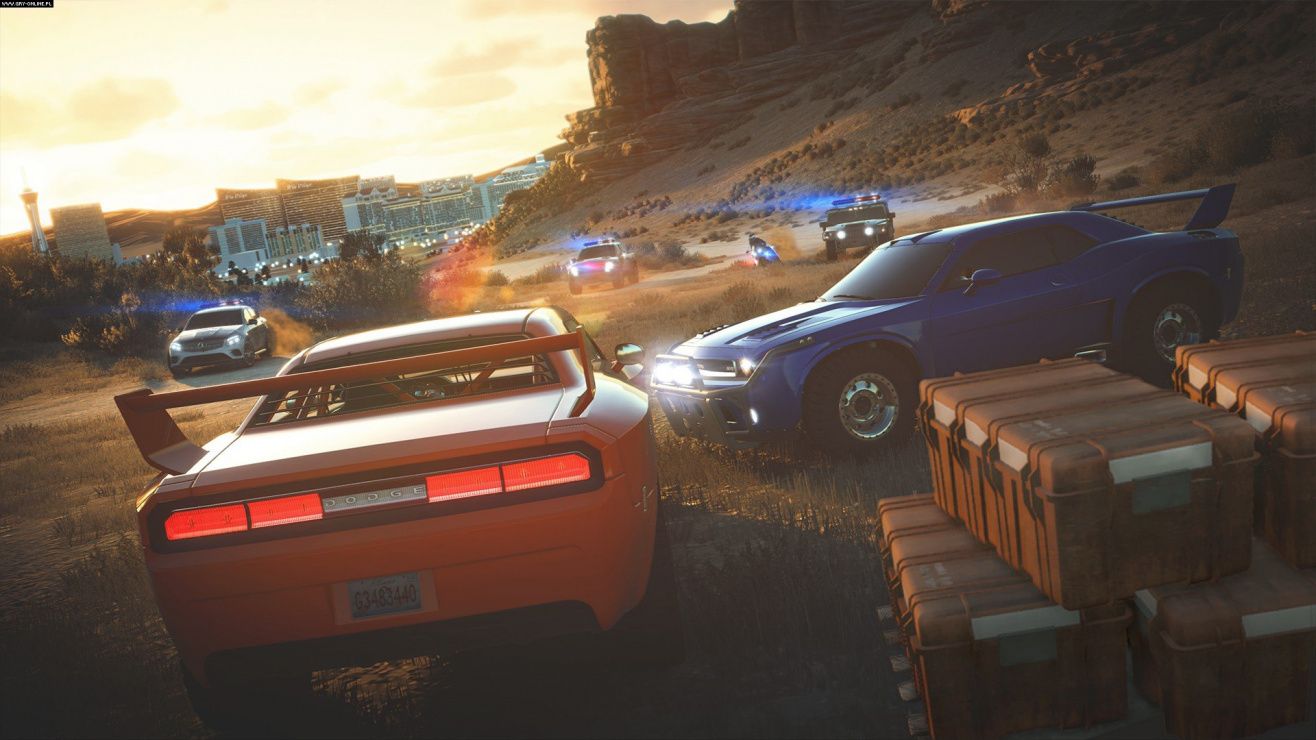 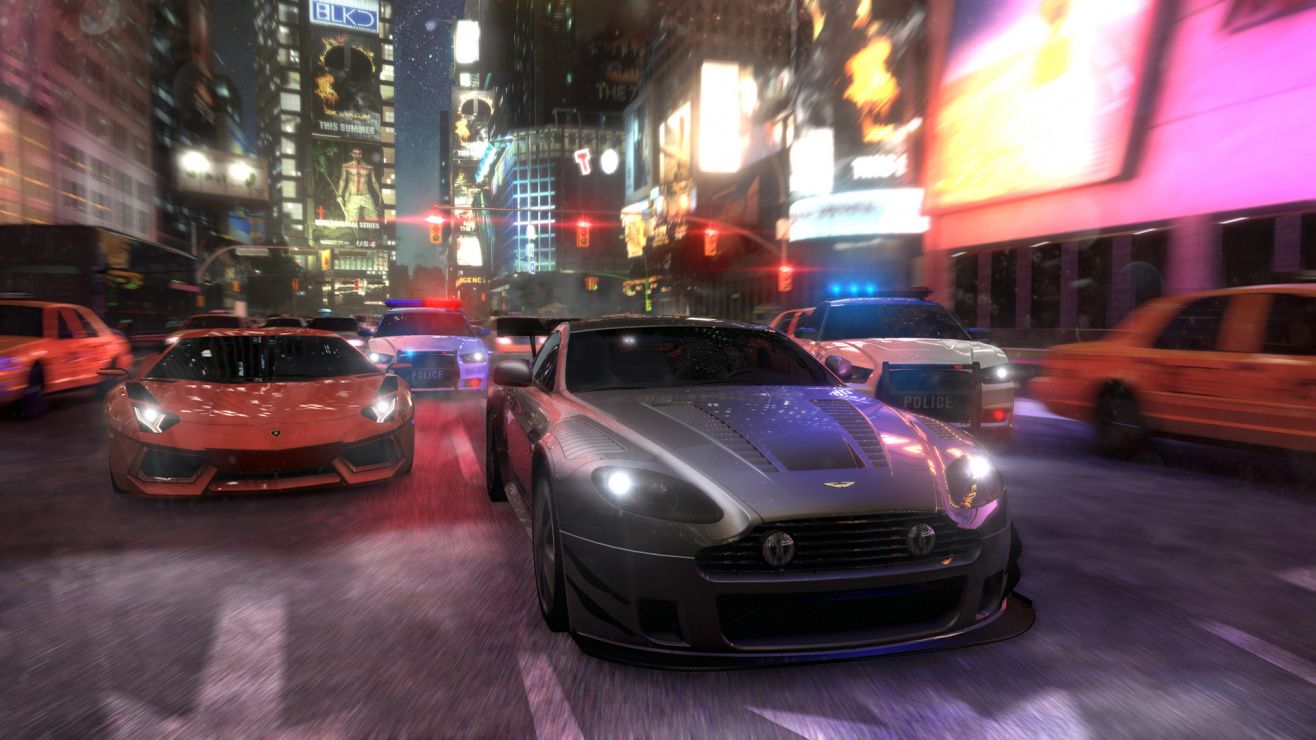 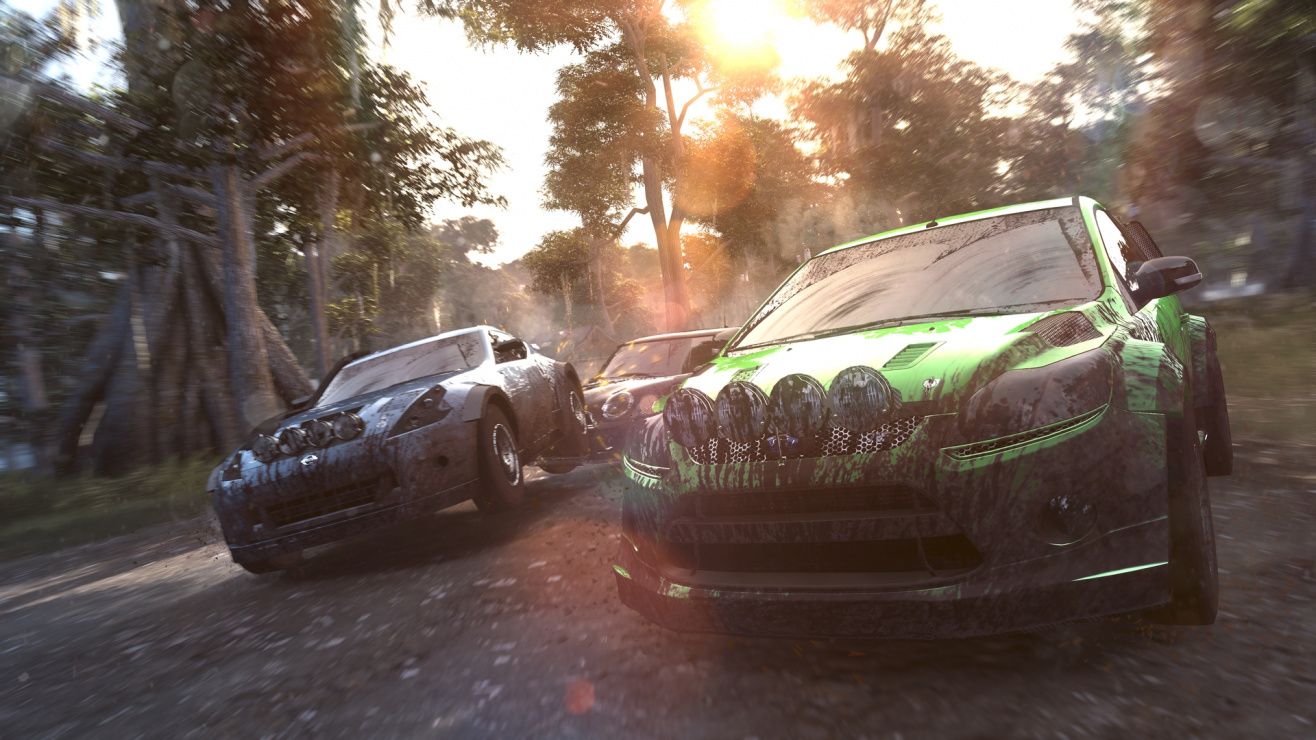 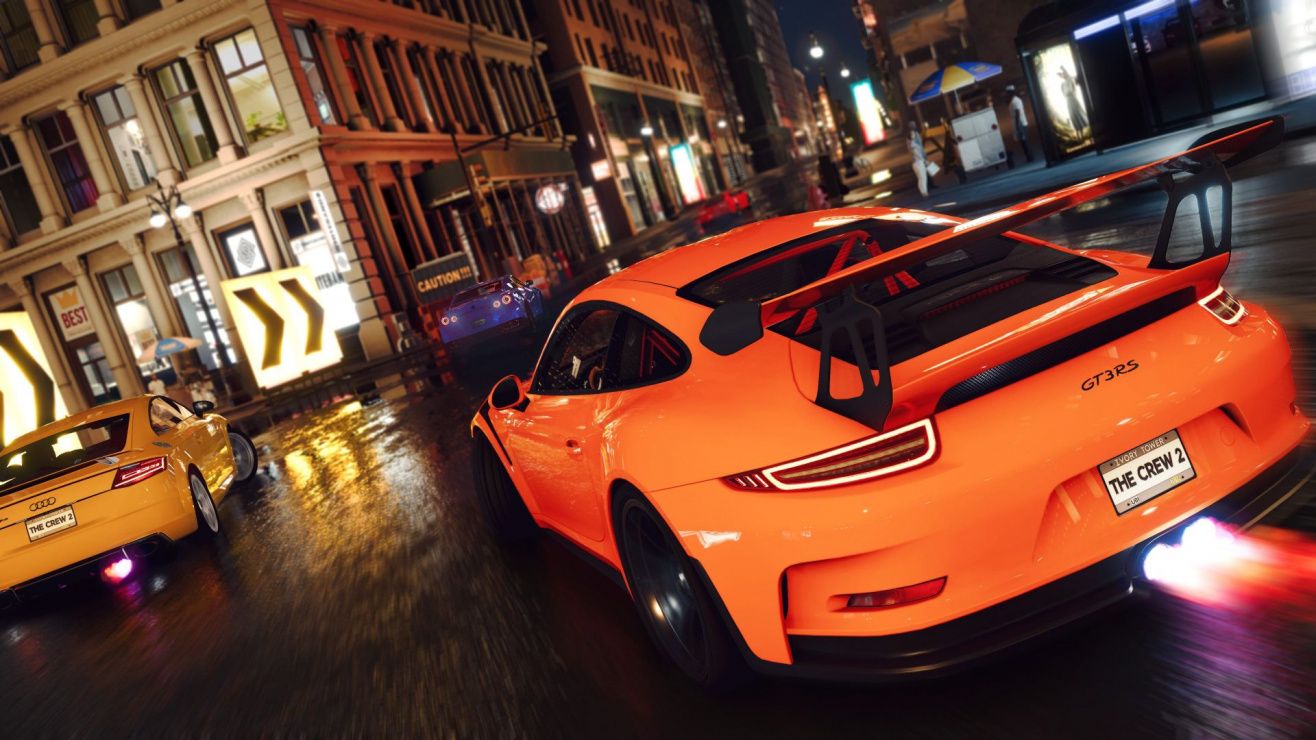 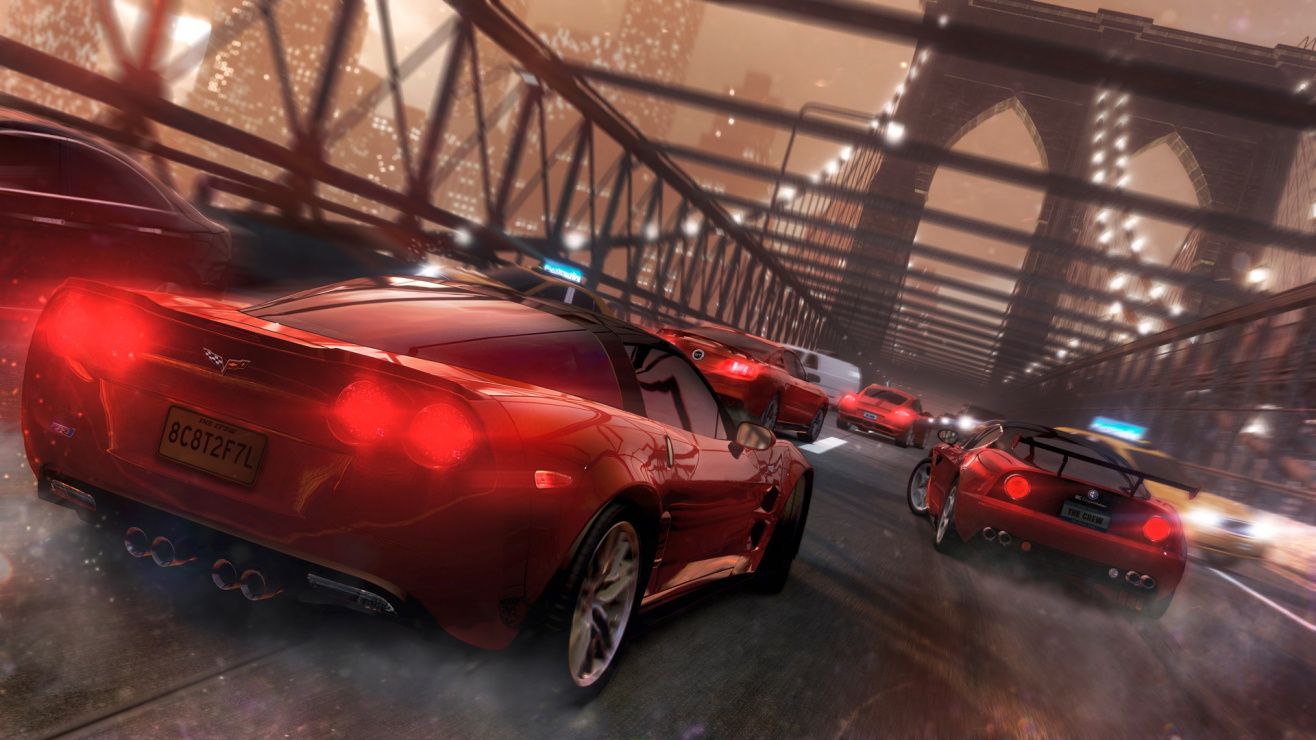 PC Steam Console Playstation Xbox multiplayer co-op casual open world arcade Windows cars race
The Crew is a racing game set in a persistent open world environment for free-roaming across a scaled-down recreation of the contiguous United States. The map is split into five regions: The Midwest, East Coast, The South, Mountain States, and West Coast. Each region has its own unique geographical features. Six main cities (one in each region, two in the Midwest) are featured in the game: Detroit and Chicago in the Midwest, New York City on the East Coast, Miami in The South, Las Vegas in the Mountain States, and Los Angeles on the West Coast. Various other cities, namely St. Louis, Washington, D.C., New Orleans, Dallas, Salt Lake City, Santa Fe, San Francisco, and Seattle, are also featured in the game. Over thirty smaller cities and towns line the countryside, such as Nashville, Norfolk and others. It takes approximately 45 minutes in real time to drive from coast to coast in-game.
Share Share Share
Promote for 50G

great game, better then the second one, trust me

TL;DR - a decently made arcade game meant for those who simply love driving, open-world free roaming and don't care about unrealistic game physics. It's not a realistic racing simulator, nor is it crazy NFS-like mayhem. I'd say it's somewhere in the golden middle.
In the beginning of 2020 I was pondering the idea of joining my friends on a road trip across the US. It's a dream of many car enthusiasts and I was not an exception. However, as I was becoming more and more excited about this opportunity, the virus came along and foiled all those plans. Can't travel, can't go anywhere, started gaming more. While surfing Steam for games I laid my eyes on The Crew and immediately thought, 'you know, if I can't go to the US, this might just be the next best thing'. And so I bought it, and so it was.
Being a sucker for open-world driving I instantly fell in love with the game world - a scaled down replica of the United States, a fascinating and diverse place with so much to see and discover. If exploration is your thing, there are 242 landmarks all across the huge map with a short description for each one, as well as collectible car parts which when fully collected let you build exclusive vehicles. The Crew simply lets you lose yourself in it and gives you an awesome time. The game also includes a photo mode which lets one take breathtaking pictures of their dream car and with the map so big there's millions of lovely spots to snap your hot ride.
If you're playing with a wheel you're in luck - wheel support is built-in and it's superb, with various settings that can be changed. A lovely surprise (although it makes sense) is the support of manual gear shifters which amounts to an amazing driving experience. It's not the most realistic driving because all cars seem to handle very similarly to one another, and collision physics are... subpar, but if that's an issue I'd recommend a proper racing sim like Assetto Corsa or the like. Other than that driving with the wheel is pleasant. The only nonsense is the automatic braking - if you're doing less than 15 mph your call will keep braking to a halt, even if you keep your foot on the clutch.
The variety of vehicles is quite big and ranges from good old muscle cars to hot hatchbacks, coupes, exotics and SUVs from all around the world. Depending on where and how you wanna go you can tune them at different tuners to perform well on the street, the off-road, or maybe you just wanna drift around every corner and put the Drift spec package into it - the possibilities are many. Besides, you can visually tune all your cars quite extensively as well, which is nice. Speaking of vehicles though, it's sad that Ubisoft are as greedy as the next company and cut out half of the game into paid DLCs, meaning half the cars will be locked out of the base game. If you'd like to have them all I suggest you buy the "ultimate" edition, cause the price is not that bad if you grab it on sale.
Other than the free roaming there are obviously races and other missions, and they're pretty fun because they take place in very different environments, be it snowy mountains in the North, bayous in the South or some large metropolitan area. They're a part of a pretty boring storyline but hey, there's at least some storyline in The Crew - not all driving games have this feature nowadays. What I also love about the racing is that the rubberbanding is not that bad, I almost never felt its presence while playing (well except for cop chases). It's nowhere close to the terrible "in-your-face" approach that EA always takes. In The Crew if you're winning, you're winning - the opponents won't magically appear right behind you after they spin out and horribly crash.
On the negative side, they thought it was cool to force the players to keep this game connected at all times in order for it to even function. In the month I've had The Crew I've been unable to play three times already due to some server errors on their side. Not only that but they also throw many players into the same world, meaning you're bound to meet some 12-year-old a$$hole who can't think of anything more meaningful than rear-ending you full-speed while you're slowly cruising and chilling. Let me tell you Ubi - ain't nothing cool about that. At least give the players a g0ddamn choice instead of forcing your flawed online-only approach.
To sum up, apart from the always-online crap The Crew is tremendous fun. It's not the most realistic game out there but it has a lot of American charm with plenty to offer in the exploration department. To cross the map from the East coast to the West coast takes about an hour, depending on your driving style, so as you can imagine it's a gigantic, diverse playground. It's good fun.

This game is so good. In my opinion, get this game instead of The Crew 2.

A wonderful ducking game, an answer to all my questions, runs super well and is super great to play.
Sad that I can't start career again, but damn, the team of TDU has finally done something good.
It's just so good.
Just needs a little bit more optimization and its good to go.
If Ubishit shuts this down, I'll personally defecate at their headquarters.
Unless they make an offline mode.

I love this game.The game just brings me so good memories.

This game is charming as heck, and it's lots of fun. The handling model is arcadey, but fun. The physics are bonkers, which kind of adds to the charm anyway. There's plenty to do, plenty to explore, and lots of cars and builds to play with. The servers are still up as of writing this review, which is very nice.

better than the crew 2 just dont play above 60 hz