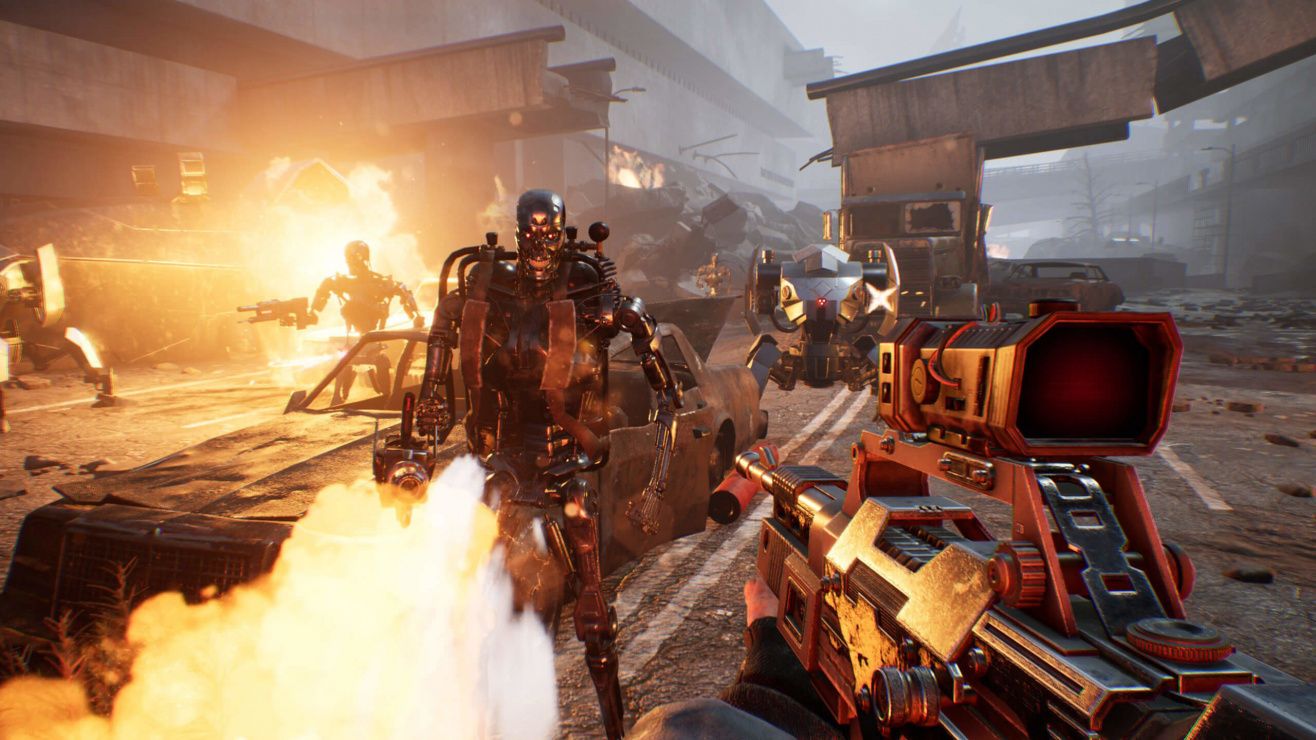 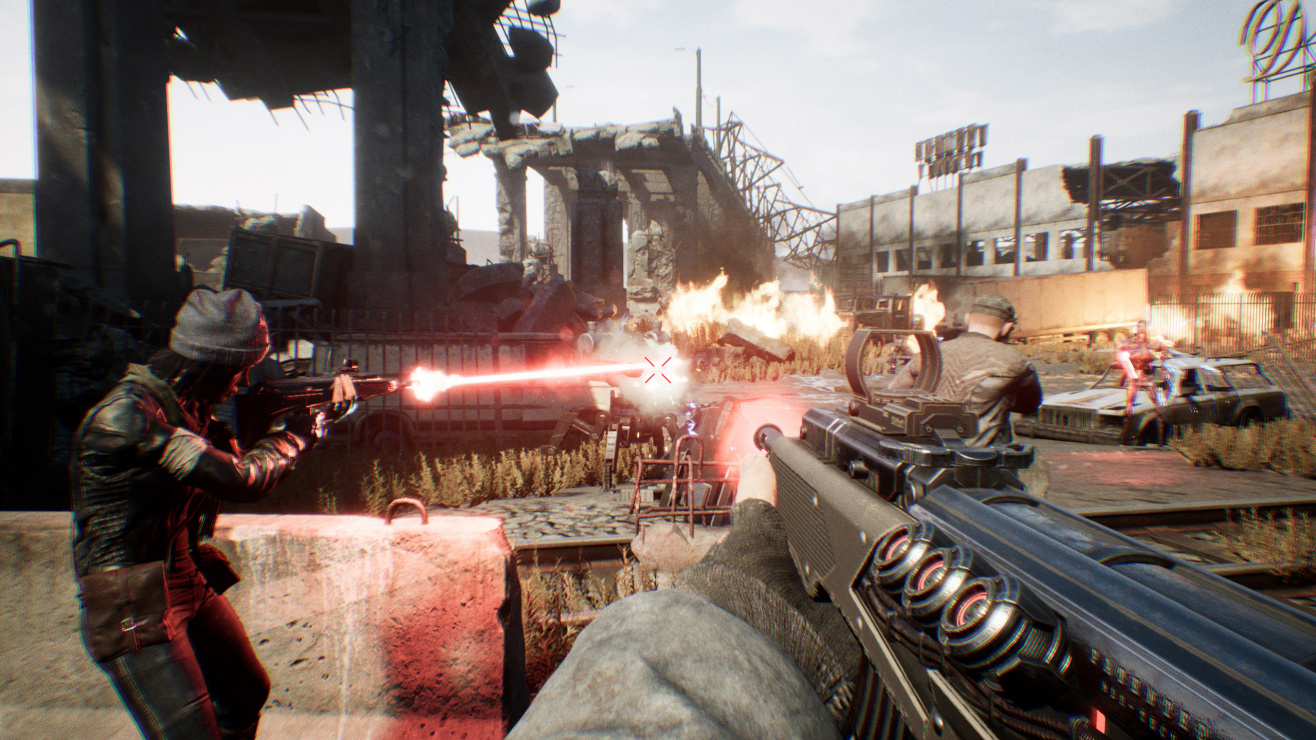 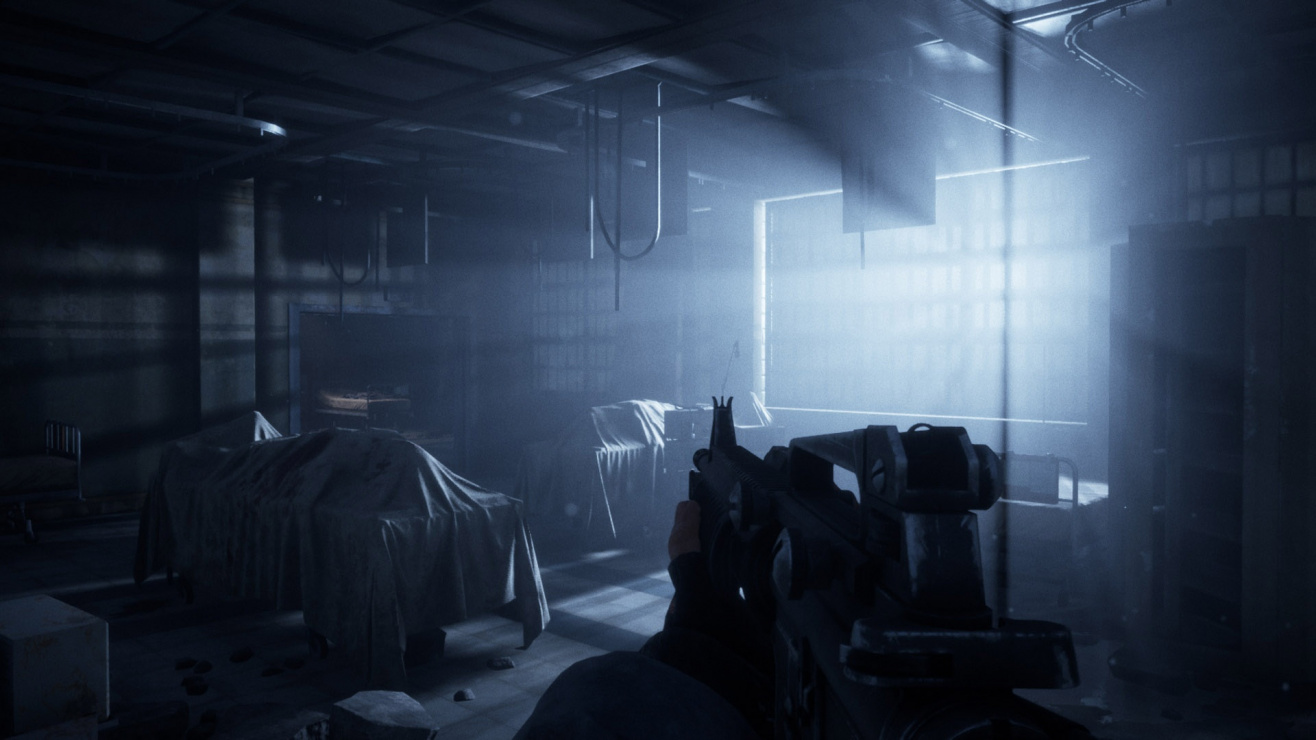 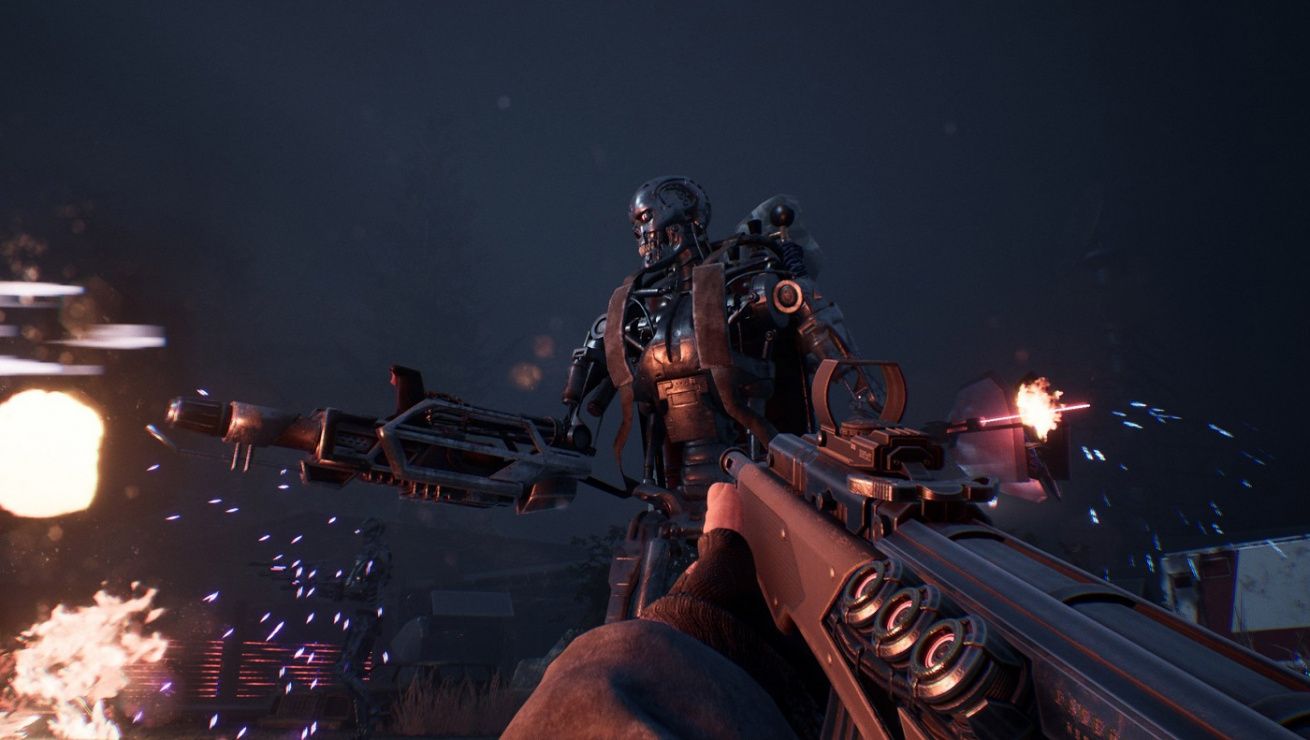 PC Steam Console Playstation Xbox action adventure singleplayer rpg sci-fi shooter violent
There is no fate but what YOU make. Experience the events leading up to the decisive final battle for the fate of mankind in the war against the machines. Terminator: Resistance, is a first-person shooter set during the 'Future War' scenario that was only glimpsed at in the iconic films, 'THE TERMINATOR' and 'T2: JUDGMENT DAY'. The machines are destined to lose, but at what cost? Run and gun or sneak and hack through Skynet’s defences! Level up your skills and explore a post-apocalyptic world for scraps to trade and craft! Interact with a motley group of survivors and change their fates!
Share Share Share
Promote for 50G

Terminator Resistance is essentially what Alien Isolation was to the Alien franchise. A love letter to fans of the series.
The Terminator license hasn't been this good since 1991.

Wow. Just finished this. I'll try and get the most objective breakdown items out of the way first:
PROS:
- Extremely faithful & accurate portrayal of the Terminator universe based on the first two movies (original continuity).
- The atmosphere feels appropriate. Never seems like I'm in anything but the Terminator universe.
- Weapons feel satisfying, despite limited variety.
- Enjoyable storytelling and character development.
- Graphics are decent (Needless to be said, this is based on my personal assessment and I'm sure that some would disagree)
- The finished product was not tainted by any hamfisted messaging or unnecessary addenda
- It is very easy to find yourself suddenly immersed/engrossed in the game and realize that a good chunk of hours have gone by unnoticed.
CONS:
- While the skill tree was functional, it felt limited
- AI could use a bit of work. A lot of times you could get away with a lot of nonsense because the AI would get stuck or it would have certain limitations you could exploit.
- Crafting felt like it was just lacking; just enough was offered to make it useful, but it felt like a missed opportunity
- Game length for the price feels average.
- Overall felt like the game's mechanics were just functional although uncomplicated. Seemed like it draws from elements that are present in other games and does so well enough that you are engaged- but nothing beyond that.
Would I recommend this game:
Absolutely
Who would I recommend it to:
- Anyone that enjoys first person shooters.
- Anyone that enjoys sci-fi with thriller elements and a splash of horror.
- Anyone that enjoys character oriented storytelling and progression in games.
- Anyone that is a fan of the Terminator series and/or universe (This game is a definite 'must have' for your library).
Do not get me wrong... This is -not- a perfect game. I'd imagine that this would easily be a 9/10 if a tiny bit more time was taken to flesh out what the gameplay offers. It is likely that the budget was somewhat limited and with a shortstop deadline which I don't mind forgiving. Instead it feels like a generous 7/10.
However- there were very few games in this universe that were good (both objectively and subjectively) or offered as satisfying an experience as this one did, to say the least.
What the game DID get right, E V E R Y O N E else failed at rather miserably: The universe feel, portrayal and continuity consistency. This was very obviously crafted by people that had love for the intellectual property and the original movies. The chain of film sequels that followed Terminator 2 was somewhat embarrassing with more misses than hits. Everything was done to re-invent or outshine its predecessors unnecessarily or in a manner that doesn't function well and fundamentally failed in one or (usually) multiple ways. While it's not a sin to have directors and writers re-shaping the continuity or overall nature of an IP/Universe... It's damned unfortunate that the storytelling, character development or overall 'flavor' suffers due to excessive creative liberties or backhanded messaging.
I honestly had no quarrel with the points where this game did not shine- or at the very least found it far less important than what it had gotten right.
EDIT: Forgot to mention... As of this writing, the game runs very well on Linux via Proton (5.0-7).
Enjoy.

Simply put, this is the best Terminator game ever made. OG Terminator fans owe it to themselves to play this.
Pros:
Clearly developed by people who love the first two films.
Packed with fan service.
Authentic sounding and looking weapons.
Visuals capture the feeling of a post nuclear holocaust LA.
Soundtrack is fantastic.
You can adopt a stray dog and name it Max (or Wolfie).
Cons:
Gameplay is way too easy.
Visuals can be inconsistent.
If you're not a Terminator fan, you won't appreciate a lot of the content.
It's only 8 hours long.
Full video review:

Terminator: Resistance is..
How best to put this. You run across the ruins of a fast food joint called Big Jeff's, and inside there's a menu and a mention of a waitress called Nancy who smokes a lot.
If that doesn't say anything to you, don't worry, it probably won't. Big Jeff's is the joint in which Sarah Connor works during the first Terminator movie, a bad restaurant with greasy food which she and her friend and coworker chainsmoking Nancy loathe. I don't think the movie even tells you that much, you'd need to dig out the (surprisingly decent) novel The Terminator (by Randall Frakes).
Why is such an insignificant detail relevant? It's the game in a nutshell. Terminator: Resistance is a quite decent fps/rpg hybrid, and probably the best Terminator game ever made.
It really gets everything right.
It's those ~10 mins of Future War flashbacks from T1 and T2 writ large and convincingly.
It's hiding among ruins from flying H/Ks.
It's pelting Terminators with solid shot so you can run away, because you're not (yet) packing a Phased Plasma Rifle, 40 watts.
Dammit, it actually makes the Terminators scary which, frankly, I didn't even think was possible after all the meanderings of the franchise.
If you're a Terminator fan, absolutely get this. If you're not, you just might become one :)

Is it good? - YES
Is it perfect? - NO
Does it give you a Terminator feeling? - YES
100% possible in one go? - YES
Is it easy to pick up? - YES
Can you eat it? - NO
Is it very enjoyable? - Hell YES
‘I need your clothes, your boots, and your motorcycle’
Terminator 2: Judgment Day`
Follow our AWG Curator

I'll get straight to the point: The last time I saw anything good Terminator related was SkyNET. After that it was nothing but endless trash for over two decades. Resistance may have some serious issues, but it's the best thing to happen to this franchise since 1996.
STORY
Take everything that happened after T2 and throw it in the trash where it belongs along with that mutated abortion of a reboot Cameron sh*t out recently. This game is a prequel to the original movies and takes place exclusively in the future we saw only glimpses of back then.
You play as Jacob Rivers, a member of the resistance, who, for some reason, got himself on Skynet's top 5 hit list. In the beginning of the game you're about to be terminated, but someone saves you just in the nick of time. You then meet and group up with some survivors and eventually reach the resistance where you take part in the war against Skynet.
The story is decent enough and syncs up well with the films (far better than any of those so-called sequels did). There are several endings which depend on what you do throughout the game, but it's nothing overly complicated.
muh grafix
From a technical standpoint this game isn't gonna blow anyone's mind. The graphical fidelity isn't exactly stellar but it's good enough. Based Unreal Engine guarantees some glorious popping as well, but it only happened a couple of times on my end. I ran across a couple of visual glitches as well like an armored spider phasing out of existence whenever I moved a bit further from it, but those were rare.
Where the game really shines is in the atmosphere and lighting. You can tell the devs adored the original movies, because they perfectly nailed the look and feel of the post-Judgment Day future. There are a couple of daytime missions which I didn't really care for but once nighttime hit I was sent back to my childhood self dreaming of the day we would get a Terminator sequel set in the future (I miss my childhood optimism).
MUSIC
An absolute hit with no misses whatsoever. The entire soundtrack sounds straight out of T1 and T2, with plenty of remixes and original tracks. No track feels out of place. Here's to hoping there's an official release down the line.
GAMEPLAY
This is the part I have mixed feelings about. To make a long story short Resistance is essentially Metro with Terminators mixed with a simple crafting system, upgradable weapons, a leveling system with unlockable skills and a semi-open world.
For the most part what it sets out to do it does pretty well (considering this is coming from the people who made Rambo: The Video Game), but it has some pretty big problems which I'm hoping the devs can patch in the future, because if they do this game can easily go from decent to glorious.
The first major issue is the enemy AI. As it is now it's more or less on the level of Quake 1 enemies with the pathfinding of a decapitated chicken. You can easily cheese almost all enemies because they barely bother to chase you for more than 50m. There's a mod on the nexus that makes them a bit more aware, but even with that installed there's a lot to be desired here.
The second major issue is that this game is TOO F*CKING EASY! Like, I can't even begin to describe how easy it is. I played on the Extreme difficulty and while it was a bit challenging in the very beginning (kudos to the devs for making the T-800s shrug off bullets like flies and making it so they can liquify you in seconds) the moment I got my first plasma weapon the terminators stopped being a threat, the moment I started upgrading endurance I became the terminator. If you're creative enough with your weapon upgrades you can end up one-shotting everything bar the huge chunks of metal. The game also gives you way too many resources if you're willing to explore to the point where halfway through the game I had more ammo, medkits and explosives than there are planets in the universe. The few times I did die was due to my own stupidity (because who knew throwing pipe bombs at your feet was a terrible idea) and not due to the machines actually posing any real challenge.
Despite all of this I did have fun especially during the early game where having a T-800 spot you was a death sentence. The difficulty issue can easily be fixed with some proper tweaking (like limiting how many medkits you can carry, making ammo and resources more scarce etc. etc.) and with some proper pathfinding the machines can be made into an actual threat.
TL;DR
If you love T1 and T2 definitely grab this on sale, it's a fun ride despite its flaws. Story is alright and actually connects well to the films unlike anything else in the last 24 years. The graphics are alright for the most part but they nailed the atmosphere. The music is top tier. Gameplay is overall fun, but has some big issues. In it's current state it's absolutely not worth the asking price, but if the devs care enough to fix the problems it has (because they aren't beyond fixing) then by all means get it at full price. It will be completely worth it.