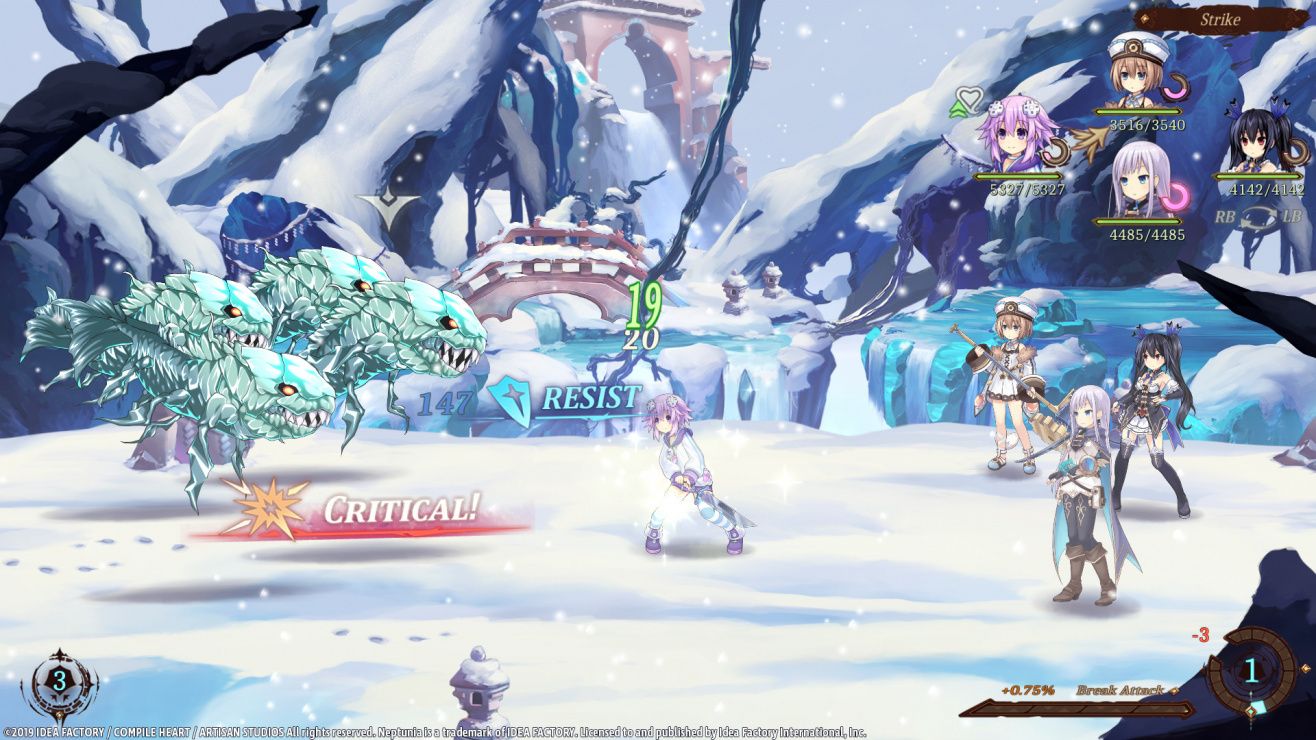 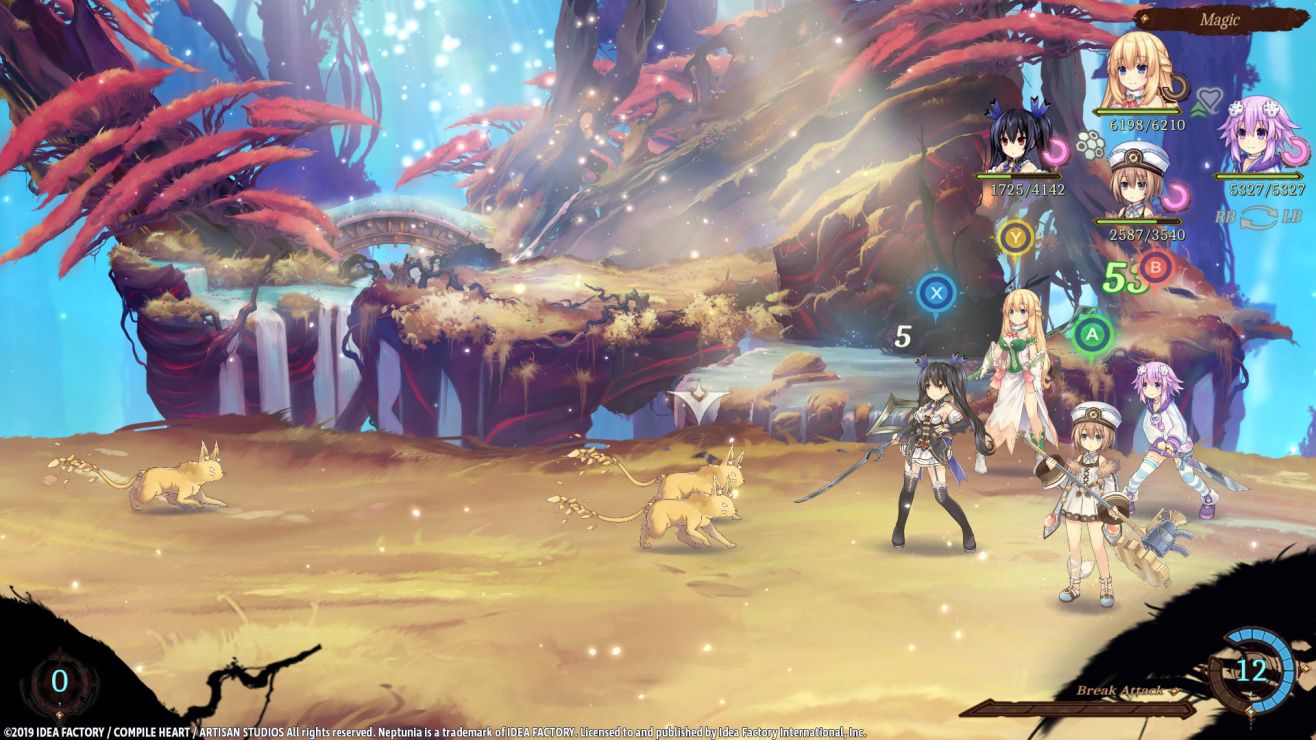 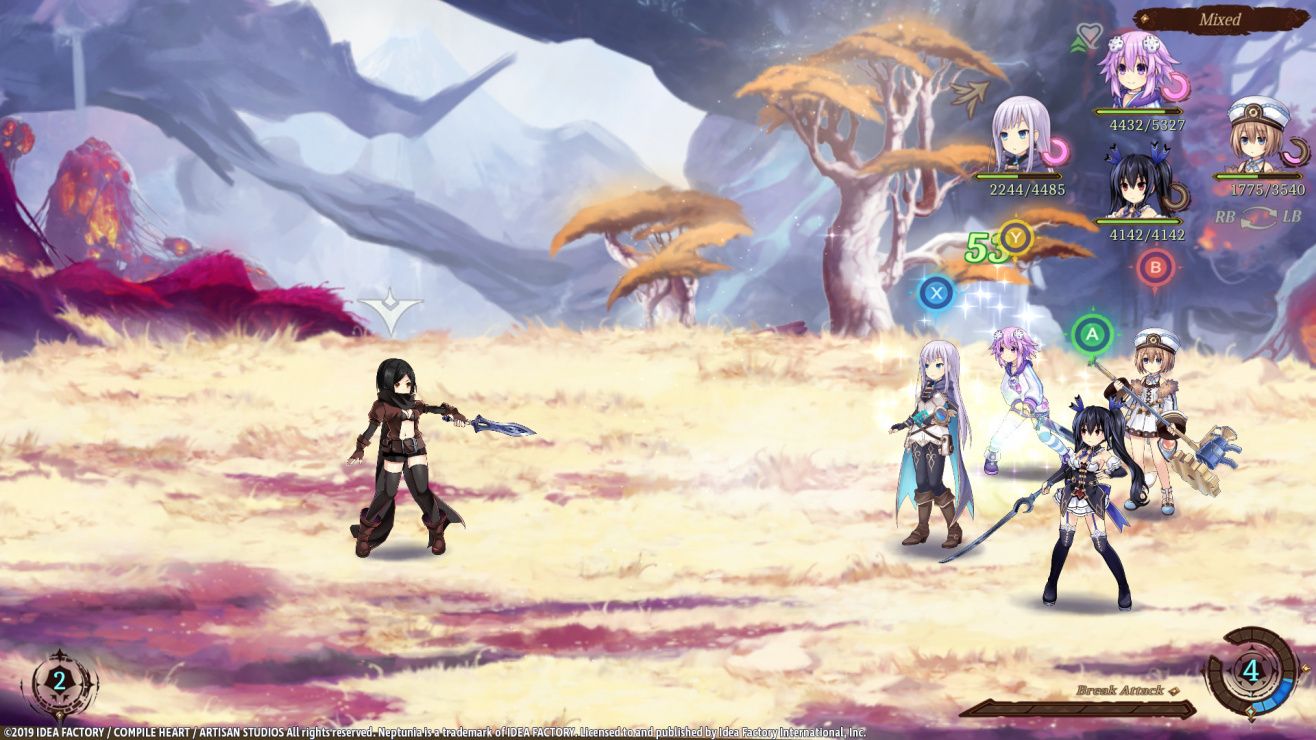 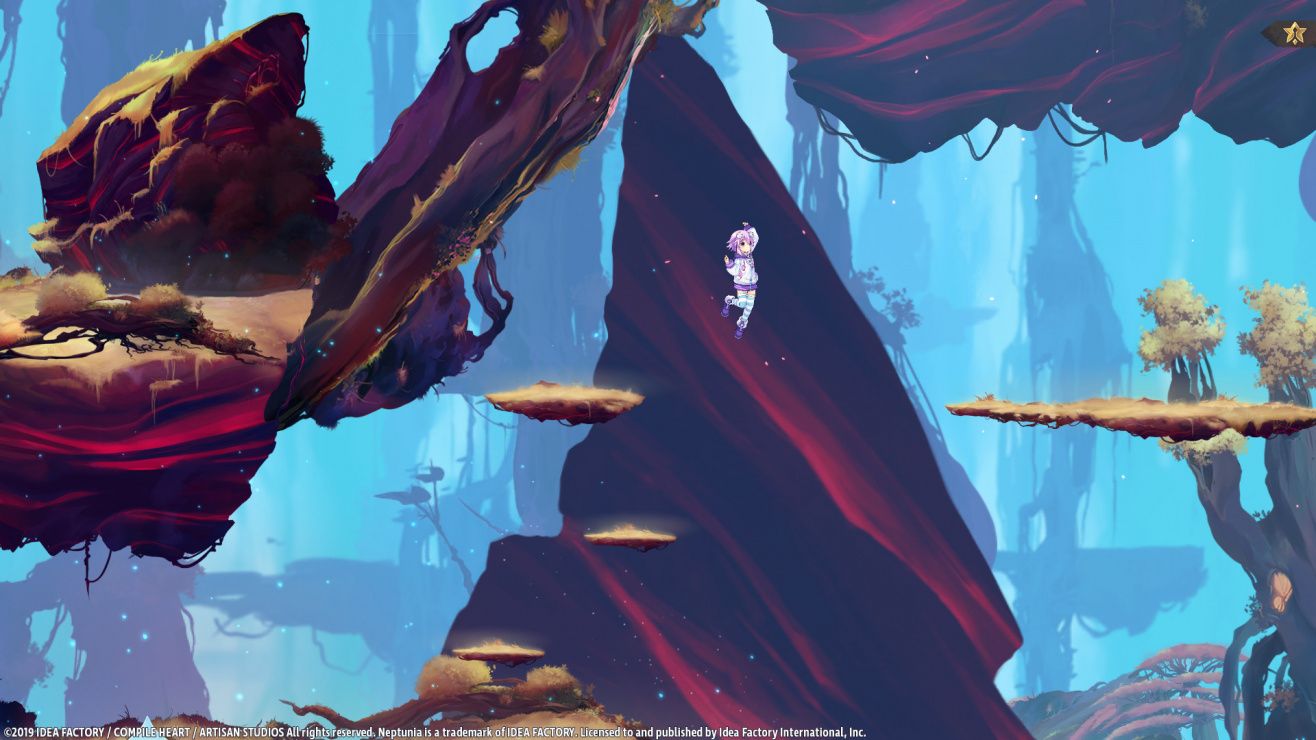 action fantasy fight japan platformer role-playing rpg
The self-proclaimed hero, Neptune, awakes in a familiar world, but has no recollection of anything other than her name. With the help of a mysterious girl named Chrome, as well as three other familiar faces beloved in the Neptunia™ series, Neptune embarks on a journey through the mysterious dimension to try to regain her memory. Little do they know, the world they inhabit is under attack by an enemy who wants to take civilization back to the time where 2D reigns supreme. Can Neptune and her friends save the world and 3D games as we know it, or will they be flattened into two dimensions forever?
Share Share Share
Promote for 50G

I was quite surprised. A game by a western developer in cooperation with the original neptunia devs.
+ Pleasant graphics
+ good animations
+ my fav Heroines pretty good in motion
+ i like the drawn bacgrounds
+ simple and easy to follow story
+ enjoyable gameplay
+ funny story with its moments :D
+/- music was ok
+/- controls were a bit clunky from to time
+/- minor bugs
- there a some serious issues with teh stat distribution (why has Noire so inferior stats?)
- short game (but its ok)
all in all for me as a neptunia fan i am quite surprised that this game was very entertaining for me. I saw more detailed expressions of the four goddesses. I am not quite fond of the visual novel style in the installments of this series, but this kind of story telling and cut scenes were by far pretty good. I enjoyed every minute of playing this game. I look forward to another 2D installment from both Artisan Studios, IF Compa etc.
Not all fans share my opinion, but it was something different and i am glad i played it :D

This game has good and bad qualities of it.
I liked the story in my opinion, it's very different from the other Neptunia titles, and I liked the music from the Deluxe DLC even though it's 192 kbps MP3.
The thing I hate on this game is that the battle system. I hate to admit it, it took me more than 20 minutes to beat the end because of lack of planning and I have to wait before I can attack.
But if you just want a Nep game in your collection, wait for Steam Sale and buy it.

Not worth $60. Get it at a discounted $20, then it's worth the price. Most people finish the game in just about 20 hours, I finished it just above 19. It was not JRPG difficulty. At no point in the game did I have to stop and grind or farm. All of the bosses and enemies were a piece of cake at the natural level. It's not a good RPG or a good Neptunia game, but it was still fun. There are pixel perfect jumps at the beginning but you get double jump later on that makes them easy. Overall, it's a good experience if you have the time to kill and want an easy sense of accomplishment.

Artisan treated the franchise well! I mean, it's not the best Nep game I've played, but it's solid nonetheless, especially the battle system (which was great). I had a lot of fun!
However, I should note: a disappointing aspect for me is that the whole premise of the series (characters representing video game companies/franchises) is largely ignored in this one. "Artisan" herself is the only new character where I got the reference. I even tried looking up what the new characters are supposed to represent, just in case I was missing something obvious, but as it turns out NOBODY ELSE KNOWS EITHER. Kind of a weird design decision, given what the series is about.

If you liked the previous Neptunia entries you'll like this one too. Nep nep
The story is very fun and entertaining.
Theres also quite alot of 2D platforming in this game and some abilities to do even more platforming.
I love the new change in gameplay and the combat system is a good idea.
The battle system is really solid and fun it features a stamina type AP system that fill overtime as the battle advances, which also fill way faster when exploiting enemy weaknesses combined with formation skill sets that let you switch between healing, buffing, attacking or using magic in real time. But you cannot use every skill in every formation so thats where the strategy is involved.
Theres alot of things to max out and tons and tons of skills and post game content to try to max out and try, characters learn skills by equipping weapons and accessories, skills have their own experience bar that fills a little after every battle, if you max it, you master the skill and your character doesn't require the item to be equipped to use that skill again.

Neptunia is known for their cute and funny characters and old rpg/game tropes, if you have enjoyed any other neptunia game, it should be an easy pick. For newcomers, if you like cute anime characters, rpg games and light hearted stories, I believe you should love the neptunia games and Super Neptunia RPG is a great choice to check out the main characters.
The 2D art style from characters to backgrounds are amazing reminds alot of 2D side scrolling rpg like (Valkyrie Profile, Odin sphere or Muramasa the Demon Blade )
NEPU ! !