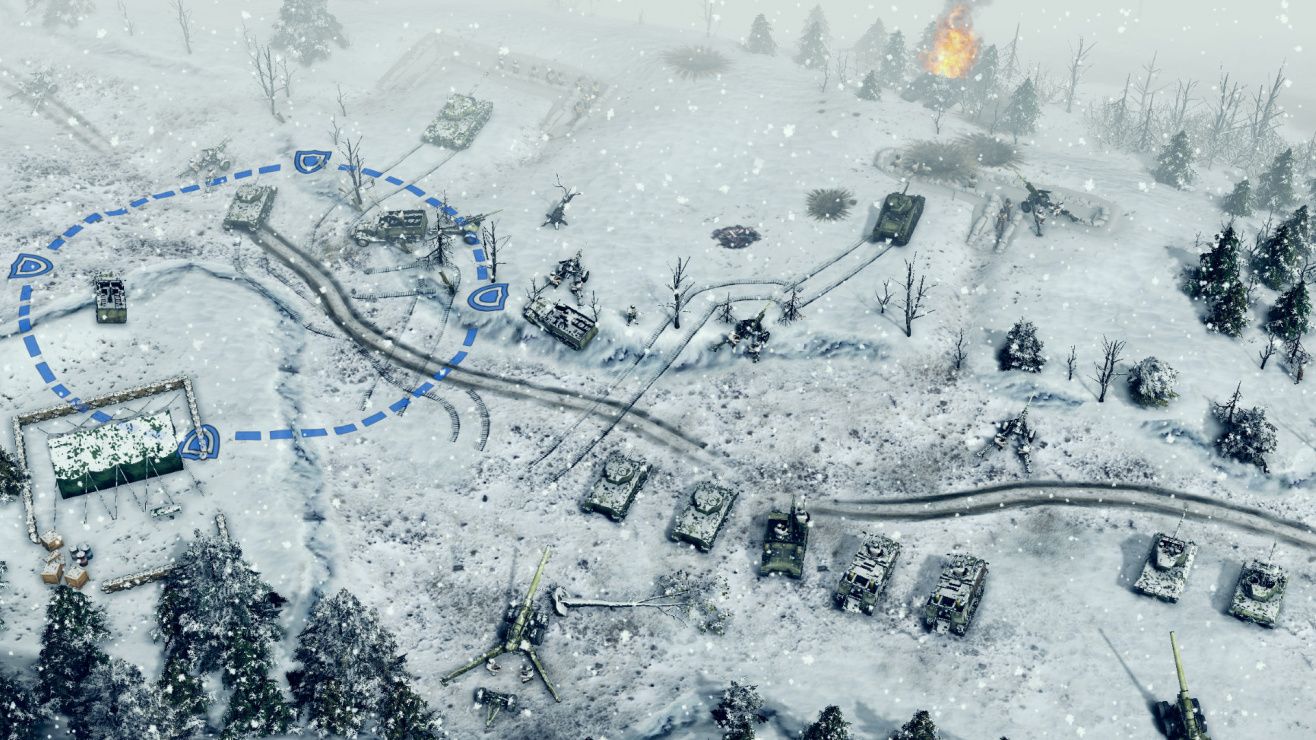 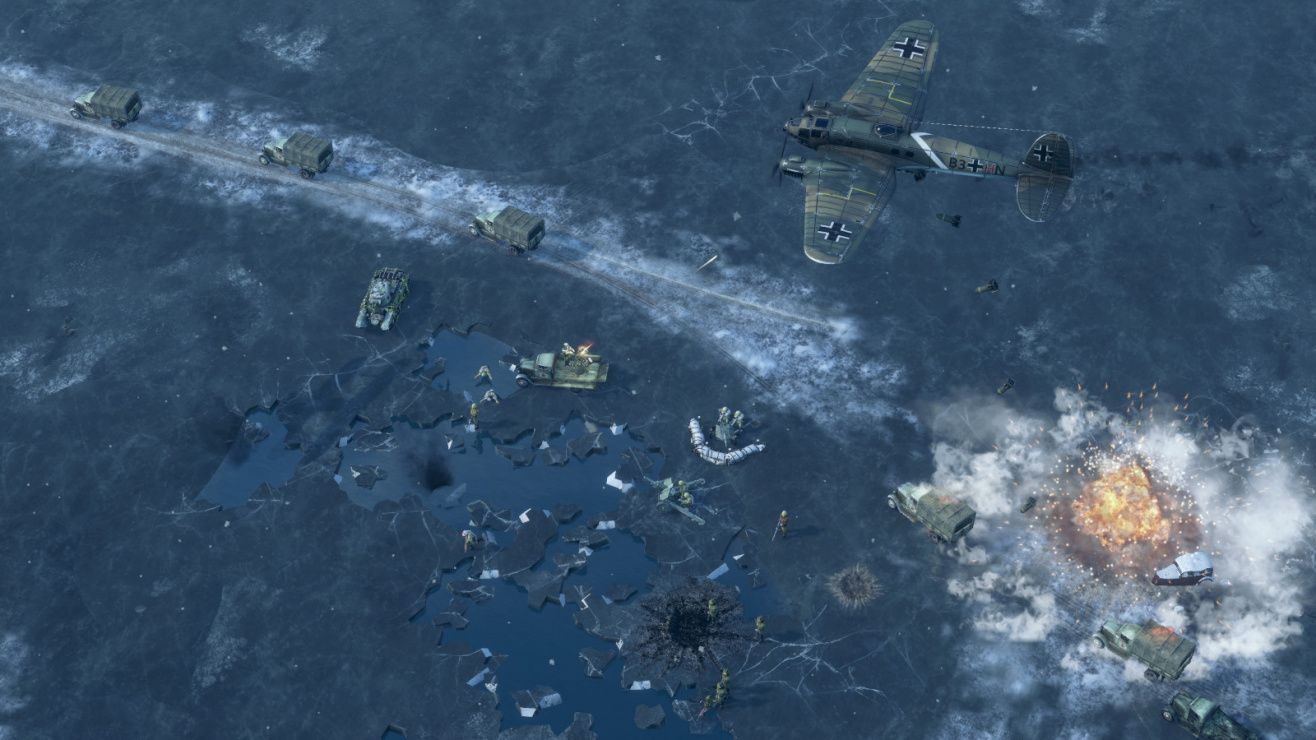 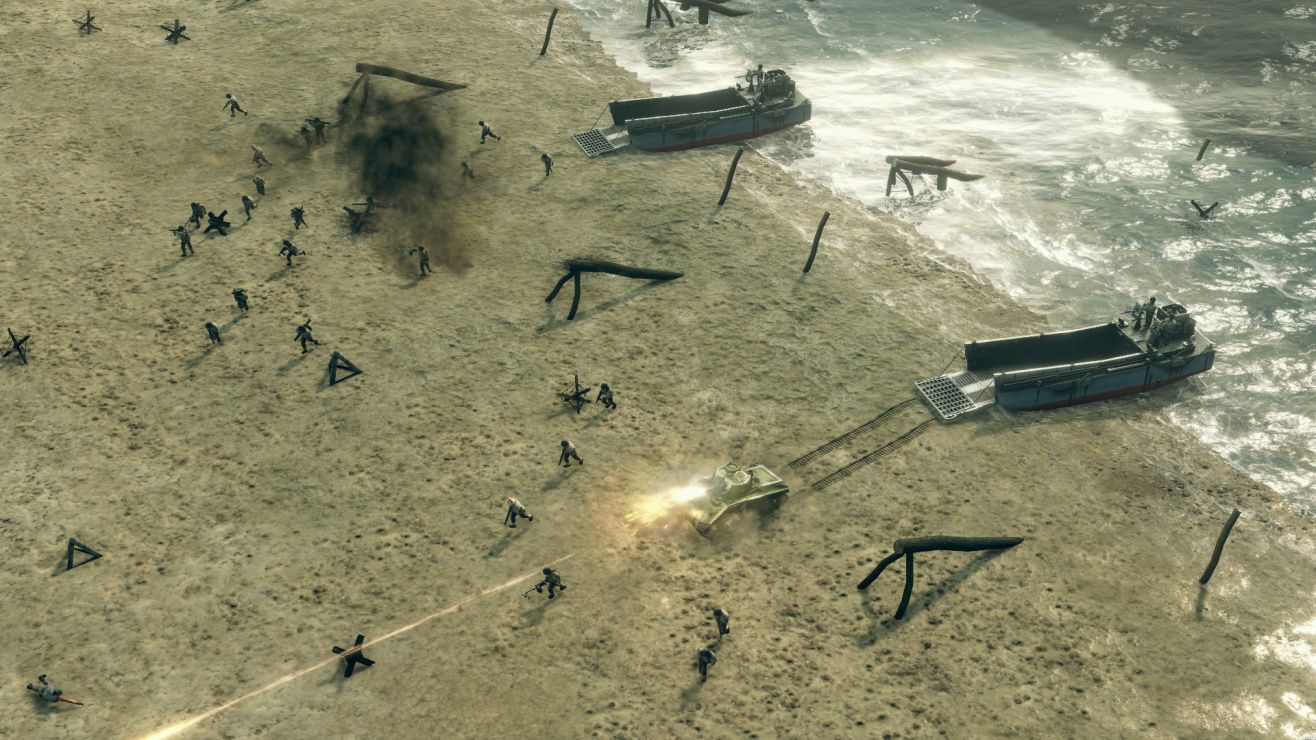 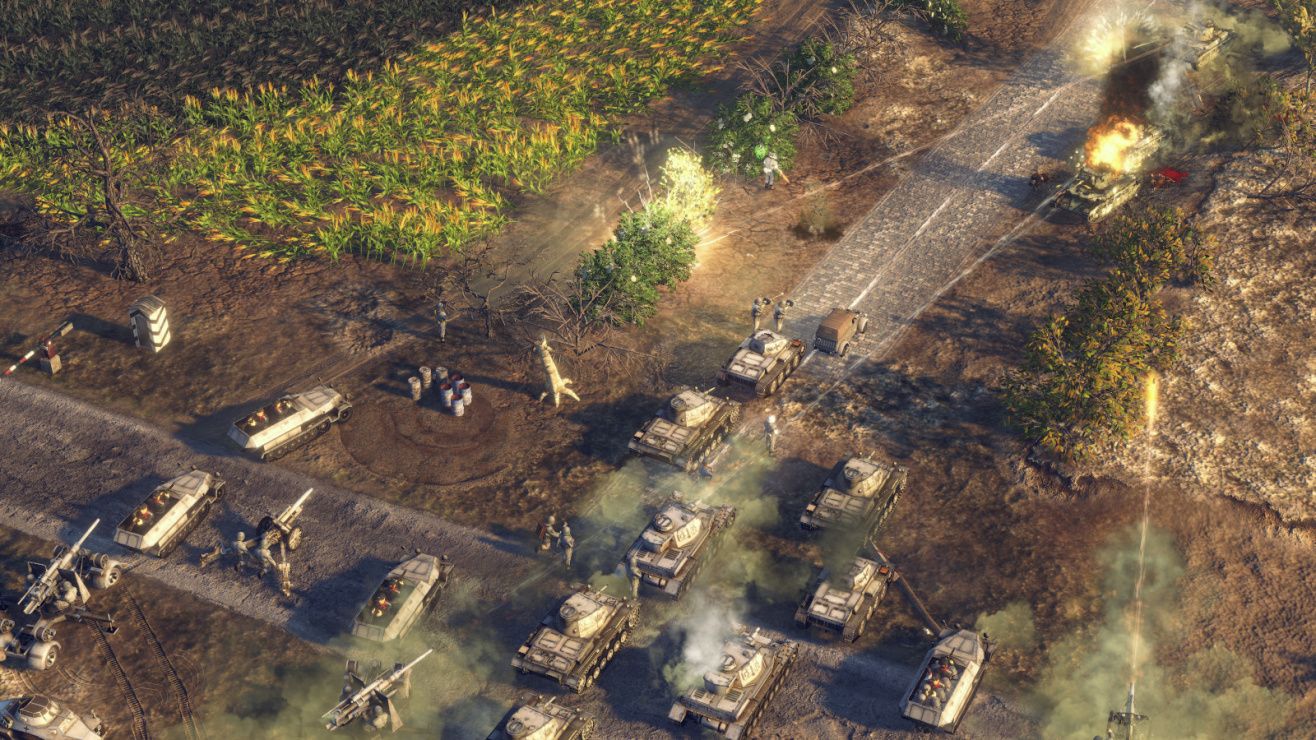 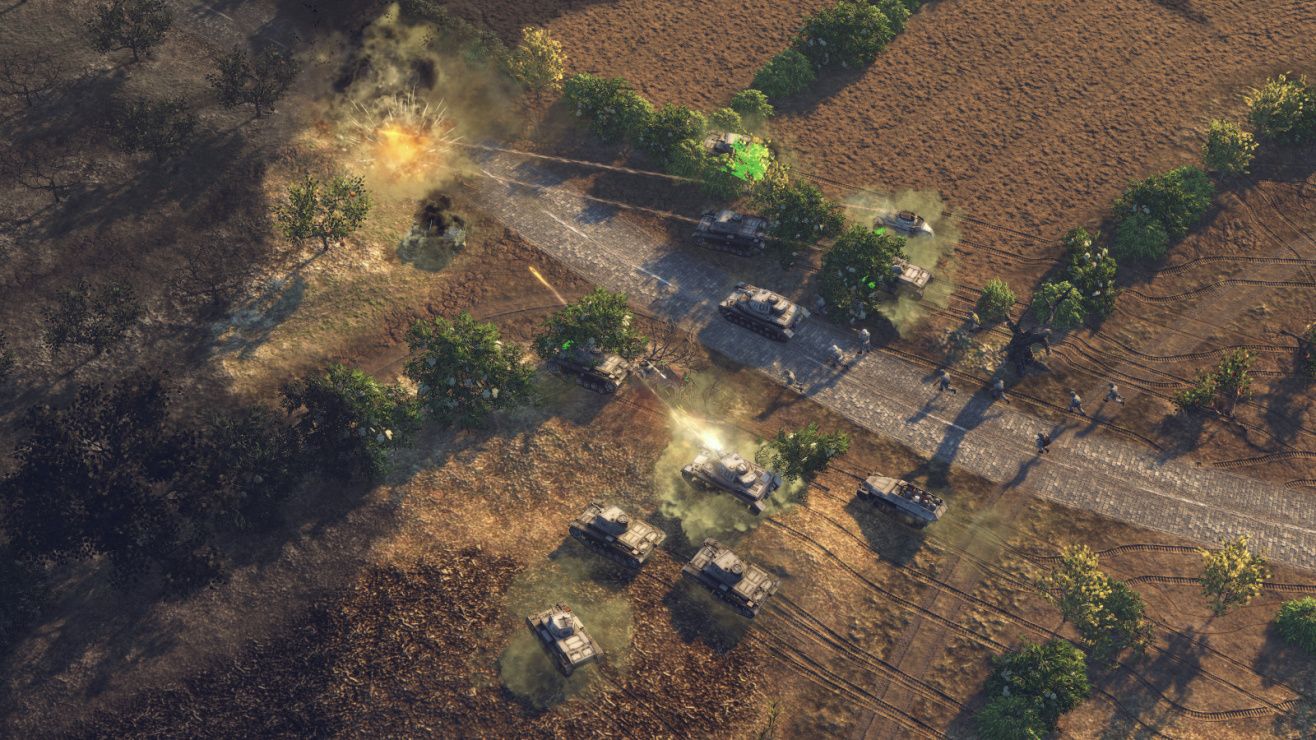 PC Steam Console Playstation Xbox multiplayer strategy war rts world online military historical ww2
Sudden Strike 4 sends you off on three extensive campaigns set amongst the battlefields of World War II. Commanding the Allied, German or Soviet troops, you will lead over 100 different units into battle; like the German bomber Heinkel He111, the Russian T-34 tank, the British Hawker Typhoon fighter plane and the notorious German Panzerkampfwagen VI "Tiger". In a first for the Sudden Strike series, you can now choose from one of nine individual commanders, such as George Patton or Bernard Montgomery, who will each allow for different approaches to combat and boast unique abilities. Prove your strategic expertise in over 20 demanding singleplayer scenarios, the challenge-focused skirmish mode and the ultra-competitive multiplayer mode via Internet. Exploit the weak spots of tanks, set up an ambush, occupy buildings with infantry, outmaneuver the enemy with clever positioning or unleash devastating air strikes – how you approach each mission is up to you!
Share Share Share
Promote for 50G

Just started playing the game. Actually I have just started playing any video games . I'm a retired senior citizen with time on my hands. When I was a teen I played Avalon Hill board games. No personal computers back in the late 60's. I like the fact that the game is historically accurate while still retaining the ability to achieve a somewhat better than historic outcome. The AI is also fairly balanced. It simulates well the feel of a real tactical battlefield. If you've ever played Tactics II, a simultaneous movement board war game, from the 70's it has that same appeal of not knowing the enemy's moves as you engage. Except it's much better.

I have been playing sudden strike games for years, it was a game that I shared with my dad. They don't make many great RTS games anymore, especially ones that can span gameplayer generations from 40 years old to 70 years old like this one does. Keep up the good work and please make more games.

If, like me, you hate point-capture gameplay like CoH and MoW, this is the game for you.
No resource gathering, no base-building and no points for capturing a flag.
You start with a set number of units and you get reinforcements for completing objectives.
I only play solo and have tried most of the WW 2 rts games out there and the only other games i really enjoyed was Men of War series. Sudden Strike 4 is a bit like a mix of Company of Heroes and Men of War.

One reviewer described SS4 as 'arcadey'. I found it more like a deliberate chess game. The enemy force has a limited number of fighters and vehicles just like you do. They do not spawn an infinite wave of more combatants. SS4 does not have a dramatic storyline that follows a story in the game's own world. Instead missions are inspired recreations of historical battles of World War II.
I am fond of more realism. Even when that realism puts a drag on your attention span, or makes the game a bit inaccessible. Sometimes realism can make a game's learning curve too steep for busy people (I'm thinking of Hearts-of-Iron 4 here). You can pick up SS4's mechanics quickly which is just a matter of learning the basic controls.
SS4 is like Company-of-Heroes but with limited ammo and limited fuel in the vehicles. It sacrifices "game-like balance" for the sake of combat realism. Here are the effects of that decision in general :
1. Foot soldiers and infantry don't stand a chance against a vehicle with a mounted gun. Infantry could get a grenade onto a vehicle, possibly damaging its engine. Maybe one lucky guy will survive the encounter if he crawls away.
2. The missions take a really long time to complete.
3. The distance that weaponry and guns are fatal is very wide. Something off the edge of the screen can kill you.
4. The missions put a limit on the total soldiers and armor. You can't refresh them out of a base that infinitely creates fighters and vehicles. You have to make-do with what you have.
SS4 has unlockable perks/upgrade tree. You must decide between three types of generals to lead your army, each with his own philosophy and with differing combat perks. These decisions have a huge impact on what takes place on the field.

“上尉，再派一个人去前方侦察。”
“抱歉,长官，最后一名步兵已经死在前方的灌木丛里了。”
“......，我们好像还有个卡车司机？”
"Captain, send another man to scout ahead."
"Sorry, Sir, but the last infantry soldier already died in the bush ahead."
"Ummm..., we still have a truck driver, don't we?"

One of my first WW2 RTS game is Sudden Strike, that game made me fall in love with WW2 RTS genre, And it all started back then in 2002 with Sudden Strike. My favourite one is Sudden Strike Resource War. I didn't had internet back then, so I spent most of playtime with built-in Mission/map editor, fecking awesome game.
I've skipped Sudden Strike 3 due to seeing it being not a good game, let alone a good Sudden Strike game.
Sudden Strike 4 is a game with great ideas but not soo good execution. Under the hood, you can see original Sudden Strike game. Trouble is, the gameplay layer is not implemented correctly.
The Good:
- Visuals are really nice, plus there is dynamic weather effect.
- Vehicles models,
- Plently of Campaigns and mission for Single Player experience.
- Varius locations, maps.
- Resources management, such as ammo and fuel.
- Different Generals with different benefits to use in the field,
- Playable nations: USA, British, German, Soviet, Italian, France, Finland.
- Off map Air support, it's really cool seeing your ground attack aircraft performing strafing runs.
- Limited number of units per game, so you have to do with what you have and not call in endless waves of reinforcement.
- Artillery is very effective and use a lot of ammunition.
- If there is rain, some maps have deep mud spots where your vehicles will get stuck and can not be moved. Enemy AI is also affected with deep mud.
- Your soldiers will get badly injured, if medic is not there to revive them, they will die soon.
- Ability to repair and rearm damaged or recrew abandoned vehicles.
- Units Pathfinding is not bad.
The Bad:
- Aweful view range, way too short. Plus your units have shorter view range than AI. So you will be attacked and geting killed from Fog of War while your units just stand there and take it. Very stupid design.
- Way too short engagement range, even arty has max range ~50 meters.
- Small map sizes.
- Shells and other projectals are 2D models, you can see them bend in the air.
- Arty and other HE shells landing right next of enemy Arty piece (howitzer or AT gun) and it will do no damage to enemy. When I say next to it, even when it hits somehow below the arty piece.
- Game has issue of you AI not moving, 50% of time you will click for units to move but the order will not be processed, even with AI yelling "yes sir". They will not move, unless you click again. Selecting them as well sometime doesn't register.
- When you send your infantry to eliminate crew of enemy AT or howitzer. They will shot at metal piece and not at crew. So you can see 30+ soldiers sending hail of bullets onto enemy AT, 10 meters from enemy AT gun and not a single bullet will be hitting crew. In order for them to actually hit the crew you must move infantry right behind arty piece, no not even sides but behind.
- Hand grenades are only manually used by you, AI will not throw them automatically. In Original games it was auto throwned.
- Your AI does not prioritize targets correctly, sometimes it refues to attack the enemy because, I don't know why.
- Infantry models are too simple looking, while vehicles look good. Kar98 rifle model looks like a big wooden beam. Horrible to see.
- Germans have only one color Grey, Russians green, allies grey/brown. Regardless of weather, location and year. (Germans do have brown/khaki in Africa DLC)
Biggest issue for me is that View Range, too short and lower than enemy AI, It's so stupid when your units can not see that someone is shooting at them just one pixel further outside their view range. plus Infantry models look goofy. Overall it's an 6.5/10 game but with included DLC, without it there's not much to do there. There is skirmish but it's just rushing around. It's an okay game to try and play a bit...
Overall I am dissapointed.

Highly recommended if you mostly enjoy tactical aspect of strategy games rather than base building. It gets quite challenging at times but gameplay is very fun and rewarding. As you get limited amount of troops, game
forces you to calculate every move before advancing on an enemy troops. (If you don't you get screwed real fast) Missions based on real WW2 battles is also cool addition and adds certain immersion to the gameplay. Overall, if you enjoy rts games I think this is a good option to consider, especially now when this genre is less and less represented in the industry.