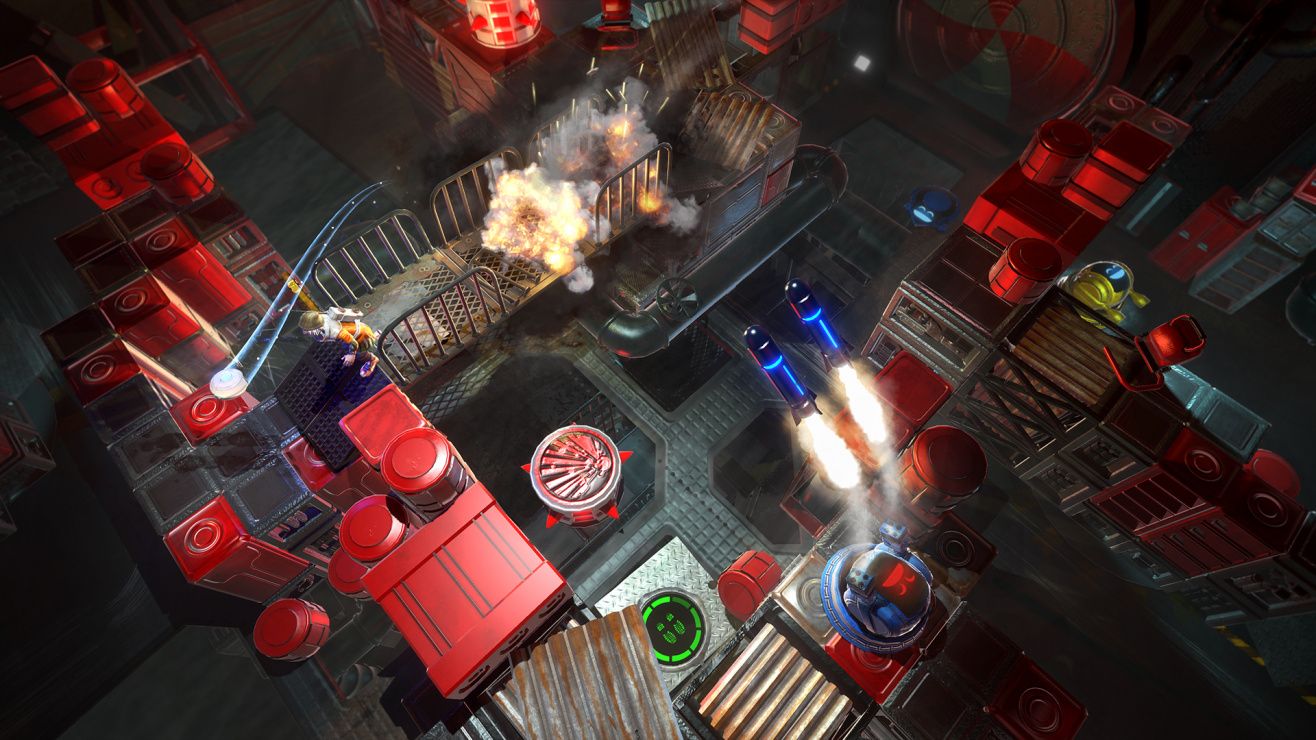 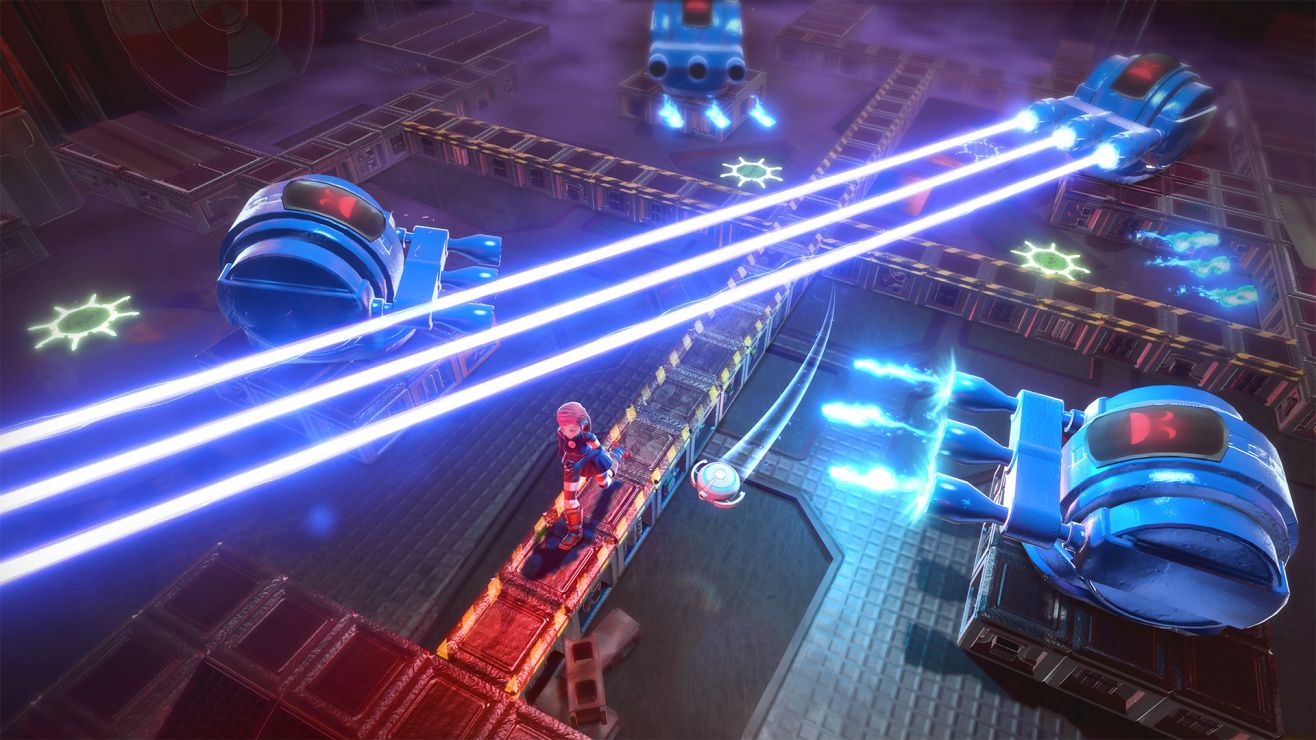 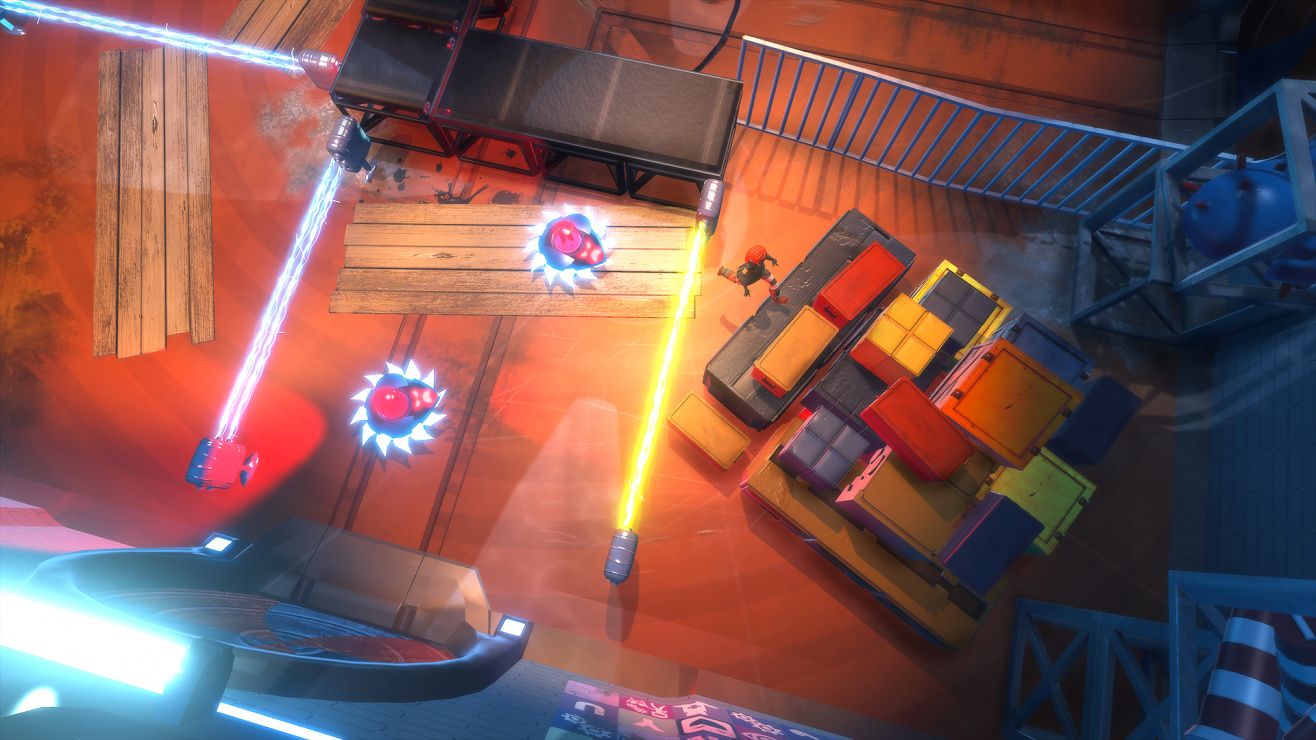 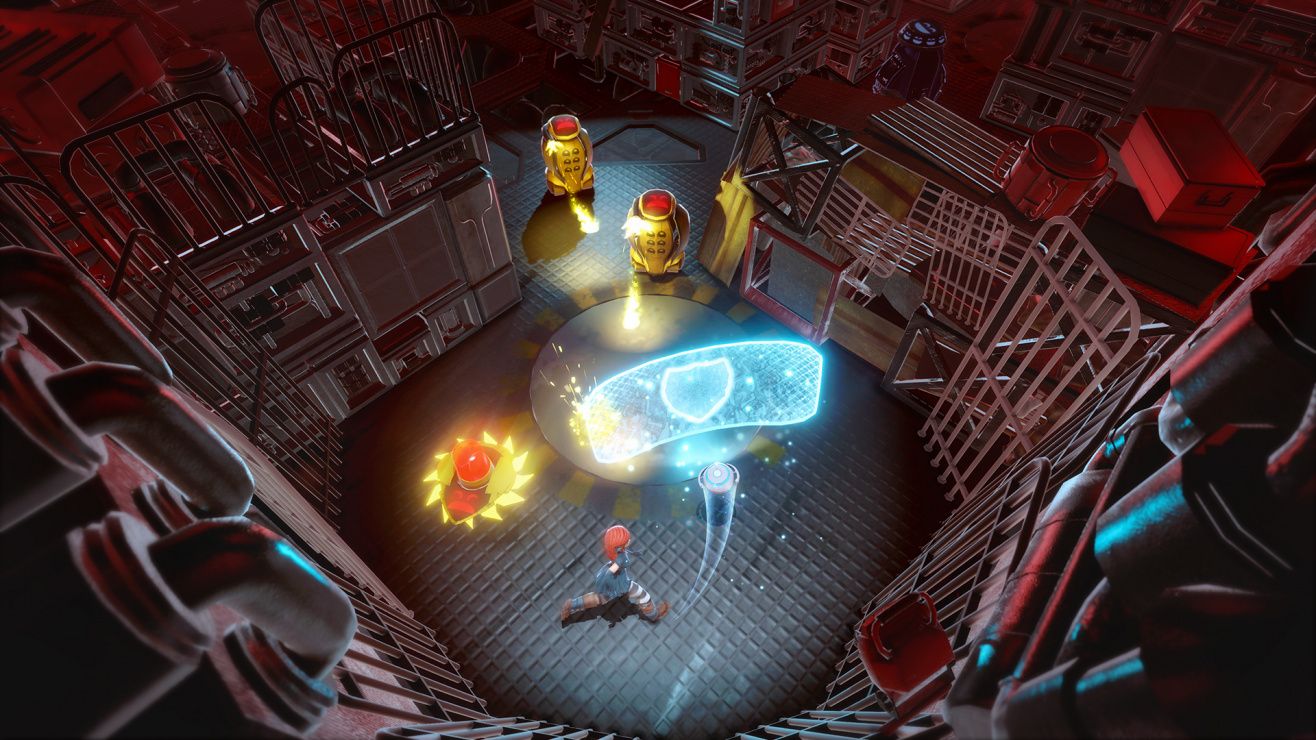 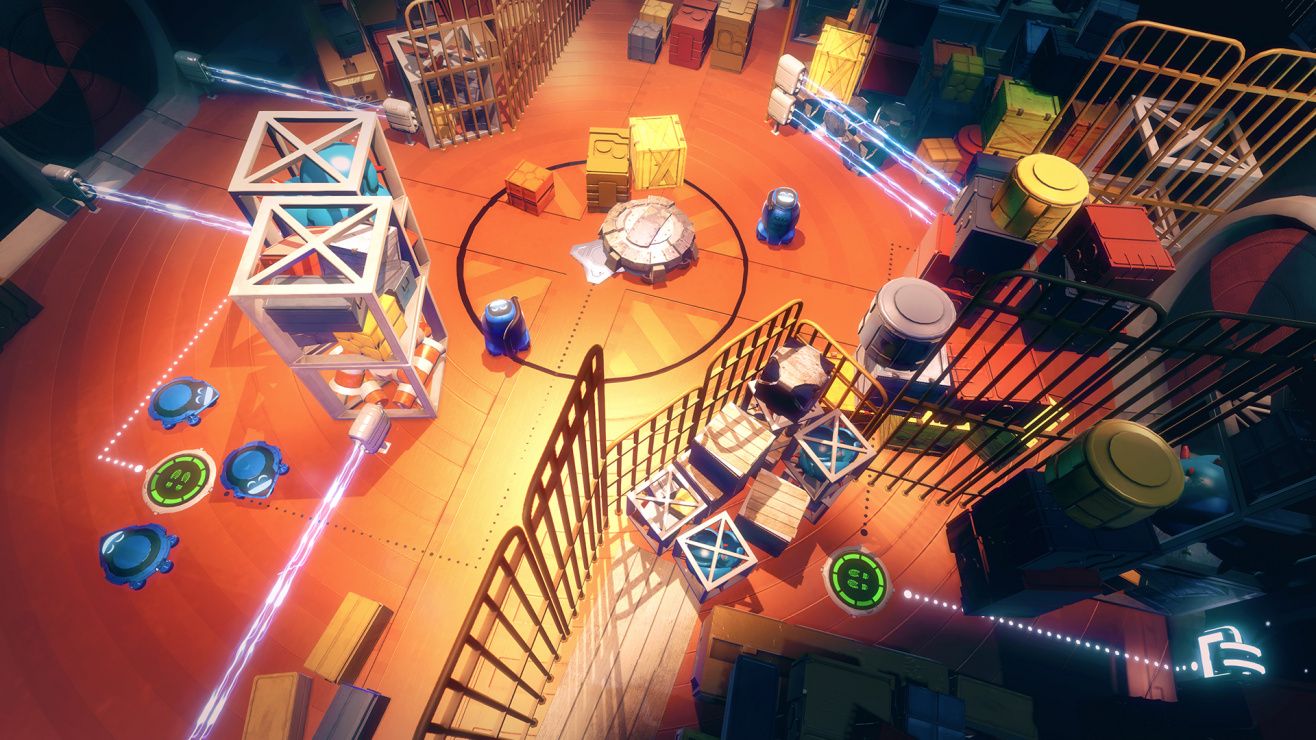 action adventure indie puzzle strategy tactics
Subaeria is an intense action puzzler with roguelike-elements. Players use their wits to manipulate their enemies into destroying each other. They'll have to be smart in how they approach different situations and think strategically on how to use their environment and abilities to defeat their enemies. Players follow Styx, a young girl who’s out for revenge after her family is murdered by the overlord of Subaeria. She must fight her way through droves of murderous robots by pitting them against one another. As she progresses towards her goal of revenge, she’ll explore the underwater city of Subaeria to uncover the mysteries that lie below the depths.
Share Share Share
Promote for 50G

Please note: a Steam key for this game was provided by the developer.

Rating: 6.1 (out of 10)
Want to read more of my unbiased reviews? Just click here.
If you have any kind of feedback - positive or negative - please feel free to leave a comment (in case of negative feedback please try to keep it constructive). It would be greatly appreciated!
Would you like me to review your game, or do you know someone else who would? Please feel free to contact me: just leave a message on my profile and I'll get back to you as soon as possible.
Early Access ratings may change at any given time, depending on the updates. There's also the possibility that certain features discussed in this review will be updated or removed later during development, making parts of it obsolete. I'm afraid this is beyond my control.

Steam Early Access & More
Illogika’s first original IP Subaeria, allows the player to explore a unique sci-fi setting via four playable characters that are are both perpetrators and victims of the injustice that their world faces. As you discover this world, you will dig into topics of a governing democratic society, a secret shadowy organization, and mysterious algorithms that are currently empowering the status elite. Facing these tales of social and political manipulations gives the game a fresh and original vibe.
Click this link to read the full article:

I've passed only 6 hours playing Subaeria, but I think i'll spend way more that just 6 hours on this game.
Subaeria has all the qualities a good game should have. A nice setting, inspired design, a solid (and fun!) gameplay, but, most of all AN INNOVATIVE CONCEPT.
The developers calls Subaeria a Roguelike Action Puzzler in it's official website. I find the definiction restrictive. It's like calling Portal a FPS. Subaeria, in my limited experience, it's just Subaeria. One of its kind.
The early access version features one character (and her storyline) with multiple finals, tons of robotic enemies. The game doesn't explain in detail what you're suppose to do: it's up to your imagination (and your experience, I'm pretty sure you'll be dying on a couple of runs before you can grasp all the mechanics). The levels (or cubes) are reshuffled everytime you die, so don't think you'll be facing the same steps when you start a new game.
As you may have noticed, I'm in love with this game, even if I don't usually play and like indie games. I can't wait so see new features added to it. So far, so good.
P.S: There are some technical issues, it miss a save option (sadly i had to restart a whole run twice cause i had to close the game) and the main menu is somewhat empty, but its qualities stand above every flaws it has.
It deserves all the support the Steam community can give.
For the developers: PLEASE ADD MORE STUFF I CAN'T HAVE ENOUGHT. Thank you <3

The begging of the game was nice where it taught you how the game works, with a nice asthetic look but annoying, although soon after that mission ends the look of the game changes to what you're seeing the the trailers/screenshots, so that's a relief.
So starting at that point I was presented with a nicely drawn cutscene that presented the story of the character I'm playing as, which is charming, and I began my adventure.
The visual look of the game with bland and colorful textures, alongside nice but generic enemy designs bbut a nice character model.
The controls is of a twin-stick style where one of the sticks you control the characters movement and the other stick is you controling a drone-companion, and that companion would help you get by enemies provided that you picked up and ability for it. Plays nicely with how the gameplay is designed.
The way you get passed enemies by by either tricking them into smashing into a laser that is the opposite color, or smashing them into other enemies with different colors too. This is somewhat fun and refreshing to have to do instead of just shooting them like in other games.
Story wise I'm satisfied with the cutscenes and quick dialogue the game has with other NPCs, and one of the endings I got was the bad one and even though dialogue and story presentation was short, I had an emotional impact that was satisfactory, which was nice/surprising.
Overall I think the game is greatly worth it for the asking price, provided that you'd stand how the game has optimization hiccups and no quick-save options and a handful of bugs with a lackluster explanation of its more advanced mechanics/progression, but that's why it's in early access and you'd treet it as such and hopefully provide some nice feedback.

So far so good. The game looks great, love the story, love the premise. Has a unique feel to it.
I do find the controlling the drone unnecessarily challenging. For example, the drone moves a bit herky jerky at times with the right stick, and trying to hover over things to collect them is harder than it needs to be. Smoothing out the controls along with adding a snap to grid type system for the drone when hovering over and collecting items would make more sense.

First impressions & gameplay video:
I found myself pleasantly surprised by Subaeria. Each room as you progress requires quick thinking and fast reflexes and the addition of RPG elements make a nice change from other rogue likes. Controls are nice and fluid and the random generation on rooms seems pretty great. Looking forward to seeing what they add later before it leaves Early Access. So far seems like a solid puzzle game which makes great use of action and rogue like gameplay. Very impressed!

If you prefer video/voice, you can watch the same review here.
The game is developed by illogica studio, who you might know as developers of another puzzle game - Hitman GO, which was initially released for mobile platforms but recently has made its way to Steam as well.
Subaeria has been out for some time, but I only got around to record it now because of the technical issues it had at the start (some of them remain to this day).
So, this is a rogue-lite action puzzle game.
The target is to clean your gaming debt while evading evil robots who are out to kill you for it.
The catch is - you don’t have any weapons or equipment to fight them.
You have to manipulate those pesky robots into destroying each other.
And to help you with this, you have a personal drone.
You will find various abilities and powerups for him, that are also limited to manipulating robots.
Like say, take over robot control, or stun robot, or make robot go berserk and attack its allies.
So, in the end it comes down to use of the environment and enemies’ abilities against them.
I wish they would invest more into player-environment interaction though - currently the only way to affect the surroundings is - once again - through enemy robots - which is quite limited.
The rooms you have to fight in generally have some boxes and even exploding crates lying around and while you can indeed use enemies to blow them, there’s no way to do that yourself.
I think it would benefit this game a lot if the developers were to provide a way to manipulate the environment as well - not just enemies.
The game is set in a pretty cool dystopian underwater world that has a lot of cyberpunk vibes to it.
The main story is nothing special, but the characters, world and dialogues have quite a lot of personality.
It’s possible to unlock four playable characters, each with their own storyline as far as I understood.
And what’s even more unusual for a rogue-lite game - there are several possible endings for each of them depending on your quest decisions.
The level layouts are randomly generated, but rooms seems to have a limited number of preset layouts.
After several hours of playing the game, I started to recognize quite a lot of repeating rooms.
Same goes for enemy types - there’s not that many of them.
Essentially, there are two types of enemies: slicing enemies that chase you and shooting enemies that shot at you.
Everything else is pretty much combos of those two: static turrets, grenade shooting enemies, slicing and shooting enemies, and so on.
There are several bosses in game that mix this up a bit.
Although I’d found them to take a bit too much time to beat though (or maybe I just suck at it).
There are several things that are currently stopping me from thoroughly enjoying the game.
One is extremely long loading times - it can take up to 2 mins to load into game. And that’s in a rogue-lite game where it’s quite easy to die.
Another one is very unstable framerate and somewhat glitchy lighting effects. Framerate can randomly jump from solid 60 fps to 1 fps in a cutscene and back to 60 after cutscene ends. This happens for no apparent reason.
And the last one is absence of any way to save the game - once you quit mid-game, there’s now way to continue from you last point, you’ll have to start from the very beginning again.
Hopefully all of those will get addressed in one of the upcoming patches.
All in all, it’s a pretty enjoyable little action puzzler for the price. It does requires some more technical polish and maybe some thoughts on more meaningful player-environment interactions.