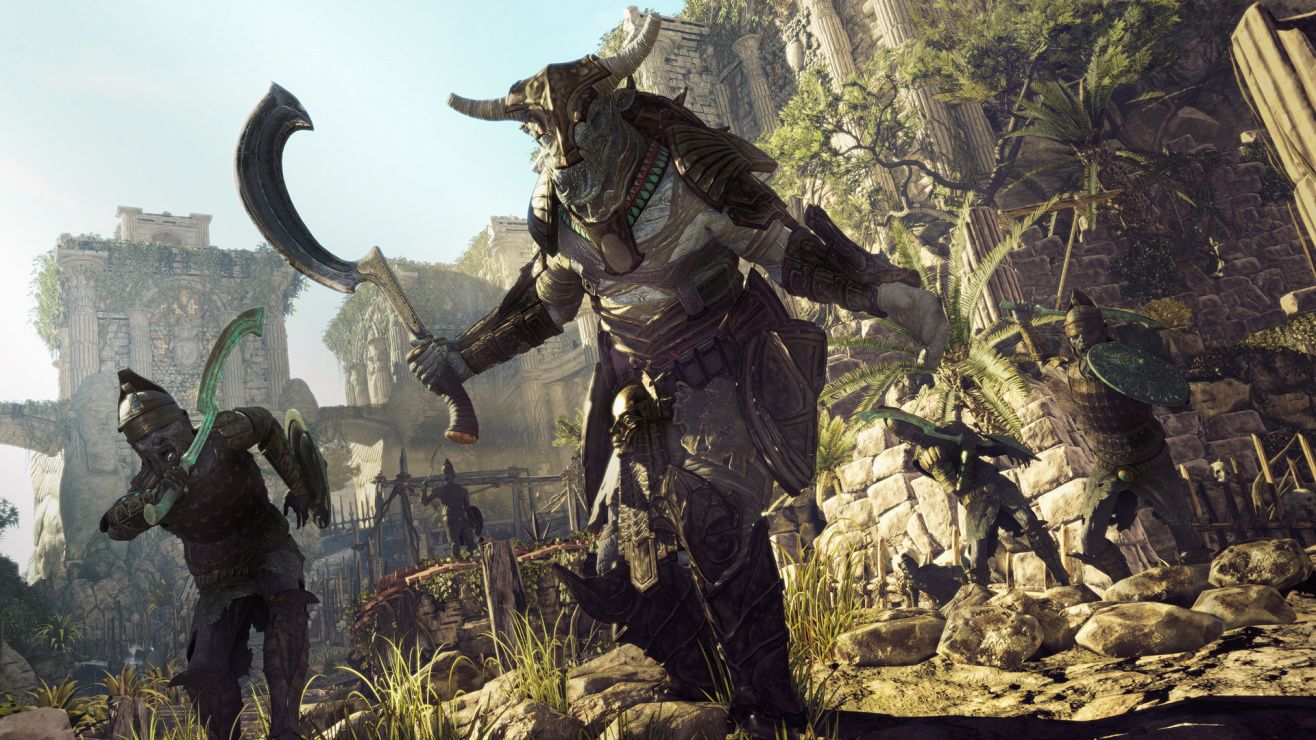 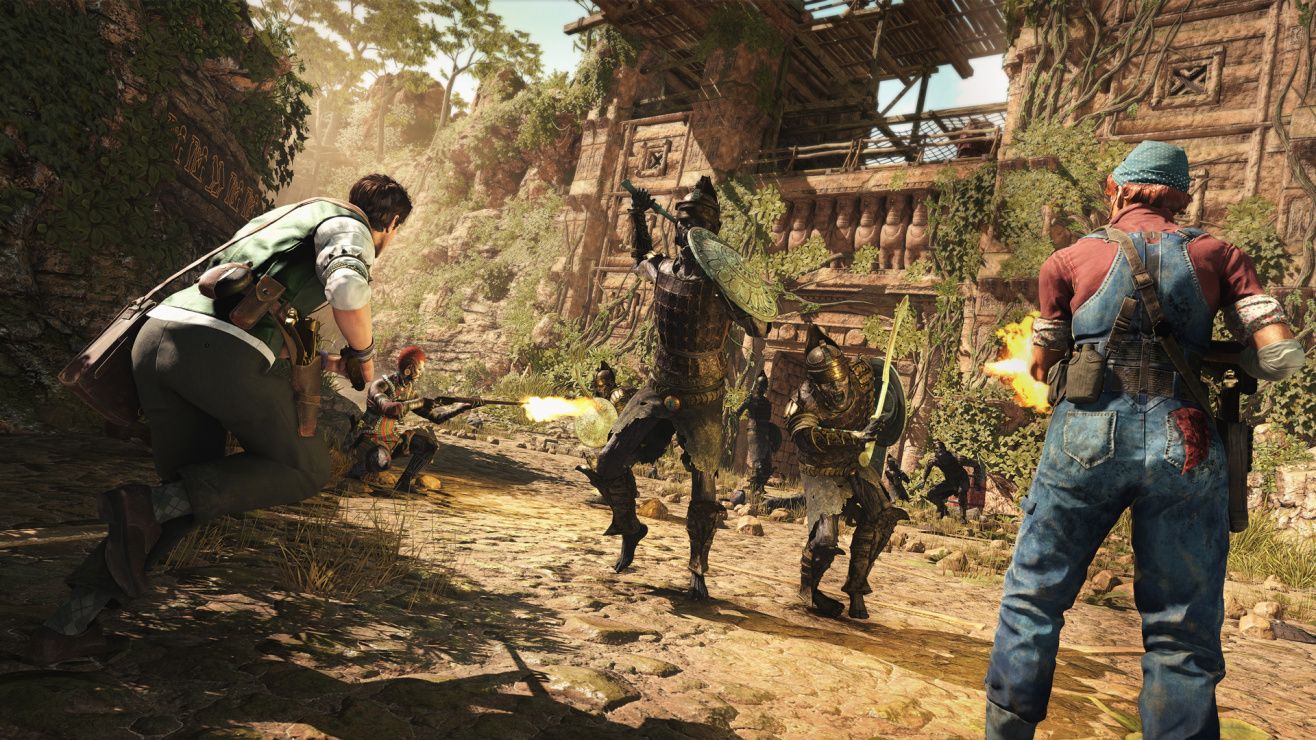 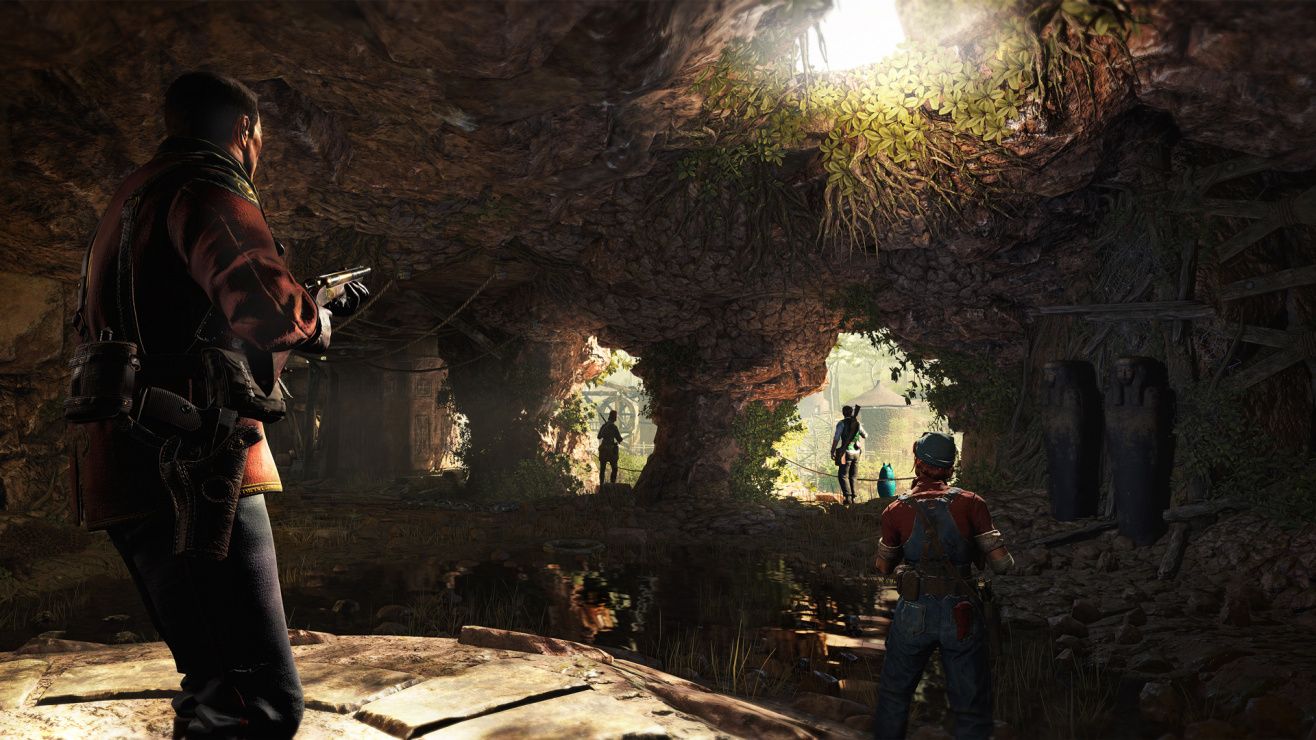 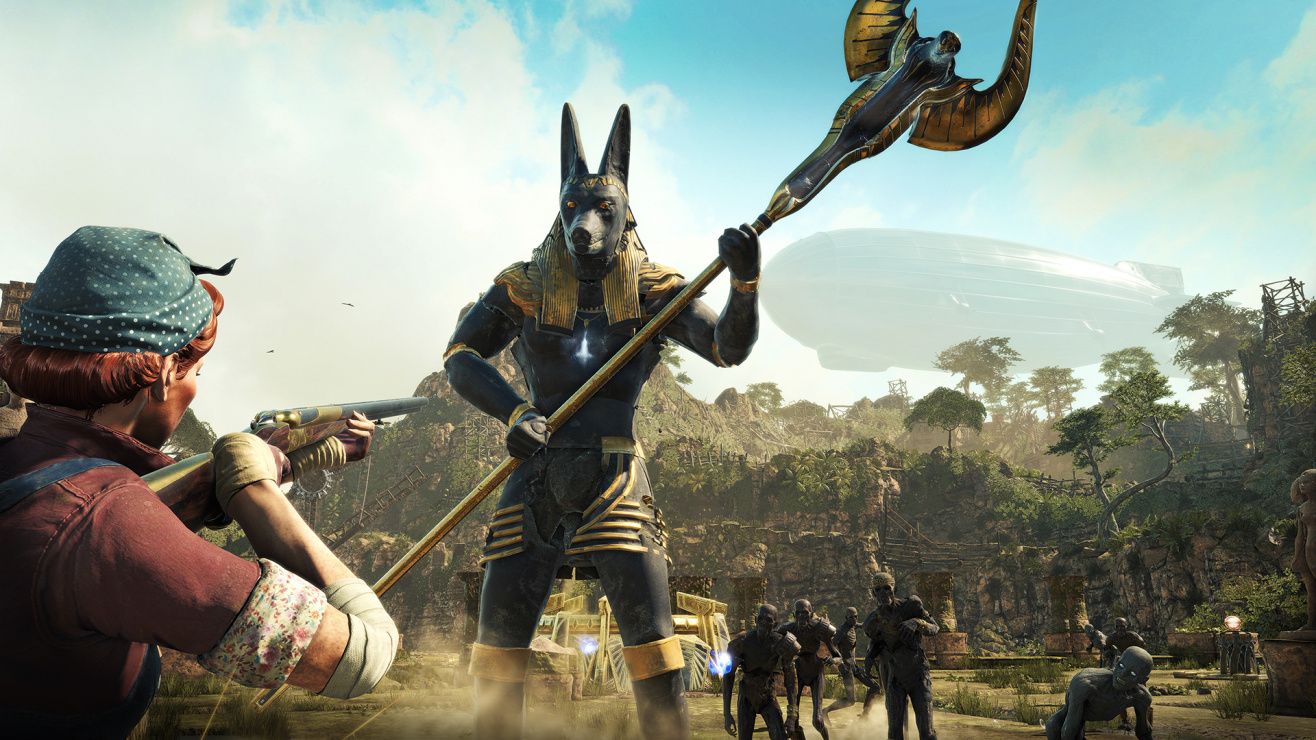 action adventure horror multiplayer open world shooter undead
Seteki the Witch Queen has risen once again, and only one troop of daring heroes can stand against her fearsome army of mummified monstrosities: The Strange Brigade! Explore remarkable ruins, solve perilous puzzles and uncover tantalising treasure while blasting your way through an array of undead enemies in thrilling third-person action that’s certain to bring out your inner adventurer!
Share Share Share
Promote for 50G

Pick up the deluxe edition with all the DLCs on sale only as the regular price is too high for the content. Gold and loot is not shared and traps can be friendly-fired, so this game should be played with existing friends rather than randoms. But if you’ve got a good friend or three to play with, this is a fun one! Lots of retro goofiness in an Indiana Jones type setting.
This is a co-op shooter like L4D or Vermintide that has a far more lighthearted setting than the dark and serious tone of those two. Probably closer to Serious Sam. There is a male British narrator that keeps a running cheeky commentary while you play, very much like Lord Shaxx of Destiny 2. Some people might find it annoying, but personally it added another layer of enjoyment for me as I found the banter amusing.
It is a 3rd person shooter without hip fire shots for some reason. There is no cover, you rely on dodges and crowd management. Most of the hordes are very slow moving and can easily be kited around into traps, but there are a few fast moving and ranged enemies scattered around to pester you. Some of the hidden items can be challenging to locate with all the foliage. The puzzles are not difficult to solve if you’ve played puzzle games before, they’re just basic pipes/memory/etc games.
Additional weapons are bought via looted gold and upgraded via looted gems. I did not have much of an issue getting enough money to unlock the weapons I wanted to use or getting gems to slot, but I worked with my friend so it wasn’t a problem for us to take turns opening chests to get what we needed. Amulets are your character’s special attacks and are only unlockable by completing hidden object collections on the maps — some amulet skills are wildly powerful while others aren’t quite so useful, so make your choices count.
The game supports both DX12 and Vulkan, and I have not come across any bugs thus far in my time playing co-op campaign mode. It also offers a Photo Mode for players who love taking screenshots, which offers built-in camera aim, lens and filter options for staging your shots.
The cast of characters are colorful and unique - the base characters consist of an African warrior woman (and it's cool that she is the first character shown when you log in to the menus), a Rosie the Riveter clone, an academic whose specialty is finding hidden treasures, and the stereotypical sharpshooter who happens to be related to Karl Fairburne of the Sniper Elite series. DLC characters bring more variety with an Indian princess, a Japanese shipwreck survivor, a Texas cowboy, an Amelia Earhart clone, and a very posh gentleman explorer. Something to suit everyone’s 1930s aesthetic.

two words come to mind here: underrated & overpriced.
underrated because it's a really good game but seemingly few people want to play it. that's a shame, really.
overpriced because a friend bought me this game on release and it was 80€ for game + season pass. i got around 15 hours (story missions only with dlc missions, without multiplayer time and other game modes) out of it. that's really not much.
the presentation of the game is superb. great graphics, solid story, very good voice acting & humor and fun gameplay. big maps for fighting, looting and exploring. there are lots of treasures and secret areas hidden in the world and a lot of undead need killing with lots of guns and various traps. also there are a lot of fun puzzles and the occasional mild jump scare for some laughter. it's really big fun.
obviously this game was designed for 4 players co-op multiplayer but playing alone works perfectly fine and you get the full experience. that's not an easy feat to pull off.
however multiplayer with either friends or strangers will obviously provide more fun, action, chaos and carnage but it's not mandatory. there are different characters with different abilities and various weapons to choose from.
sadly there are no custom or randomly generated maps so replay value is kind of questionable.
the game has 9 missions + 3 dlc missions and each of them takes 60 to 90 minutes on your first attempt depending on how serious you are about exploring. plus multiplayer, highscore hunt and survival mode but if you don't care about any of that it's game over after around 20 hours.
i replayed most of the game in multiplayer mode with my friend and went for 100% achievements and ended up at around 48 hours. but that's really the upper limit of what you can expect from the game unless you are totally hooked on its multiplayer mode. which i doubt since you can't replay the same maps forever without getting bored after the third time or something like that.
still, all in all this is a very good game and well worth the money. as long as you get it for a more reasonable price...

Strange Brigade was....a lot of fun. In fact, I found myself chuckling throughout, when I wasn't outright laughing, with some interludes for fierce swearing at the screen. I've actually owned this for a while, but never got around to playing it until just recently. I kind of regret that. I know the player base was much higher in its heyday, and co-op is definitely the way to go if that is available to you. However, I would say I played about half the maps solo, and I had a lot of fun with that as well. So, YMMV in that regard.
Story
You play as one of four (with the base game anyway) members of the Strange Brigade, a sort of paramilitary/paranormal investigator/Indiana Jones style group, dedicated to finding ancient relics, new magic, and fighting evil along the way, and in the most cocksure fashion lol.
The characters are all pretty awesome. They're also all hilarious, irreverent, and generally arrogant as well lol. There is a lot of interaction between characters, and the cutscenes always feature fun dialogue. On top of that, they have their version of Charlie or M, a mysterious lady who sends them on their missions. But that's not all. There is also narration, and the narrator interacts with whatever is going on at the time. For me, that was so much fun and was so hilarious. Very much in line with what you get from a game like The Stanley Parable in that regard, but with some James Lipton sprinkled in. Very over the top, almost safari documentary style narration.
The main story features the Strange Brigade trying to stop an ancient demon from destroying the world. In a nutshell. There is also a lot of meta mixed in.
Gameplay
The gameplay is consistent with what you would expect from a game like the Left 4 Deads, Vermintides, etc....the actual gunplay is very consistent with other Rebellion games. There is a small variety of different rifles, shotguns, and pistols. You will carry a pistol and one of the two others. You can also upgrade the guns with a variety of elemental damage, stat boosts and such. Additionally, you have a magic amulet with you at all times, with one of four ability options unique to your specific character. You will eventually unlock all four, but you can only take one with you.
Level design is also what you expect. Some exploration, lots of waves of enemies, some loot, and so on. Some were better than others of course, but all were fun. There was a decent array of enemies as well based on the region, and bosses were pretty fun. Some were more like puzzles whereas others were straight combat. This game also features some tower defense elements, which comes into play when you're in the middle of one of the arena fights in this games. You'll be able to use obstacles and hazards against the waves of enemies...as long as your aim is true lol.
Co-op is really the way this game is intended to be played, and it is a ton of fun whether with friends or randoms. However, as noted before, finding a co-op partner or partners can be problematic with the low player base. It's definitely possible, but i personally had to play about half the campaign solo. That said, it was also fun solo....just not AS fun as co-op. I appreciate that Rebellion included the option though.
Audio and Graphics
The audio in Strange Brigade is masterful. The voice acting is all over the top, pulp style, with a heavy slant in the narration towards appearing to be a nature documentary lol. Each character has a lot of hilarious lines, and the narrator is good for constant chuckles and guffaws. The soundtrack is perfect for the game. All the in world sounds are great as well, and combat is completely on point.
Visually, it is a nice mix of lush environments with cutscenes that feature cool, old newspaper clip/black and white silent film presentation (but without the silence lol). Very steampunk in that pulpy 1920s and 30s type of way. The in game graphics are some of the best Rebellion has offered so far. Lots of cool stuff to be seen for sure. Also, the way each new enemy and every boss is presented as you are first introduced to them or their new circumstances, is always awesome. Sooooo cool in a very noir sort of way.
Verdict
Strange Brigade is really a ton of fun, and it's really a shame that the player base has dwindled so much since launch, but even without the player base, this game is great. This is an easy recommendation, although I'd also recommend buying it on sale given it current matchmaking issues as a result of the low player base. This game will make you laugh over and over and over, the action is there and the puzzles are decent. Give it a go sometime.
If you found this review helpful and would be interested in supporting my Curator group, it would be appreciated. Cheers.

Such a fantastical idea. This sends me right back to my youth, with the serial movies and foreign threats. For you younger ones, this is like playing Indian Jones, or for people of my generation Allan Quatermain. Guns, mummies, loot, ancient tombs and taming the noble savages. Denny Crane.

Was keen in this game from the start. Fun as single player, but much more fun if you can get friends to play too. Basically Tomb Raider meets Stargate. Yes it can be a bit repetitive, but it's still great fun to play.

I like the game but have extreme trouble finds games to join.

Strange Brigade
----------------------------------
Lets start with what matters.
The game is fun !
Its nothing revolutionary and does not re invent gameplay.
But the game is just fun. You will have a blast going trough the ancient temples and fighting hordes of undead. Ranging from mummies to minotaurs.
The graphics are great and art direction is incredible.
The voice acting is really well done. Plus the story teller breaks the 4th wall as much as he can.
A really fun game with fun characters and a 1930's cliche story that gives you a trilling adventure.
Enjoy the Strange Brigade !! Nothing is to weird for the strange Brigade.