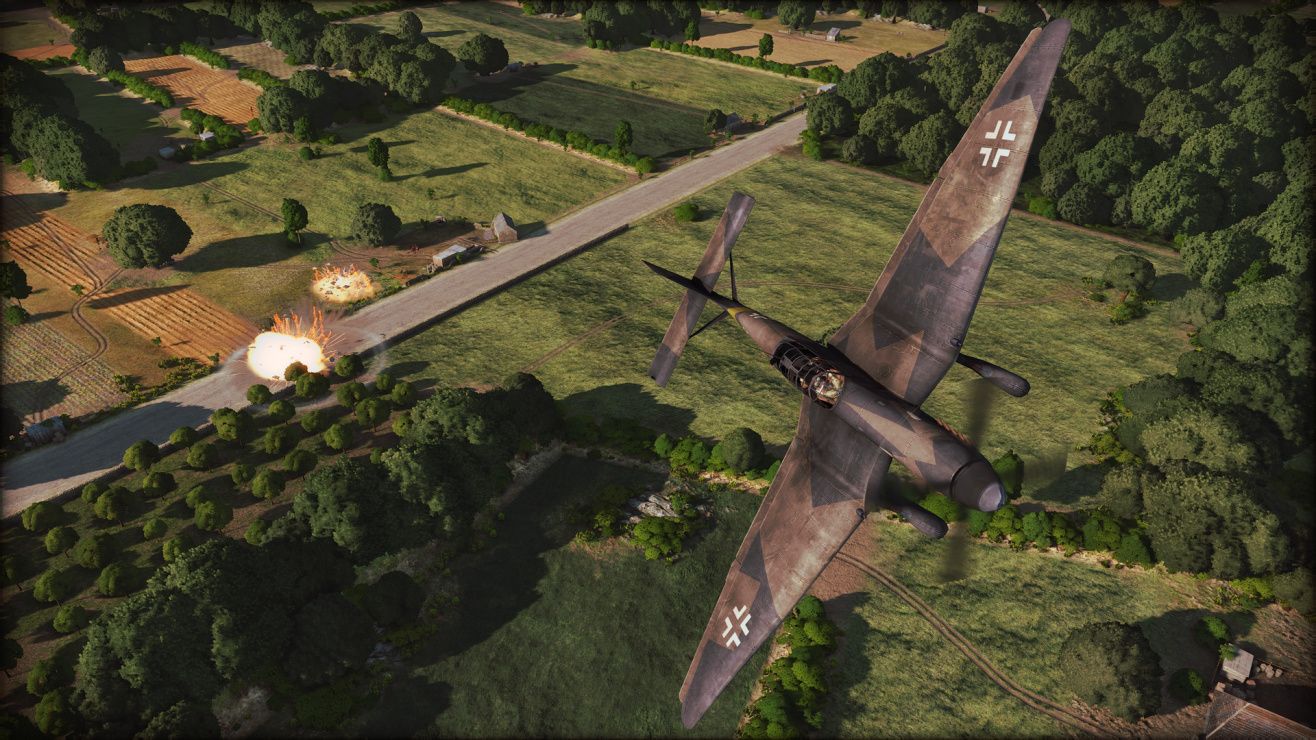 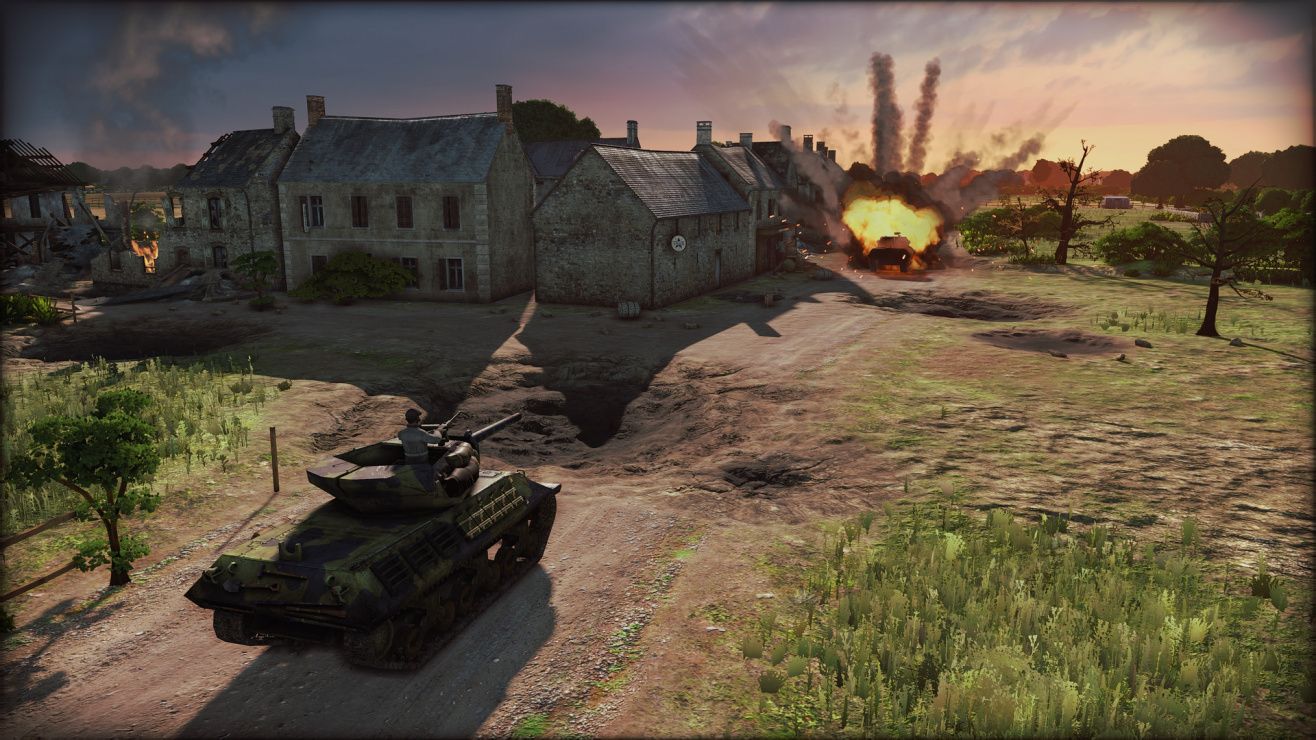 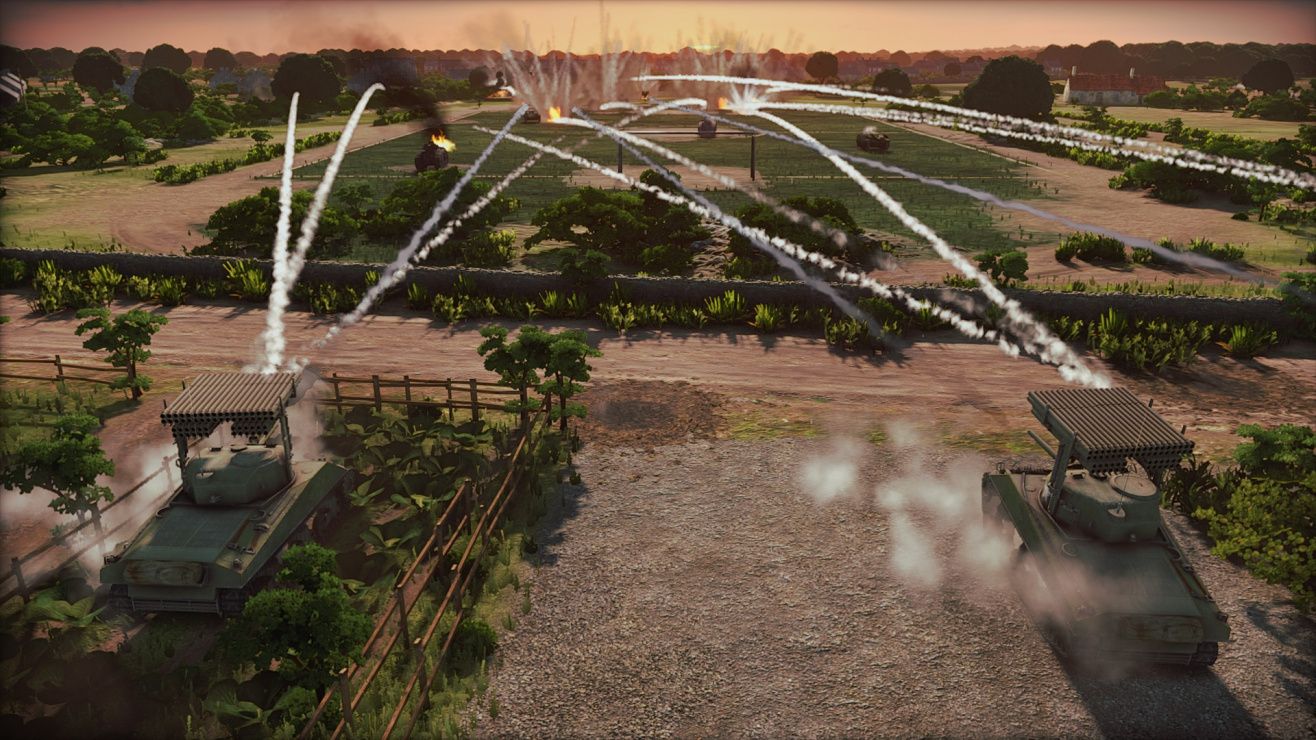 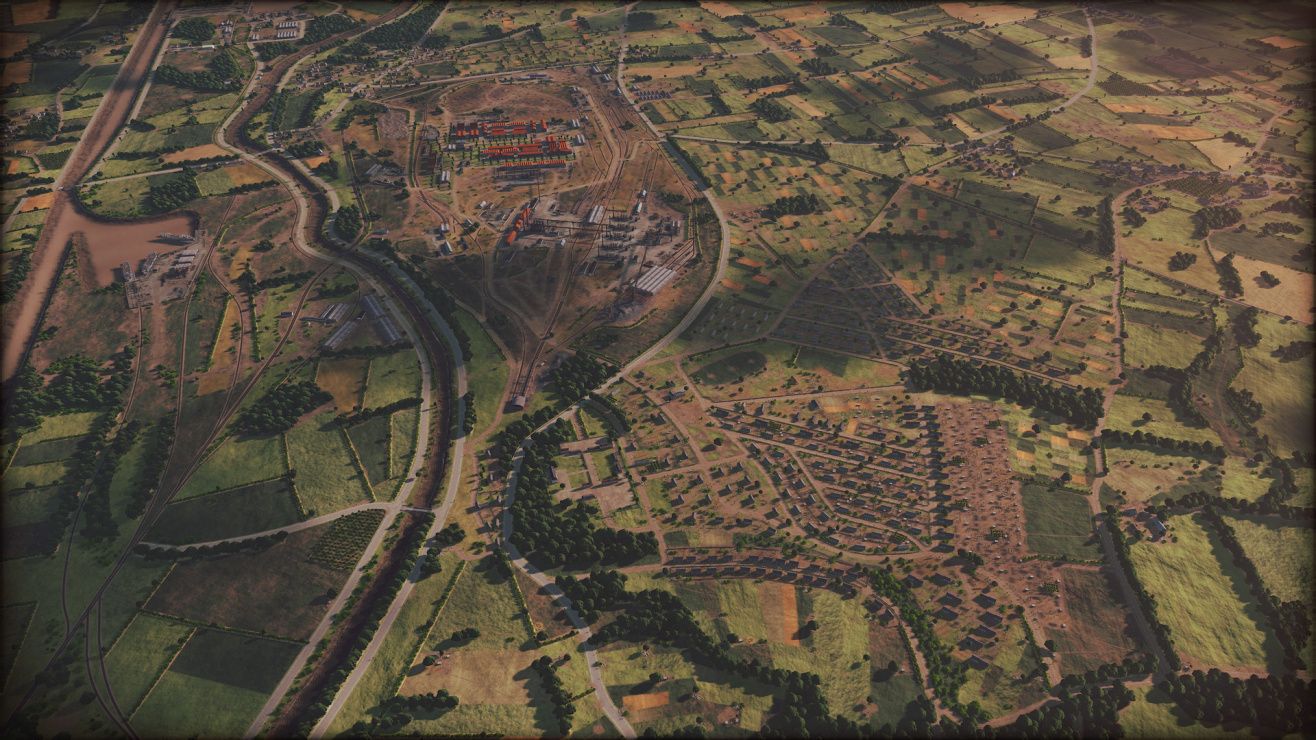 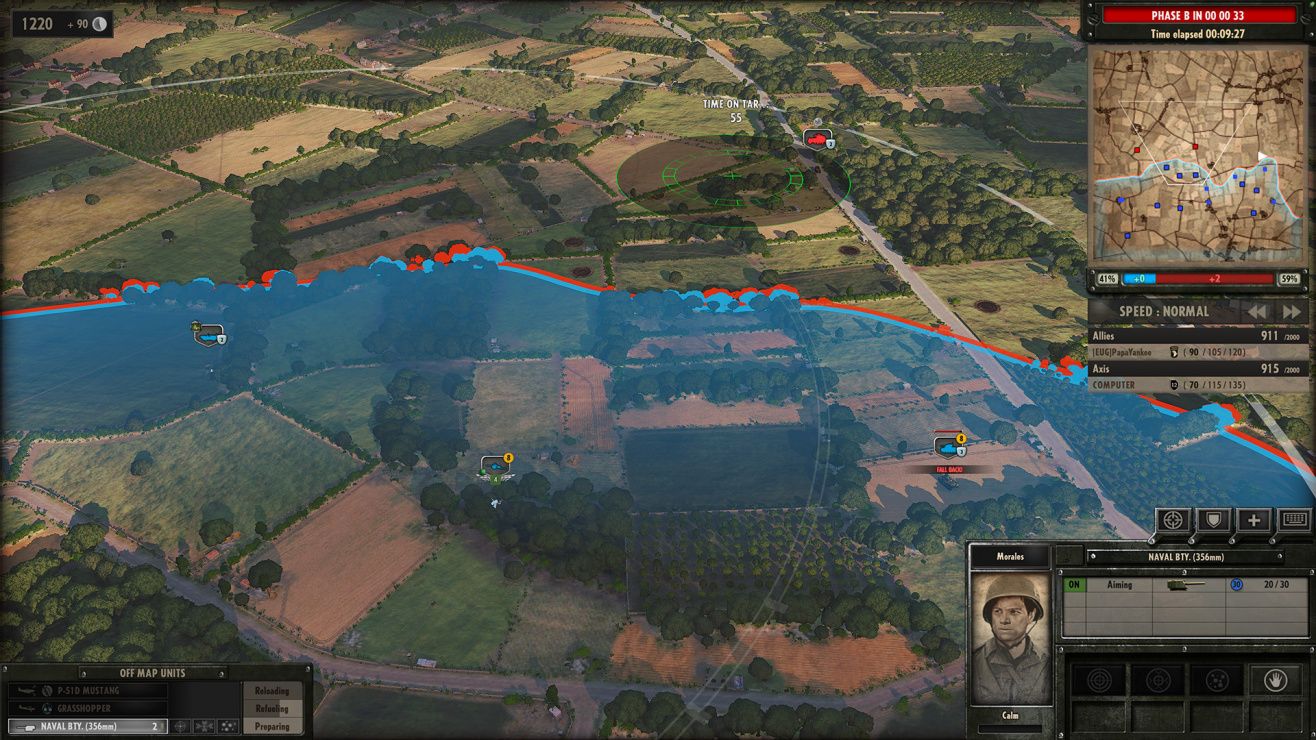 action military rts singleplayer strategy tanks war
Steel Division: Normandy 44 is a Tactical Real-Time Strategy (RTS) game, developed by Eugen Systems, the creators of titles like Wargame and R.U.S.E. This new game puts players in command of detailed, historically accurate tanks, troops, and vehicles at the height of World War II. Players can measure their tactical skills against several opponents in big multiplayer battles or against enemies in a challenging single-player campaign. Steel Division: Normandy 44 allows players to take control over legendary military divisions from six different countries, such as the American 101st Airborne, the German armored 21st Panzer or the 3rd Canadian Division, during the invasion of Normandy in 1944.
Share Share Share
Promote for 50G

An enjoyable WWII RTT, more so I can say than the previous Wargame titles ("Wargame: European Escalation" being the closest in terms of Solo play, but very hard for the casual gamer).
As a WWII RTT (as opposed to RTS where you construct your troops, armour etc as with "CoH") it has more in common with "MoW: Assault Squad I & II" along with it's 3 Phase reinforcement system (you get reinforcements in Phases which is rather a logical system and works much like "MoW: Assault Squad 2"). Rather than get into how this works, as many reviews already do I'll just keep to reviewing the game assuming the gamer already understands the Wargame system that is Eugen's speciality (since it's first outing with the RTS "Act of War" - a still much beloved, and difficult title).
The system of creating your own Battlegroups is far more intuitive in this title than the previous outings and I have actually enjoyed what I have played so far. I have been tied up with W40K games and "Order of Battle" for most of the time since buying this product so have only played two Campaign missions (which are fun), 4 of the tutorials and a few Skirmish. You not only get Skirmish, but Historical Battles as well as the Campaign, added to by the second DLC. Eugen, not previously known for their SP focus have rewarded the Solo play well this time and I think this is the right move in the right direction. MP-focused RTS's fail in the long term, unless wildly popular like "CoH" so it's great to see the return of SP-focused games with MP as an addition.
Aside from that small intro and description, see this as a cross-breed between "MoW: Assault Squad 2" and "CoH 2"...more the former. It's fun, the Phases work well and it's enjoyable to once more romp the countrysides of Normandy. The details when you get up close and personal are the usual Eugen high detail, and with the slower movement of WWII vehicles, you get far more time to zoom in and watch the action.
To finish, I have to say again this title feels far more intuitive with the Battlegroup and new Phase system, more so than Battlegroups of before. That you must create Battlegroups for each Campaign mission after the first is a bonus more than a drag and means for a much more immersive and personal experience.
Altogether a top title, if over-priced as usual and well worth the time of the WWII enthusiast (especially if you are as tired of the Eastern Front as I am....and there's always "Steel Division 2" for that). Maps are bright and colourful; units detailed and equally brightly camouflaged with enough info on their cards to satisfy any board wargamer; gameplay perfected over decades of game development by Eugen and tailor-made for this title.
All-in-all....do yourself a favour.
8/10

Steel Division is built around the Wargame series, but with a few twists. The theme of it is quite inspiring, I don't understand why people hate the soundtrack because it sure as heck gets me pumped for a fight when I launch a large offensive. The AI is smarter too, instead of just spamming units until the player gives in or spams units in return. In this game, you can also give orders to your units BEFORE a match starts, during the placement phase, which helps so much when you're trying to plan how a match will start off!
When I first started, I was having alot of trouble, the same with Wargame, but I discovered I wasn't doing things correctly, I was playing it like Men of War or CoH (not that there's anything wrong with those games). The reason being combined arms is key here, and unlike other games, it's easier than you think. In this game, you feel like you have a reason to use everything. Even SHERMANS are useful here, in the sense that the game takes suppression into account. Sure, a feeble 75mm short-barrel gun isn't gonna pierce the front of a Tiger or Jagdpanzer, but if you have multiple guns, or use artillery, you can scare off the tank, or block its view with smoke, or flank it with anti-tank infantry, you have so many options to approach your situation! Artillery and firepower are crucial when attacking, though caution must also be taken when entering towns or hedgerows, you never know what could be hiding in there.
There's alot of reward to killing a unit or making it surrender, you feel a sense of accomplishment.
One of my favourite things about this game too is that it's historically accurate, the maps are drawn to detail from real aerial recon photos, meaning that your problems were more than likely the same problems faced back in 1944. Not just the maps, the units too! Germans make use of both new, refitted and captured equipment, ranging from raw recruits to veterans, to even volunteers all the way from Russia! The Allies have a mixture of fresh and elite American, British, French, Canadian and Polish troops, all avaliable to you.
This is coming from someone with a mental disorder, I personally feel that this game is way easier to micro than other WW2 RTS's such as Company of Heroes and Men of War. I think the reason being that the camera is zoomed out and while your attention is still required, you can keep an eye on everyone relatively easily, compared to your camera being almost in everyones faces and the only indication of getting attacked is a barely visible pop-up on the screen which by the time you notice your men are already dead :/
Plus the UI I feel is alot friendlier too, and it has the benefit of using the WASD keys to scroll the screen, leaving your fingers much closer to all the hotkeys which will make your life easier.
Apparently all people care about is gameplay so I saved the graphics for last. They're pretty good. For a game that has your field of view kilometres up in the sky.
Oooh, and another favourite thing of mine is. The game is split into different battle phases, A, B & C, each 10 minutes apart which unlock better units in your deck with each phase, adding another layer of uniqueness to the divisions/battlegroups. And this ALSO gives balance to the game. Come on, let's be honest here, with the way that this game is designed, if you're unable to kill something, then it's your fault :/
Can't kill a Tiger or Panther rushing your frontline? Make use of the terrain and ambush with anti-tank guns, call in the airstrike, use smoke. Remember you DON'T have to kill everything, as long as enemy units are scared, they're not a threat to you, and if you ask me, that's a good way to balance things from a historical perspective ^^
Overall, the game is very fun and rewarding to play, no doubt new players will find it challenging, which is why I recommend playing the campaigns, which teach you about using the terrain, making use of what you have and unit preservation. If you want the most historical RTS ( including swastikas and SS units ) on the market, then this is it.