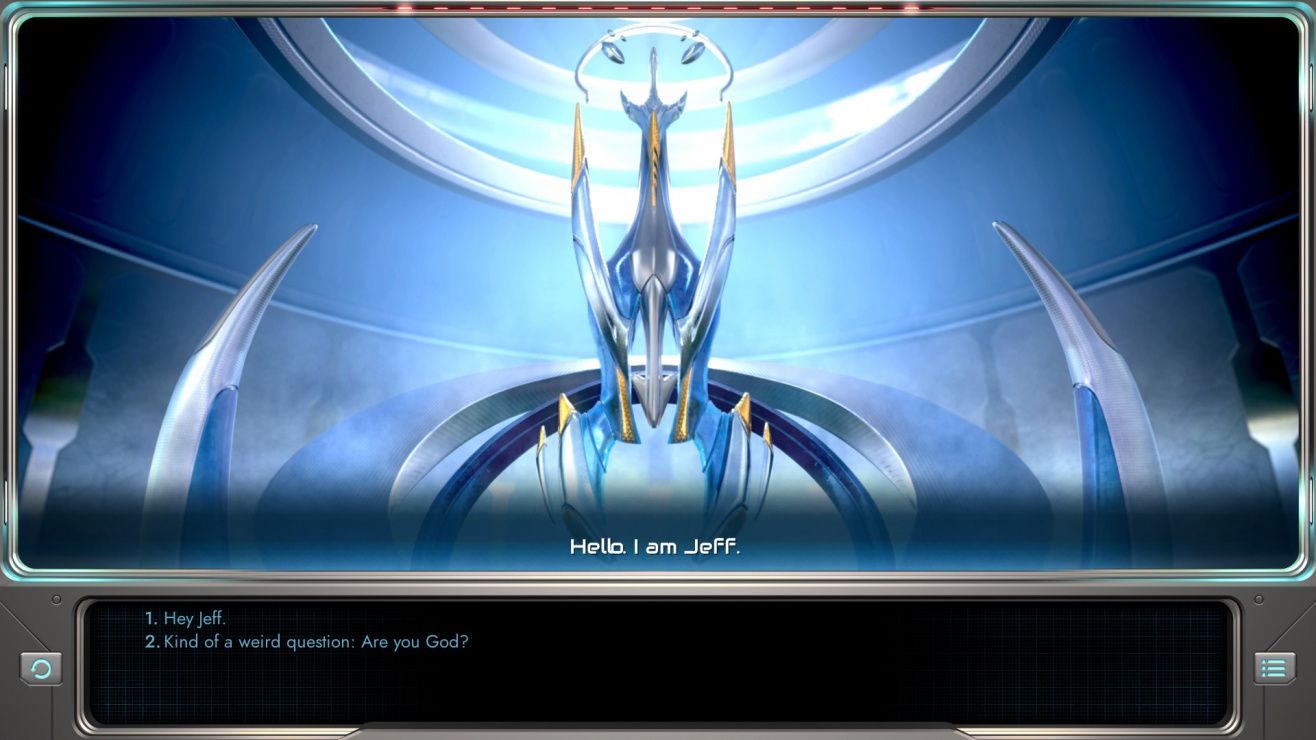 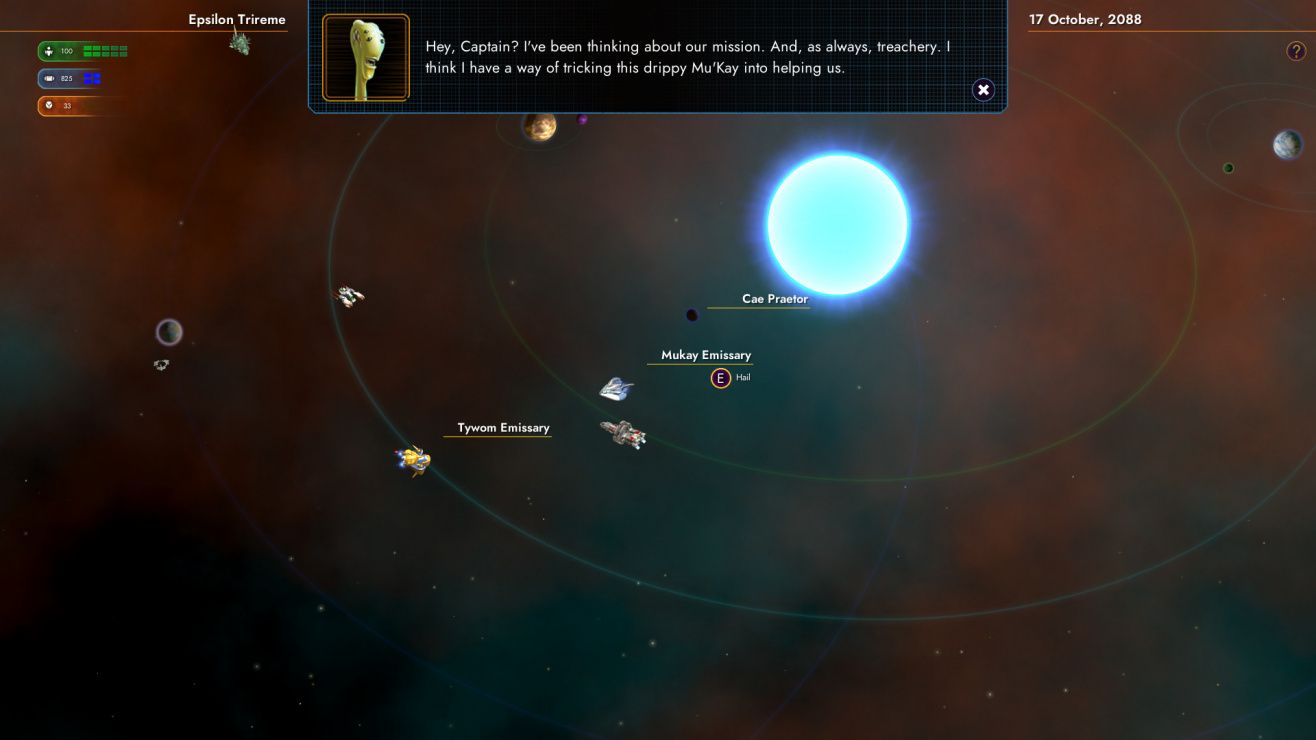 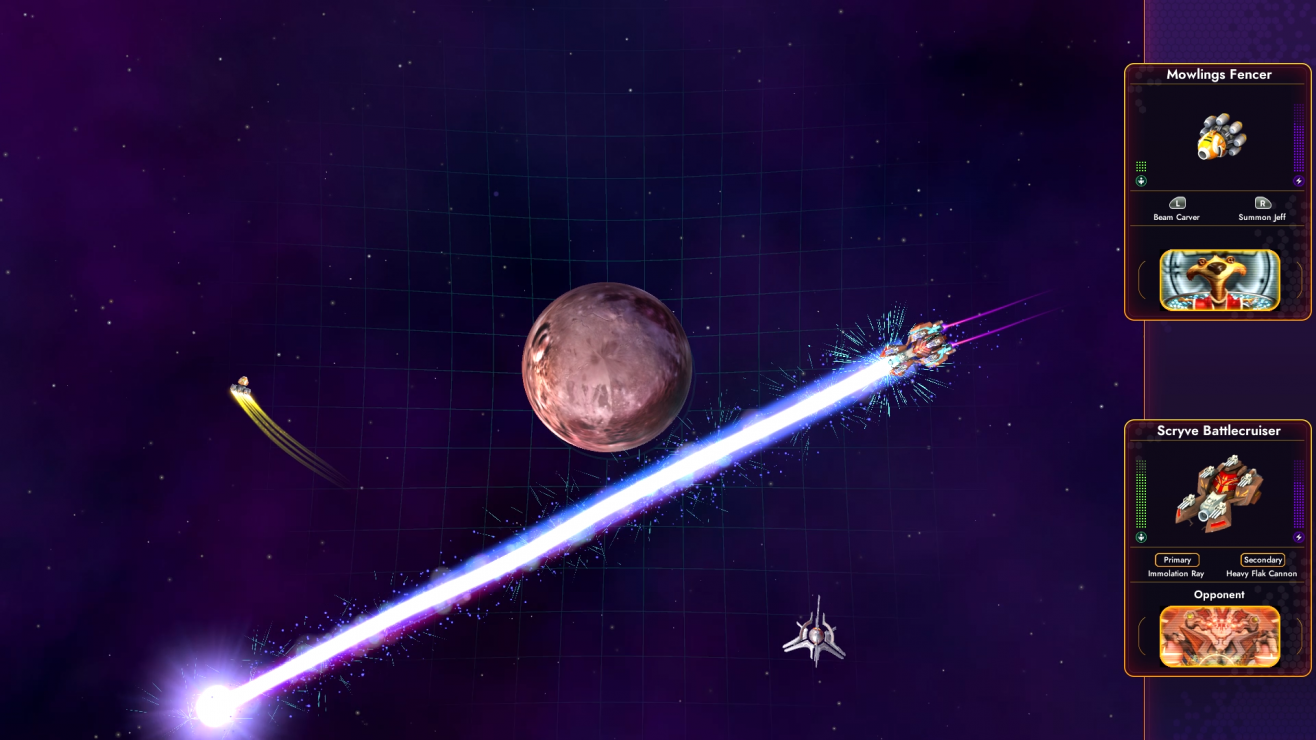 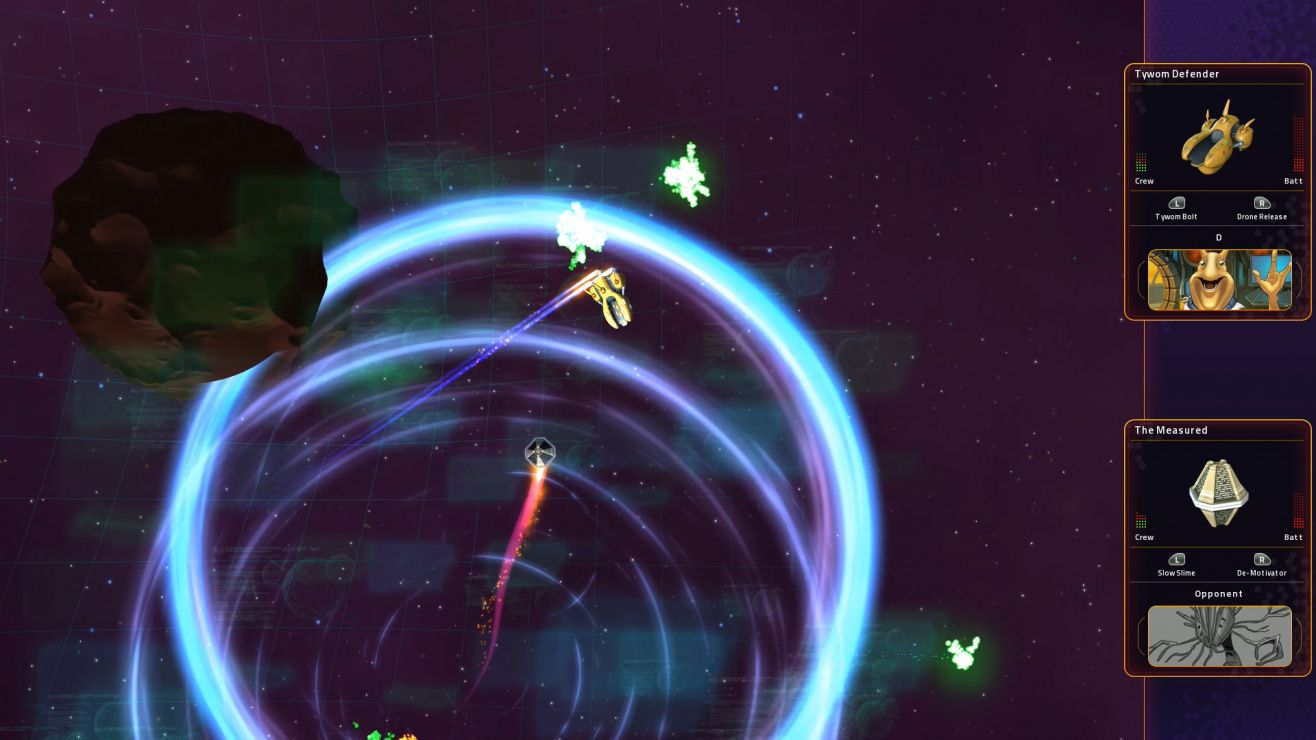 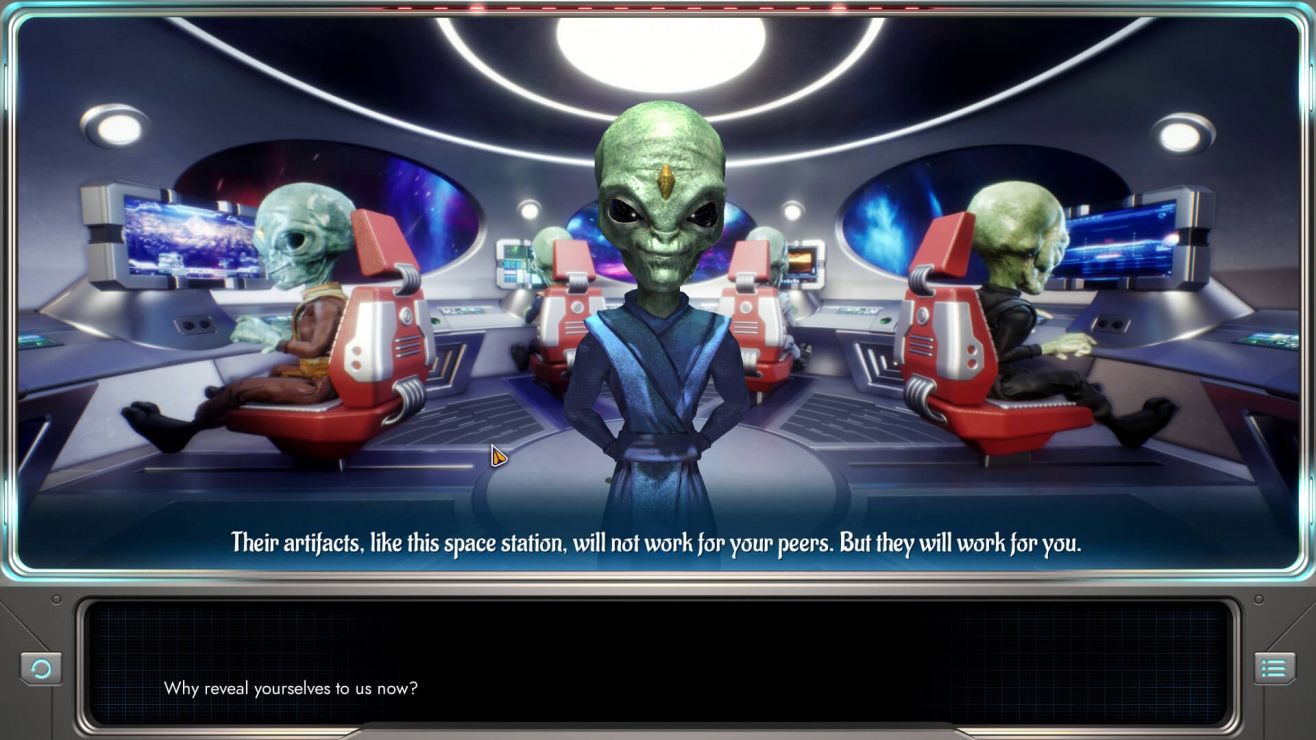 adventure exploration multiplayer rpg sci-fi singleplayer space
Welcome Aboard Welcome to Star Control, Captain! You’re here because you’ve shown exemplary service, aced all your flight exams, and - most importantly - passed all the sanity tests. Humanity has learned that it is not alone in the universe and that we are hopelessly outmatched by alien civilizations seeking to destroy us. You have been selected to command Earth's first and only interstellar starship to accomplish this - try not to break it. It was expensive. Your mission: Save humanity, Captain. At all costs and by any means necessary. A Vast Universe Set in the year 2088, humanity has discovered it’s not alone in the universe. Worse yet, it is catastrophically unprepared to deal with what's out there. In response, Star Control is formed and the player is selected to command the crew of the U.E.S. Vindicator. Star Control: Origins takes place in a huge living universe just waiting to be explored.
Share Share Share
Promote for 50G

I'm 25 years older than when I played Star Control 2, so maybe that's why I didn't think it was as good as the original. However, I did finish it, which is more than I can say for most games I play. That has to count for something.
It's thinner, but more playable.
One major difference the decades have brought: no sexy lady aliens in suspiciously phallic ships. 👍
I played for about 28 hours. I could have shaved a few hours maybe, but I don't play games to rush through them now do I?
I found my enjoyment in the silly aliens and their ineptitude, and trying to use the various ships effectively in combats.
The game does a decent job of keeping you occupied in-game, but don't worry too much about collecting minerals unless you find a decently rich planet (there's a value summary above the list of minerals, I missed that for a long while).
Make sure you get the scanner as soon as you can so you don't have to hunt around for anomalies in systems.

I don't know when or how I got this game (I assume it was in an indie bundle), but I put off playing it for a long time, then finally decided to play for like thirty minutes and then idle for trading cards. Next thing I knew, it was hours later, the sun had set, and I'd discovered a game to fill the hole that Mass Effect left.
And it's strange, because I actually don't really like the gameplay loop all that much. Fly through space, get to a solar system, land on a planet, mine resources, explore, get into a spaceship battle, lather rinse repeat. I'm grateful for all the autopiloting mechanics simply because I don't really want to bother with it.
"But Sci," you may ask, "if the gameplay loop sucks, why do you like this game so much?" Because the character design and story/dialogue more than make up for it. Seriously, holy crap. The story and dialogue balance silly and serous just right, creating an intriguing narrative that never takes itself too seriously to be depressing but also seriously enough to never be obnoxious.
And the character design, as I mentioned, is OUTSTANDING. There's no lazy-ass "person in blue paint" type of aliens here. The very first alien you meet is a four-armed friendly-but-awkward slug, and the designs get weirder from there. Long-necked four-eyed green-skinned swindlers who lie for fun. Buff cyborg furries who are genetically conditioned to follow orders to the death. Eyeless artisan snakes who enjoy devouring sentient species. Vacuum-dwelling jellyfish. Sentient viruses. The aliens are so unique and creative, and each one is such a delight to encounter. Even the super evil ones. Just wanting to discover more of them and their cultures made me keep exploring the universe.
I should mention that I've never played the other Star Control games, and looking around it would seem that folks with heavy nostalgia for those games find this one lacking. So if that's the case, then maybe not. And if gameplay is more important than story or characters to you, then again you might not enjoy this. But if exploring weird alien cultures is exactly what you've been needing, then I cannot recommend this game enough. 10/10, would get called sexy by a slug again.

Star Control: Origins is a strange game. From what I've seen, older players dislike it because it was not enough like the original games and newer players couldn't quite understand the appeal of recreating an over 20 year old game system. I'm a bit in the middle. For one, I'm not old enough to have played the original games when they first came out, but I did play them later because I was one of those weird kids who liked retro ms-dos gaming. To be honest, they were good, never got to finish them due to some compatibility issues, but I did enjoy them. I don't think they were as amazing as some of the older fans say they were, but I can see and appreciate what the developers were aiming to accomplish and the efforts they placed into this game.
I read a lot of people complained the game wasn't as funny as the original, but I honestly liked it. I found the jokes and story somewhat clever. Not a comical masterpiece, but I enjoyed my time playing it. Of course the game doesn't have the same humor as the original released in bloody 1990. Times have changed, the story has changed and evolved, old references no longer apply, our cultures taste in humor has changed. I understand the desire to preserve the dignity of the original, but Origins isn't an insult or even a bad game. It tries very well to recreate the original story with new elements. The writing team clearly attempted to give each species a unique personality in their dialogue and mannerisms. There is effort and love here.
Does this game have problems? YES, I won't lie and say it doesn't. There are lots of video glitches when you talk with aliens. I've had backgrounds that failed to loud, spoken to black screens, had a few audio hiccups, etc. The glitches do exist here and there, but they're pretty rare and none of them are game breaking from my experience. I think the biggest problem people had was they weren't sure what type of game this was with it's conversation choices and its somewhat open world style galaxy. It might come off as some kind of grand open galaxy RPG with multiple endings and gameplay choices that greatly influence the story, but no. It's very much like an older game with a somewhat liner story line. Yeah, you can do some things out of order and yes you can influence and change a few things, but at the end of the day EVERYONE is going to the same party. There might be more dead and mad aliens at you, but it's more or less the same. because that's just the kind of game Star Control was and that's just the kind of game they're remaking.
It's not a bad game, just know what you're buying.
EDIT: Forgot to mention some of the achievements are broken. Not sure if they fixed all of them in the last update, but don't be surprised if some of them require you to maybe exit and restart the game or maybe do them twice. It's kind of a bit random at times. Not enough to take away from the gameplay, but it should be noted.

Yes!
I have to admit, at first, I couldn't get into this game.
I found the main storyline somewhat... unimaginative and corny.
We've seen this a million times before -
Some advanced alien civilization that looks like Predator banged some Aztecs doesn't like your face and wants to kill you before you start crawling your noob butt across the stars because.. reasons.
But! Then I started faffing around the galaxy talking to aliens.
And guys, that's the main thing here.
This isn't some grand scheme tactics super serious 4x game.
It's a light hearted comedic let's talk to aliens and have some space pewpews inbetween.
This game doesn't take itself very seriously. But it works.
The good:
1. Dialogue - Pretty damn good and funny. Each alien civilization's personality really shows.
2. Voice acting - Surprisingly well done! Every alien has their own weird little accent and personality.
3. Music - Can we talk how friggin amazing the music in this game is??
4. Combat - Well it's...ok. Arcady and fun for the most part.
The bad:
1. Overall storyline - Well..."We dont like your face, die!". But! There are some interesting moments there within alien interactions.
2. Planet landing mechanics - Gets really annoying really fast when you have to drive around in no physics world collecting shiny things.
3. Quests can get really repetitive and boring but once you get those out of the way...
4. In-orbit flying mechanics - GAAAH! The worst thing in this game. You snail your way across the solar system every time you enter orbit. Soooooo annoying!
So as long as you know what to expect - A light hearted space exploration game with quirky aliens, you're good.
Get this game. Worth it for the music alone.
NOTE! - Stay away from the DLC 'Earth Rising'. It's utter crap.

Summary: *Almost* as good as star control 2. This is a good game and worth playing.
The writing is good, the plot is relatively interesting and well-paced, and there is plenty to explore.
The game stumbles a bit in the combat, mostly in that the limited size of the arena feels wrong and that there's a lack of sound when shots impact. The sound thing might seem trivial, but there is a lot to keep track of visually, and being able to hear when you hit something (and how hard you hit it, as was the case in SC2) would have been a nice quality of life improvement.

I'm rubbish at reviewing things - I meant to give this a positive ages ago.
It is an utter joy from beginning to end. One run through is my hours played (as recorded 30th July 2019). So well worth it on full price and on discount it's an absolute steal. No grind. No boredom. V well written and very fun mechanics.
There is nothing to not love about this game and it will be one I replay every couple of years or so, I suspect forever.
They did good bless em